DIY Workshop: How to create a double-neck banjo/guitar hybrid

No, you are not seeing some kind of error; this double-neck banjo/guitar behemoth really does exist. Read on to find out how – and why – the Countrymaster came to be. 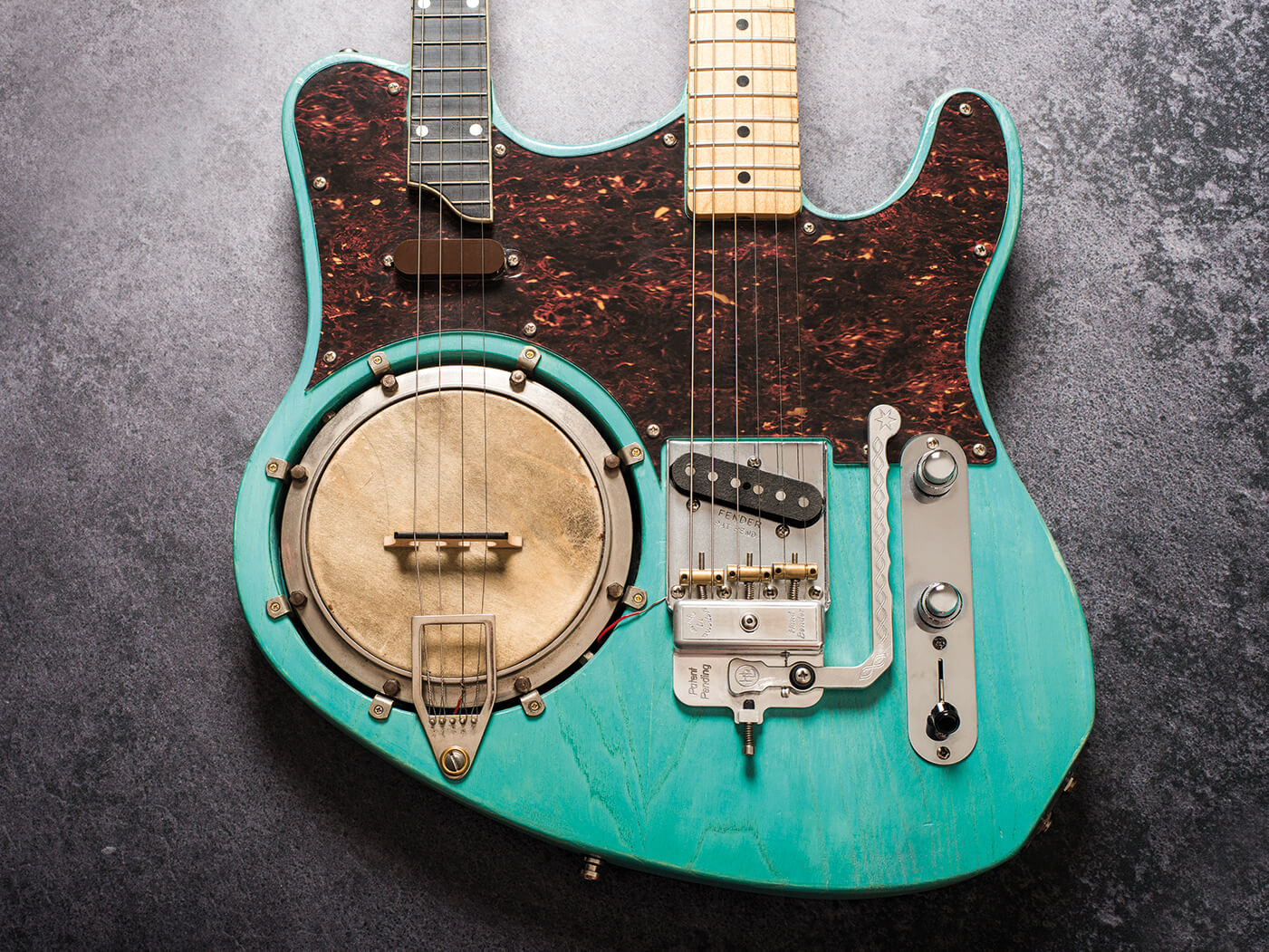 Brad Paisley… It’s all Brad Paisley’s fault. You can blame him for the existence of this beast, if you find the need to blame anyone. When I first heard Paisley’s music I knew I liked it, but it was when I heard The Best Thing That I Had Goin’ that I was smitten.

I think it’s officially my favourite song ever, having listened to it probably 10 times a day since I first heard it a few years ago. It contains many of my favourite musical elements: bluegrass, country, cracking guitar licks and… banjo. And, as is my way, I decided I wanted to play this song in a band. I wanted to play banjo over the bluegrass intro and guitar in the rest of the song. 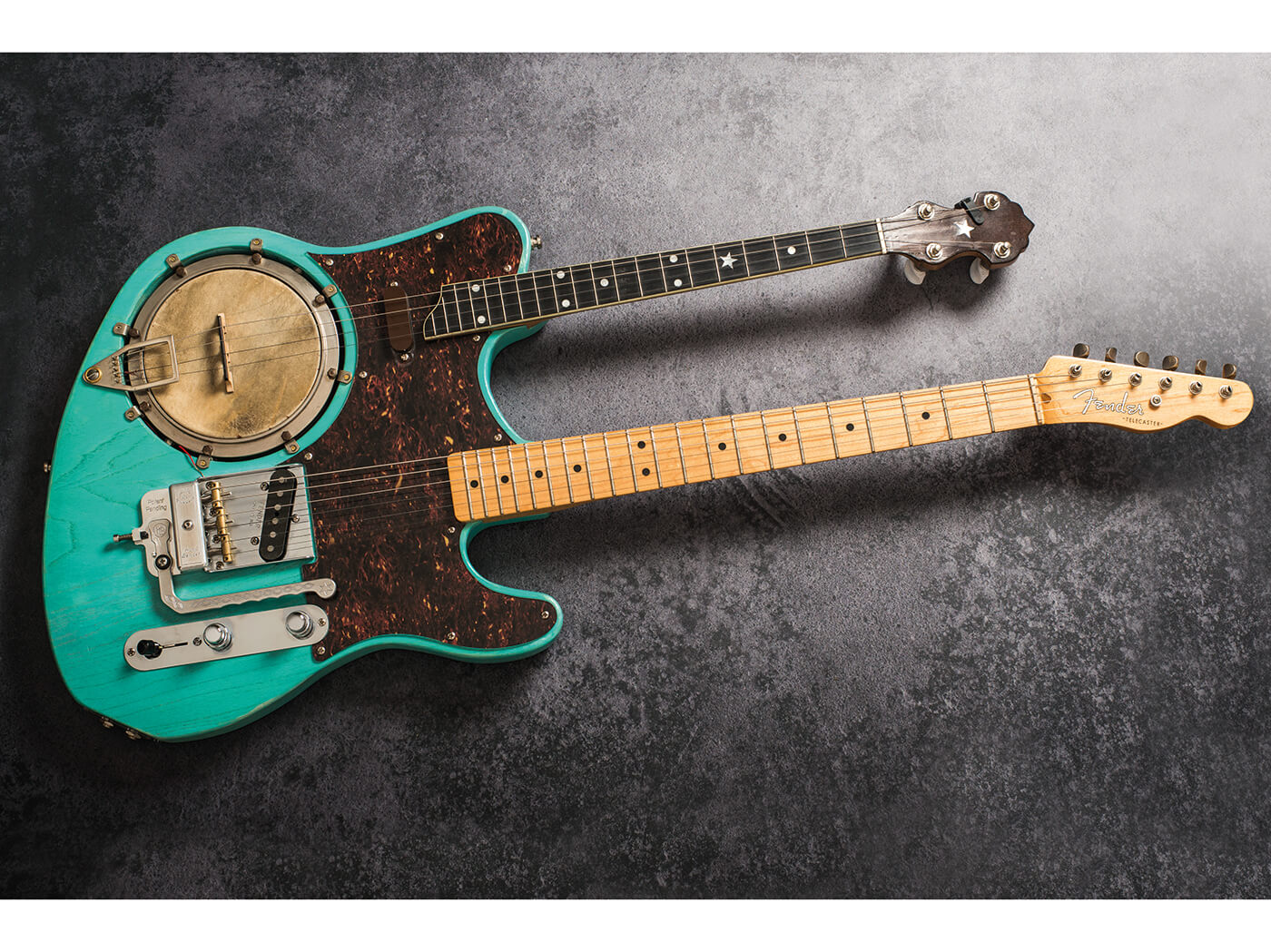 My initial idea was to sling my Tele behind my back, Springsteen-style, and play banjo for the first verse and chorus, before casting the banjo aside and grabbing the Tele for the remainder of the tune. But this of course presents many problems… not least that I don’t have the luxury of a guitar tech to grab the discarded banjo.

So some dark part of my mind happened upon the idea of two instruments in one. Not unusual in itself, the 12-string/six-string combo is firmly embedded in rock ’n’ roll history, and mandolin/guitar double-necks are relatively frequent visitors to the country-music scene. But a banjo/guitar pairing? I’d not seen one. Is it possible? Could it be? Should it be?

The nail in the coffin was when I happened upon a band whose banjoist was plucking upon an electric banjo. I’ve seen these before, but this particular one had a small six-inch banjo head (the drum-like skin under the bridge, traditionally 11 inches in diameter) which would not be unwieldy on a double-neck body. I basked in a brief light that yes, it would be possible! 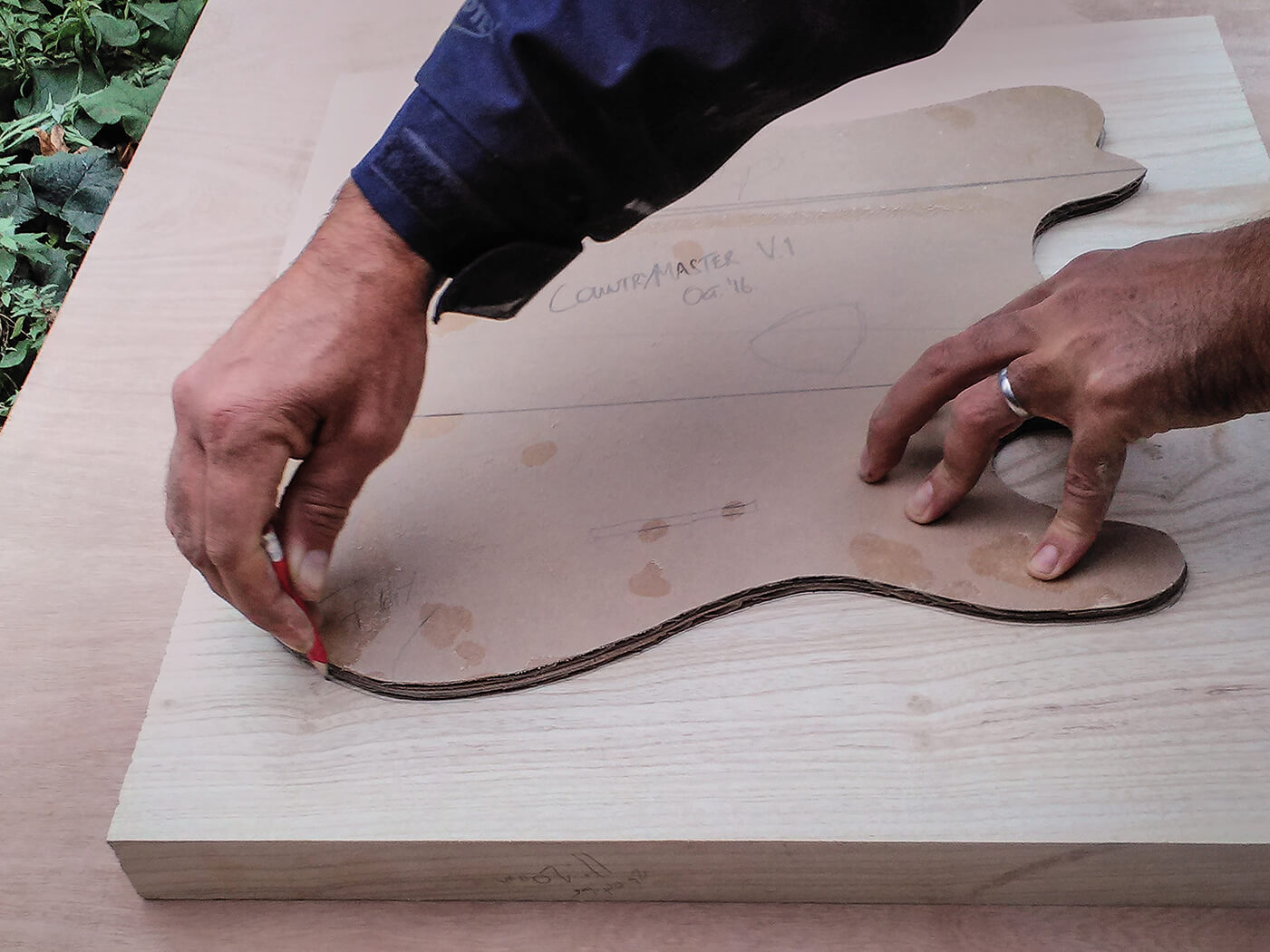 Stage one involved many hours of Googling and just plain, good old-fashioned thinking. How the hell was this going to work? The more I thought, the more details cropped up – neck angles, bridge height, string tension, string break angle, pickups, wiring… the list goes on.

First things first – I drew an image of what was in my head. To keep it simple, I wanted a single-pickup Tele on the bottom half (or Esquire, technically), and the banjo was to have a single pickup, too. That way, I could keep the controls to a simple, Tele-style set up: one three-way switch to select either/both pickups.

I pondered the electrics for some time before enlisting the help of guitarelectronics.com to draw me a wiring diagram. Result: volume and tone per pickup (on stacked pots) feeding each pickup to a separate output (guitar to amp, banjo to PA) and a three-way switch as described above.

Next up: sourcing that small banjo head. This was a deal-breaker. If I couldn’t find the right thing, the project would fall on its arse. I had wondered about taking a banjolele and removing the neck, then somehow installing the whole ‘pot’ (banjo head assembly) into the guitar, but this felt unnecessarily cumbersome.

The answer lay on eBay (doesn’t it always?). I found an early 20th-century banjolin (banjo-mandolin hybrid) with a six-inch pot that simply dropped into a circular cavity and screwed in from the top. Perfect – I could rout out a hole in a solid guitar and drop it in! 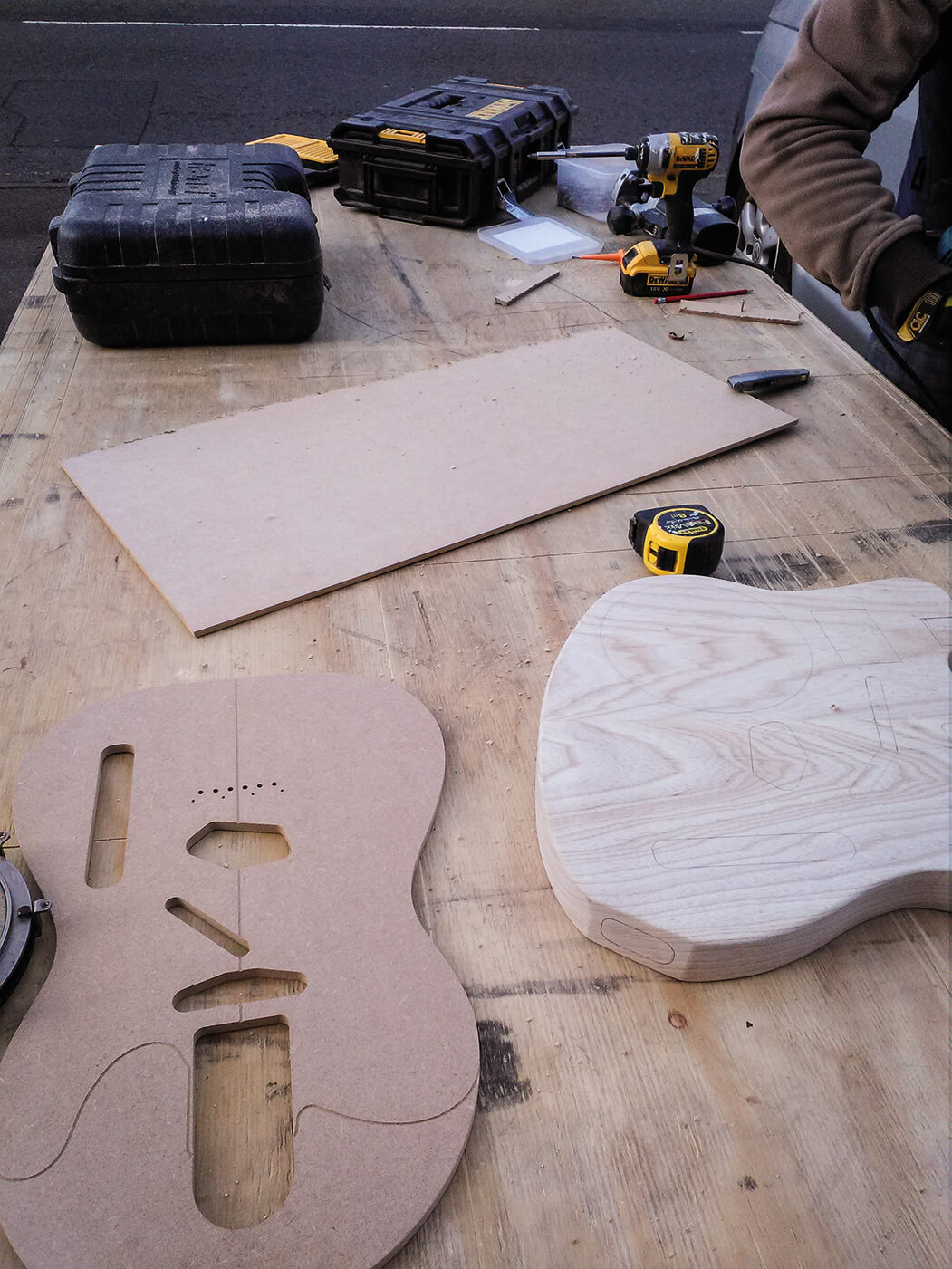 But what about the neck? Luckily, I have a chum who’s a banjo player and all banjo players have a ‘banjo guy’. So I ended up in an industrial unit in a back street of Camden in the workshop of John Alvey Turner. I explained my requirements to Philip (current proprietor) and he rummaged in a hessian bag of necks and drew out an old Vega piece (or possibly a high-quality repro) and said: ‘Like this?’”

“Yes,” I said, “just like that.” It was a short-scale, four-string tenor banjo neck, maybe 100 years old, with an ebony ’board and beautiful rosewood overlay on the headstock. I also liked the star inlays.

I had thought of getting a five-string neck, but I figured I’d be flat-picking anyway (because of the guitar element), so I opted for a four-string, tuned to G, as on a five-string.

This old banjo neck was destined to be sullied: I sawed off the heel to make it a bolt-on neck. But I did keep the rosewood heel cap to use as a neck plate. Being old, the hide glue melted easily with an iron and a damp tea towel, removing the cap with no damage. 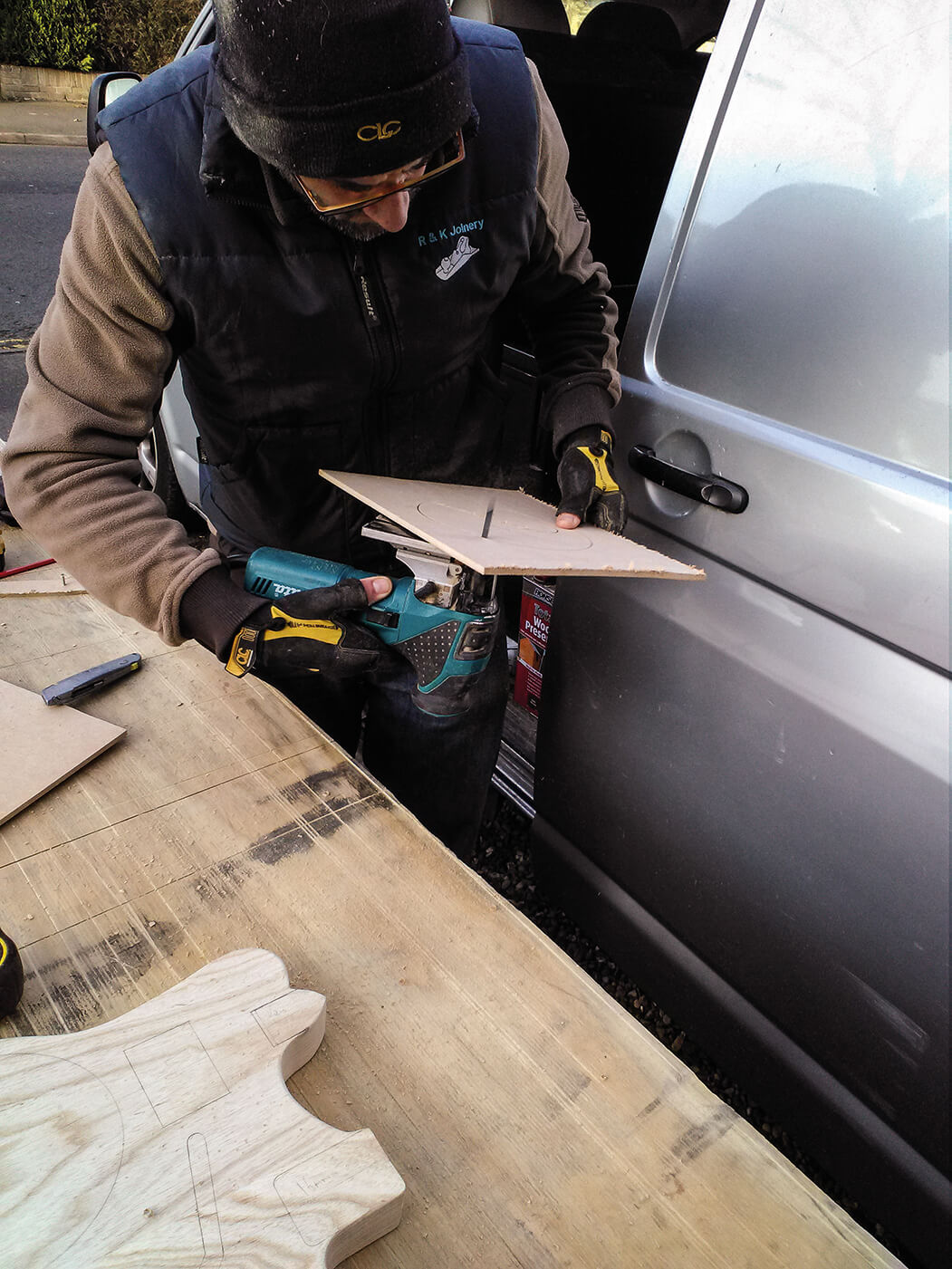 For the Tele side, I acquired a neck from a Fender Baja Tele – a wonderful fat thing with a soft V shape to it, 9.5-inch radius and medium-jumbo frets.

Next biggie: building the body. I’ve built guitars before, but always from parts. I’ve never had to build a body from scratch. I found a company that sold timber intended for guitar building and it selected the lightest slab of swamp ash it had for me. After having it planed and squared, I enlisted the help of my friend Ricky, a fine carpenter, who cut the slab in half and glued it together to form a body blank.

I used a Tele template for the bottom half of the body, but the top half was all freestyle. With the help of a set of French curves and compasses, I finalised the design and created a cardboard template.

Using this template, Ricky cut out the body shape for me. I then smoothed off the edges before heading back to his place to utilise his routing skills. Again, I had Tele templates for the bottom half but the top was all freestyle.

From this point, everything was relatively as you’d expect – it went together like any Tele-type home build, much to my surprise. I had fully expected to encounter issues on the banjo side with the neck angle and the bridge height, but everything was great straight away. 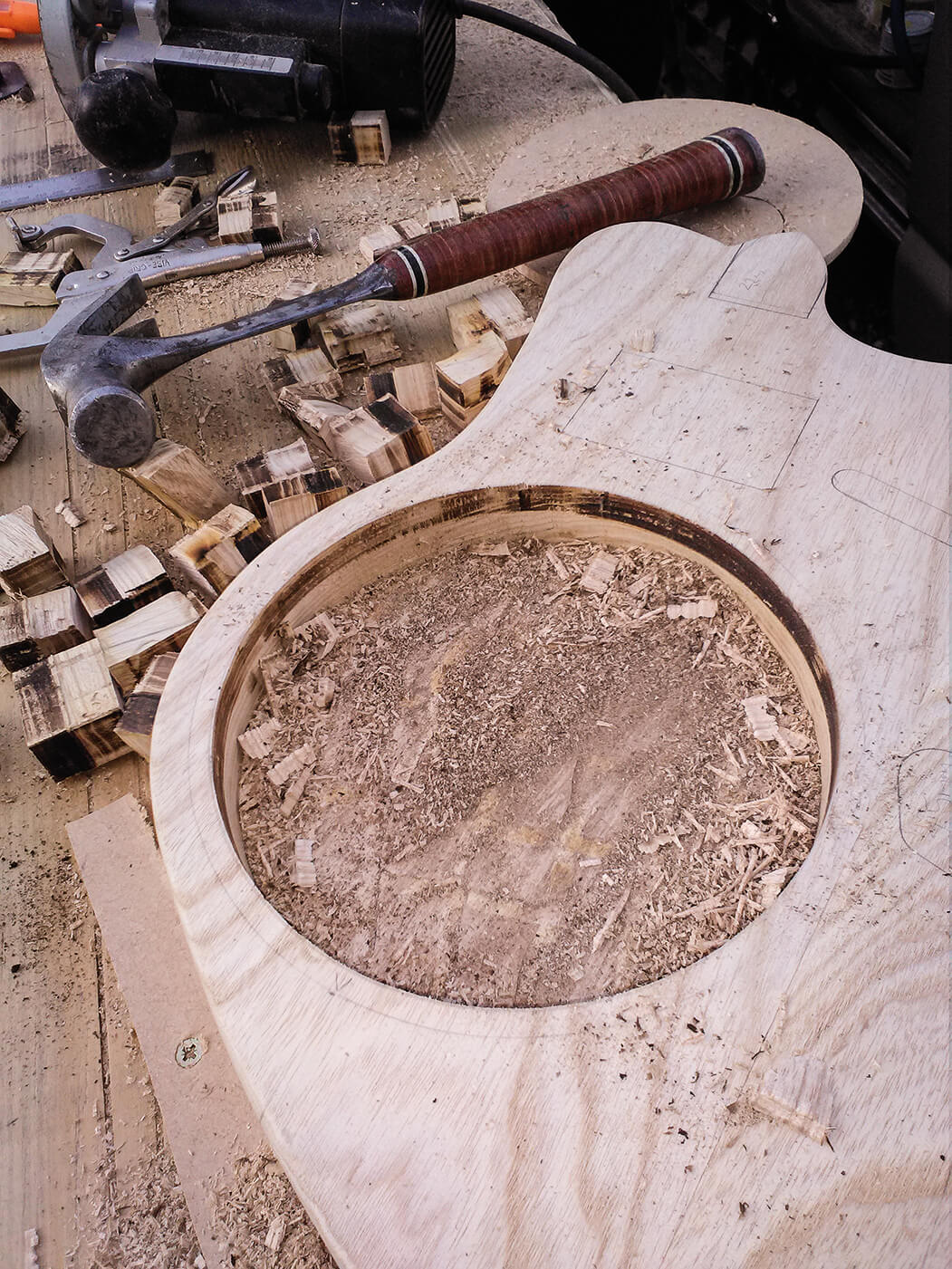 I had sourced some hardware from the Camden industrial unit: a bridge, tailpiece, vintage tuners, all of which did exactly the job required of them. Once I had roughed together the parts, I was able to draw a template for the pickguard, which I had made by Scratch-It!, with a fine tortoiseshell pattern.

For the finish, my original intention had been to give this already ostentatious beast a silver-sparkle paint job, with pearloid pickguard, but the grain of the ash was so nice I felt it a crime to cover it up. Wood stain was the way forward: I selected a shade similar to Fender’s Surf Green (actually called ‘Beach Hut Blue’), and felt the tortie ’guard would complement this nicely. The woodstain was sealed in with a satin varnish for a subtle sheen. 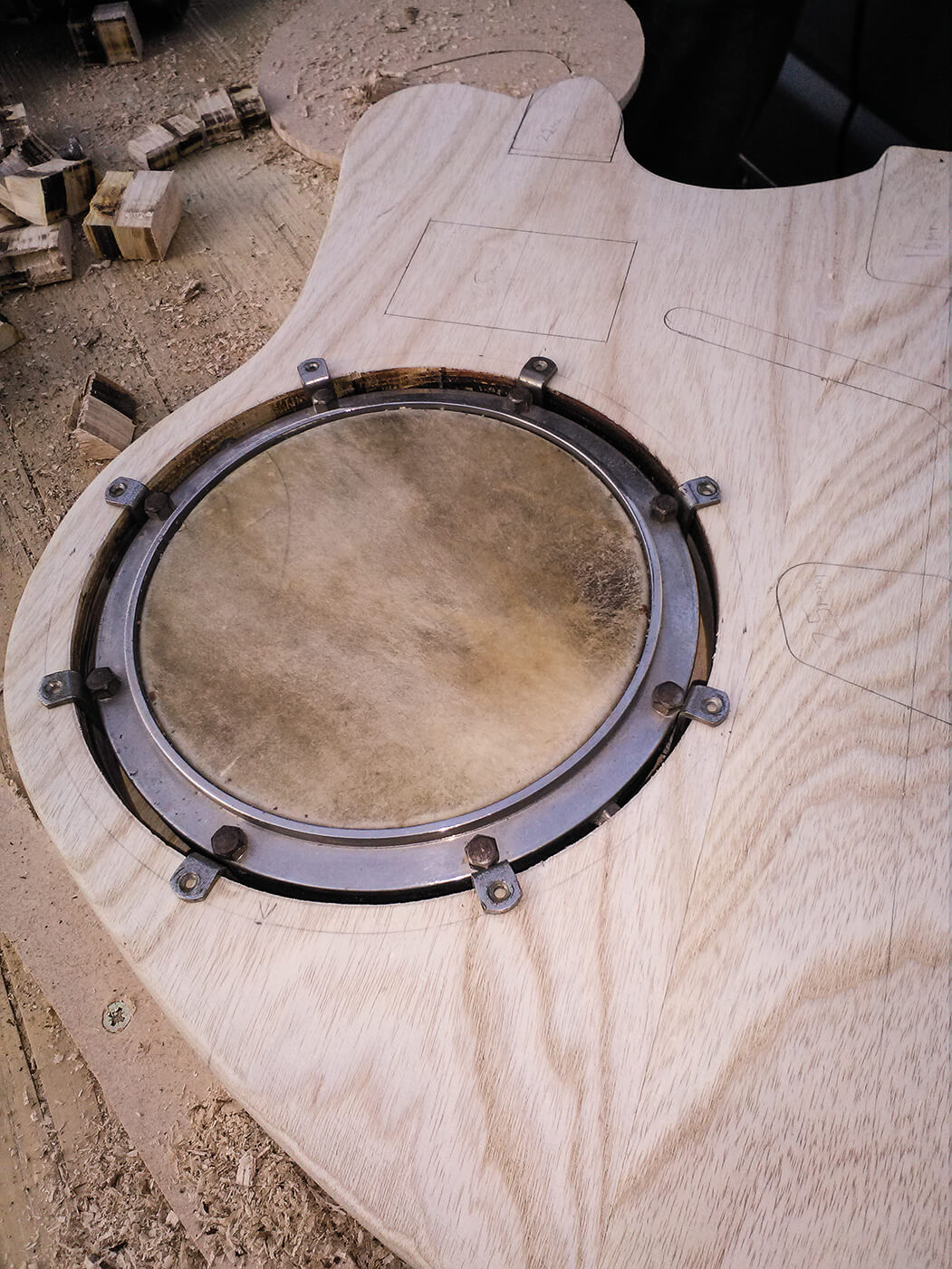 Pickup selection was fairly straightforward: a Fender American Vintage pickup for the Tele bridge position, and a Fender Mando-Strat pickup for the banjo (single coil with four pole pieces under the cover). I had toyed (and still am toying) with the idea of an acoustic banjo pickup in the bridge or under the skin of the banjo, but a magnetic pickup is simpler and so more suited to this most experimental of projects.

The Tele bridge is your common-or-garden vintage Tele unit with three brass saddles (notched to keep the strings from butting up against the grub screws), but I augmented it with a B-Bender from handbendersweden.com – a retrofit item that bends the second (B) string up a tone in the accepted Nashville manner, without requiring a lot of heavy gubbins being routed into the back of the guitar. Thus was the birth of the Countrymaster. 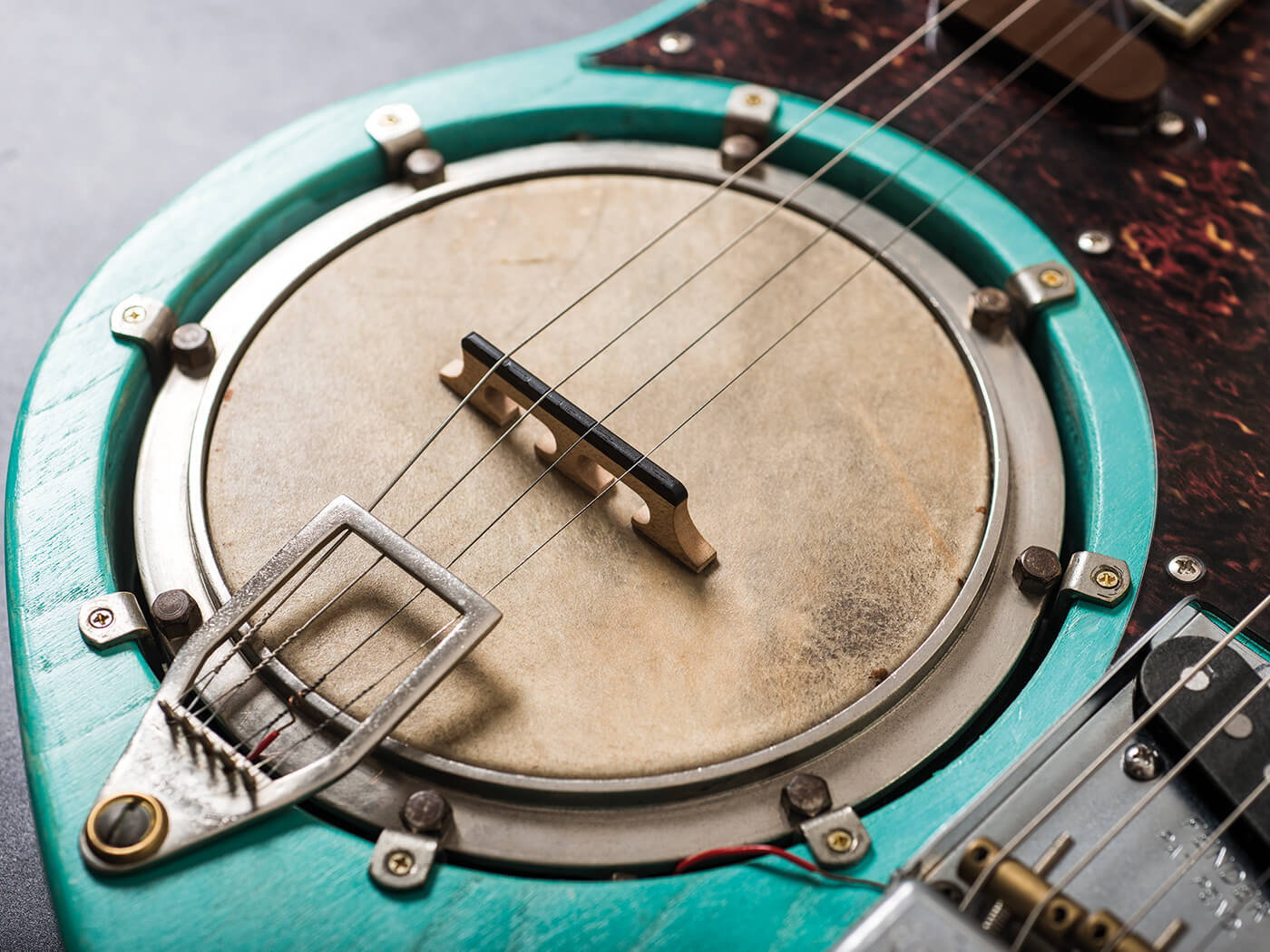 And how does it sound? Well, the Tele half sounds amazing! If you think of that massive chunk of swamp ash working in cahoots with the thick neck and the brass saddles, that Fender pickup delivers proper Tele tone by the bucket load – but somehow thicker and bigger. 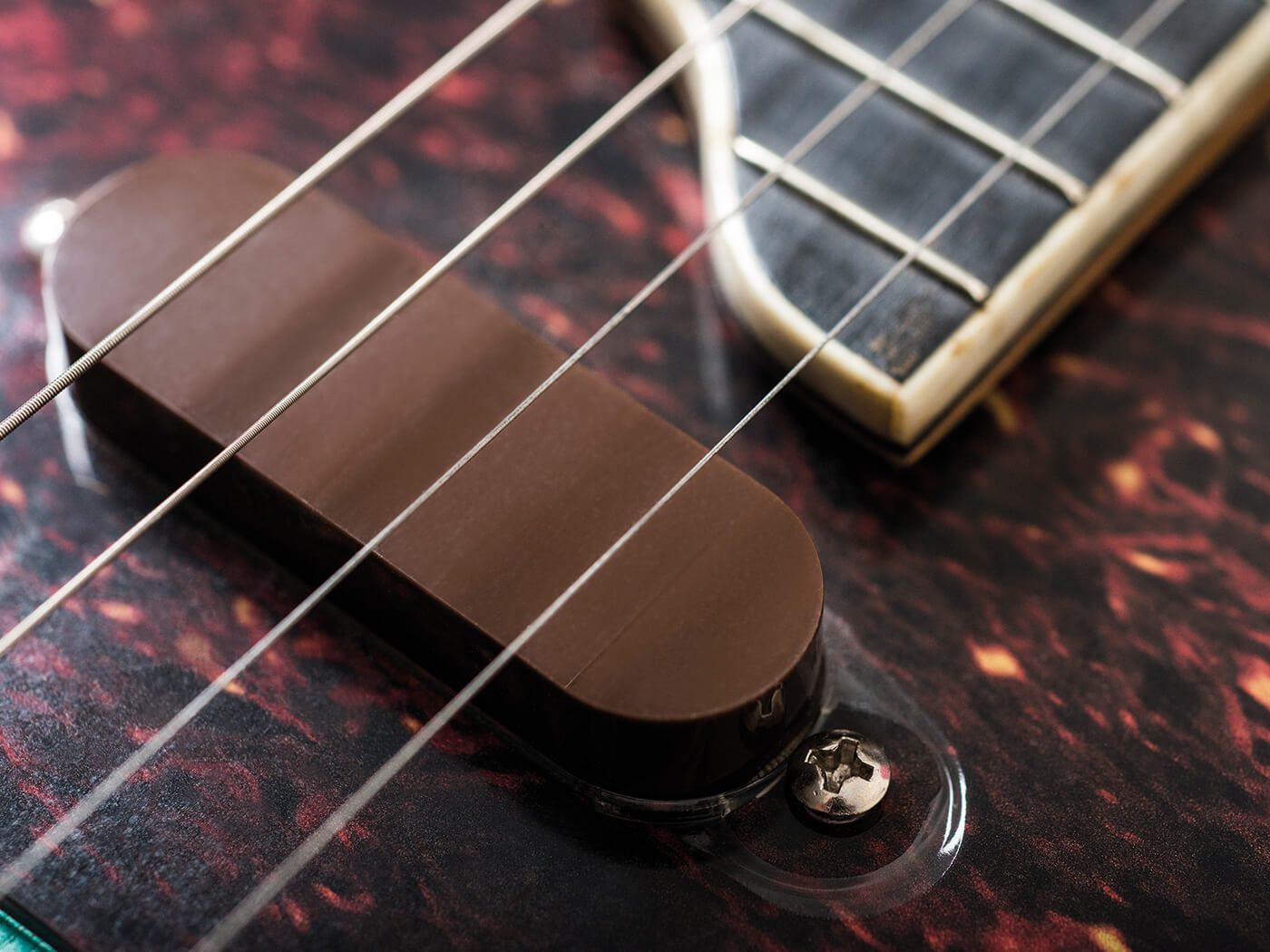 The banjo half sounds… like a banjo! Albeit an electric one – again, the addition of a piezo or similar pickup would make it more ‘authentic’, but for live use (and for avoiding feedback), it does the job admirably.

I had to swap the vintage banjo tuners for modern, geared ones, to maintain some semblance of stable tuning and the addition of an earth wire from the bridge of the Tele to the banjo tailpiece was necessary, but these were the only mods required after completion.

All in all, an educational, enjoyable, sometimes stressful, all the time unbelievable experience that I’m not sure I’d embark upon again, but will at no point regret! I’m incredibly proud of my design and the end result – and I will own and gig the beast until I am no longer able to.