Whether it’s rockabilly slapback, psychedelic feedback or crystalline delays, echo effects are fundamental to the sound of electric guitar. 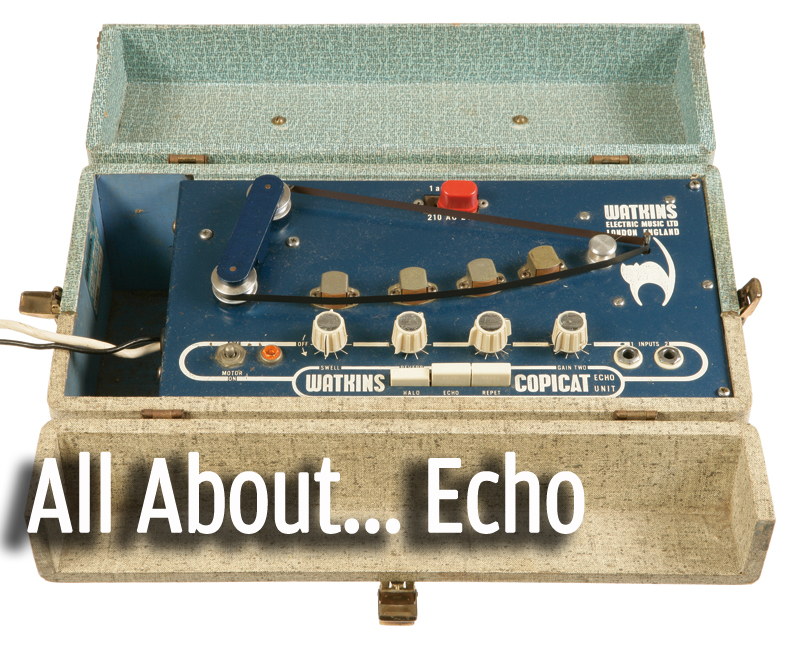 The term “echo” is often used interchangeably with “reverb”. Although related, they’re really quite different. An echo is a distinct repeat of the original sound – like a handclap bouncing off a canyon wall. Reverb is comprised of multiple echoes that are so close together they sound continuous.

Since echo occurs in the natural world, it’s hardly surprising it was among the first ‘effects’ engineers attempted to simulate electronically. There are several methods to achieve echo effects, but regardless of the technology, the parameters are usually the same and may include any combination of delay time, sustain/feedback, wet/dry, modulation and record level.

To create an echo, it’s necessary to record the sound then play it back after the event. Reel-to-reel tape machines were the first high-fidelity recording devices, so they were used to create the earliest echo effects.

Tape recorders usually have two or more heads. One head ‘prints’ the sound to tape and another head plays it back. These heads are physically separate, so if you monitor the recorded sound rather than the audio input, there will be a delay before playback occurs.

Tape speed and the gap between the heads determine the delay time. Most tape recorders run at 7.5 or 15 IPS (inches per second), so if the gap between the print and playback heads is one inch and a machine is running at 15 IPS, the resulting delay is one-fifteenth of a second – approximately 66 milliseconds. Switch to 7.5 IPS and you get 133 milliseconds – perfect for rockabilly slapback. 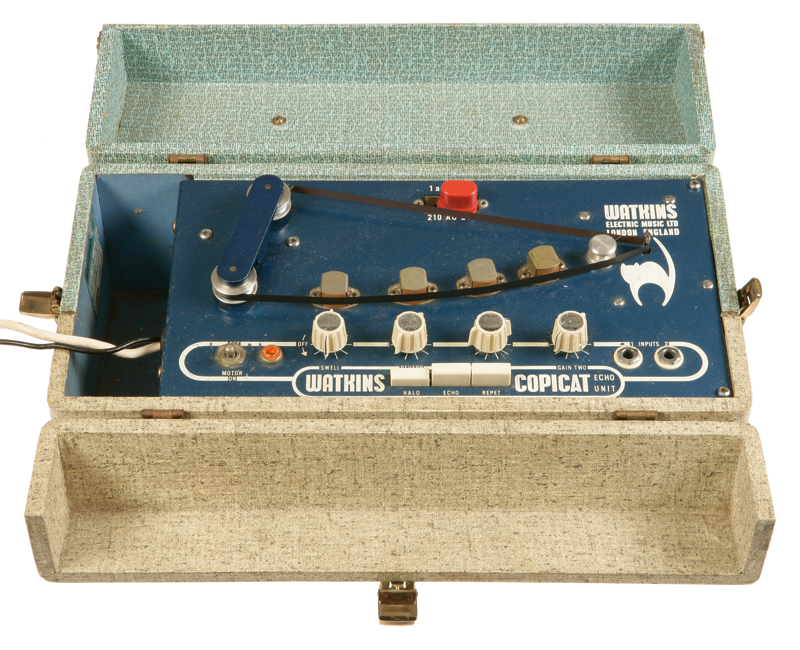 For additional repeats, some of the playback signal must be sent back to the tape machine input. Turning the return beyond a certain point will induce runaway feedback, which takes us from the 50s into the BBC Radiophonic Workshop of Delia Derbyshire, the psychedelic 60s of Pink Floyd and beyond.

When the space between the heads is fixed, the only way to adjust delay time is to vary the speed of the tape machine, and before long engineers were building varispeed control units. Les Paul was one of the trailblazers for tape-based studio echo and pitch effects.

There are limits to delay times achievable with a single tape machine because audio quality deteriorates as tape speed decreases. With the tape travelling between two tape machines, one can print the sound and the other play it back.

Print and playback heads placed 15 inches apart, with tape running at 15 IPS, produces a one-second delay time. Double the distance and you get a two-second delay. Studios often had long ‘echo shelves’ for this very purpose. The tape can also be looped, and exponents of this include Terry Riley, Brian Eno and Robert Fripp.

An Illinois music store owner called Ray Butts built a guitar amplifier with a built-in echo effect running on a short loop of tape. By 1953, he was selling EchoSonic amps to big-name players. You can hear the EchoSonic on Chet Atkins’ Mr. Sandman and Elvis’ Mystery Train. 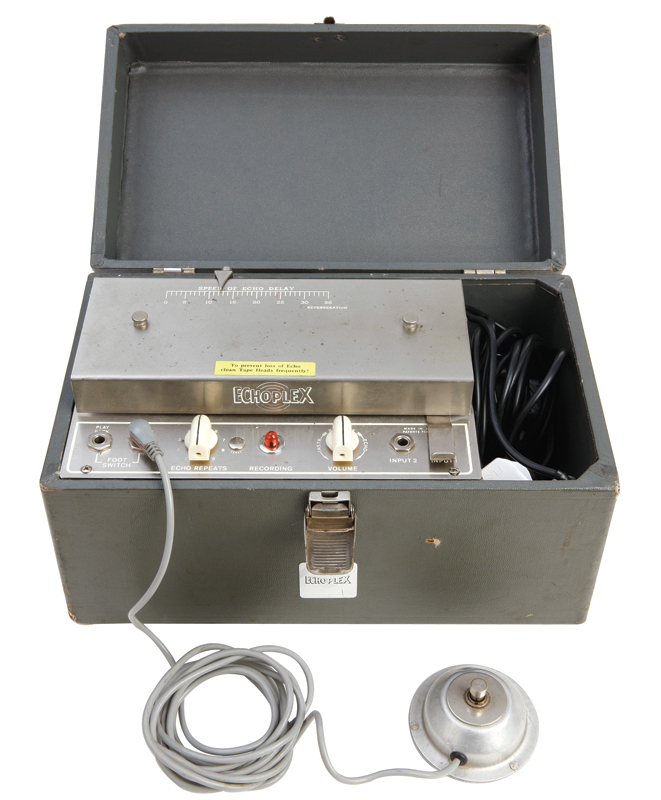 Early machines were valve, but many prefer the sound of later solid-state tape echo machines – especially those with variable tape speed. Other notables include the Klemt Echolette, the Dynacord Echochord and Roland’s RE series.

Other vintage devices used rotating magnetic drums rather than tape. David Gilmour made extensive use of the Binson Echorec and Hank Marvin used a Meazzi Echomatic.

Tape echos need regular maintenance, and eventually they wear out. Today, we can appreciate their quirky characteristics because other options are readily available, but by the mid-70s, most guitarists were ready for something different.

Bucket brigade devices (BBDs) are integrated circuits containing numerous transistor/capacitor cells. Transferring packets of charge from one cell to another takes time, which delays the signal, and the BBD output is mixed with the dry signal to create an echo effect.

BBD-based delay units were small, and needed no maintenance. However, they were noisy, lacked fidelity and delay times were very limited. Some classic BBD delays include Boss’ DM series, the Electro-Harmonix Memory Man and the Ibanez AD9, and many remain popular with players.

BBDs also provided the basis for countless flanger, chorus and phaser pedals, but for echo they were essentially a stop gap until full-on digital delays became more affordable.

It helps to think of digital media in terms of storage rather than recording. An audio signal is converted into digital information, where it can be stored in a buffer until required and converted into the analogue domain for playback.

At first, digital delays were expensive rackmount effects seen only in high-end recording studios. Like analogue synthesisers, they had switches and control knobs for every parameter – and no presets. The most exciting aspects of these units were unprecedented user control, clear sound quality and long delay times. 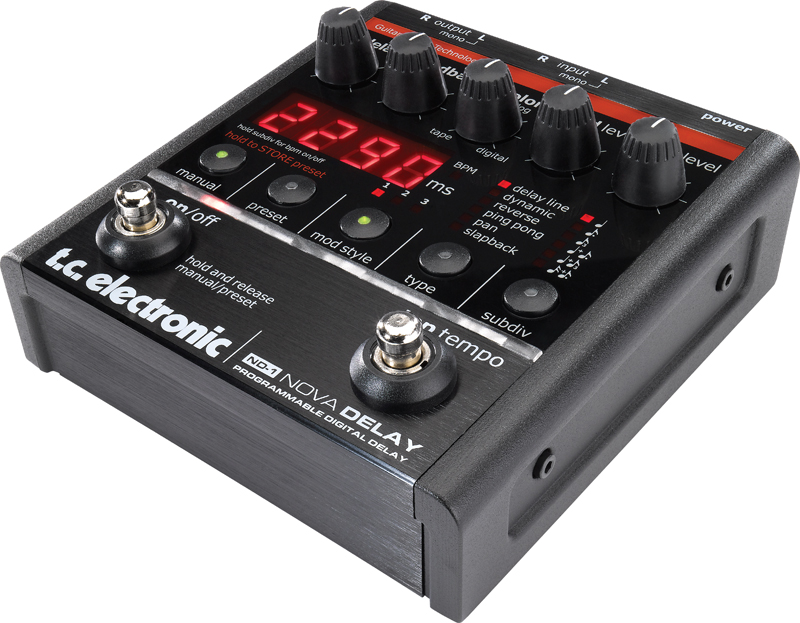 LED panels showed the delay time in milliseconds. Most engineers carried delay charts in their personal organisers to match delays to the tempo of any song that had been recorded to a click track. From simple quarter beats to dotted triplets or 3/16s, setting delay effects had become easy and exact. Previously, engineers had to rely on their ears to set delay times.

By the mid-80s, digital delay pedals were starting to appear on the market – most notably the Boss DD-2. Having such accurate control over timing enabled guitarists to build up rhythmic patterns of great complexity and sonic interest from the simplest of ideas. Edge from U2 is perhaps the most well-known exponent of this playing style.

Consider how echo effects have evolved. The initial drivers were extended delay times and improved audio quality, then for a while players were more concerned with convenience and reliability. Digital technology eventually provided users with outstanding audio quality, reliability and controllability, but we have come full circle.

Today, we guitarists have the luxury of choosing the best type of echo for any given application. Our own individual definition of ‘best’ is more subjective than ever and lo-fi audio, distortion and erratic pitch often win out. The use of cutting-edge modelling technology to replicate the sounds and peculiarities of yesteryear is one of the great ironies of our era.

Yet it’s also the most fun, and we can thank Line 6 for blowing guitar echo effects wide open with the DL4. Now everybody’s at it, with other digital players including Strymon, Catalinbread and Cicognani.

Check out our picks of the best echo units available today.