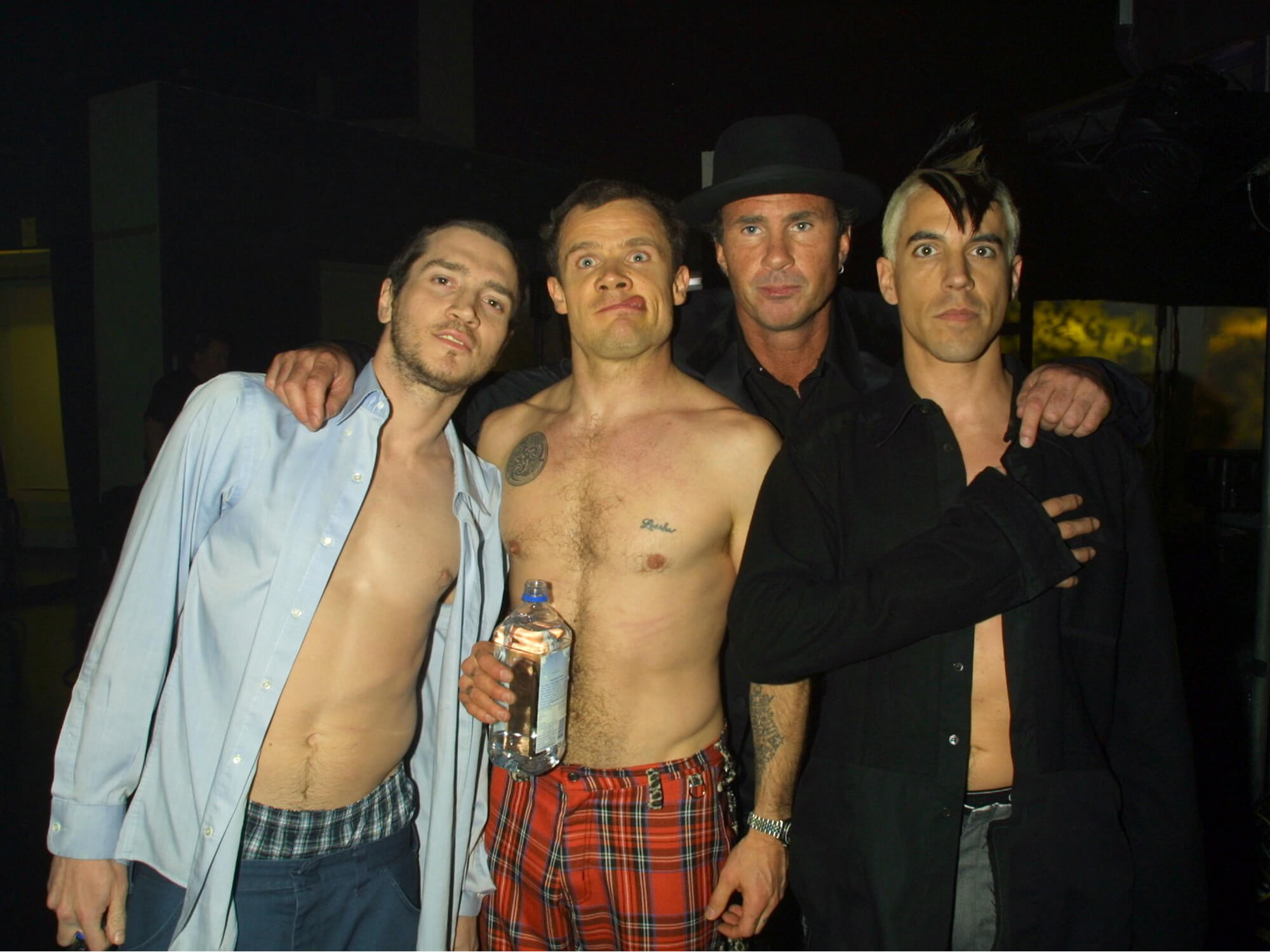 Some of the finest moments of the Red Hot Chilli Peppers, from John Frusciante’s trademark Strat, to Josh Klinghoffer’s distinct aggression.

If you’re reading this, the chances are that it won’t be the Beach Boys, Katy Perry, the Mamas & the Papas, or even the Eagles that come to mind when you think of music and California. It’ll be four men bouncing around a stage wearing nothing but socks – and not on their feet.

Thankfully, the Red Hot Chili Peppers’ wardrobes have developed over the years. The energy and bite that helped the band sell more than 100 million records, though, is still present and correct. Since forming in 1983, the Los Angeles troupe has played host to many guitarists with myriad influences: Hendrix, hip-hop, The Beatles, funk, punk, even country.

John Frusciante’s trademark strat with its warm, often subtly driven tone has at times dominated the rock scene over the past 30 years, but Dave Navarro produced some of the band’s most underrated guitar parts on strats and his PRS Custom 24, and Josh Kinghoffer often brought a distinct aggression with the faintest of touches.

The result has been everything from complex and layered masterpieces to crude, messy tracks that find a way to work nonetheless.

Here, we examine some of the finest. This is Red Hot Chili Peppers’ top 10 guitar moments.

There are so many tones packed into this track from RHCP’s latest album. The intro is wonderfully warm and dark, with a hint of vibrato. The bridge that follows is brighter, before you’re hit in the face with fuzz during the wild, bendy post-chorus solo. There’s the perfect amount going on in a track that feels like a Chili Peppers history lesson, with a chorus that could have been lifted from Californiacation and timeless lyrics from Anthony Keidis. Frusciante steals the show whenever he can, as his solos wail and pop with emotive licks.

Texture is everything here. Dave Navarro opens the song with what is in essence a basic droning riff on the low E and A, but he builds in a tension with a Boss delay and super chorus that gives the intro an enormity that perfectly sets up the carnage that follows later in the song. Navarro perhaps lurks in the shadow of other RHCP guitarists, but songs like Warped show he bought into the knack for building an unsettling atmosphere that the band did so well. The track bursts into life at the minute mark, as Navarro keeps the same accent to his playing but dials in bite and attack that sits in psychedelic opposition to Anthony Kiedis’ Tommorow Never Knows-esque vocals. It’s a masterclass in subtle palm muting, as Navarro keeps the articulation in a bitey tone that could easily lose its attack.

Flea is the real star here. The bassist’s Fender Jazz grumbles and snarls in the background, but it pops all the more because it dovetails with Frusciante’s gently driven tone. The throaty wah riff that persists through the song gives it a unified forward motion. Its as if the bass and the strat are one big ten-string. The song was inspired by a jam session the band had after Frusciante had been listening to Public Enemy.

If you were to take a Voodoo Child and feed it some Red Hot Chili Peppers, you would end up with something like Shallow Be Thy Game. Flea’s bassline bubbles underway in the background, giving Navarro room for a quacky and brightly wah-ed rhythm section, hanging off that Hendrix-y E9 chord with stabs and muting propelling the song forward. The solo at the end is a whammy-heavy dive into chaos. It competes with some phenomenal drumming from Chad Smith but keeps the section tight and brings a level of sense to the band exploding around it, all without doing anything overly complicated.

Of all the odes to California that RHCP produced, this must be the darkest, which is perhaps why it resonated with people so much. It touches on everything from conspiracy theories to addiction to the commercial side of fame. In a way the intro is a classic case of Frusciante playing embellishments over wandering chords, as he picks his way through a creeping Am and Fmaj7/C progression while Flea gives direction from the octave below. The slow tempo and picking gives it a desolate quality, though. It’s a twisted response to the Surfin’ USA California sung about in the 1960s. Californication almost didn’t appear on the album that ended up bearing its name. The band was struggling with the arrangement until the opening riff emerged and an anthem was born.

It is not a mind-bending and fear-inducing discoteque death march in the way some other songs on this list are. In truth, the song as a whole is little more than passable, a vaguely interesting interlude between more interesting songs and in fact more interesting albums. It is leant a certain majesty, though, by Josh Kinghoffer. Kiedis and Smith dominate proceedings during the verses, but Kinghoffer takes his strat to its bright, thin limits and wahs expressively to add spice to an otherwise only-lightly-peppered song. He hardly plays any notes, just the occasional stab, run and cut that punches its way into the mix. It’s an unusually uncluttered song for the band, and Kinghoffer makes excellent use of the space with a reverb and delay combo that allows his attacks to breathe.

Plain and simple: it’s a bop. On an album that can be a bit broody at times, this track snarls from a different angle, bringing energy and bite. The intro is one of the tightest that Frusciante, Flea and Smith have ever crafted as drums match up with crunchy rhythm tones from a rare tele for this list, and the guitar outro is layered with competing parts that seem to interrupt and respond to each other. It’s a bit of a mess, but it all comes together for an utter headbanger.

No guitarist in the past 30 years has embraced Hendrix’s legacy as successfully as Frusciante. In Snow, he takes a hammer-on rhythm idea from Hendrix and reduces to its very bones, arpeggiating simple triads and racing along with incredible speed. Everything in the song hangs around that one legendary riff. Despite the repetitive and potentially exhausting nature of Snow, Frusciante doesn’t use a loop pedal when the band play live. He rollicks along at close to eight notes a second for the full five-and-a-half minutes.

To really understand this song you have to see it played live. Frusciante wields a suitably beaten up sunburst strat for the band’s Live Earth performance, and induces a roar from the crowd when he launches into that mutey, funky intro. It stays simple, a straightforward pentatonic riff, but the attack and muted strumming on a neck pick-up just nudging break-up creates a truly spectacular moment. The song also saw Frusciante produce some excellent live solos, keeping the funk going with expressive wah use and wild vibrato on licks that follow the melody.

Under the Bridge has one of the most iconic guitar intros in history, and certainly the most iconic since 1990. The picking over a D and B chord progression gives it an eerie quality, and the embellishments on the main progression sing with trademark John Frusciante zest. RHCP lead singer Anthony Kiedis wrote the lyrics for Under the Bridge after feeling estranged from Flea and Frusciante. Upon hearing the lyrics, Frusciante came up with several possible chord progressions, and eventually settled on the funky verse parodied everywhere from the Big Bang Theory to the Axis of Awesome.