Get to grips with the D minor chord in plenty of positions with some exciting extensions.

One of the easier open string chords, D minor sits comfortably under the fingers. For the basic open string shape we prefer finger four to finger three on the B string, because it is more compact and leaves finger three available for quick changes to G major. Try it both ways and see what you think.

D minor is a reasonably common key for songwriting – as an example, check out The Kinks’ Sunny Afternoon with its long descending bassline intro. Usefully, D minor is also chord II in C major and chord VI in F major.

A four-note chord, the high position of D minor means that it’s fairly lightweight, but this can be fixed by using drop D tuning, where the low E string is tuned down a tone to D. In drop D the open sixth string could be added as a bass note to most of the following shapes.

The notes of D minor are D, F and A, which are the root, minor third and perfect fifth. These are steps one, three and five of a D minor scale. Depending on the shape, you could try experimenting with adding the open E or B string to these chords, giving you either D minor add nine or D minor sixth.

This is the last Chord Clinic column in its current form, but we hope you’ve enjoyed getting to grips with the myriad interesting shapes and inversions this column has brought to you over the years – happy chording! 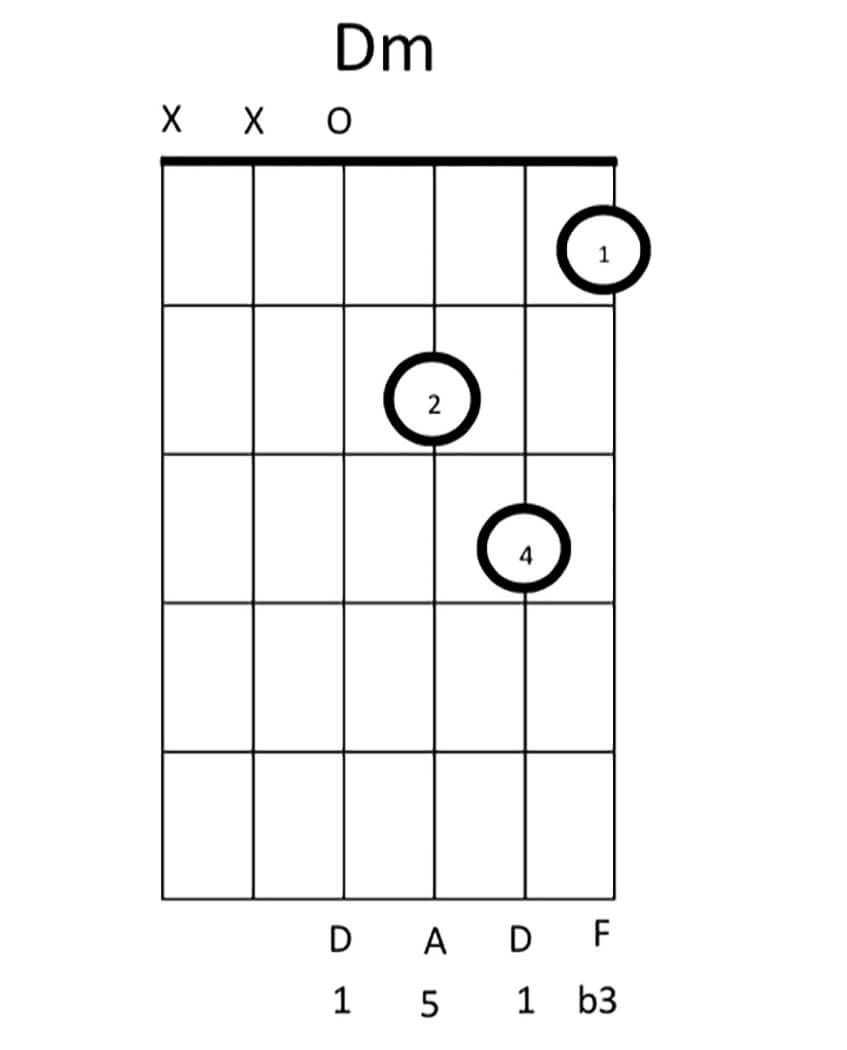 Mute the low E string by allowing your thumb to come over the top edge of the neck. If you are strumming, try to concentrate on the top four strings. You can get away with the open A occasionally, but the E just doesn’t go unless you’re in drop D. 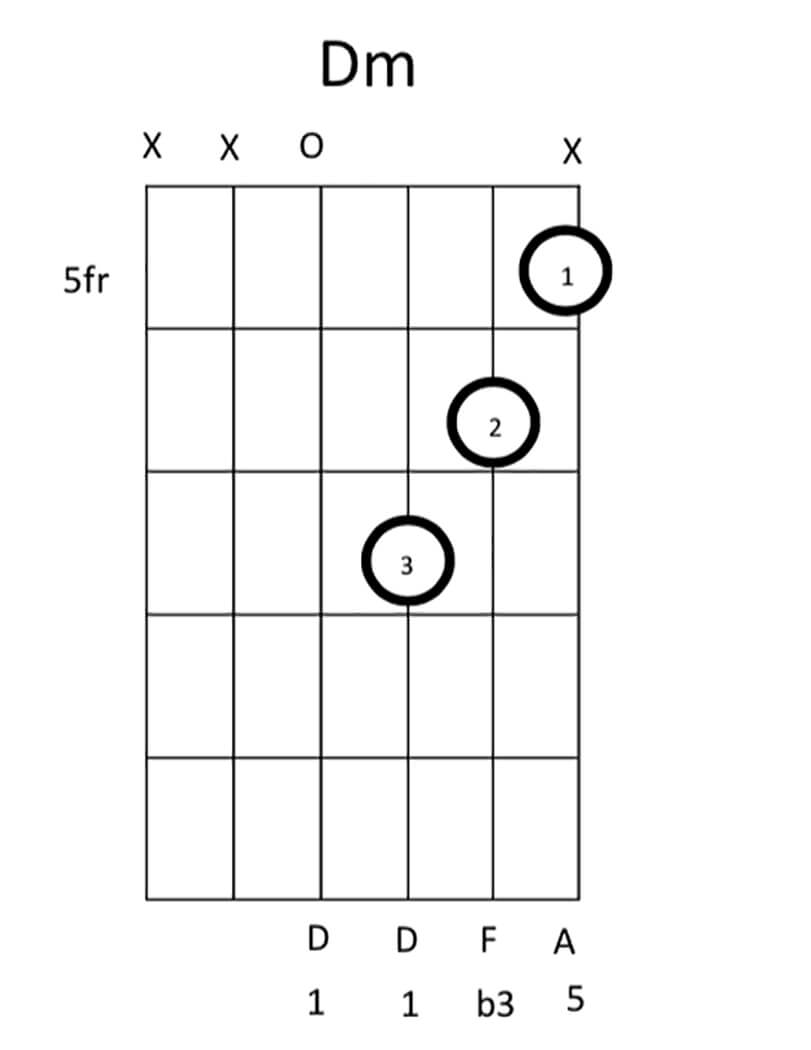 Taking each note of figure 1 up the neck to the next note of the chord gives you a sparkling and chiming voicing at the fifth fret. If you leave out the open bass note the top three strings give you a root position chord and sound sweet as delicate arpeggios. 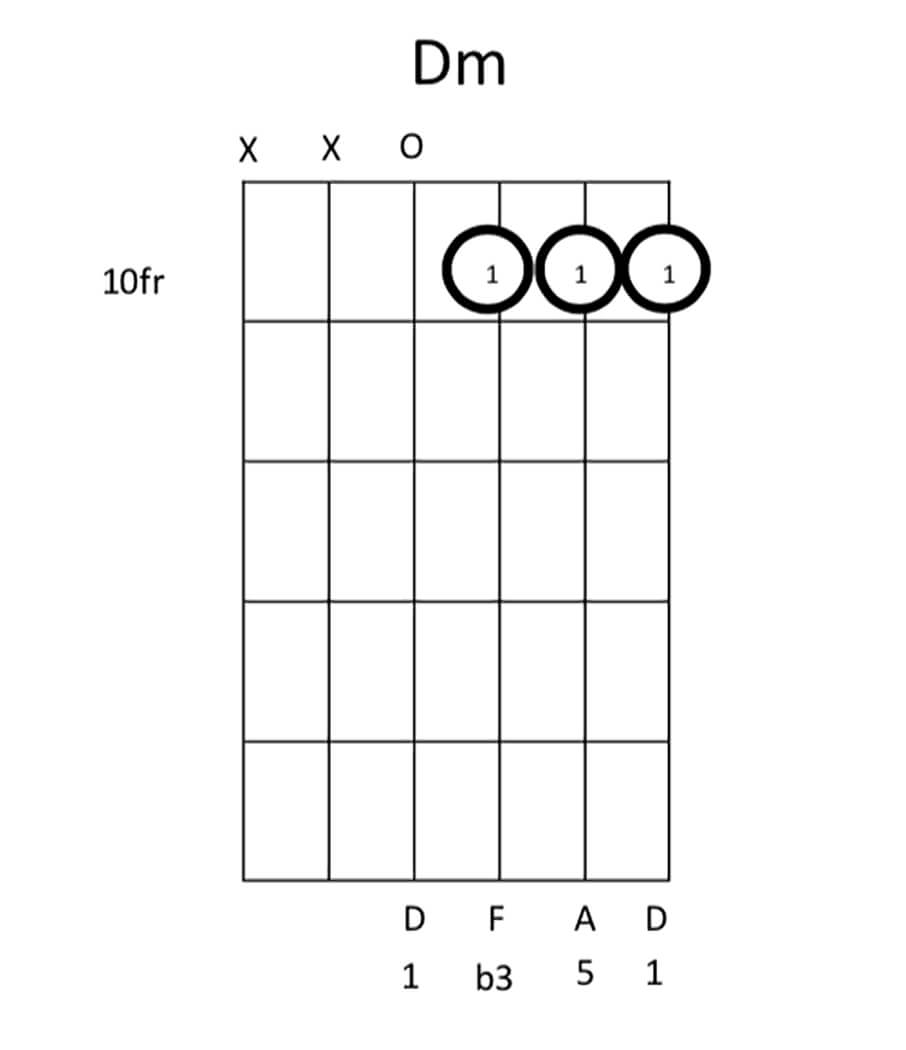 Moving up the neck again, a half bar across the 10th fret adds even more sparkle and chime. In this position the top three strings give you a first inversion chord, with the third in the bass. Try finger picking arpeggios while moving between figures one, two and three. 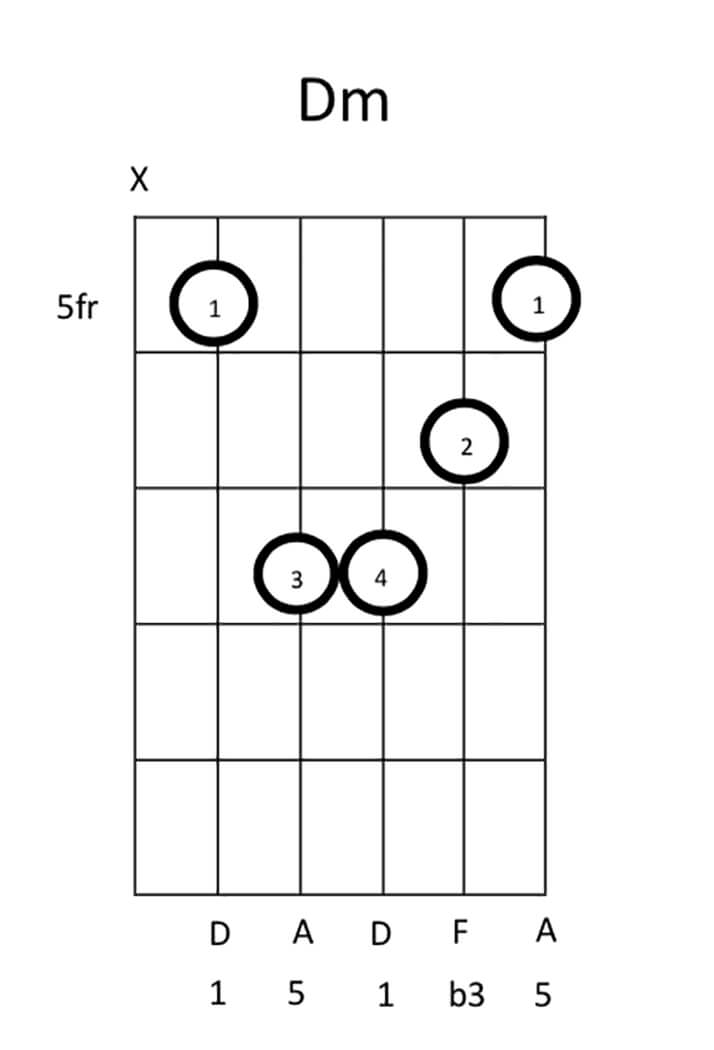 D minor works well as a barre chord at the fifth fret, and you should try hammering-on fingers two, three and four while holding down the barre. Then experiment with occasionally releasing the pressure on the strings for some funky percussive strumming. 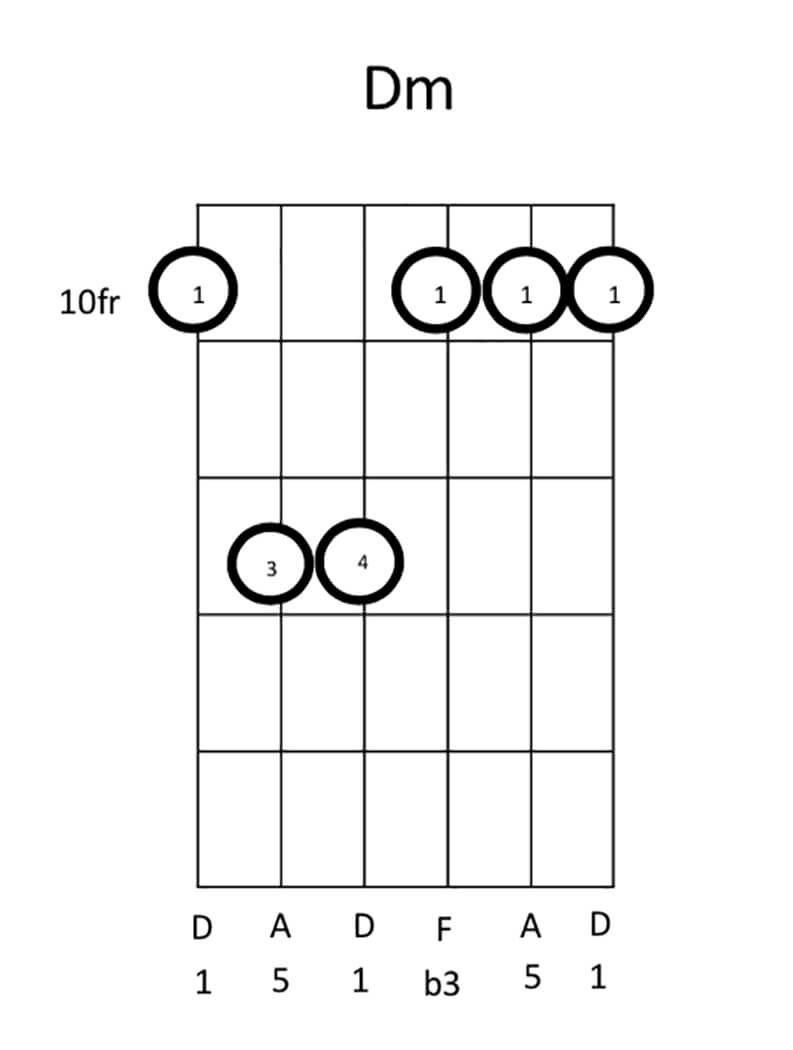 Here we have the other movable bar chord version of D minor, based on the open E minor shape. Doing a barre this high up the neck can be tricky on some guitars as the body gets in the way, but you should be fine on most electrics and 14 fret acoustics. 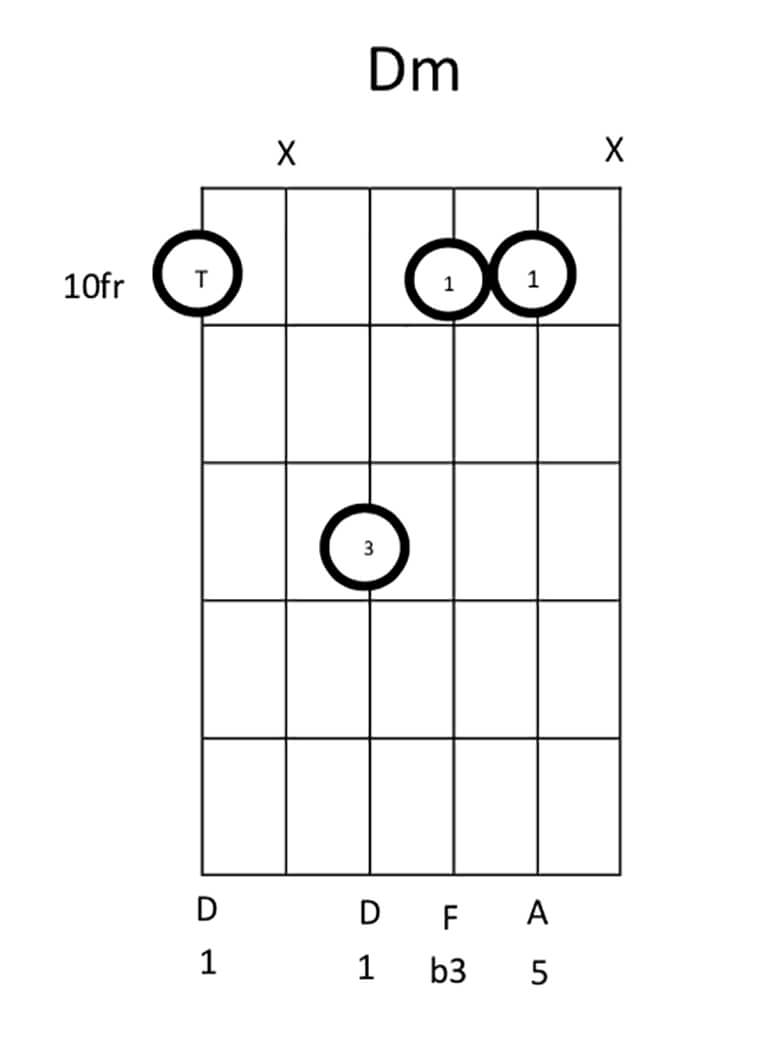 This shape removes the surplus notes from figure 5 and uses the thumb over the fingerboard to hold down the E string. If that is awkward for you, use fingers one, two and three at the 10th fret and finger four at the 12th fret. Mute the unwanted strings with the undersides of the fingers. 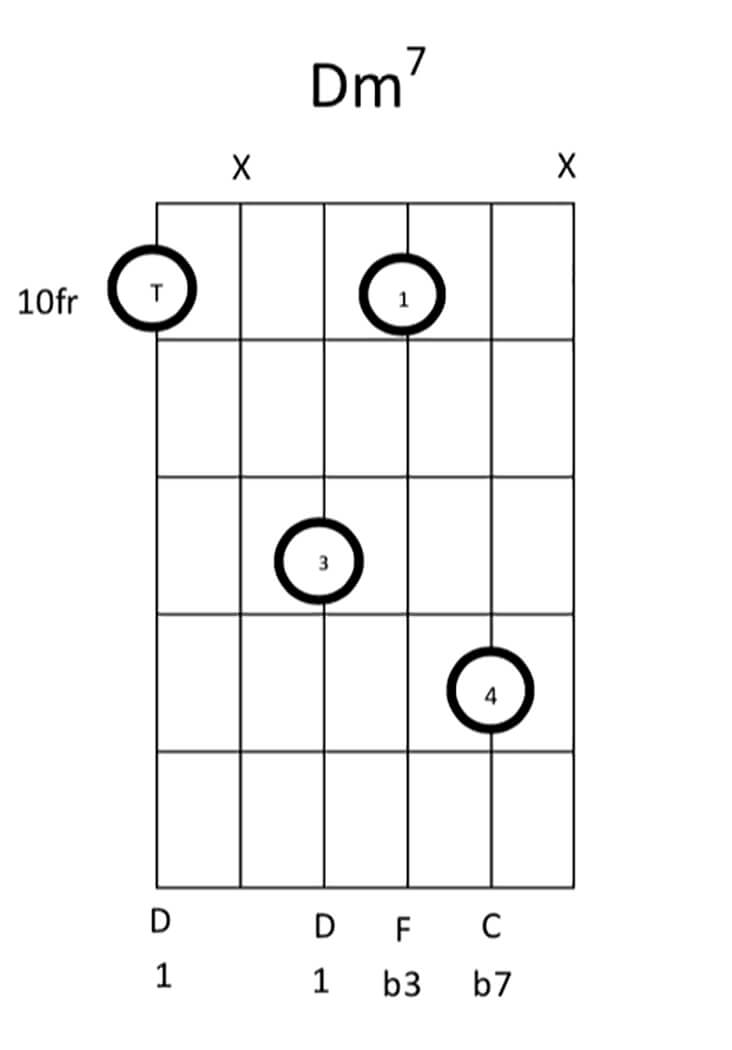 Staying with “thumb-over” chords for a moment, we’ve added the note C on the B string. C is the minor seventh, and when added to D minor it creates a chord of D minor seven. The minor seventh is the note most frequently added to a minor chord. 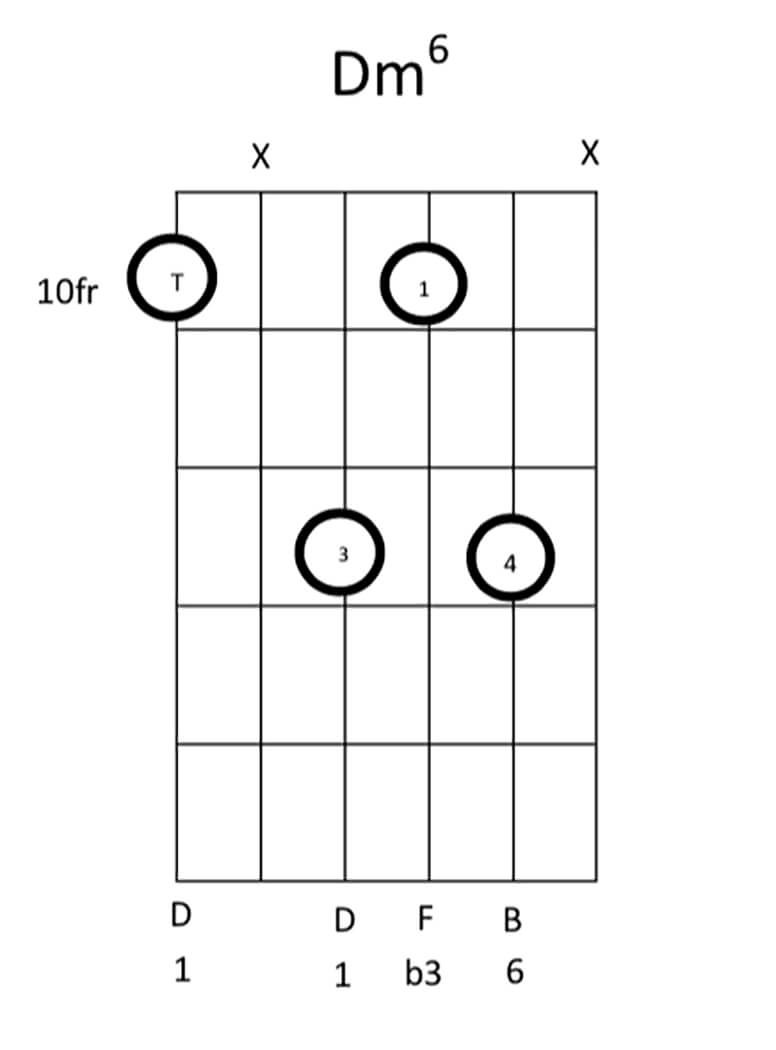 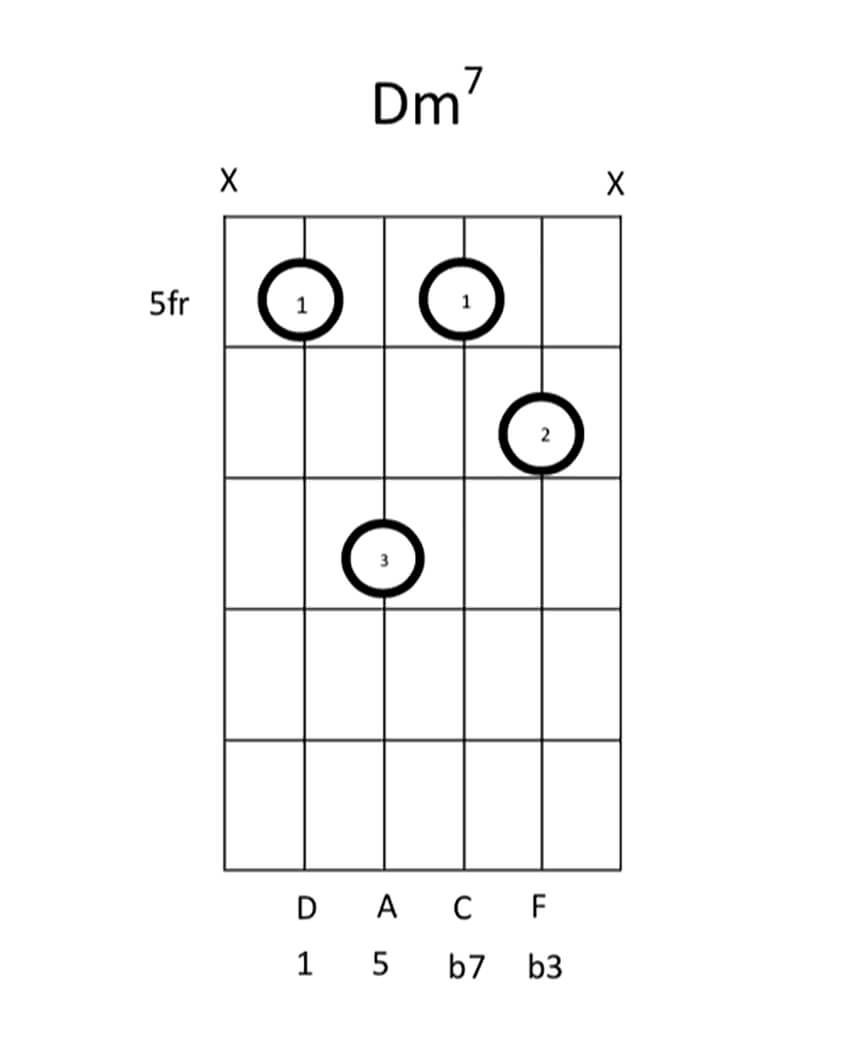 Here we have a thicker voicing of the minor seventh, with the added C an octave lower. Hold the barre while hammering-on with fingers two and three. Then try releasing the fret hand pressure to mute the strings with the index finger and get your percussive strumming up to scratch. 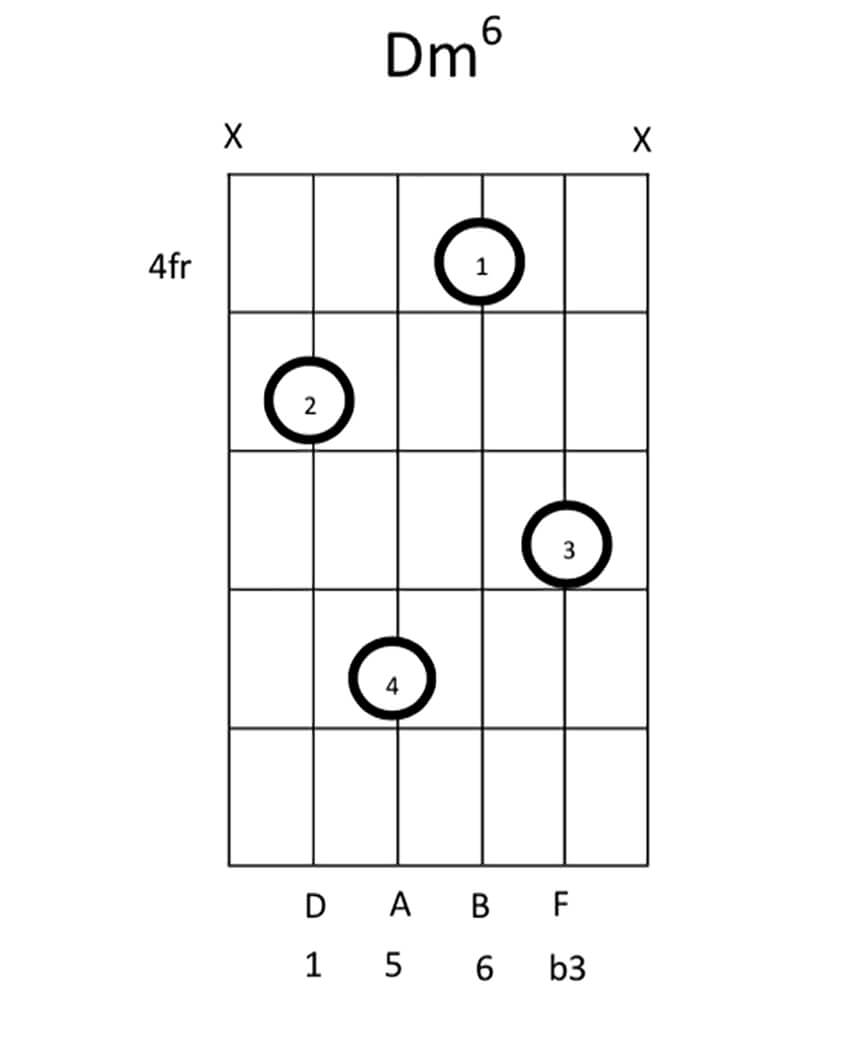 This might not be the most comfortable chord to wrap your fingers around, but here we have the minor sixth in the lower voicing. Letting the top E open string sound as well will give you D minor six/nine, which sounds mysterious and evocative with all kinds of fingerpicked arpeggios.