It’s one of the most basic chords any of us will learn, but an inversion here or there can spice up your A minors in no time. 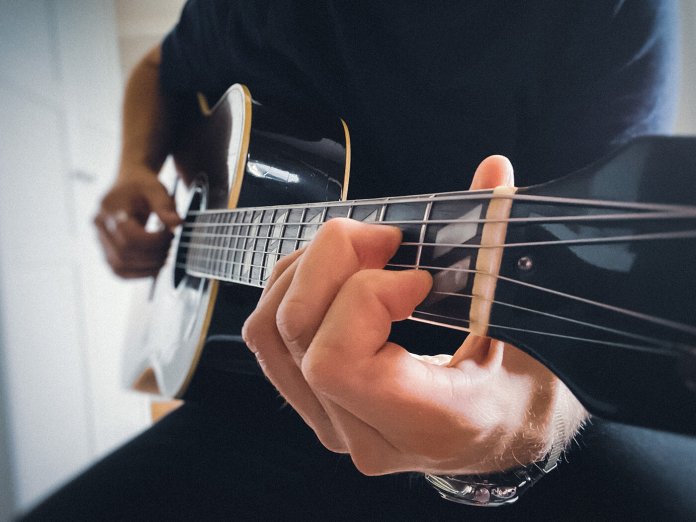 The basic A minor is one of the easiest chords to play on the guitar – with closely spaced fingers and no big stretches it falls snugly under the hand. Guitarists with big fingers sometimes find it tricky to avoid muting the open E string, so keep the index finger pointing straight at the neck.

Interesting and colourful variations on A minor also fall under the fingers comfortably, and it’s a great key for songwriters as chords IV and V, Dm, E, or Em, are available as open string chords. The modal seventh, G, also sounds great in sequences with A minor. It can be useful in major keys – it’s chord II in G, chord III in F and chord VI in C.

The notes of A minor are A, C and E. These are the root, minor third and perfect fifth, steps one, three and five of an A minor scale. Enjoy playing and experimenting with these chords – we’ll see you next month. 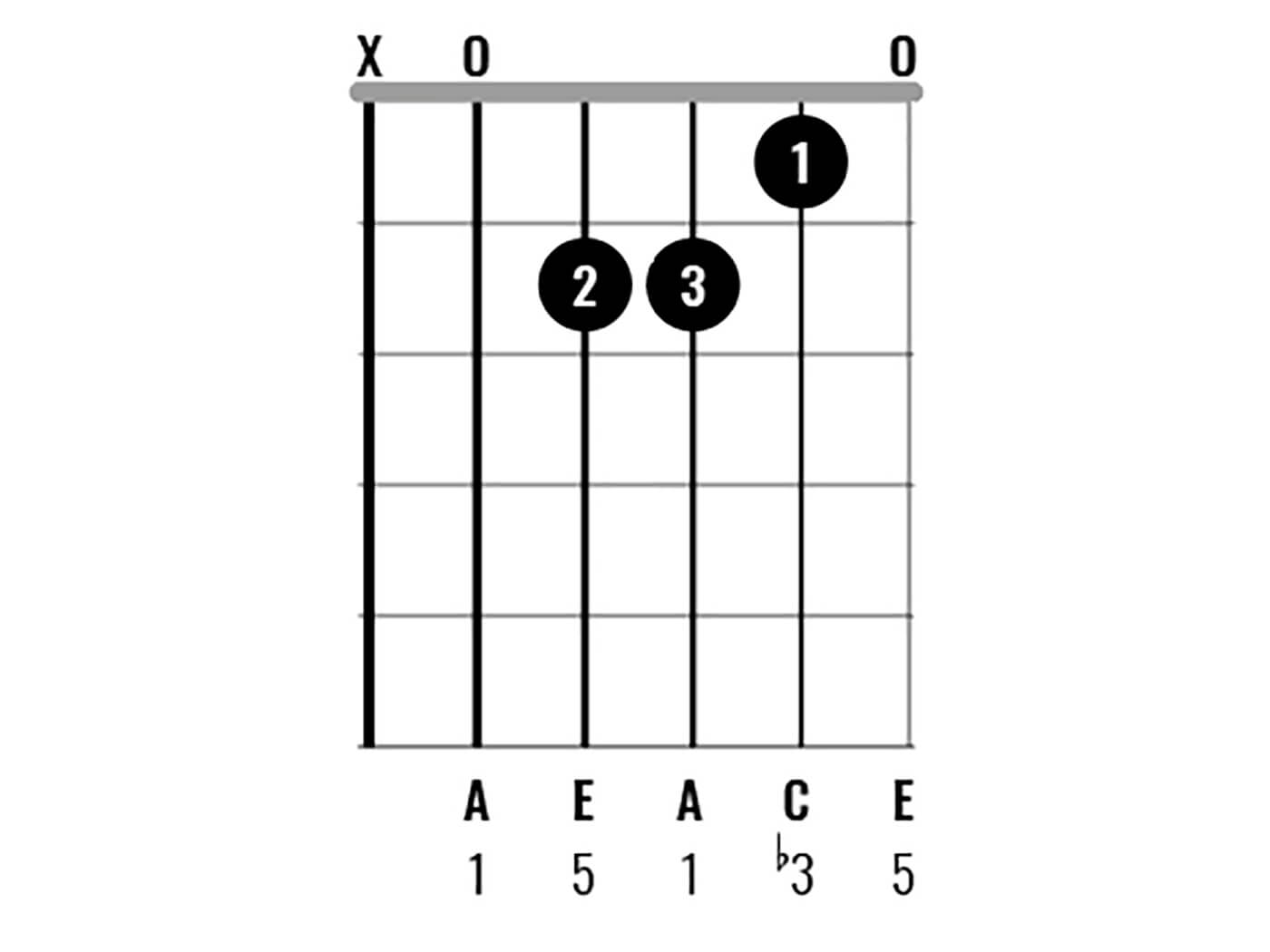 Try strumming the top five strings of the guitar open, and then hammer on the three fingers that make the chord, keeping the rhythm going. You can also hold the chord down and just hammer on the first finger; artists from Neil Young to Noah Cyrus can be heard using this trick. Aim to avoid playing the open sixth string – you could allow your thumb over the edge of the neck to mute it. 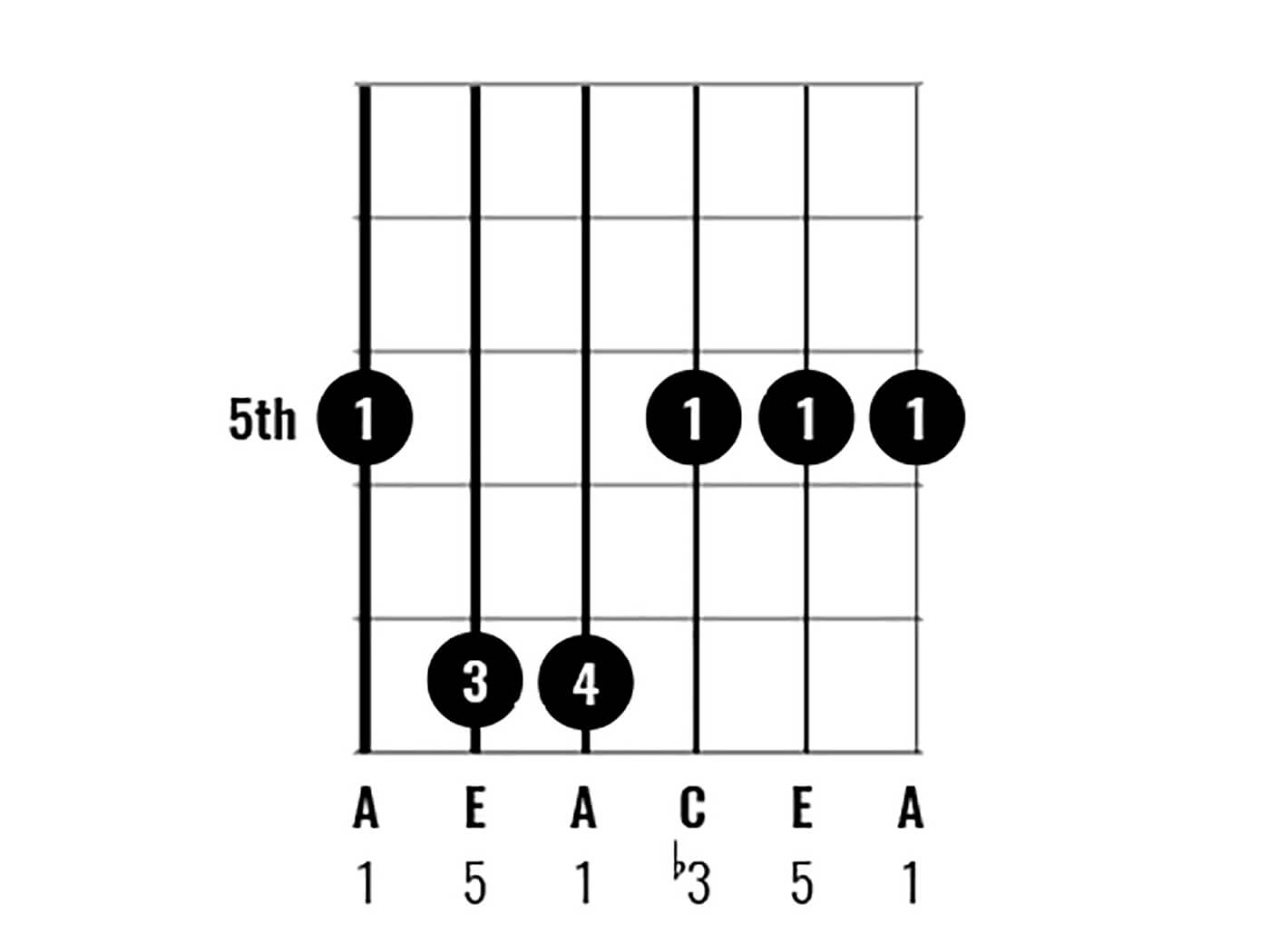 The trusty movable barre chord gives us A minor at the fifth fret, and beginners often find this one to be quite a handful. It can be hard to apply enough pressure to the G string to get the note the sound cleanly, particularly on a steel-string acoustic. We think the secret is to apply even pressure across the index finger, and not to pull from the elbow, but in the end, it’s going to take practice. 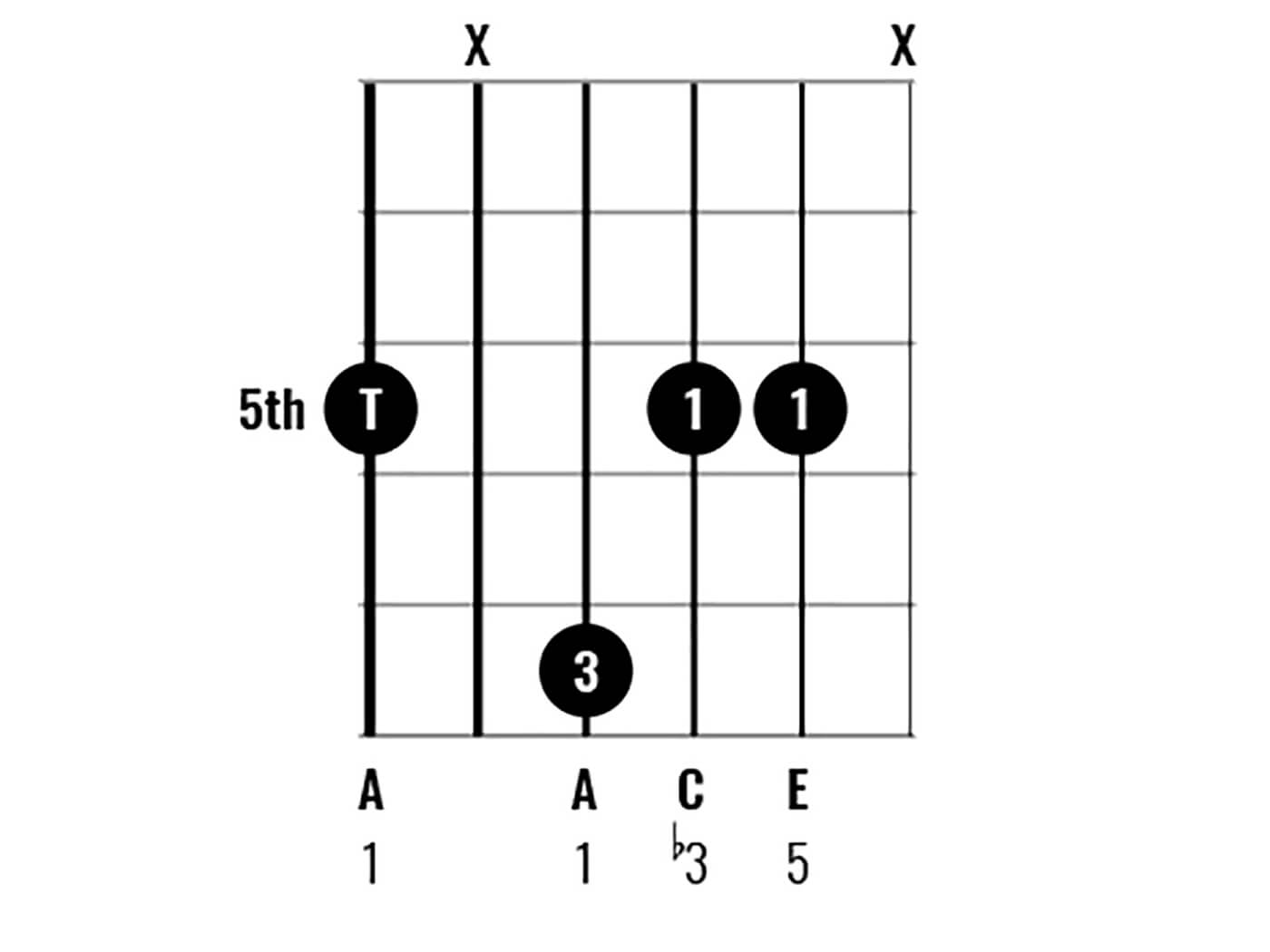 Four-note voicings often sound better than full barres, although the thumb-over technique we’re suggesting here can be tricky for small hands. Wedge the first finger in to hold down the G and B strings but mute the top string. You can also do this with fingers one and two, and then stretch finger four out to hold down the D string. 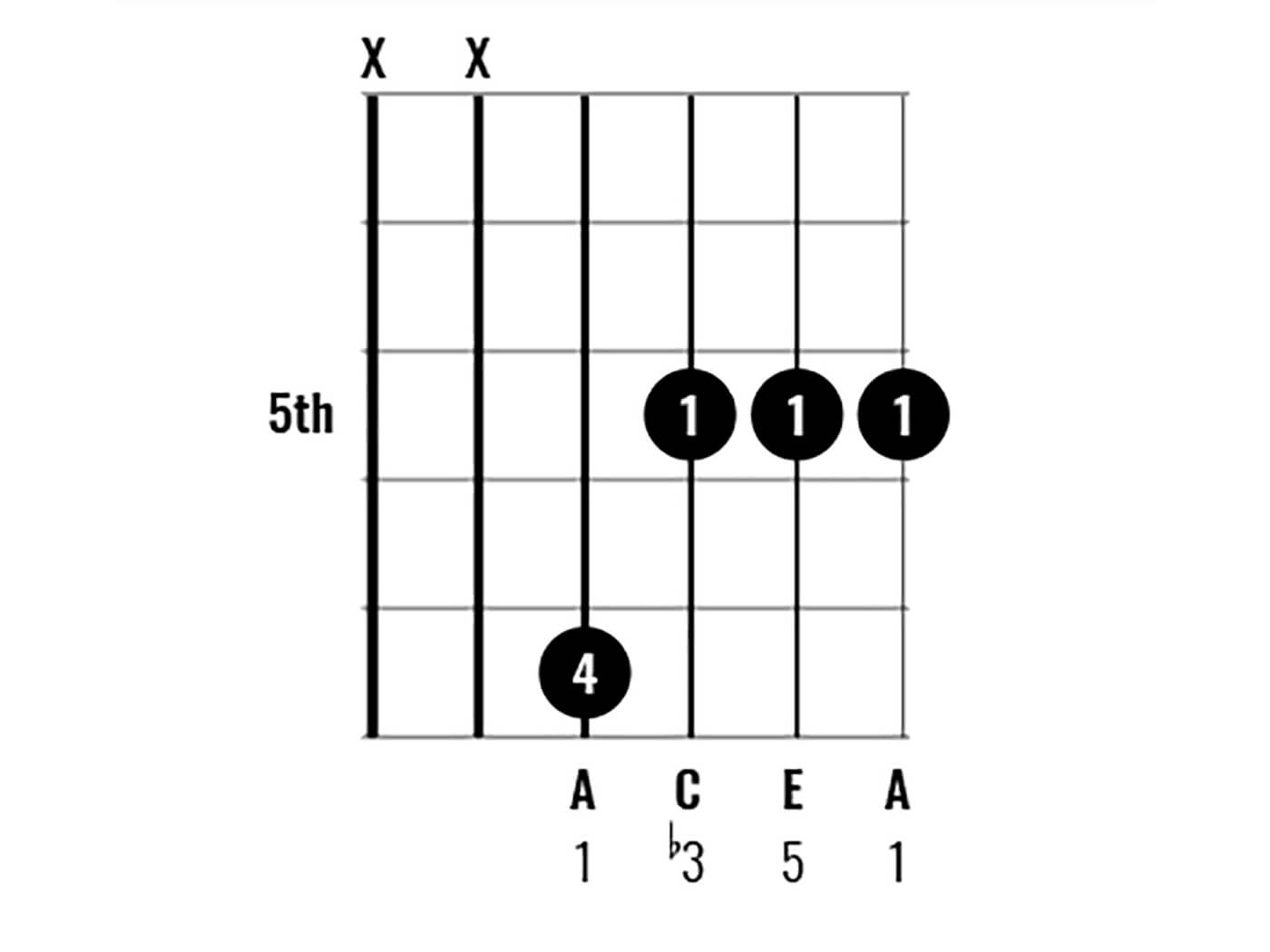 Here is another four-note voicing, this time focusing on the top four strings. High voicings like this are useful for choppy rhythm parts and chord/melody arrangements. When the root note of a chord is in the bass (as it is here) we say it is in “root position”. Chords sound strongest when in root position. 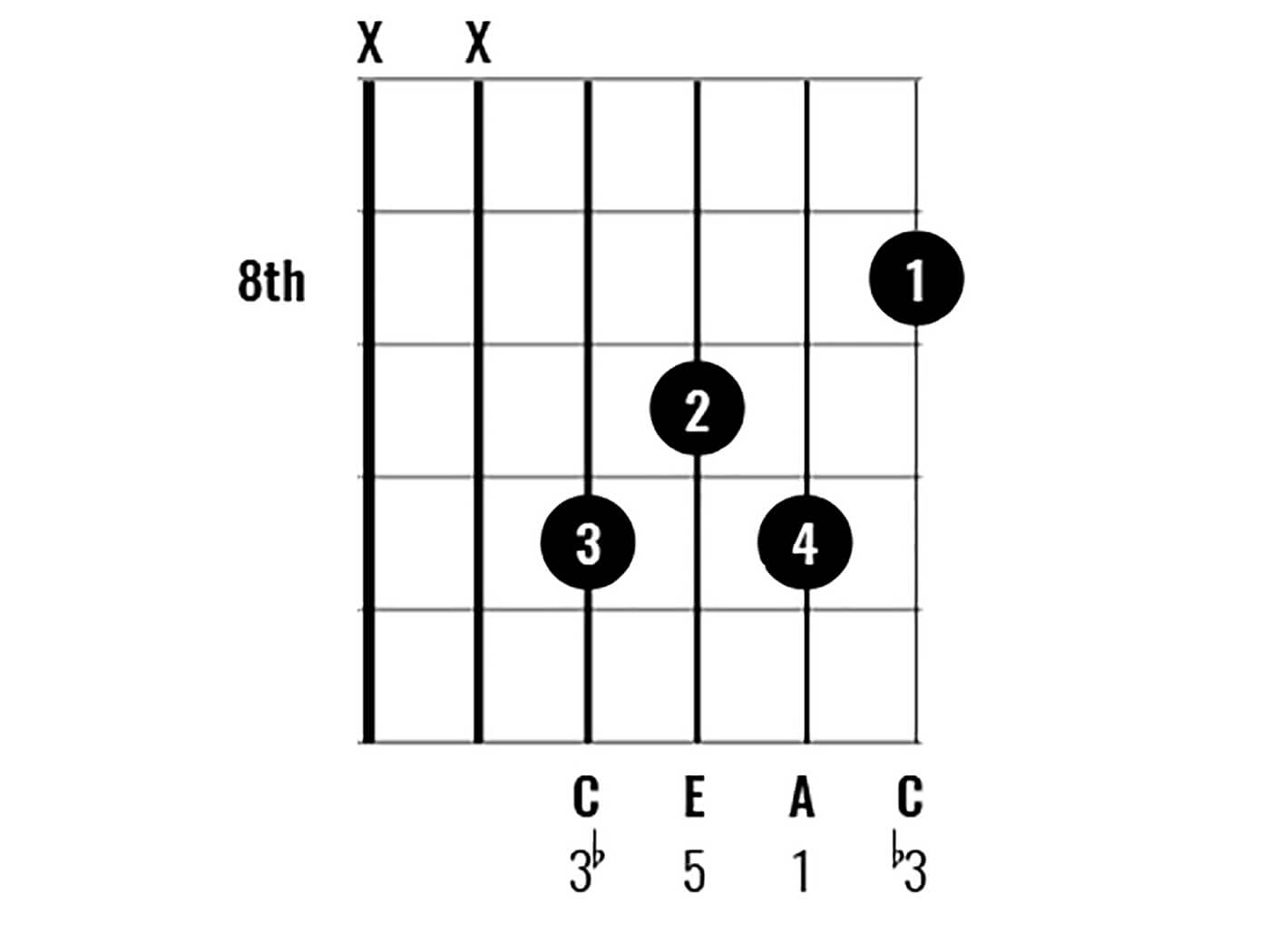 This is another high four-note voicing, but this time the chord is in first inversion because the note C, the minor third, is in the bass. When you are staying on one chord for a long time, you can make it more interesting by switching between different inversions. 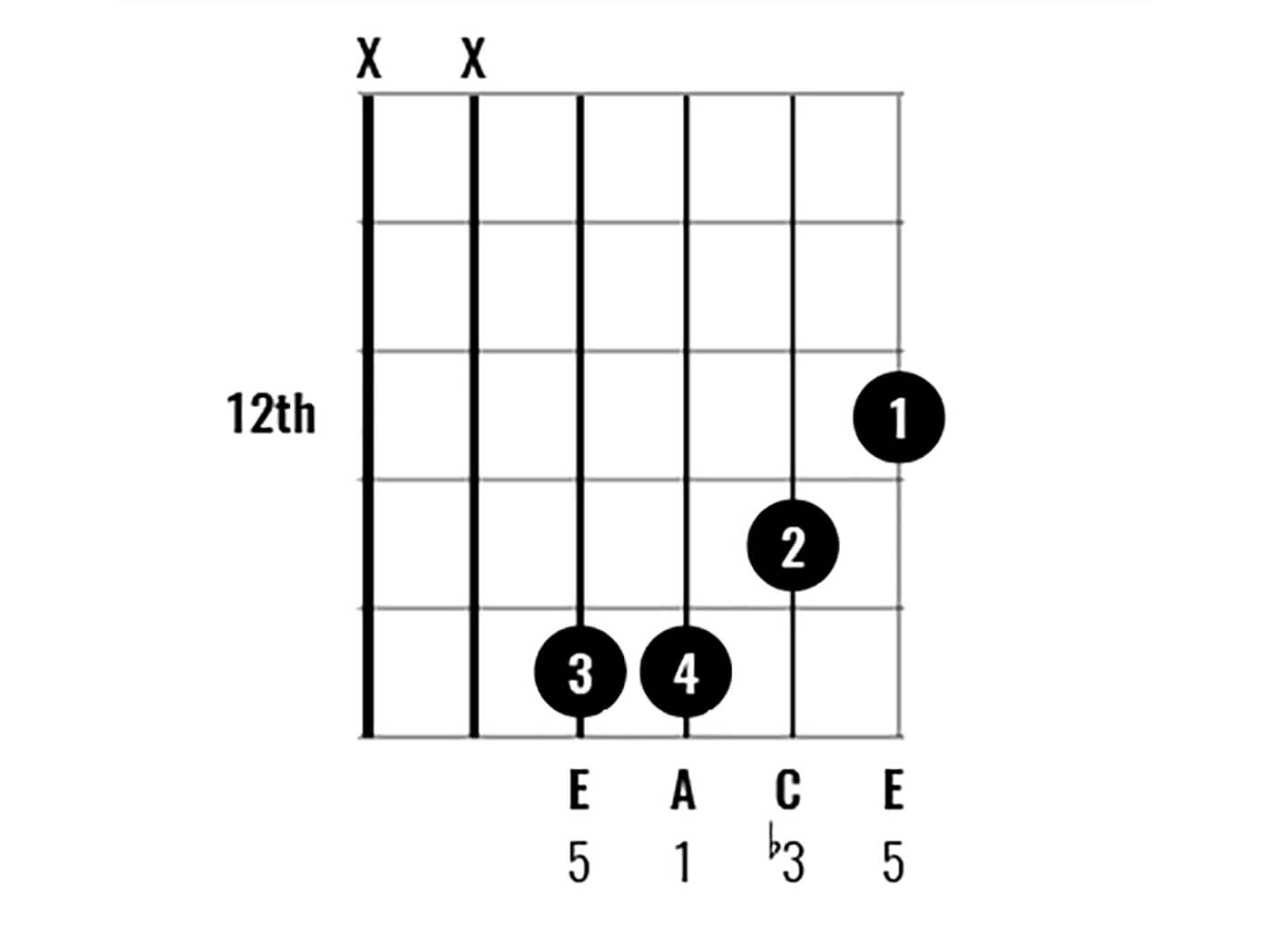 Completing the full set of inversions, we now have the second inversion, with the fifth, E in the bass. This would be the same as if you played the top four strings of the open chord, figure 1, except that now we are an octave higher. You could also play the last three examples and sound the open A string, although technically they would then all be in root position. 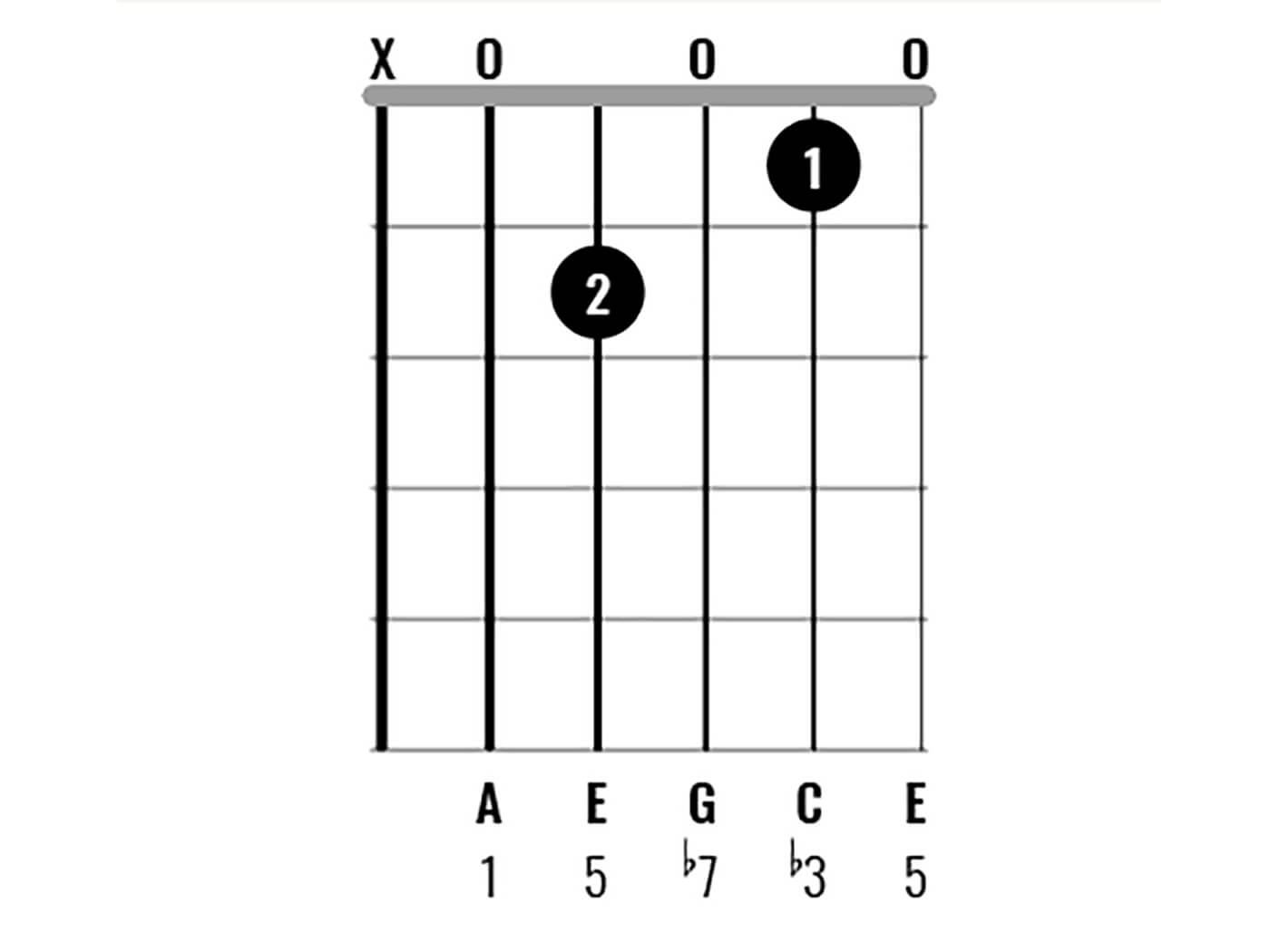 Removing finger three from the basic chord introduces the open G string, the minor seventh, and produces an A minor seven chord. Minor sevenths seem more mellow than the plain minor chord, with a hint of jazzy ambiguity. Try recording a loop on Am7 and D7 and playing a Santana style solo using an A blues scale. 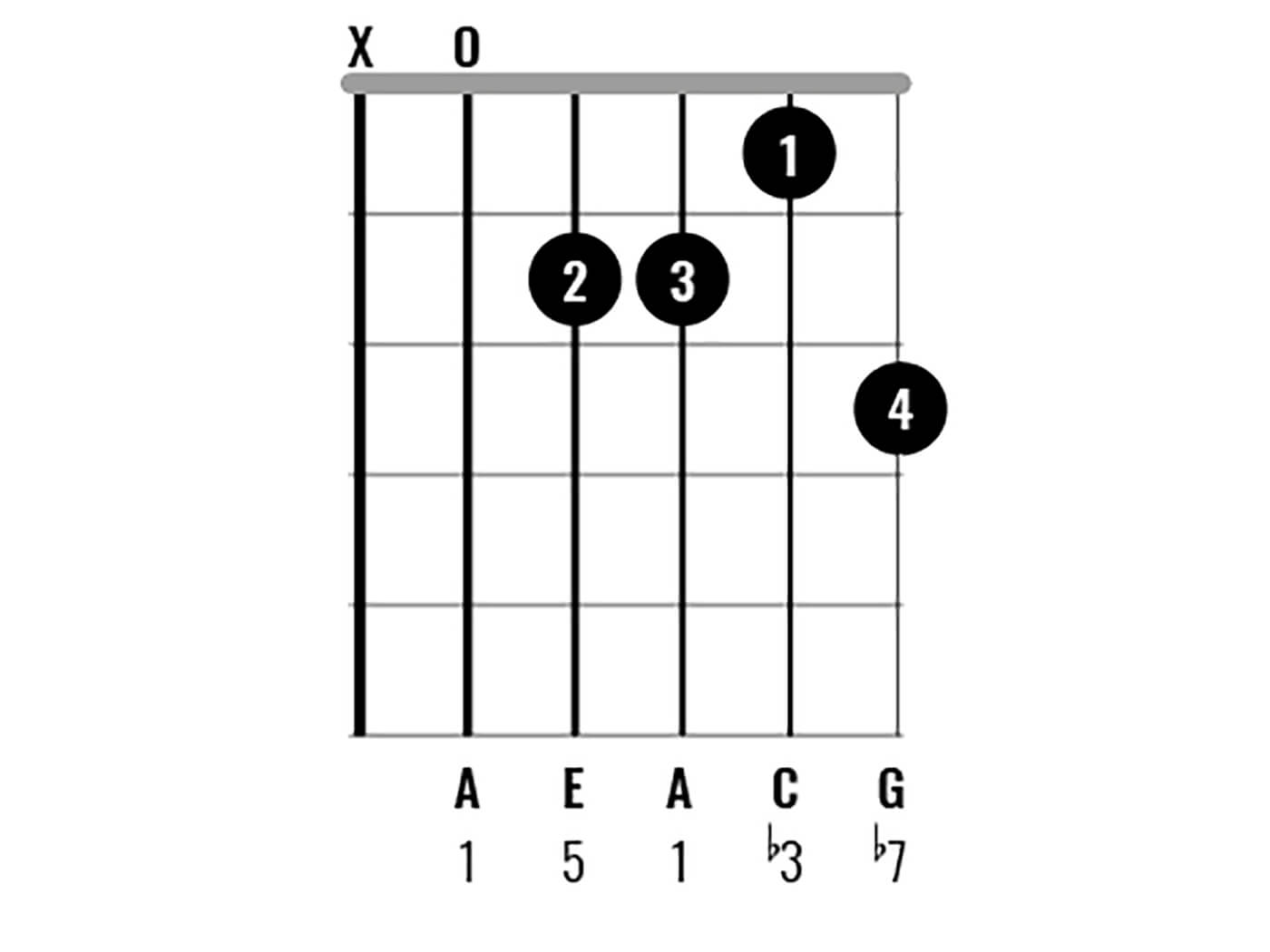 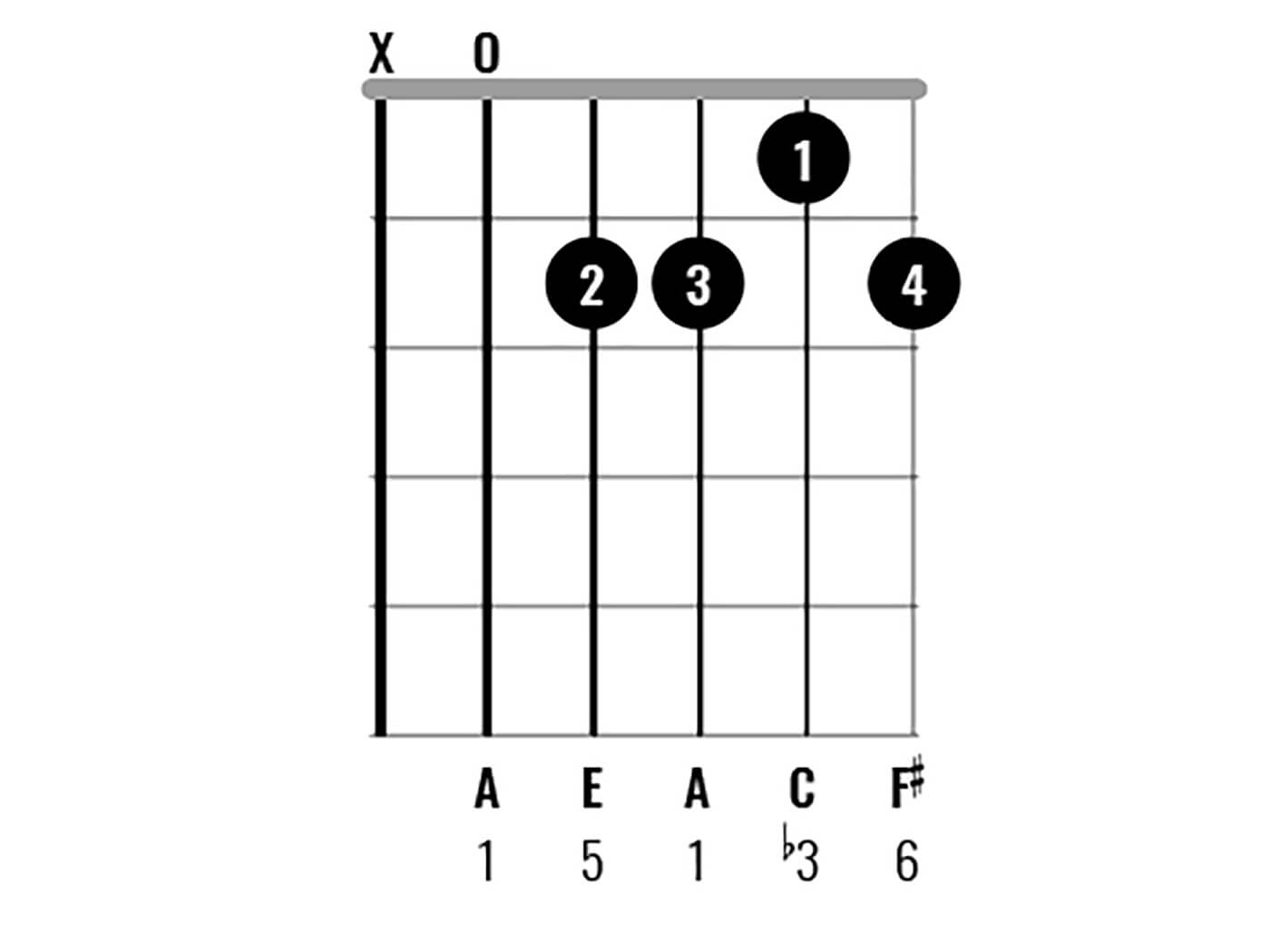 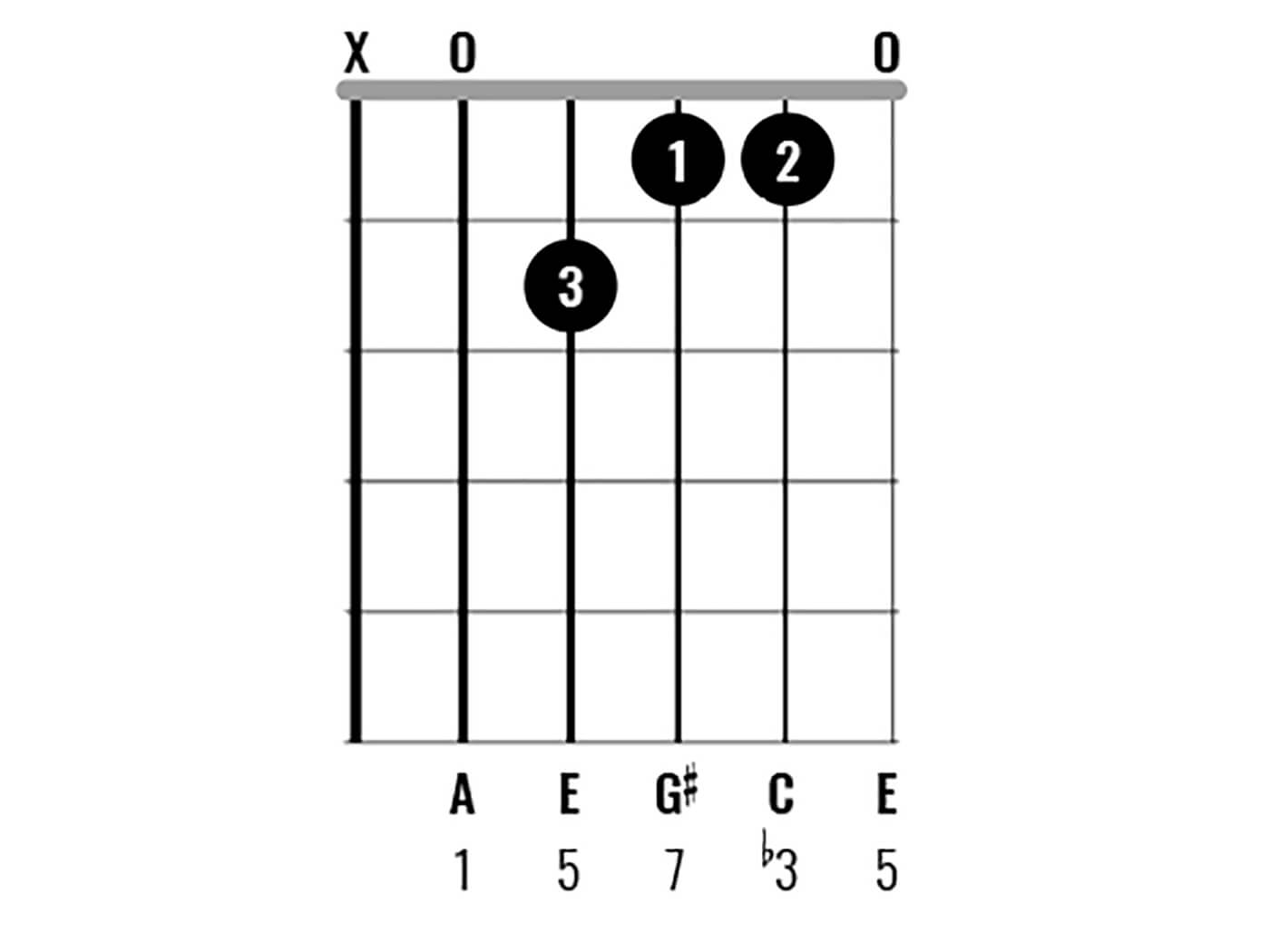 If you can add a major sixth to a minor chord it figures you can also add a major seventh. Here, we drop back down the octave to add G sharp to our A minor shape. A minor major seven is a chord full of mystery and ambiguity, but it is not as uncommon as you might think, particularly as a passing chord between A minor and A minor seven. Try adding D7 at the end of this sequence.