We’re taking a look at some interesting shapes and variations on the trusty G major chord. 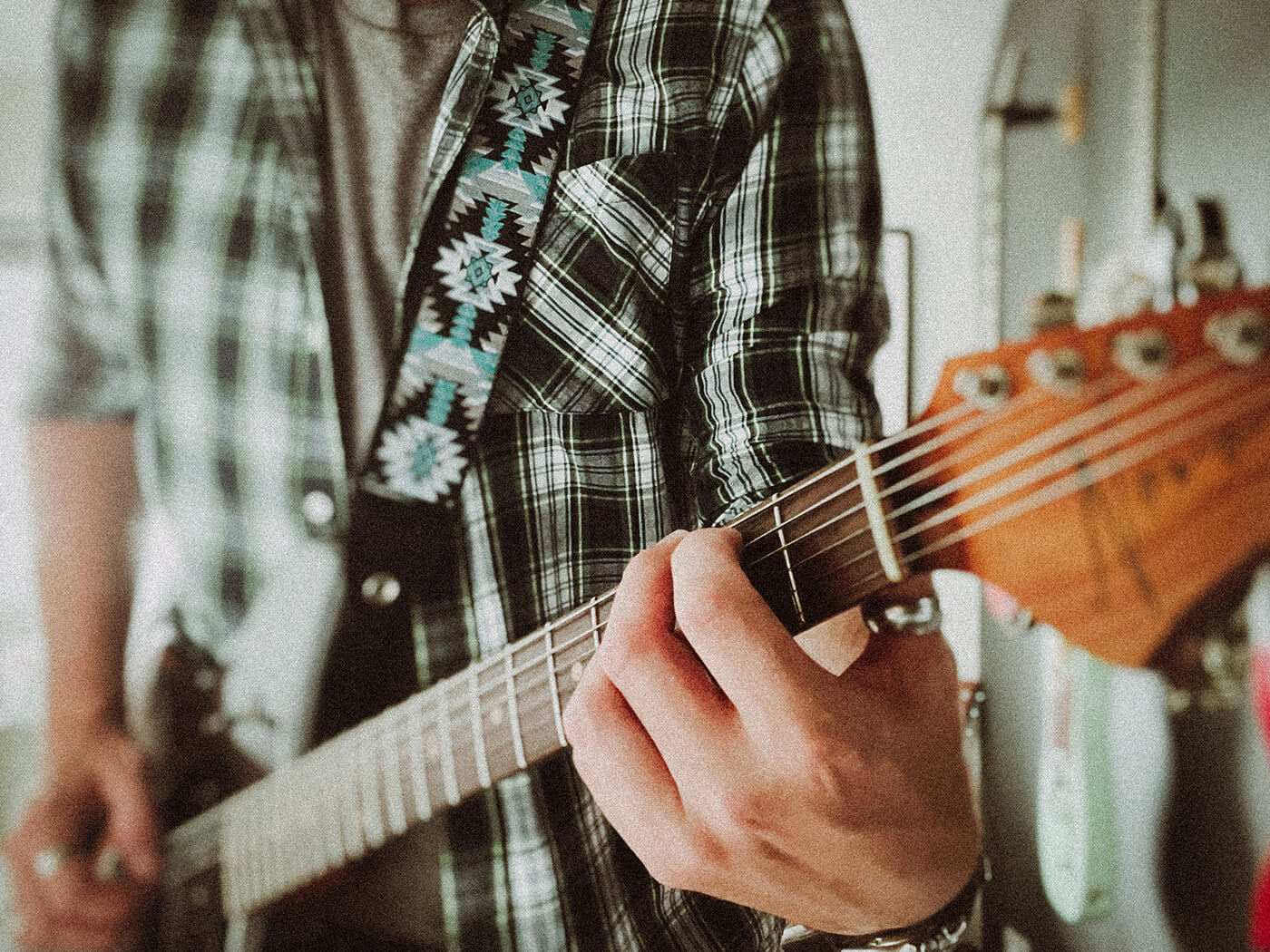 In its basic form, G major is not the easiest chord to hold down on guitar, involving a big stretch across the fingerboard that can be a challenge to beginners. It’s worth persevering with, however, as G major has great potential as a key; C major and D major (chords IV and V in the key) are available as open string chords, as are chords II and VI, A minor and E minor. This means all the essential chords in the key of G are easy to play without using a barre.

As a result, G is very popular key with singer-songwriters. Equipped with a capo to transpose to a key that suits your voice, huge numbers of new and exciting or old and existing songs will fall under your fingers.

The notes of G major are G, B and D. These are the root, major third and perfect fifth, steps one, three and five of a G major scale. The way that G major fits on the guitar makes it easy to flavour the basic chord with interesting notes like sixths, sevenths and ninths. Enjoy exploring these chords – see you next month. 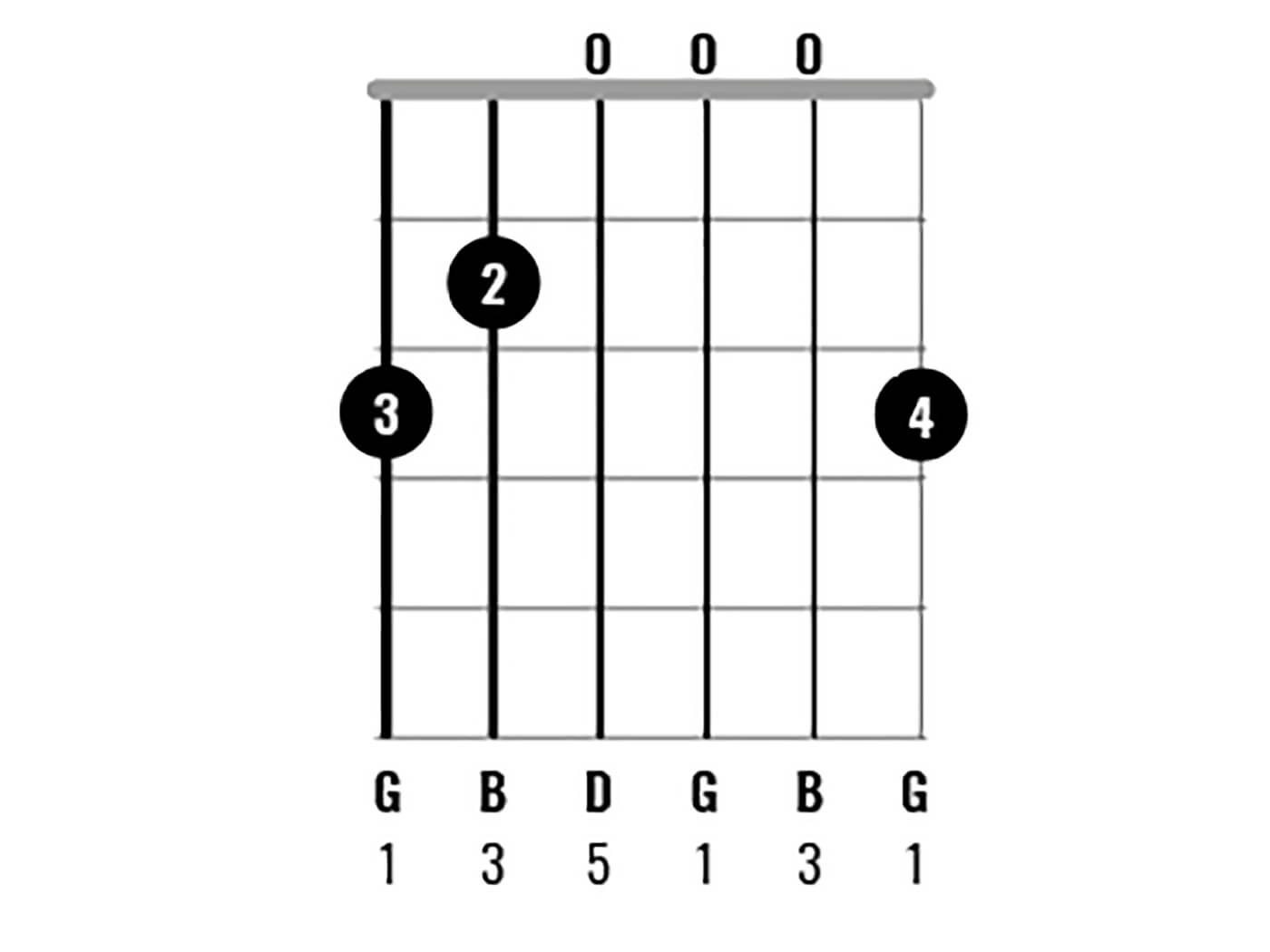 Some guitarists find the low B troubling; in classical teaching doubling the major third in a chord is considered poor practice although examples of it abound. Leaving out the low B cleans out the low end and makes the chord easier to play, provided you can mute the A string with the underside of finger three. In general, we like this voicing more. 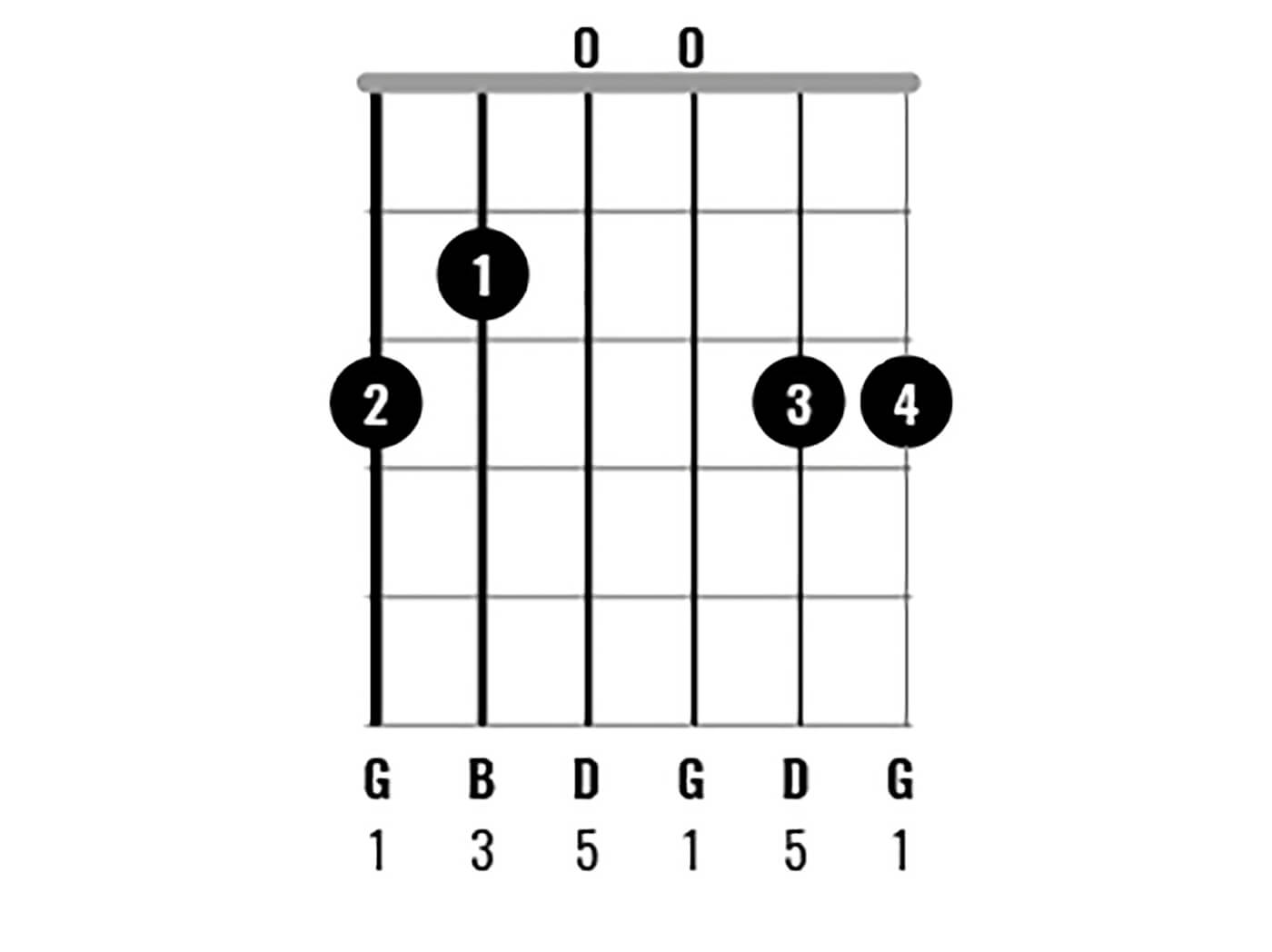 Another way of avoiding the doubled third is to double the fifth instead. The fifth has a hollower quality and doesn’t suffer from the turgidness of a major third, and there is energy and power in this voicing, which makes it the go-to version of G for many players. It sounds great with a capo on the second fret or higher and is one of the chords in the iconic Wonderwall. 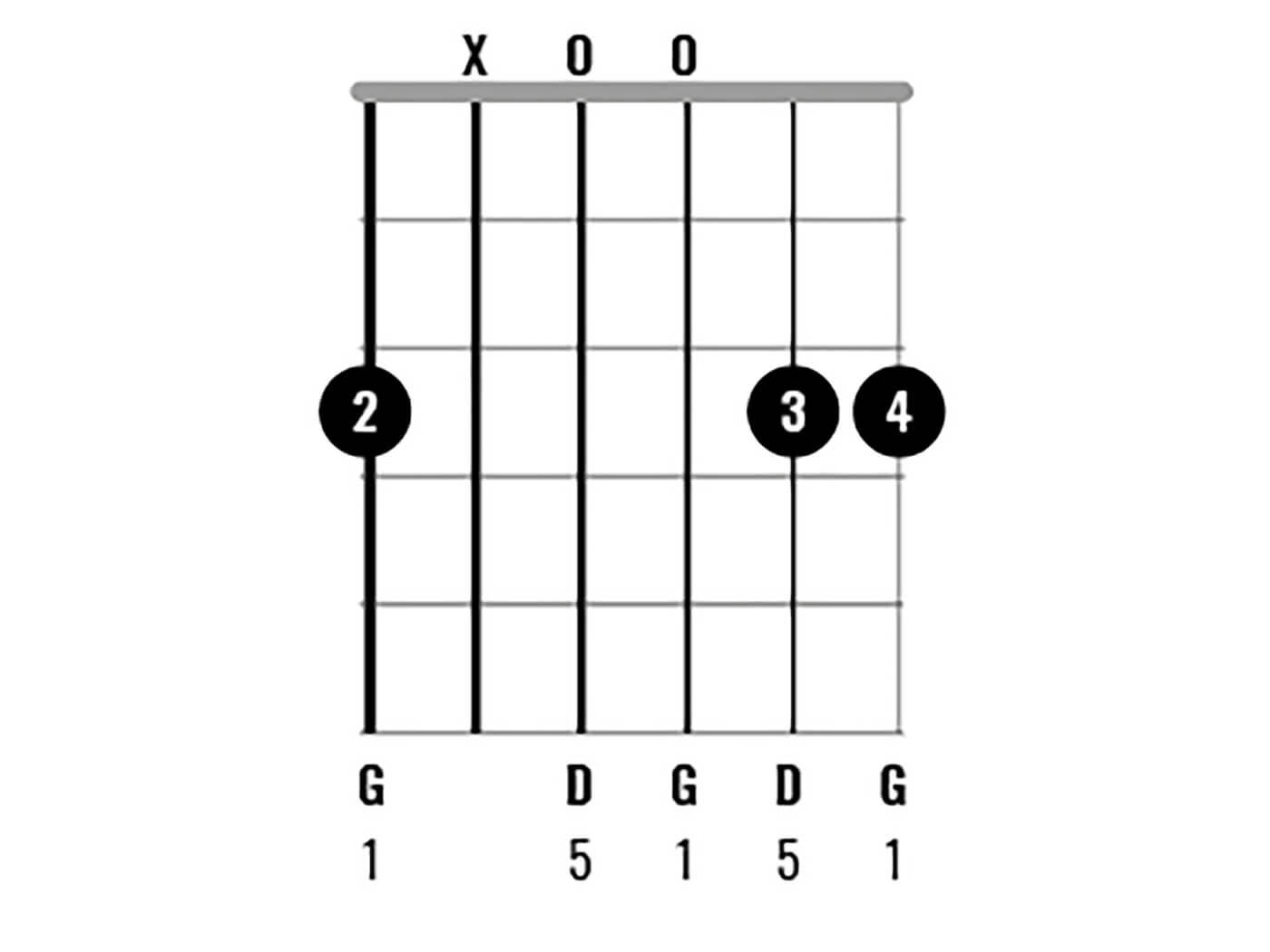 Though not technically G major we couldn’t resist including this G5 (“G five”) chord which does away with a major third altogether as it contains just roots and fifths. 5-chords have an open ringing quality which means they cope better with distortion than their major chord equivalents. Do you feel a Lynyrd Skynyrd riff coming on? 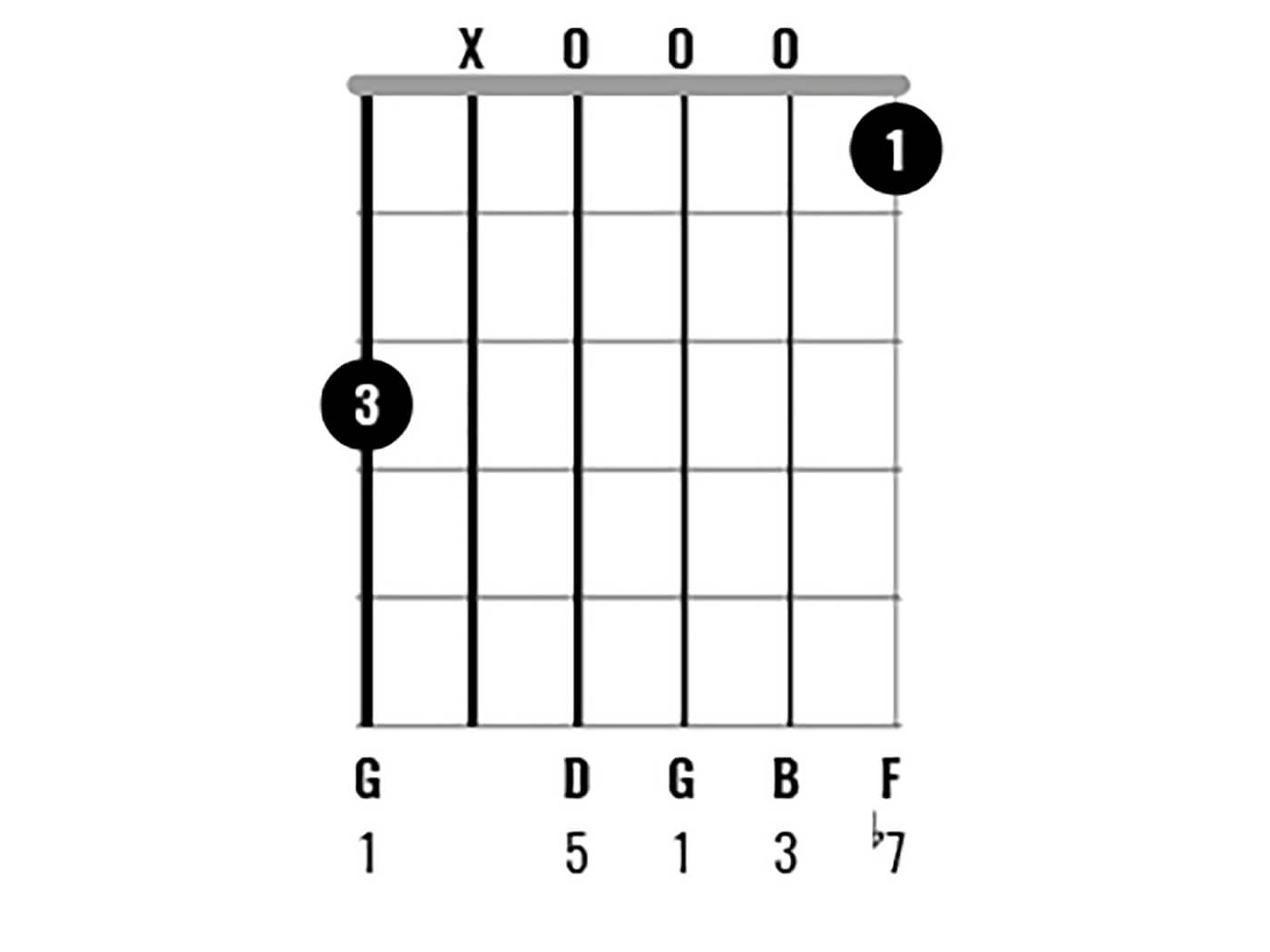 When you add a minor seventh to a major chord you get a seventh chord; in this case we have added F to make G7. We used figure 2 as a starting point, but it works with figure 1 as well. G7 is chord V in C, so try playing a C major chord after G7 and you’ll hear chord V resolving to chord I. This works because the tension between the notes B and F in the G7 chord is resolved when they arrive on C and E. 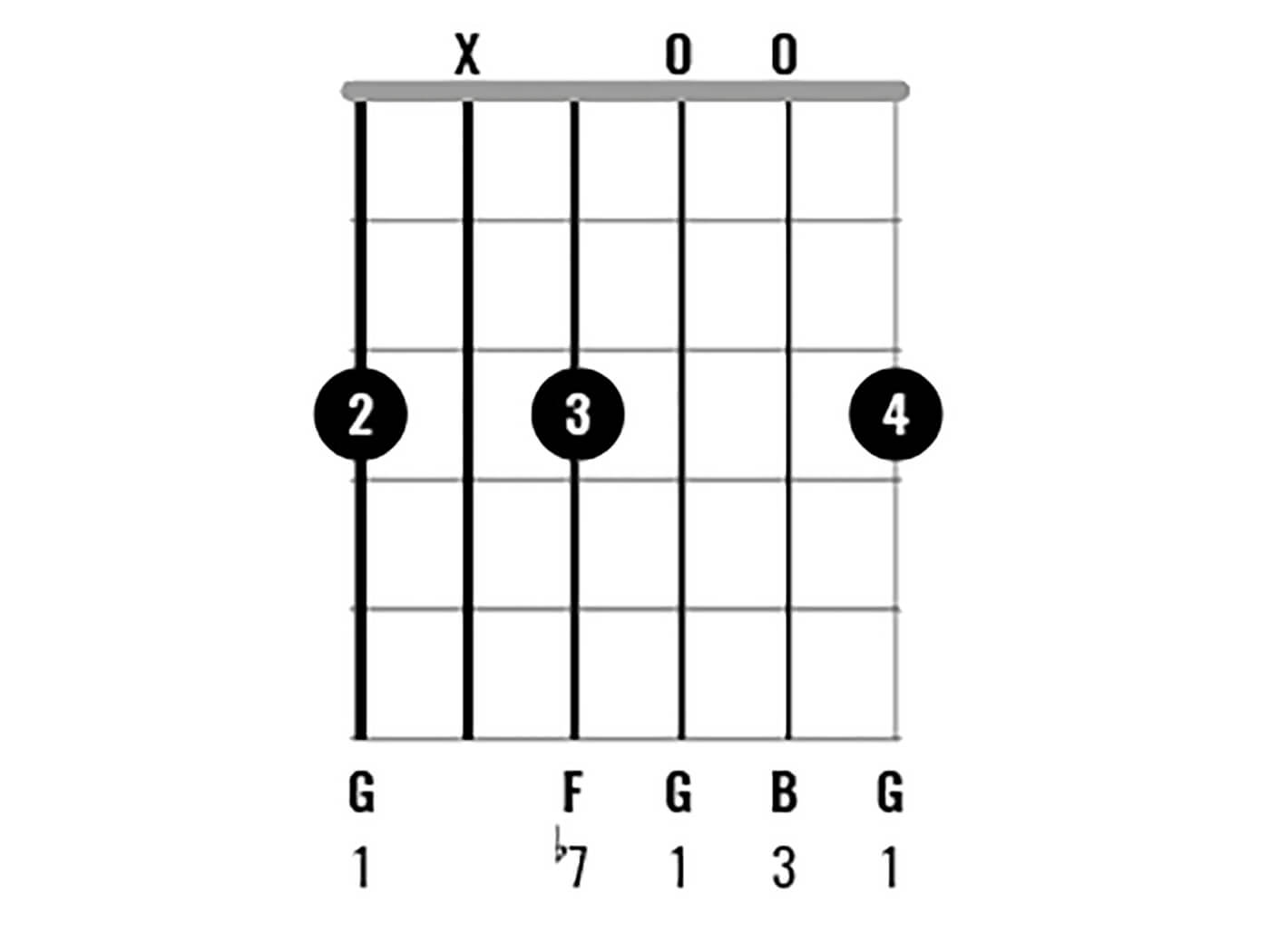 The high F in figure 5 can sound piercing, and we like the idea of moving the interesting note in a chord to the lower octave. Here, we’ve moved the F to the D string. Try switching to a C major chord again, this time leaving your fourth finger on the high G on the top string. It works particularly well if you can pick an alternating bass with your thumb and arpeggios with your fingers. 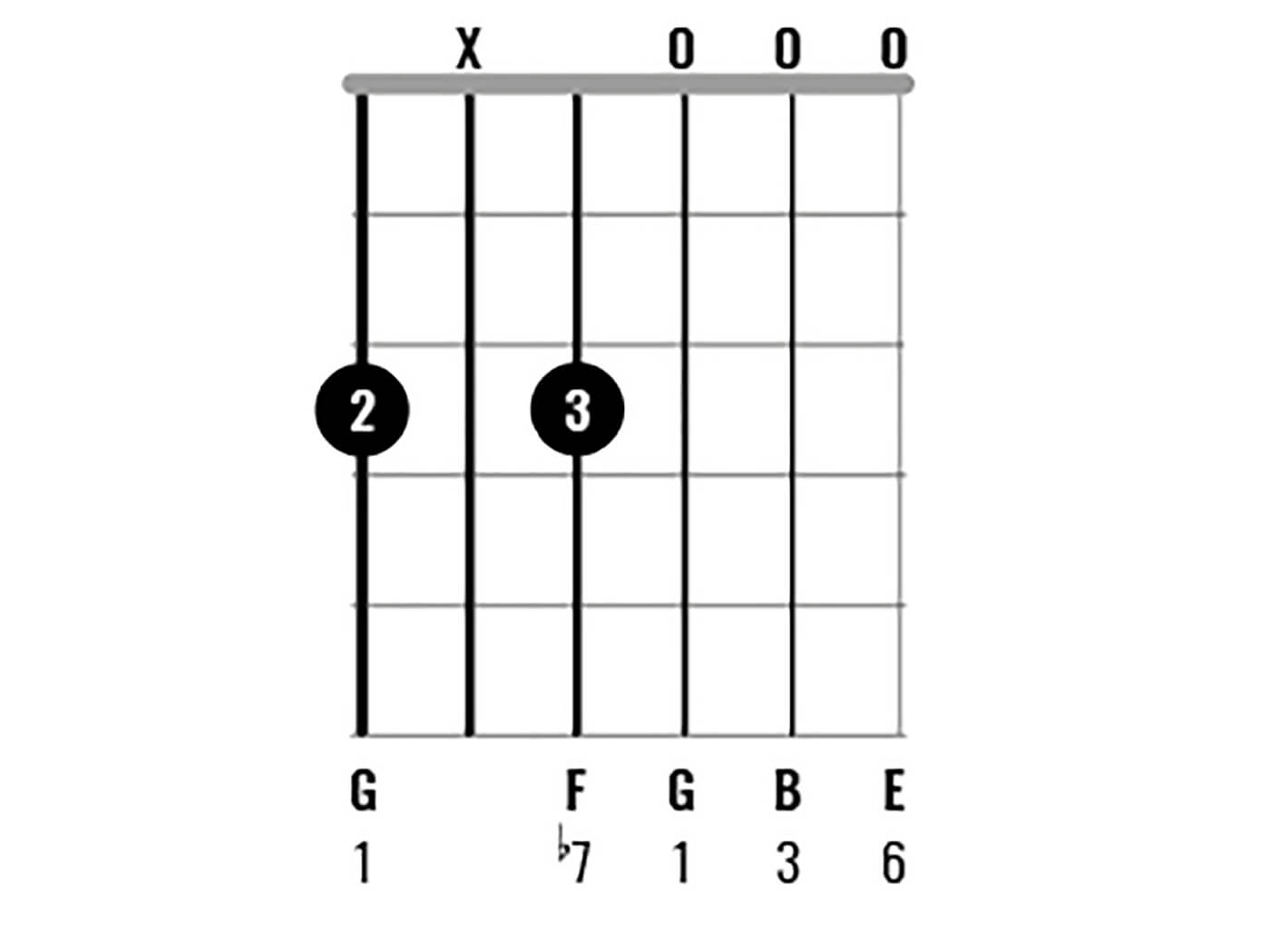 Technically, a 13th chord should include the ninth, but guitarists often dodge such details when a good voicing falls under the fingers, especially if it means simply releasing a finger from the chord. Some theorists would describe this chord as G7/6, the sixth coming from the open E string. Try following this one with C major seven for a dreamy V – I progression where the top notes of the chord stay the same. 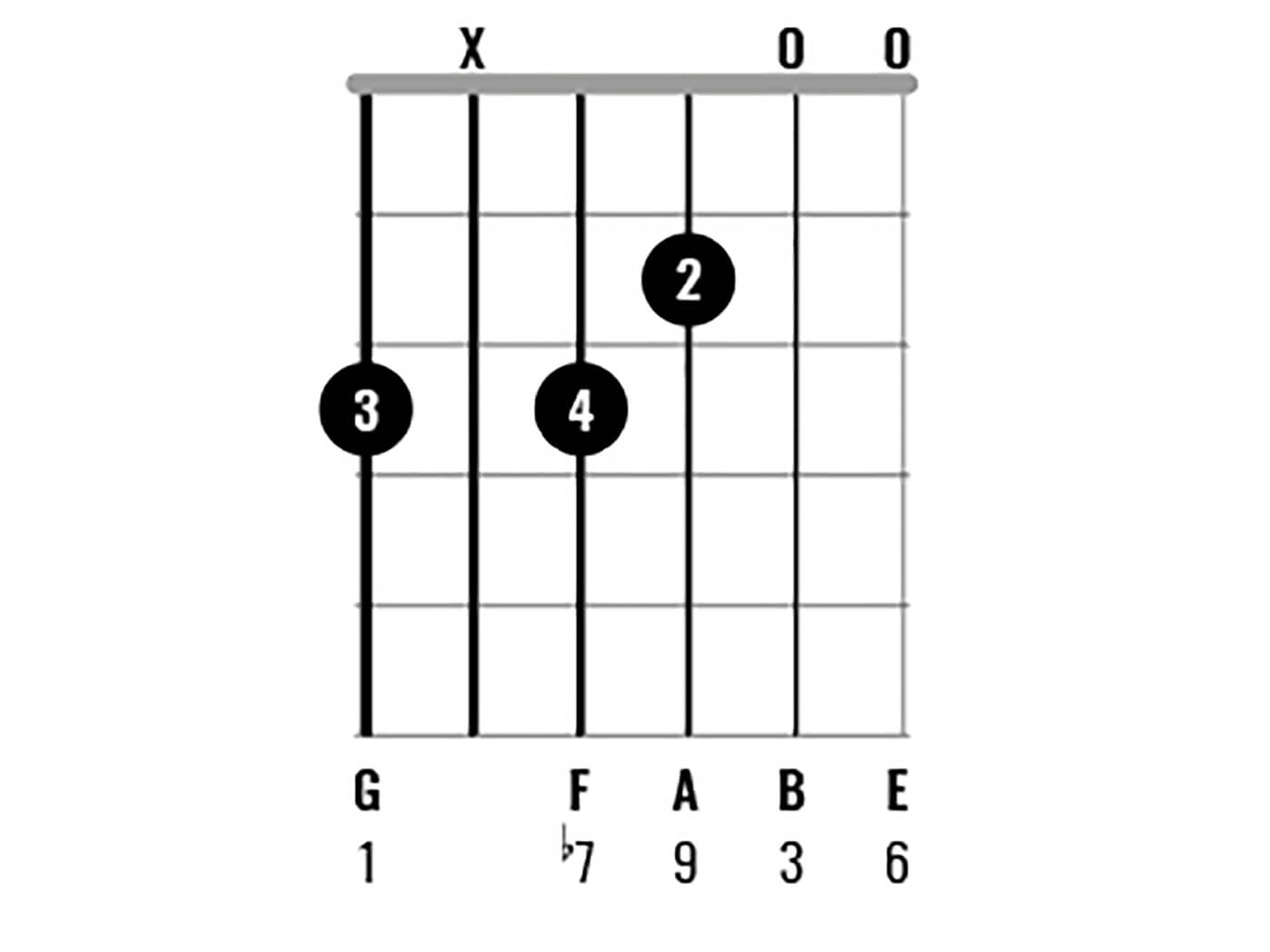 Here you get the full fat 13th chord, with the ninth added on the G string. This also sounds good followed by Cmaj7, but this time see if you can keep the A on the G string sounding in both chords, so that the C major chord becomes Cmaj13. This C chord would be a 13th which omits the ninth. Though these are jazzy chords there’s a breeziness to these open string voicings reminiscent of Neil Young or Paul Simon’s more romantic moments. 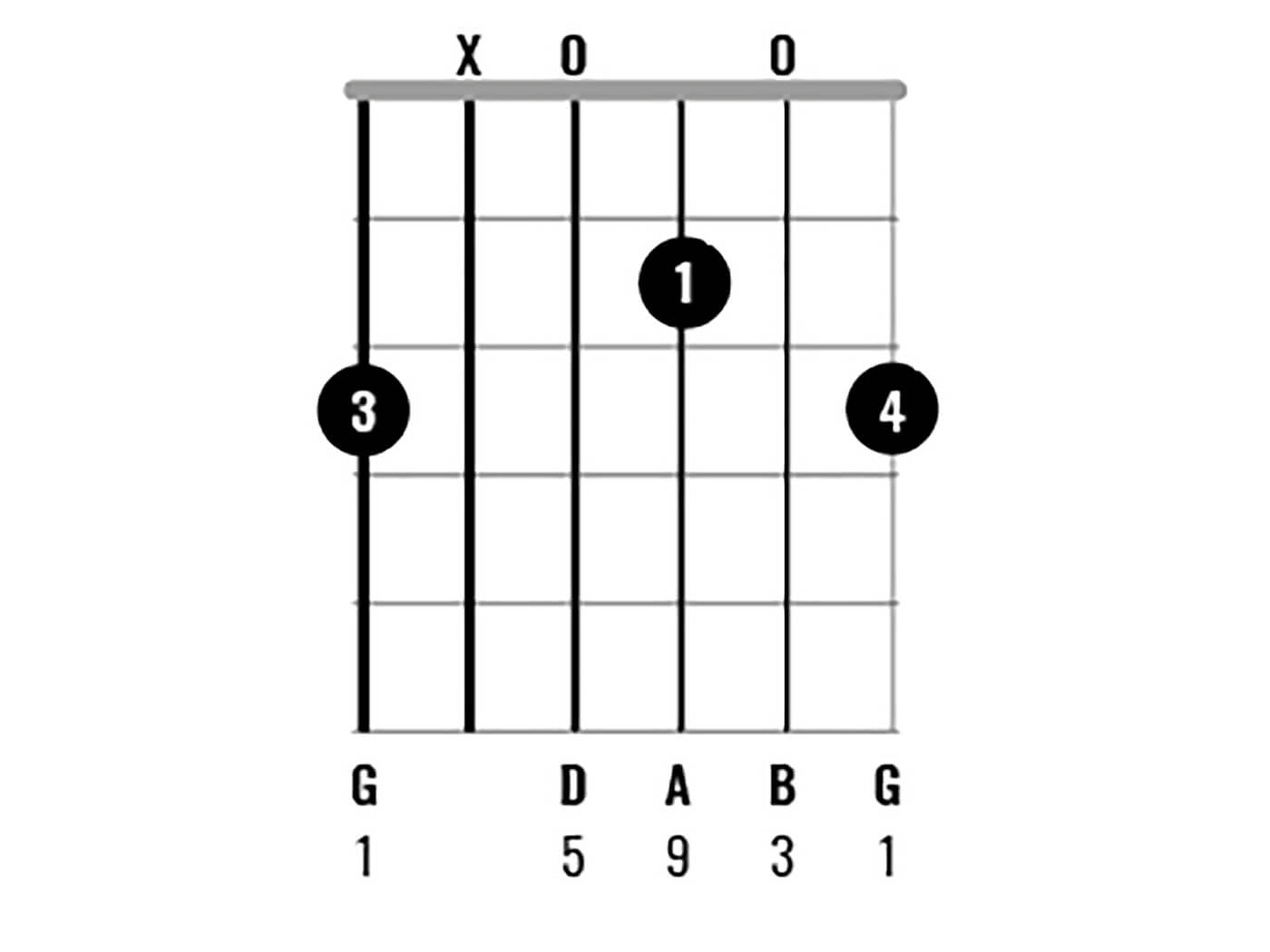 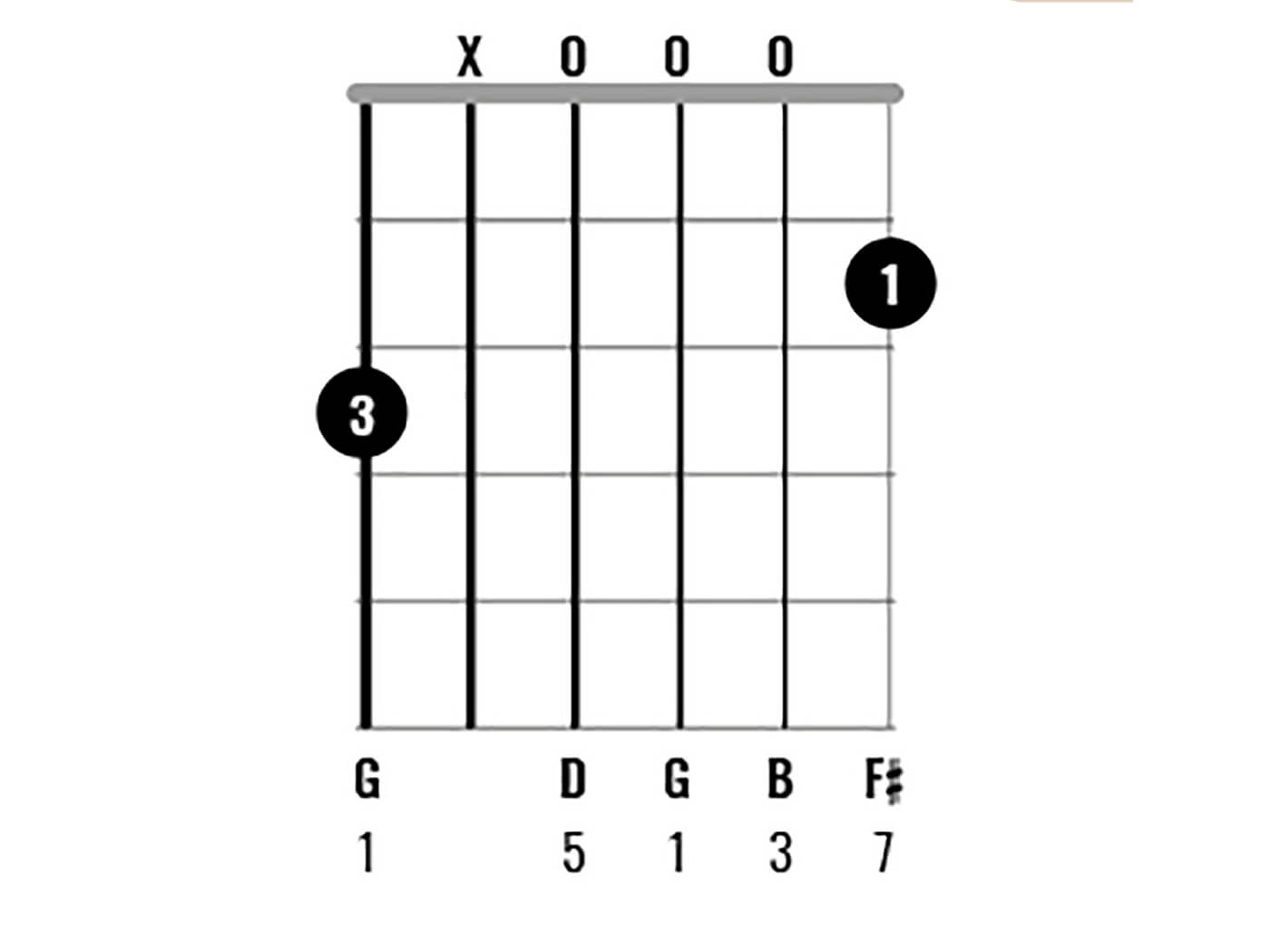 F sharp is the major seventh over G, so you won’t be surprised that adding it to G major makes a G major seven chord. This is one of the chords which gives the intro to Billie Eilish’s idontwannabeyouanymore its wistful and dreamy quality, a property of major sevenths generally. Try playing G, Gmaj7, G7 before going on to C and C minor to hear how these chords can work together.