Our exploration of the interesting variations on classic chords to add some variety and interest to your playing and songwriting moves to that most central of chords, C major. 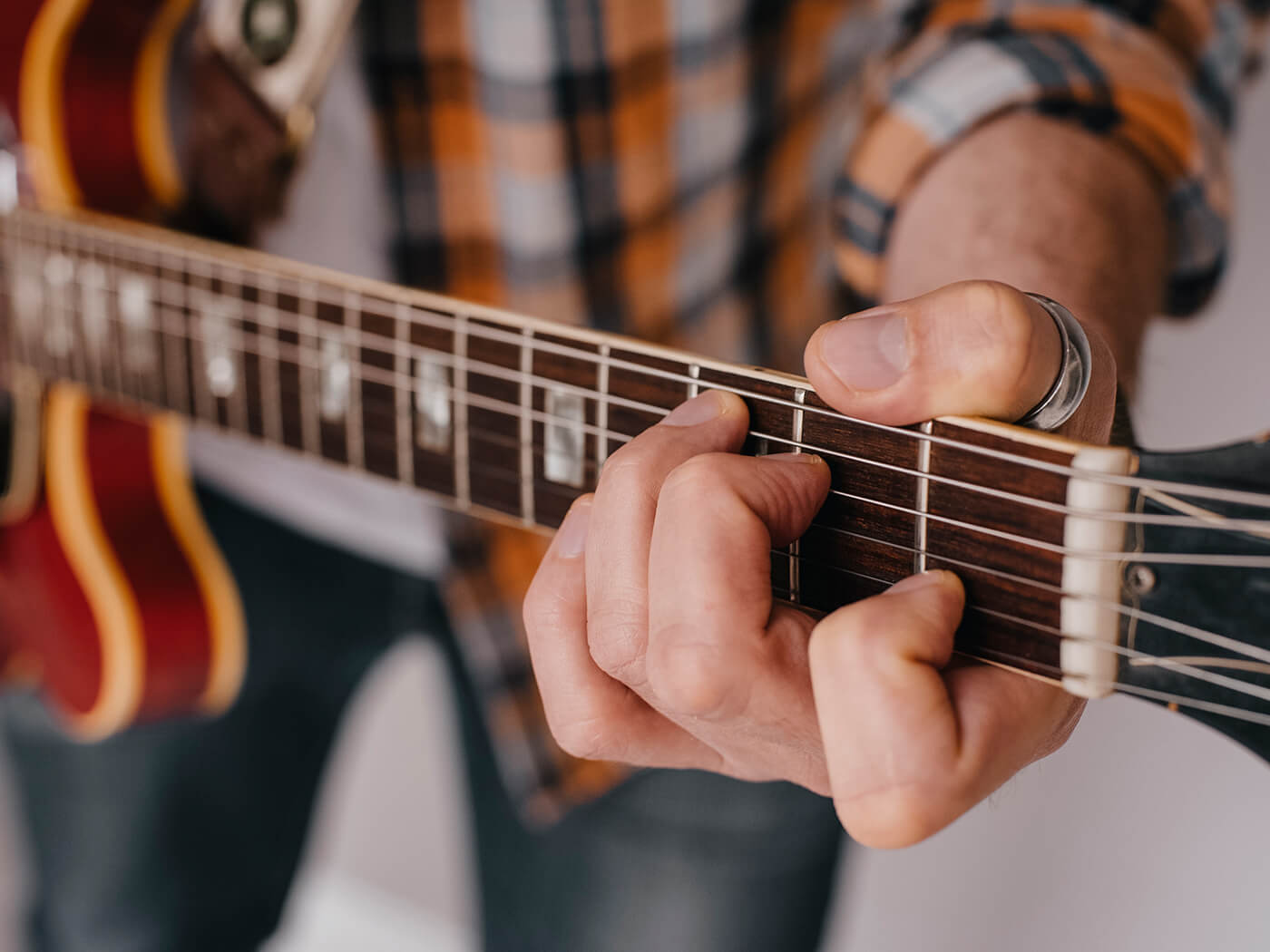 C major is justifiably the first chord that most beginner guitarists learn on the guitar. It’s not hard to play, and when combined with F and G gives you chords I, IV and V in the key of C major, opening the way to a vast number of campfire-type songs that use these three common chords. Add A minor (chord VI) and you have the four chords that are found most often in song writing since the 1950s.

C major is also chord IV in the key of G; add in D and E minor and you now have the same four I, IV, V and VI chords in G major. With a capo to transpose to any key – or to the key that suits your voice, the road to singer-songwriter superhero status lies open before you.

The notes of C major are C, E and G. These are root, major third and perfect fifth, steps 1, 3 and 5 of a C major scale. Enjoy playing these examples and we’ll be back next month with more delicious chordal wonders. 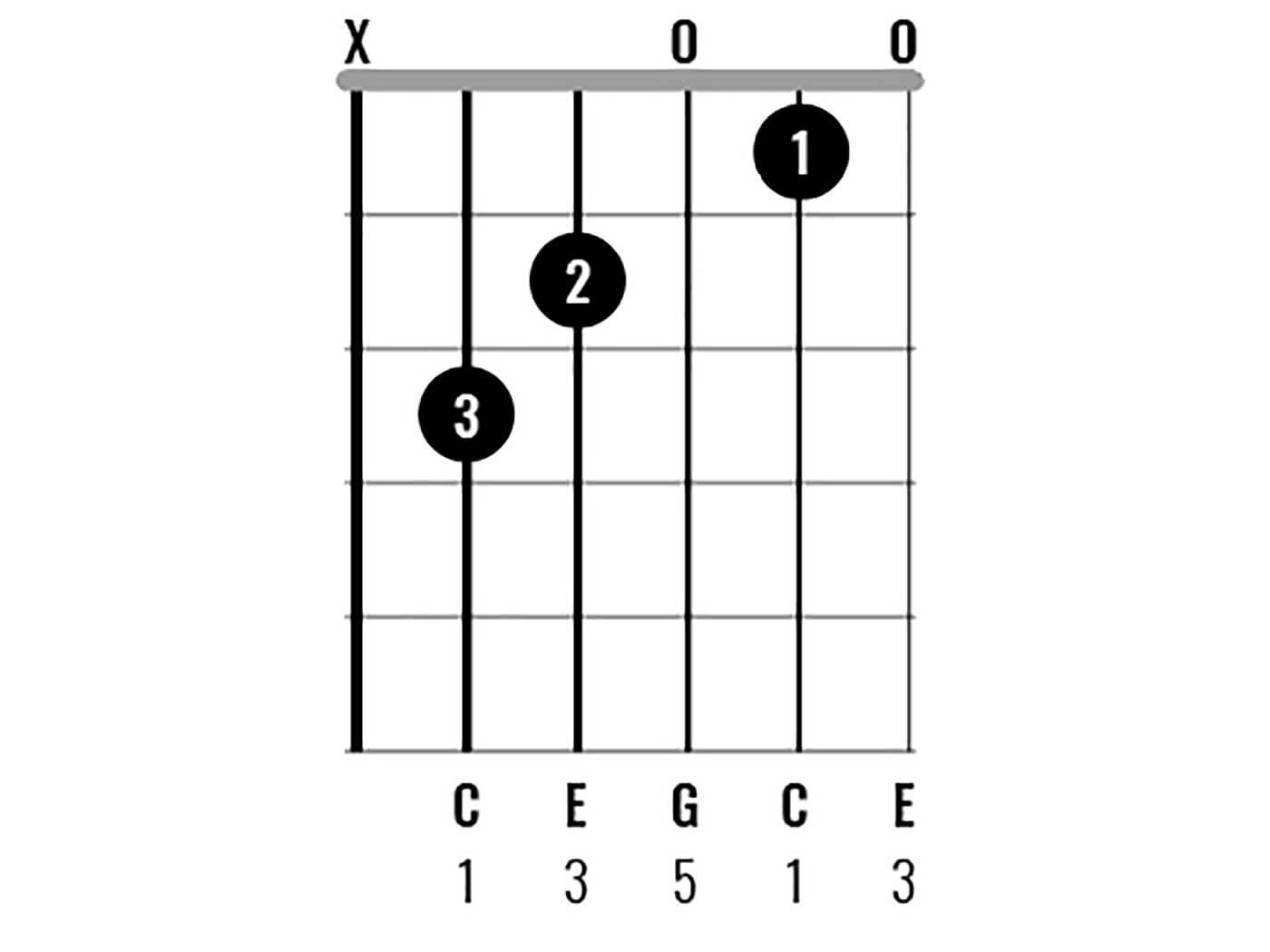 Make sure all five notes are ringing – it can be tricky to hold finger two on the D string and still get the open G to sound cleanly. Avoid playing the open sixth string as chords sound best with the root note in the bass. You can mute the sixth string with the tip of your third finger or with your thumb over the edge of the neck. Or just be careful not to hit it with the pick. With the open E in the bass you would be playing C/E, useful for a brief moment if you are heading towards F. 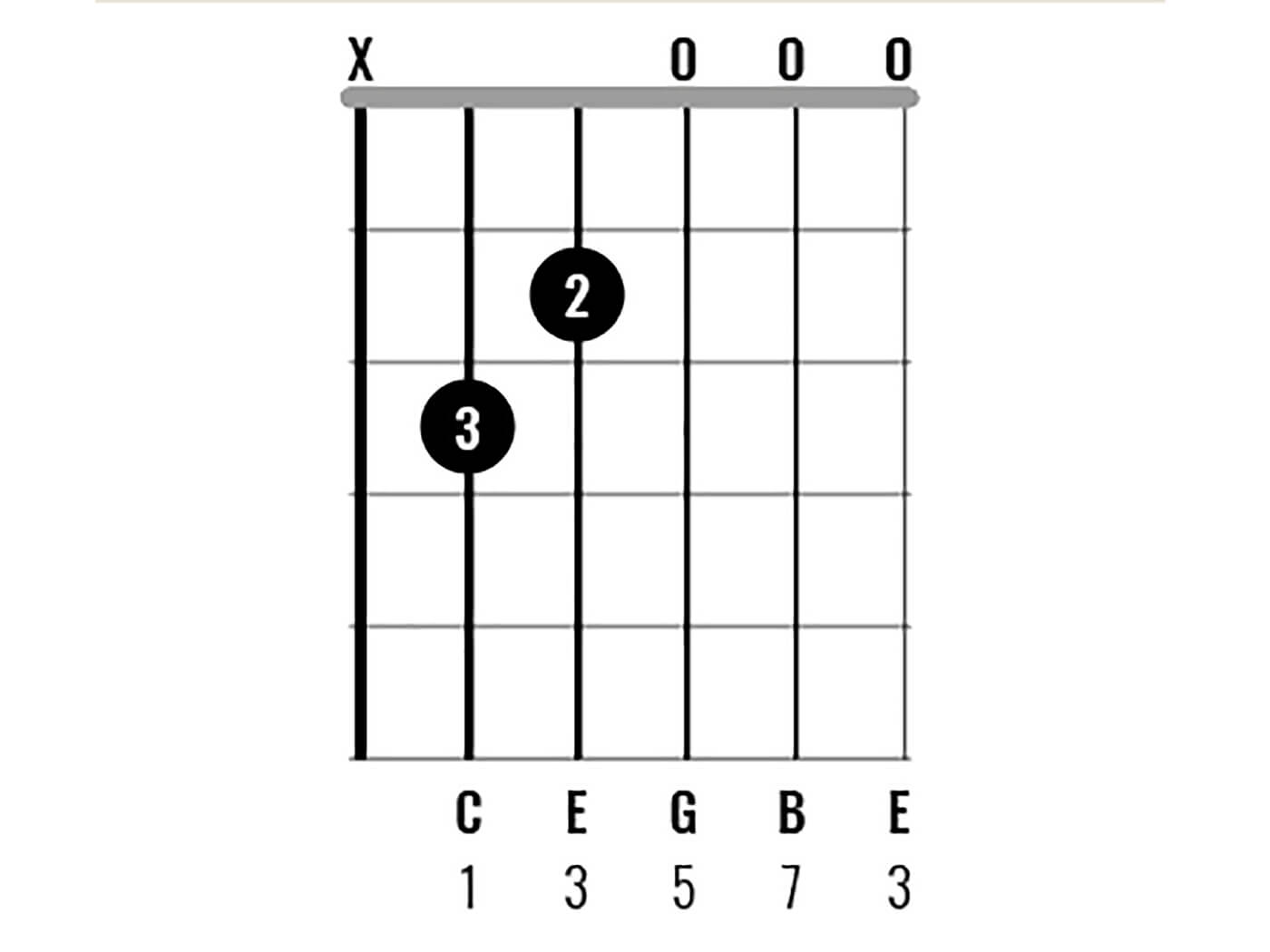 Leaving the first finger off the basic C chord introduces the open B string, which is the major seventh and creates a dreamy C major seven chord. Pair it with an F major seven chord on your looper for a laid back two-chord groove. Then try soloing over it using a C major scale. 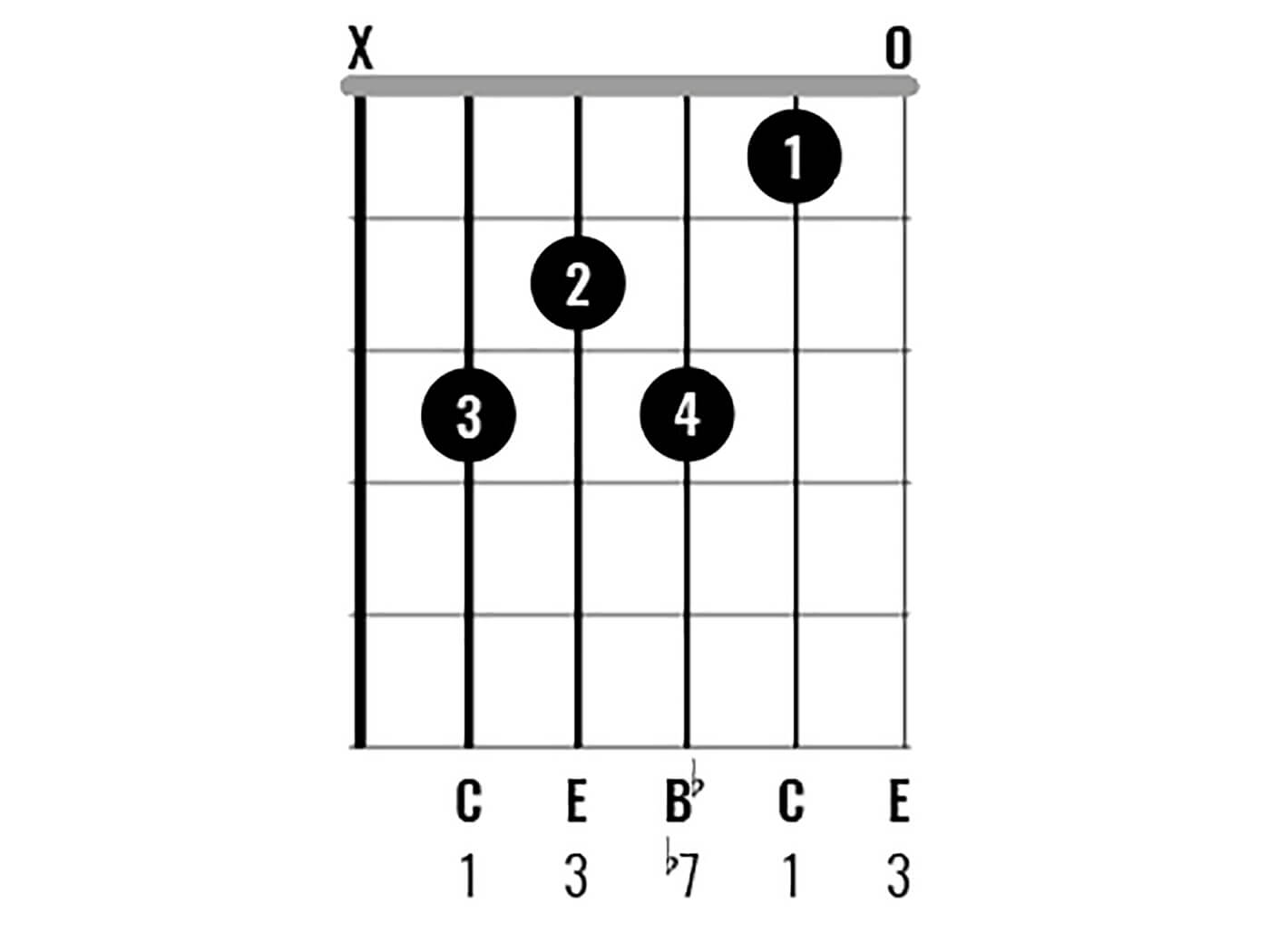 Bb is the minor-seventh above C and when added to the basic triad makes a C7 chord. This is the type known as a “dominant” chord. C7 is chord V in F, and if you play figures 1, 2 and 3 you get a distinctive and strong chord sequence. Follow on to F or A7 and you’ll have the start of a pop hit on your hands, hinting at many examples from artists as diverse as Sinatra, Bowie, S Club 7 or George Harrison. 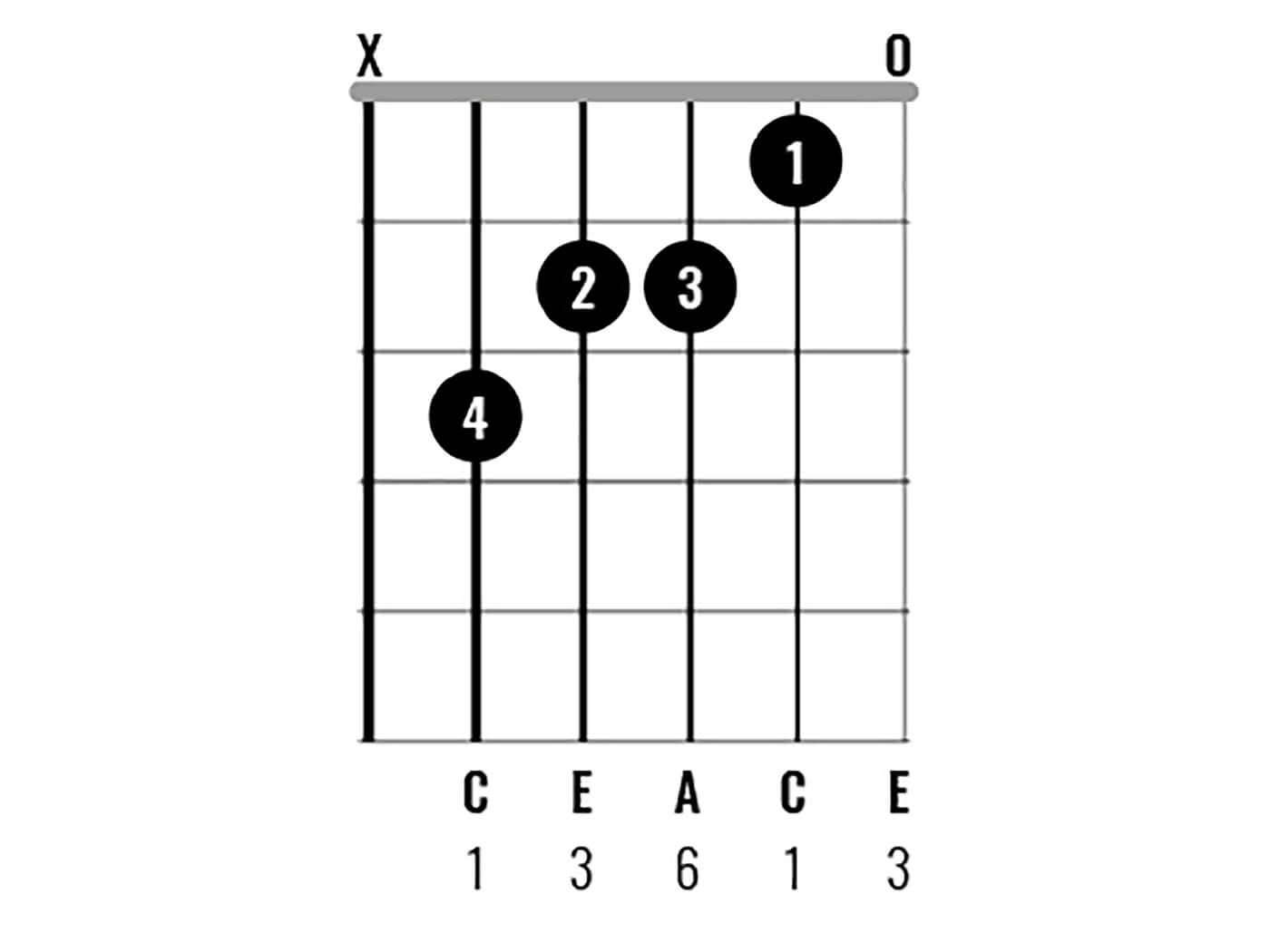 The major sixth is also often added to a major chord, though in this case it requires some re-fingering. No-one bothers to say “major sixth” any more, we tend to just call it “C six”. C, Cmaj7, C6 and back make another useful and commonly heard sequence. It’s a way of creating movement whilst essentially staying on the same harmony. 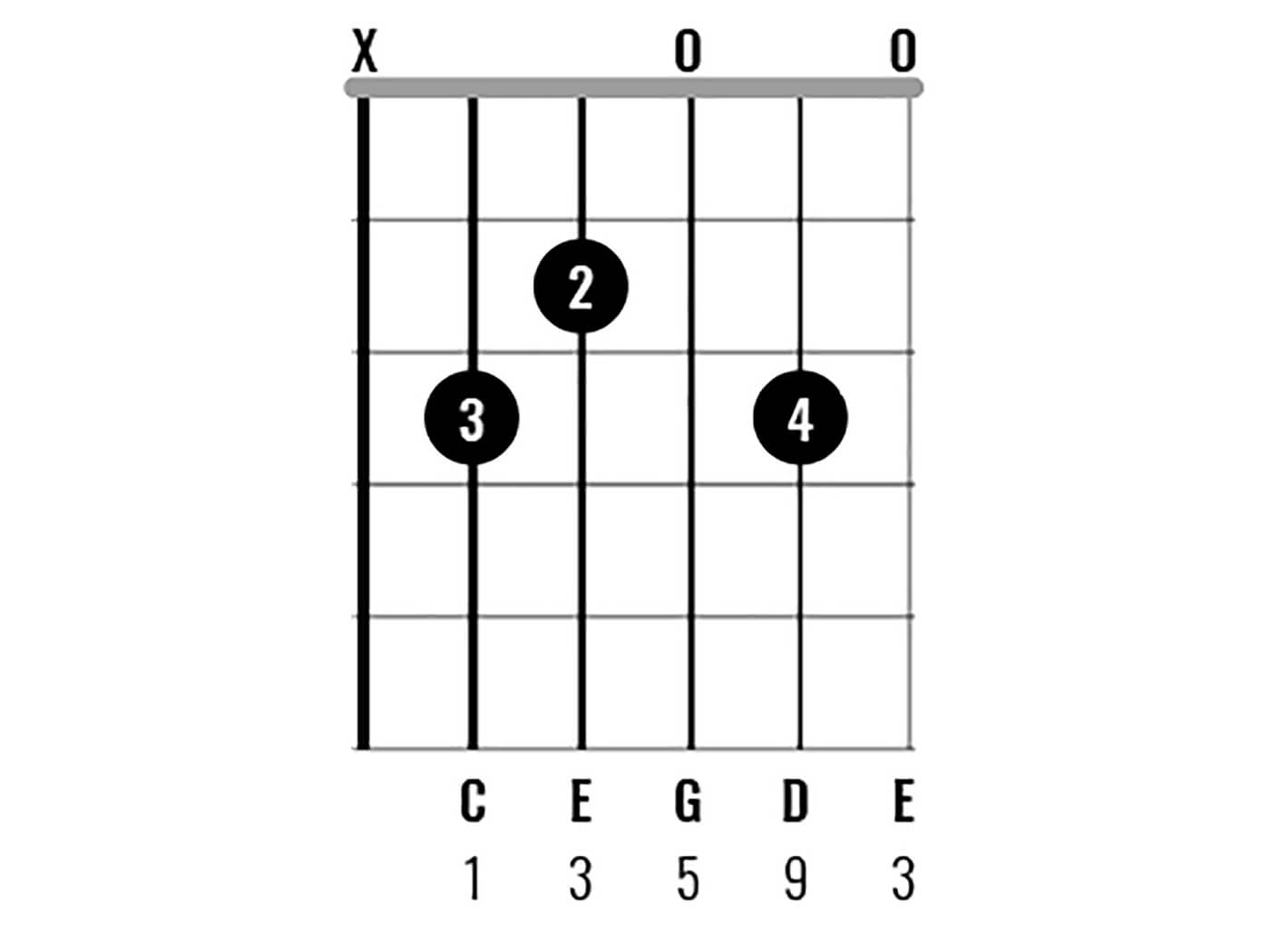 Moving finger four over to the B string will give you an “add nine” chord. This is what happens when you add the ninth (in this case D) and there is no seventh present. If there’s a seventh in the chord we would call it either C9 or Cmaj9, depending on whether it is the minor seventh (B♭) or major seventh (B-natural). Try experimenting with Cadd9, C, Cmaj7 and back to C. 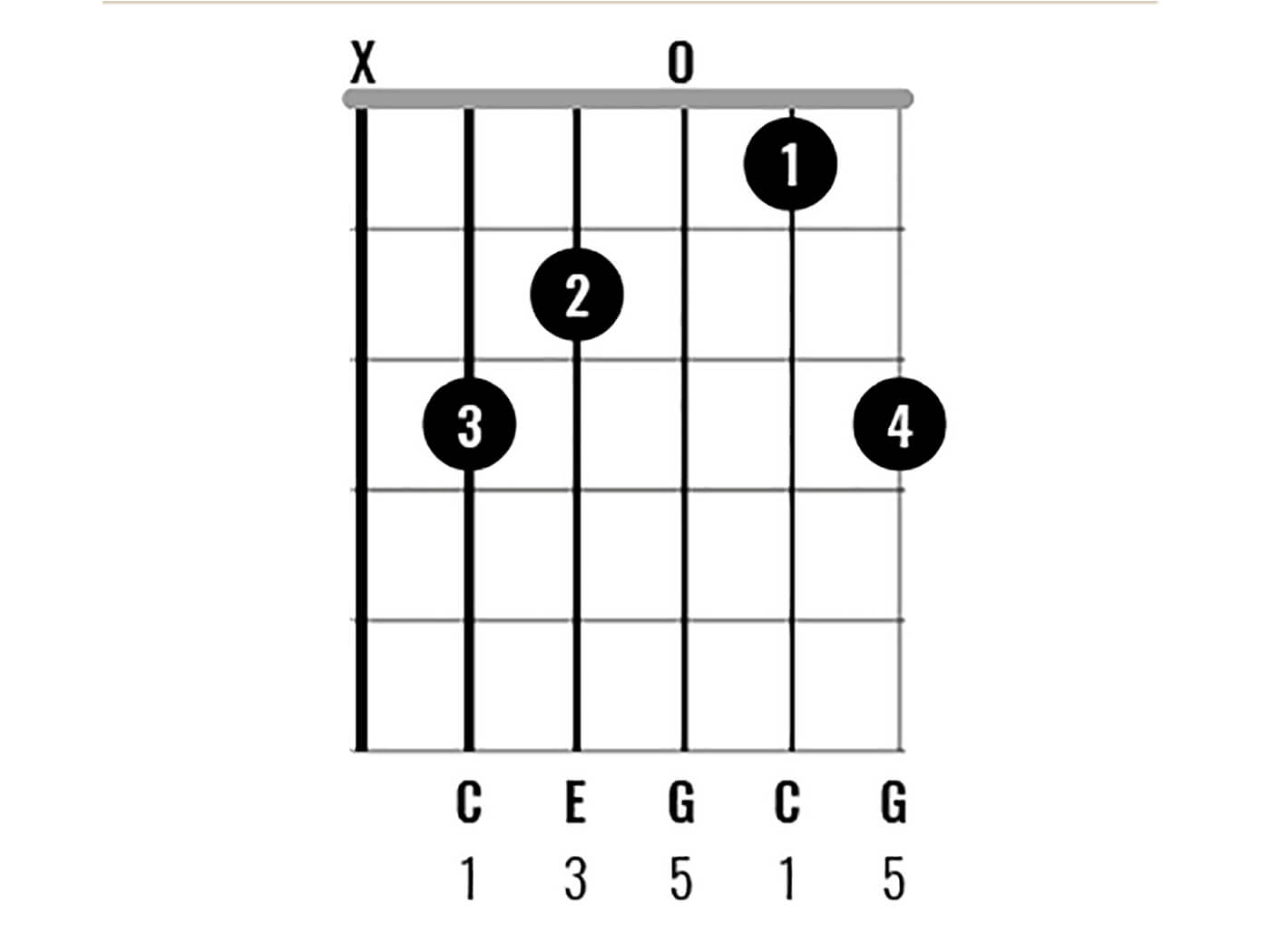 Continuing with our wandering fourth finger, in this example it’s on the top string at the third fret. This gives us the note G, which is already in the chord so it’s still C major, just in a different voicing. It seems to add a jangly quality, something to do with removing the doubled third and replacing it with a doubled fifth. 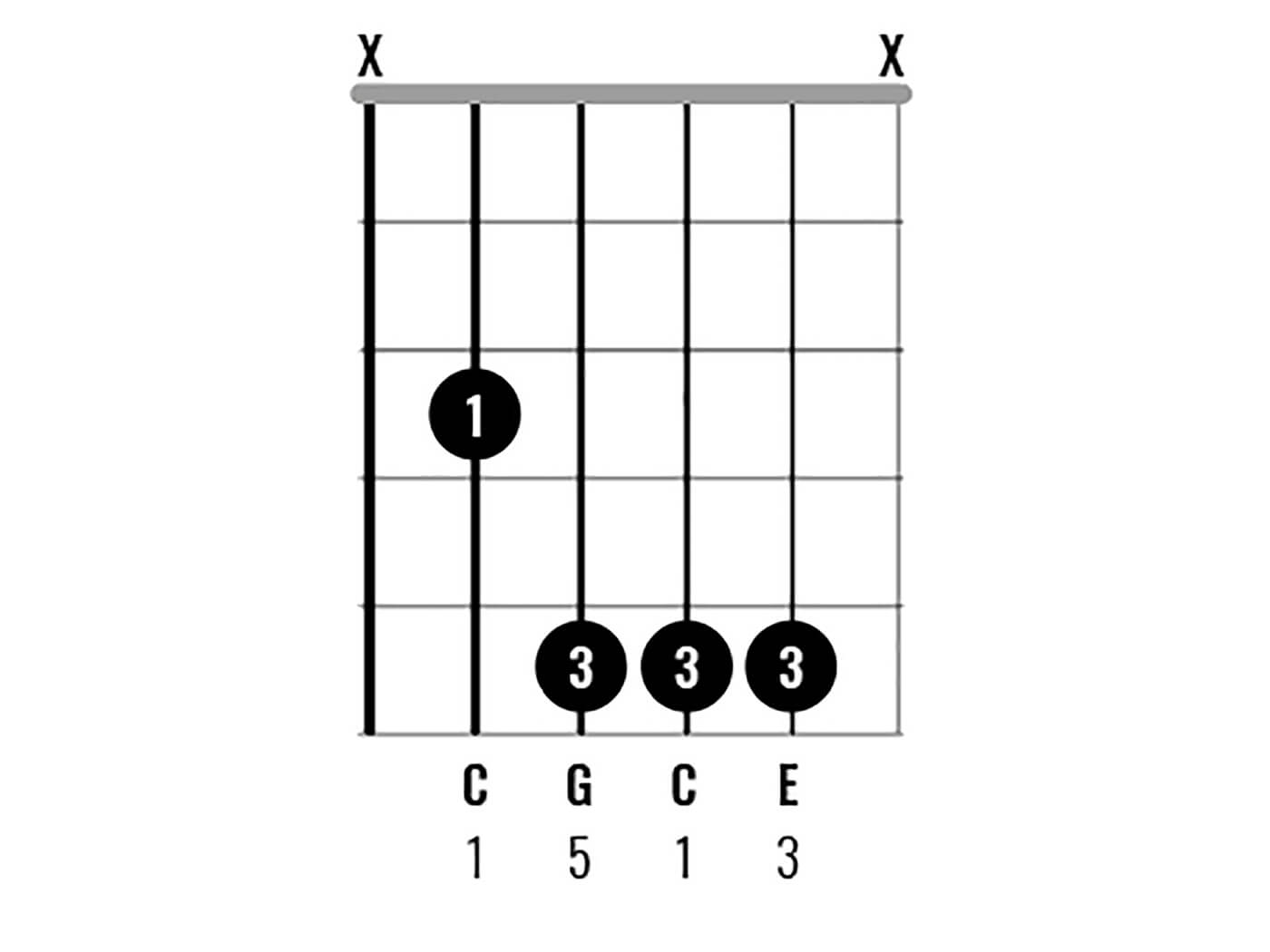 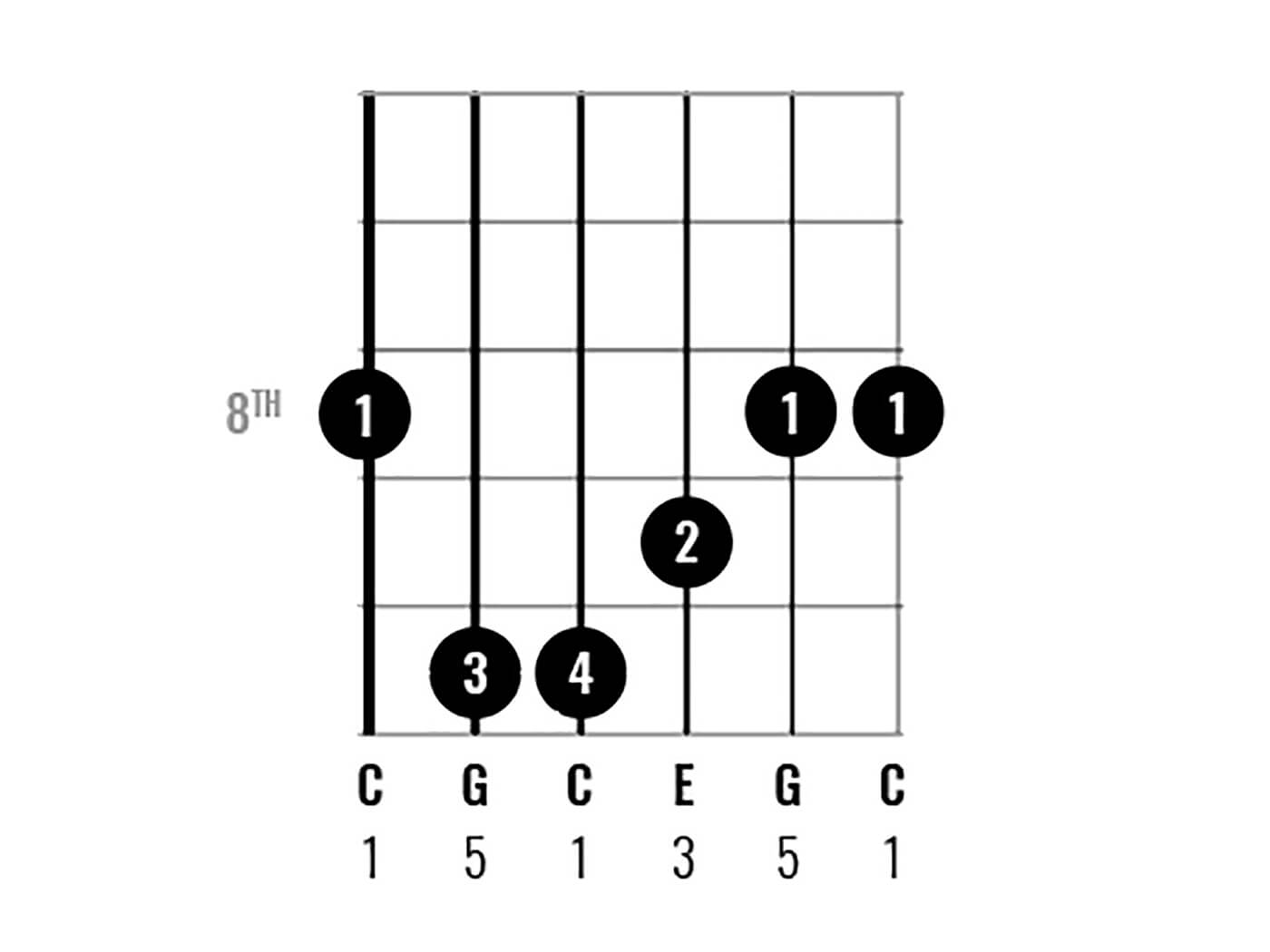 This is the other most popular C major chord played higher up the neck and is based on an E major open string chord moved eight frets higher. This is the full fat, six-string version, and is ideal for Townshend-style windmilling or punk-style thrashing. Move on to figure 9 for the more refined version. 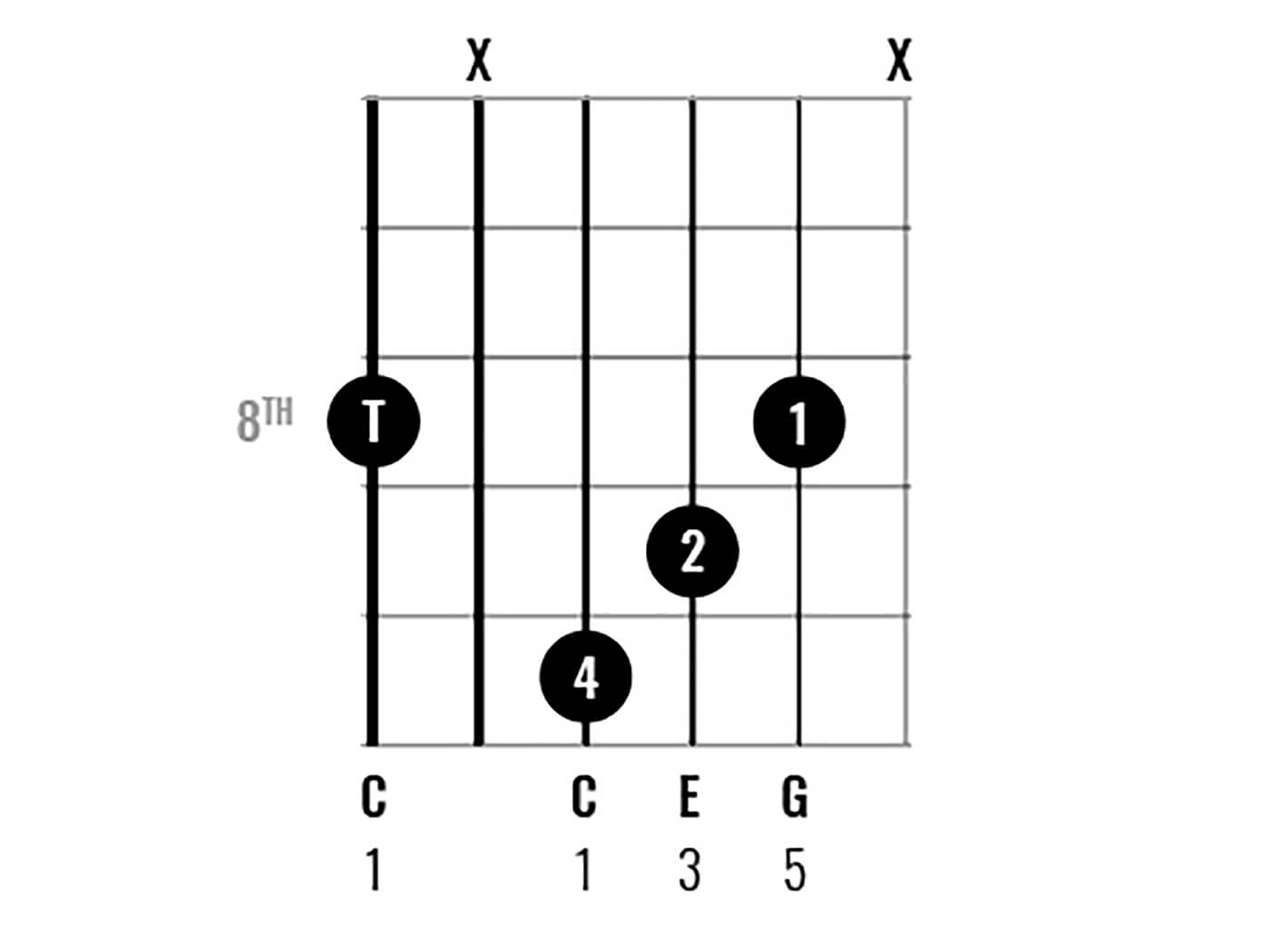 Sometimes, less really is more, and doing away with the notes on the top E string and A string from figure 8 makes this one sound more focused, powerful, less empty, and is easier to play providing you don’t have a problem with ‘thumb-over’ shapes. Barre chords are also inherently tiring for the left-hand – though you do have to mute the top E string with the underside of your first finger and the A string with the tip of your third finger. With practice, this becomes second nature. 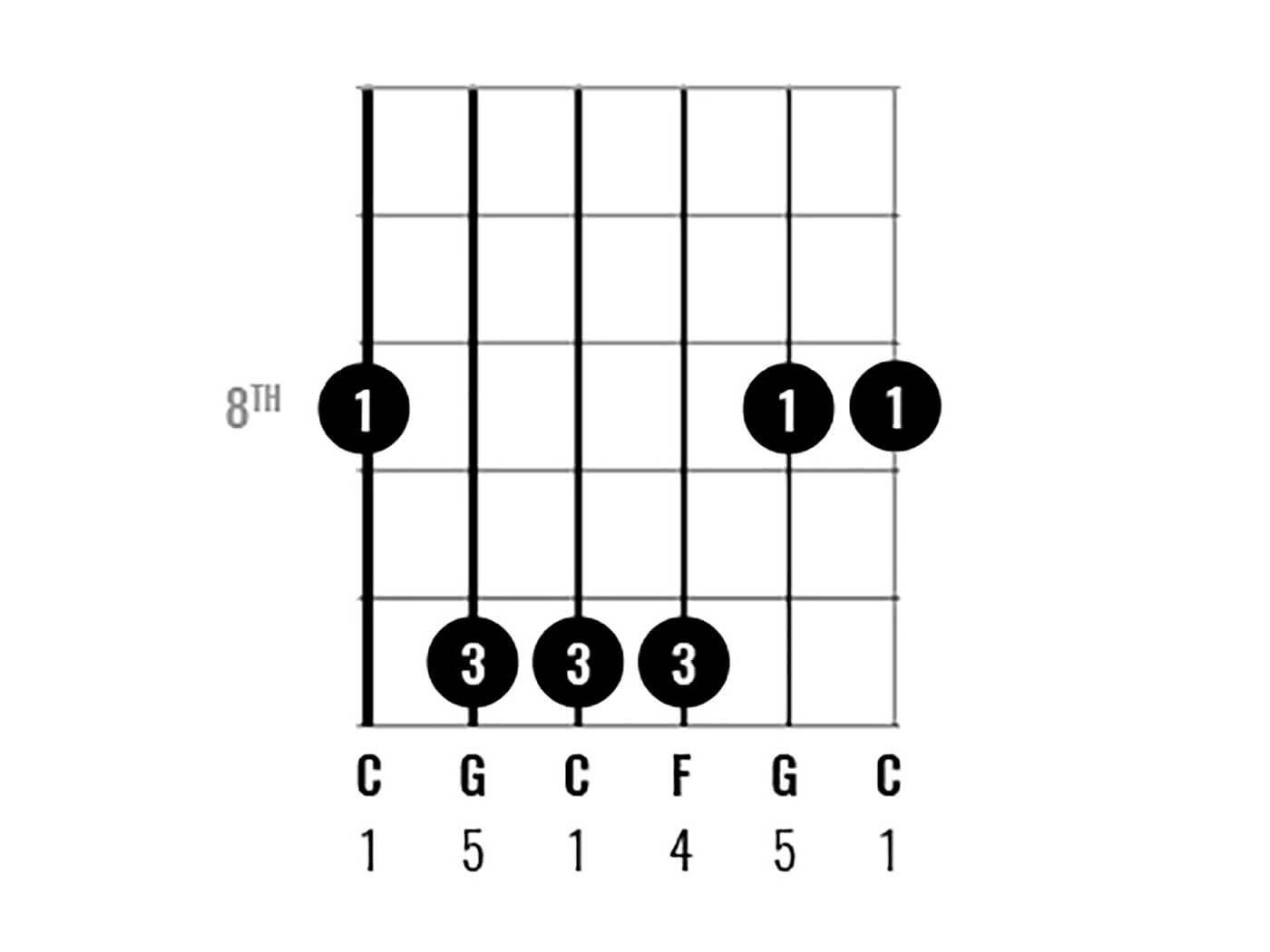 You get a Sus4 chord when you substitute the fourth note above the root for the third; in other words, F for E. Sus4 chords sound great when they are followed by the major chord, reinstating the missing third. Try alternating between figure 10 and figure 8 and also see if you can work out the Sus4 version of figure 9. Tip: just add your pinky on the G string.