This month we’re finding ways to give your chord sequences a boost by playing A major all over the guitar. 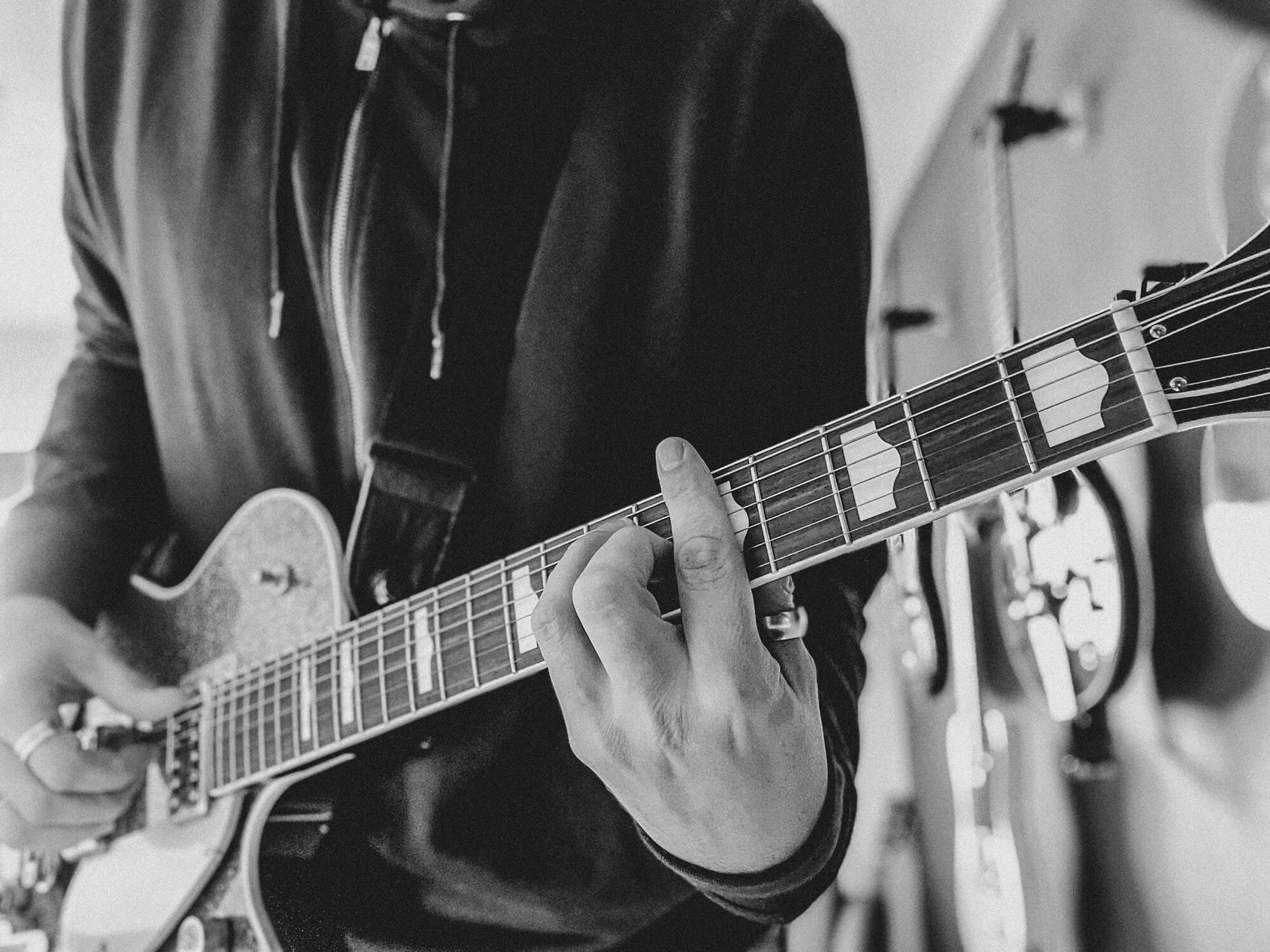 A major is one of the easier chords to play on guitar, although on some guitars with close string spacing, players with larger fingers can sometimes struggle to hold down the three notes cleanly. Don’t be afraid to squidge the fingers together tightly, and angle your hand so that the fingers are as close to the second fret as possible.

The notes of A major are A, C sharp, and E. There are many ways to play A major on the guitar, and the basic chord can easily be adapted to include the usual extensions such as sixth, seventh, ninths and so on. For this Chord Clinic, however, we are going to stay with the basic A major chord, working through as many voicings and inversions as we can.

Enjoy playing these chords and we’ll see you next month. 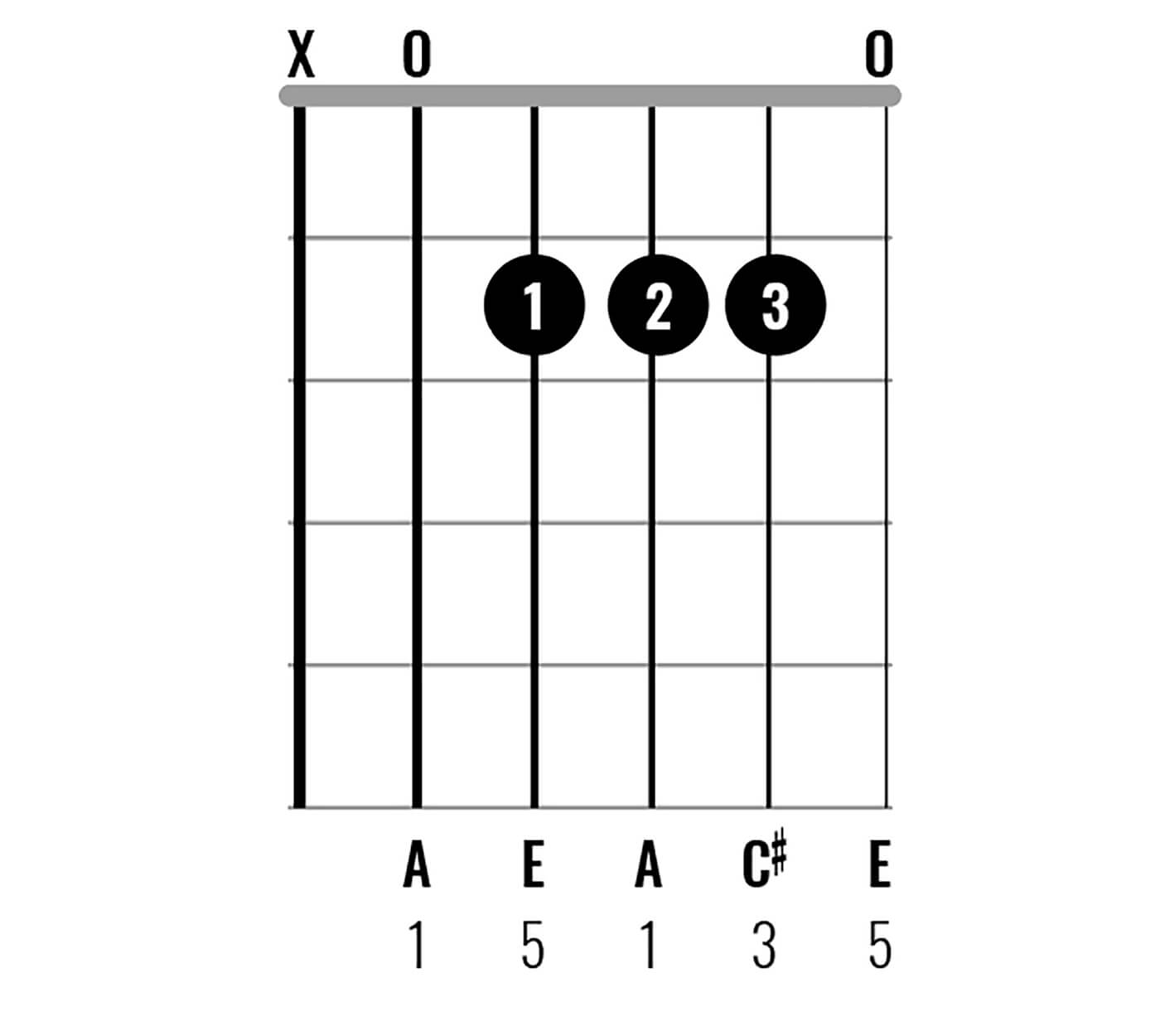 Ideal for everything from folk strumming to heavy rock this is the fundamental A chord that most of us learn early in our guitar playing career. You can also just play the middle four strings, or play the four highest strings, which will give you A/E, which means A with an E bass. 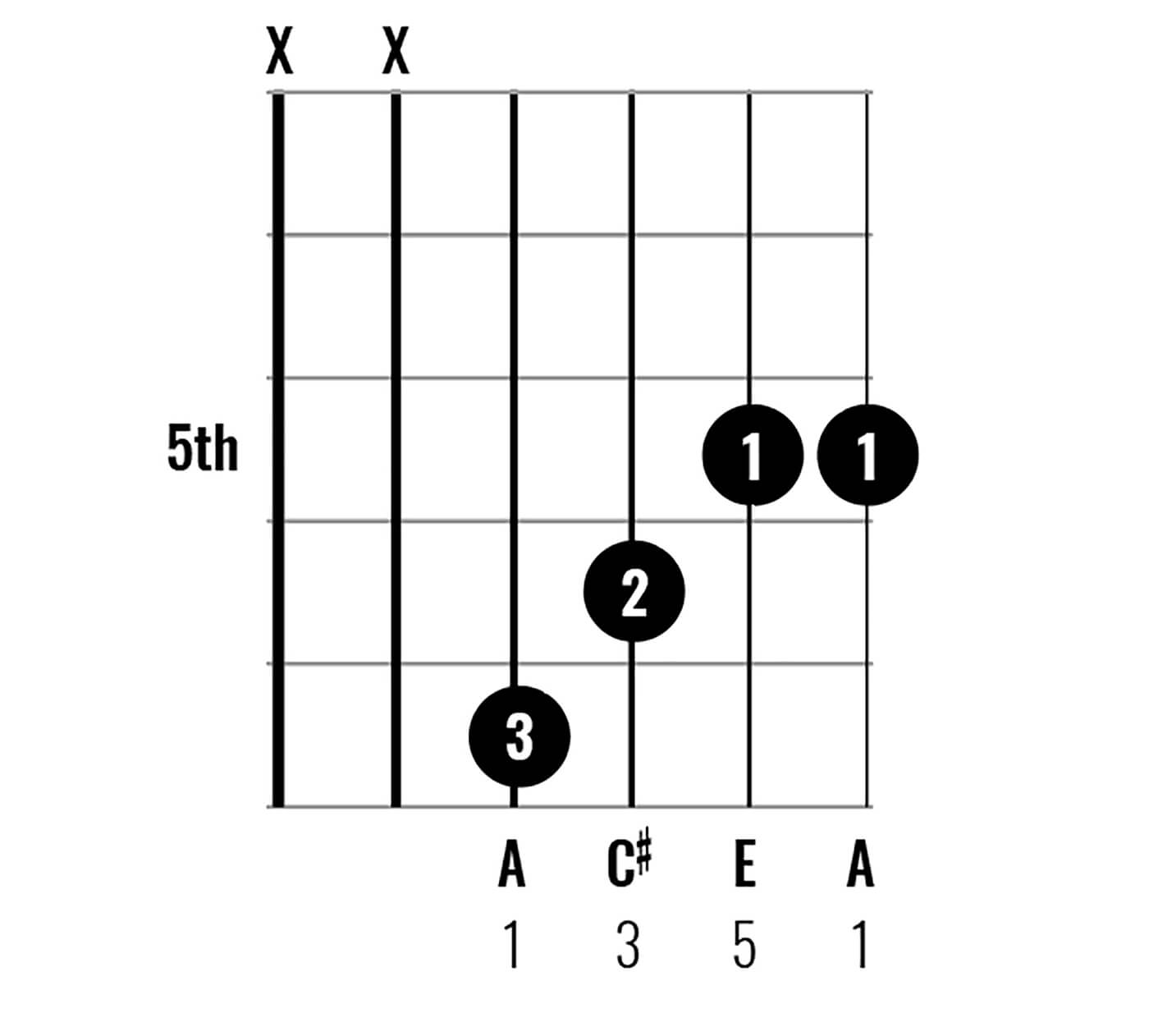 Chords sound strongest in root position and this movable shape is good for choppy rhythm parts or funk. The higher voicing gives it more sparkle, so Indie-style arpeggios work well too. You can always add the open A string for more weight and playing just the three highest strings is also an option. 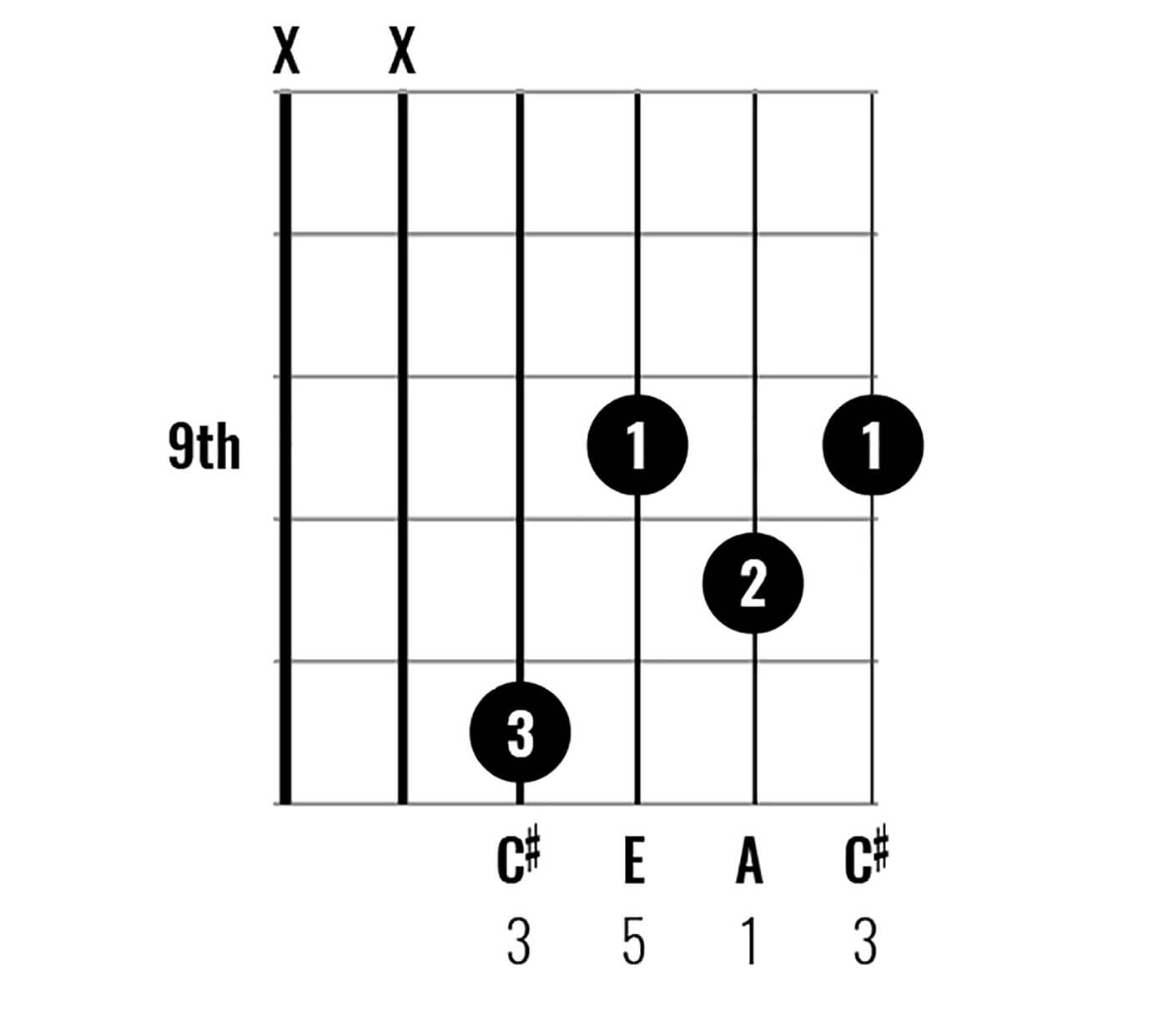 Moving higher up the guitar, this first inversion chord (because C♯, the third, is in the bass) adds even more sparkle. The top three strings or the inner three strings both give you an A major chord as well, and a world of fascinating arpeggios awaits as you switch between these two 3-note shapes with the optional open A string too. 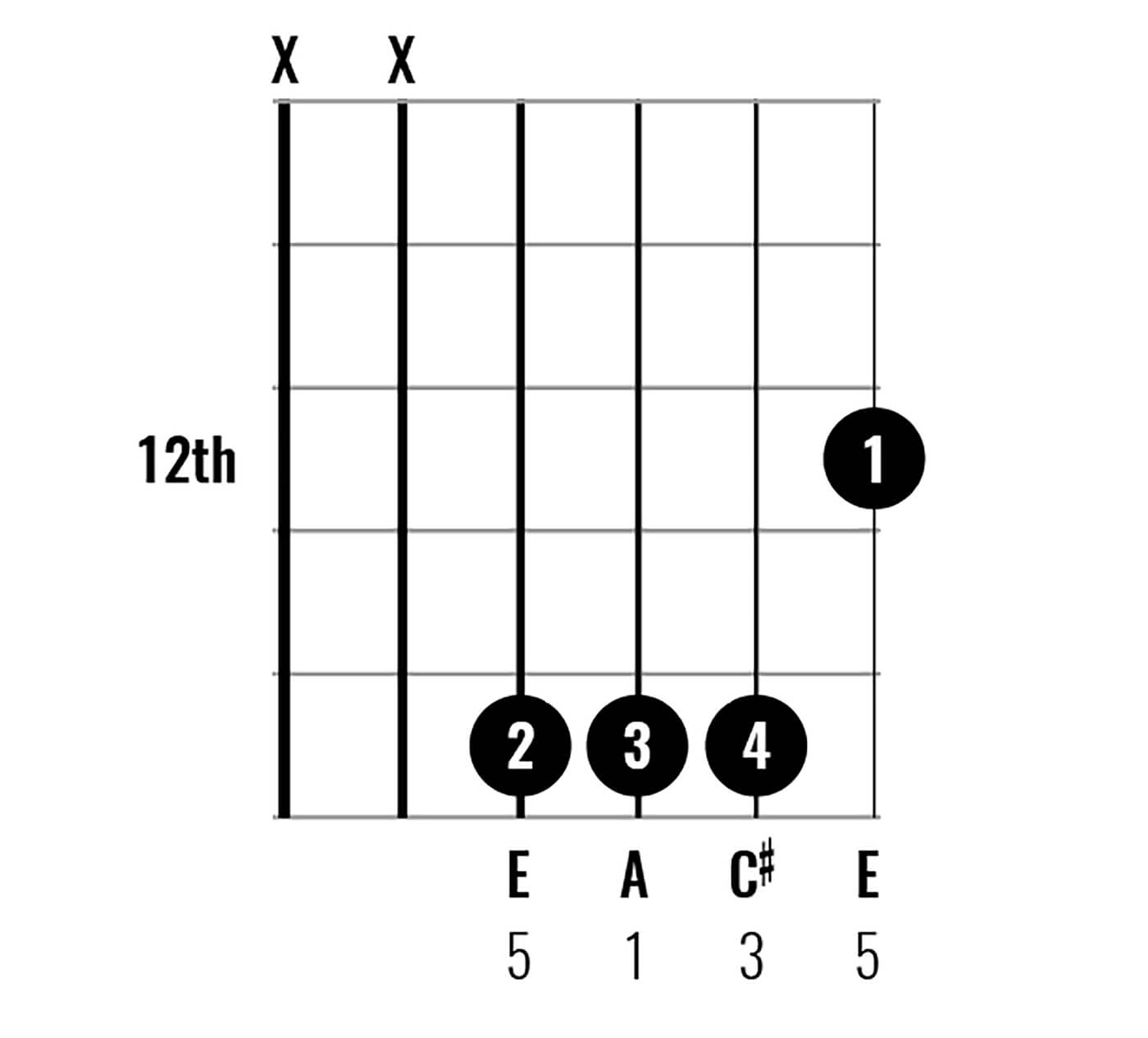 Completing the set of inversions, this second inversion shape is essentially figure 1 played as a four-string chord up above the 12th fret. Don’t forget you can also play figure 2 at the 17th fret, giving you the entire neck in four-string A major chords with root position, first, and second inversions. 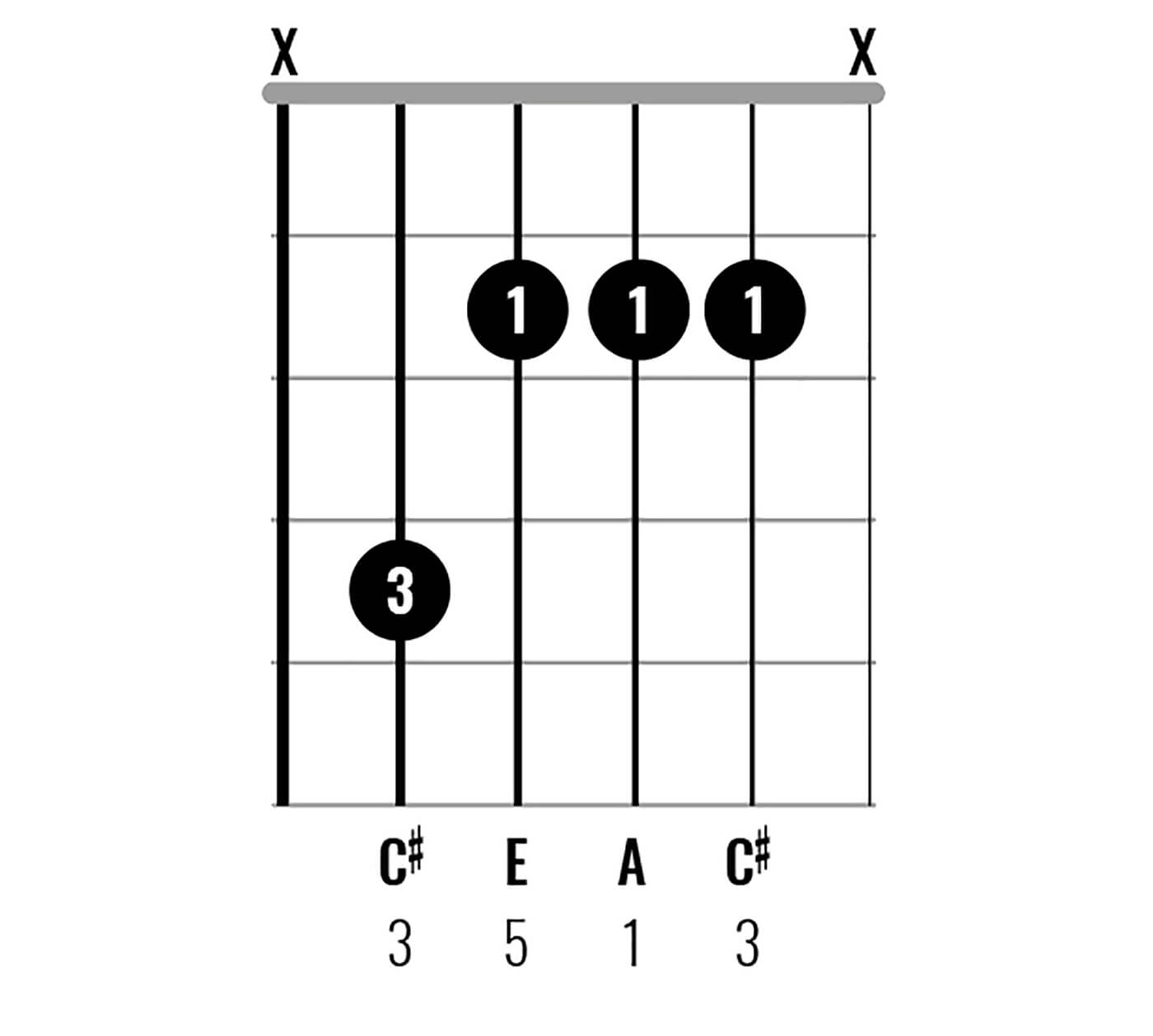 Here, we have gone back to figure 1 and added a C♯ bass note, creating a first inversion voicing an octave lower than figure 3. Adding bass notes to chords in this way can create some strong root movement – try playing figure 1, figure 5 and then a D major chord. 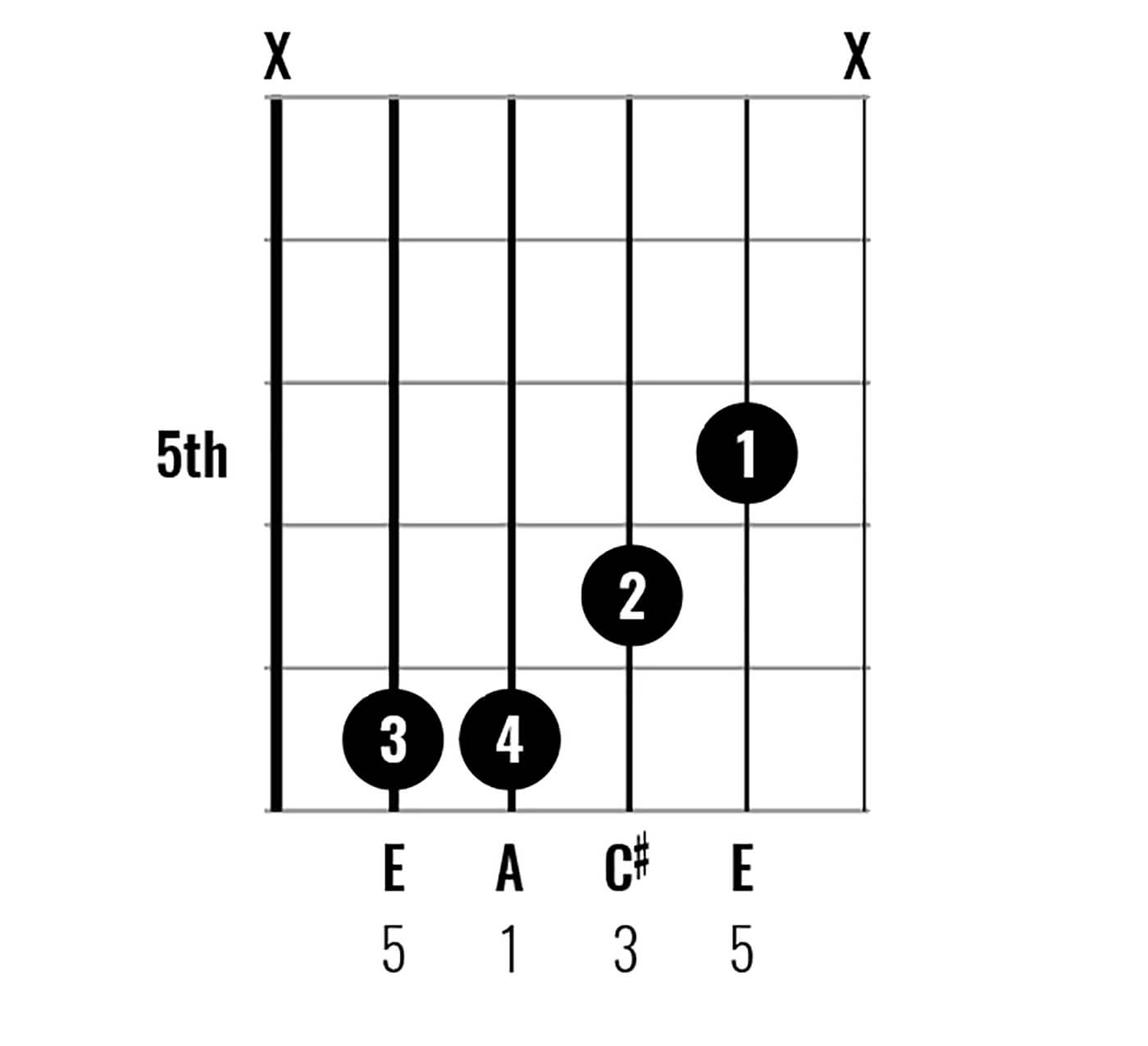 Staying with the middle four strings of the guitar, this second inversion chord can still do the choppy rhythm thing but with a beefier lower voicing. Mute the outer strings with the underside of finger one and the tip of your thumb. Try releasing the finger pressure momentarily for percussive strumming effects. 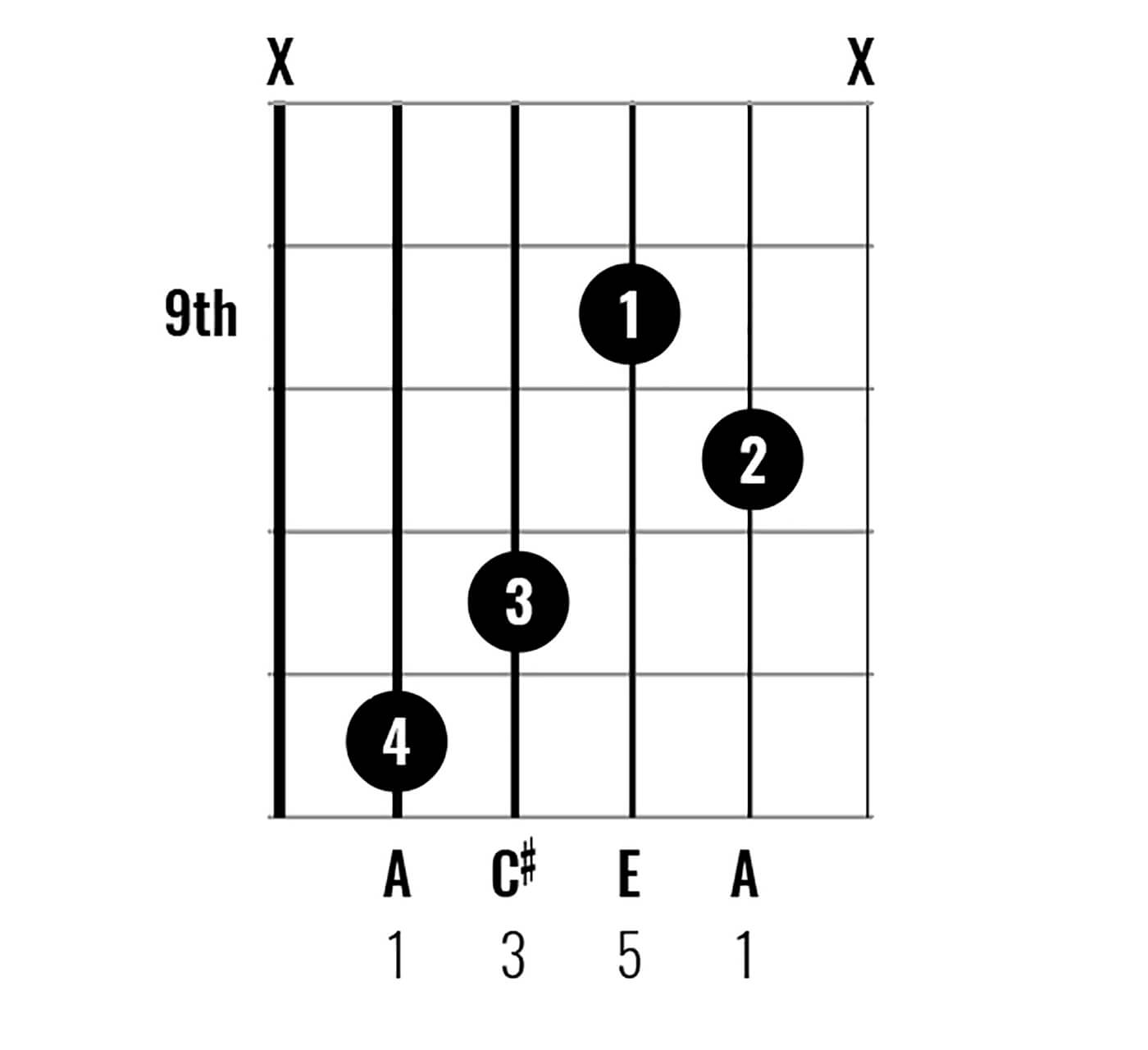 This root position chord may not be the most comfortable, but you can get used to most things, and its voicing on the wound strings rather than the plain strings of figure 2 give it a certain fatness. For rhythm parts we like these chunky four-note chords a whole lot. 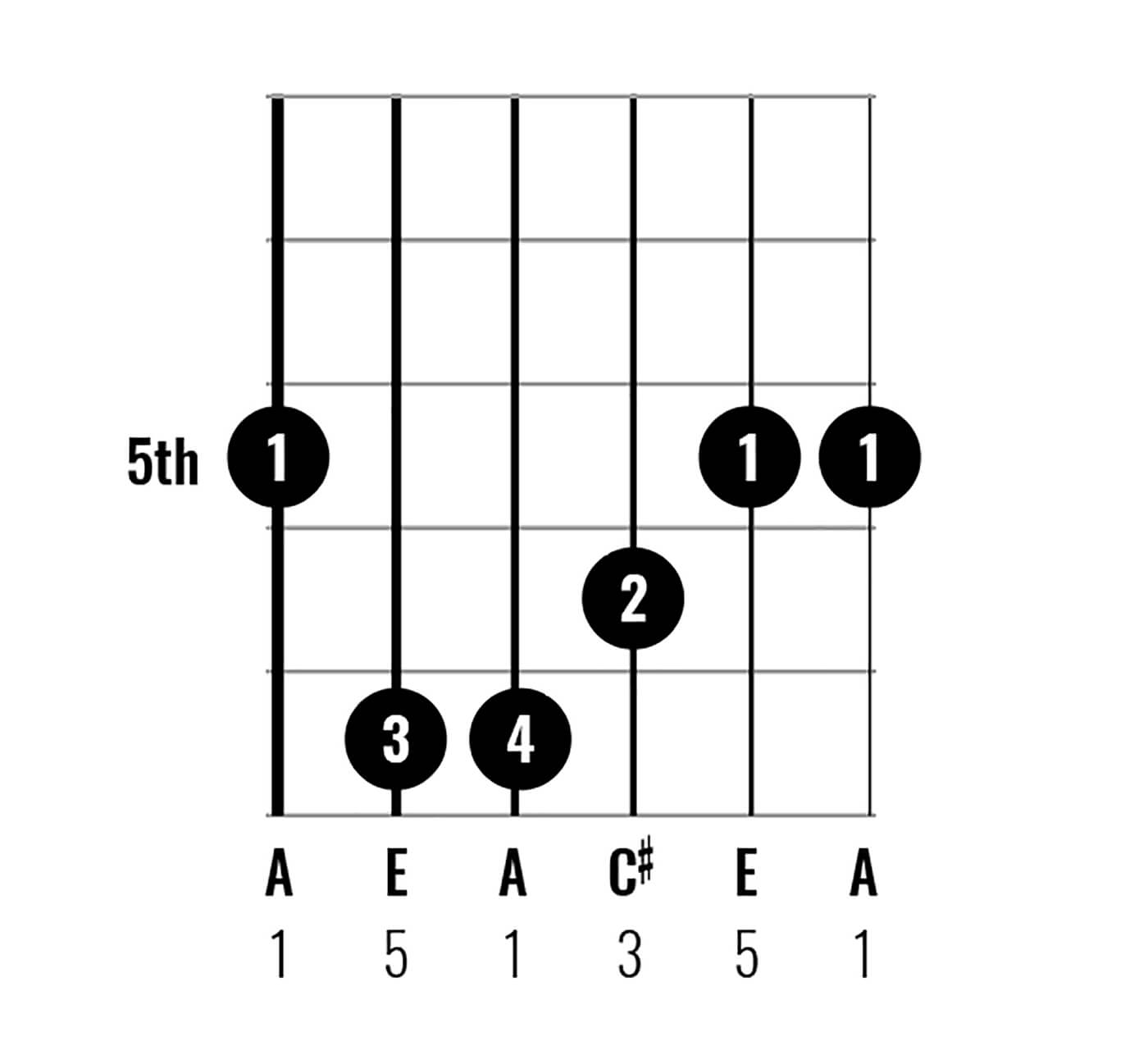 Pursued vigorously by beginner guitarists, the full barre chord is seen as something of a Valhalla. It sounds great in certain circumstances, but experienced players are more likely to play figure 9 unless you really must have the high A at the top. 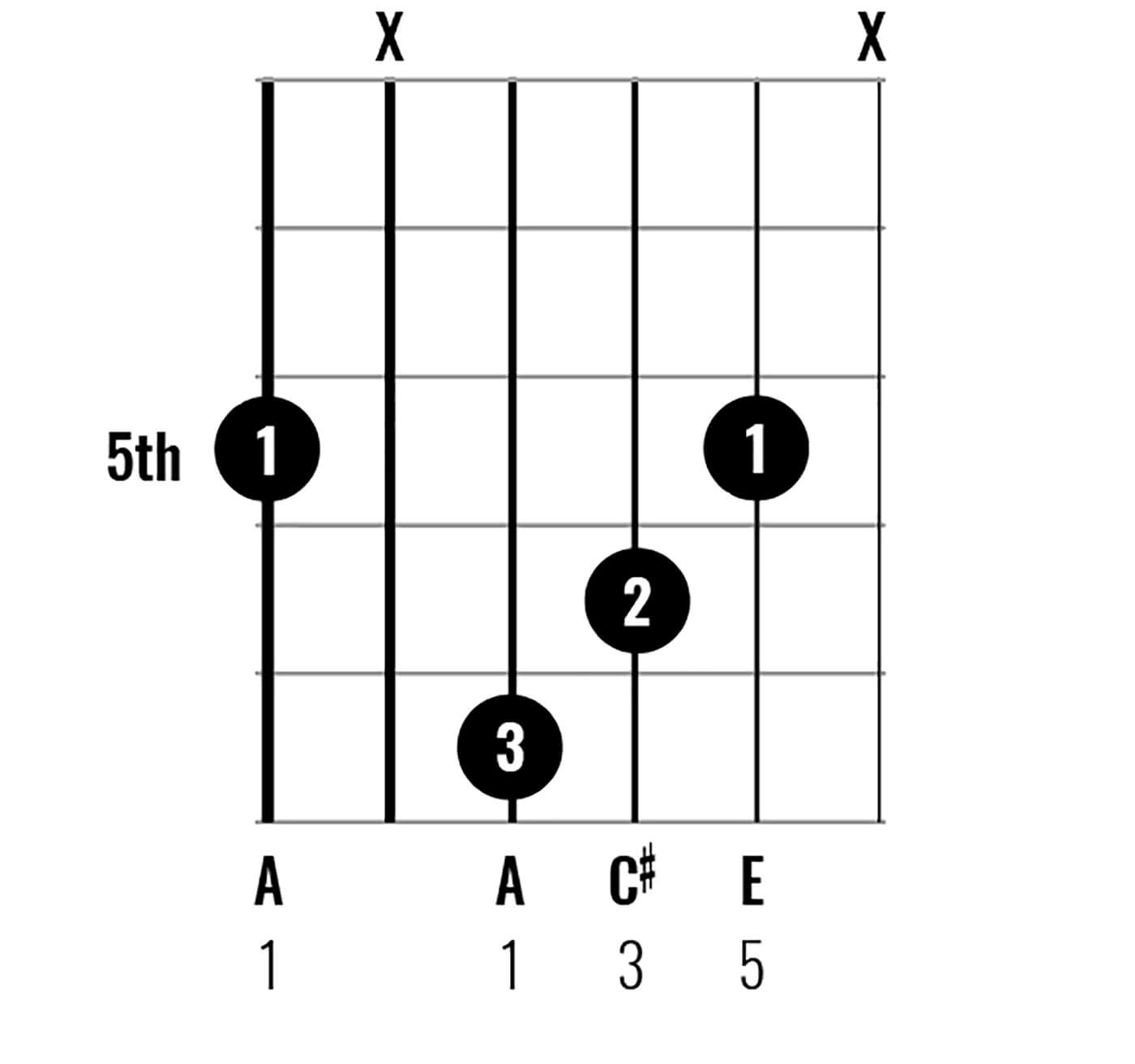 Removing the unnecessary doubled notes from figure 8 gives you a cleaner, tighter, and more easily movable chord. We would suggest, however, that if you are on a nylon string, getting your thumb over the edge of that wide neck is going to be tricky. So re-finger it, or play a barre chord, or switch to acoustic! 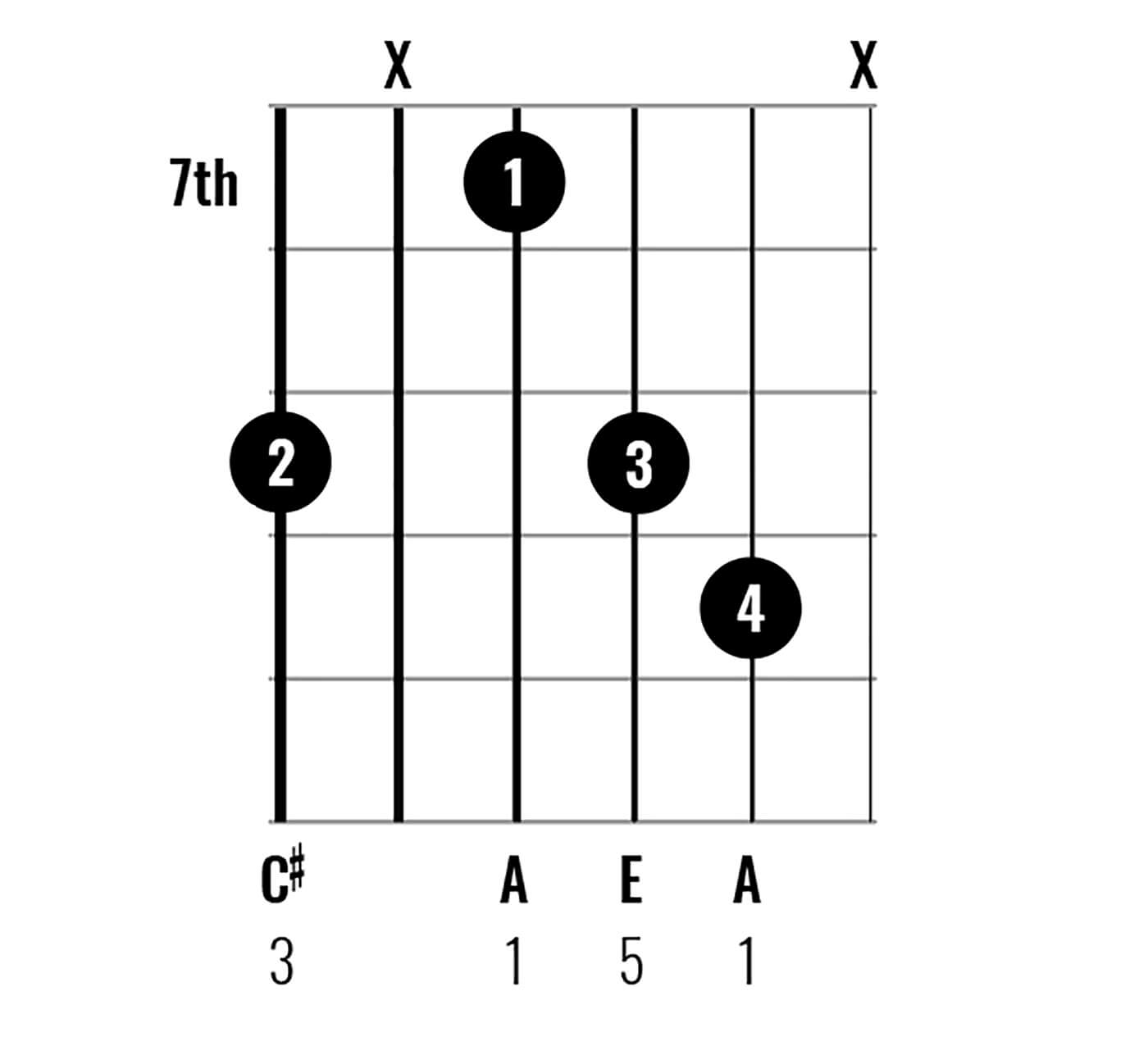 Here we have a first inversion chord which follows on from figure 9. Play D or D minor next, or anything else you would like to try. You could also go back to figure 1 and work your way through the chords substituting G♯ for A, to make an A major seven chord. Or add G for A7, F♯ for A6 and so on. Have fun and see what you come up with!