This month we take a look at the E major chord and find some variations that can spice up your chord sequences. 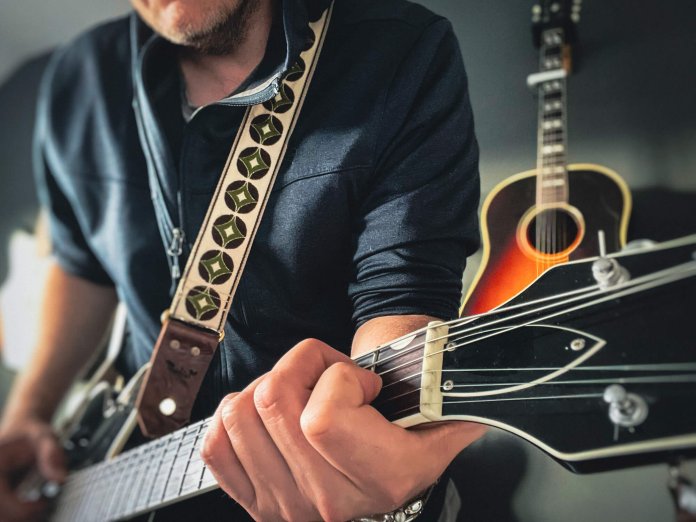 E is a great key for heavier, rock song writing, though the downside is that most of the chords in the key will require a barre. Only chord IV, A major, is available as an open string chord. This hasn’t stopped artists as diverse as Fleetwood Mac (Don’t Stop) or Pixies (Where Is My Mind) from writing in this key.

The notes of E major are E, G sharp and B. There are many ways to play E on the guitar, and the basic chord can be adapted easily to include sevenths, sixths, added nine and sus4 variations. Have fun working on these chords – we’ll see you next month. 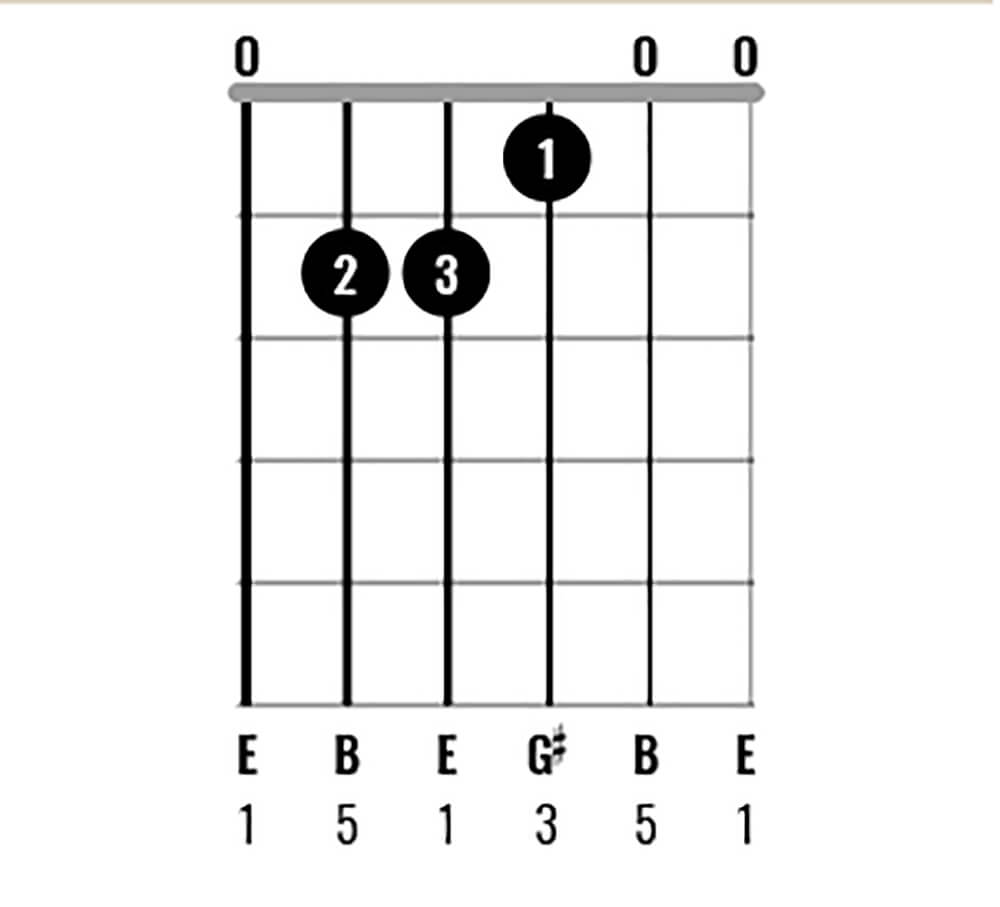 Play the basic chord and hammer-on with finger one – it’s a commonly used blues trick. Then hammer-on with any of the other fingers too, or even all three at once. Also try using your thumb to play the low E in a steady beat and your fingers to play the top three strings in a cross rhythm. 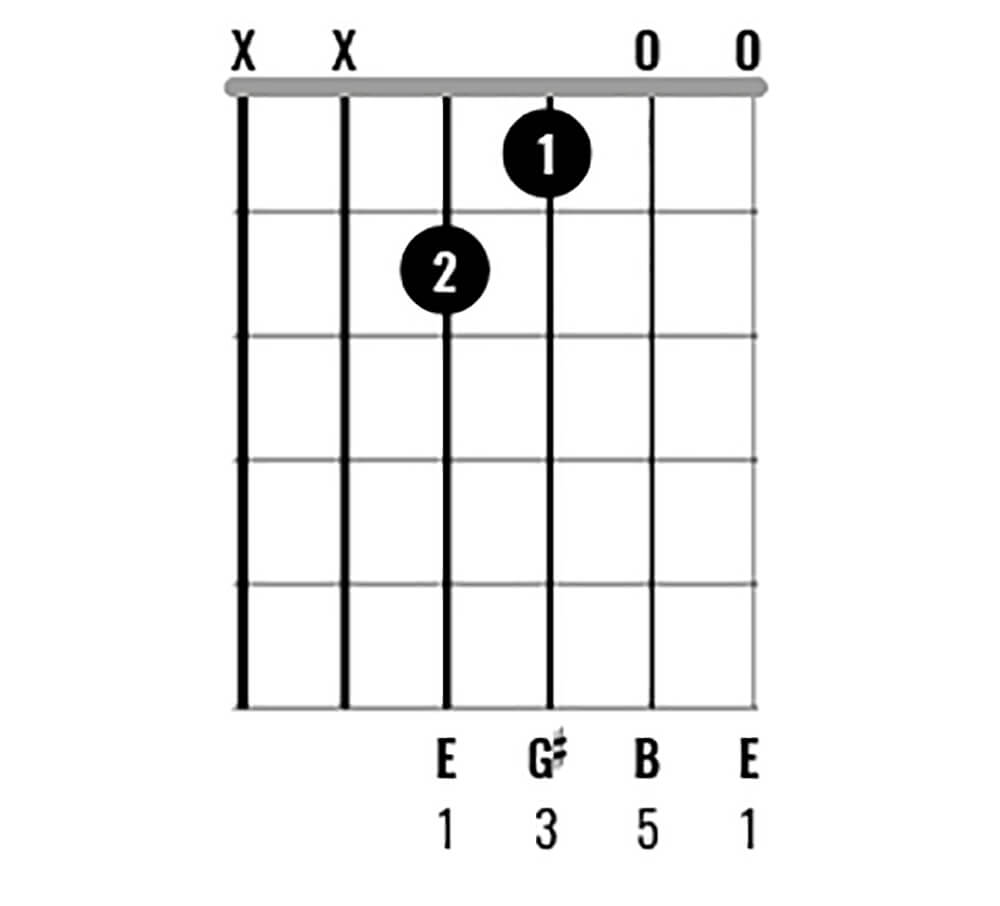 E is a cool key, but you might not always want that heavy open E string. Four-string chords are lighter in texture, easier to play, and can be moved around more quickly. We like them a lot. This one is in root position. 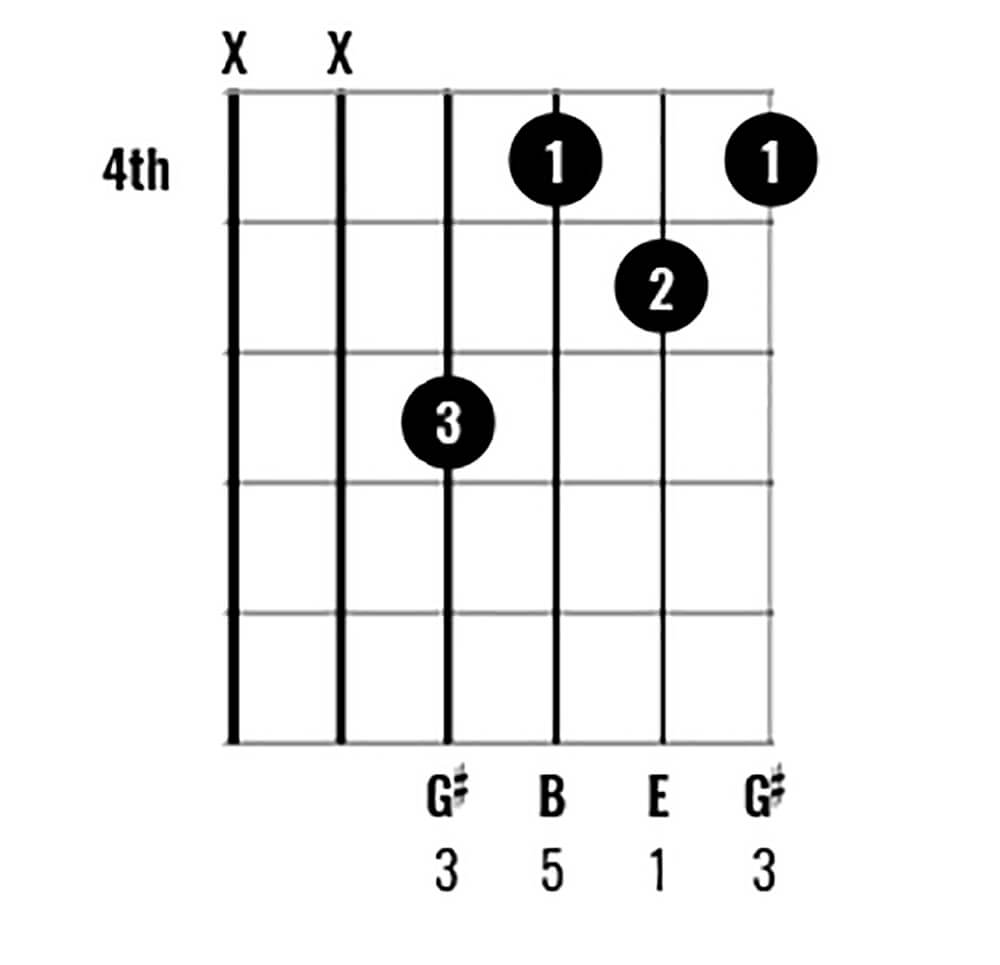 Staying with four-string chords, we’ve moved up the neck to the fourth fret to make an E major chord with G sharp in the bass. We would call this a first inversion, because the third of the chord is in the bass. 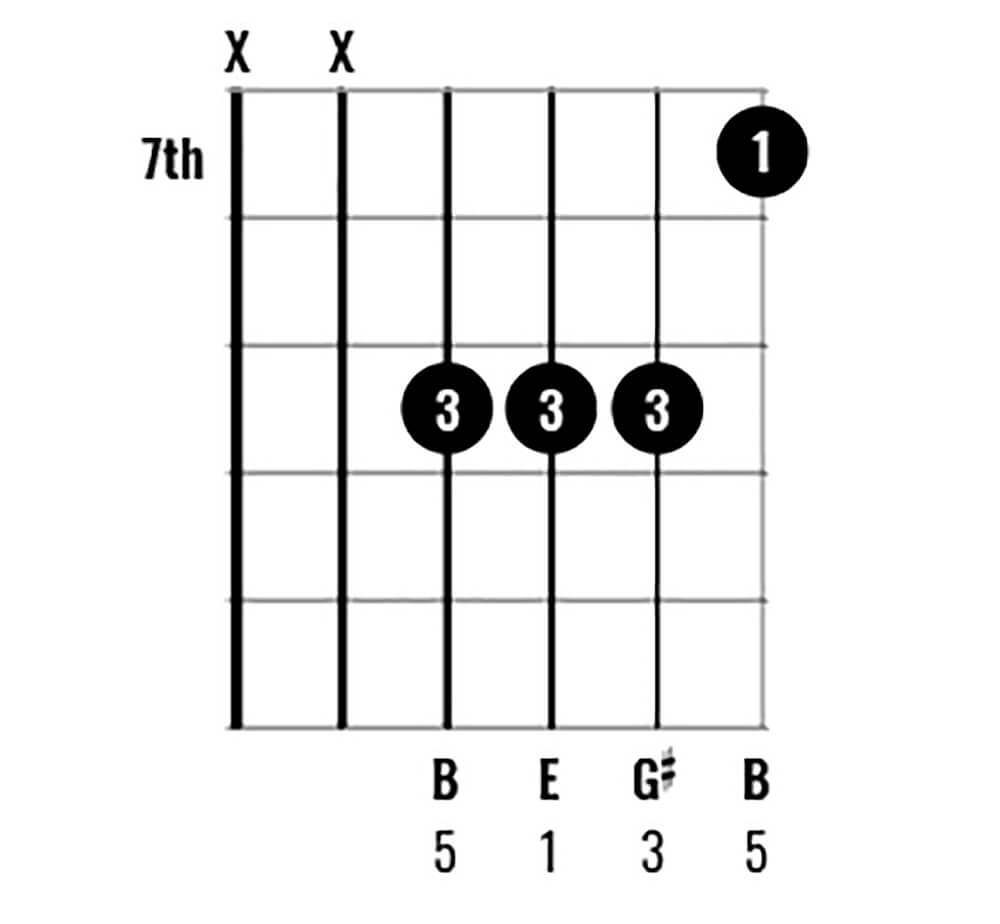 Up at the seventh fret we get E with B in the bass, which is a second inversion, because the fifth of the chord is in the bass. If you are ever stuck playing an E chord for a long time, try moving between these different inversions to create a more interesting guitar part. 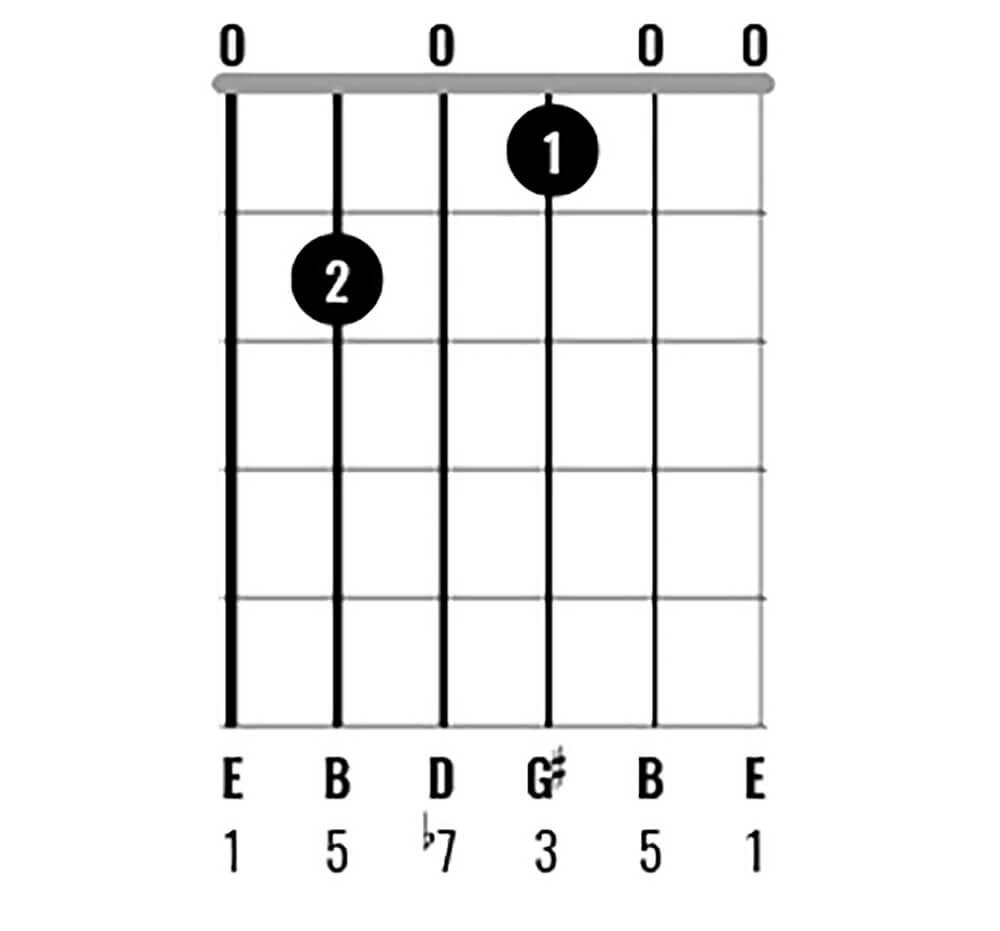 Returning to the basic shape, if you release finger three you introduce the open D string into the chord, creating an E7 chord. This is a “dominant” chord, chord V7 in either A or A minor. Try switching back and forth between these chords to hear the effect of chord V resolving to chord I. 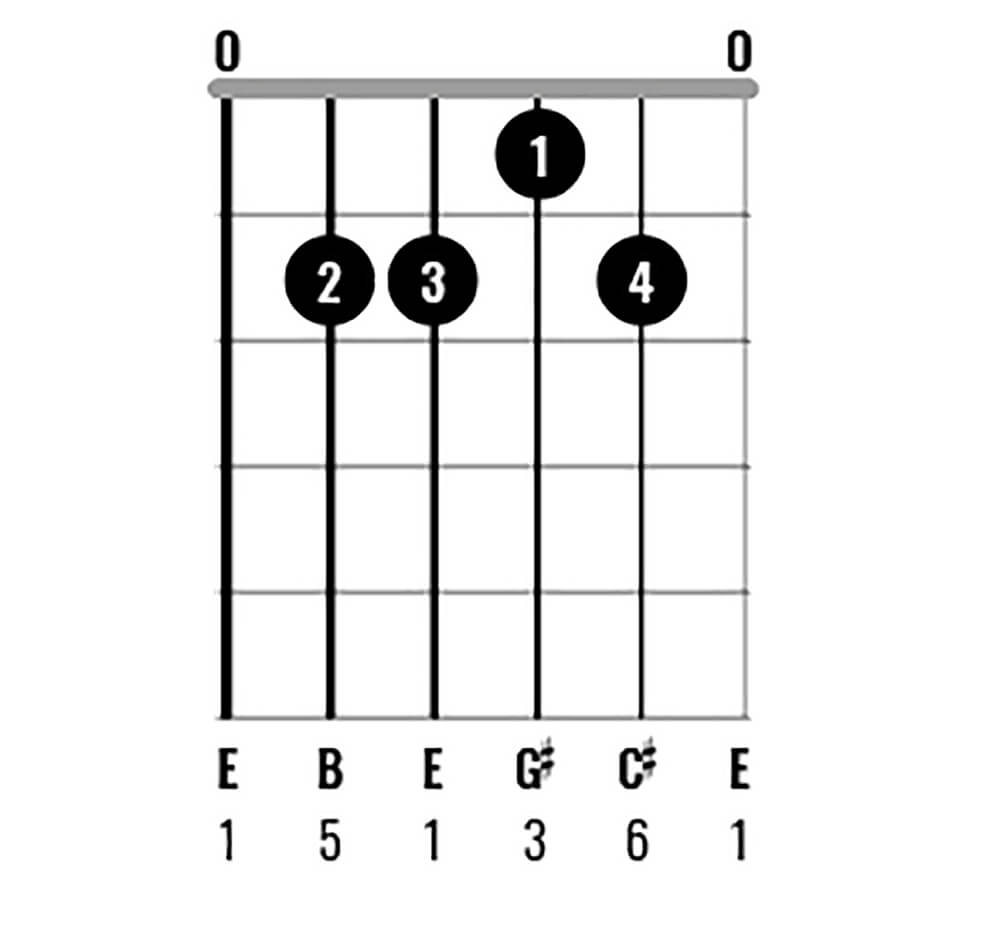 The sixth, C sharp, doesn’t fit so well under the fingers in the low octave, so we’ve moved it up an octave to the B string. Try strumming while you add and release finger 4 so you alternate between E and E6. Can you play E with the low C♯ instead? It’ll be on the A string. 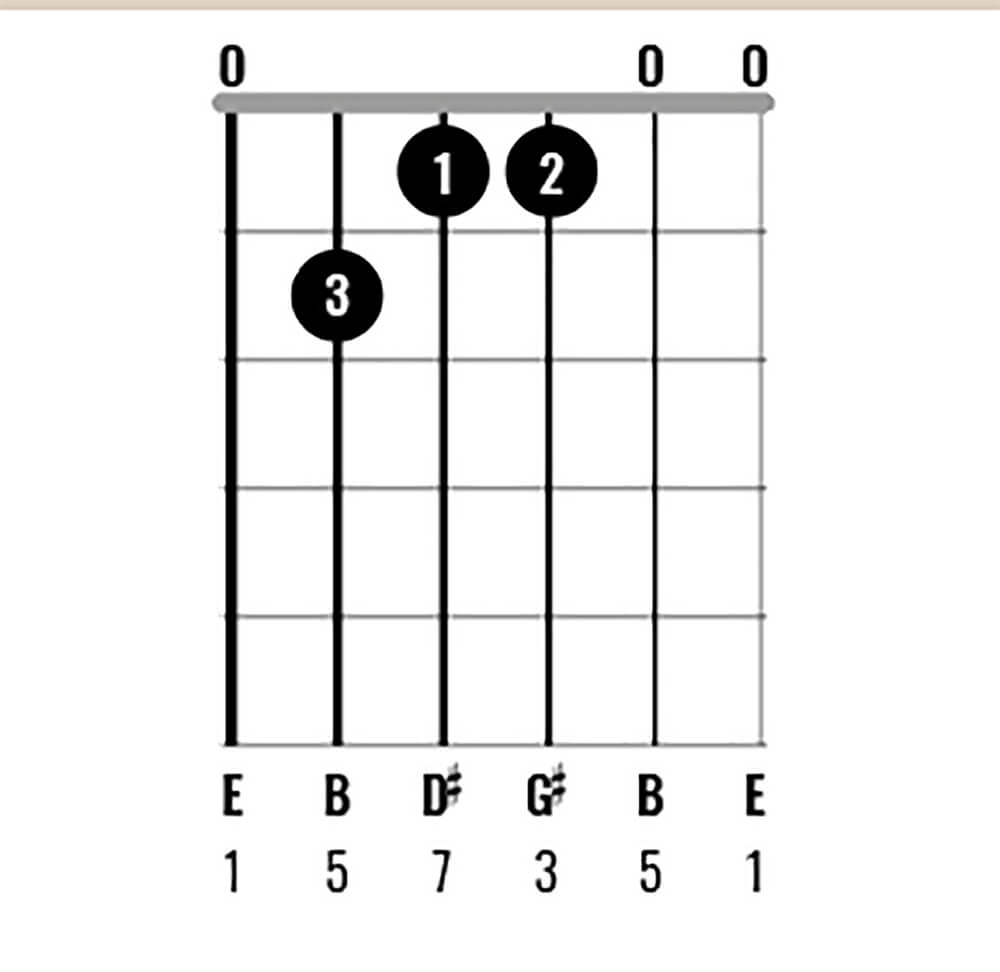 We like the sound of interesting notes added to a chord in the lower octave, as they seem more mellow. Here, we’ve added D sharp, making an E major seven chord. Try E followed by Emaj7 and E7 and then moving on to A Major. Or another chord – see what works! 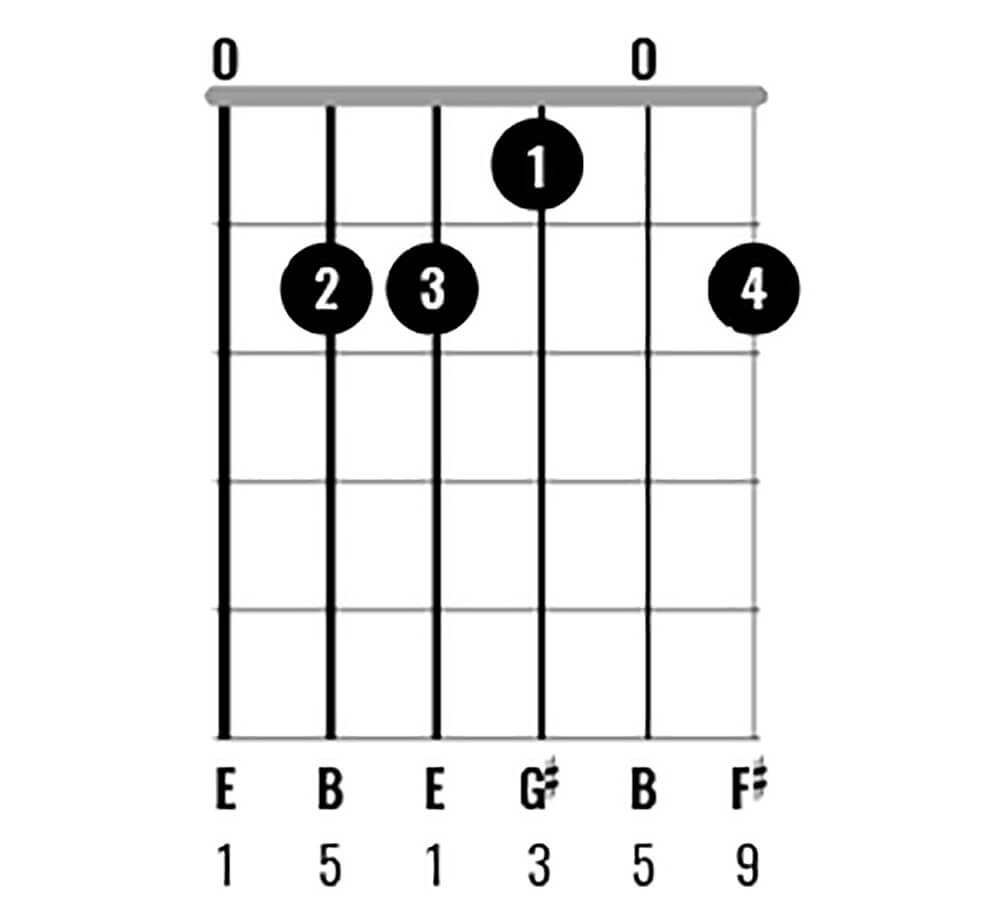 Added ninths sound great alternating with the plain major chord, giving you another way of creating interest with a strummed E major. Eadd9 just adds the note F sharp, but E9 would include the seventh as well. Try it, using E7 as the starting point. 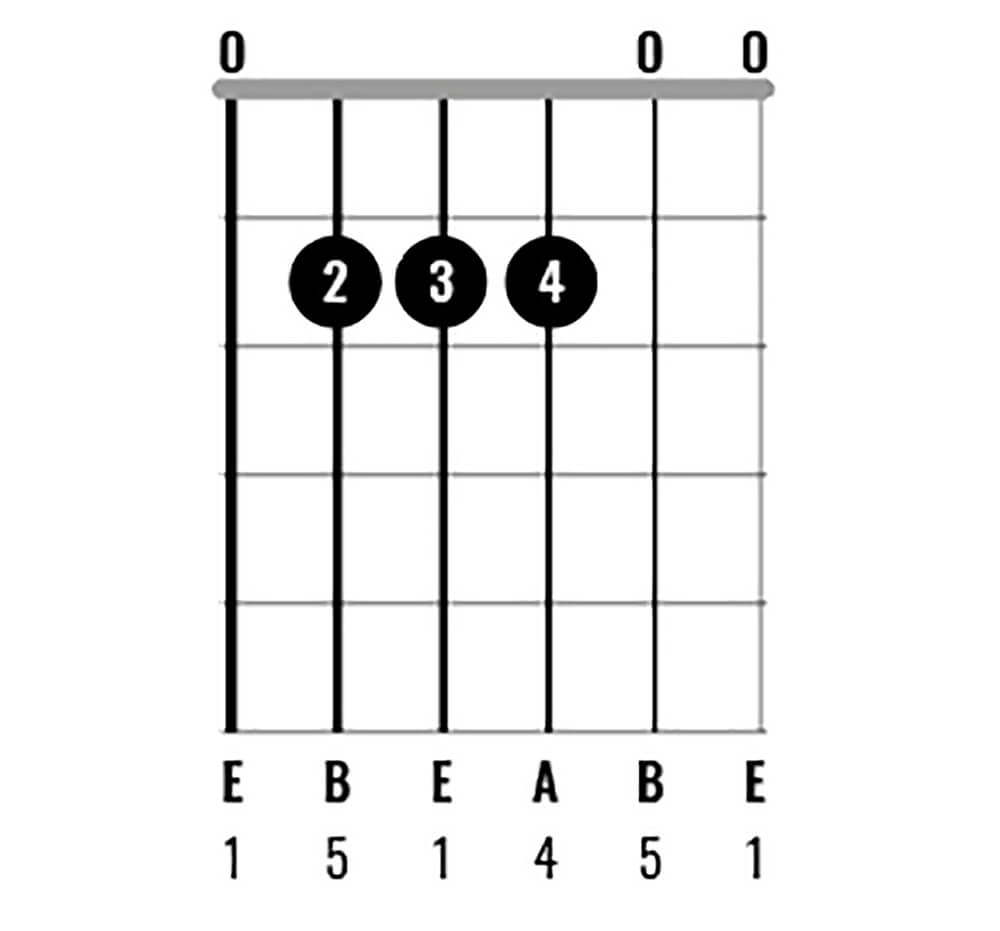 Sus chords (short for suspended) replace the third of the chord with either the fourth or the second, so here we have the note A (the fourth) added to make Esus4. This also works well alternating with the E chord. Esus2 is a tricky one and doesn’t fit under the fingers so easily. 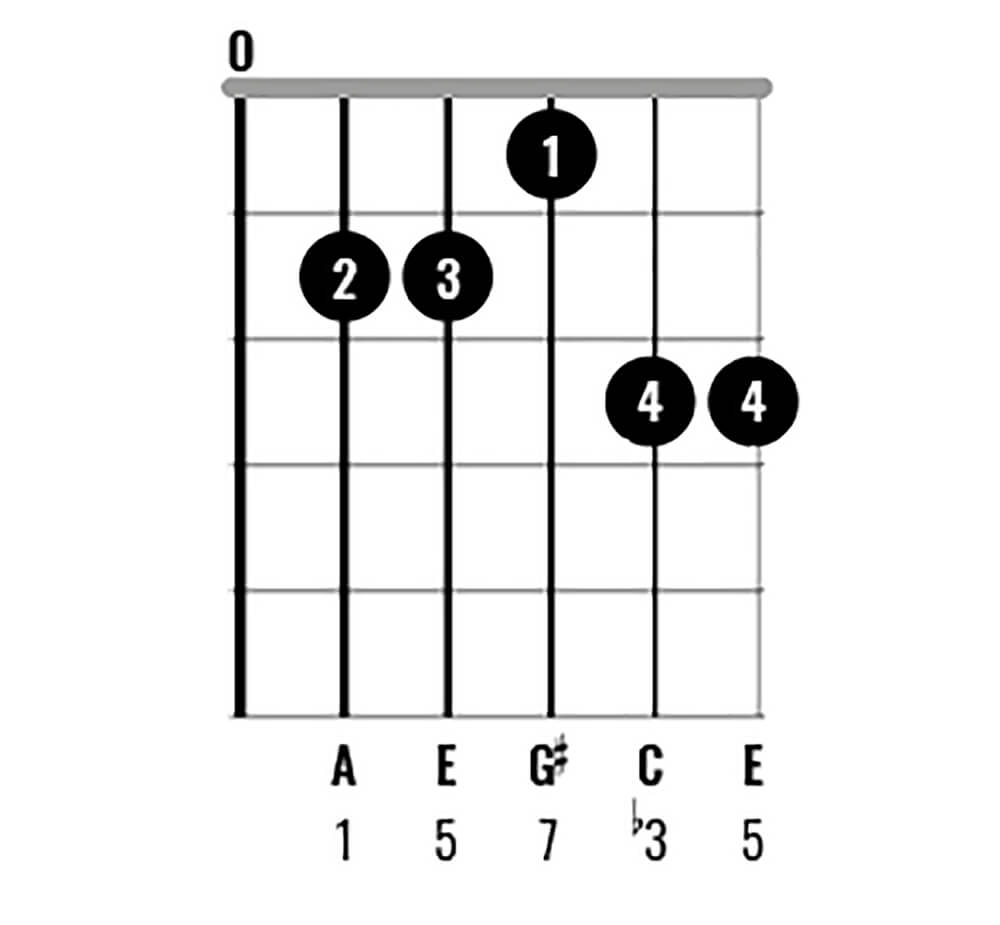 Here we’ve added the seventh (D) in the upper octave together with the sharp nine which could be called F double-sharp, but we’ve called it G. It’s a chord which has both the major and minor third, and it’s a powerful beast when you add some crunch. It’s not easy, because you have to stop two strings with your fourth finger, but it’s worth it. Rock on!