In this month we take on the challenging F major barre chord and come up with some useful alternatives and inversions. 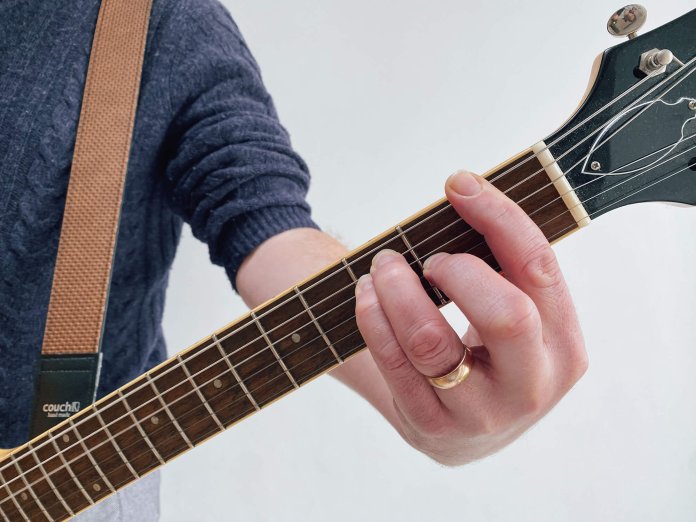 The basic F major barre chord is often the first barre chord that beginners come up against, as F is chord IV in the popular key of C major. It’s a challenge to play not only because it’s a barre chord, but also because of its position at the first fret, precisely where the nut is holding up the strings that the hapless guitarist is trying to hold down.

One way of avoiding F is to use a capo – you could capo the third fret and play a D major chord, or the fifth fret and play a C major shape. You could also capo the first fret and play E, but in each case all the other chords in the song will need to be adjusted to the new key.

The notes of F major are F, A and C, that’s root, third and fifth of an F major scale. As you play these examples see if you can find the major seventh (E) or minor seventh (E♭) to add to the chords, giving you an F major seven or F seven. Or just experiment with added notes and open strings and see what you find. Have fun and we’ll see you next month. 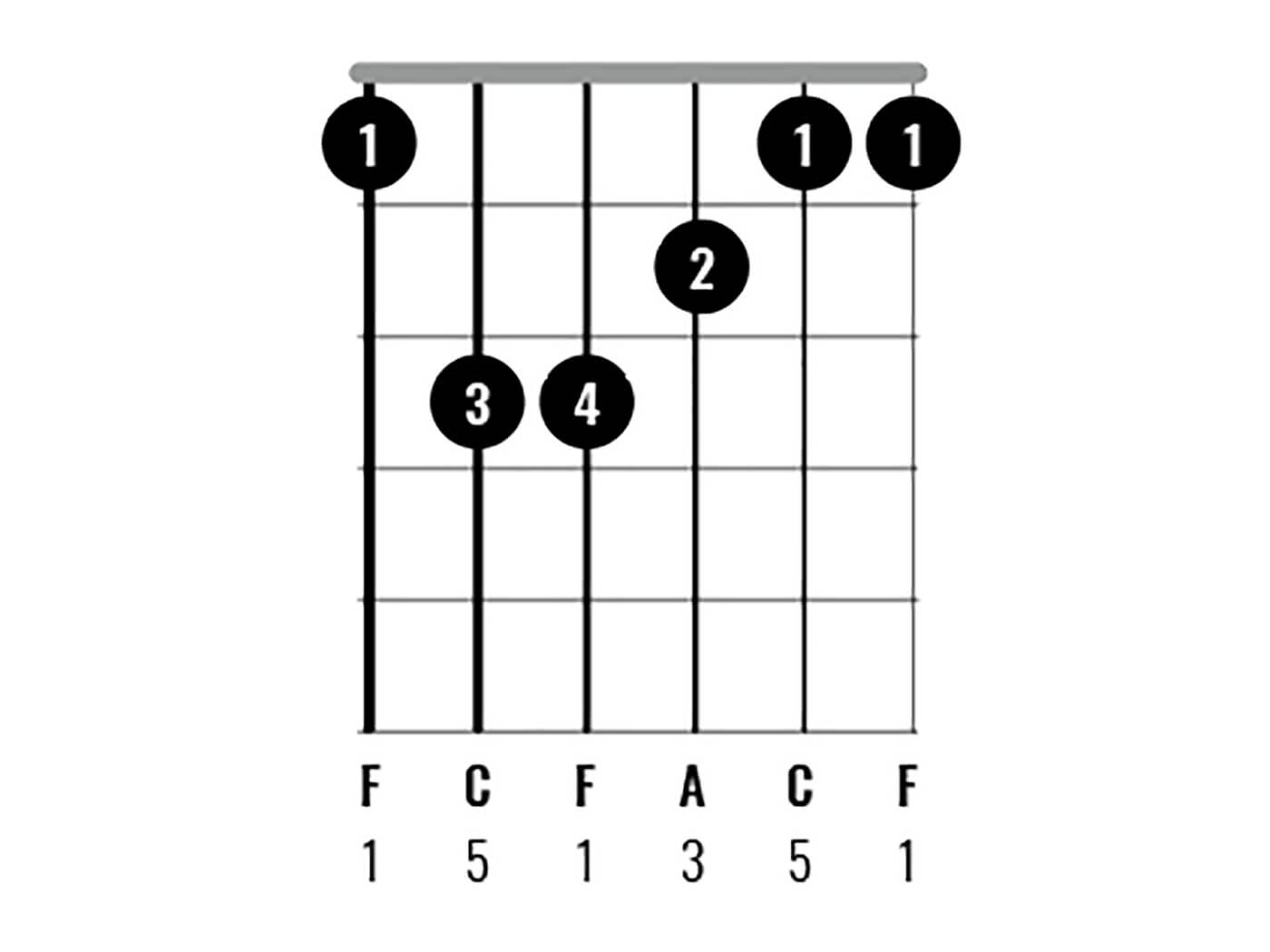 This is the big one, the F barre chord down where the nut is fighting against you. We suggest practising this chord shape at the fifth fret, (where it will make an A major chord) and working your way down the guitar fret by fret until you master it at the first fret. Be patient and try to get each note to sound cleanly. 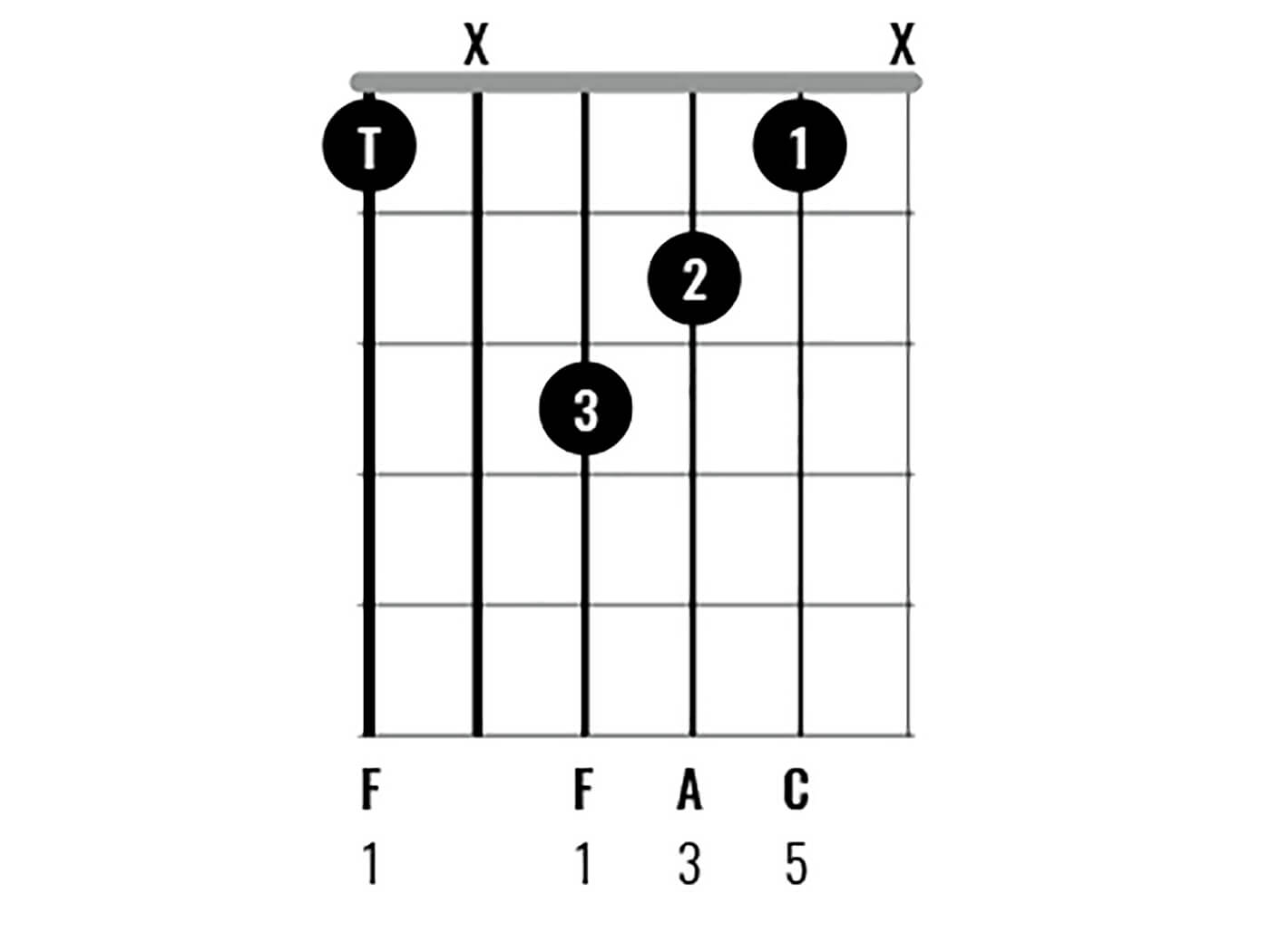 Here we have the “thumb over” version of F, which we like a lot. Not only is it more compact and better sounding, but it avoids the barre altogether. On the downside, you have to mute the top E and the A string, and have hands big enough to reach the first fret on the low E with your thumb. 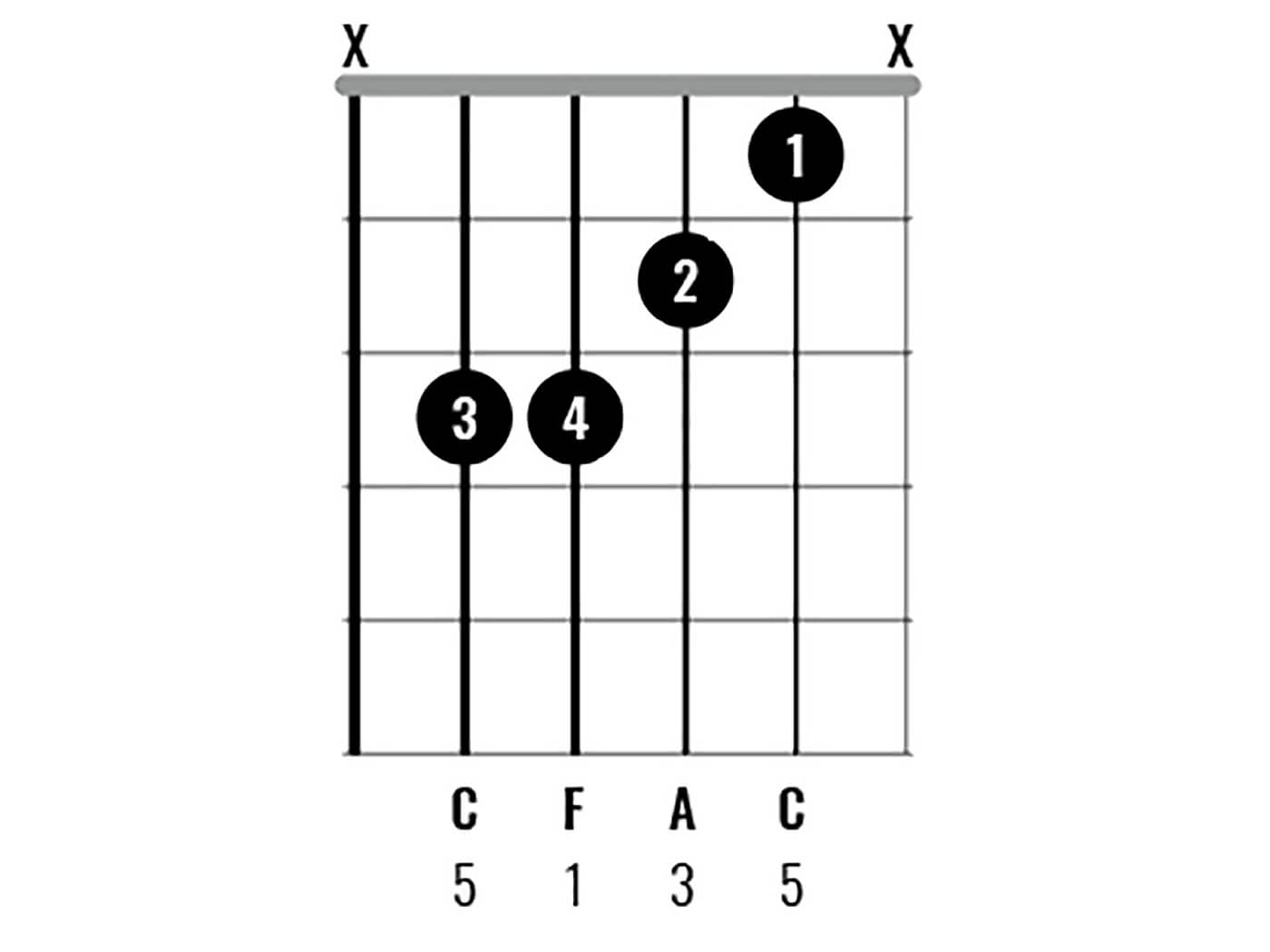 Technically a “slash chord”, F with C bass, this version of F major is not so hard to hold down. You’ll need to mute both E strings, with first finger and third finger respectively. This chord sounds particularly good if you are alternating between C major and F major chords. 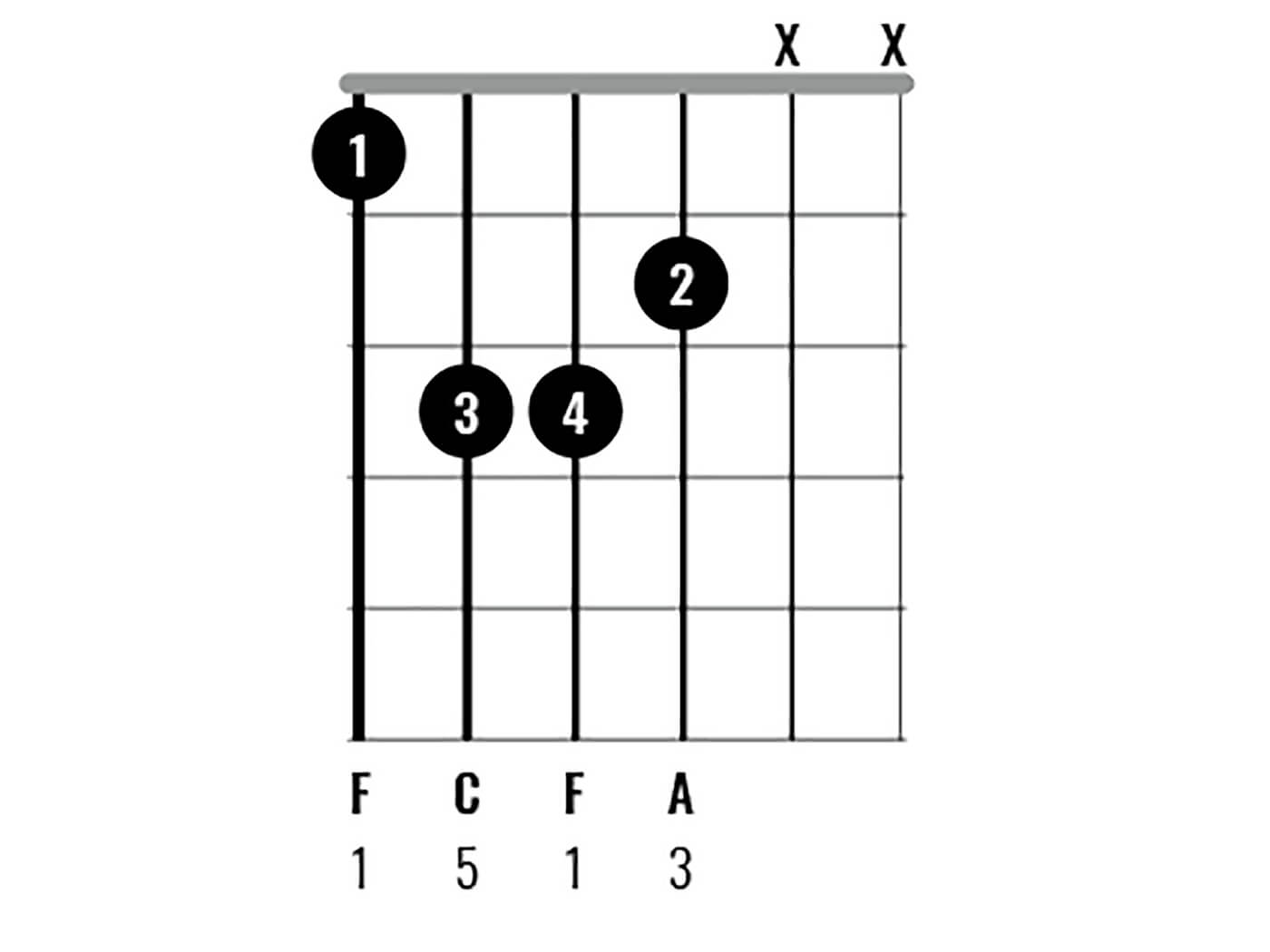 Also not hard to hold down, this low voicing of F mutes the top E and B strings with the underside of the first finger, and sounds thick and chunky. If you release finger two and mute the G string as well, you’ll have an F5 chord, containing just roots and fifth. Ideal for that metal opus you were planning. 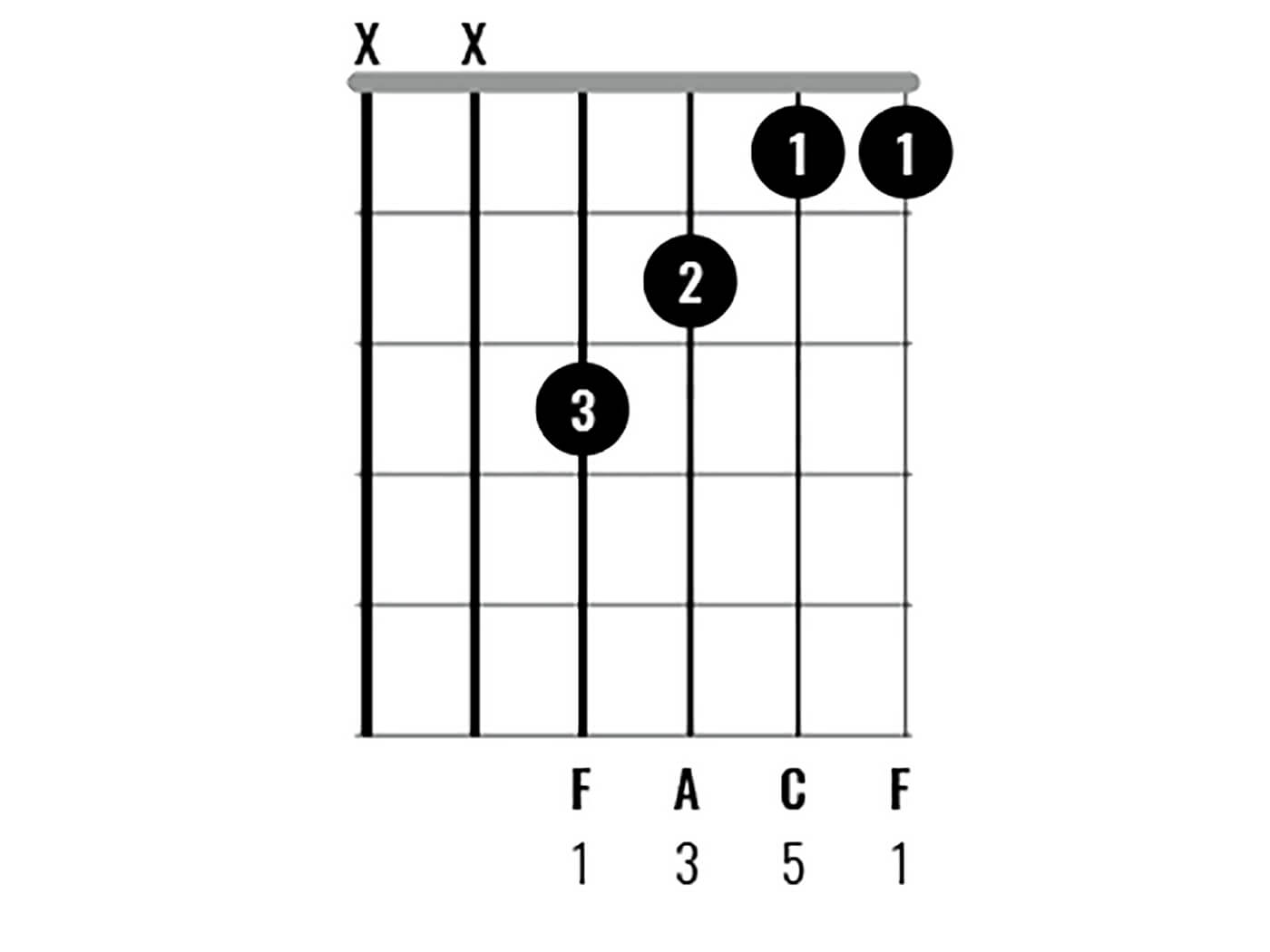 Here, we’ve gone for a higher voicing of F major, easier than Figure 1 because you are only barring two strings with the first finger. Mute the A string with the tip of finger three and you can strum freely. Just don’t hit the low E. Try this chord up at the thirteenth fret too. 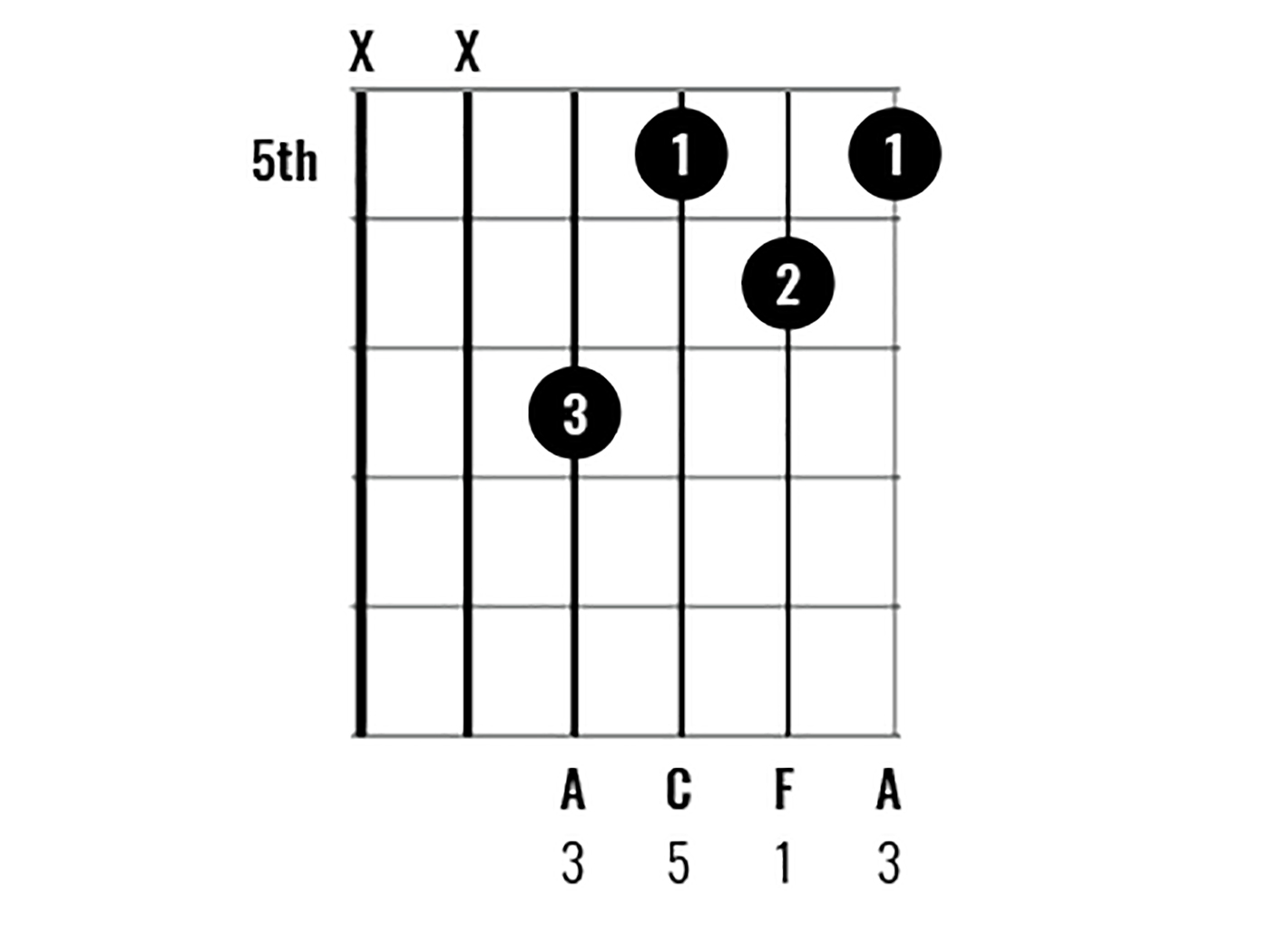 At the sixth fret you can find F major in first inversion, which means the third of the chord, A, is the bass note. First inversion chords sound less focused and solid than root position chords. Compare this one to figure 5. 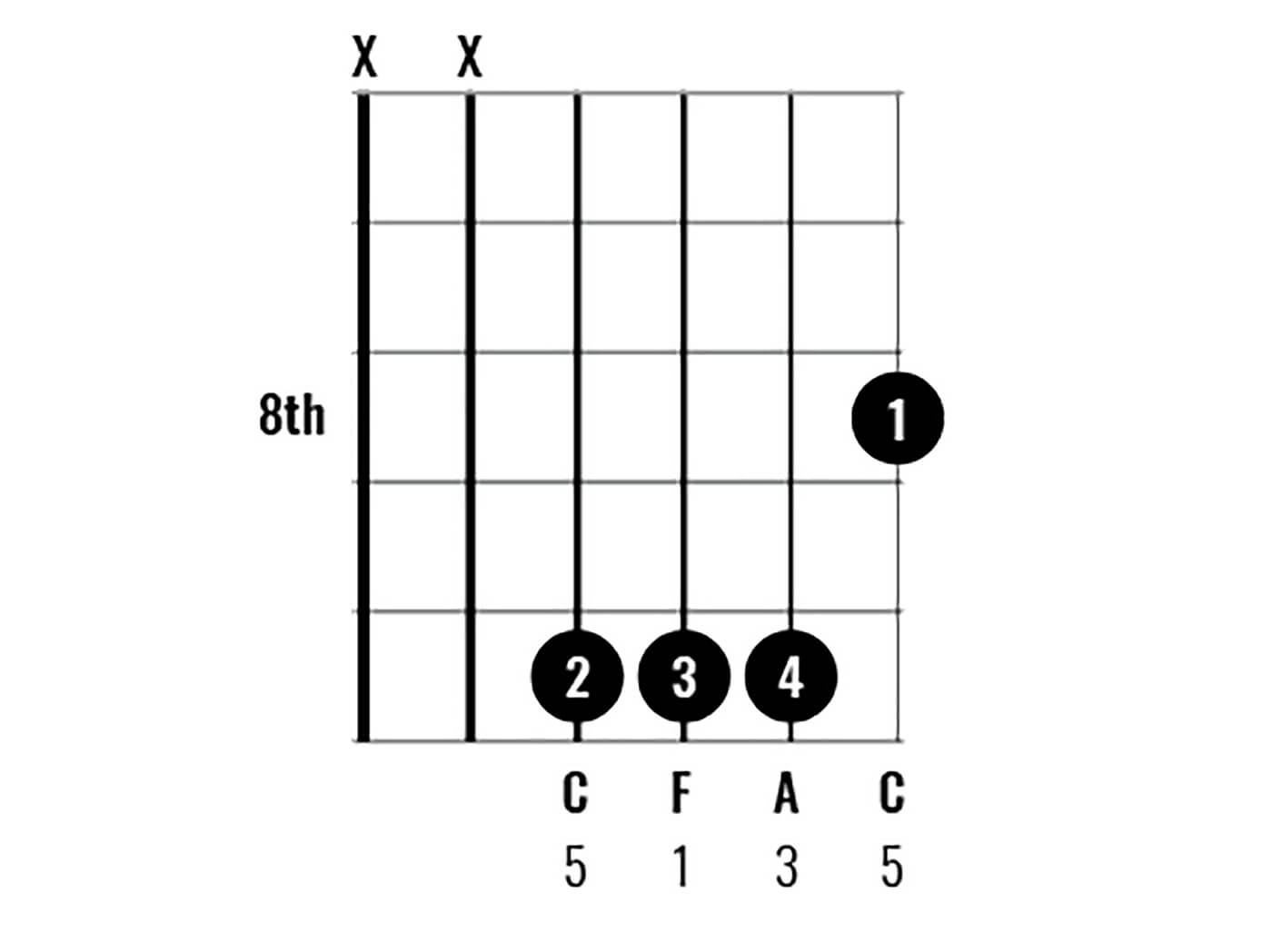 Here we have a second inversion chord with C, the fifth, in the bass. Instead of using fingers two, three and four, try laying finger three flat across the middle of the 10th fret. Figures 5, 6 and 7 can be choppy, funky or played with arpeggios and give you some useful options if the music stays on F for a few bars. 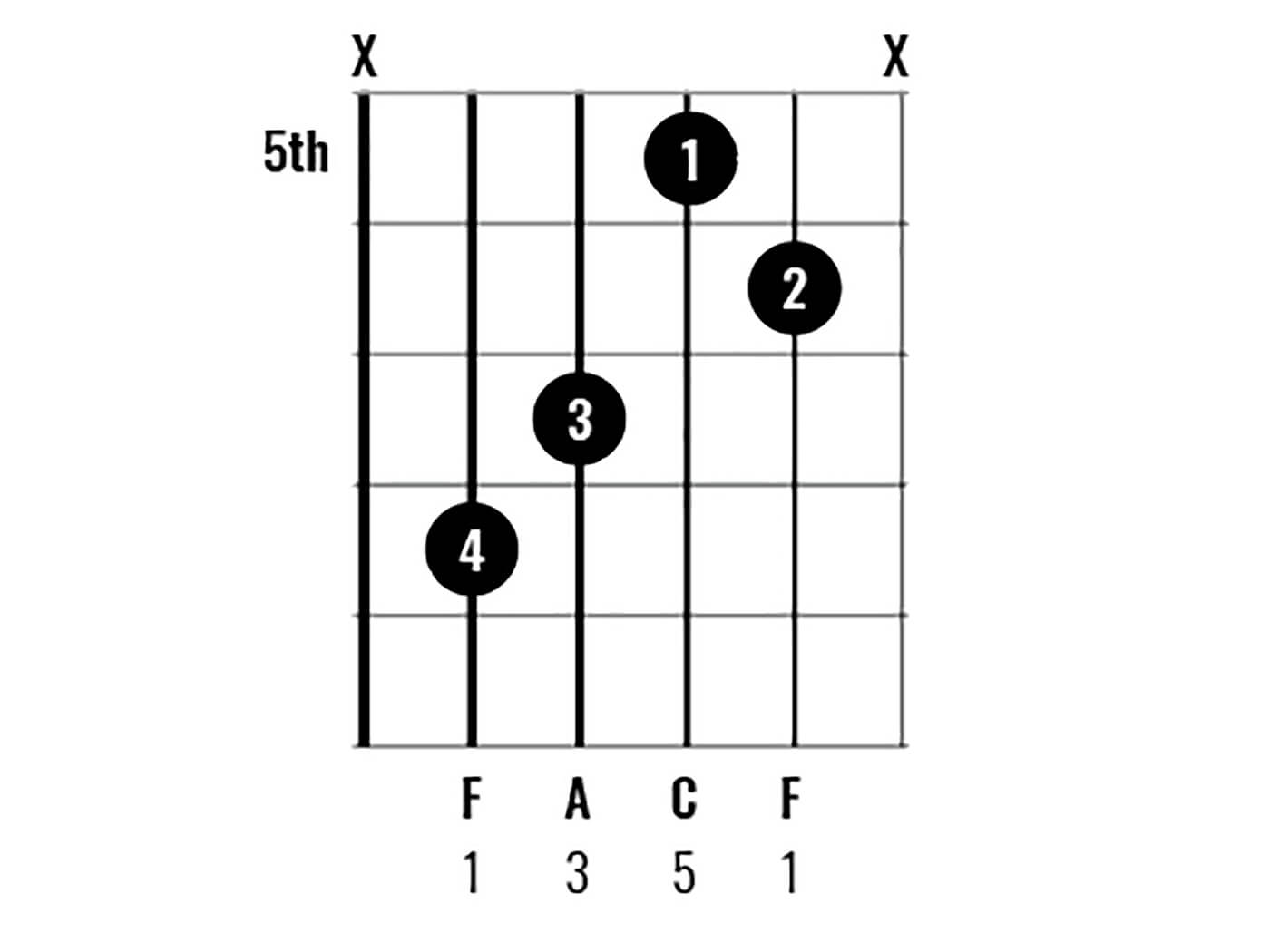 This shape is the same notes as Figure 5, but moved over to the middle four strings of the guitar. Try turning finger one into a half-barre to add the note A on the top string, as in Figure 6. This one takes a bit of getting used to but it’s a useful chord shape. 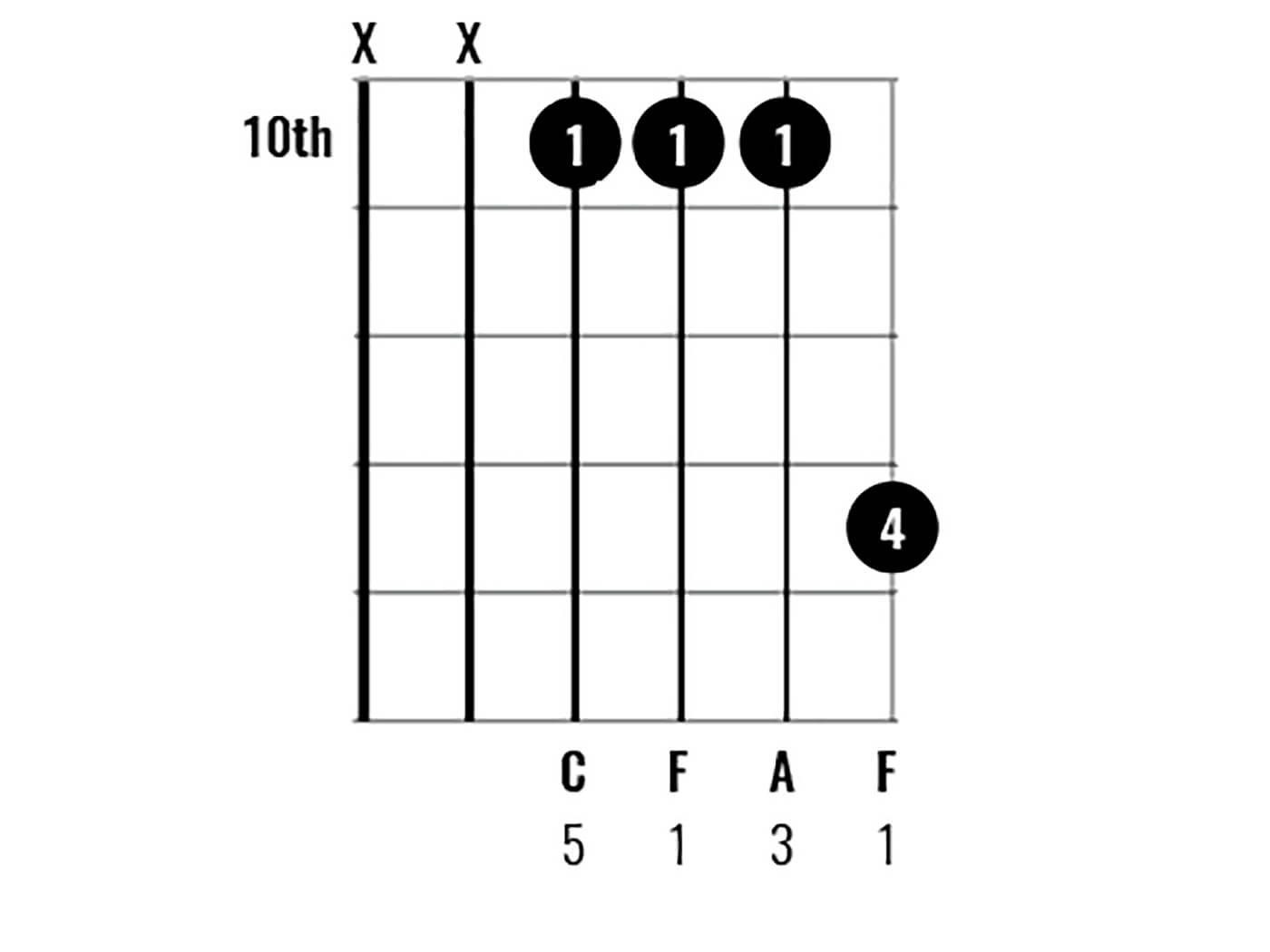 Here we have an alternative version of F/C, with the high F on the top string at the 13th fret. Lower this note one fret to E and you’ll have Fmaj7. One fret more and E♭ will give you F7. Barre the top four strings at the 10th fret and you’ll have F6. 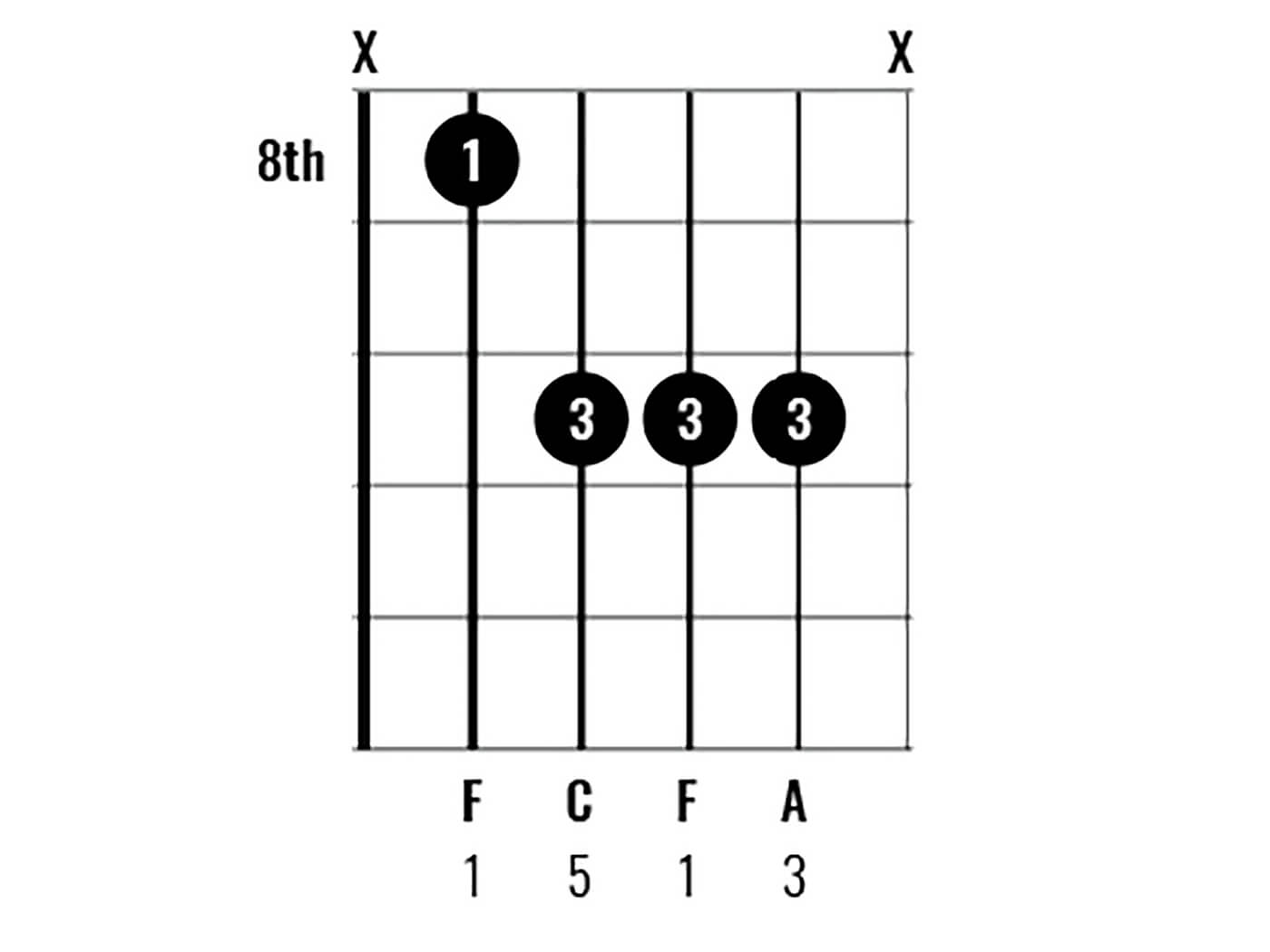 This shape introduces the ‘other’ barre chord version of F major, with the barre coming from finger three. The tip of the index finger mutes the low E string. Remember the great thing about barre chords is that they can be played at any fret. One fret down would be E major, then E♭ (or D♯) major and so on.