Joni Mitchell often uses conventional altered tunings, such as the open D tuning in Part One, but she’s also developed some which are uniquely her own. Digital tuners at the ready…

There are three common altered tunings widely seen as alternatives to standard tuning. These are, from low to high, open D (DADF#AD), open G (DGDGBD) and DADGAD. The first two present a sonorous open-string chord, but DADGAD is often referred to as a modal tuning, as the notes are derived from a scale rather than a chord. We looked at Mitchell’s use of open D in Part One and while she uses open G and DADGAD extensively, here, we’re examining her more unusual tunings.

Example 1 is in the modal tuning of DADEAD – this is easy to grasp, because it is the same as open D, but with the third string tuned to E. This Dsus2 tuning makes it possible to have either the major third (F#) or the minor third (F) on the third string. Try playing arpeggios, two bars each, on the first two chords, emphasising the notes which fall on the third, fourth and fifth strings. Start with the low D in the bass with your thumb. Then strum the D minor chord, adding the b6 from the fourth chord as an embellishment.

Staying with the same tuning and moving on to figure 2, we find a common Joni Mitchell technique of moving a shape progressively down the guitar – this one is intended to be strummed and could represent a chorus to figure 1’s verse. With altered tunings, the intervals between the strings are more important than the overall pitch. For example, CGCEGC might look puzzling, but it’s the same tuning as open D, with each string two frets lower in pitch. To avoid being confused by lower-pitched versions of the same tuning, transpose any low tunings up until the bass note is a D; you may find that it is just a lower-pitched version of an otherwise-familiar tuning.

The next tuning, DADGBD, used in figure 3, can be seen as a variation on either DADGAD or open G, as it has elements of both. From another viewpoint, it is standard tuning with both E strings tuned down a whole step; this is often called double-drop D (Elena Tonra of Ex:Re said she used this tuning, in her interview in issue 365). There is a major triad on the top three strings, which works well when using the lower three strings as an open pedal.

Play a two-bar phrase with the first two chords in the first bar and the third chord in the second bar. Then try sliding your finger around to other frets to see what works – as with all these open tunings, just playing the open strings can sound impressive.

Figure 4 also uses double-drop D, this time creating some unusual voicings of D5, G and A11 chords. Try re-fingering the D5 chord so that the C note, first fret, is on the second (B) string; this will give you a D7 chord with no third. You can play G7 by lowering the note on the third (D) string in the second chord by two frets from G to F.

Try switching back and forth between these two seventh chords before arriving on the A11 when the time is right. Alternatively, a straight A major chord is available simply by laying your first finger down in a half-barre across the top four strings at the second fret, using the open fifth (A) string as the root note. 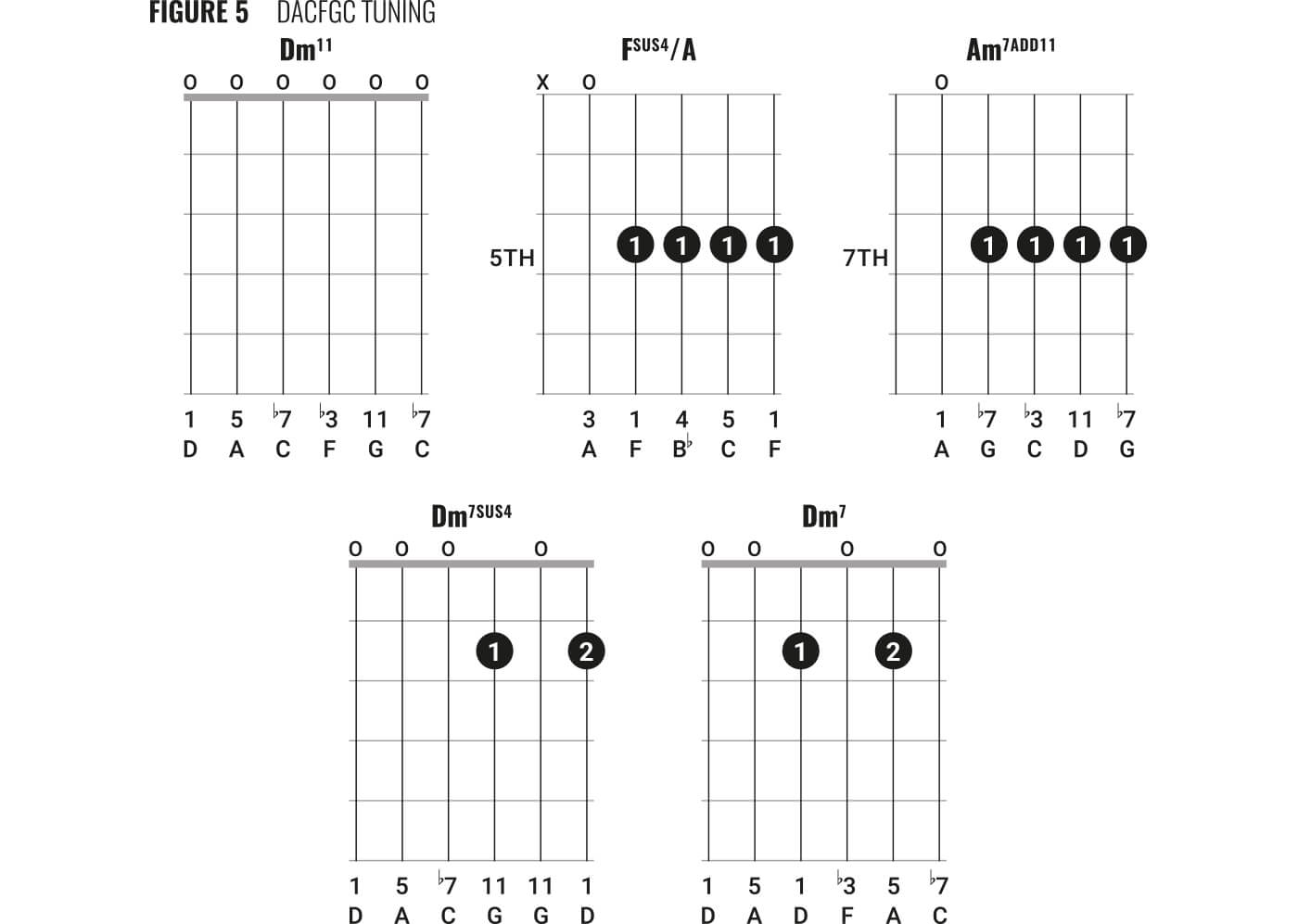 The tuning in figure 5 is DACFGC, which makes a Dm11 chord. This tuning can be found on recordings as CGBbEbFBb, but as mentioned above, moving it up to D reveals its relationship to DADGAD. The top four strings have all been taken down a whole step. Try playing 12th-fret harmonics instead of the first open-string chord; the remaining four chords can make a two-bar pattern, which works well with some gentle strumming.

On 1976 album Hejira, Mitchell uses one of her lowest tunings, BF#C#EF#B. This is clearly not an open-string chord, so we might presume that, like DADGAD, it’s a modal tuning. Live, Mitchell sometimes tunes up a half-step to CGDFGC. Shifting each note up reveals it to be the same as DAEGAD; in other words, DADGAD with a raised fourth string.

Play arpeggios using the first two chords in figure 6, keeping to the lowest four strings but occasionally adding in the top two strings for dramatic effect. Then play the last two chords as a two-chord groove and repeat ad lib, for just one of the almost endless possibilities that altered tunings open up for you as a player…