For a rock band, Queen came out with some outlandish chord sequences – but they were often played on piano. Let’s see if we can adapt them for the guitar…

The four-chord song is everywhere these days, but it has become something of a cliché, with comedy bands on YouTube stringing together medleys of songs which can all be played over the same harmonic progression.

Rewind back to the 1970s and we find songs by Queen, and particularly those by vocalist/pianist Freddie Mercury, which make use of dozens of different chords. Though originating on piano, this kind of chord sequence can be played on guitar by plucking the bass note with the thumb, to mimic the pianist’s left hand, and using the index and middle and ring fingers to play the upper notes of the chord, which would be played by the pianist’s right hand. 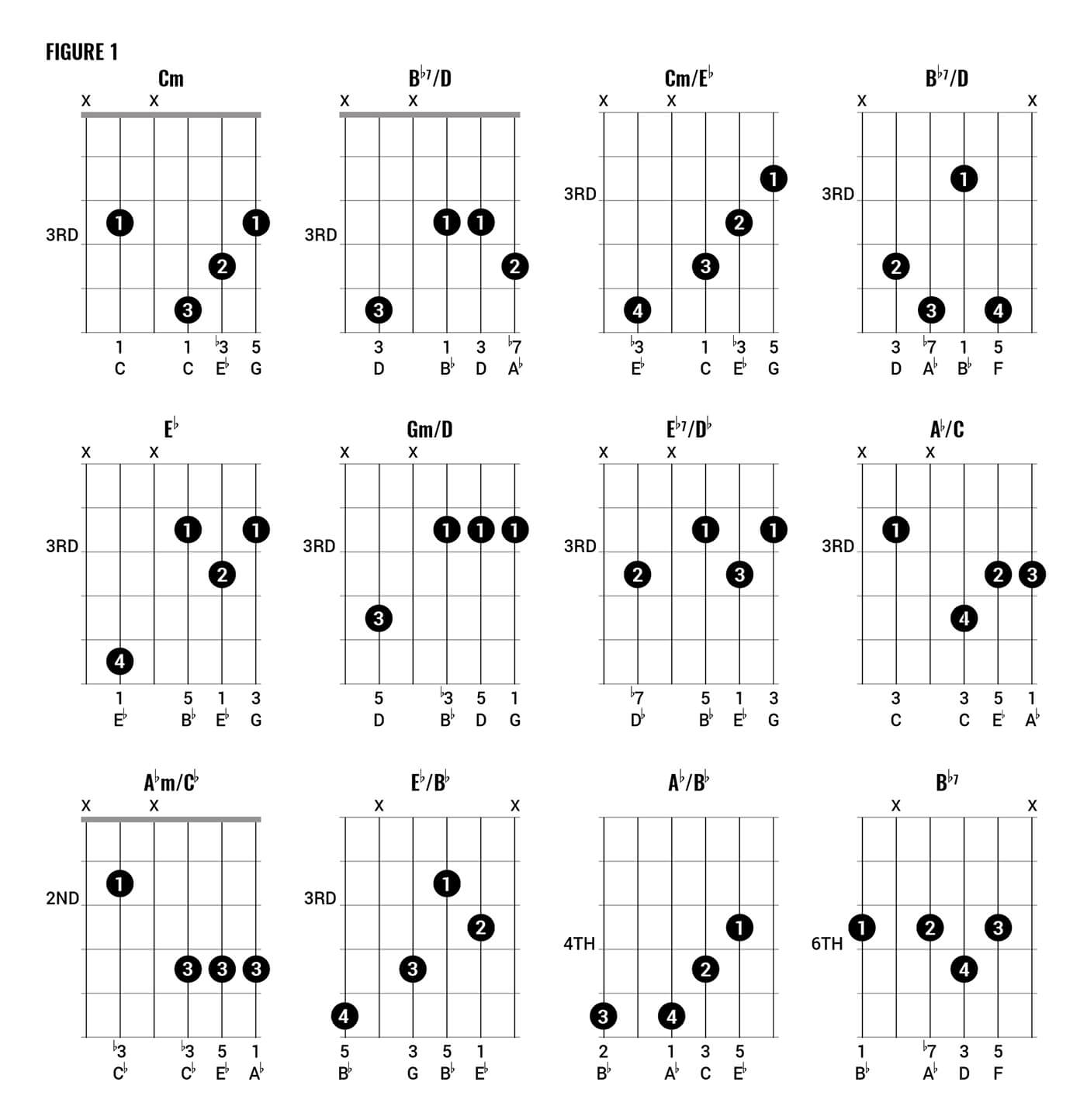 Figure 1 gets us started, with a sequence of 12 chords; in a typical Queen song, these 12 chords might represent no more than the first eight bars of a verse. Play all four notes of each chord at once, using fingerstyle as described above, and slightly staccato. The first four chords get four beats each and the remaining eight chords get just two beats each, making an eight-bar sequence.

The ‘cut-off’ effect of staccato can be achieved either by releasing the pressure from the fret hand, but leaving the fingers in touch with the strings, or by damping the strings with the pick-hand fingers shortly before re-picking the chord. See which approach works best for you. 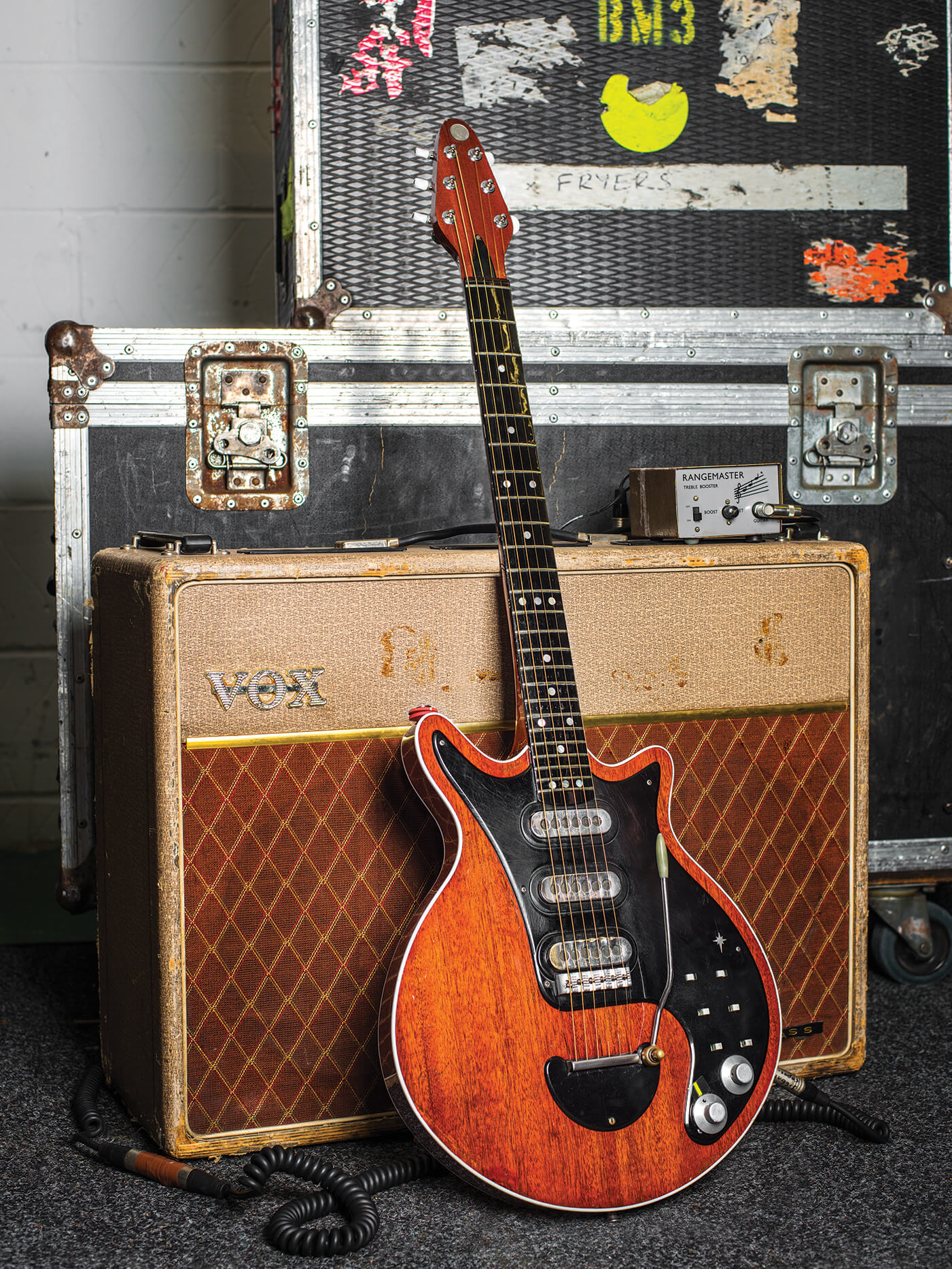 It’s possible to play this exercise with a pick, but you have to be careful to mute any unwanted notes. For example, in the Cm chord, the index finger needs to be arched so that it holds down the fifth (A) string and the sixth (E) string, but not the fourth (D) string. For B♭7/D, the underside of finger three can be used to mute the D string. There are many similar solutions available in the subsequent chords.

This chord sequence is not a transcription of any particular song, but it is inspired by the kind of voicings found in a typical Queen piano part. Notice how the bassline between the first four chords keeps things moving forwards, as does the powerful descending line from the E♭chord all the way to E♭/B♭and B♭seven. Also, the third and fourth chords are essentially a re-voicing of the first two chords to add interest. As we go, be prepared to come across some unfamiliar chord shapes which might need some careful practising.

Tricky changes can be worked on separately back and forth; you don’t always have to try and play the whole eight bars. 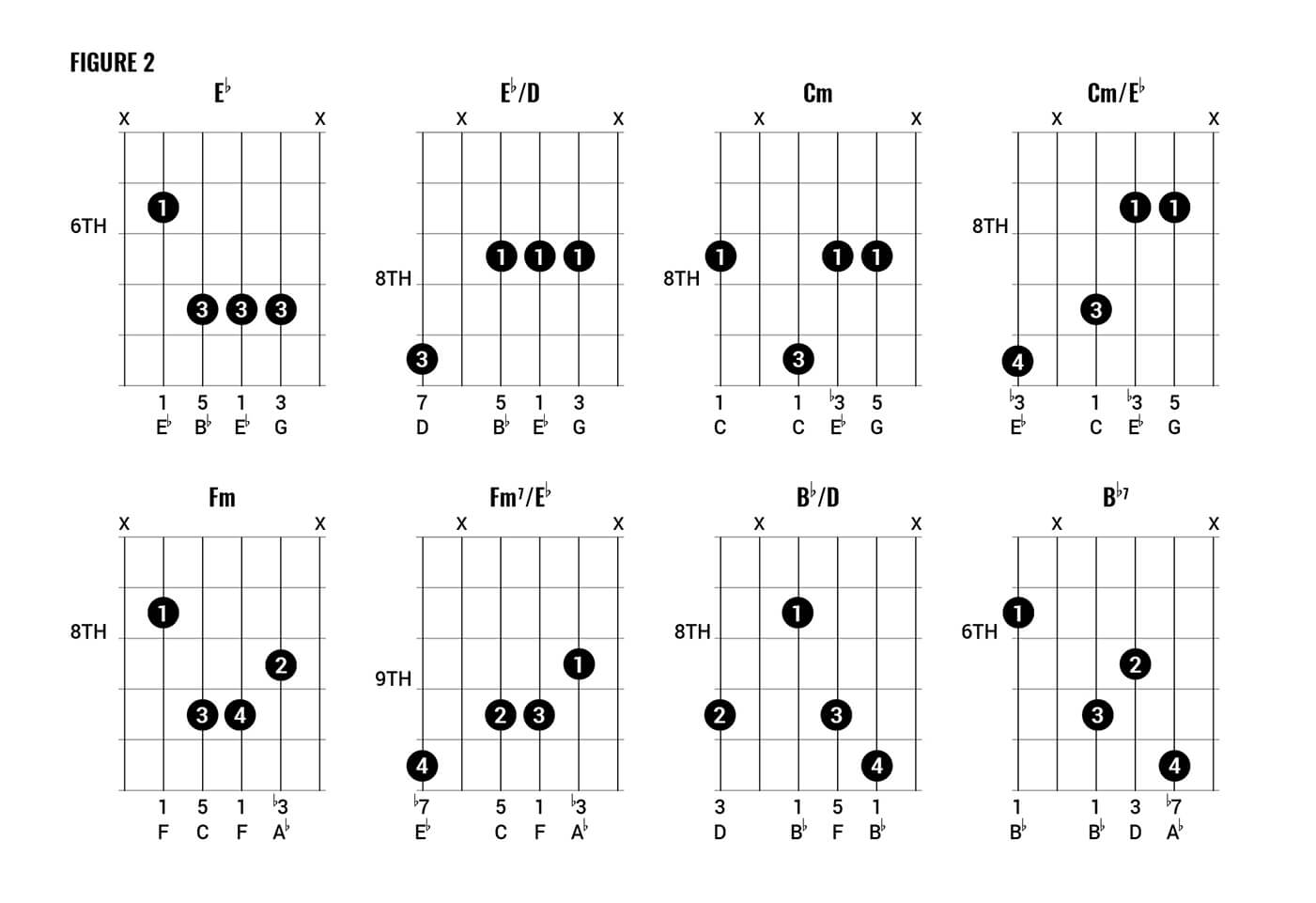 Figure 2 could be played as a series of arpeggios, each time picking with the thumb on the bass note and then with the other three fingers on the remaining notes of the chord. If you take away the slash chords, you’re left with a four-chord sequence similar to those found in contemporary pop songs – however, leaving them in place creates a set of changes which seems to owe something to the Baroque period and the music of Bach. It works as either a four- or eight-bar sequence and can be effectively looped around.

A more pianistic approach to this chord sequence would be to play the bass note with the thumb, the note on the fourth (D) string with the index finger, and then use the middle and ring fingers to play the notes on the third (G) and second (B) strings simultaneously before finally picking the note on the fourth (D) string again with the index finger. This works for the whole sequence and will help to bring out the strong bassline. Notice Figures 1 and 2 both end on B♭7, but with two different voicings.

Figure 3 introduces the idea of stopping two strings with one finger in the B♭6 chord. Play this chord as an arpeggio, from the bass note to the top note, then release the little finger and pick the note which is held down by the barre on the second (B) string, sixth fret. For the Gm add9 and Cm add9 chords, pick the notes of the chord and then release the little finger, picking the note under the barre on the first (E) string. Finally, the Fsus4 chord can be made into F major either by sliding the little finger down a fret or by stopping three strings with the third finger. Like figure 2, these four chords make a repeatable sequence. For extra fun, try recording each sequence and playing a Brian May-style solo over the top!

Check out our other Chord Clinics, too.