For our second part of his exploration of the CAGED system and how it can help you, David Henriksson asks you to dig a little deeper into those tried and tested pentatonic boxes. 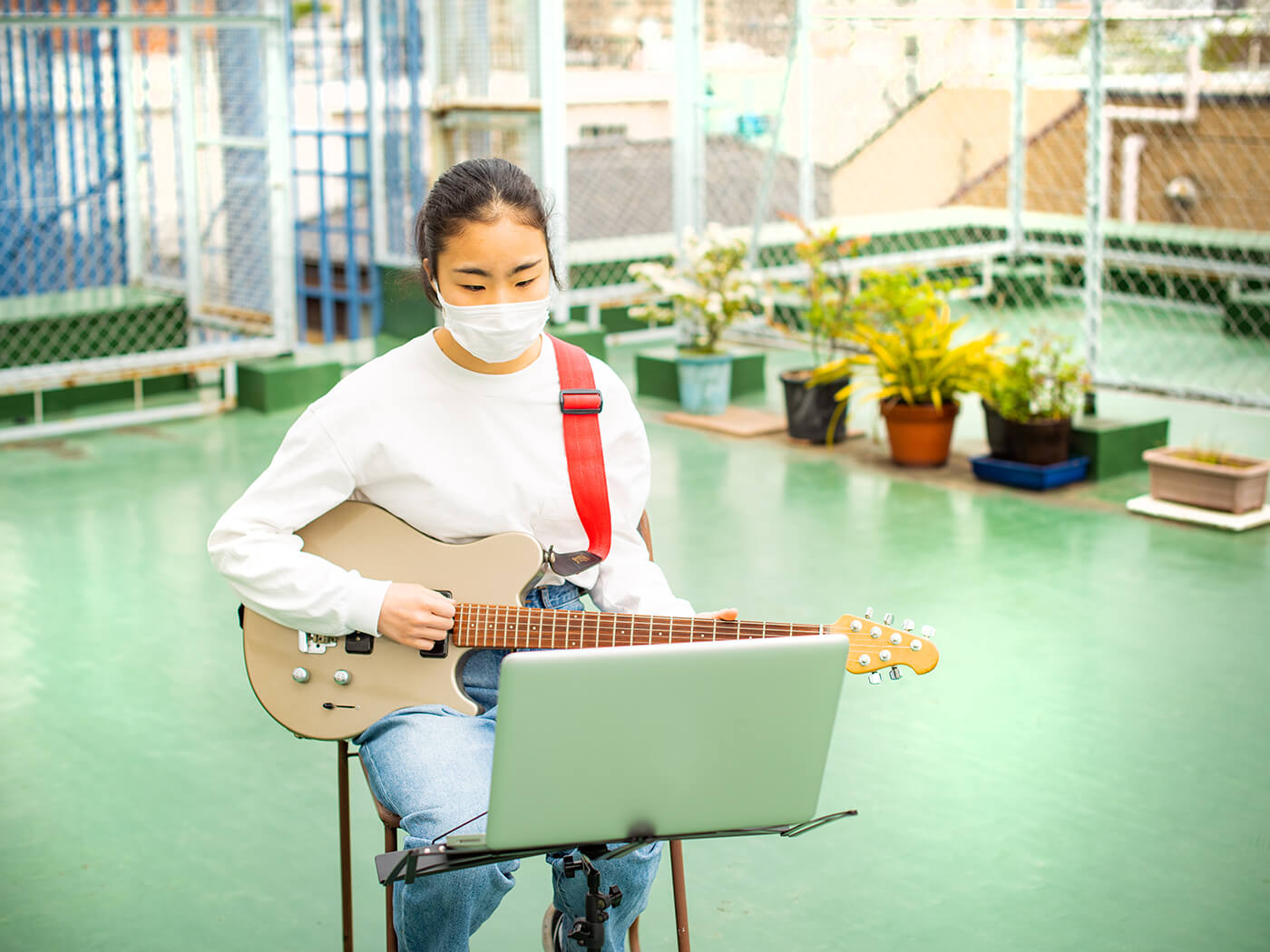 Pentatonic scales are among the first tools most guitarists learn early on when they want to learn how to play a solo. A lot of amazing music has been made using pentatonic scales and a lot of us love them, but I feel like a lot of players just learn the shapes but never really understand how the scales work or how they’re connected to the chord progression.

It’s common to name the pentatonic boxes by numbers (A minor pentatonic box 1 for example) but in many ways it makes more sense to learn them based around the chord shapes they are connected to, as we wanna know how the underlying harmony and the scale connects.

The CAGED System is based around five basic chord shapes, these chords are all triads which means they consist of three different notes. The pentatonic scales consist of five notes (penta means five in ancient Greek) which means we’ll have to add two more notes in each octave to these triad shapes to find our pentatonic scales. We’ll start with the major pentatonic scale, but first it’s important that we understand how this scale is constructed. The C major scale consists of the following seven notes: C, D, E, F, G, A, B. This is, essentially, a sequence of whole steps and half steps (steps are also sometimes called ‘tones’ and the terms can be used interchangeably, while a ‘half tone’ is also called a ‘semitone’).

The sequence of whole steps and half steps in the major scale is:

So that means we have half steps from the 3rd to 4th note of the scale and the 7th note back to the root note we started on, only now the root note is one octave higher. Try to play this sequence of notes from all of the open strings on your guitar. This should sound quite familiar as most of the harmony and melody in western music derives from this scale.

But now, let’s go back to the major pentatonic, this scale leaves out the fourth and the seventh degree of the full major scale. This means, in the key of C, that instead of a whole step between E and F and a whole step between F and G we now have a step and a half between E and G. The same thing happens when we leave out the B note and instead end up with a step and a half between A and C. This means, there are no half steps in a major pentatonic scale. I’ll get back to the pros and cons of this later.

Now grab your guitar because it’s time to play. If you’ve worked on the material from first part of this lesson series, you should have the triad shapes down already. Now let’s add the second and sixth degree from the major scale to each major triad. 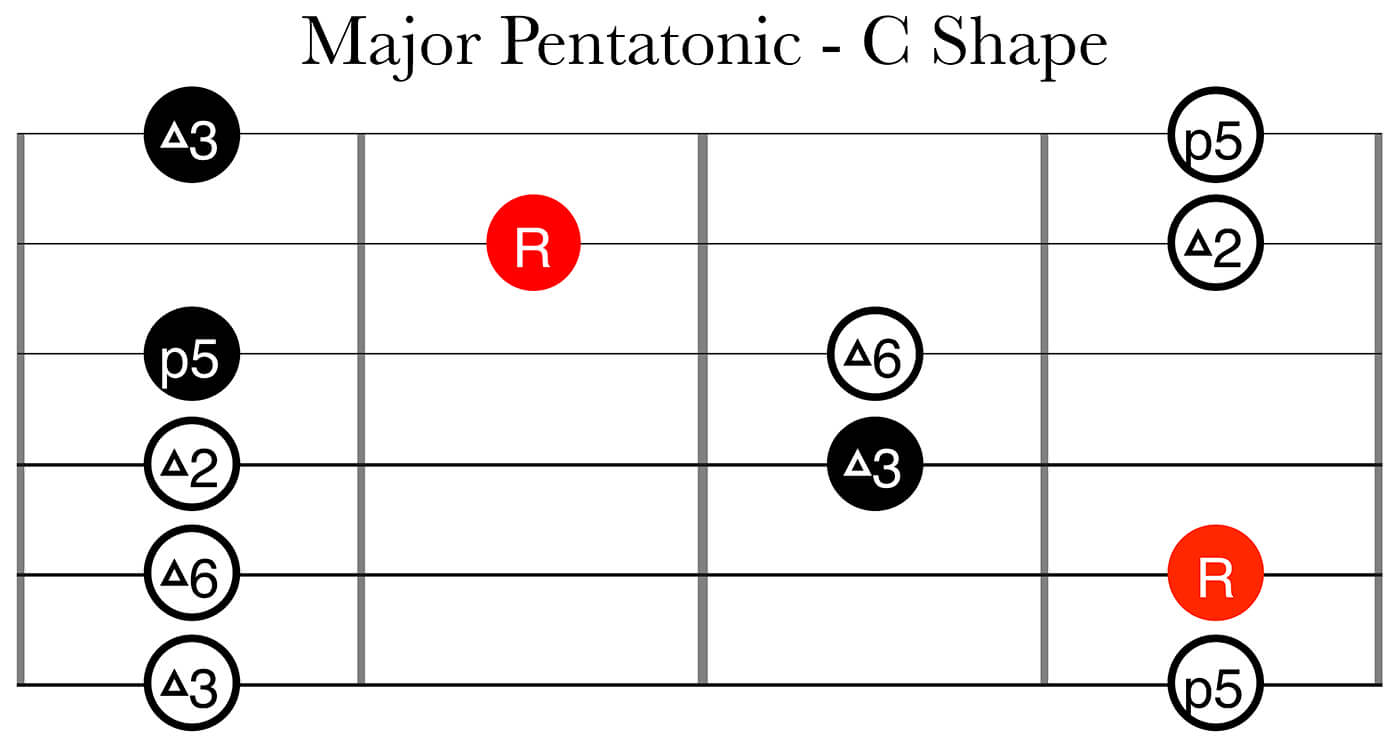 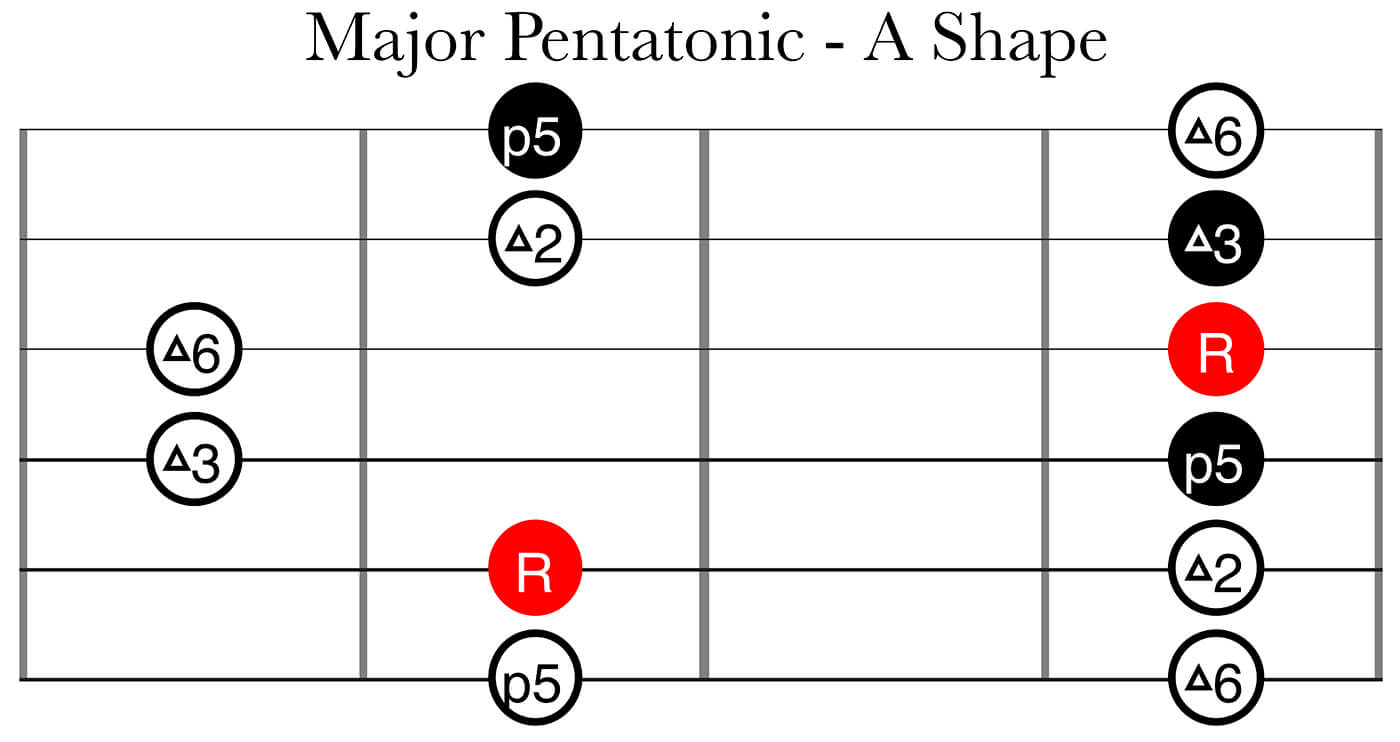 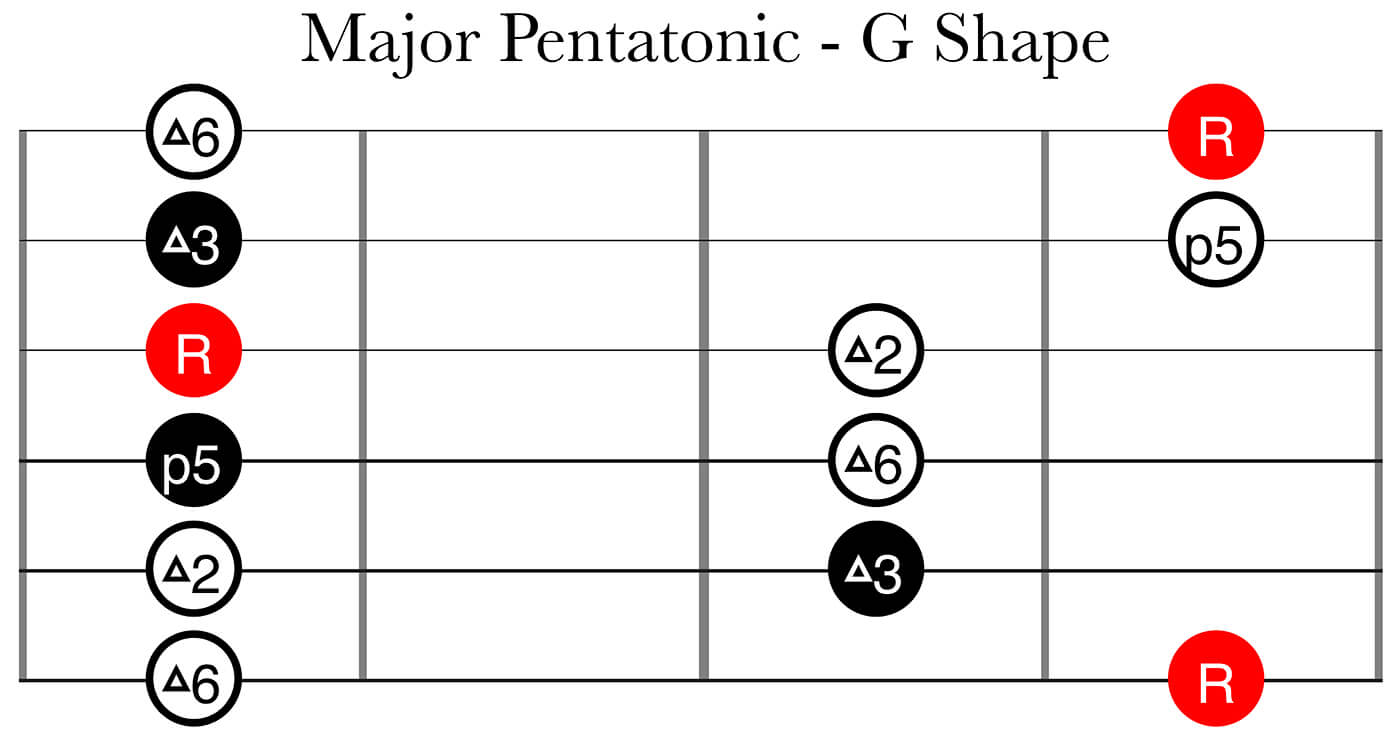 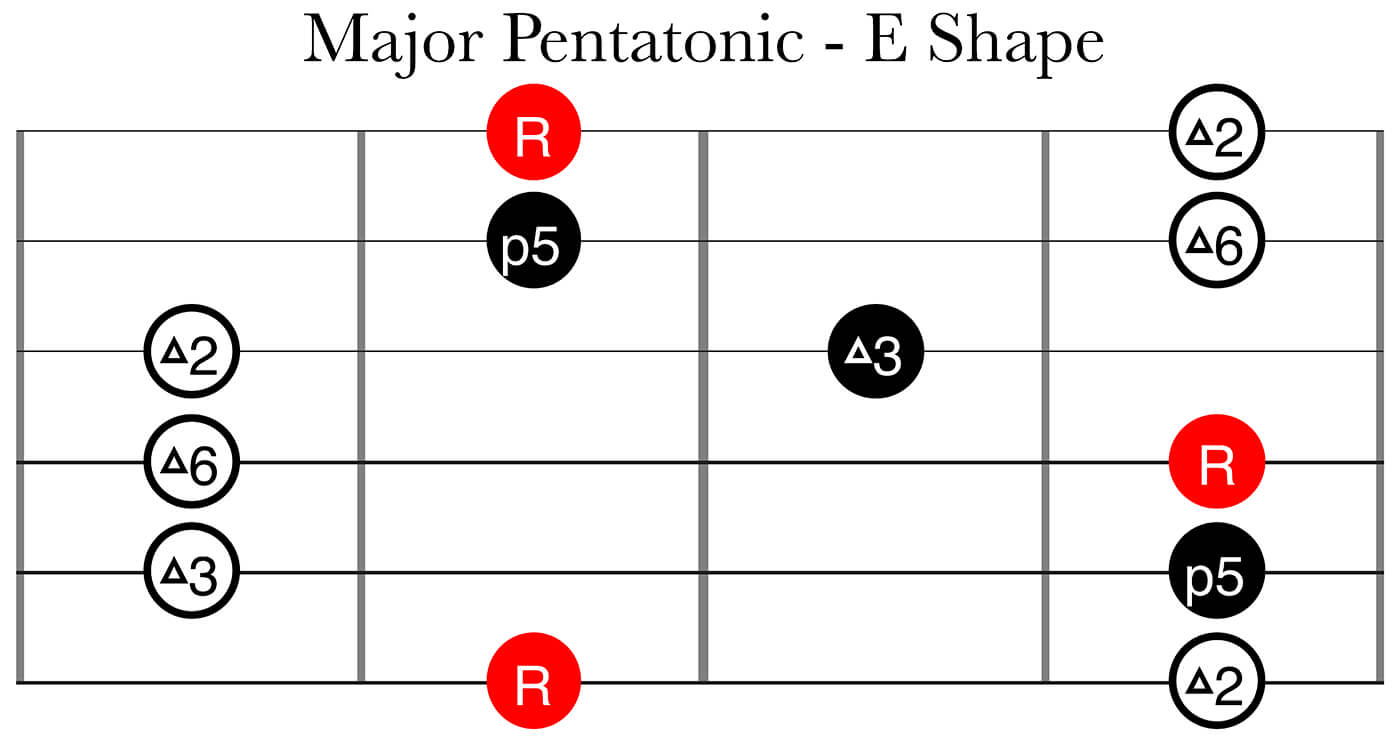 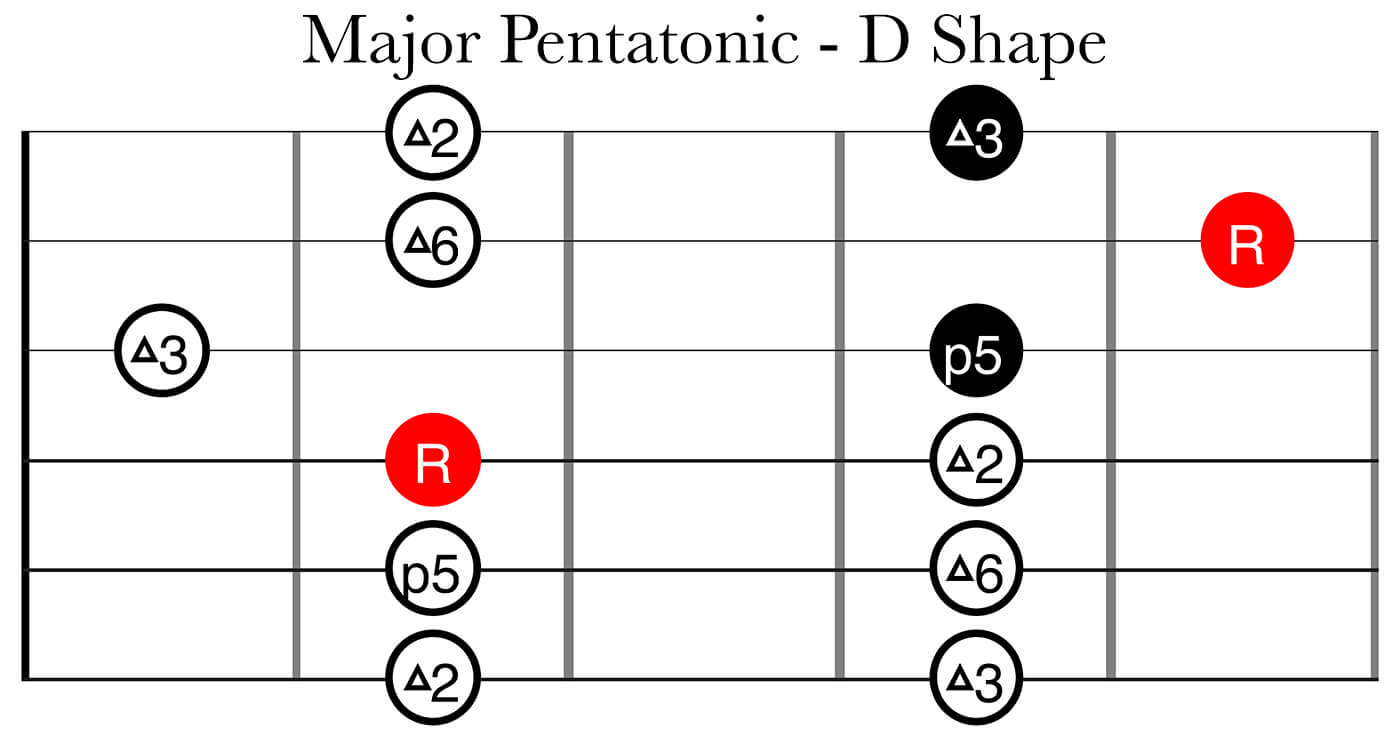 In these diagrams the notes from our core chord shapes are solid (the root notes are red) and the notes we add for the full major pentatonic shapes are hollow. I’ve also marked all the intervals so you can see where all the major 2nds are for example. The triangles mean major 2nd, major 3rd and major 6th while the p5 refers to a perfect 5th (all intervals are taken from the major scale). We will get more in-depth with intervals in the next part of this lesson series.

Now let’s move on to the minor pentatonic. Quite a few of you might already know these scale shapes or ‘boxes’ as they’re commonly referred to – but bear with me. If you read these following paragraphs, I can hopefully get you to understand the minor pentatonic on a deeper level.

The sequence of whole steps and half steps in the C natural minor scale is:

So that means we now have the half steps between the 2nd to 3rd note of the scale as well as between the 5th and 6th note. Again, try playing this sequence of notes from all of the open strings on your guitar.

When playing the minor pentatonic we remove the 2nd and 6th degree of the natural minor scale, creating a larger interval of a step and a half between the root and the minor 3rd (C to E♭) as well as between the 5th and flat/minor 7th (G to B♭). As with the major pentatonic, there are no half steps in the minor pentatonic. This makes these scales more harmonically ‘safe’ when improvising for example, but at the same time less colourful and exciting since they in most cases don’t contain enough notes to outline the underlying chord progression. However, pentatonic scales are still super cool sounding and useful – I just want you to be aware of the limitations of a five-note scale without any half steps. Anyway, here are the fingerings: 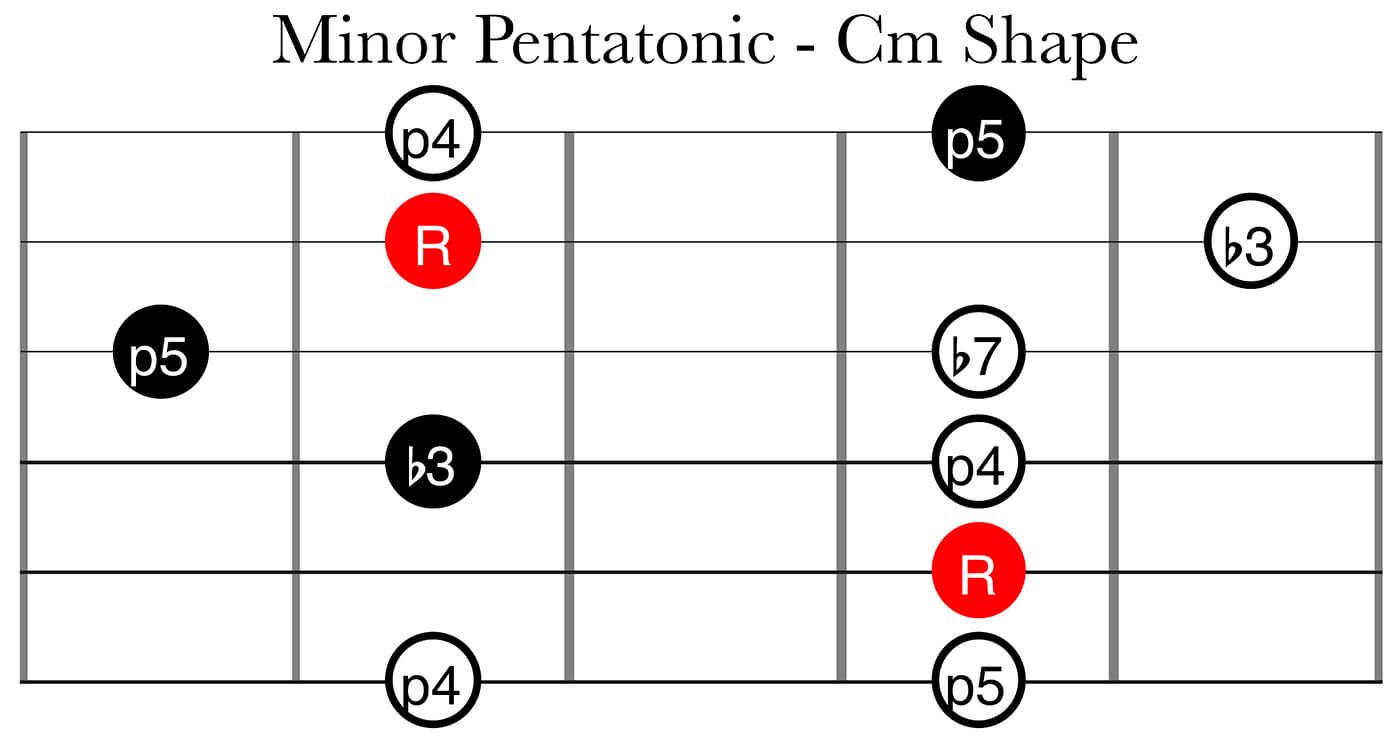 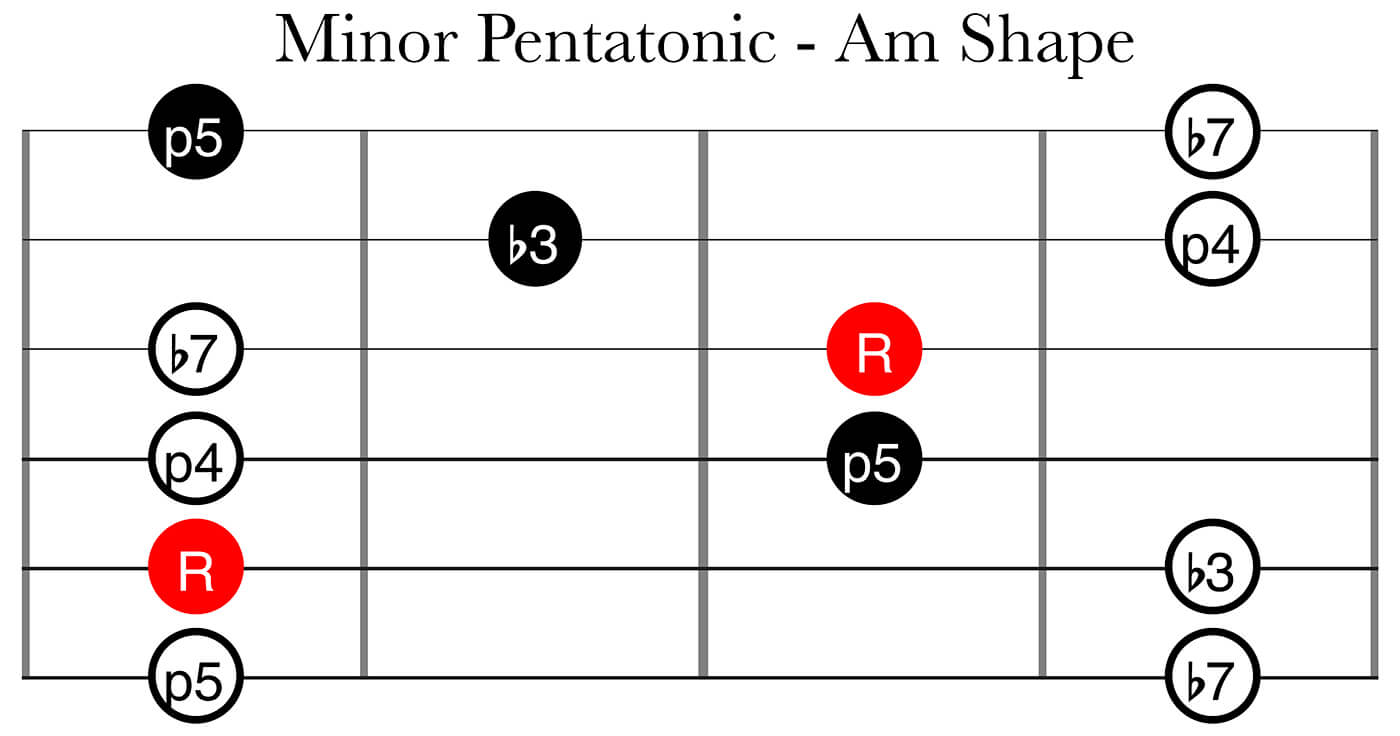 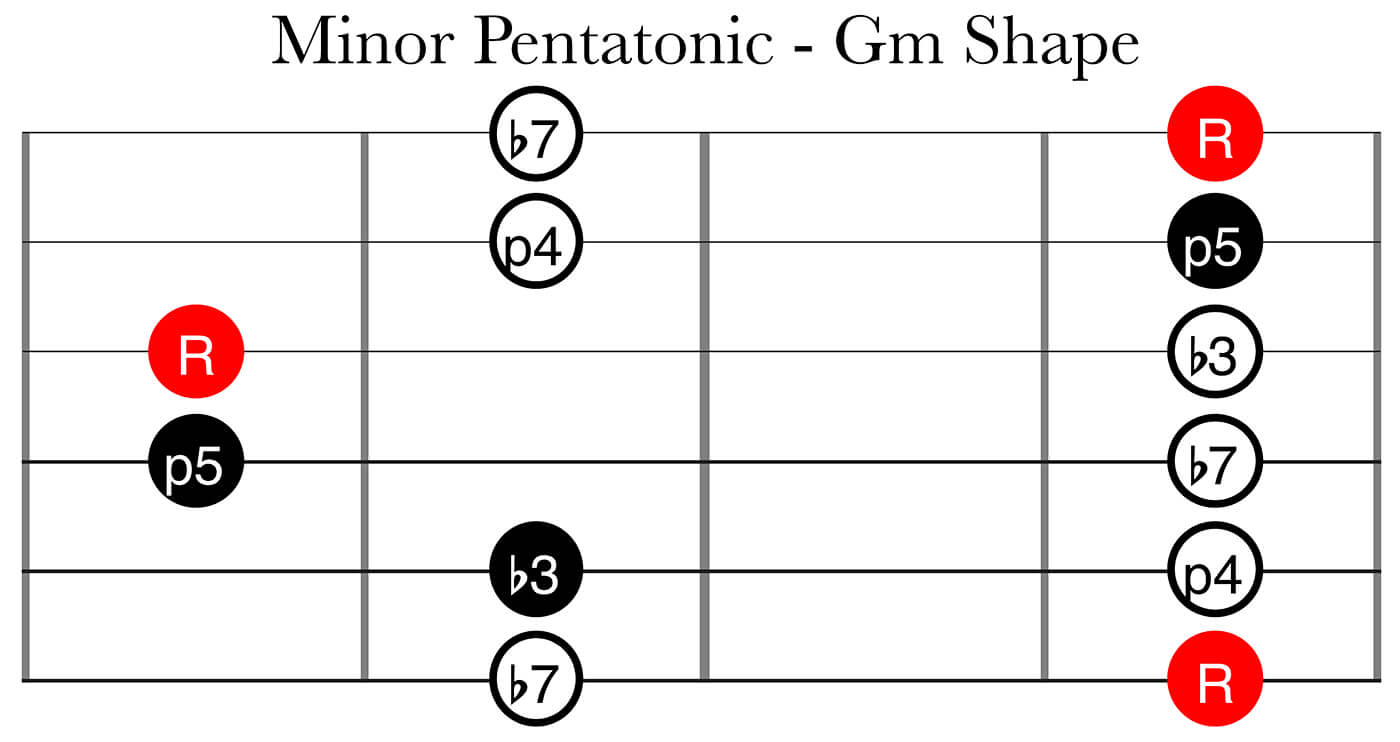 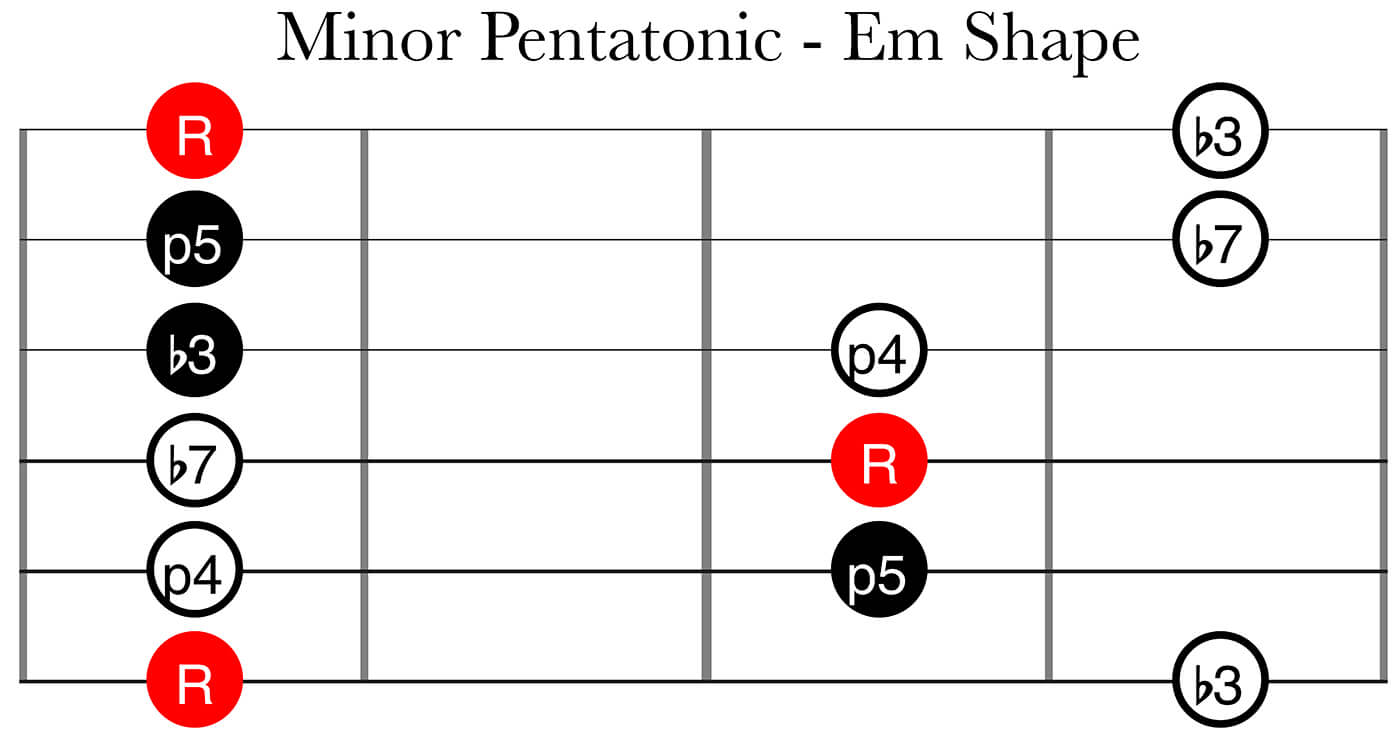 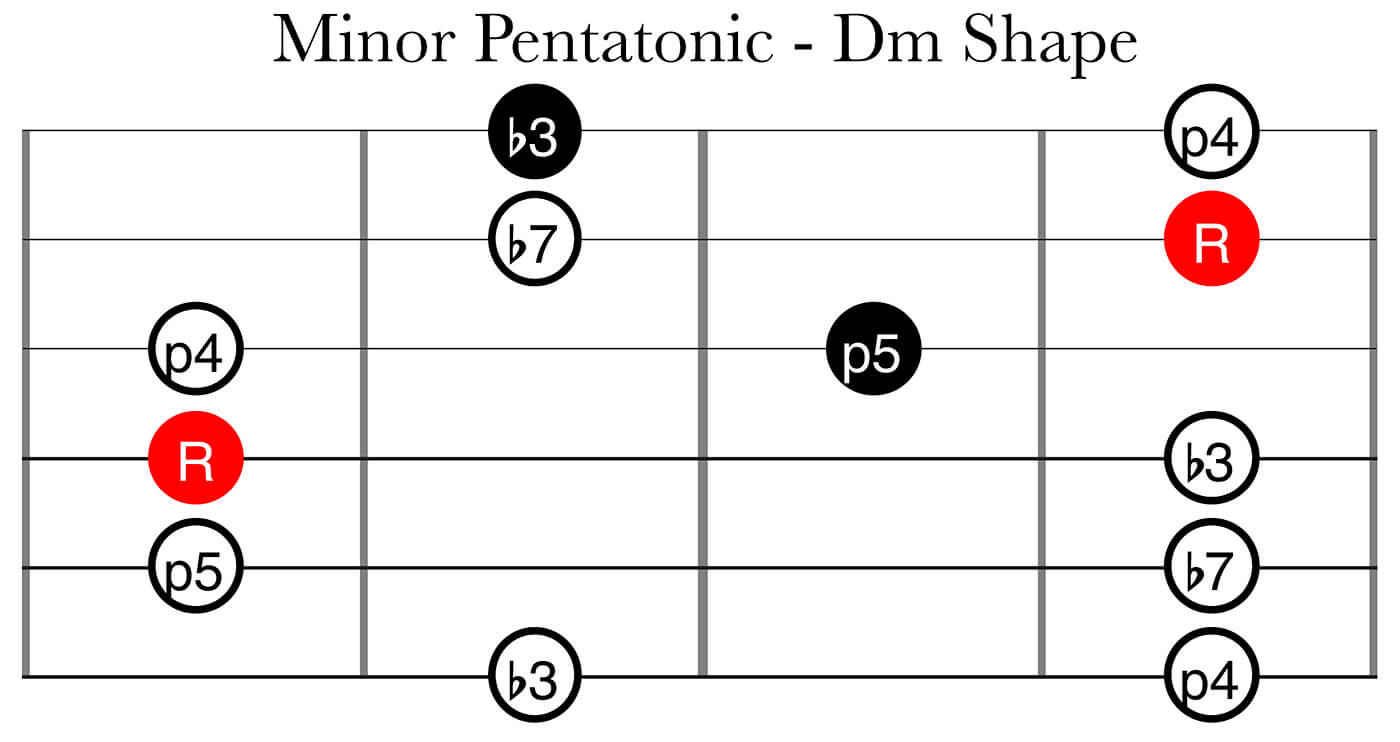 Both of these scales feature the root and the 5th, but the rest of the tonal material differs between the two scales. If we look at it like this, you might find something that you can use to easier navigate between major and minor as well as different positions and keys:

Now, try changing the tonality of some of your own minor pentatonic licks into major using the same approach. Also try it the other way around, turning major ideas into minor.

The ones of you that have been using the pentatonic scales in the past might be used to calling the fingerings ‘Box 1’, ‘Box 2’ and so on. For example, the C minor pentatonic box 1 has the root note on the 8th fret of the low E string – this would be what we call the ‘minor pentatonic Em shape’ when referring to the CAGED System.

As long as we stick with minor, people seem to agree to call that ‘Box 1’. However, when I quickly Googled ‘major pentatonic box patterns’ I found a few contradictory results. Some people call the ‘major pentatonic G Shape’ Box 1 and others call the ‘major pentatonic E Shape’ Box 1. This could of course be confusing when trying to communicate with others or when learning how to navigate the fretboard. In my opinion, the obvious benefit of naming the positions with the CAGED system is that you’ll connect the scale to the chord that it’s based around and harmonically connected to. 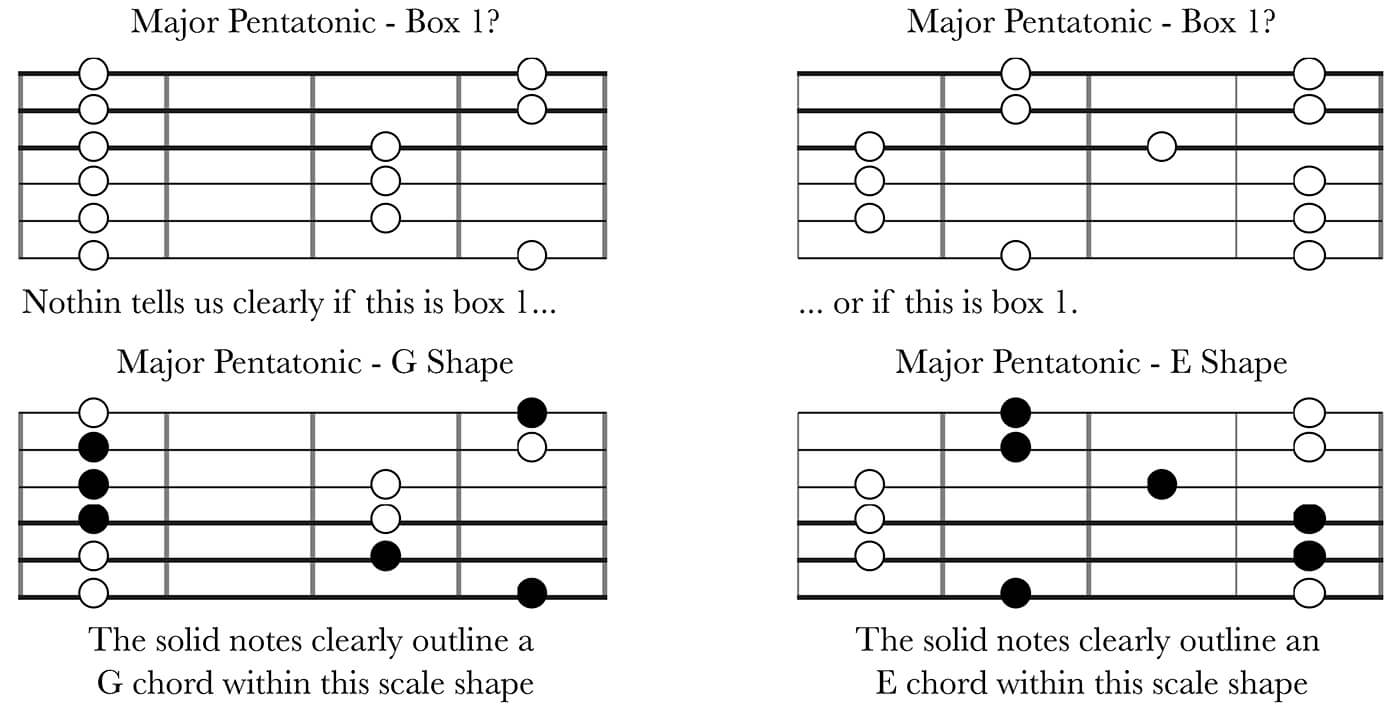