The Northern Irish bluesman’s kinetic style fused blues and rock with a virtuosity that inspired scores of guitar players to follow him – here are the fundamentals of his scorching technique.

Gary Moore’s long career saw the Belfast born virtuoso immerse himself in everything from hard rock and heavy metal, to jazz fusion at various points, but it’s his reinvention in the early 90s as a bona fide bluesman on the classic Still Got The Blues that has ultimately shaped his legacy.

But while Moore spent the last two decades of his tragically short life establishing himself as a bona fide blues hero, with Peter Green’s ’59 Les Paul ‘Greeny’ in hand and a heart full of Albert King licks, his hard-charging days in Thin Lizzy and Skid Row would sometimes peak through to give his blues a rockier edge that fans loved.

In this lesson we’re going to look at four licks that show off some key aspects of his style, from melodic slow bends to speedy pentatonic flurries.

Each of these licks are in the key of A Minor and use a couple of different pentatonic shapes as well as some natural minor notes. They will give you some Gary Moore style concepts to work with in your own playing. While the examples here are all in 6/8, you could easily apply the concept over a 4/4 solo too. 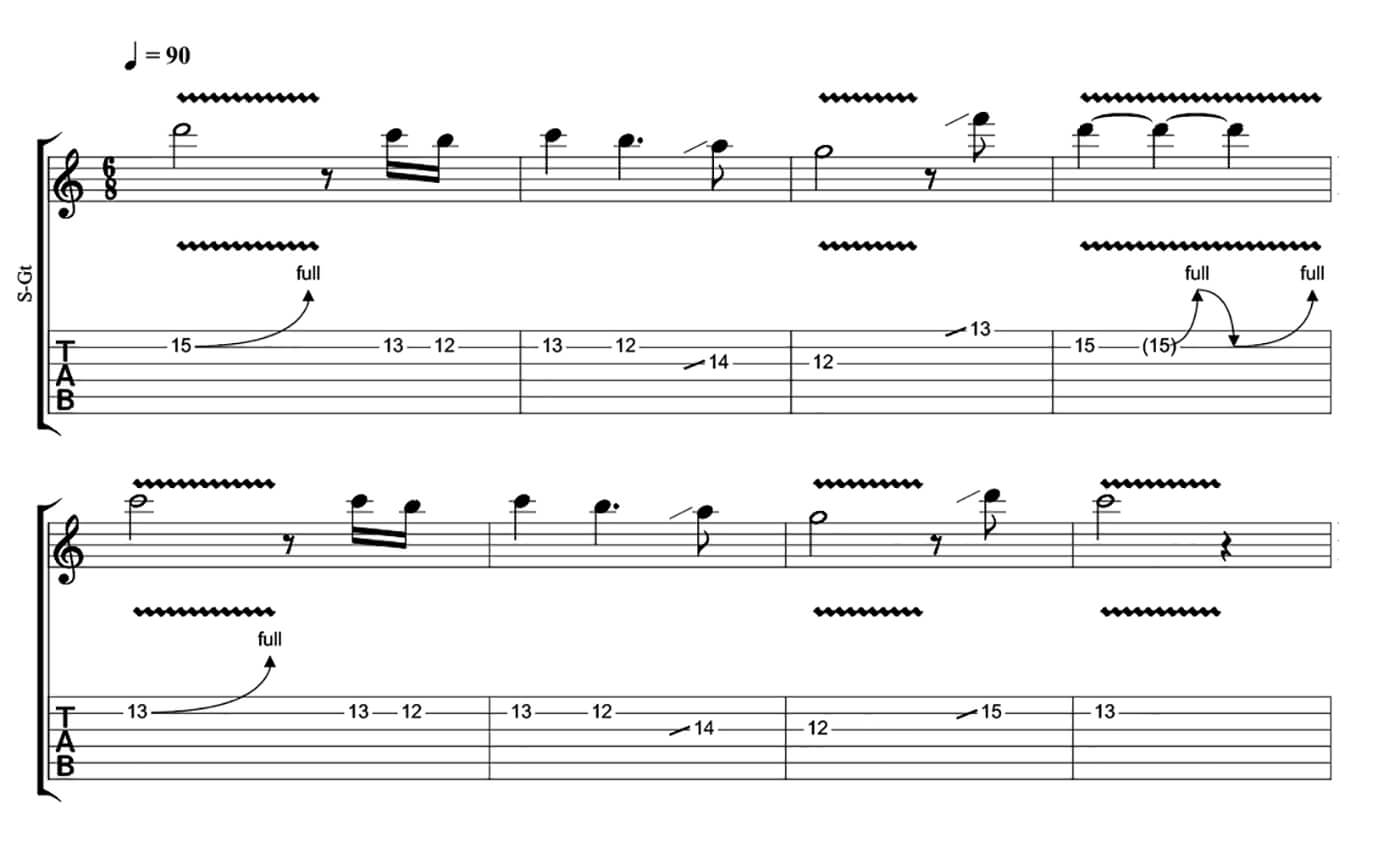 This eight-bar lick showcases some of Moore’s melodic phrasing. The emphasis here is on the phrasing and the feel, rather than the density of notes within each bar and is based around the fourth minor pentatonic shape in the key of A minor. The bends that start each of the four-bar phrases should be very emotive. Gary Moore would often rake into bends so don’t be afraid of a little sloppiness to add some feel to this.

On the other side of his playing, Moore was known for his ferocious chops, and as his earlier days in the rock and metal world evidenced, he could play as fast as the best of them. This lick demonstrates his fiery technical abilities as it descends through the A matural minor scale. The initial bend should be raked into for maximum impact, dig in to get the bite from the strings. The start of the second bar contains some speedy 32nd notes so slow things right down before attempting it at full speed. The lick ends with a descending flurry of notes that from the minor pentatonic. 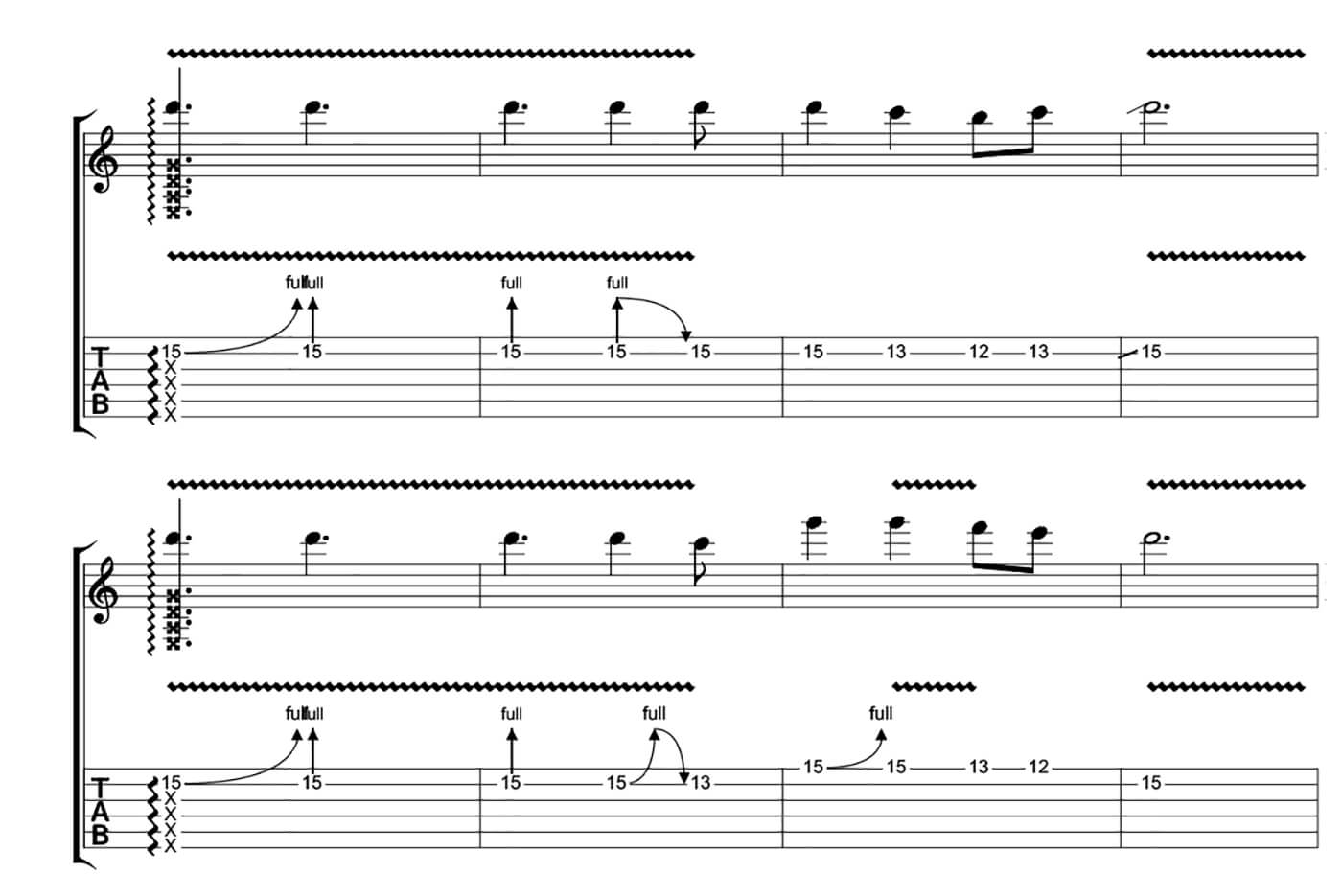 Here’s another melodic soaring lick based around the fourth minor pentatonic position. This example also uses lots of raking into the front notes and there are also plenty of other ‘natural’ loose moments where some slides or string noise could be integrated to reflect the way Moore approached his playing, which focused more on capturing the feel and energy of the moment than being perfectly clean and tidy. The lick starts both times with a held, repicked string bend with generous amounts of vibrato applied.

This final example takes you up to the upper echelons of the fretboard to the first pentatonic position at the 17th fret. There are some natural minor notes thrown in here for good measure. Strap in because this is fast, with a bar of 16th and 32nd notes that will require some slowing down before ramping the speed back up. Rake into that first bend to get it to scream and then dig in for the descending run. Moore would often place speedy runs like this, and Lick 2, at the end of some of his more mellow passages, often transitioning to a more up tempo or faster passage of his solo.