Oasis’ Noel Gallagher was a man who knew a thing or two about penning a hit, and the bedrock of it all was his clever approach to chords and songwriting…

Noel Gallagher’s knack for a hooky chord progression was at the heart of the stratospheric success that Oasis enjoyed from their lightning in a bottle 1994 debut Definitely Maybe to their acrimonious split 15 years later. The varied solo work the 52-year-old Mancunian has produced since proves that he’s still got plenty of hooks left in the tank, but for this lesson we’re going to take a look at the tricks and techniques he used when he in his Oasis pomp as guitar icon and a true rock ’n’ roll star.

Here we introduce a simple but effective chord sequence based on moving a shape around the guitar. The idea is to play an arpeggio on the B7add11 chord keeping to the middle four strings, but just occasionally adding in the slight clash of the open E string. Then slide the shape up to the 7th fret where it becomes E7 and continue as before. You can add the open E again if you like, but we preferred it without. Go back and forth between these two chords and then to complete the sequence strum a bar of F# and then crash into the E chord, holding it for 4 beats.

You can repeat ad-lib, and try recording it and adding a solo. It has a similar flavour to a blues, but with an altered progression.

Throwing one unusual chord into a sequence that is otherwise straightforward is a great way to take a song somewhere unexpected, and make a routine set of chords suddenly seem like the best thing since anybody thought of root, third and fifth. Cue the first four chords of figure 2 which make a useful four-bar sequence. It’s a bit like the I-V-VI-IV except here we have A minor, chord II, where chord VI usually goes.

We’ve deliberately chosen the full-fat barre chord approach here – this is the kind of part you could imagine being played on rhythm guitar, and it’s meant to be heavy. 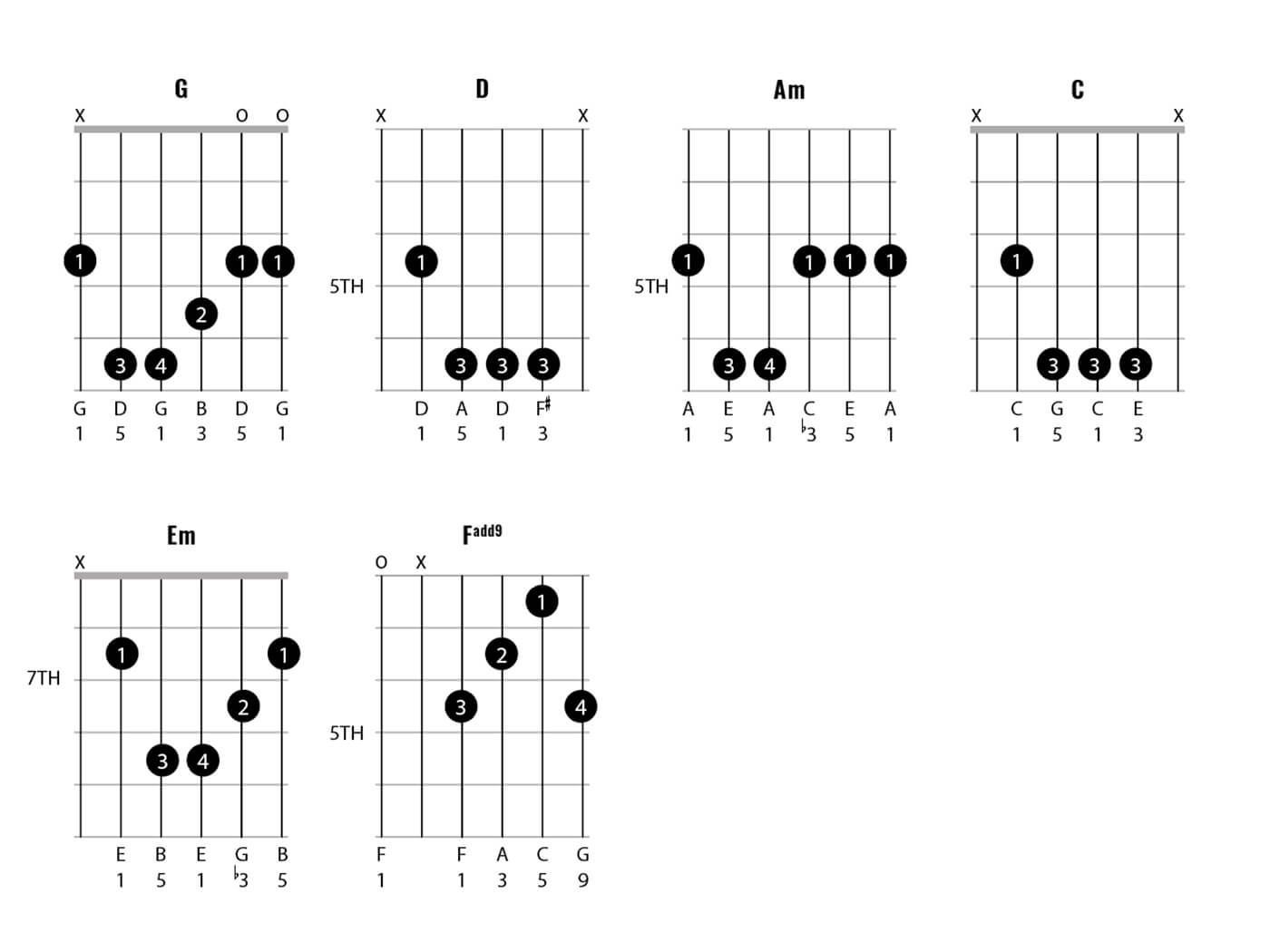 This works really well played over figure 2. Try adding the high three-note voicings of G, Gsus4, G over the G barre chord, and so on with the D/Dsus4 and A minor/Amadd9 chords. You could try breaking them up into arpeggios or use downstrokes and let them ring.

On the C major chord, join in on the barre chord or alternatively figure out the D/Dsus4 two frets lower (that means nearer the nut) to play C/Csus4. This is the kind of top part that Noel often adds, broadening out the sound and adding colour to the basic chords.

For a B section, we could add in the E minor chord, playing Em, D, Am, and then squashing C and D into the fourth bar, using the barre chords from figure 2. This is where the interesting stuff happens. Play this four-bar sequence two or four times and last time through leave out the C and D chords and go for the Fadd9 instead. This is the “wow” sound from outside the key and is built on the flattened seventh (F relative to the key of G), and the added ninth just makes it even better. 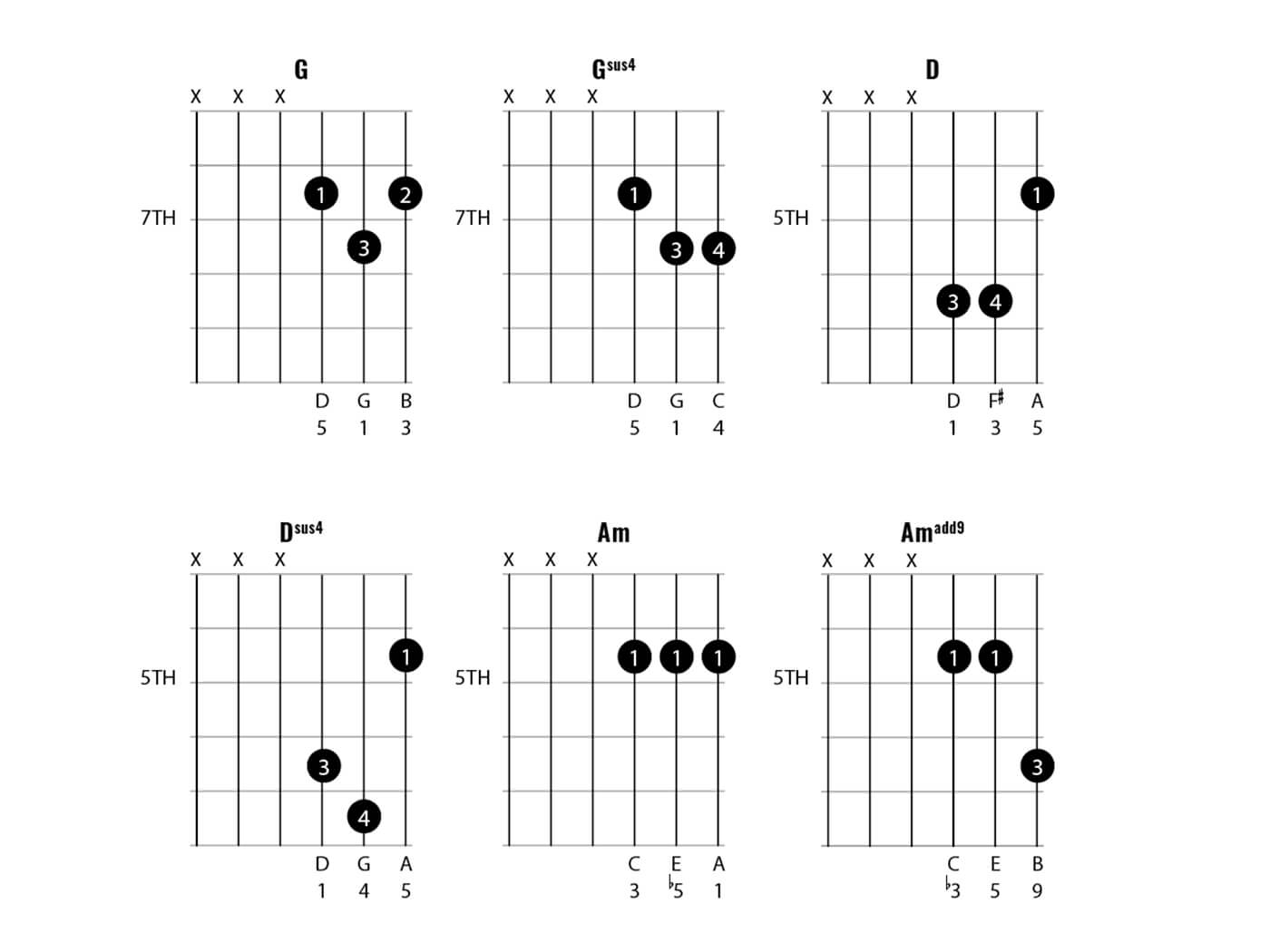 Here we again have an unusual chord (F#m11) played in a sequence with regular major chords. If you were to have whole sequences of minor 11ths or ninths (or major sevenths etc) you’d get something much jazzier. This may be why majors, minors, sus and added note chords dominate most rock music. Notice that the 7th and 11th are both open strings in this F#m11 voicing, adding extra crunch.

Try playing the minor 11th as an arpeggio. The A and B chords can fit into one bar, giving you a two-bar sequence. You could experiment with adding open strings to these two chords too, and with playing them as arpeggios, but be careful not to make it too pretty – that’s not Noel’s style.

Our final sequence mines a similar vein, this time starting with an A minor seven chord followed by two ‘thumb over’ chords, in which the fret hand thumb edges over the top of the neck and traps the E string at the first or third fret. If that’s tricky for you, other fingerings are available, such as the first finger on the sixth string and the other three fingers on strings two to four. You could also substitute six-string barre chords – though they will sound much heavier than you’d want for this kind of feel.

Rod Fogg is a long-established London-based guitar teacher, professional musician and writer. He is the author of The Ultimate Guitar Course (Race Point Publishing, 2014) and contributed to best-seller The Totally Interactive Guitar Bible (Jawbone Publishing, 2006). More from rodfogg.com.