In part two of our look at the chord shapes and sequences which define Paul Simon’s sound, we focus on his early years as a solo artist.

Paul Simon’s solo career began in 1970 with the breakup of his 14-year collaboration with Art Garfunkel. The early solo years were a purple patch for him, with the consecutive release of three successful studio albums. In 1986 after something of a career slump he bounced back with Graceland, which became his most successful solo album. Influenced by a variety of world music, it was number 1 in many countries, selling 12 million copies around the world.

As Simon’s solo career developed there were significant changes in the music he was writing. The chords he used became more extended, including ninth, augmented, seventh, ♭5 and major seventh chords. While many of these flavours are associated with jazz, Simon’s music never really became ‘jazzy’. Instead, he simply wrote pop music with an expanded chord palette.

Another area of development for Simon was the use of longer chord sequences, often eight bars or more without repeated sections, chord following chord before finally returning back to the top or moving on to a bridge, which would sometimes be in a completely unrelated key.

One more novel aspect to songs from this period is the occasional use of keyboard rather than Simon’s mainstay acoustic guitar to outline the chords of the song. As we will see this can make some of these sequences tricky to play on guitar. 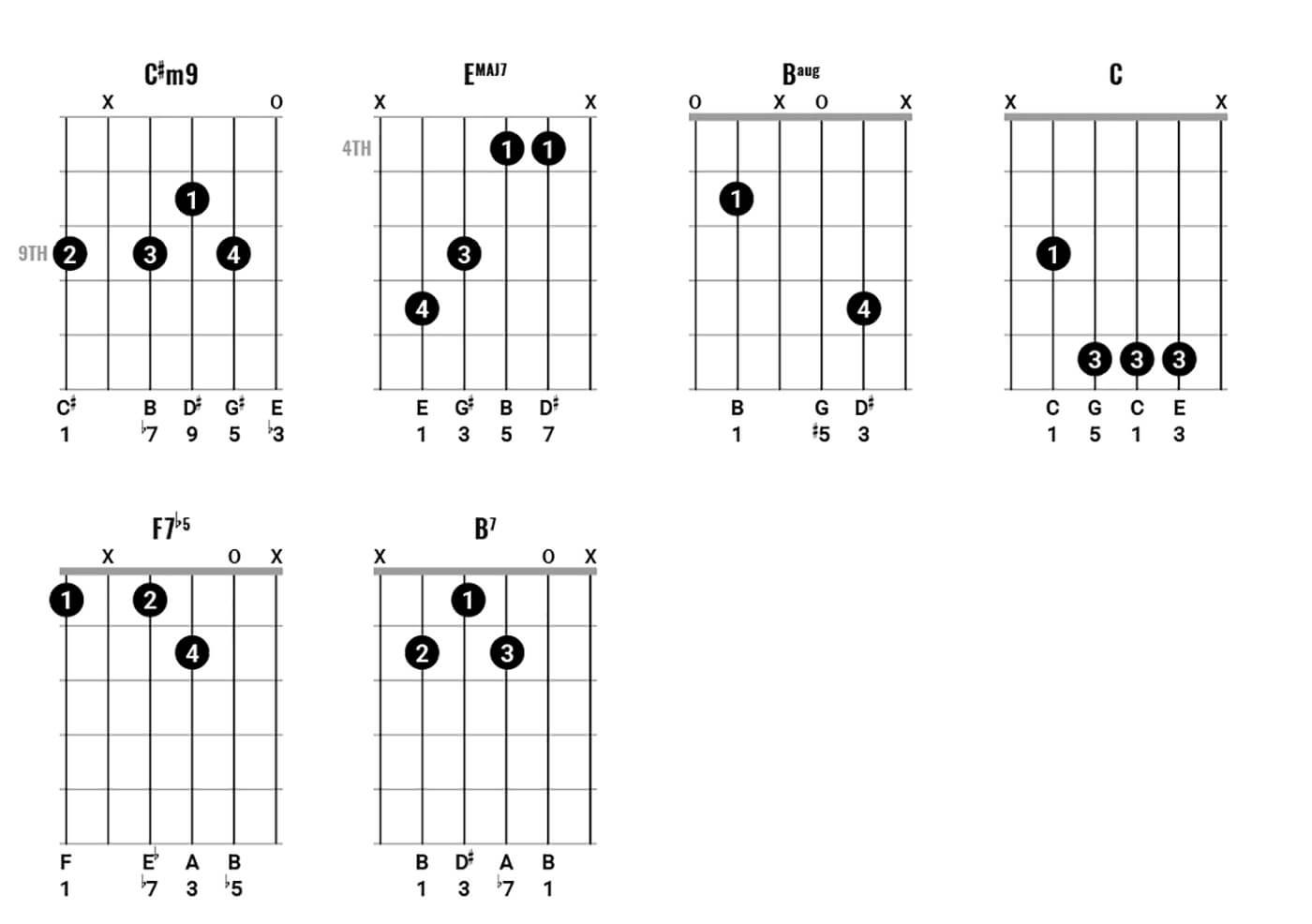 In at the deep end we kick off with a chord sequence inspired by a keyboard intro. You will need to put your pick down and fingerpick this one. It includes some surprising ‘outside’ chords such as C and F7♭5, which are far away from the E major/C♯m tonality the passage begins with. Just for added interest, try playing it in a waltz-like three time. If you feel short-changed at the end because it is not an eight-bar sequence, don’t worry; at this stage in his career Paul Simon wrote like that.

Here we have a sequence which makes a four-bar loop, with a jazzy blues flavour. Bm7♭5 contains all the notes of G9 except the root, so in the context where it’s following G7, it functions as a G9 chord. Stick with fingerstyle for this example, playing the bass note first and then adding the upper notes as a chord or arpeggio.

Once again we are in extended chord territory, with a major seventh chord, a slash chord and a diminished seventh, written here as o7 instead of the optional dim7. Separate out the bass note on this example too. If it seems inconclusive as a four-bar sequence, try adding G, C and then G again. Experiment with the shapes we have used so far, major, seventh or major seventh, and see which ones work for you. 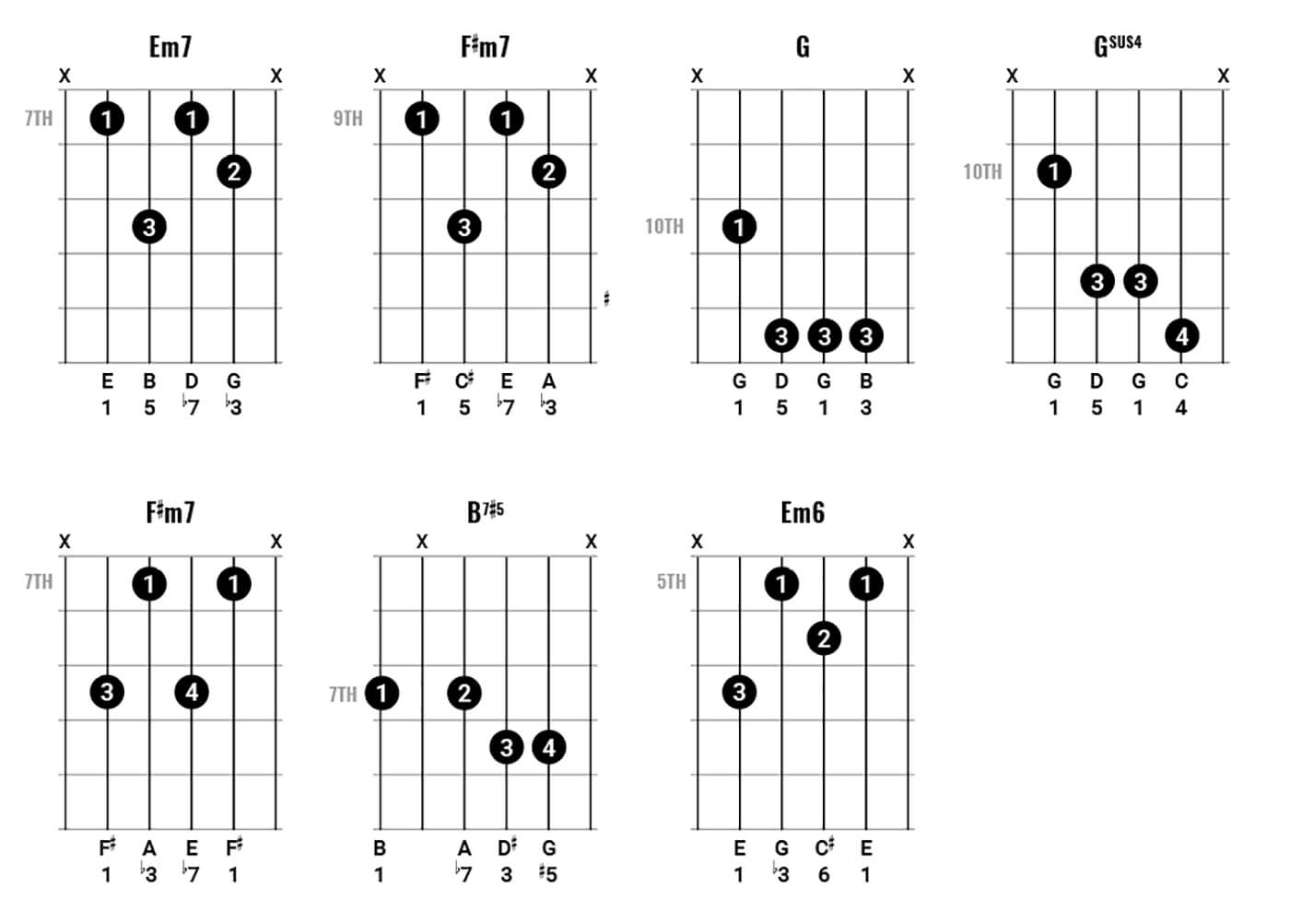 Here we are inspired by a guitar intro in the key of E minor, suggesting a slightly darker mood. Give the chords a bar each, and with two bars on the last chord you should be able to make an eight-bar sequence. With two different voicings of F♯m7, a B7♯5 and E minor sixth as well it’s a great way of seeing how these colourful chord voicings can be put together to make a meaningful musical statement.