How to play Killers-style chords

The Killers are one of the biggest rock bands of the 21st century and guitarist Dave Keuning is a founder member. In this Chord Clinic we take a look at his guitar style and chord choices.

The first four chords in Figure 1 make a four-bar sequence which you can loop around. Start by holding each chord for four beats, letting them ring, and then gradually loosen up into a chugging downstroke rhythm. Notice the distinctive minor seventh chord – these are by no means commonplace in rock music. Also there is an unusual voicing of Asus4, which doubles the suspended fourth strengthening the resolution when we arrive on A major. 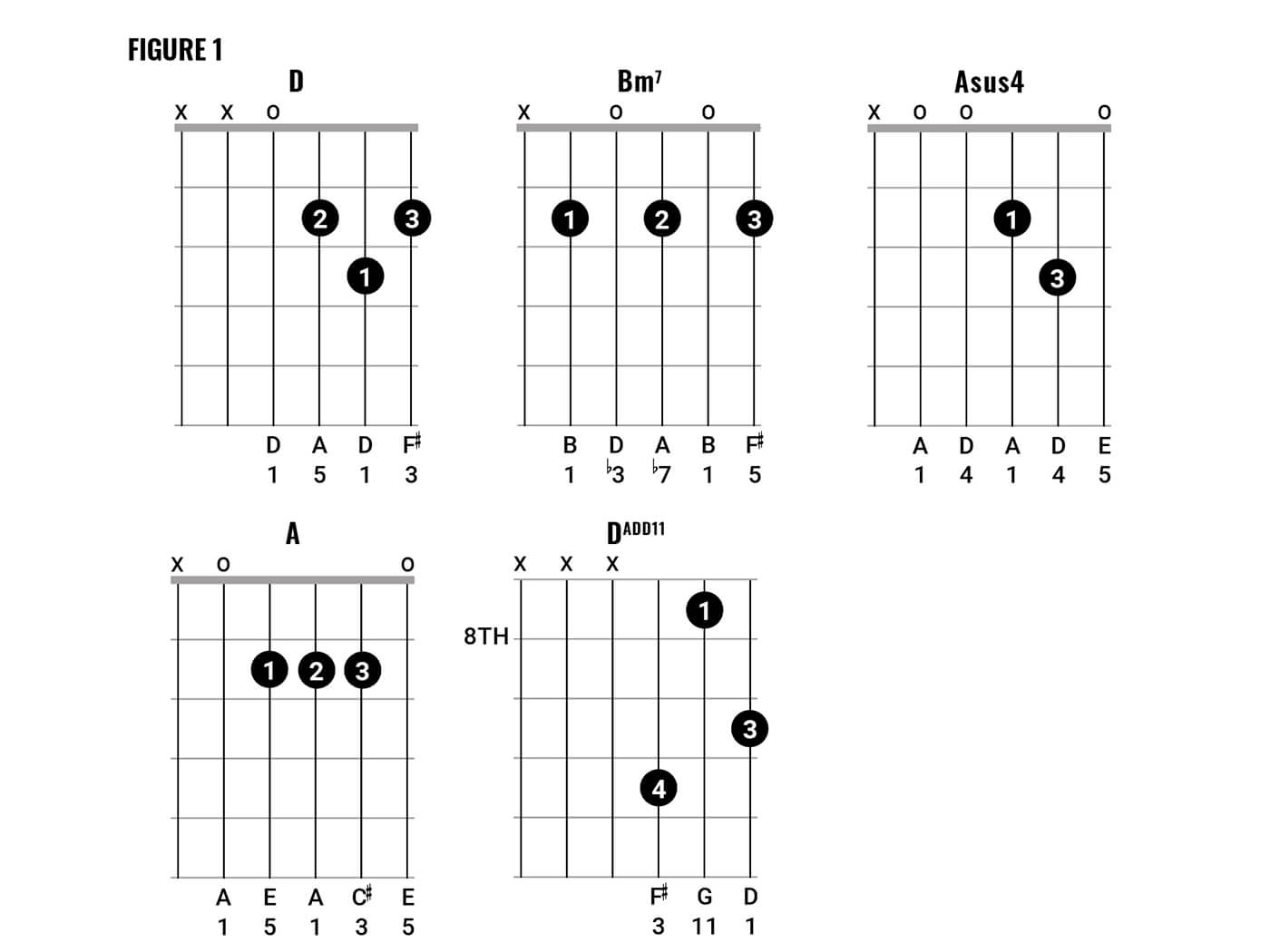 The fifth chord in the example we’ve called Dadd11, but in reality the name would change with each chord, as the idea is that you play it as an arpeggio over each of the four chords above. There’s no need to be particularly busy, just play three or four notes as each chord changes. If your ears tell you there is a need for resolution when you reach the A major chord try ending on the ninth fret of the G string instead of the 11th fret. Repeating the same riff over a moving chord sequence is a Keuning trademark.

The first three chords in Figure 2 will give you another four-bar sequence if you play the A chord for two bars. You might have spotted that this is the unremarkable chord IV, I, and V in the key of D major, and that the voicings are also fairly commonplace. We are going to play this four-bar sequence three times, which takes us to the interesting bit. Third time through, only play half a bar of A major, followed by F#/A# and B Minor. Then to round things off play a couple of bars of G and A and you should have a 16-bar sequence. 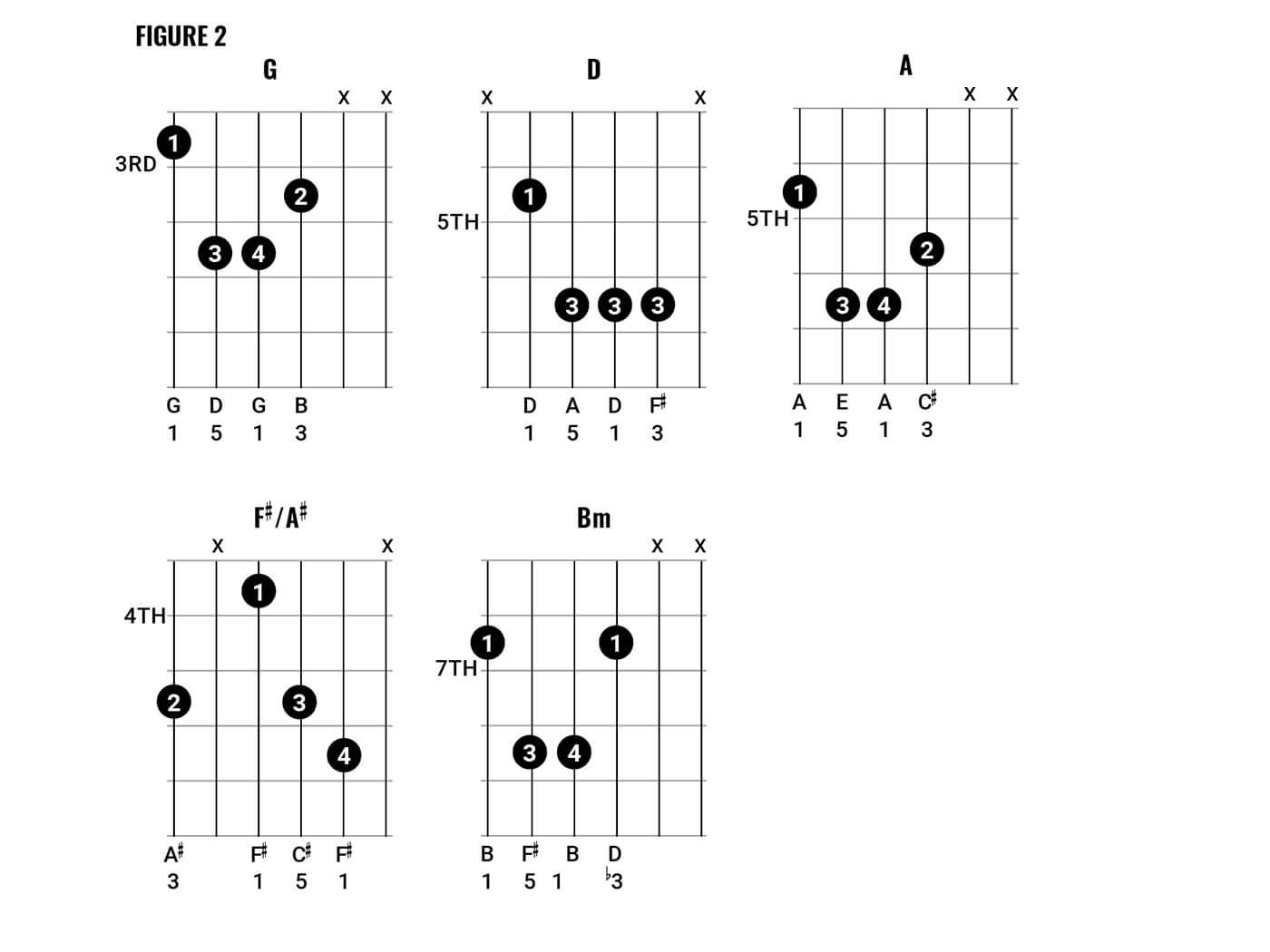 Here at Chord Clinic we like this because it shows the way that Keuning and co can begin with a very conventional chord sequence and add an interesting twist, taking it to a whole new level. Having the A# in the bass makes the F# major chord seem to push more strongly towards the B minor chord. As an experiment, try playing a root position F# chord instead, or leave it out altogether and go straight to B minor from A. Which do you like most?

Figure 3 is intended to be played over Figure 2, using a fizzy distortion sound and eight down strokes to the bar. Layering high two or three-note voicings over a guitar playing thick meaty chords is another part of Keuning’s style and supplies some of the breadth and power you can hear on a typical Killers track. 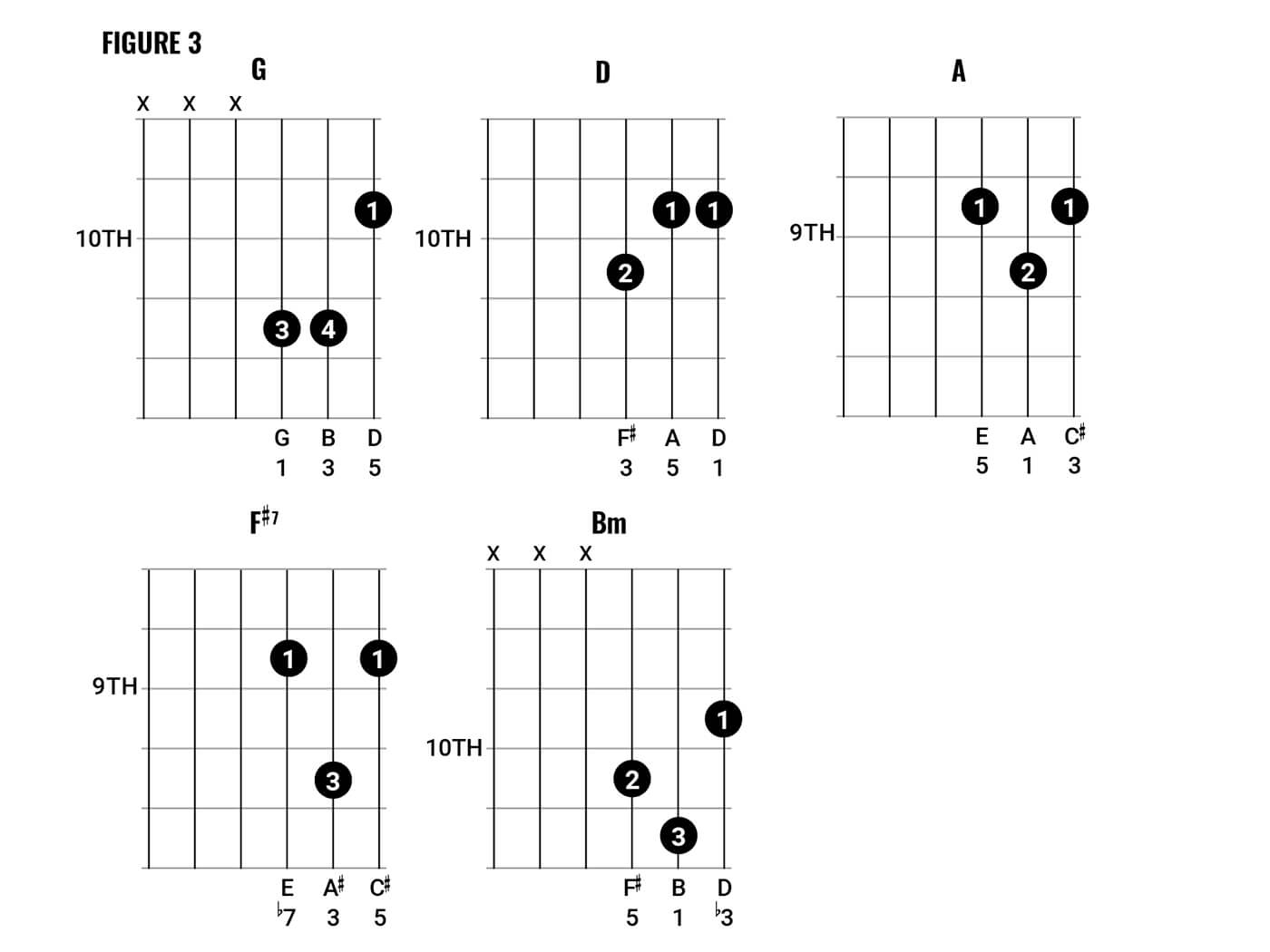 Figure 4 is all about arpeggios, with some unusual high voicings and an open string mixed in for good measure. The easiest way to explain it is to think about two separate groups of four notes. The first four notes are on the fifth, fourth and third strings. Then there’s a second four-note arpeggio starting on the top string and ending on the D string, dragging the pick across the guitar in a series of upstrokes. If you play the pattern twice on the third chord you’ll get a four-bar sequence. 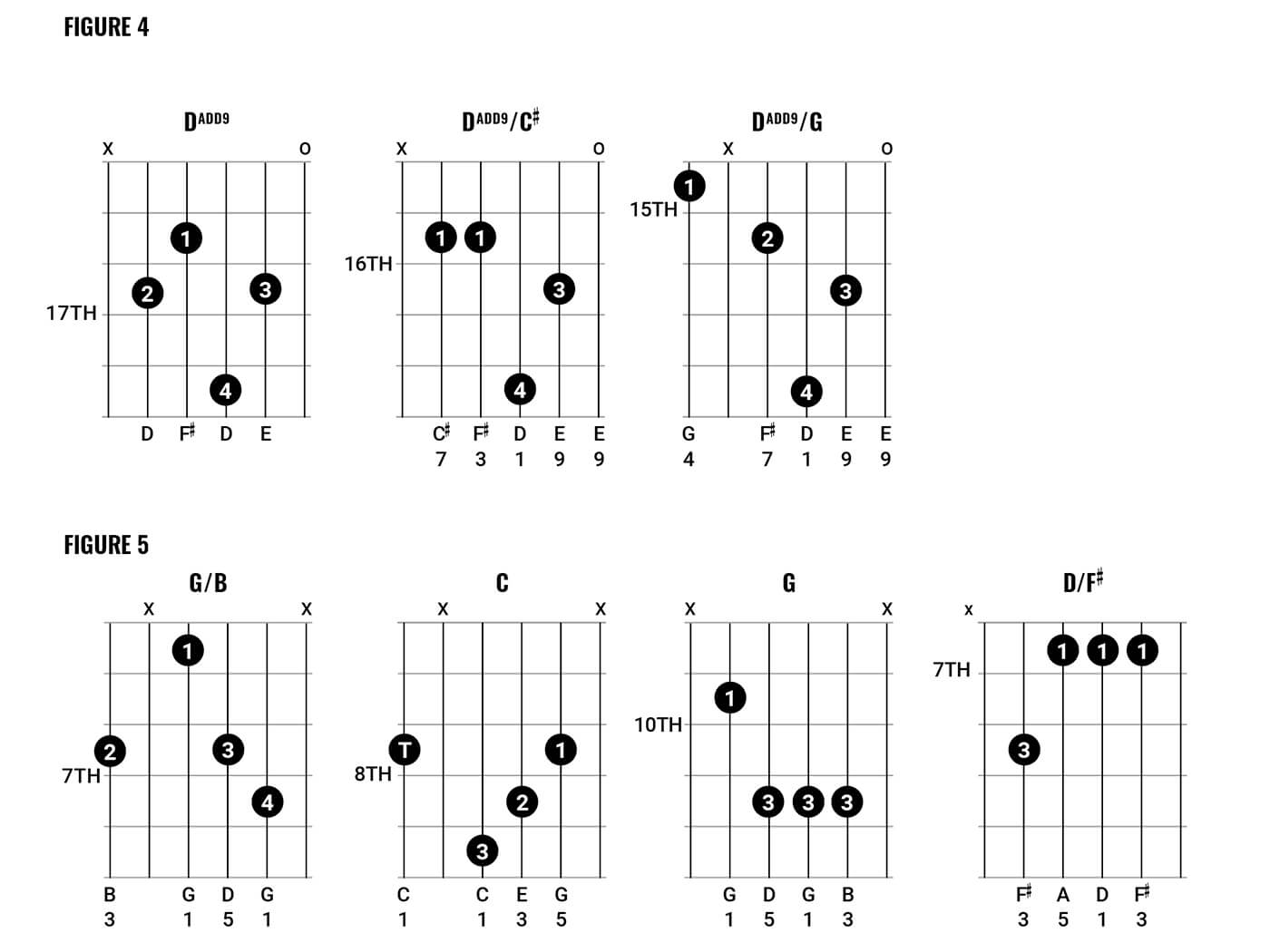 You could try playing these arpeggios fingerstyle, which would be easier as the idea is to go quite fast. Tricky though it may be the musical effect is probably better if you use your pick. We’ve chosen to describe these as the same chord but with a different bass note. That certainly works for the chord with the C# in the bass, but it would be just as possible to describe the third chord as some kind of G major chord; G major 13 (no third) being an option.

Figure 5 is another repeatable four-chord sequence inspired by the chorus of a Killers song. Both the G/B and the D/F# slash chords are first inversions. That is to say that the third of the chord is the bass note instead of the more usual root note. We saw the same thing in Figure 2 with F#/A#.

The B in the bass of the G chord seems to push upwards a semitone to arrive on the root note of the C chord. The F sharp in the bass of the D chord, however, jumps to the B bass note at the beginning of the sequence when repeating. This shows that you can choose slash chords both for their harmonic function and because they sound good in context. Bear them in mind if you are making up your own chord sequences…