Including a refreshed take on the Jet Baritone and the Penguin. 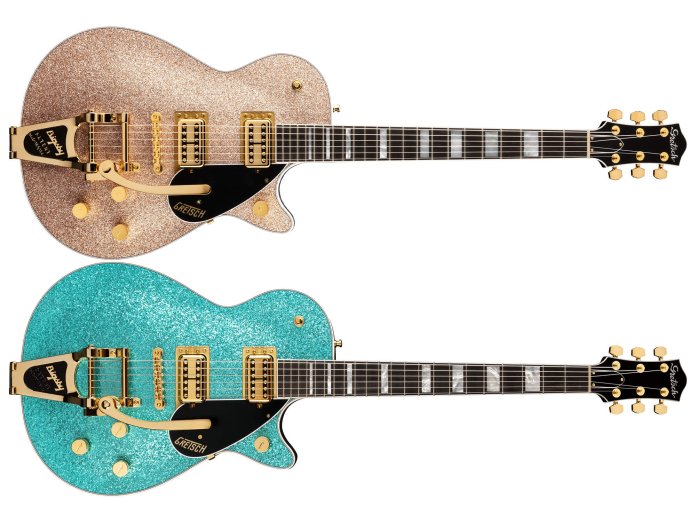 Following on from similar huge launches from Fender, Squier and Jackson, Gretsch has launched a set of new guitars for 2022. 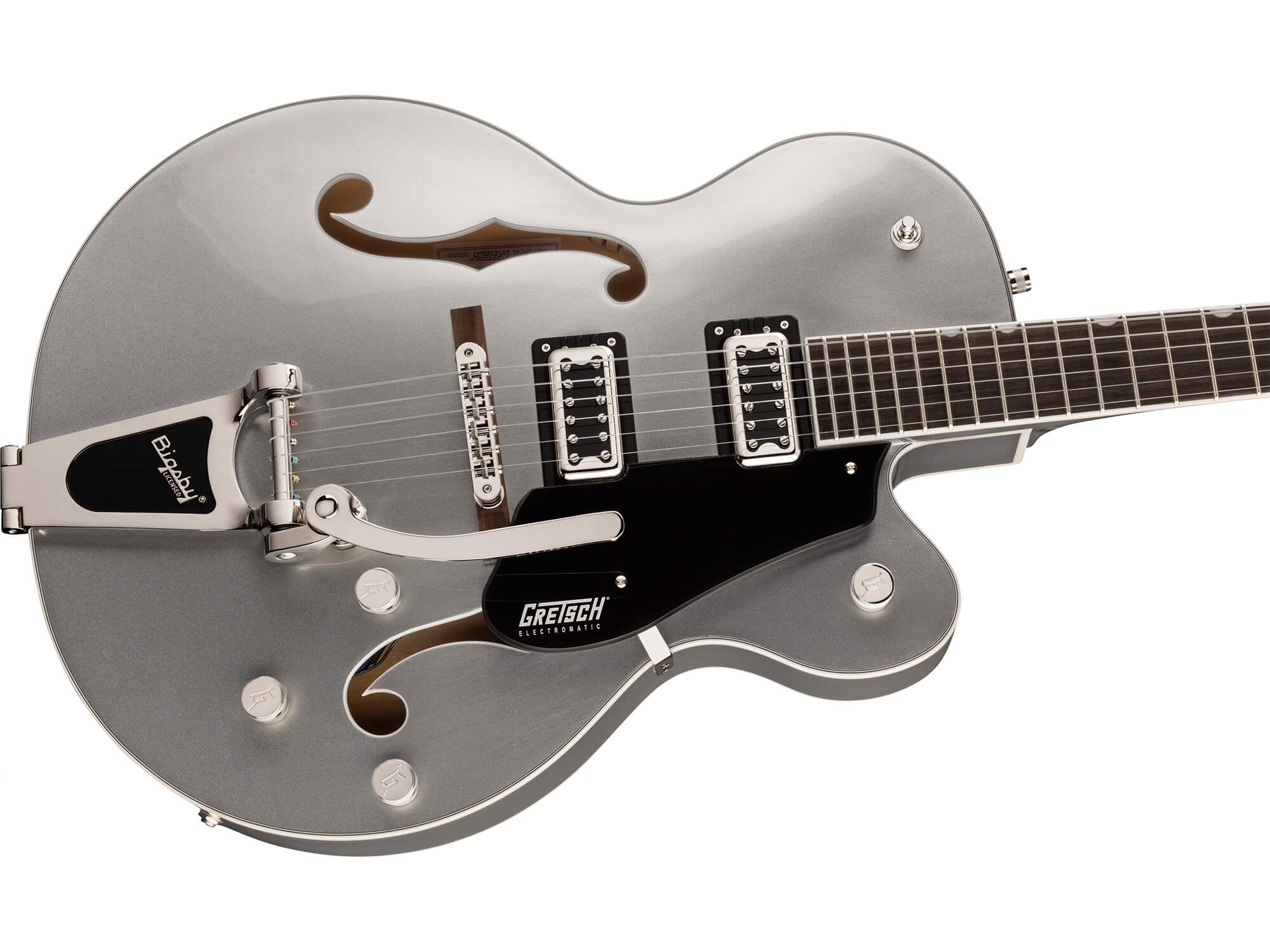 This guitar has a vintage look, but a few contemporary construction points.There’s a newly-designed trestle-block bracing design, which, according to Gretsch, increases the rigidity between the body’s top and back, giving it “a faster attack with more focus, snap and increased sustain.” 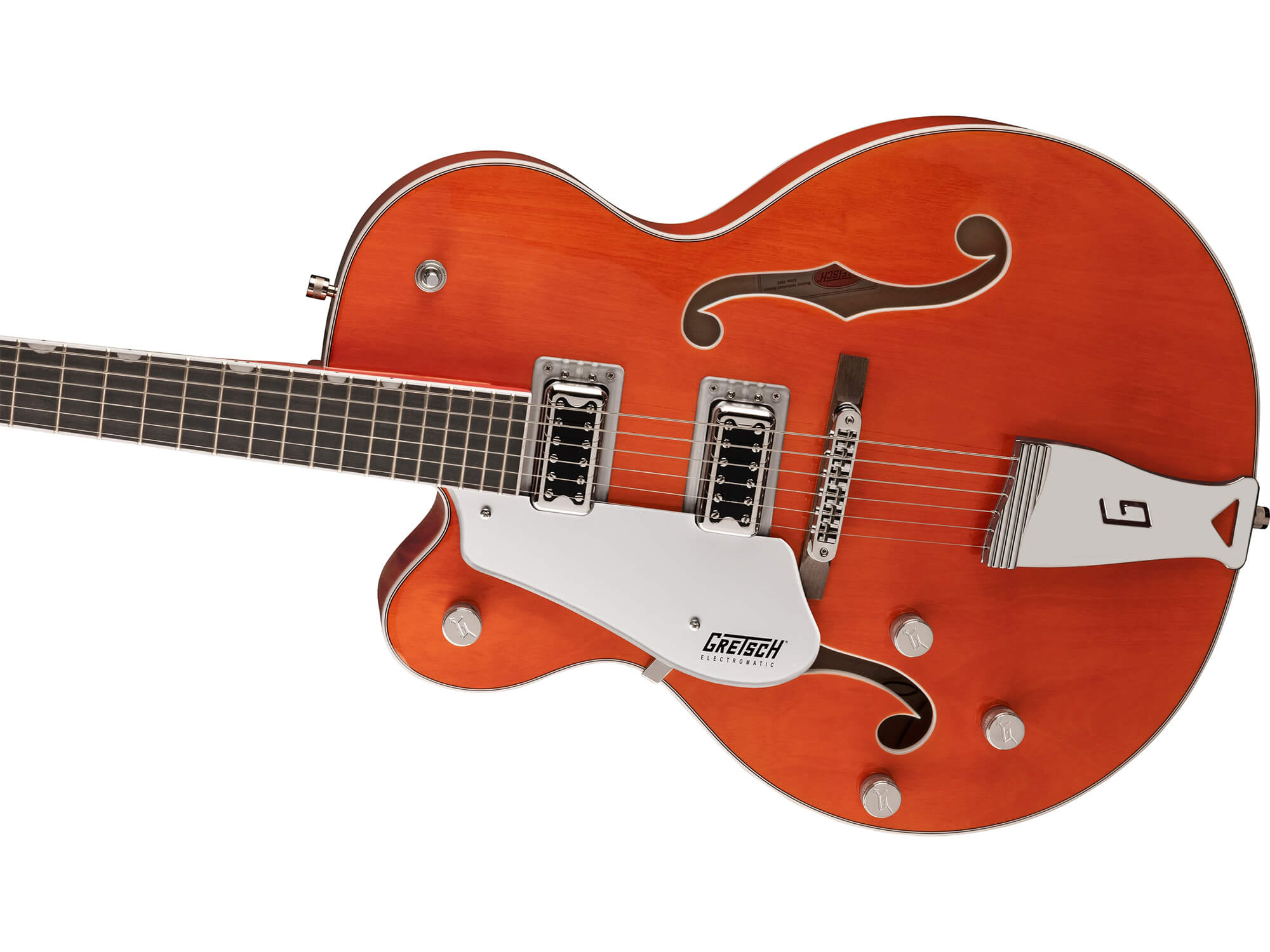 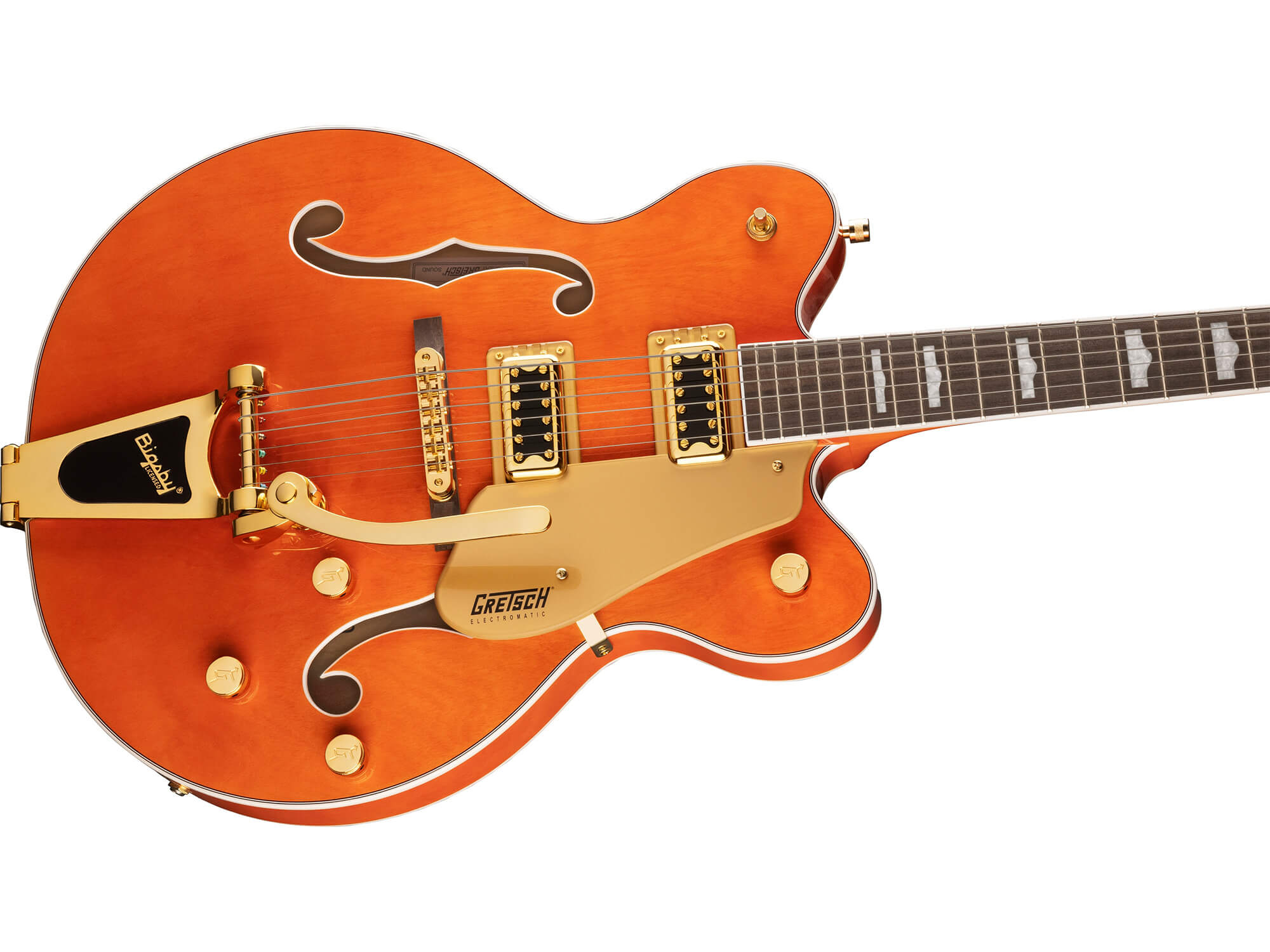 This guitar is the double-cut version of the above. The specifications are the same except for the gold hardware. This version comes with a Bigsby and is finished in Snowcrest White, Walnut Stain or Orange stain. Lists for $899.99 / £1,039 / €1,199 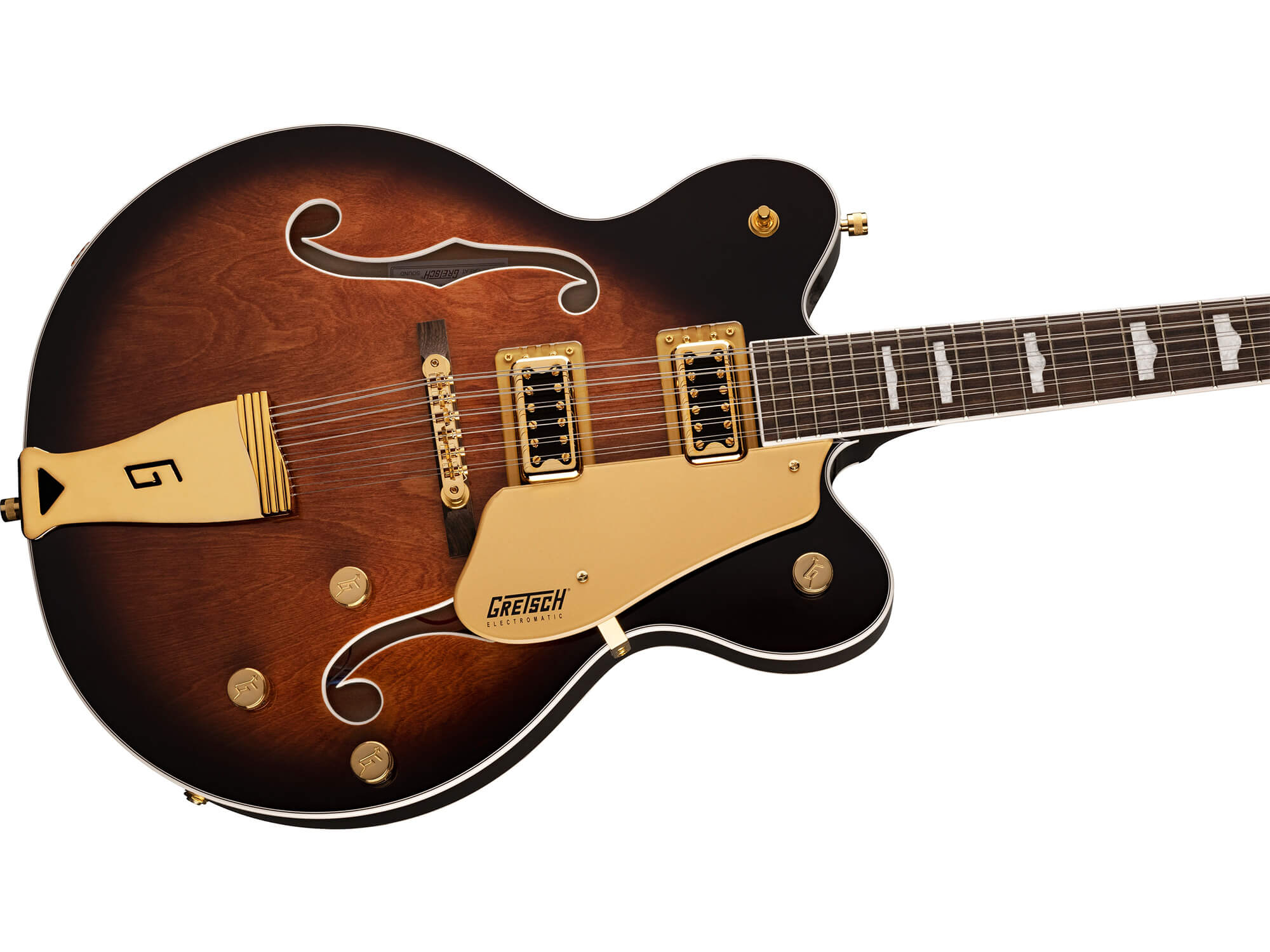 This 12-string version of the Electromatic Classic Hollow Body double Cut comes with gold hardware, and a hardtail bridge. It’s available in either Walnut stain or Single Barrel Burst. 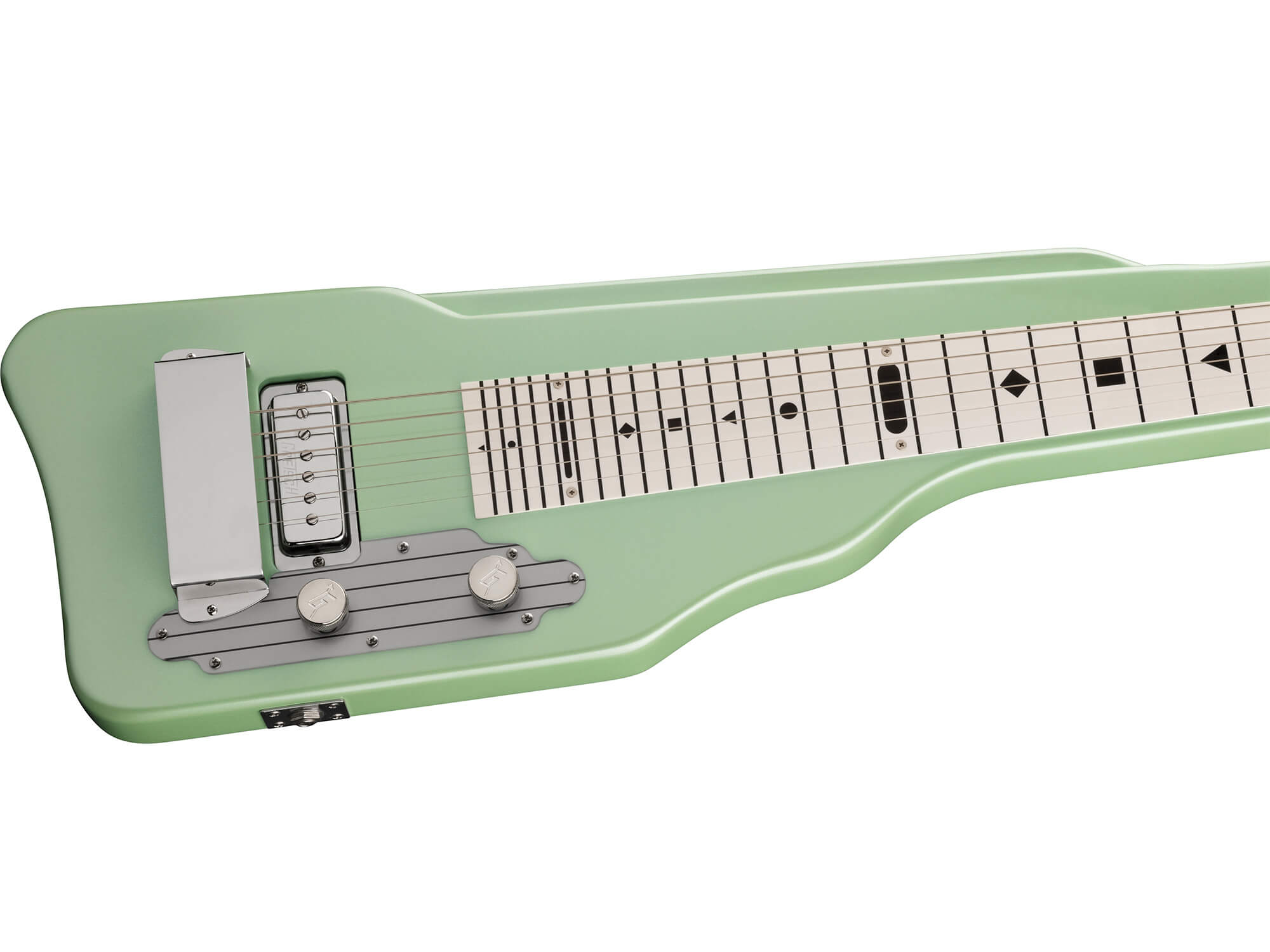 This Lap Steel is built with a mahogany slab body, a 22.5-inch scale. The plastic fingerboard features circle, triangle square and diamond position markers. Electronics consist of a single chrome-covered single-coil bridge pickup, controlled by a master volume and tone. It comes finished in either Broadway Jade, Tahiti Red or vintage white. 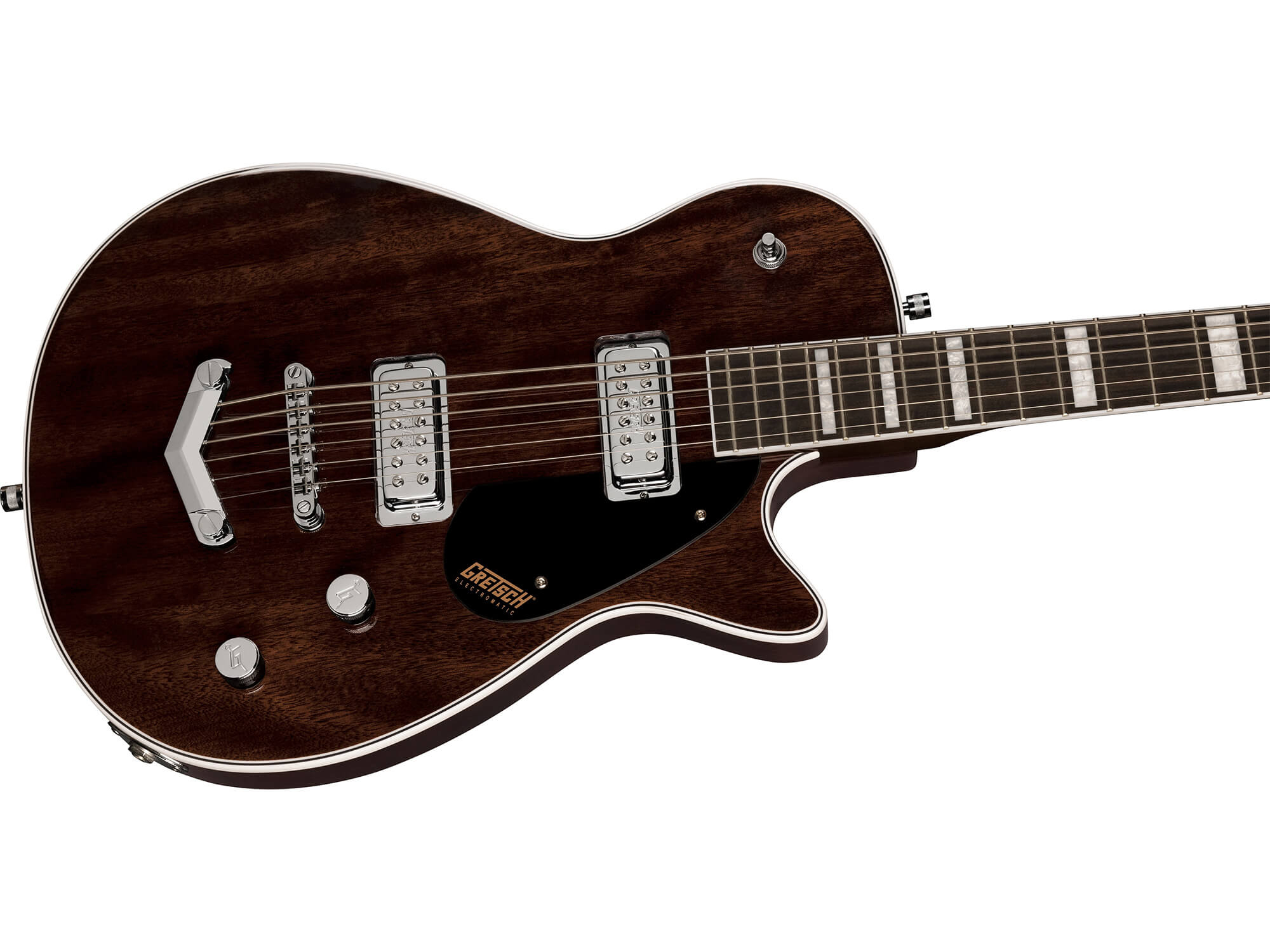 This latest version of the Jet Baritone features a 29.75-inch scale length, and a pair of Gretsch mini-humbuckers. The bolt-on maple neck is home to a 12-inch radius laurel fretboard, with 22 medium-jumbo frets. 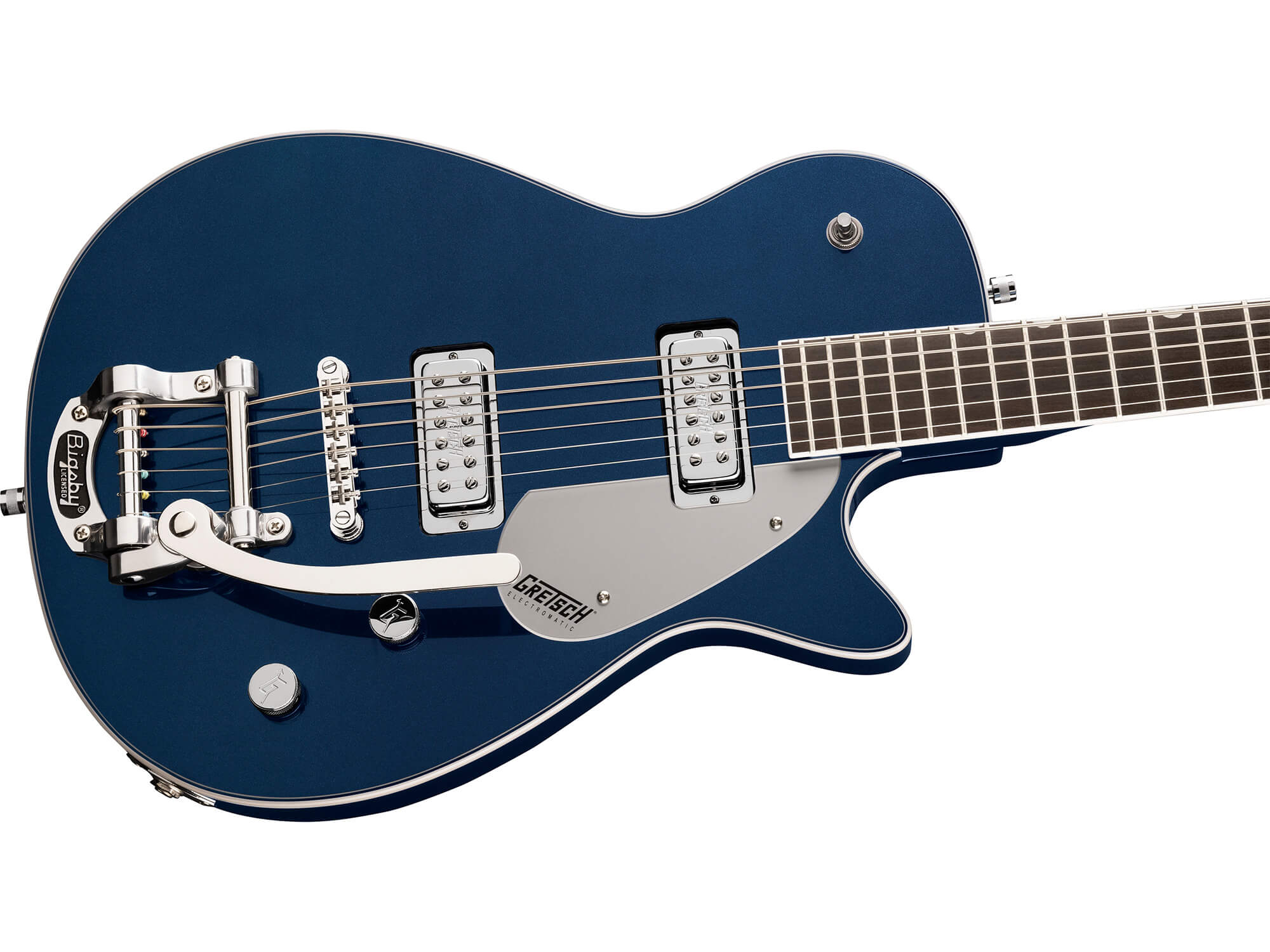 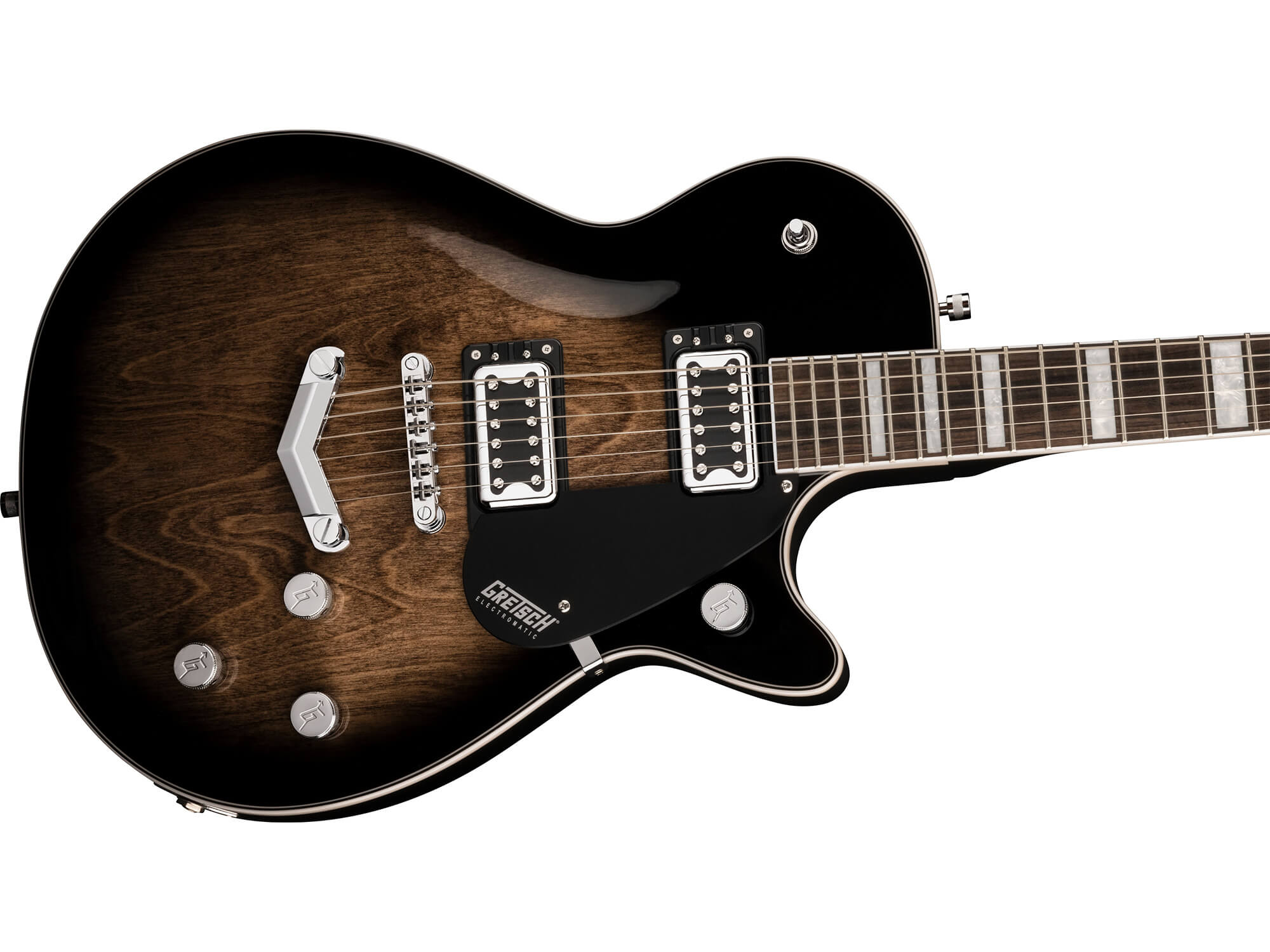 This single-cut model features a chambered mahogany body, with a maple top for a balance of punch and brightness. The 12-inch-radius laurel fretboard features full-width inlays and 22 medium-jumbo frets. There’s a V-stoptail andtwo Broad’Tron humbuckers, which give a more aggressive sound when compared to Filter’Trons. 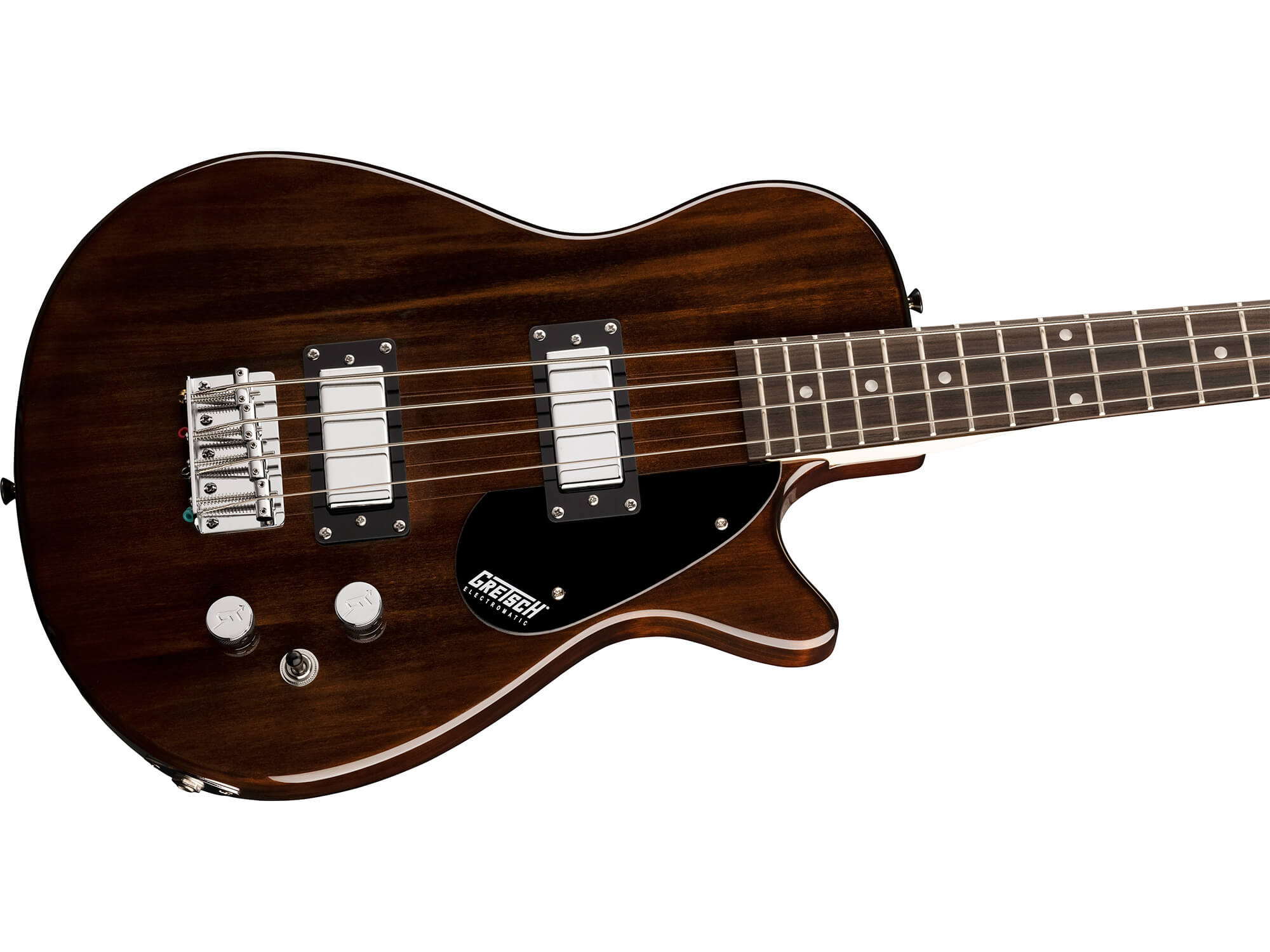 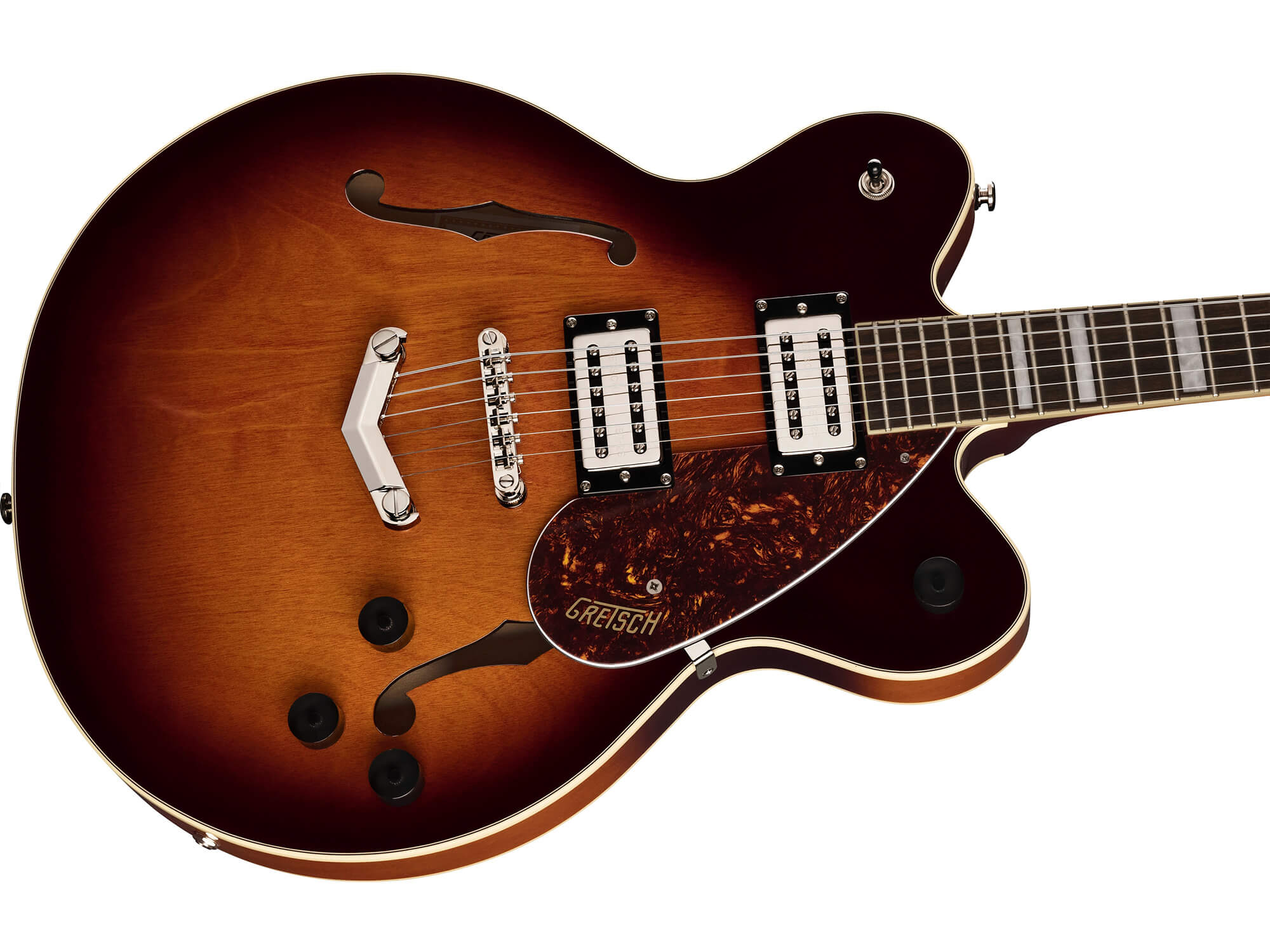 This semi-hollow electric is fitted with two newly-designed Broad’Tron BT-2S humbuckers. Its 16-inch arched maple body has a chambered spruce centre-block. The nato neck is topped with a 12-inch radius laurel fretboard with full-width block inlays and 22 medium jumbo frets. Finished in either Forge Glow Maple or Midnight Sapphire 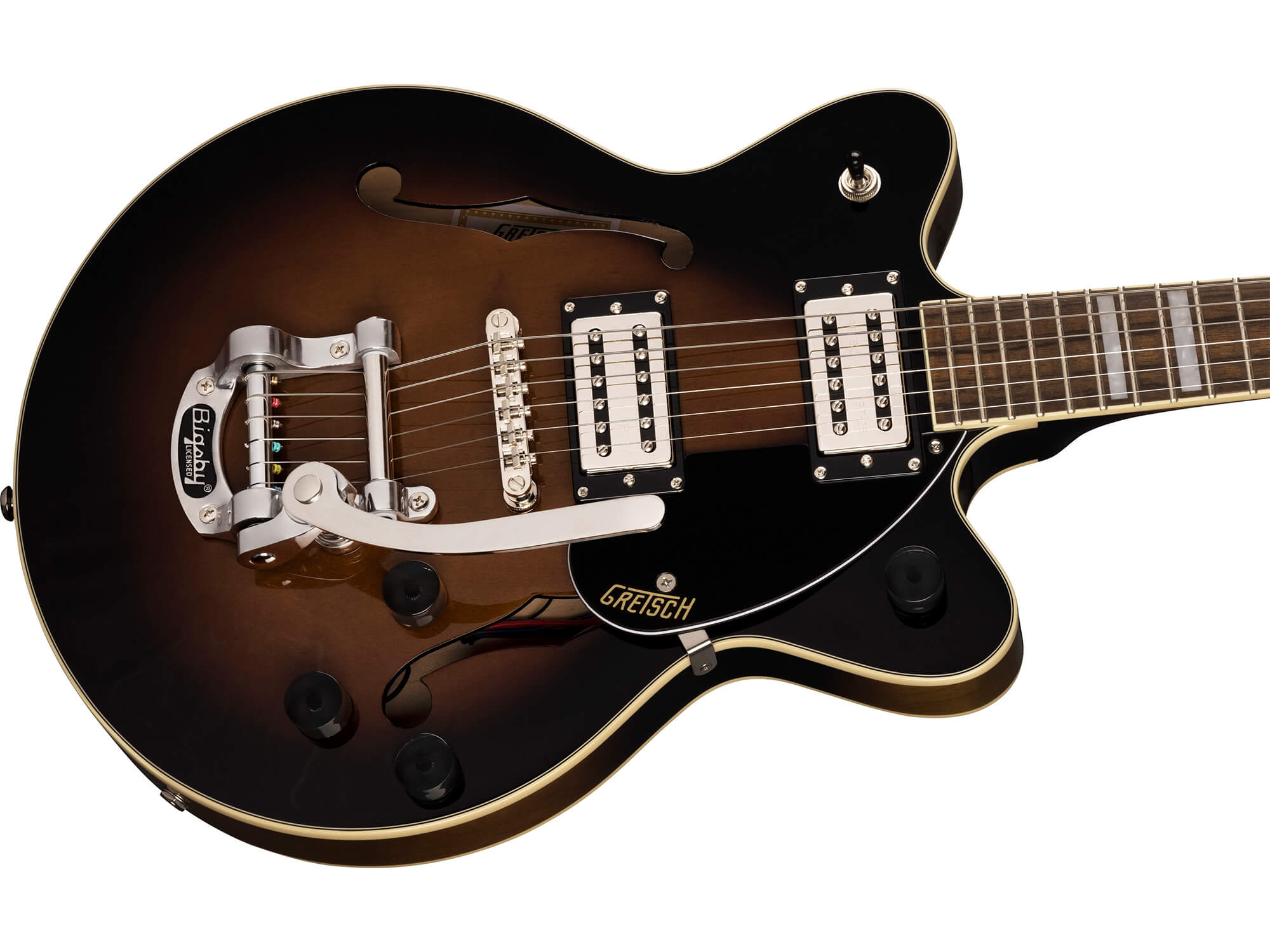 The core specifications of this guitar remain the same as the G2622, however here there is a Bigsby instead of a V stoptail, and there’s a smaller 14-inch double-cutaway body. It Comes finished in either Brownstone Maple, Stirling Green, or Walnut Stain. 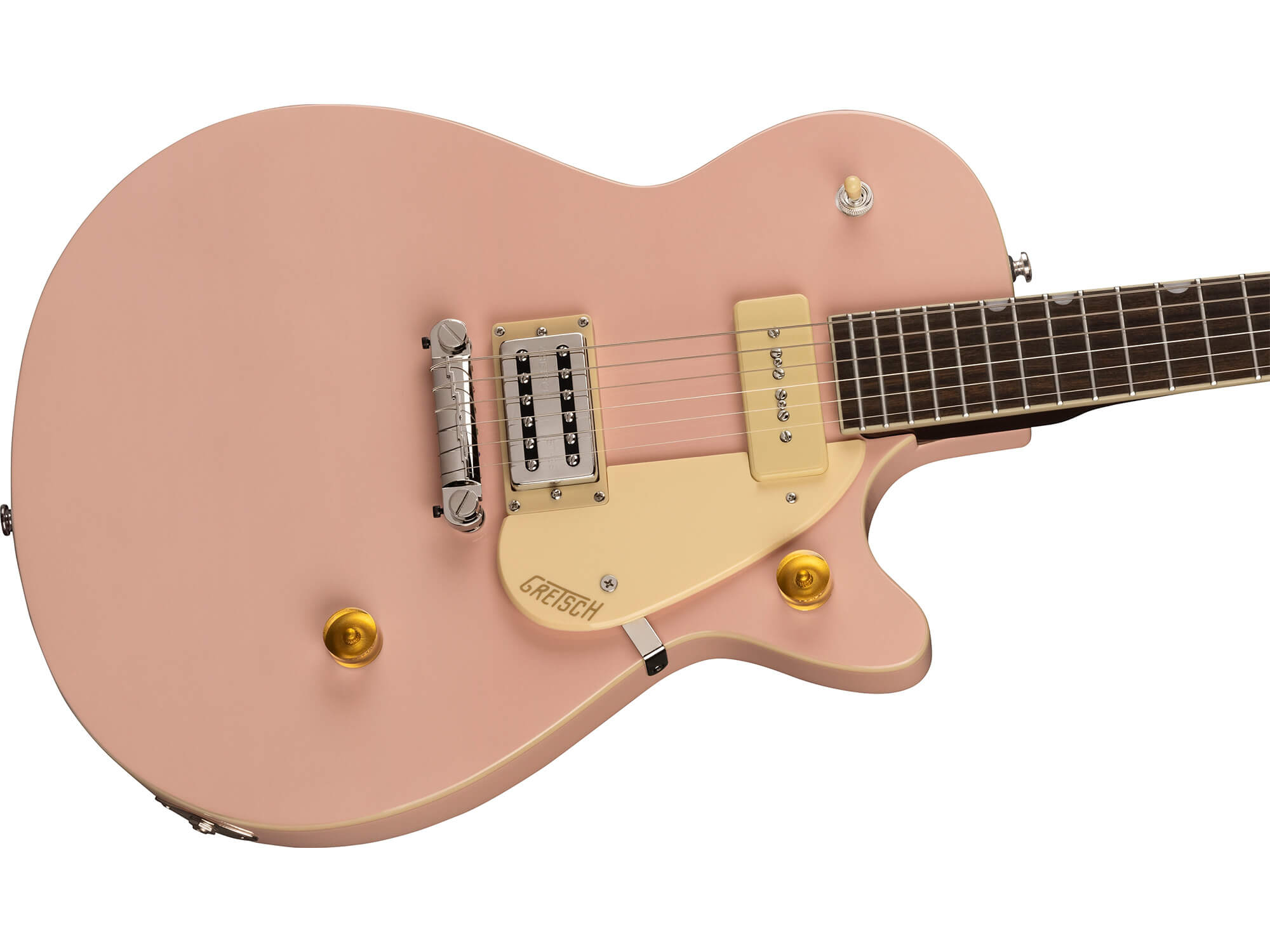 This guitar features a Broad’Tron BT-2S humbucker in the bridge, as well as a soapbar P90 in the neck position. Its bound nato body is joined with a mahogany neck and a chrome compensated wraparound hardtail. 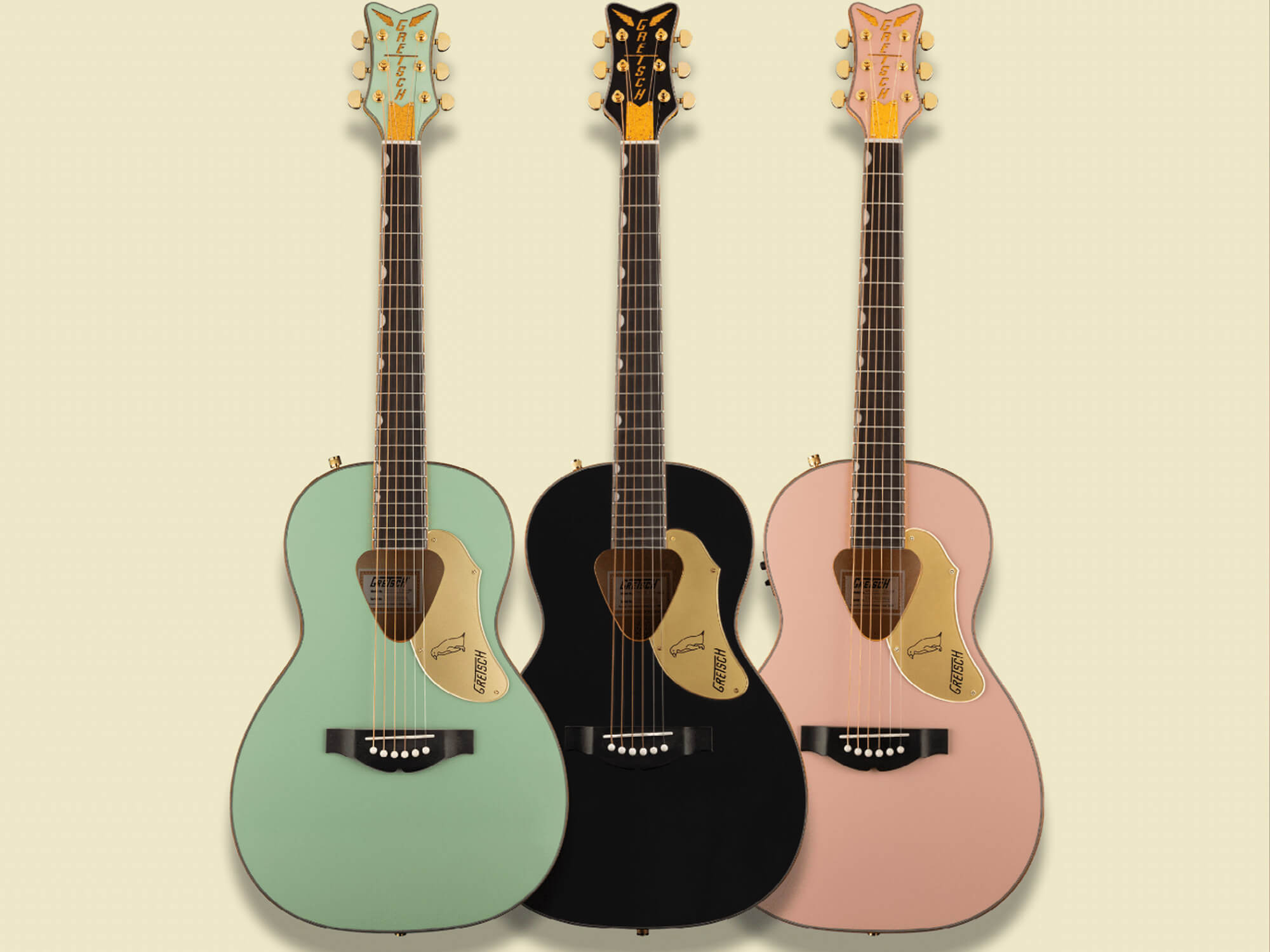 This take on the Rancher Penguin Parlor guitar features a solid spruce top, maple back and sides, a mahogany neck, and a 12-inch radius 20-fret laurel fingerboard. It’s loaded with a Fishman Presys III pickup/preamp system for amplification. It comes in either Black, Mint Metallic or Shell Pink. 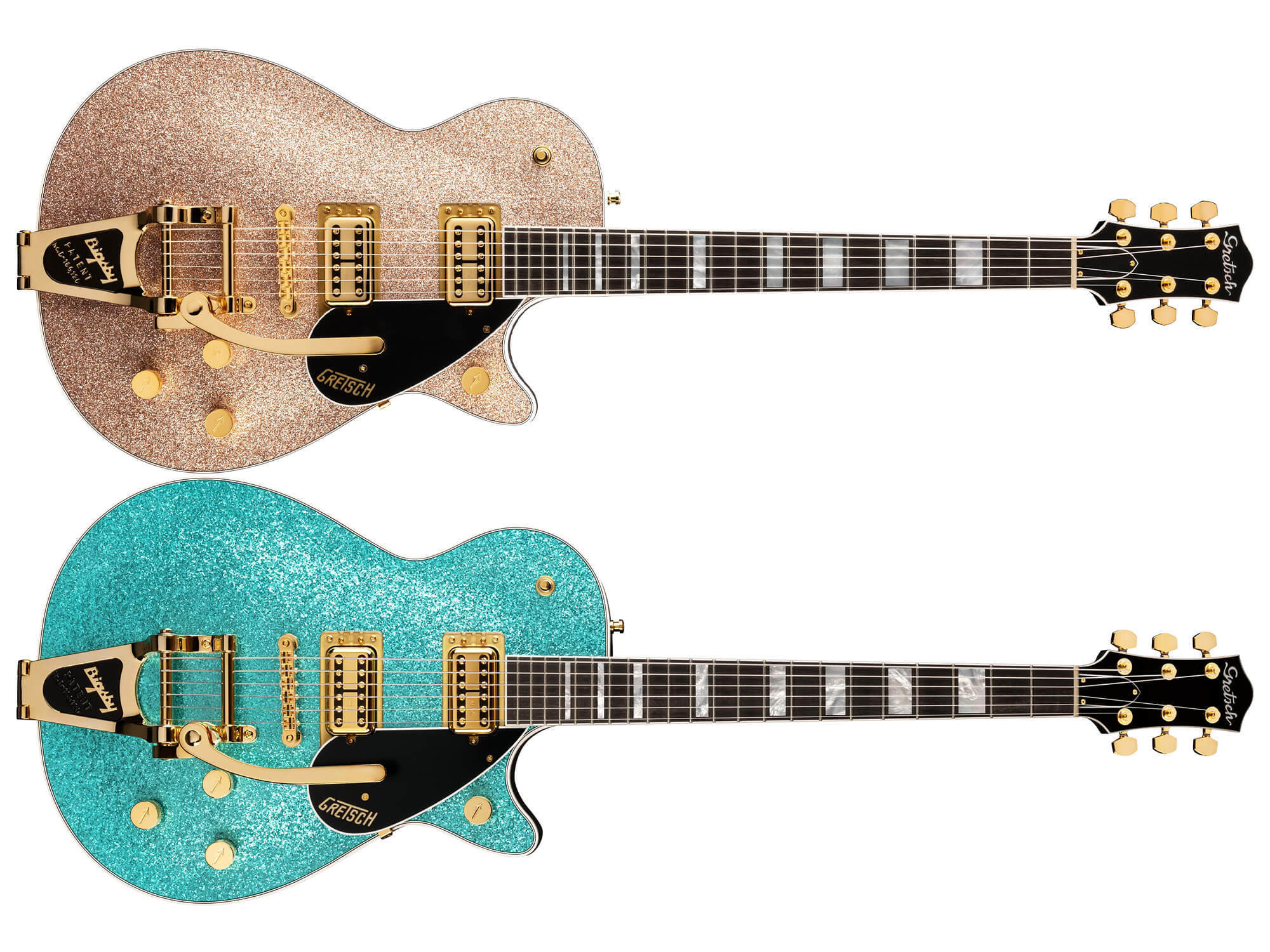 This limited-edition instrument features a chambered mahogany body, a maple top and a pair of the revered Tim Shaw-designed BT65 Gretsch Broad’Trons. The fully-gold hardware includes a Bigsby vibrato. Comes finished in either Champagne Sparkle or Ocean Turquoise Sparkle.