The Veronicas’ bassist Camilla Charlesworth was one of many users who chimed in on the post.

A now-deleted social media post by Fender has been branded “misogynistic” and “inappropriate” for taking a sexualised view of Brazilian women.

Earlier today (26 February), the guitar giant shared a post originally made by Fender Custom Shop masterbuilder Dennis Galuszka in January. It pictured two Jazzmasters with Brazilian rosewood necks, along with the caption: “A pair of Brazilians. Ready to hang on your neck or sit on your knee. They honestly play and sound amazing.”

Fender reposted Galuszka’s image and caption onto the brand’s official Instagram page today (26 February), and was met with criticism from a few users. The company has since taken down the post.

“As a Brazilian woman the caption seems a bit off to me,” wrote one user. Another added, “I love @Fender but not this misogynistic caption.”

Another user noted, “The attempted subtlety of the innuendo suggests that you know the inappropriateness of the comment, but you just can’t help yourselves. That makes it all the worse.”

The post also drew the attention of Camilla Charlesworth, bassist for The Veronicas, who commented: “Great guitars as always Fender. Feeling like the caption is unnecessary though. Feel me?” 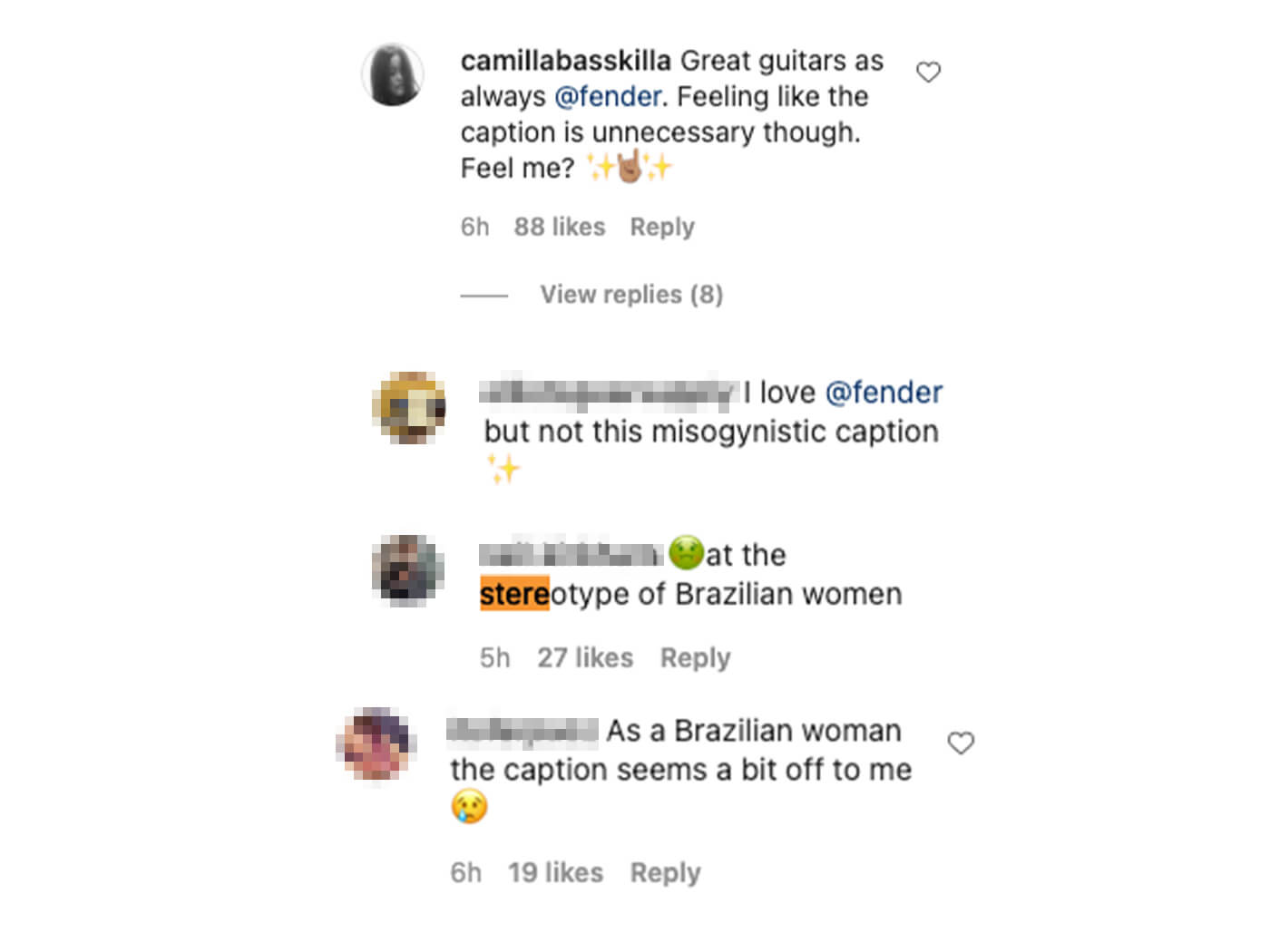 When asked by another user to explain why she considered the post “exclusionary”, Charlesworth explained through a series of Instagram Stories: “It’s more so weird and creepy.”

“Like, you’re referring to instruments as Brazilian women who are ready to hang off your neck and sit on your knee. Like women, Brazilians, people in general, don’t want to be spoken about in that way and it definitely is hinting [at] the idea that, people of colour or like women of colour are submissive and exotic and sexualised.”

Guitar.com has reached out to Fender and Charlesworth for further comment.

This isn’t the first time the guitar giant has faced backlash for comments made by one of its Masterbuilders. Back in June 2020, when luthier John Cruz was dismissed from the Fender Custom Shop, many speculated it was due to a controversial Facebook post that Cruz had allegedly made about the Black Lives Matter protests that were taking place across the US at the time. Fender, however, did not provide a reason for his dismissal.