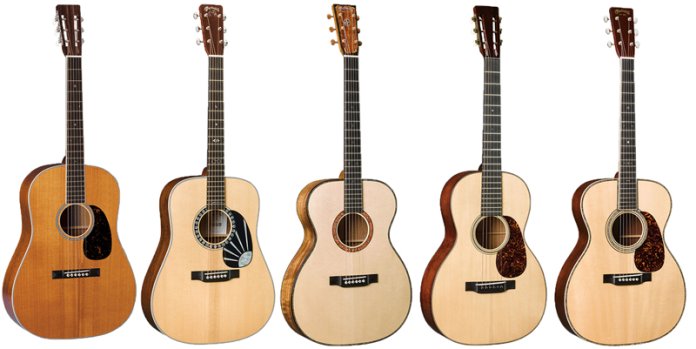 Martin Guitar has announced two new limited-edition guitars for Winter NAMM 2016 to celebrate the 100th anniversary of the Martin Dreadnought. The company also unveiled new additions to its Custom Shop and Authentic ranges.

Martin Guitar will be celebrating the 100th anniversary of their iconic Dreadnought model (1916-2016), known worldwide as the most copied body size in the world. To launch the year-long celebration, Martin Guitar will unveil two distinctive limited edition models during the 2016 Winter NAMM Trade show in Anaheim, CA: the D-222 Anniversary Edition and D-28 John Lennon 75th Anniversary Edition. The two limited edition models pay homage to the highly influential instrument which shaped the sound of American music.

Martin Guitar will also be showcasing two beautiful new models in its successful Authentic Series, the 000-42 Authentic 1939 and the 00-18 Authentic 1931, as well as a stunning new limited edition Custom Shop model, the CS-OM True North-16.

D-222 Anniversary Edition: The very first Dreadnought guitars were designed and crafted by C. F. Martin & Co. in 1916, but marketed in Boston and New York exclusively under the Oliver Ditson brand. After Ditson went out of business in the early 1930s, Martin introduced the D-1 and D-2 Dreadnoughts for standard playing style that would soon become Martin’s iconic D-18 and D-28 models. Over the past 100 years, the Martin Dreadnought has defined what an acoustic guitar can and should be, and subsequently, it has become the most popular acoustic guitar design in the world.

Limited to only 100 fine instruments, the D-222 commemorates the 100th Anniversary of the Dreadnought (1916-2016). A 12-fret Dreadnought crafted from a Sitka spruce top with Vintage Tone System, mahogany back and sides, grained ivoroid binding, slotted headstock, and an ebony fingerboard and bridge, this guitar will be a cherished instrument for years to come (£3099)

“This guitar celebrates John’s life and songwriting. May it inspire all who play it to carry the torch of peace and light that John embraced through his own life and music.” ~ Yoko Ono

To commemorate John Lennon’s 75th Birthday, this model is limited to only 75 instruments. This amazing Dreadnought will be highly sought after for many years and is sure to be a wonderful addition to any guitar enthusiast’s collection. A solid Adirondack spruce top with Vintage Tone System is combined with Madagascar rosewood back and sides for a strong and powerful bass resonance – the back being inlaid with HD-28 style zig-zag peace sign marquetry. The Madagascar rosewood headplate is adorned with John Lennon’s famous self-portrait illustration that rests beneath the Martin script logo. This beautiful mother-of-pearl, John Lennon themed design is inlaid throughout this model to make this a truly unique instrument. (£8599)

CS-OM True North-16: Limited to only 50 instruments, this Orchestra model features an ebony fingerboard, bridge and headplate, a solid Adirondack spruce top and exceptionally figured Koa back and sides, which produces a beautiful, well-balanced tone. The back features a spectacular compass design inlaid with flamed jarrah, Claro walnut, waterfall bubinga and Paua pearl. The ebony headplate also has a True North design inlaid with mother of pearl. While this limited edition Custom Shop model is not a Dreadnought style, it demonstrates how a manufacturer with 183 years of tradition and premiere craftsmanship can continue to introduce innovative design elements while remaining authentic to our illustrious history. (£9,299)

000-42 AUTHENTIC 1939: Remaining true to its origins, the 000-42 Authentic 1939 is meticulously crafted with hide glue construction, dovetail neck joint, solid Adirondack spruce top with Vintage Tone System, solid Madagascar rosewood back and sides and black ebony fingerboard and bridge. This is a 000 model that will reward players with its rich sustain and crisp tone for generations. (£10,799)

00-18 AUTHENTIC 1931: Faithfully reproduced with hide glue construction, dovetail neck joint, Adirondack spruce top with Vintage Tone System, genuine mahogany back and sides and a black ebony fingerboard and bridge, this 00-12 fret guitar will appeal to a broad range of players and musical styles with its well-balanced tone. (£5,299)