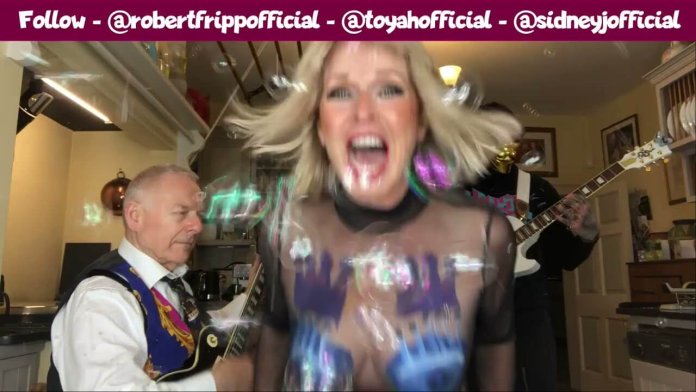 Robert Fripp and Toyah Wilcox have covered the Rolling stones’ classic (I Can’t Get No) Satisfaction as part of their ongoing Sunday Lunch cover series.

“The kitchen trio are hunting for ‘Satisfaction’ this week!” the video is captioned, and also notes that once again Fripp and Wilcox are “joined by the mysterious stranger Sidney Jake.”

As part of their Sunday Lunch series, which began last year during lockdown, Fripp and Toyah have covered music by Britney Spears, Iron Maiden and Foo Fighters, among many others, all posted via Wilcox’s youTube channel. Last week, they covered the heavy metal hit Breaking The Law by Judas Priest.

Back in February, Wilcox revealed that Fripp was “fucking furious” when his first viral video went online. She said she decided to teach her 74-year-old husband how to dance in an attempt to dispel his lockdown blues. “He was withdrawing,” she said. “So I thought: ‘I’m going to teach him to dance.’ And it became a challenge.”

When the video went online, Wilcox admitted Fripp was “fucking furious” and felt “he was being mocked”. It took some convincing, but Fripp eventually changed his tune when he learned it was a way to stay connected with his fans.

“The response was so overwhelmingly positive,” she recalled. “And now, six months down the line, he can see that it was quite an important thing to do, in that it became a shared experience with an audience that needed to be reminded of the beauty of human laughter.”

Take a look at the latest cover below.