The Wrecking Crew member played on many of the biggest hits of the ‘60s and ‘70s. 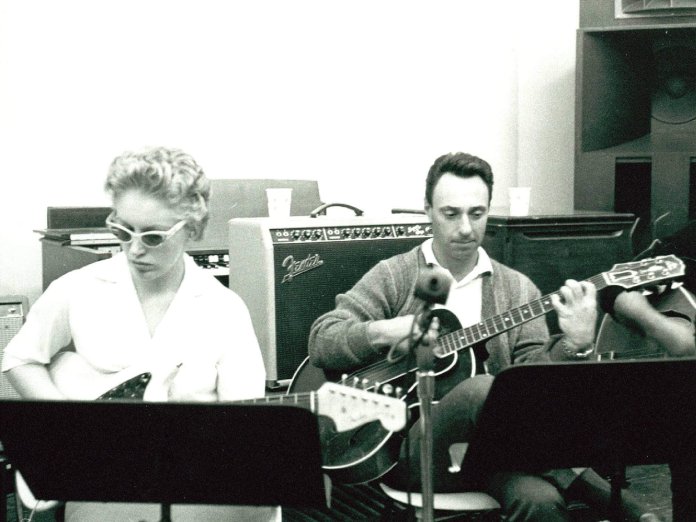 Bill Pitman, whose guitar playing backed many of the biggest songs of the 1960s and ‘70s, has died at the age of 102.

The New York Times reports that the musician passed away following four weeks at a Palm Springs rehabilitation facility, having initially been admitted after falling and fracturing his spine, according to his wife, Janet Pitman. In the past week he had returned to his home in La Quinta, California to be given palliative care, where he later died.

A renowned freelancing guitar player, Pitman’s playing can be heard on a litany of famous songs and soundtracks; from Elvis Presley’s 1961 song Blue Hawaii to the Beach Boys’ 1966 hit Good Vibrations. His ukulele playing opens the Burt Bacharach-penned Raindrops Keep Fallin’ On My Head from the 1969 movie Butch Cassidy And The Sundance Kid, just one of a long list of iconic movie soundtracks that also included 1970’s M*A*S*H, 1987’s Dirty Dancing and Martin Scorsese’s 1990 classic Goodfellas. He even composed the music for episodes of Star Trek.

Pitman was a core member of the Wrecking Crew, a crack team of session players who backed a host of musical stars in the studios over the course of the ‘60s and ‘70s. The Crew had a rotating lineup consisting of some of LA’s most venerable session players, including Hal Blaine, Tommy Tedesco, Glen Campbell, Leon Russell and Carol Kaye.

Their clients included the Beach Boys, Frank Sinatra, Nancy Sinatra, Sonny and Cher, Jan & Dean, The Monkees, Gary Lewis and the Playboys, Mamas and Papas, Tijuana Brass, Ricky Nelson, Johnny Rivers and more. They were also the musicians who made Phil Spector’s legendary Wall of Sound production technique a reality.

In 2008 Tommy Tedesco’s son, Denny Tedesco, made a documentary about the Wrecking Crew. In the titular film, Pitman shared insights into the Wrecking Crew’s demanding schedule, which often involved several sessions in a day.

“You leave the house at seven in the morning, and you’re at Universal at nine til noon. Now you’re at Capitol Records at 1. You just got time to get there, then you got a jingle at four, then we’re on a date with somebody at eight, then the Beach Boys at midnight, and you do that five days a week,” he remembered.

Born in 1920, Pitman grew up in New York City, the son of a bass player. He later moved to the west coast to pursue music after returning from the Second World War. His first major break came in 1951 when he was hired as a replacement guitarist in Peggy Lee’s band, and soon after joined the orbit of musicians that would come to be known as The Wrecking Crew. In 1989 Pitman retired. He is survived by his wife, son Dale and daughters Donna Simpson, Jean Langdon and Rosemary Pitman.