The version returns the rock to Wilson’s experimental track. 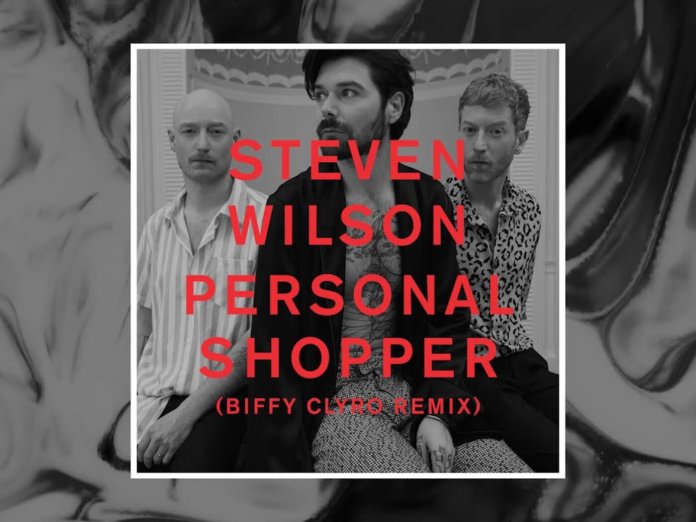 Teased as a collaboration yesterday, Steven Wilson has released the Biffy Clyro remix of his track Personal Shopper, from his recent album The Future Bites.

The original version, included a spoken word piece from Elton John, divided fan opinion. Its heavily electronic direction turned off some fans who were expecting a more rock sound from the album. Those fans that weren’t a fan of the electronic aspects should be pleased with Biffy Clyro’s remix, however, as it adds in heavy, distorted guitar and aggressive drums.

Steven Wilson said in a statement: “Personal Shopper has already been chosen by numerous artists as the ‘The Future Bites’ track they wanted to remix and it’s been fantastic to hear all the different interpretations.

“Now Biffy Clyro have come with perhaps the most radical reinvention of the song by taking the mainly electronic track and reimagining it as a huge guitar anthem, which just blew me away. Perhaps one for those that missed hearing the guitars in my recent music.”

Listen to Biffy Clyro’s version of Personal Shopper below

Wilson recently caused a stir by crediting Eddie Van Halen with the invention of the “so-called shredder mentality” that he dislikes. His comments caused him to apologise to Eddie’s son, Wolfgang Van Halen, for how he phrased his criticism. On Twitter, he wrote:

“Dear Wolfgang Van Halen, apologies, no disrespect was meant to your father, an extraordinary musician,” he wrote. “I personally never owned any Van Halen records and didn’t ever get into the style of playing, but he was clearly an incredible innovator.”

The tweets continued: “So when asked about his passing I couldn’t honestly say I was affected deeply by it, at least not in the way that my heroes Bowie or Prince’s passing had affected me.”

“This statement was given in honest humility. Forgive me for any offence unintentionally given, and I offer my deepest condolences. SW.”

Wolfgang accepted the apology in a tweet of his own, which read: “Incredibly kind of you to say, Steven Wilson. I meant no ill will in my previous tweets. As I said, the internet was exacerbating what you had said, as the internet tends to do. Still very kind of you. Be well, friend.”