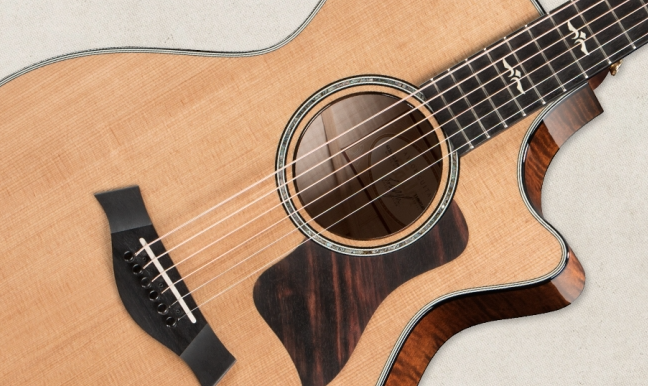 Press Release
Frankfurt, Germany (April 15, 2015) — After unveiling a transformative redesign of its maple 600 Series acoustic guitars earlier this year at the Winter NAMM Show, Taylor Guitars is expanding the rollout this spring. The new 600s, which were revoiced to bring out a richer, warmer maple sound and given a major aesthetic makeover, made their debut with an initial release of four models – the 614ce, 616ce, 618ce and 12-string 656ce. In the wake of rave reviews from industry leaders, dealers and media, two Grand Concert models join the series this spring: the 612ce and 612ce 12-Fret.

The new models embody the same tone-forward vision as their 600 Series siblings, with shape-specific bracing and wood thicknesses, thin finish, and new seasoning processes like torrefaction, which together expand maple’s tone profile to include more complexity and overall playing versatility. Despite the smaller dimensions of the Grand Concert body style, Taylor Master Builder Andy Powers was able to elicit a surprisingly potent sound. “It has a delicate, articulate voice, but it’s not a quiet or weak-sounding guitar,” he says. “It’s actually really loud and powerful. But because the shape is a smaller outline, it will emphasize a certain clarity in its articulation and a certain high-end chime that a larger guitar won’t.”

Specifically with the 612ce 12-Fret model, the geometry of the bridge to shorter neck results in a different voicing option for fans of the Grand Concert shape. “By making a shorter neck, you shift where the strings fall in relation to the body,” Powers says. “The bridge sits in a different spot on the body, so the way the player drives the top is different, with an extra robust punch in the midrange. It makes for dramatically present notes.”

Notable design innovations on the new 600 Series models include:
Customized Wood Thicknesses and Bracing: The top and back thicknesses have been specially gauged for each body shape. Powers also optimized the bracing for each shape. The backs feature new maple-specific bracing profiles and patterns to enhance the responsiveness. As a result, he says, “the backs of these guitars work a lot like an archtop guitar or a violin if you were to delete its soundpost. These braces allow the back to move in a much warmer, stronger way. Players will hear more volume, more projection, and more low-end warmth than a maple guitar they’ve heard in the past.” The back and sides also undergo a special seasoning process to enhance the resonance and stability.

Torrefaction: This carefully controlled, high-temperature roasting process is applied to the Sitkaspruce tops to give a new guitar an aged or played-in sound. By aging the wood on a molecular level, torrefaction makes the top warmer and more responsive. “There’s less resistance in the wood,” Powers explains. “As a result, it allows a more efficient energy transfer from the strings. A new piece of wood has quite a bit of resistance to moving. It’s not used to vibrating at a high frequency like that. An aged or played-in top is just waiting to be set in motion. For a player, it feels like the notes are just falling out of the guitar. As soon as you touch the strings, it takes hardly any effort; it doesn’t feel like you have to pry the sound out.”

Hand-Rubbed Color and Finish: Not only do the new 600s feature the same ultra-thin 3.5-mil clear gloss finish developed for the 800 Series, the maple back and sides boast an additional breakthrough: the inclusion of a proprietary hand-rubbed color application process that adds no additional thickness to the finish. The stain enhances maple’s visual aesthetic without causing any damping in the natural movement of the guitar body, helping to boost the tonal projection and sustain. The new color, “Brown Sugar,” complements the slightly darker color of the spruce tops, a result of the torrefaction process.

Protein Glue: The same protein glues used in the company’s redesigned 800 Series are used in the 600 Series for the critical tone-producing parts, namely for the “power train” components: the bracing and bridge-to-top joint.

Expression System 2 Pickup: The acoustic voicing enhancements designed for the new 600 Series translate into amplified form with Taylor’s new Expression System® 2 (ES2) electronics. The ES2 incorporates three uniquely positioned and individually calibrated pickup sensors. These are installed behind the saddle, through the bridge, and effectively capture more of each guitar’s dynamic properties and acoustic energy.

First World Tonewood: Maple is a tonewood that can be harvested specifically for instruments here in the United States, a project that longtime tonewood supply partner Steve McMinn of Pacific Rim Tonewoods is undertaking. Given its geographical location, maple grows in politically and economically stable environments and is considered to be “conflict free” and well-managed. This is important to Taylor co-founder Bob Taylor. “Now and in the future, maple forests will be among the healthiest and most sustainable sources of instrument wood,” he says. “This is a species from our own backyard that can be formed into world-class instruments for generations to come. So, it is an important wood for us as a forward-thinking instrument manufacturer. This redesign is our way of showing players how great a maple and spruce instrument can look and sound.”
Click Here For More Info