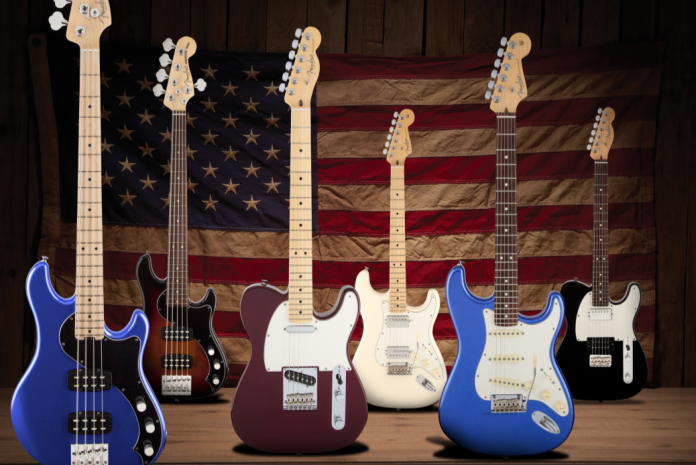 SCOTTSDALE, Ariz. (Jan. 22, 2015) – Switzerland has its watches and clocks; Italy has its textiles and tailored suits. And while France has an edge when it comes to luxury goods[1], the United States certainly has a wealth of exports it can take pride in — none more definitively and often defiantly American than its electric guitars and basses.

Fender Musical Instruments Corporation is considered by many to produce the pinnacle in U.S.-made electric guitars. The company was founded in Southern California in the mid 1940s and soon began building electric guitars and basses that would become the global standard — most notably the Telecaster®, Stratocaster®, Precision Bass® and Jazz Bass® guitars. Known for their unmistakable tone, comfortable feel, durability and overall value — in the hands of artists such as Buddy Holly, the Beatles, Jimi Hendrix, U2, Nirvana, John Mayer, Radiohead and countless others — Fender electric guitars and basses have become the world’s most popular electric instruments.

The Fender American Standard series represents the core of the company’s U.S.-made instrument lineup. Handcrafted in Corona, Calif., American Standard series guitars and basses are created using more than 140 hand-performed processes, and feature the best of yesterday and today — showcasing classic looks with more modern upgraded features. The series was launched in 1987, and has grown to become Fender’s most popular U.S.-made electric instrument family.

“Fender is an American icon that helped shape modern musical history, and it’s our duty to keep our legacy pure and authentic,” said Justin Norvell, vice president of product marketing for Fender. “To that end, while we’ve modernized our facilities, many of our processes are done by hand — on the American Standard series and others — just like they were in the 1950s and 1960s.

In one of the U.K.’s most acclaimed music retailers, Andertons Music Co. in Guildford, Surrey, Lee Anderton noted that “Since we first opened our doors in 1964, our customers have wanted to buy American-made guitars.

“We sell instruments from all over the world, but nothing quite captures the magic or the heritage of an American-made guitar,” Anderton added. “I still get excited every time I open the case of an American-made Fender guitar — there’s just something magical about the American Standard series. That feeling of finally owning the same guitar that all the greats have played. Not a copy, but the real thing.”

“American-made Fender guitars are the most coveted guitars in Japan for more than 50 years and still continue to be today,” said Takahiro Nishioka” of Ikebe Gakki, one of Tokyo’s largest and most well-known music retail outlets. “Our business and reputation as a cool ‘guitar shop’ depends on Fender guitars made in America; specifically the American Standard Stratocaster.”

“More than 85 percent of the guitars sold in the U.S. over $1,000 are made in America,” said Music Trades editor Brian Majeski. “Fender guitars account for a large share of that percentage; however, other American makers also offer a level of quality and prestige that commands premium prices.”

As a matter of fact, the world’s 10 most expensive guitars were all made in the United States. Six of them were handcrafted by Fender and the most expensive was a Fender Stratocaster that commanded an astounding $2.7 million at a November 2005 auction benefitting victims of the December 2004 Indian Ocean tsunami[3].

Fender is celebrating the American Standard series this year and is kicking off the campaign Jan. 22-25 in Anaheim, Calif. at the music industry’s largest tradeshow, The 2015 NAMM Show. As part of the celebration, the Fender booth will exhibit American Standard series instruments alongside other examples of equally classic and iconic Americana. And while the tradeshow is only open to industry personnel, interested members of the public can take part in the celebration at their local authorized Fender dealers.

For more information and to find a Fender Premium Showcase Dealer, visit www.fender.com.