PAF replicas based on the pickups in Paul Kossoff’s Les Paul, sublime vibrato not included. 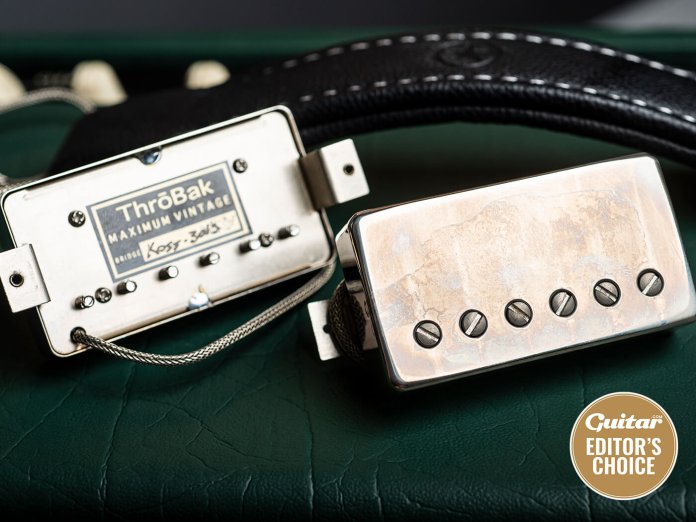 Paul Kossoff’s famous broken-neck 1959 Les Paul was in the custody of his friend Arthur Ramm for several decades before being purchased in 2016 by Mississippi native and guitar collector Kris Blakely. Blakely subsequently approached John Gundry from ThroBak Electronics, who was granted access to analyse the PAFs in the Kossoff Burst in order to create this replica set.

When Kossoff broke the instrument’s neck in the early 1970s, it found its way to legendary luthier Sam Li for repair. In addition to the neck repair, the bridge pickup was in need of attention. The PAF’s original coils were machine wound with plain enamel magnet wire, but Li rewound one coil with heavy formvar wire using a machine made from an old record player.

Li actually reverse-wound the coil, which necessitated reversing the coil’s start and finish wires and a magnet flip during reassembly. If this sounds familiar, you won’t be surprised to learn that Li was the man behind the pickup repair that gave Peter Green’s Burst its distinctive sound, although Kossoff’s pickup remained in phase.

The ‘301’ in the name of this repro pickup set refers to the Meteor-301 winding machine that was one of four machines Gibson used back in the 1950s. ThroBak uses refurbished vintage winding machines exclusively, and familiarity with their winding patterns enabled ThroBak not only to identify the machine that wound the three surviving coils on the Kossoff Burst but also to use the same type of machine for these replicas.

Most original PAFs have brass bobbin screws, but the pickups in Kossoff’s guitar have steel. ThroBak also analysed the magnets, and gauss readings matched alnico II and alnico IV. After listening tests, long alnico II magnets were chosen for the replicas along with 1010 steel bobbin screws.

All the features are up to ThroBak’s exacting vintage standards. Our review set has aged nickel covers, but pristine covers are also available, along with a ‘pre-repair’ Kossoff set based on a best guess regarding the original bridge coil prior to Sam Li’s rewind.

We can’t fly to Mississippi to compare these pickups to the originals,  but we do have a rather nice PAF-loaded 1953 Les Paul conversion on hand for comparison purposes. It’s immediately apparent that the ThroBaks sound an awful lot like vintage PAFs… but with a twist.

Like our vintage PAFs, the ThroBaks provide extreme clarity, touch sensitivity and amazing sustain. The vintage units are slightly scooped in the mids, which emphasises ethereal harmonic overtones and breathy detail. However, this could be attributable simply to magnet differences.

The ThroBaks’ more forward midrange combines with slightly more aggression in the upper-mids, but the all the clarity and precision are there to cut straight through a mix. Single notes also have more girth, especially on the bridge.

We’re impressed with the bite, but they’re less quacky and clicky than the vintage PAFs. It’s quintessential Les Paul rather than ‘Tele on steriods’, and both sets have that pronounced transition from crisp articulation on the plain strings to a slight softness on the wound strings.

The differences are more pronounced with clean tones than crunch, but the vintage PAFs always have a touch more chime. That said, the ThroBaks offer authentic vintage PAF tones with extra attitude –the only inevitable disappointment is that they won’t make your playing sound quite as good as Paul Kossoff’s.