Martin’s Modern Deluxe series seamlessly combines the classic with the cutting edge. Can an industry standard be reinvented? 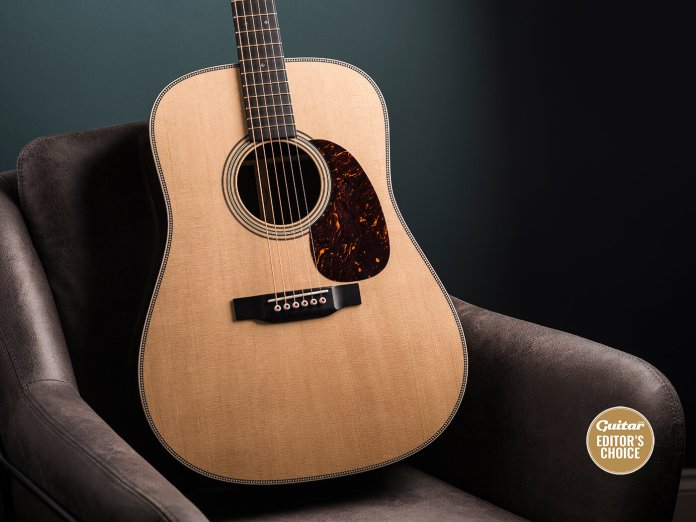 Although the Modern Deluxe edition of the evergreen D-28 dreadnought is packed with modern features and innovations, Martin isn’t exactly flaunting them. At first glance, this guitar looks much like any other high-end D-28, and its special attributes only become apparent on much closer examination.

Let’s begin with the more obvious. This is almost certainly the first Martin this writer has seen with wood bindings, in this case flamey European maple that looks fantastic against the herringbone purfling and the darker East Indian rosewood back and sides. On the headstock, Martin logos generally take two forms: gold script decals and elaborate pearl inlays. Here, however, we get a combination because the 1930s-style script logo is actually an abalone inlay.

There’s also something unusual about the bridge pins with their recessed red dots. They’re described as Liquidmetal pins, which is a non-crystalline material that can be injection moulded. This means the pins are cheaper to manufacture than machined metal pins, but they provide a claimed 4dB increase in volume compared to plastic, wood and bone pins.

Martin’s VTS (Vintage Tone System) tops are torrefied, but there’s a reason the Sitka spruce here retains its paler natural look. Martin’s research suggests that most torrefied acoustic tops are closer in moisture content and cellular structure to spruce that’s over a century old. Since the period immediately preceding WWII is considered the finest for vintage Martin tone, the company decided that in some instances, regular roasting goes a bit too far.

Instead, the M1 system was developed to create ‘aged’ tops that are closer to those that are 70 or 80 years old. If you want even ‘older’ sounding and darker looking soundboards, then Martin’s M2 tops are the ones for you.

Aside from superb build quality and playability, perhaps the most interesting aspect of the Modern Deluxe D-28 is the way Martin is combining traditional building methods with cutting-edge materials. For instance, ‘natural protein glue’ is an innocuous term for fish glue, and a dovetail neck join combines with pre-war style forward-shifted scalloped bracing. These are juxtaposed with an ultra-light, super-strong carbon-fibre bridgeplate and a titanium truss rod that’s 45 per cent lighter than an equivalent steel truss rod.

From the 1920s until 1934, Martin used ebony strips to reinforce necks. T-bar rods lasted until the war, when ebony and T-bars were used interchangeably depending upon the availability of steel. The point is that low-mass necks were a feature on many great vintage Martins and the company has recently been using carbon-fibre neck-reinforcement strips in some historically inspired models for this very reason. Adjustable titanium rods could offer the best of both worlds.

The satin-finished mahogany neck is far from traditional, with a slim and asymmetrical version of Martin’s High Performance profile that’s exclusive to the Modern Deluxe series. Plek’d gold frets match the open-gear Waverly tuners, which combine classic looks with stellar performance. The Waverlys are incredibly smooth and accurate and you’d struggle to find anything superior.

As luck would have it, this D-28 arrives with us at the same time as a fairly recent D-45 that’s here for some minor set-up work. With both guitars sporting fresh string sets – Martin Authentic Acoustics and D’Addario Phosphor Bronze 0.012s – we have an opportunity to compare like with like… or not, as the case may be.

The D-28 sounds louder and is quicker to respond. The treble response is about the same, but there are noticeable differences in the bass and midrange. The D-45 produces a deeper thump, although the D-28 certainly isn’t lacking in low end.

The midrange characteristics demonstrate the real contrast, with the D-45 having that classic scoop where the fourth and third (D and G) strings sit back a little. The D-28, however, is far more balanced across the strings; its mids have more presence and punch, and low notes have a crisper attack. It’s still recognisably a Martin dreadnought tone, but to label it as ‘updated’ or ‘modernised’ would be oversimplifying matters. There’s something more considered and interesting going on here.

With this Modern Deluxe D-28, Martin has managed to bolster the mids and even out the string-to-string response – in a way that seems quite in vogue – without losing what we like about the company’s traditional dreadnought sonic signature. It’s not excessively bright, the bass is effectively de-boomed without sacrificing power and the sustain is remarkable.

Although the D-45 provides a warmer and mellower playing experience, it doesn’t mean it sounds more vintage. We’ve come to associate vintage Martins with airy and ethereal chime, and of these two dreadnoughts, the D-28 comes closest to that. The downside is that plain strings can sound a touch thin, but in the case of this D-28, they have real substance.

The D-28 also has a greater tonal range than its stablemate. It’s that ‘three pickups’ thing we look for when we move a plectrum from the area in front of the bridge to the edge of the soundhole and onto the end of the fingerboard. We hear three very distinct sounds and also find that the D-28 has a greater dynamic range. It will respond to a gentle touch almost as well as it would to a heavy right hand.

Where the D-45 reveals its sonic charms in a subtler and more gradual way, the Modern Deluxe D-28 exhibits its purpose immediately – to combine time-honoured Martin tone with the midrange balance and livelier response that many contemporary players prefer. Impressive stuff.