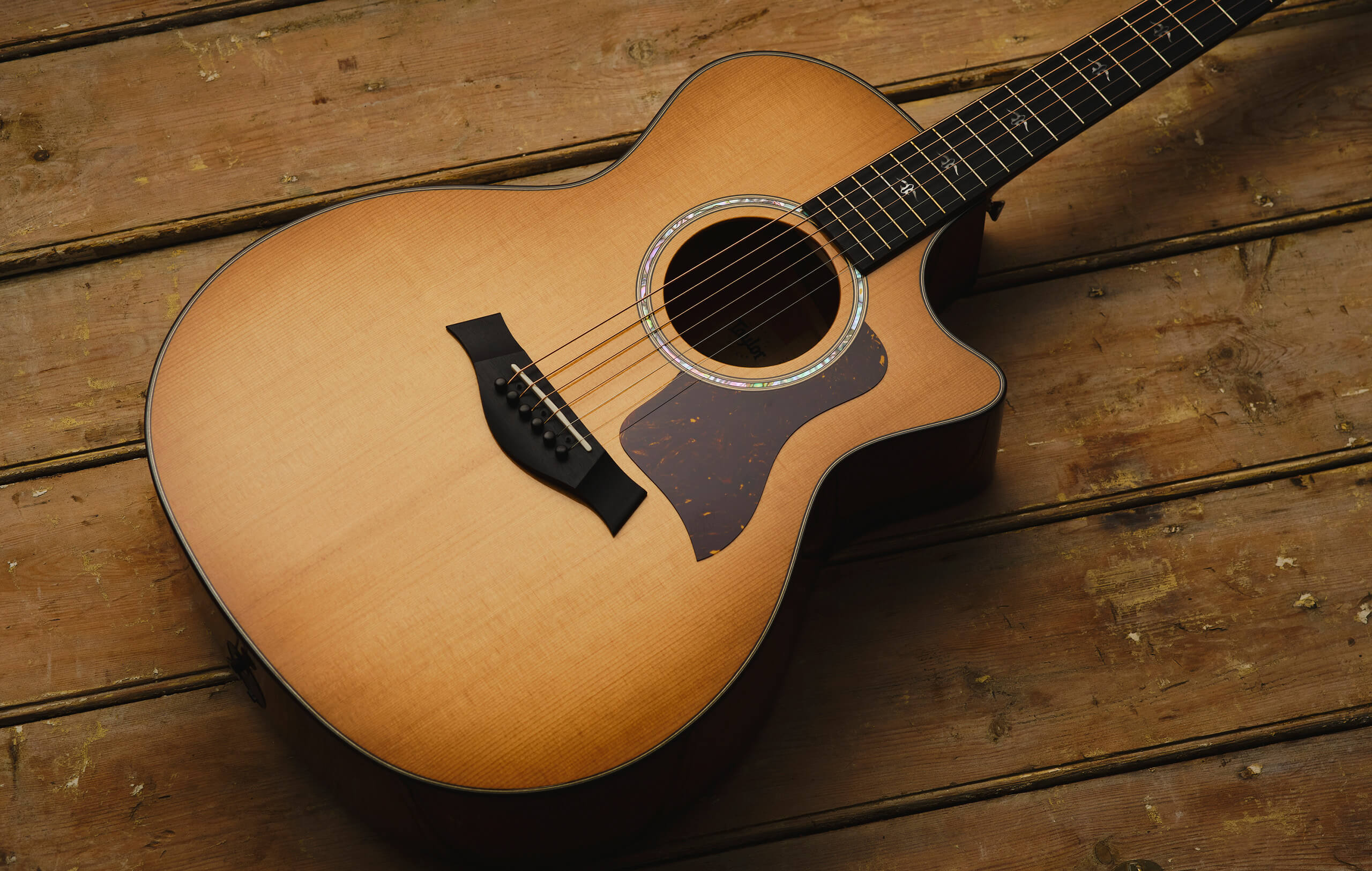 The Big Review: Taylor 514ce Urban Ironbark – This sustainable powerhouse pulls its weight in the lineup

The debut of a new sustainable tonewood for Taylor marks a new era for the 5 series.

A welcome big-voiced addition to the Taylor line with an emphasis on power. We like!

When is a Taylor 5 series not a Taylor 5 series? For decades now the fifth echelon of the Californian acoustic guitar powerhouse’s output has been synonymous – not counting a couple of dalliances in other exotic directions – with that most traditional of guitar woods, mahogany.

However sweeping reforms throughout Taylor’s catalogue – that build on the company’s uncompromising foundation of responsible stewardship of rare woods and the mission to find sustainable alternatives for depleted traditional timbers – mean that the sweet, sweet Swietenia macrophylla is now off the 5 series menu in favour of what Taylor call – drumroll please – Urban Ironbark. Yeah. We hadn’t heard of it either but there we go. 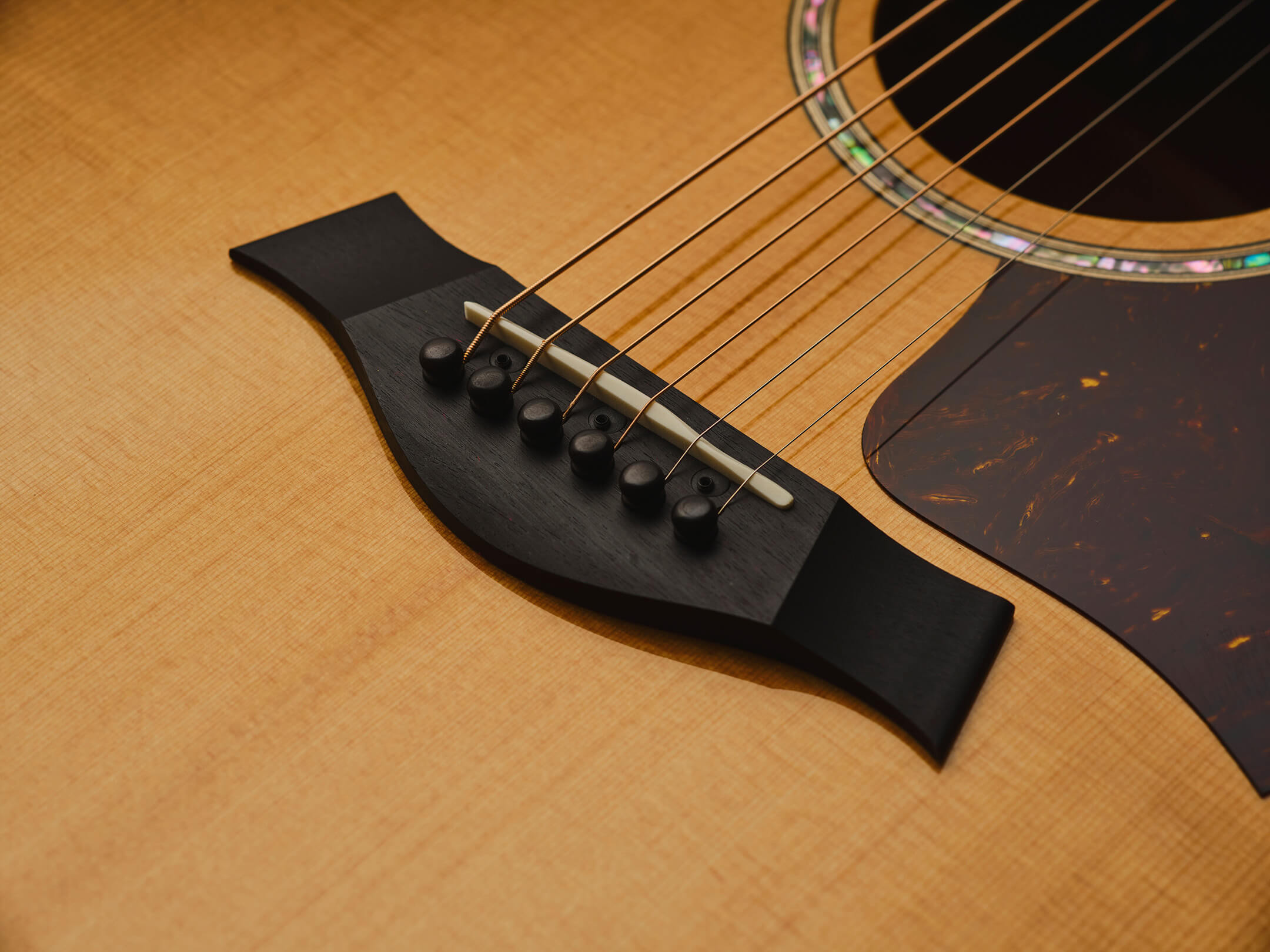 The first part of the name refers to how it’s sustainably harvested, the second word is from its rough, dense bark which resembles molten iron slag. Ironbark is a member of the Eucalyptus family which Andy Powers, Taylor’s CEO, president and design visionary, loves for its great working characteristics.

It’s a dense wood, a hard wood that sinks in water – like cocobolo – and it is most commonly seen on the sked of a ship where its adamantine density makes it the ideal wood for use as a bug shoe to protect a vessel from worms. This, we think you will agree, is exactly the sort of incisive commentary that can only be found here on Guitar.com. But wait, there is more. 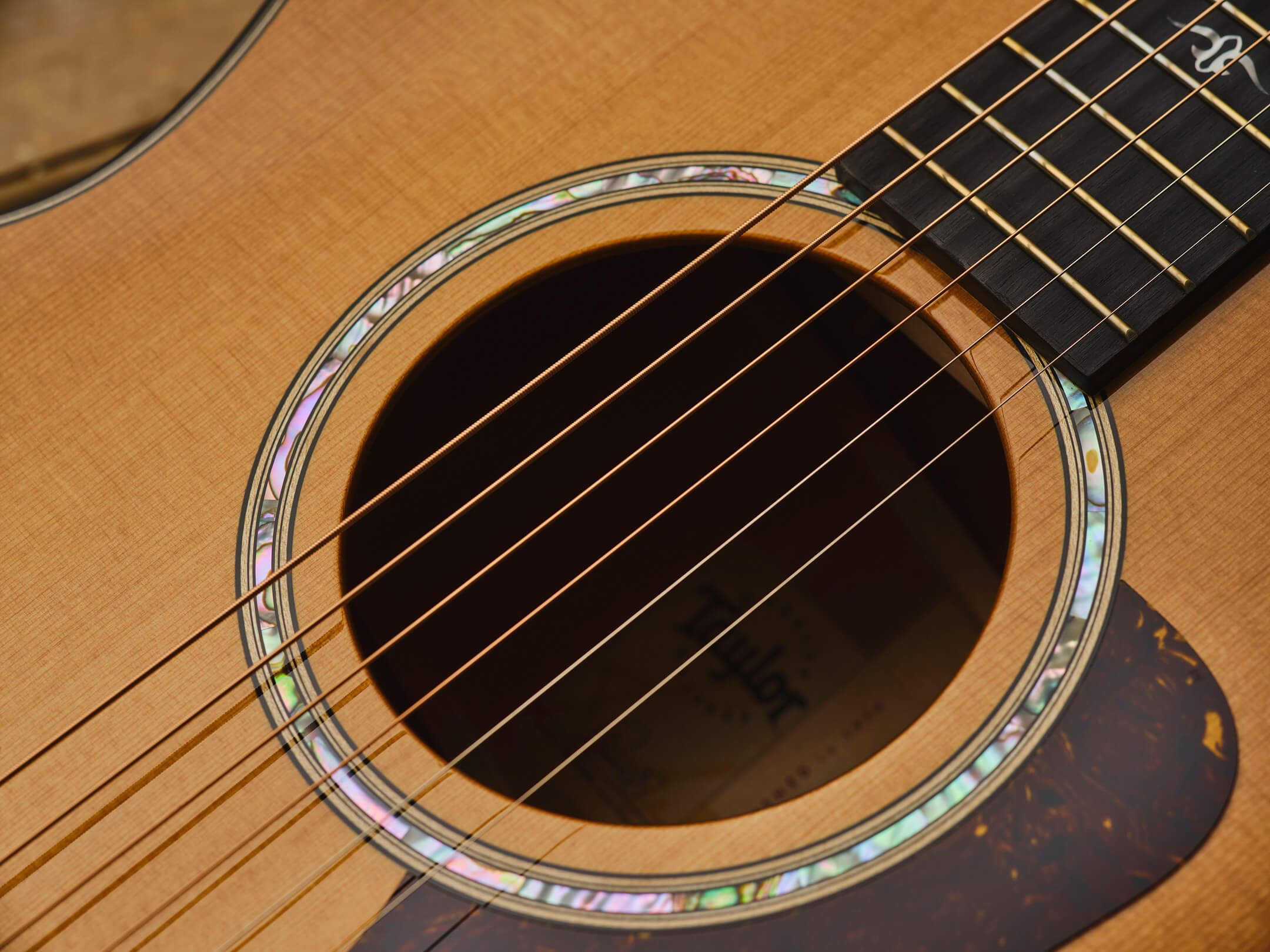 With such an evocative name you would be forgiven for assuming that the wood itself boasts some sort of dramatic figure. In fact the opposite is true; this stuff looks almost exactly like mahogany. If not the fabled Cuban genus then perhaps one of its African cousins such as Khaya. It’s light brown, even under the gently tinted finish, with a tight, feature-free grain.

There is no denying that this is a handsome guitar with the subtle ‘burst on the roasted spruce soundboard, plastic tortoise-style binding, Italian acrylic inlays and genuine abalone rosette. The overall effect is very much in keeping with the Powers-led visual language of slightly dusky, brooding instruments which despite their posh gloss finishes still feel a little wild and exciting. 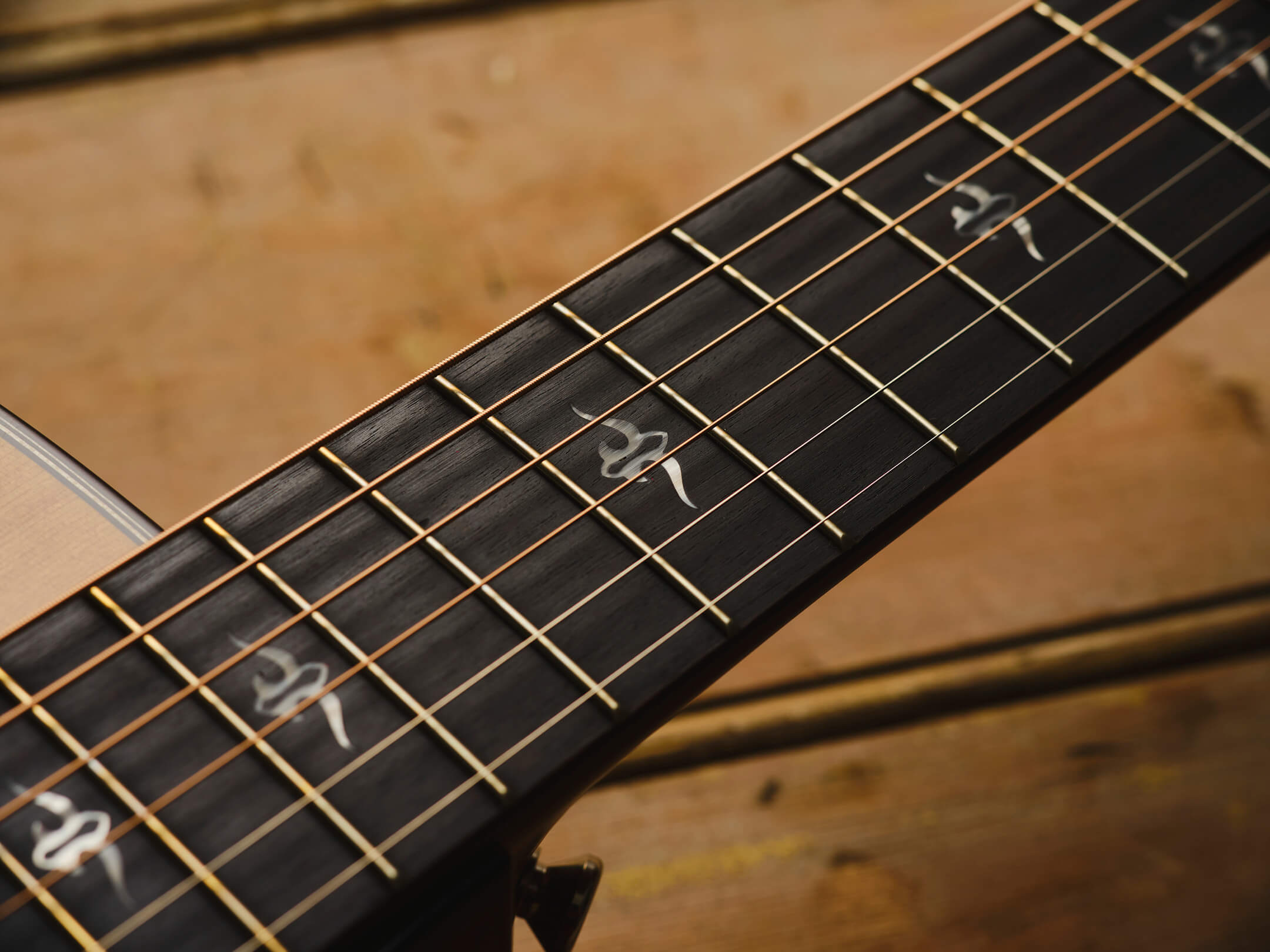 As the CE on the end of its name suggests, the guitar comes correct with an elegant rounded Florentine cutaway and Taylor’s dependable ES2 active pickup system putting it firmly in the stage-ready acoustic category.

Taylor’s Grand Auditorium model has proved itself over the years as a sonically versatile machine which keeps things consistently manageable in the ergonomics department, and this guitar is no exception. The slightly rolled off body edges ensure it’s a comfortable enough squeeze and the neck, although sticking to Taylor’s generic carve, feels welcoming. The set up, as ever, is very good indeed. 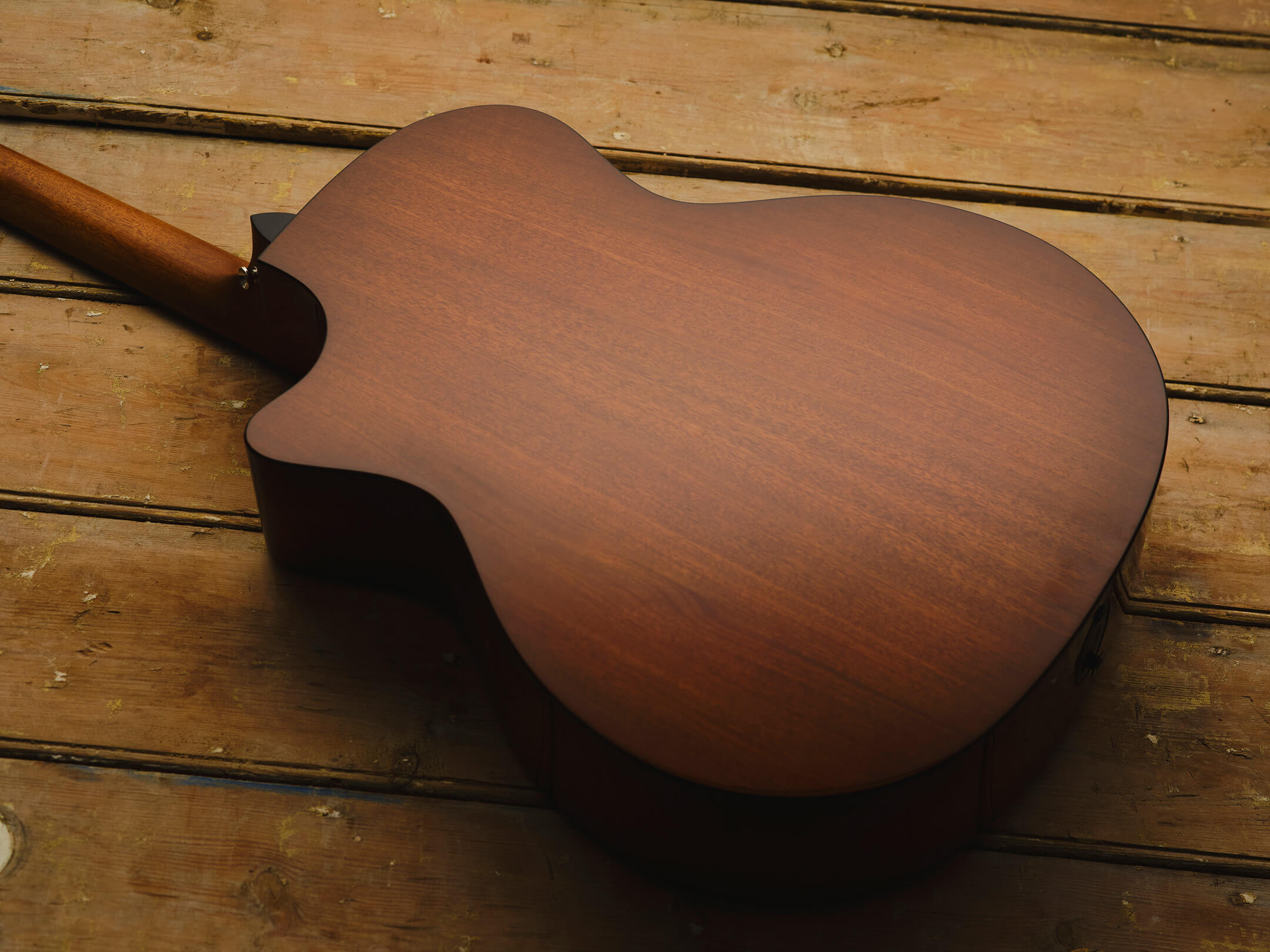 In support of this new Taylor 5 series, Andy Powers has been very vocal about the sonic properties of his Urban Ironbark, going as far as to say that the response of the wood within the context of a Taylor guitar reminds him of ebony or even rosewood at times. Bold claims indeed, but if we follow this line of logic then we can expect a rich overtone content while the addition of the roasted spruce soundboard – now an increasingly common touch – may well bring further flex warmth in the top end. Time to hear it sing. 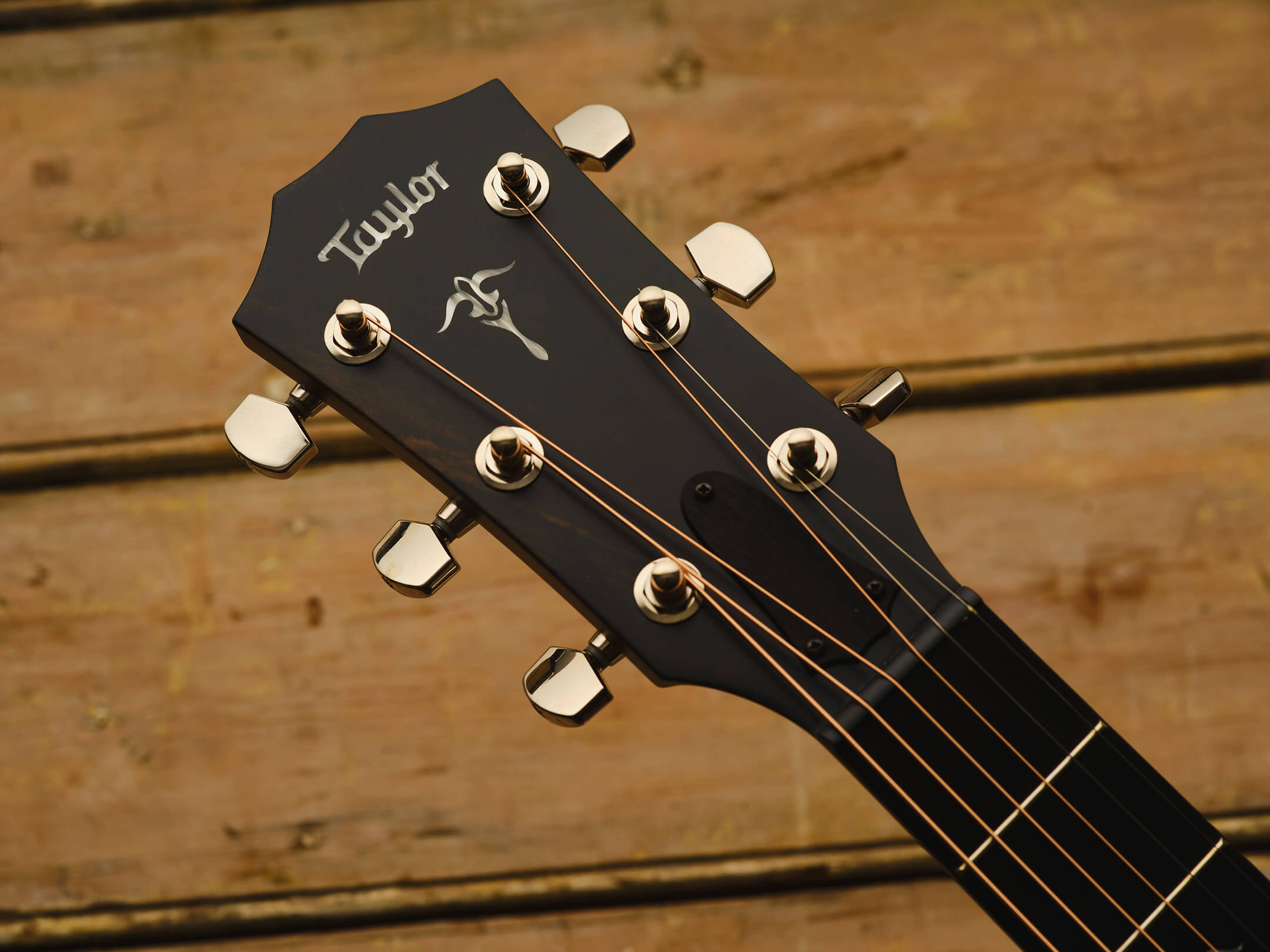 The first strummed chords reveal that this is a bright guitar – even by Taylor’s treble-forward standards. In that regard the comparisons to ebony certainly do stand up, and the use of a roasted soundboard makes increasing sense as we have found that this approach tends to help smooth off a more aggressive high-end response.

Moving barre shapes up and down the neck shows that while the character of the instrument’s voice remains consistent across the spectrum its response does not. Within the chords certain notes die off – seemingly at random – noticeably faster than others. As such the decay can be a little unreliable. 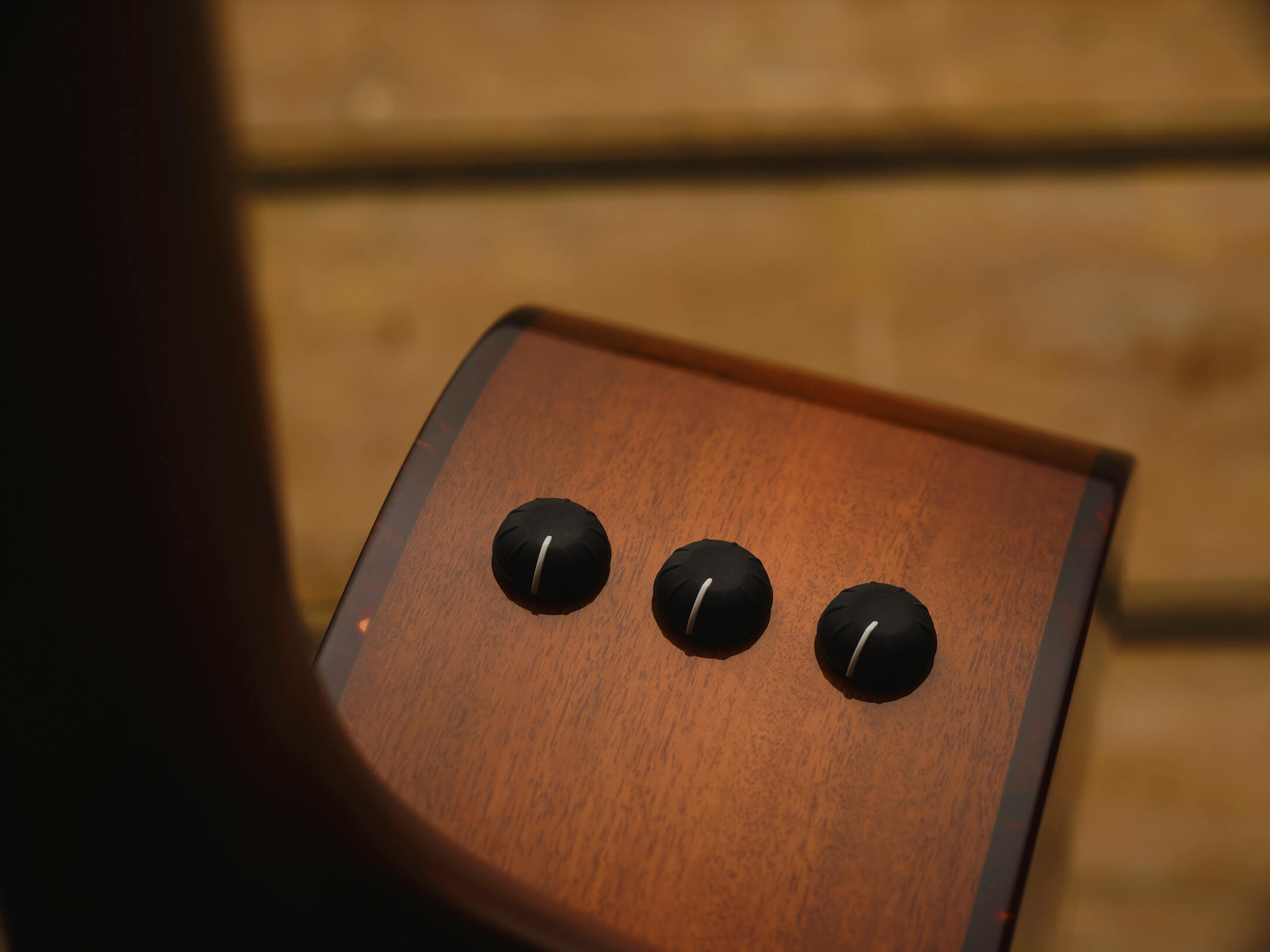 Taking a .60mm pick to the beast brings out a compressed, focused side of its voice. This works particularly well on arpeggiated chords and open folk-style runs with minor 11 and sus 2 ideas – the individual notes smearing musically into one another in a way that we find very pleasing. Digging in a little more heavily brings the trebles out further and we get some great snarling blues bends when using the edge of our pick.

Trying a gentle standard tuning fingerstyle approach with short polished nails does not do the guitar’s acoustic voice much in the way of favours. Much of the clarity and nuance is lost as a lighter attack just doesn’t drive the top as well. This could be the fact that it’s built a little heavy, the V-class bracing or any one of the beautiful variables that make the creation of acoustic instruments such a graceful challenge. 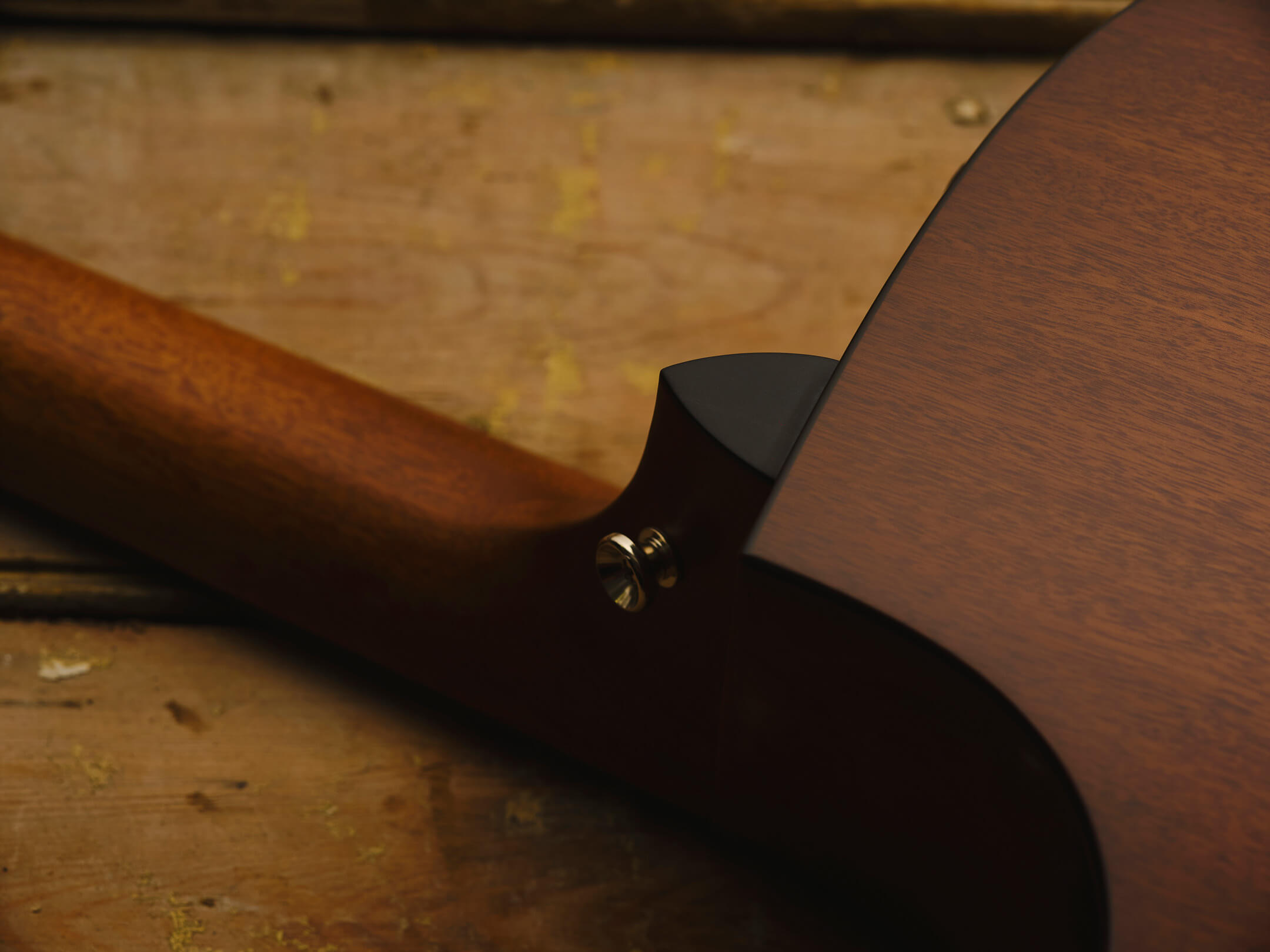 Slipping into DADGAD we find the potential for expressive fingerstyle is greater than in standard tuning but we can’t help feeling that the guitar’s heart just isn’t in it. This is not an instrument for effete filigrees. No, what this guitar wants is to be ridden hard with a joyful room-filling heavy strumming approach. When played with this mindset the 514’s powerful voice and self compression make it an ideal studio squeeze – perhaps even more so than a Gibson Dove or Martin D-28. It’s not shy and will bully its way through the mix with style. We hope they’ll do a 12-string!

It is fascinating to see the differences in the Taylor guitar line being dictated not just by wood choice but also by distinct sonic personality. Could this herald a Taylor 5-series built for the modern folk/rock/punk player in all of us?