The Genius Of… 4-Track Demos by PJ Harvey

Rid of Me may be considered Harvey’s masterpiece but its demos hold an intoxicating, whispered and howled power all its own.

In Harvey, then in her early twenties, listeners could see themselves and the woman they wanted to be. Harvey was an angular, theatrical waif – dark-haired, ghostly pale, wheedling Lick my legs, I’m on fire one second and raging Don’t you wish you never, never met her? the next.

She was untamed, wild in a way that felt nerve-tingling: sexual, sensual, violent and demure without signposting which Harvey was about to emerge in the following moments. She was an art school student, her sculpture degree deferred to fulfil a record deal she’d signed for 1992’s Dry. She’d defer it again to write 1993’s Rid of Me, during which these demos emerged.

The album was recorded directly to a Yamaha MT 2X 4-track recorder in a flat above a Dorset restaurant. Harvey was listening to records, reading profusely, deeply engaged in the act of language as a rebellion and an act of love. Her voice is more than a song, it’s a hiccupping, percussive, unbridled instrument.

She urges you to “rub it better, until it bleeds,” then hollers and howls at the man who’s left her pregnant and alone. She musically manifests elements of the primitive female brain – a wolfish, fanged mother protecting her kin – and the lustful, insatiable Aphrodite unashamedly hungering for sexual healing, since love seems so flawed and impossible.

4-Track Demos features 14 songs, but listeners who heard Harvey’s albums in chronological order were aware that eight of those raw, unpolished recordings were later gussied up for her second album Rid of Me, released a few months earlier by Island Records. 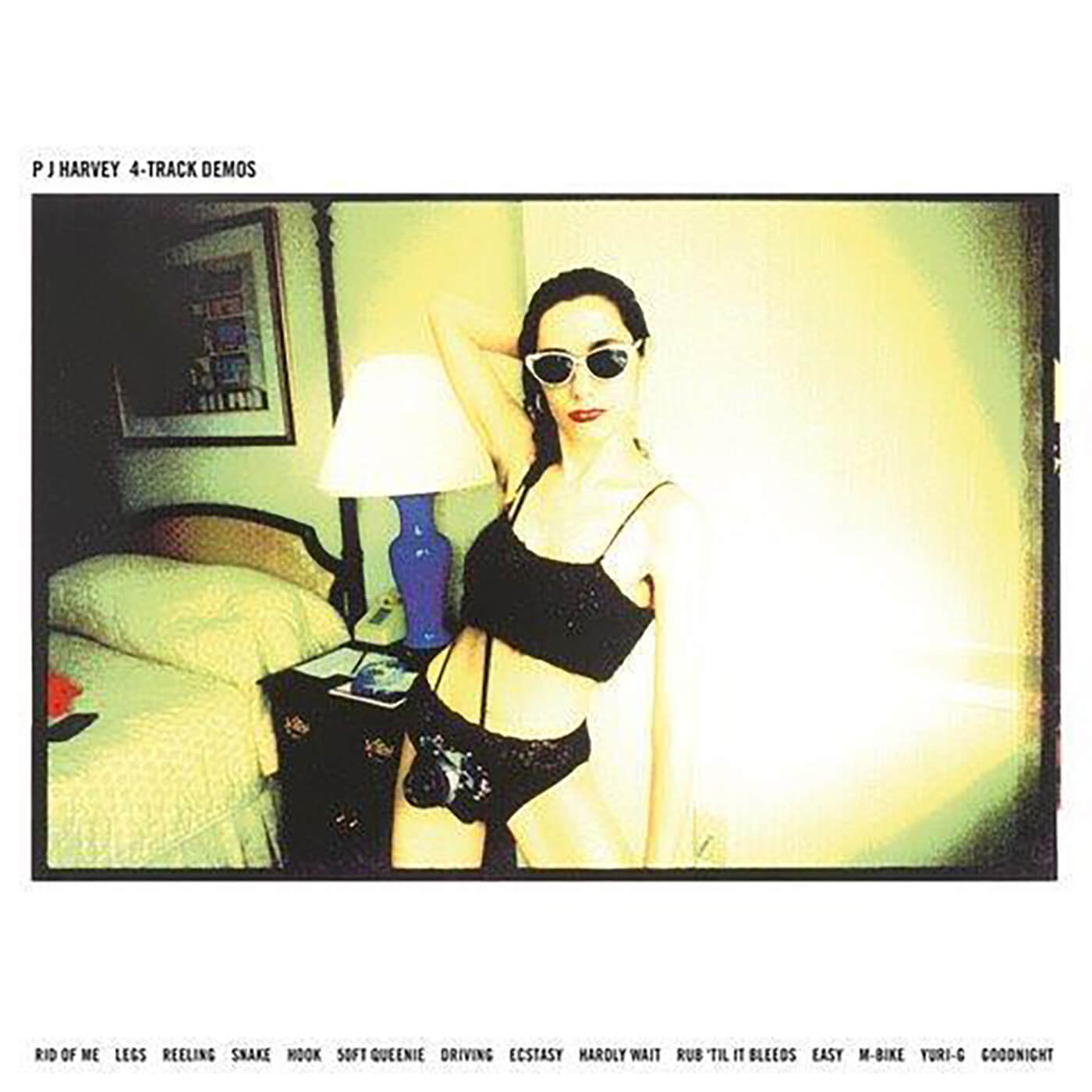 All 14 songs were recorded towards the end of 1991 and into 1992, not long before the release of Dry. Apart from Reeling, the opening few songs were all featured on Rid of Me. On Legs, before Harvey howls in a trembling voice that approaches flamenco-style Spanish folk, she can be heard coughing off-mic. So intimate is Harvey with her tape machine that her movement – the sweat on her fingers fuzzing off her guitar strings, her groans and heaving sighs, every sneaky throat-clearing – is beautifully captured.

On the next track, Reeling, Harvey hollers. “Robert De Niro, sit on my face,” before introducing a manic keyboard accompaniment for extra drama. “Even Aphrodite, she got nothing on me,” she insists, her dark tone daring you to disagree. It’s one of many glimmering, humorous, anthemic moments on 4-Track Demos in which Harvey sets herself up as some sort of regal indie-rock guru, an experimentalist extraordinaire.

You snake / You crawled / Between my legs’ opens Snake, a punchy song in which Harvey’s protagonist reveals her pregnancy to a “salty dog” who has knocked her up and then rejected her, perhaps even accusing her of infidelity. The snake, a reference to the male appendage, is also a reference to the biblical story of Adam and Eve. Harvey had referenced heavily patriarchal religious oppression in albums past, and it continues to be a theme for her here however obliquely.

In a sense, 4-Track Demos was an organic Harvey creation and a rebellion against her label, which had rejected her wish to release a limited-edition double album for Dry, inclusive of the studio version and demo versions. She realised this plan only in the past few years, releasing all her demos digitally and on vinyl. They’re treasures for collectors and revelations for new listeners.

It was the right time, culturally and musically, for Island to support Harvey in releasing 4-Track Demos, however reluctantly. At the peak of the grunge era, Nirvana, Mudhoney and L7 rubbed shoulders with the likes of Suede in the charts and on the radio. When Liz Phair’s audacious double-album debut Exile in Guyville smashed the glass ceiling in 1993, it was an invitation to women with volatile emotions and big ideas.

Harvey, for her part, refuses to be defined as the yearning, abandoned lover who can’t compete with the sleek, ergonomic design of her paramour’s motorcycle – I fuckin’ hate / His motorbike” she sneers on M-Bike. But on Yuri-G, she sings of an otherworldly woman by whom she’s completely sexually intoxicated – “I’d give just everything / she’s got me so mesmerised / I wish I was Yuri-G / it’s just the things that she does to me”.

It’s a truth rarely admitted that sometimes women love one another so wholly that the line between friendship, sexual magnetism, protectiveness and dependence blurs at its conventional edges.

Harvey does that throughout 4-Track Demos – blurs the edges. She’s almost violent in tearing down the walls between the personal and political. On Easy, she confronts the savage labelling of women deemed promiscuous. “You’re giving me no leeway / I opened once and you called me devil’s gateway,” she laments, before hollering, “Eaaaaasssy / Eaaaassssy”.

In the mid-1990s, Harvey’s music resonated with women exhausted by having to demand equality and having their voices drowned out by droll, long-haired, grungy male festival line-ups and record label suits with dollar signs in their eyes. 4-Track Demos resonates now too – so real and urgent, candid and unvarnished that Harvey’s lips almost seem to brush your ear through the headphones. Let this album reveal its long snake moan to you, for the first time, or all over again.

Bob Dylan blames vertigo and COVID protocols for autopen fiasco: “Using a machine was an error in judgment”