The Genius Of… Bricks Are Heavy by L7

Bricks are heavy – and so are L7. Three decades after its release, the band’s third record remains an essential slab of hooky, women-centred grunge.

LA-founded hard-rock hellraisers L7 preceded the grunge and riot grrrl movements, and fought against being pigeonholed as an ‘all-girl band’. Decades later, though, they’re still lazily lumped in with these scenes and still labelled as such. So, in tribute to L7 and their savage 1992 album Bricks Are Heavy, we’re going to right that wrong and convince you to put it in heavy rotation.

L7 defied the burn-hard/burn-out existence of many bands that thrived during the early 1990s punk, grunge and hardcore scenes, some of whom didn’t make it out. Though there was a 13-year break between 2001 and L7’s reformation in 2014, Donita Sparks, Suzi Gardner, Jennifer Finch and Demetra Plakas have – aside from a few line-up changes – very much gone the distance.

The band’s smash-hit Pretend We’re Dead arrived in 1992. As L7’s first single to hit the mainstream charts, it leveraged their third album, Bricks Are Heavy, among the squares yet to latch onto grunge. Anyone recall that term? ‘Square’ was slang for ‘nerd’, ‘dork’, or ‘loser’ and, symbolically, that’s what ‘L7’ means too – extend your thumb and first finger into an L-shape and you’ll get the gist.

Bricks Are Heavy was L7’s strongest statement to date about their influences: the dirty jeans and surfer-punk of Ramones; the unforgiving riffs and aggressive noise inherent to Black Flag; the melodic, often melancholic doo wop of 1950s and 1960s grandstand bands; art-school dropouts who teach themselves to play out-of-tune guitars – it’s all here.

Back in 1985, Sparks, a songwriter and singer, and Gardner, a writer, singer and poet, were hanging out in the same Echo Park community of rebel artists, writers and musicians, with both having at one point worked in production at newspaper LA Weekly. They were connected by mutual friends, and Sparks’ early demo tapes convinced Gardner that they were riding the same wave of music.

Soon they’d ride it onto the stages of LA’s burgeoning punk and hardcore venues, where the duo experimented with a shifting line-up. Things were solidified in the mid-1980s with the addition of bassist Jennifer Finch and drummer Roy Koutsky. L7’s self-titled debut followed in 1988, before Koutsky quit. Anne Anderson then joined as a touring drummer before being replaced by self-taught Chicago-born punk Dee Plakas, plucked by L7 from her LA trio Pirate Radio. 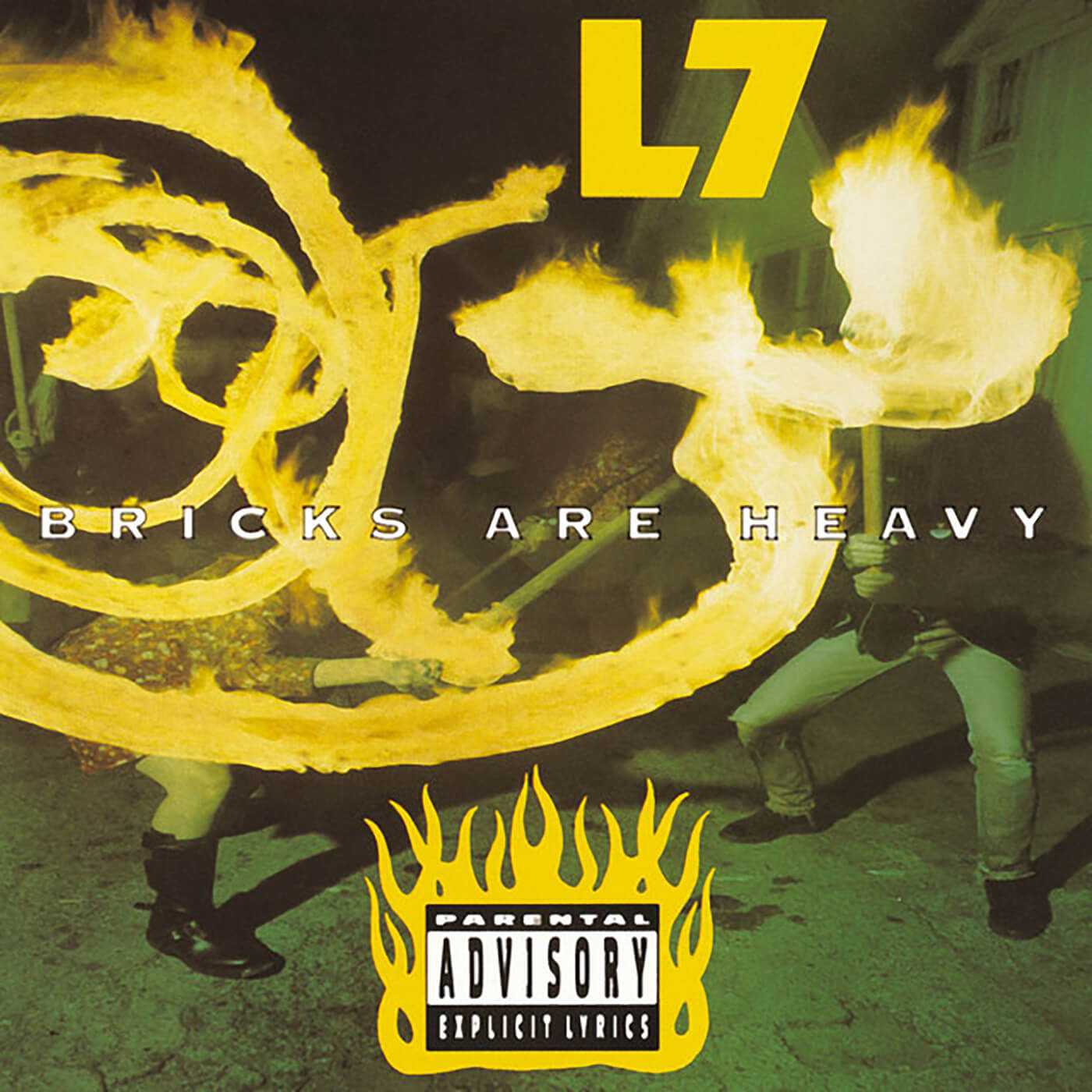 Determined to pummel, thrash and throttle alongside her equally fierce bandmates, Plakas was the spark to the fuse. Everyone in the band now rightfully saw L7 as a job, and had the stamina and passion to make it work.

L7’s second album Smell the Magic arrived in 1990, produced by Jack Endino. But it was their third effort, 1992’s Bricks Are Heavy, that would really make an impact. Their debut album came through Epitaph, run by Brett Gurewitz of Bad Religion, and Smell the Magic through Sub Pop. For their third, L7 signed with Slash, knowing that the label had international distribution beyond the US and Europe and could introduce the band to Asia and Australia.

The production was much improved too. Having helmed Nirvana’s diamond-selling Nevermind and The Smashing Pumpkins’ quiet achiever Gish in 1991, producer Butch Vig – later of Garbage – helped refine the raw edge of these self-taught DIY punks let loose in the studio. Using double-tracking and overdubs and casting a sharp eye on the mix, the producer was pioneering in bringing a romantic, almost spiritual intricacy to the recordings.

Vig also recognised Sparks’ vocal prowess. The Chicago-born singer could do everything from low-octave, deep-set melodic drawls to hoary snarls and punchy punk-style one-liners that hit like a kick to the eardrums. Dare we compare her voice to that of Ozzy Osbourne? Sparks wields that same droll, dark quality as the Prince of Darkness, just in the genre next door.

Even 30 years after its release, Sparks’ lyrics still rage true too, mercilessly interrogating topics both personal and political. Opener Wargasm, with its ferocious slab of serrated guitars, thrashing drums, and Sparks’ sombre delivery, still sounds prescient, as it skewers warmongering politicians and the public who cry “crocodile tears for the refugee” and indulge in the relentless media churn of “smutty bloody pictures, ecstasy”.

L7 deliver their catchiest, most timeless hit Pretend We’re Dead with tongue in cheek, as Sparks perhaps lambasts the many ways women are silenced. It might have referenced, for example, the way women were silenced in the hardcore, punk and grunge scenes, required to be complicit in their marketing as sexually appealing cover girls rather than artists in their own right.

The band navigated this vulnerability, as ever, with humility and bleak humour. Pretend We’re Dead has the sort of hooky, 1950s rock’ n’ roll, doo-wop swing of Dion and the Belmonts’ A Teenager in Love. Sparks, a fan of Archies comics and 1960s pop, was torn between her love of pop culture, the desire for a hit song, and the fragile nature of cred in the rock scene.

“Of course we wanted a hit, but when you get a hit, if you’re from the underground, you get almost embarrassed about your hit,” she told Spin in 2012. “It’s so fucked up. All of a sudden, it starts to separate you from the scene that you came from.”

Sparks explained L7’s break-up in 2001 as a time when she and Gardner were eyeing their 40th birthdays and had no material achievements to show for all their sweat and tears: no fancy homes, cars or the trophies. Now eyeing her 60th birthday, Sparks is still touring, still creating, and still bitching about the state of play for women and artists in a greedy, misogynist world. Thirty years after its release, a full-length live performance of Bricks Are Heavy may not solve the world’s problems, but it still writhes, thrashes, hisses and wails as profoundly as it did in 1992. Long live L7.