The Genius of… Futures by Jimmy Eat World

As the emo heroes prepare to livestream a track-by-track run-through of this follow up to Bleed American, we swim in the waters of an expansive, emotional record that frontman Jim Adkins describes as being from their “more is more period”

Up to the gil

Jimmy Eat World went from niche emo darlings to riding the turn-of-the-century pop-punk wave when they released their 2001 album Bleed American. Short, sharp, catchy rockers such as The Middle and Sweetness catapulted them onto mainstream radio and arena tours with Green Day, while retaining the emotional punch of the band’s earlier work. But after two years on the road drinking in that success, the band returned to the studio with the intention to make something darker and more widescreen, both in scope and sound.

Initially the band hooked up with Mark Trombino, the producer of all three of their major label albums thus far, but when they felt they needed more time and Trombino didn’t have it, the band ditched an album’s worth of sessions, and eventually turned to Gil Norton, who had previously had success with Pixies and Foo Fighters among others.

Norton helped to beef up the band’s sound, but also to expand it and get them thinking about how to link elements of the songs together. “Everybody has a slightly different take on what they like to hear and how they like to get there,” Jim Adkins told Arizona Central, “and Gil was really into the details of things. He made us focus on the getting into and out of different sections of songs – a level of detail that we hadn’t considered before.”

Already keen to build on the stripped back instrumentation of Bleed American, and to bridge the gap between the pop nouse of that record and the more intricate musicality of its predecessor Clarity, working with Norton gave the band license to do just that.

The album kicks off with a power punch from the title track, with guitarists Jim Adkins and Tom Linton harmonising riffs on what were most likely twin Les Pauls at the time (Adkins now has a signature Fender Thinline Tele, while Linton favours a Gibson SG) as the drums drive the song towards a chorus in half time that opens things wide, sonically, laying the ground for the picked arpeggios after the second chorus before the song rebuilds.

Just Tonight works in a similar vein, nodding back to Bleed American, but where that album featured classic quite/loud verse/chorus dynamics, Just Tonight hits hard throughout as Adkins vocals lead us into doing something we know we shouldn’t because we just can’t help it. It’s a theme that returns as the album slows down and expands sonically through the double-header of Work and Kill.

Liz Phair adds vocals to the former, which builds in the key of F minor towards a Linton solo (more of which to come), a breakdown and then a high-octane conclusion. Norton’s work with the Foo Fighters is audible here. Kill starts acoustically, before what sounds like a tremolo’d electric chimes in in the background. We’re in B here, with the strings tuned down half a step (Adkins and Linton both have specific guitars for live work permanently tuned down this way due to the fact that Kill is far from the only song in the JEW catalogue to feature this tuning!), and the music again builds to a crescendo to match the bursting emotion of the lyrics. It is one of the band’s best songs. 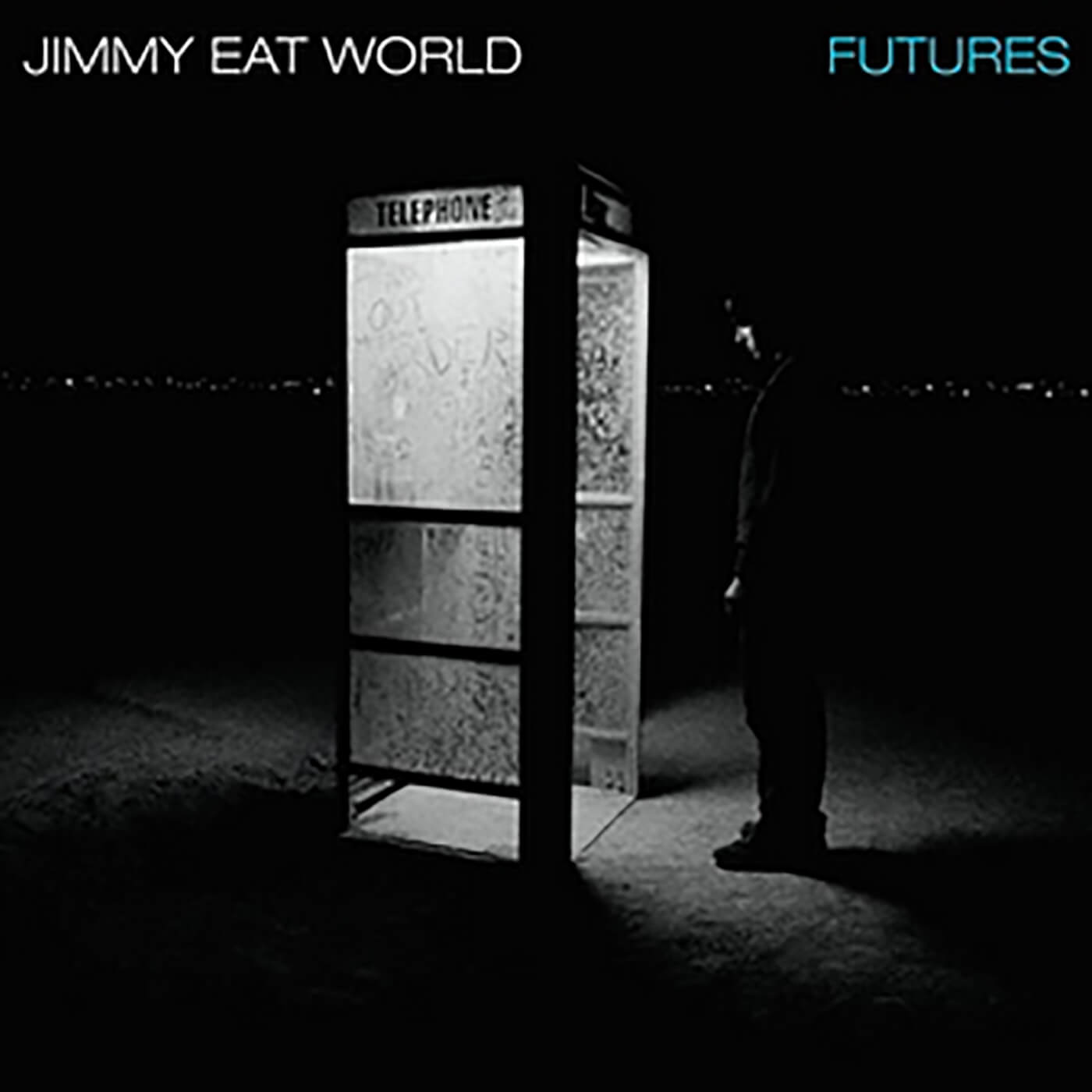 After The World You Love, the album’s lead single – and perhaps its centrepiece – Pain hits like a train, a gnarly rock song in dropped-D tuning that sees Adkins punch equally hard with his lyrics: “It’s a lie/A kiss with open eyes”.

From here the album turns, and its ambition expands even further, as do the songs both in length and sonic scope. Drugs Or Me is a guitar and piano-based lament over a friendship being lost to addiction. But where that could suggest a clean-sounding ballad, here the background guitar parts are distorted and scratchy, lending a dissonance to the music in line with the song’s sentiment. Polaris has been compared to U2 too many times for us to do it again, but the influence is there. Another song tuned down a half-step, and written in the ‘emo-friendly’ key of B♭ major, Polaris features an acoustic part alongside the twin guitars of Linton and Adkins to fill things out even more. Another recurring theme of Futures is the use of either a drone note, or a looped, repeated guitar pattern playing behind the melody, and Polaris uses this to stunning effect with a heartbreaking arpeggio ‘riff’ guiding us through a song seemingly about love’s inability to withstand the life of a touring musician.

Nothingwrong is this album’s most Bleed American moment, before things are brought to a conclusion with Night Drive and 23, two slow burners that pack serious punch. 23, in particular, is a piece of music that can make time stand still for its seven-minute-plus duration. Jimmy Eat World have always known how to close out an album – see Clarity’s 16-minute opus Goodbye Sky Harbour and even Bleed American’s My Sundown – but with 23 they produced one of the great final tracks of any album by any band. Electric and acoustic guitars are accompanied by a string arrangement to build from the delicately picked opening riff around B, D, A and D notes on the A to B strings (a riff that again continues throughout the track, wherever the other guitar tracks take us) to a colossal closing chorus.

The powerful string part is uncredited on the album itself, but it seems that with a half-hour of studio time left with David Campbell and the musicians they’d bought in to do strings for Drugs Or Me, they decided to transcribe a synthesiser part from 23 to see how it worked with strings. The musicians played the part on the spot, and the rest is history.

Linton takes up solo duties again with an intro solo repeated at the end of each chorus, and a longer improvisation after the second chorus that really drives the song towards its and the album’s conclusion.

Futures was not an easy album for Jimmy Eat World to make, and ironically some good songs were forever lost along the way, with the rocky Jen and epic Coming Home not making the transition from Trombino sessions to the finished Norton release (although the latter did at least resurface on 2005’s Stay On My Side Tonight EP as Disintegration). But no matter the quality of those songs, neither would have lifted the level of Futures as a coherent whole. The record is an emotional tour de force, employing what Adkins called a “more is more” approach not to bury the songs in overproduction but to give them the space and sense of grandeur that they warrant. The demo versions of these tracks issued by the band illustrate what a different – and lesser –beast a stripped-back Futures would have been.

For more information check out jimmyeatworld.com.