Eye-catching cabinets and a unique vibe have seen this LA amp company generate the right kind of buzz among A-list players. We saddle up the Crazy Horse… 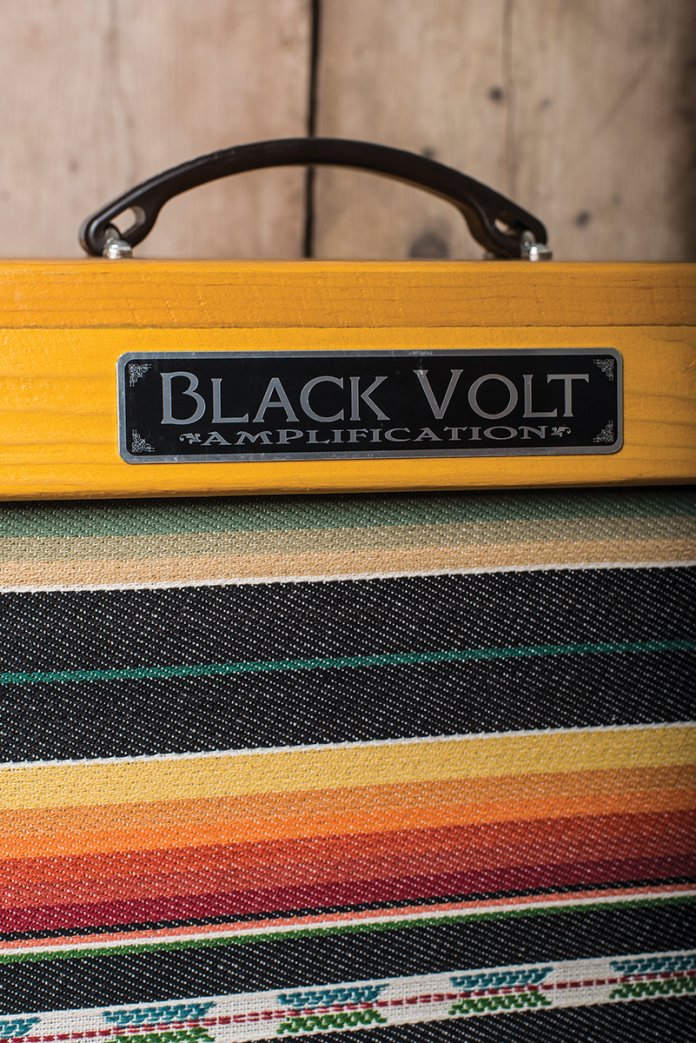 The design, materials and technology utilised by Black Volt Amplification embrace the reclaimed and recycled aesthetic, yet although this model’s name references Canada’s most road-worn guitar hero, the Crazy Horse is not a 5E3 Deluxe clone. The Hammond transformers are bought in, but almost everything else about this striking amplifier appears bespoke.

Starting with the cabinet, it’s made from reclaimed pine boards and the corners are mitre-jointed with oak splines for added strength. Despite the cabinet’s generous dimensions, our Crazy Horse comes loaded with a single 10-inch Eminence Ragin Cajun speaker. With a sensitivity rating of 100.5dB, it’s no shrinking violet, but a 12-inch option is also available.

If the boards are a nod to vintage Americana then the Old West picture is completed by the Navajo blanket that serves as a speaker cloth. The cab back is left open for easy access and the folded metal chassis has been treated to appear brown with rust – as if it has been marinating in a corner of a barn for decades. 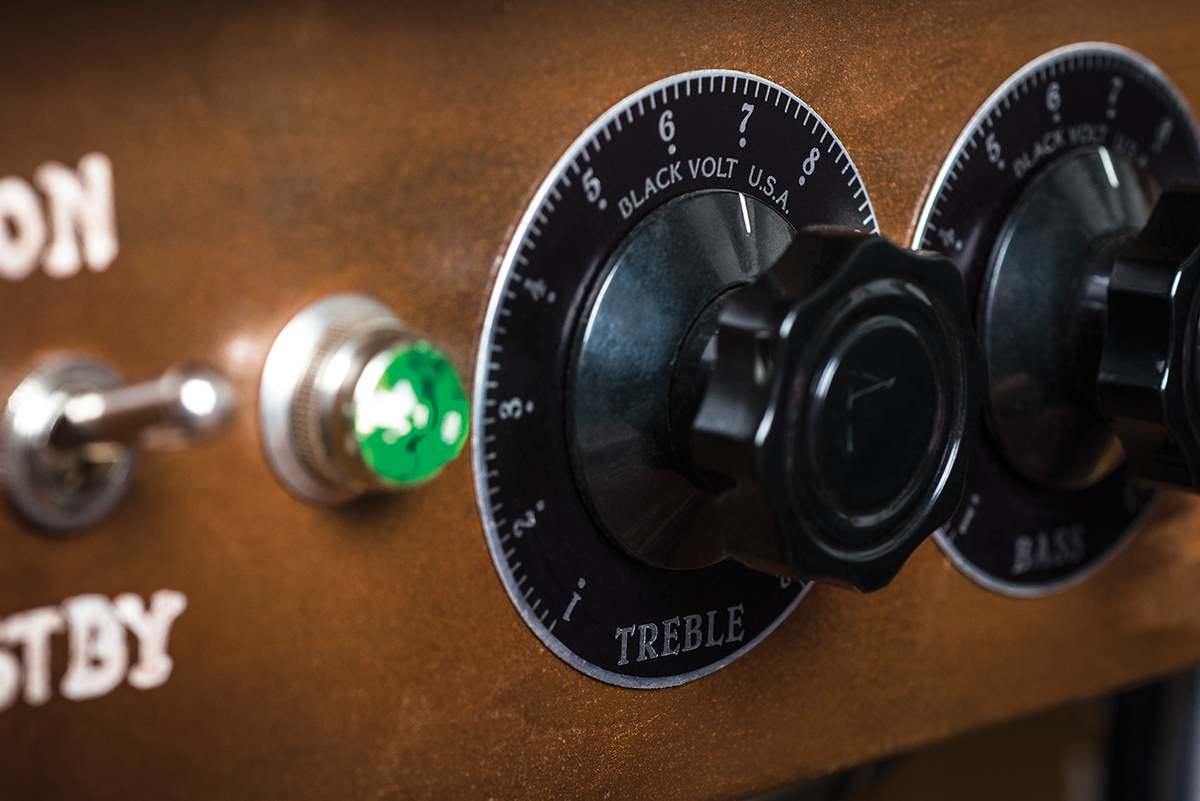 Three enormous control knobs are mounted on metal dials that each go to 12 and are labelled treble, bass and volume. Together they look like something from a WWII submarine or a deranged scientist’s laboratory. The standby switch seems surprising until you notice the absence of a rectifier valve. Like the power switch and fuse holder, it’s hand-labelled with white paint – matching the writing on the inside cabinet wall that gives the model designation and serial number.

A single input leads to two nine-pin preamp valves. V1 is an ECC83S and V2 is a long plate ECC803S that promises deep and tight lows with thicker and more complex midrange than a regular ECC83. Both are JJ branded, just like the cathode-biased 6V6 power valves.
Black Volt advises that both preamp valves can be swapped for the usual pin compatible alternatives and the power section can run 6L6s, with no need to re-bias if increased clean headroom is desired. For the purposes of this review we’re also trying out the Crazy Horse in conjunction with the company’s Maple Fuzz stompbox. 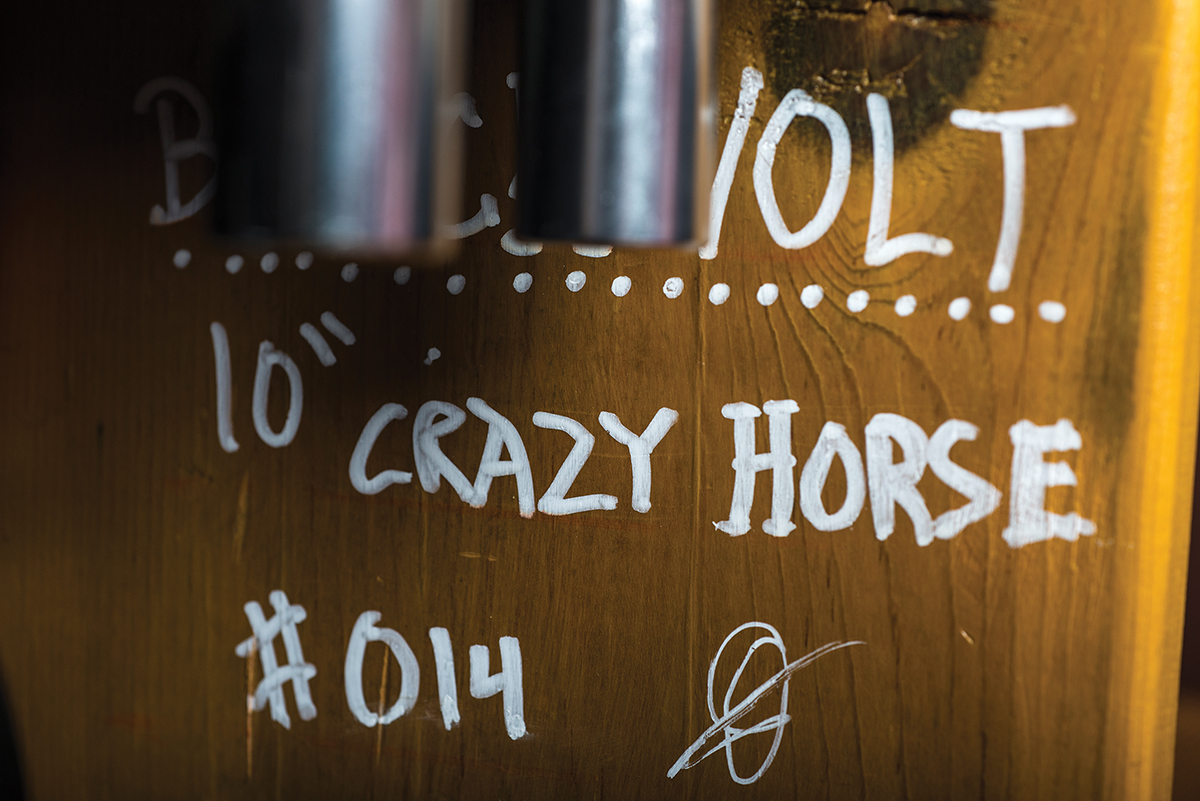 We can’t resist the temptation to plug in the big orange Gretsch and kick into Cortez mode, but initially at least, the Crazy Horse sounds less loco than we expected. Vintage Gretsches are quirky beasts so we swap over to a Telecaster and things improve… dramatically. The Crazy Horse is immediately transformed, and it’s into something that perhaps more closely resembles the dark sparkle of a 1950s Gibson amp circuit than a late 50s Fender tweed.

Without being edgy or harsh, the Crazy Horse achieves amazing clarity, but better still it enhances the most likeable aspects of our test guitar’s tone and accentuates differences between pickups. The same thing happens when we change over to a Les Paul and despite the vastly different timbre of these two guitars, we feel no need to adjust the treble and bass controls. 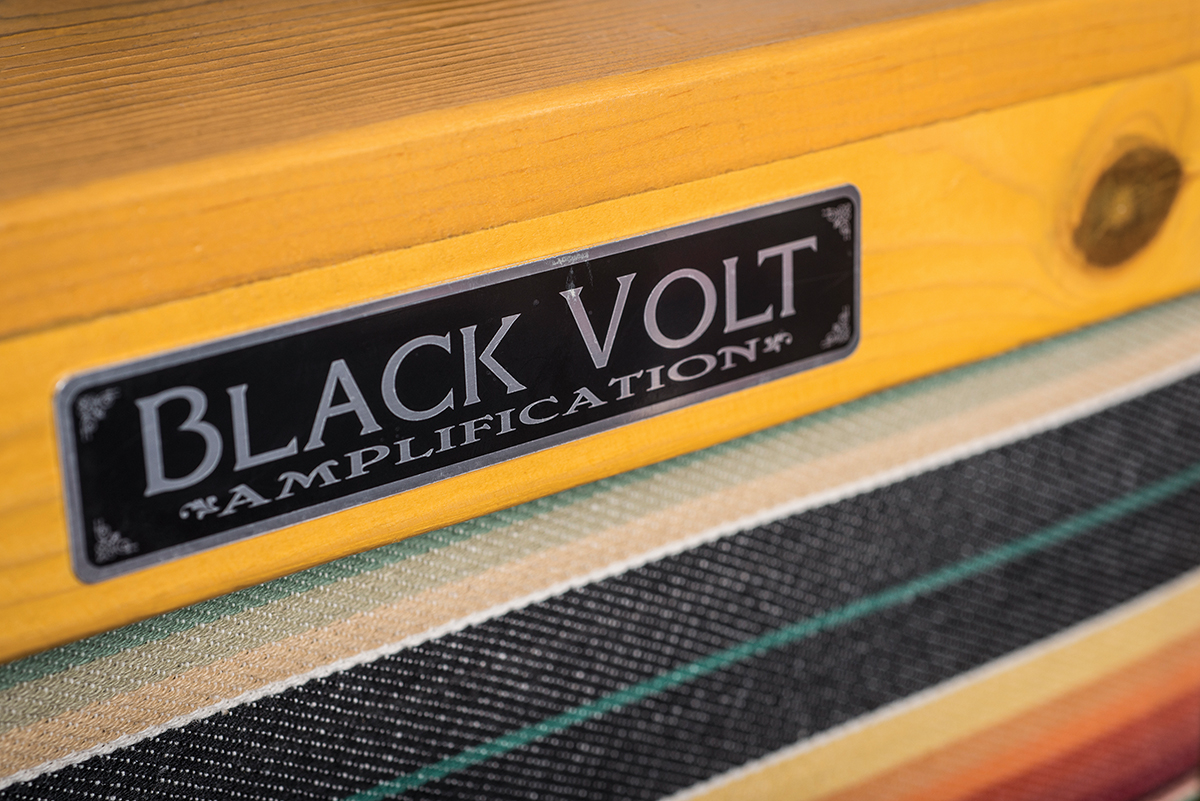 Guitars that normally clean up without significant treble loss do sound darker than usual with the volume notched back – we conclude that the front end needs a certain level of input signal to work with, and while Fender- and Gibson-style pickups can oblige, lower output pickups such as Filter’Trons are less of a good match for the amplifier. This could be where the Maple Fuzz comes in – but more of that later.

Without the pedal, the Crazy Horse has an outstanding overdrive characteristic that sounds like it’s centred in the upper midrange and layered over cleaner frequency bands either side. It manages to be both gritty and smooth with the discernible horn-like bark we hear in vintage Gibson circuits. 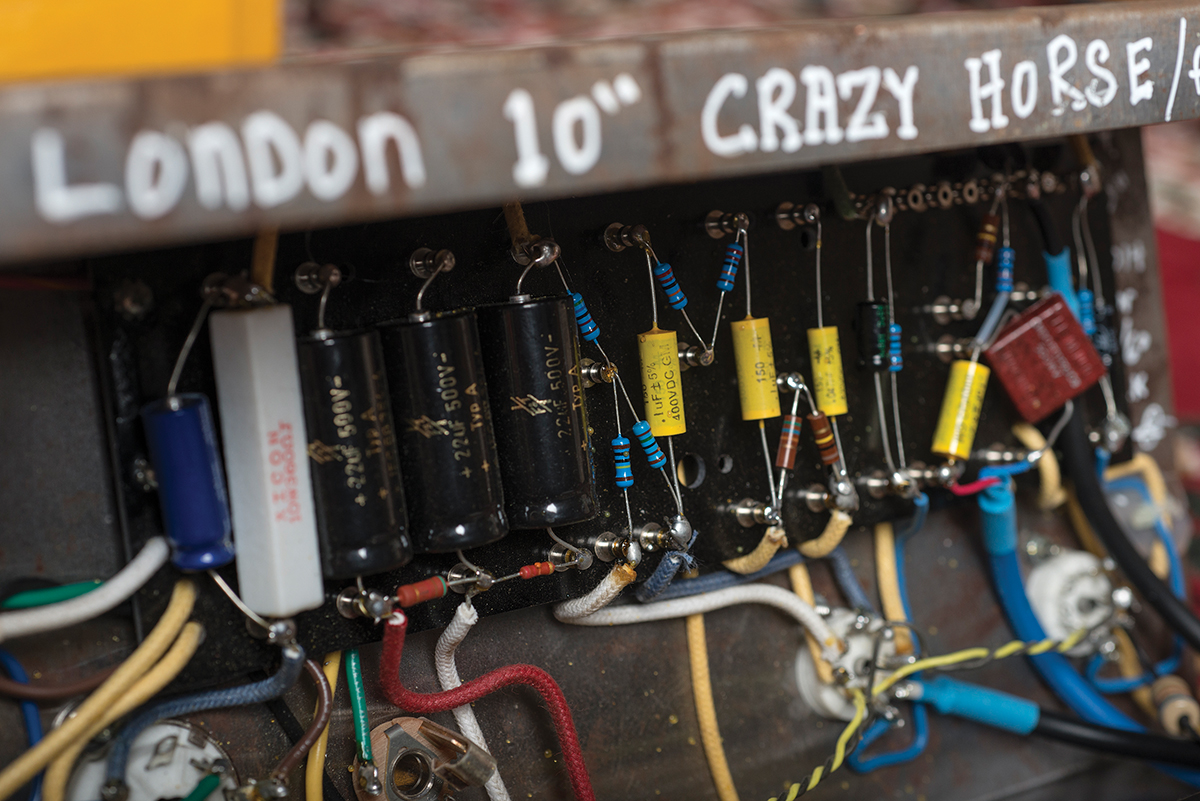 It’s never harsh and even when overdriving near its limit, dynamics remain lively as the compression is largely confined to the overdrive areas. When the Crazy horse is turned up and the speaker and cabinet begin getting involved in tone generation, a pronounced midrange resonance becomes apparent.

It’s a resolutely rootsy and old-school tone that makes you feel so connected with the amp that you may feel compelled to palm the plectrum and start picking with fingers and thumbs. The Crazy Horse cabinet’s roomy proportions are clearly paying dividends – where a smaller cab might deliver boxiness and honk, here the voicing is something to enjoy rather than overcome.

It’s a big, loud sound too; any preconceptions you might have about what a 1×10 combo is capable of should be left at the door, while the wattage on tap means that it’ll deliver in a louder band or bigger room than a 5E3 can cope with.

This 1×10 configuration of the Crazy Horse isn’t an especially versatile amp – the volume and tone controls don’t offer much interaction and the bass and treble controls are more refined than radical in operation – but instead you get a top-notch core tone that can be subtly sculpted and a gain range that goes from the prettiest cleans to rich overdrive. It stops well short of cranked 5E3 ferocity, but that’s what the Maple Fuzz is for. 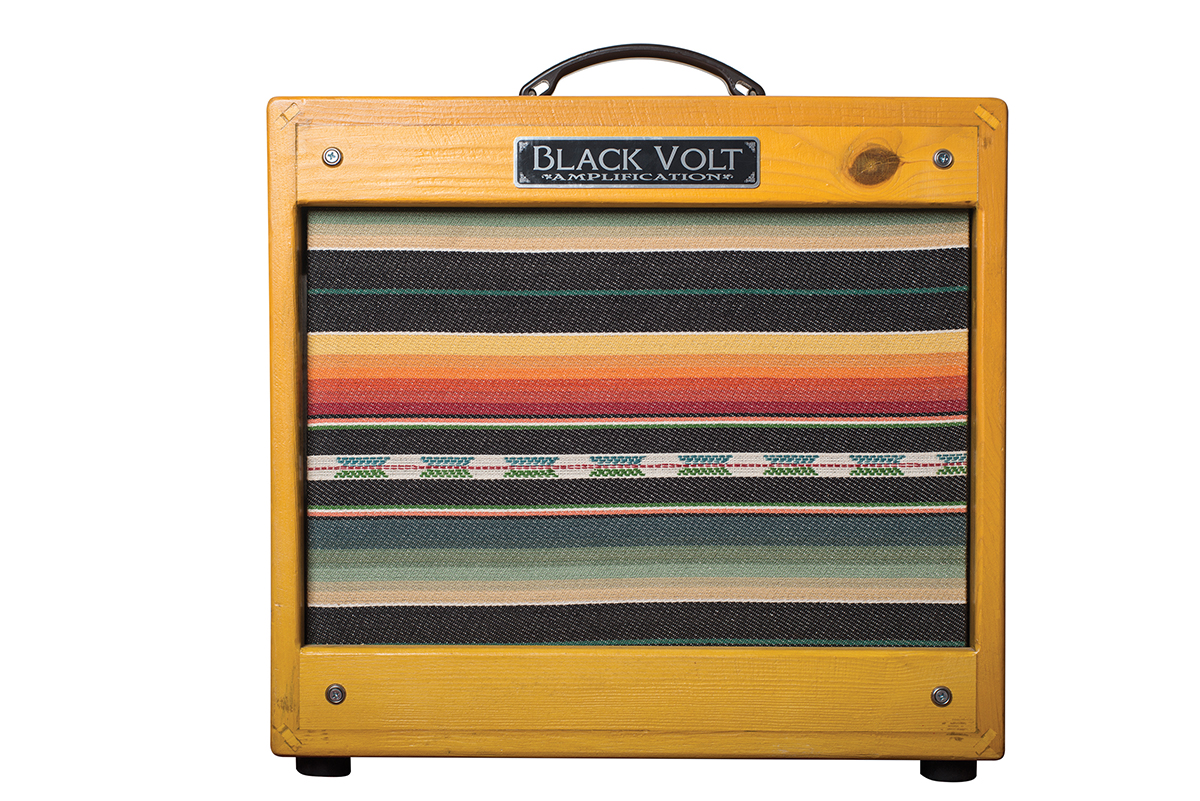 Engage the footswitch on the pedal’s attractive maple enclosure and excoriating overdrive, bass sag, splatty breakup, an ultra-wide gain range and effortless sustain suddenly appear. Crank the fuzz and the volume, then you can clean up Fuzz Face-style while retaining clarity. The bias control is very sensitive and eases the decay from smooth and syrupy to dying battery-style splatter, while the Fat/Thin switch tightens the lows. The tone control is something of an oddity, because it acts as a second volume control.

We love the Crazy Horse’s complex clean tones and it’s smooth and refined breakup. Despite, or perhaps because of the circuit’s treble and bass controls, it’s not as versatile, gainy or sonically extreme as a similarly sized tweed combo without stompbox assistance. Nevertheless, it’s certainly more practical in bigger rooms and it’s an interesting and lovingly crafted amp that does what it does extremely well. 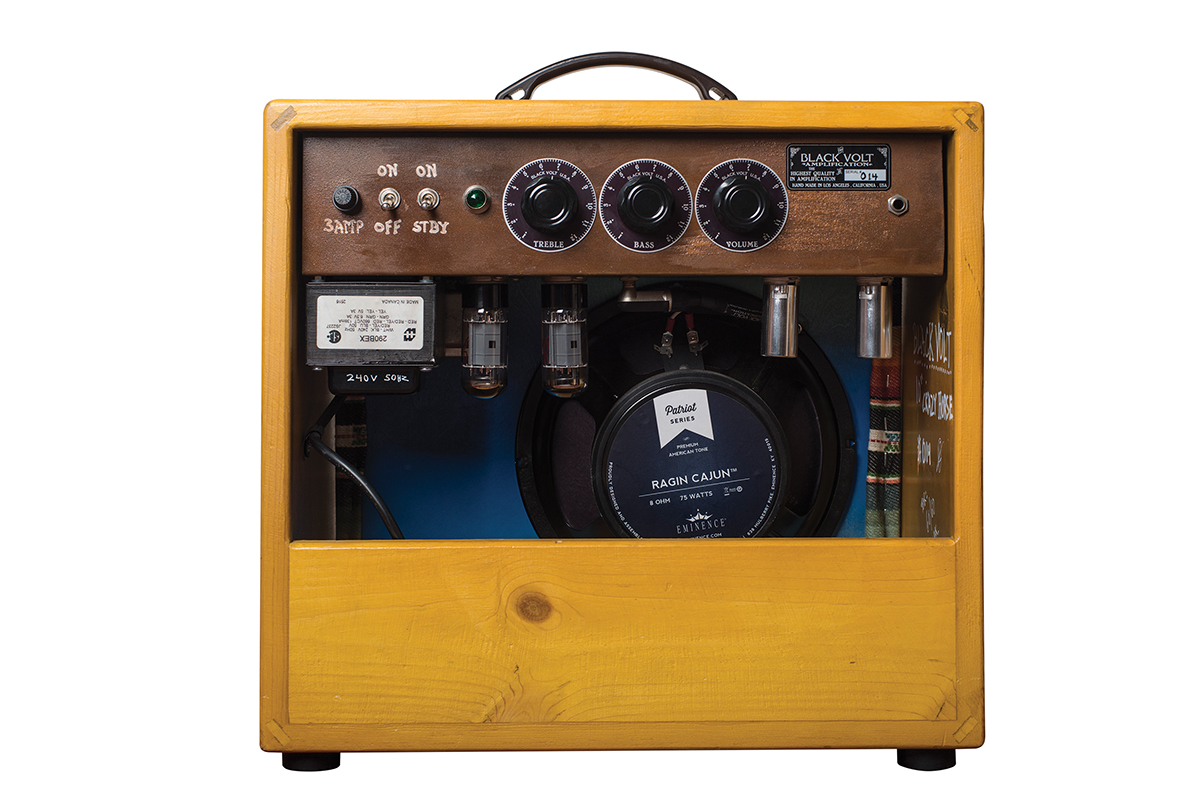 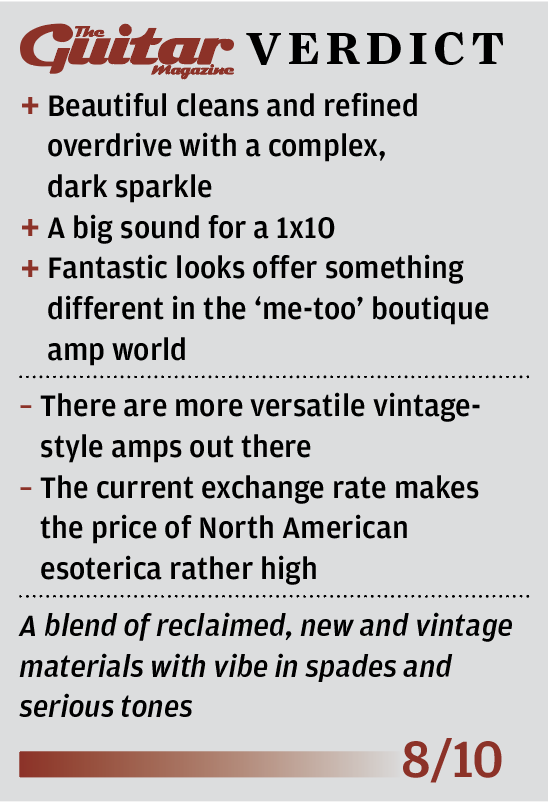