Northampton’s finest celebrates a decade in the game with an affordable combo inspired by the class of 2008. 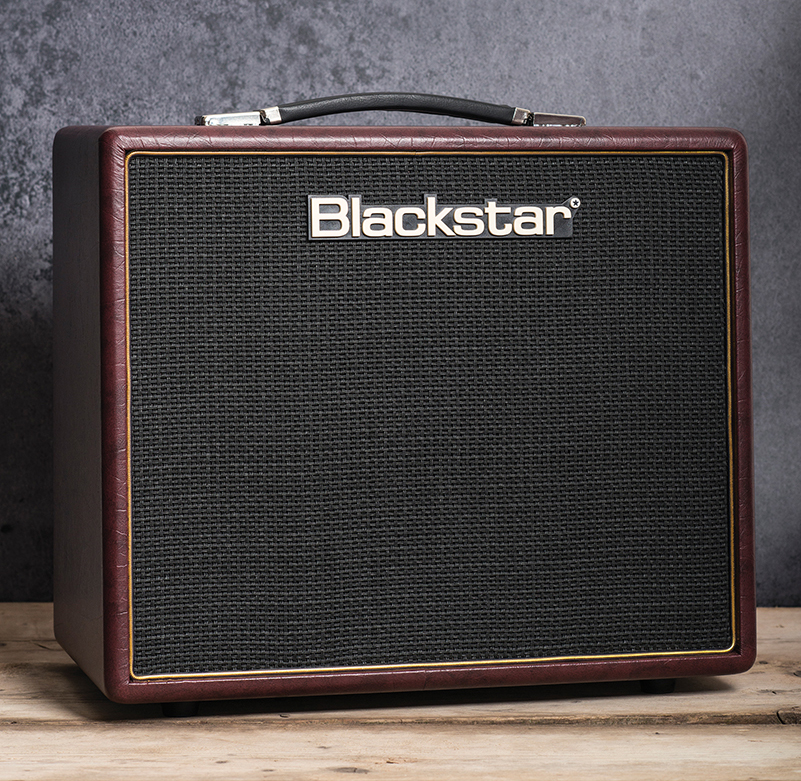 Last year saw Blackstar Amplification celebrate 10 years since its launch at Musikmesse 2007 in Frankfurt. During that time, Blackstar has gone from garden shed R&D to household name status in the guitar world, but the rich maroon vinyl covering on this 10th Anniversary combo harks back to the amplifiers that started it all for the Northampton-based company.

Designed in the UK by Ian Robinson and Bruce Keir, the original Blackstar Artisan models were launched to universal acclaim a little over decade ago. Despite offering beautiful tones and boutique stylings inside and out, Korean manufacture allowed the Artisans to hit the streets at price points that were extremely competitive. 10 years on, the hand-wired Artisan 15, 30 and 100 models are still available and now made in China to the same exacting specifications. 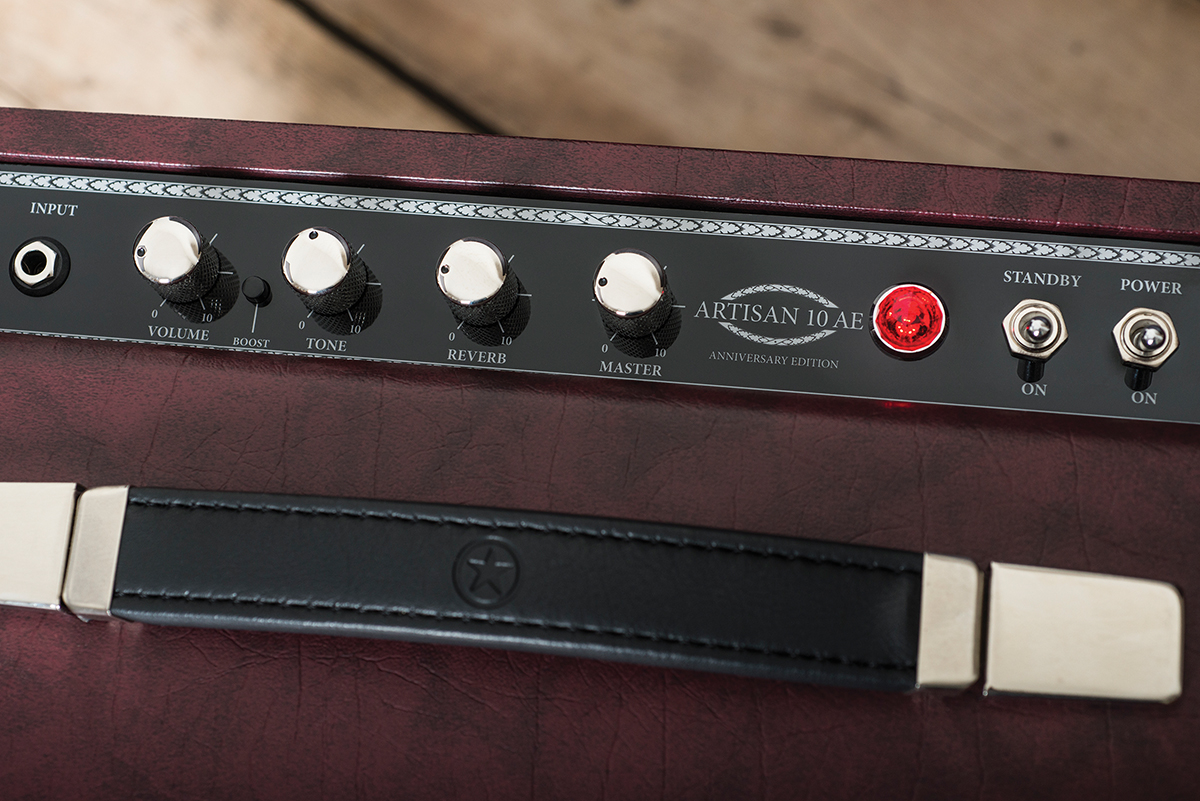 Part of a trio of affordable 10th Anniversary models (see p92 for information on the other two), the Artisan 10 AE combo swaps tagboard for pin-sharp PCBs and birch ply for MDF but retains the elegant simplicity of its high-end forebears. The smart gloss-black, top-mounted control panel is home to just four main controls: volume, tone, reverb level and master. The single-ended circuit employs an ECC83/12AX7 in the preamp and an EL34 in the power amp, while a boost switch (engaged either via the control panel or supplied footswitch) adds an additional gain stage into the mix.

Around the back, a trio of speaker outputs facilitates the connection of the internal 16-ohm Celestion Seventy 80 loudspeaker and/or a variety of eight- and 16-ohm extension cabinets. There’s also a speaker-emulated output that doubles as a headphone out. For silent practice or recording, the emulated output still functions when you switch the amplifier into standby mode. 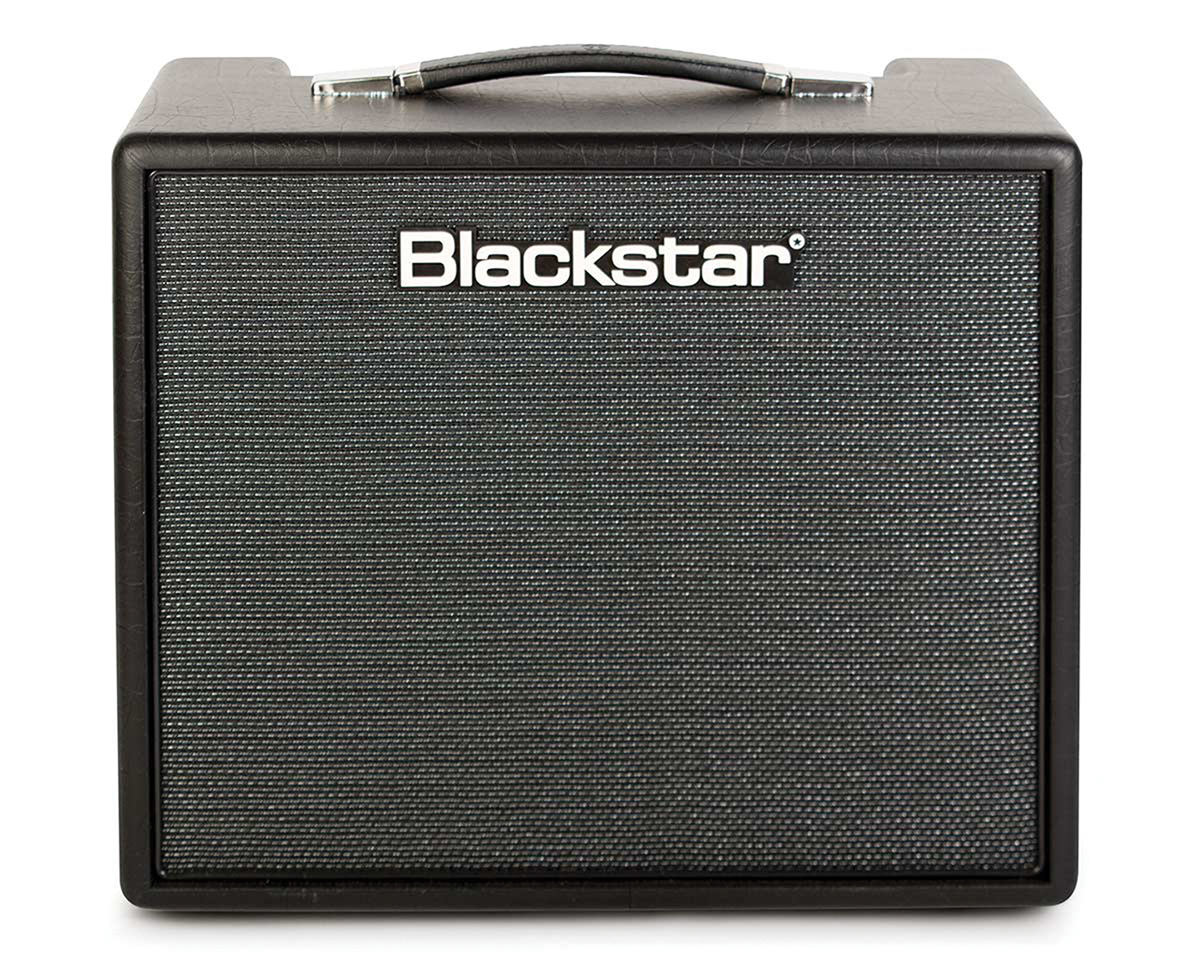 The Artisan 10 AE is joined in Blackstar’s 10th Anniversary series by two other compact 10-watt combos drawing on inspiration from the Artist and Series One ranges. The Artist 10 AE features a 6L6 output valve and an onboard overdrive circuit inspired by Blackstar’s HT-Drive pedal, enabling you to get everything from big-bottle cleans to singing legato lead from one amplifier at volume levels suitable for the home or small stages. 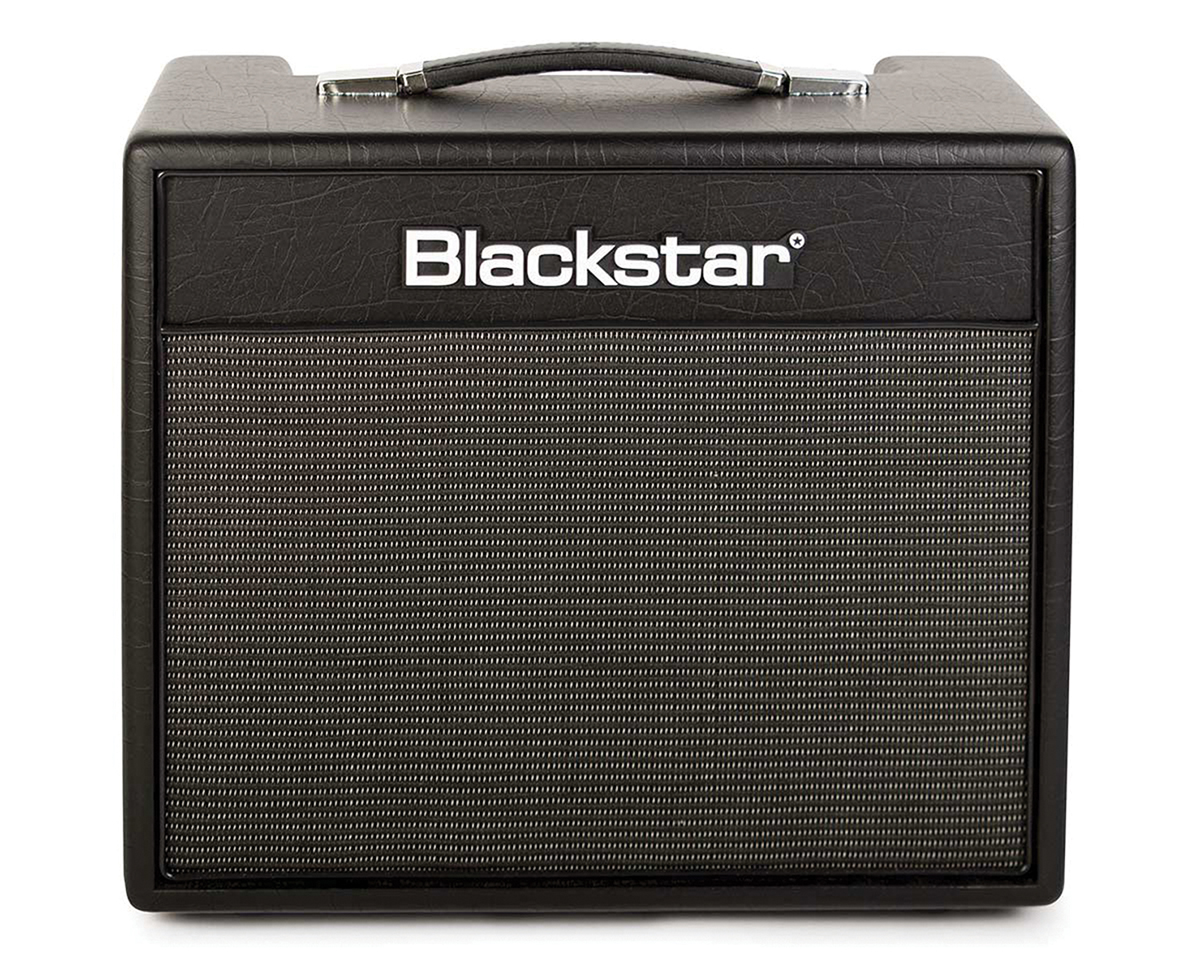 The Series One 10 AE employs a KT-88 power tube and Blackstar’s ISF tone shaping to enable it to deliver tight high-gain drive tones and dynamic, pristine cleans. All three Blackstar 10th Anniversary models retail at a very reasonable £499 and are available now.

Powering up illuminates the large red jewel light, which ties in with the combo’s tasteful retro aesthetic. As is so often the case, the small but considered array of controls on board here can unlock an enormous range of sounds. Set clean, the appropriate adjective is ‘pretty’ – clean tones are smooth but transparent enough to retain the detail and nuances in your instrument and your playing. The onboard digital reverb is subtly voiced and offers a halo of ambience rather than salty splashes of surf – it can get a little hissy when rolled much past noon but with more restrained settings it’s a pleasing effect that would be missed if it wasn’t there. 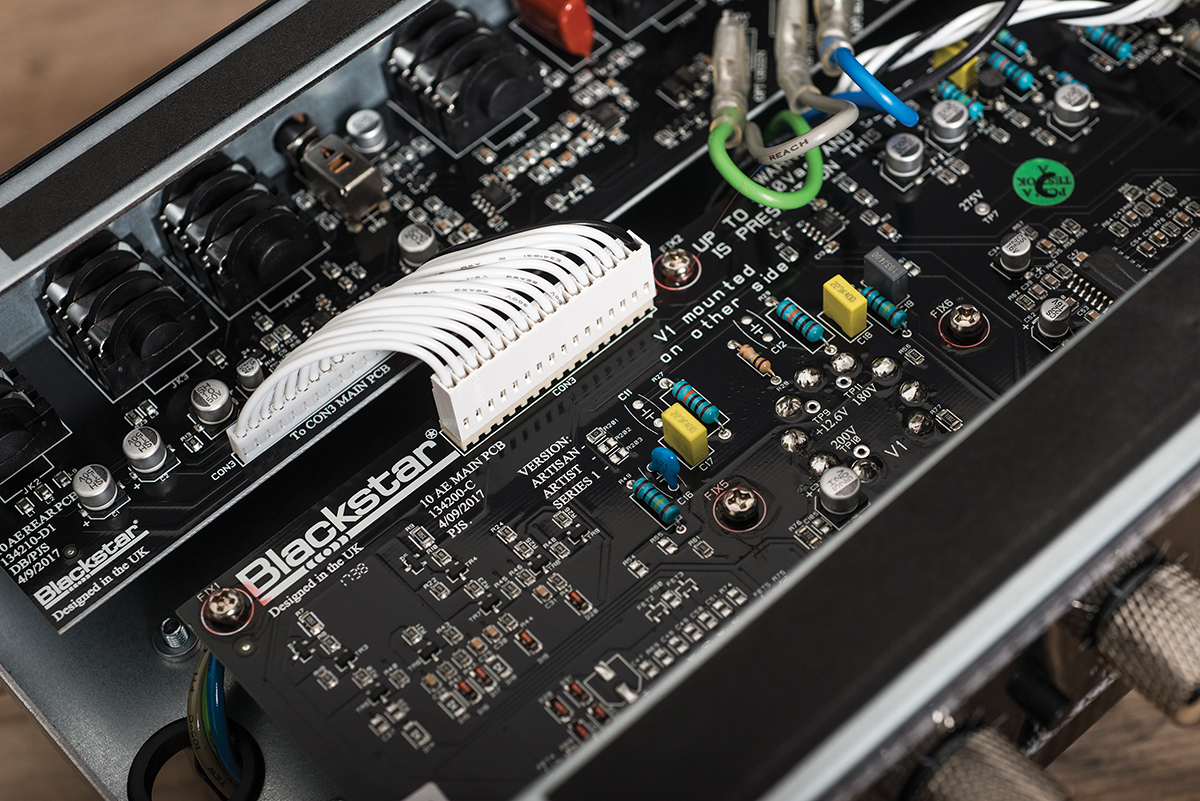 Balancing the relative output levels of the Artisan’s two modes can be a little tricky. When you step on that preamp boost switch you get a generous helping of extra level as well as gain, but there’s so much mileage in this mode that you might not want to switch it off.
With the boost engaged and the volume control rolled back to around 10 to 11 o’clock there’s a tactile, organic raunch that’s bags of fun in combination with a good Strat neck pickup. It’s very Hendrix-y of course, but EL34 power stage notwithstanding, you can dial in satisfying Texas blues tones, too. 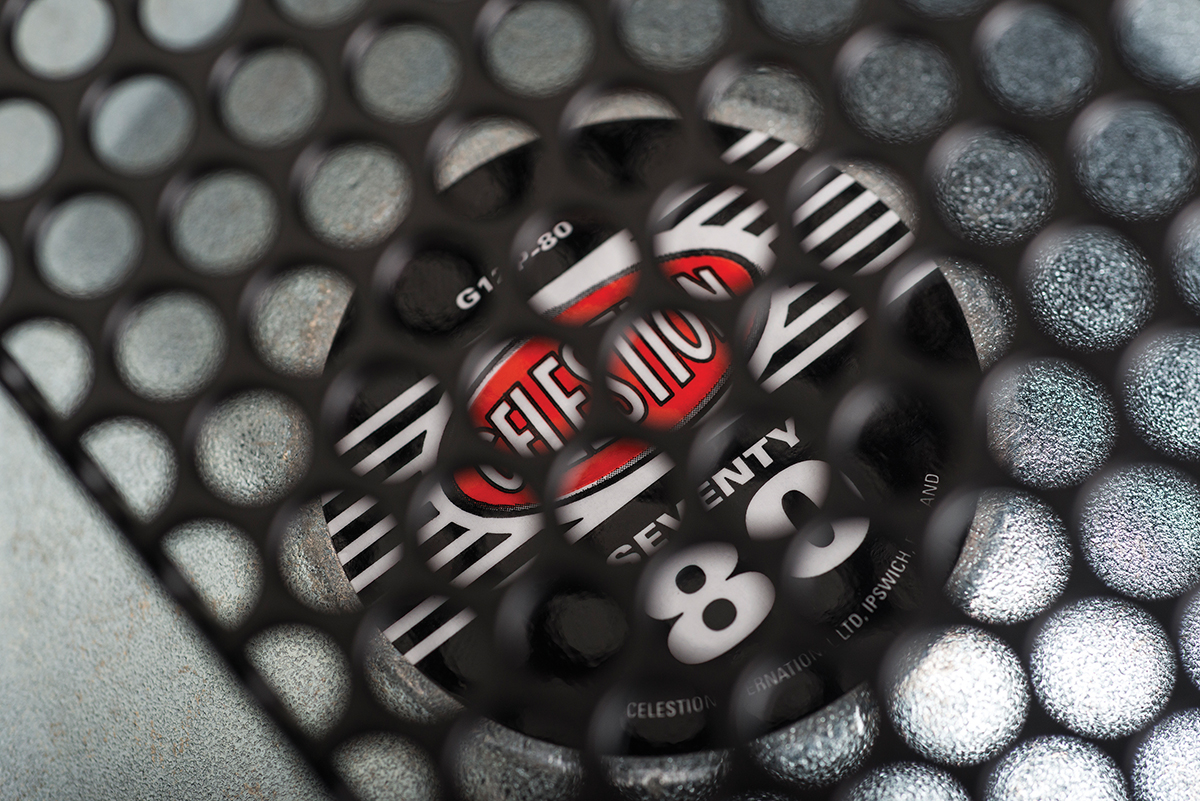 Flip to the bridge pickup with the same amp settings and the Britpop sounds of ’66 and ’96 are at your fingertips. Throw some humbuckers or P-90s into the mix and you’re into classic rock grind, even at very restrained, home-friendly levels on the master volume control. That said, there’s something about this amp makes up keep going back to the Strat – it’s a truly infectious combination, even through headphones. Although in this context the drive tones can be a little coarse, the emulated output’s clean tones are more than sufficient for late-night noodling – the reverb helps soften things up, too.

Thanks to its excellent master volume the Artisan 10AE is effectively two amps in one. If you’re looking for sweet, boutique-style cleans and classic overdriven tones at living room volumes then this is would be a shrewd choice but what makes £499 seem like a serious bargain is the fact that it can also handle stripped-down gigs and rehearsals, and is a versatile weapon in the studio. 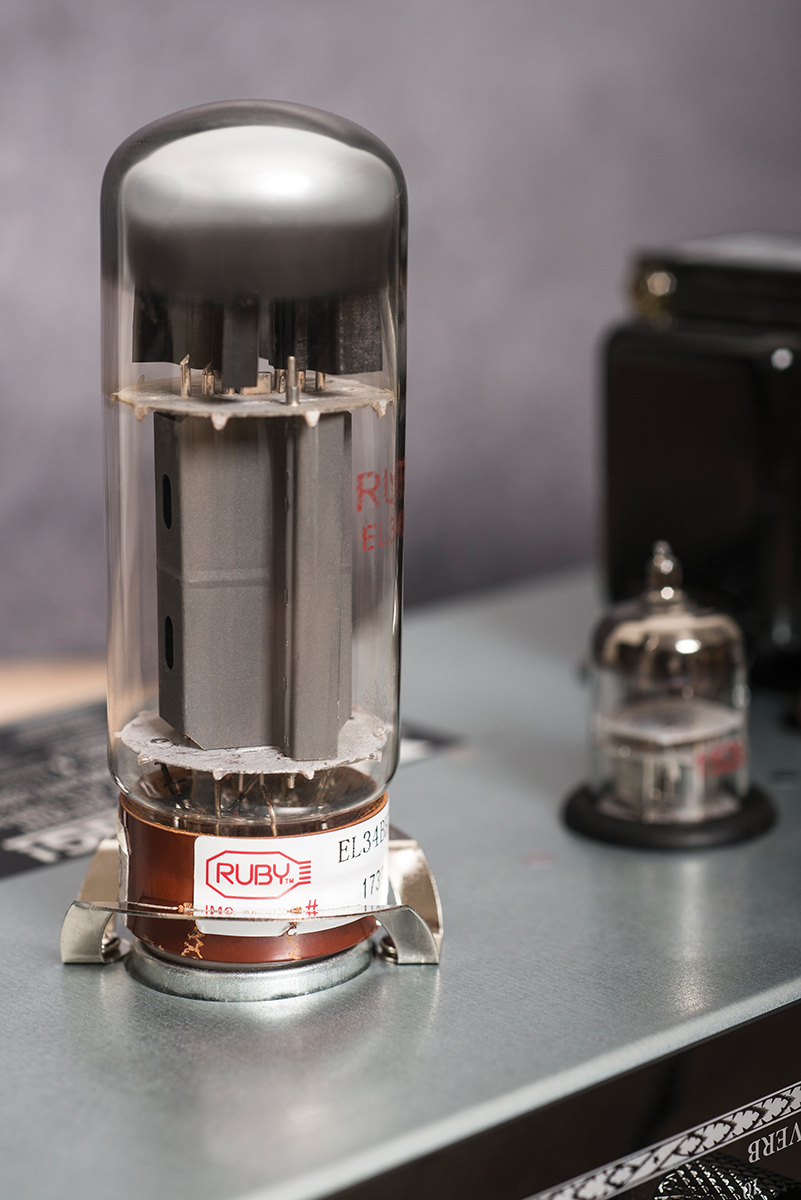