A low-cost, high-quality looper for the performing musician. 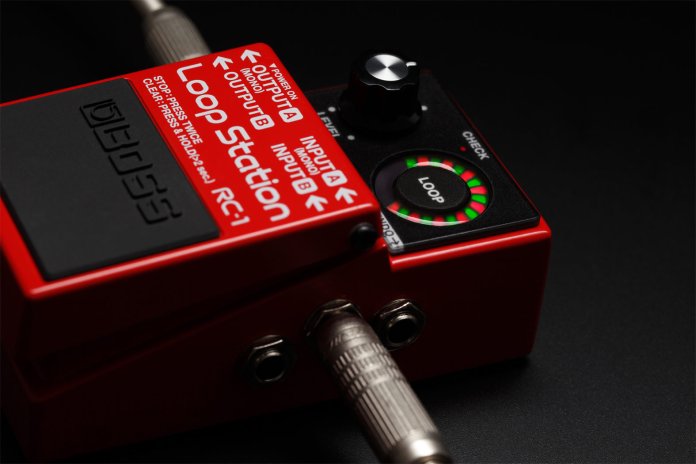 Boss’s new entry-level RC-1 is a triumph of simplicity: the top panel features just a single level control and a multi-segment loop indicator. Don’t be fooled; it’s a powerful tool so once you learn a few basic press, double-press and press-hold operations with the stomp switch you’re off into the world of seamless recording, looping and overdubbing.

As always, construction is robust. Though the `compact’ Boss format looks a little chunky next to some of the micro-pedal designs in vogue at the moment, it’s sometimes helpful to have a bigger target underfoot when timing is critical.

The RC-1 is a stereo looper so naturally you can create loops featuring stereo effects, but it also means that you can synchronise two different instruments and send them out to separate amps or mixer channels: connecting a second source to input B automatically splits the stereo output. Until you do this, a mono signal is presented at both outputs ± very nifty if you want to use two amplifiers, or send a feed to a recorder.

As a junior sibling to the RC-3, the feature set is quite limited: there’s no USB for archiving or downloading audio, no auxiliary input, no rhythm guide, no presets for storing loops (other than the one you’ve just recorded, which remains in the unit’s memory) and just 12 minutes of stereo recording time compared to the RC-3’s 99 presets and massive three-hour storage capacity. As such, this is definitely a tool for the musician who likes to work from the ground up in the live environment, but this simplicity may also appeal to those who just want a neat way to practice soloing over chord patterns.

One innovative feature that the RC-1 has in its favour is the new display. 24 LED segments cycle red when recording, red/green when overdubbing and green when playing back. As soon as you’ve recorded a loop, the overall cycle indicates loop length. This is extremely useful for improvising or people who work with less structured atmospheres or longer loops; knowing exactly where you are in the cycle is brilliant.

In use
The RC-1 sounds great and is really easy to use. The Undo/Redo function is a practical inclusion that will save your bacon sooner or later, and if accessing it via the press/hold method while in overdub mode becomes tedious then you can plug in an additional footswitch for one-touch operation. The unit’s default setting goes straight from record to overdub mode and then play mode ± and there’s a start-up option that changes the overdub/play order if this suits your style better. 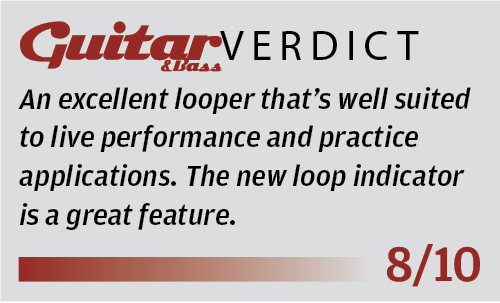