Catalinbread attempts to cram a Fender spring reverb and an Echoplex tape echo into stompbox housings. 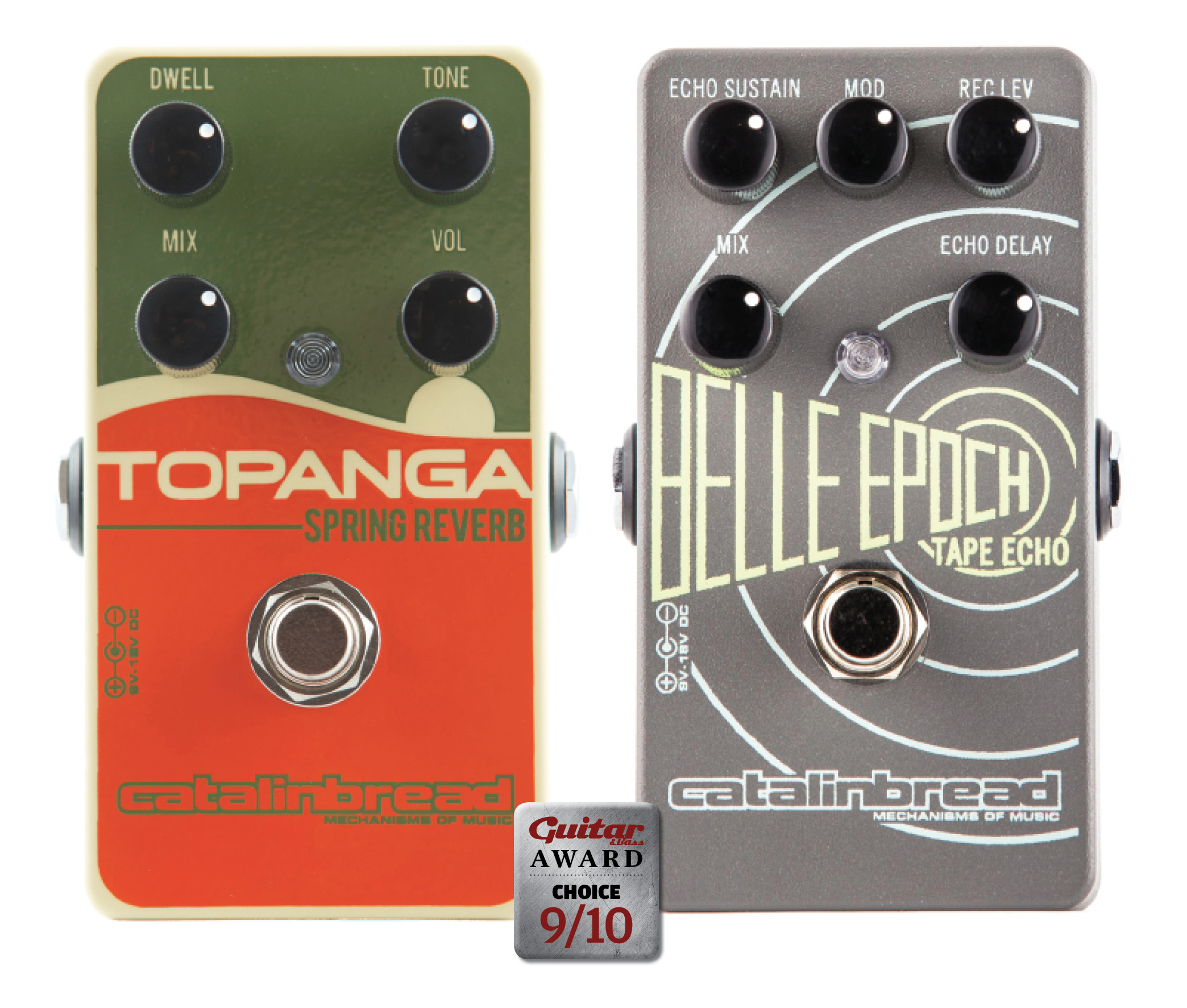 It speaks volumes about electric guitar culture that cutting-edge DSP technology is largely focused on recreating the sounds of decades-old and often obsolete equipment. Interestingly, there has been a split, too. Digital modeling amps have come to be regarded as entry-level products, while DSP-driven effects receive widespread approval from discerning musicians and audio professionals.

Catalinbread is prominent amongst a new breed of pedal manufacturers that combine DSP with an analogue aesthetic. Most DSP pedals are generic tape delay or reverb emulators, but Catalinbread stands out by concentrating on the replication of specific audio classics.
The digital side is confined to tasks it performs best, and Catalinbread replicates discrete analogue circuitry where appropriate. The Topanga and Belle Epoch typify Catalinbread’s approach, so let’s see what they’re all about.

Topanga Spring Reverb
Named after the former Californian canyon home of Neil Young and Charles Manson, the Topanga is a reverb pedal inspired by Fender’s standalone 6G15 spring reverb.
Looking like an amp head, the 6G15 contained three valves and a spring pan. Produced from 1961, it came to be regarded as the reverb for surf and spaghetti, and unlike onboard amp reverbs, the 6G15 was placed in front of the amplifier. Overdriving an amp meant distorting the reverb signal, too.

The 6G15 had three controls ± dwell, mix and tone. Dwell controlled the level of the guitar signal reaching the springs and tone rolled off the treble frequencies. Finally, the balance of the dry and reverb signals was set using the mix control.

Catalinbread has opted for an identical arrangement, with an additional volume control and a number of other tweaks. The mix control range is altered to allow 100 per cent wet signal to pass, and a discrete preamp has been added. Cranking up the volume produces a clean boost to drive your amp harder.

Sounds
An internal switch enables users to select true bypass or a buffered mode that keeps the onboard preamp and volume control active ± even when the Topanga is switched off. I placed the Topanga in a switchable loop, set the volume for unity gain and discovered that the preamp very subtly enhanced the dry tone’s clarity.

You can set the Topanga for a subtle halo of dark reverb or lashings of splash, but it always sounds like a spring reverb and nothing else. Dwell pushes the effect into a spitty wash that sounds its surfiest with the tone set high. This may be desirable for die-hard reverb fanatics only, but with single coils it delivers quintessential surf tone.

The dwell and volume controls interact. Although `dwell’ implies decay length, it also adds volume and grittiness. For sweeter and smoother reverb tones, you can set dwell lower, turn mix higher, then compensate for lower level by turning up vol.

Catalinbread suggests that the only pedals you should place in front of the Topanga are fuzzboxes. A Fuzzrite clone seemed an appropriate choice, and with the dwell and mix set to 3 o’clock the results were so startling I expected a mysterious horseman to appear over the horizon. Returning to clean tones, I learned that placing modulation pedals after the Topanga is a dreamy combination.

The Topanga’s range of reverb tones is so wide there are some I would probably never use and others I might find it hard to live without. But they all sound springy and completely unlike studio-style reverb effects. If you love spring reverb and your amp doesn’t already have one, consider the Topanga a problem solved.

Belle Epoch
Many of the well-documented `technical deficiencies’ of tape echoes are the things we have learned to love about them. These complex variables come together, often in a random and unpredictable way, to imbue every tape echo machine with a distinct character. Catalinbread wanted to replicate all these elements when developing the Belle Epoch as a hybrid analogue/digital version of the EP3 Echoplex.

Like the EP3, the Belle Epoch has a fully discrete preamp with no buffer stages or op-amps in the direct signal path. What’s more, both units can accept 9v to 18v ± higher voltages providing extra clean headroom for higher input levels post-boosts and overdrives.

The Echoplex delay range of 80ms to 800ms is adhered to. Echo sustain sets the number of repeats and echo delay replaces the EP3’s slider for setting delay times. EP3s certainly wobbled, and getting your machine serviced was the only way to control it. Nevertheless, wow and flutter remain huge parts of the Echoplex allure and the Belle Epoch’s sway/mod control allows fine adjustment.

Rec lev replicates the EP-3’s `record level’, which adjusts the amount of signal hitting the tape. At the end of the signal chain, the mix control swings from fully dry through to wet, using the authentic EP-3 mixing circuitry.

Inside the box, a trimpot sets gain and volume, and a switch selects true bypass or trails mode. In trails mode, the echoes fade away when the Belle Epoch is switched off, and the guitar signal is routed through the Belle Epoch’s preamp regardless of the on/off status of the pedal.

Sounds
The Belle Epoch sounded `right’ from the moment I switched it on and it’s entirely believable that Eric Johnson regards it as the closest alternative to a real Maestro Echoplex EP3 that money can currently buy.

The mod control is the Belle Epoch’s crowning glory. Other pedals attempt to emulate wow and flutter with simple oscillators, but the pulses are far too regular. In contrast, the Belle Epoch shifts the pitch in a seemingly random fashion, and it’s all the better for it. Mod has a huge range, but it’s easy to set and it allows the pedal to generate quirky little surprises ± almost as if there’s something unexplained going on inside.

Record level induces a chewy and slightly fizzy overdrive characteristic that is instantly recognisable from old recordings and gels equally well with clean and overdriven amps. It’s a powerful and effective feature that interacts with mix to create a huge range of tones and textures, but even at the lowest setting the Belle Epoch’s delays are never entirely ‘clean’. Although the dry signal can pass through untouched in true bypass, the preamp colouration of tails mode adds warmth and enhances the upper mids.

In keeping with the Echoplex’s single-head design, the Belle Epoch cannot produce complex multi-tap delays. Even so, it’s easy to set longer intervals and build up rhythmic patterns that float on waves of gentle modulation. With a spare pair of hands, you can even experiment with cheesy sci-fi effects and psychedelic mayhem with self-oscillation and sweeps through the echo delay range. It’s enormous fun.

Wherever you set the delay time, the repeats never seem obtrusive, and the Belle Epoch has that tape echo-like ability to sit in a mix without the necessity to match delay time to tempo – it’s unlikely that you’ll miss a tap tempo switch.

Like the Topanga, the Belle Epoch weighs next to nothing, takes up hardly any space on a pedaboard and is completely noise-free. In all other respects, the experience is exactly like playing through a really great tape echo. 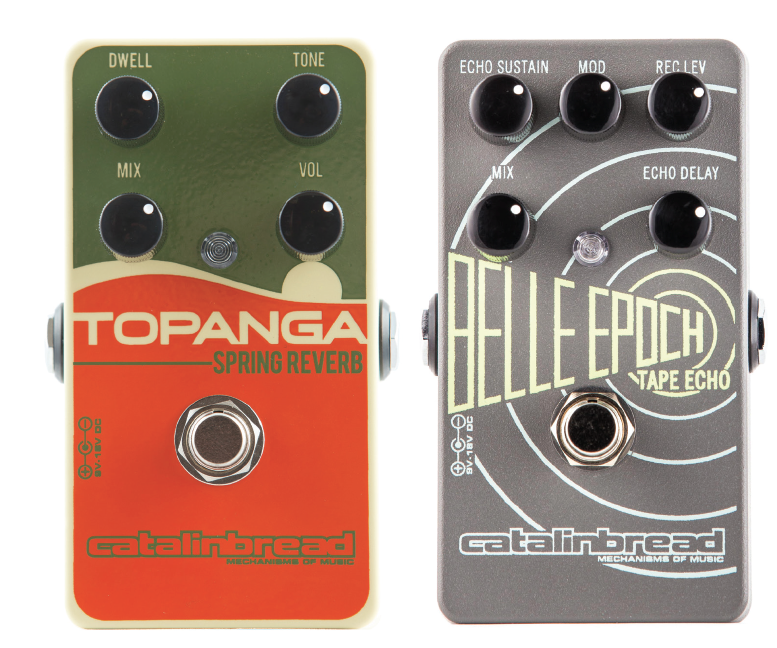 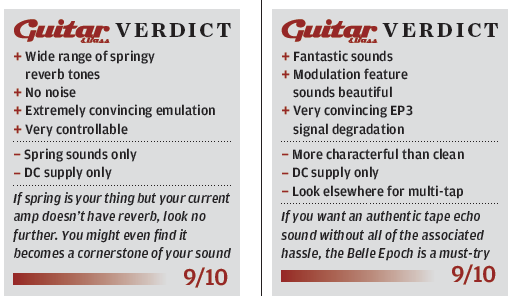