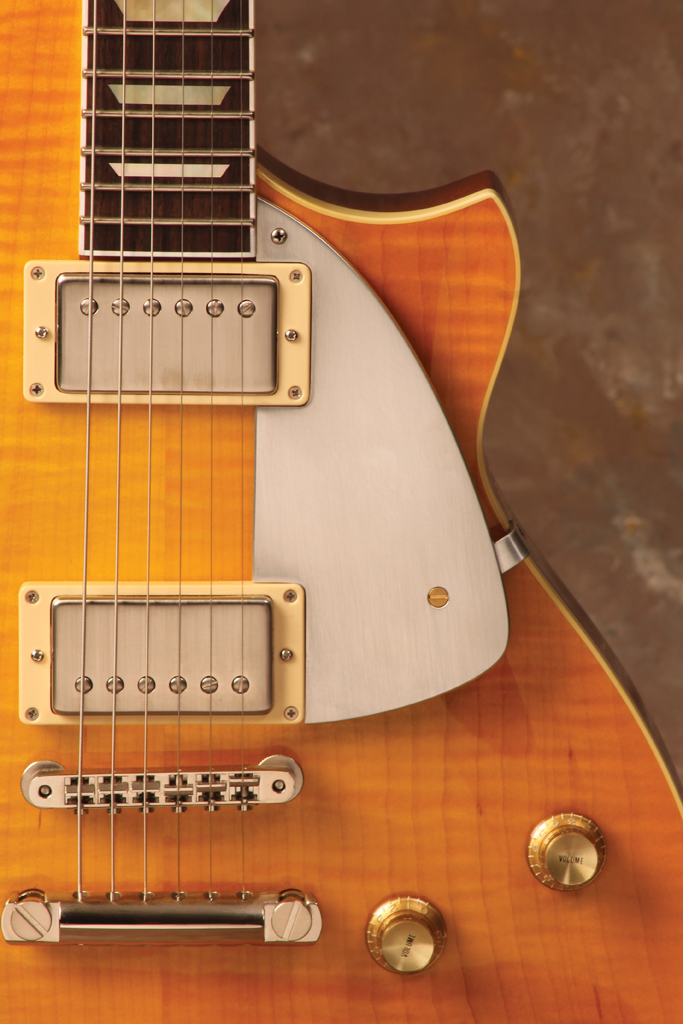 Cars and guitars have gone together beautifully since the early days of rock and roll. Whether a manufacturer has taken inspiration from a hot-rodded ’57 Chevrolet, a range of Detroit-influenced custom colours, the chrome fins of a Cadillac Fleetwood or Steve McQueen’s Bullitt Mustang Fastback GT, the transition from steel and rubber to wood and wire has been rendered so frequently that the two worlds have remained entwined sentimentally in the eyes of many players and makers alike. Few makers have embodied the sense of street-rod romance quite as artfully, however, as MotorAve Guitars.

Mark Fuqua, MotorAve’s sole proprietor and builder (well, his wife Kate covers much of the admin), got his start at Chandler Guitars in San Francisco, California, in 1990 after an early career as a guitarist. His vision was formed more fully, though, after he opened his own repair shop further south in Los Angeles, where the people of that city’s propensity for cruising the strip in modified hotrods informed an aesthetic that inspires him to this day.

The first MotorAve guitars were produced in a workshop on Venice Boulevard in West LA. The operation was moved to a premises on Sunset Boulevard in Hollywood for a time, before
a cross-country relocation to North Carolina in 2007, where Fuqua remains today. 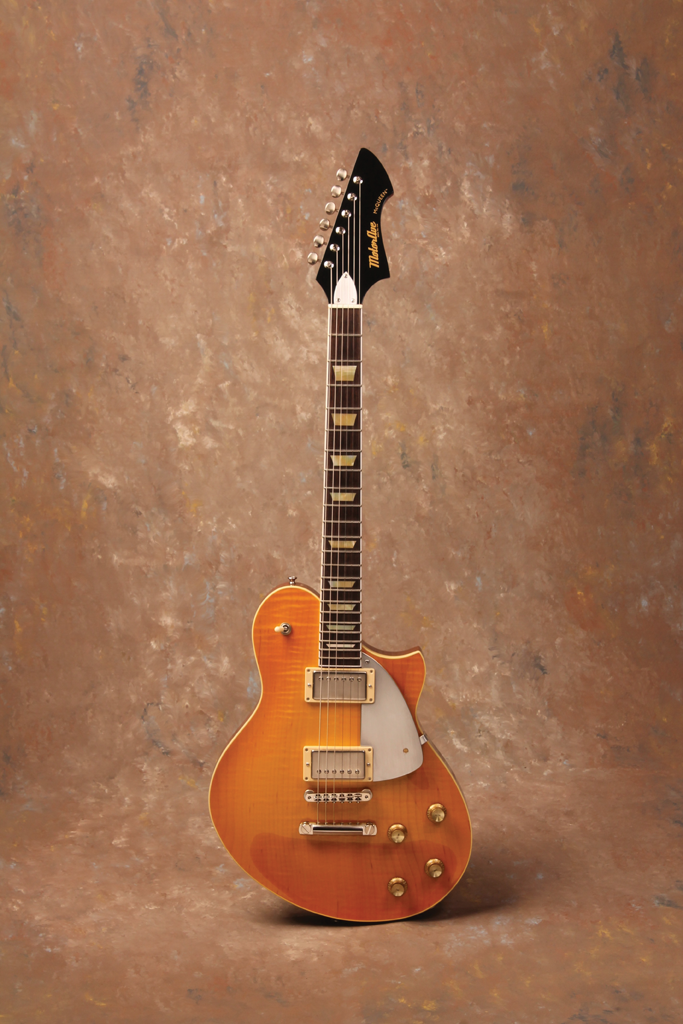 If you’re at all hip to contemporary rock of the past decade you’ll have seen a MotorAve BelAire in the hands of Queens Of The Stone Age star Josh Homme, an association that has led that big-bodied semi to be Mark’s most popular design.

Fuqua’s thinner solidbody LeMans – sort of an SG meets Gretsch Corvette, but with far more originality than that implies – is probably his second most frequently seen model. But it’s the sleek, sexy, none-more-rock McQueen that we’re exploring this issue. The McQueen’s inspirations are clear, yet it’s one of the most nuanced and stylish takes on the hallowed Les Paul I’ve ever seen. And that’s exactly the idea.

The first McQueen was designed and built when a Los Angeles musical pal of Fuqua’s needed a Les Paul to land a gig with a band that required him to play a rendition of the iconic singlecut, but he wanted something slightly… different. The results speak for themselves. As these photos reveal, the McQueen’s design incorporates something very close to the same mass as the classic Gibson, yet it gives the body lines a distinct MotorAve-style twist. 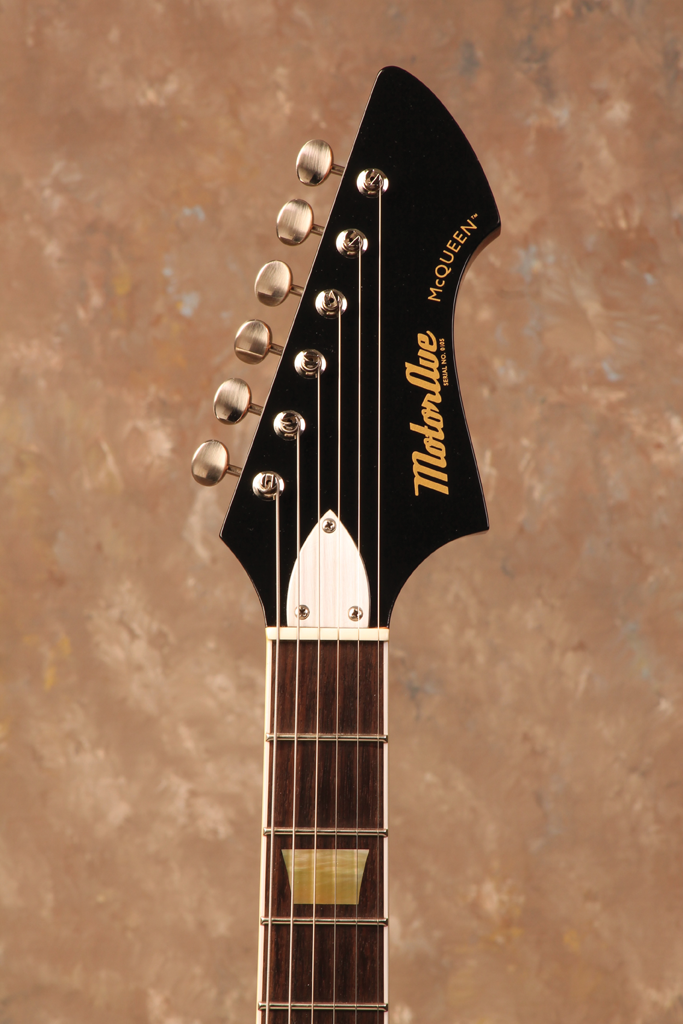 The result is a guitar that is somehow hauntingly familiar, yet it looks as if it’s racing to get there ahead of its stodgy, rounded predecessor. Rather like, in fact, a cartoon hotrod that appears to lean forward on as its elongated tyres squeal and spin in place before it finally peels out and screeches into its take-off.

I have most often seen the McQueen with more of a Les Paul Custom look – black top finish with green abalone block fingerboard inlays – perhaps because at least two of that type have been made, whereas the others to date are essentially one-offs. This one, however, with its gorgeous yet not ostentatious figured maple top and faded, golden-hued Iced-tea Burst finish (which is barely a burst at all, but absolutely gorgeous), comes off more like a ’59 Standard. Even so, the custom MotorAve details take it somewhere else entirely.

The dual humbuckers (respected Wolfetone Dr. Vintage units), TonePros tune-o-matic bridge and stopbar and four-knob/three-way toggle electronics complement stick to tradition. However, the sultry, asymmetrical offset look of the body and the brushed aluminium pickguard quickly signal that we’re not in Kalamazoo anymore.

That impression is quickly consolidated as you work your way up the neck. Mid-flight, it’s all still comfortably familiar – although what you can’t see counts too, including a mortise neck joint with extended tenon, carbon-fibre reinforcing rails to bolster the traditional truss rod and a scarf-jointed headstock for added strength.

Up top, we’re in entirely new territory for this breed of guitar. Rather than the classic three-a-side headstock, Fuqua has given the McQueen his sharp six-a-side design, the same used on the LeMans. On paper, it might sound an odd match-up, but in person it doesn’t jar in the least. It’s still a back-angled design, but the format allows a straight run from nut slots to tuner posts, which should aid the tuning stability.

On the other side of the coin, it also removes that string spread from nut to tuner that’s requisite of the original Les Paul design, which purportedly enhances resonance by increasing tension in the nut slots. But hey, this isn’t intended to be a dead-on LP, as we’ve already seen, and it’s another interesting point of departure.

Also up at this end is a brushed-aluminium truss-rod cover to match the ’guard, and a set of vintage-style Kluson tuners with modest nickel buttons, which I agree work better than would a set of pearloid or green-key keystone tuners. 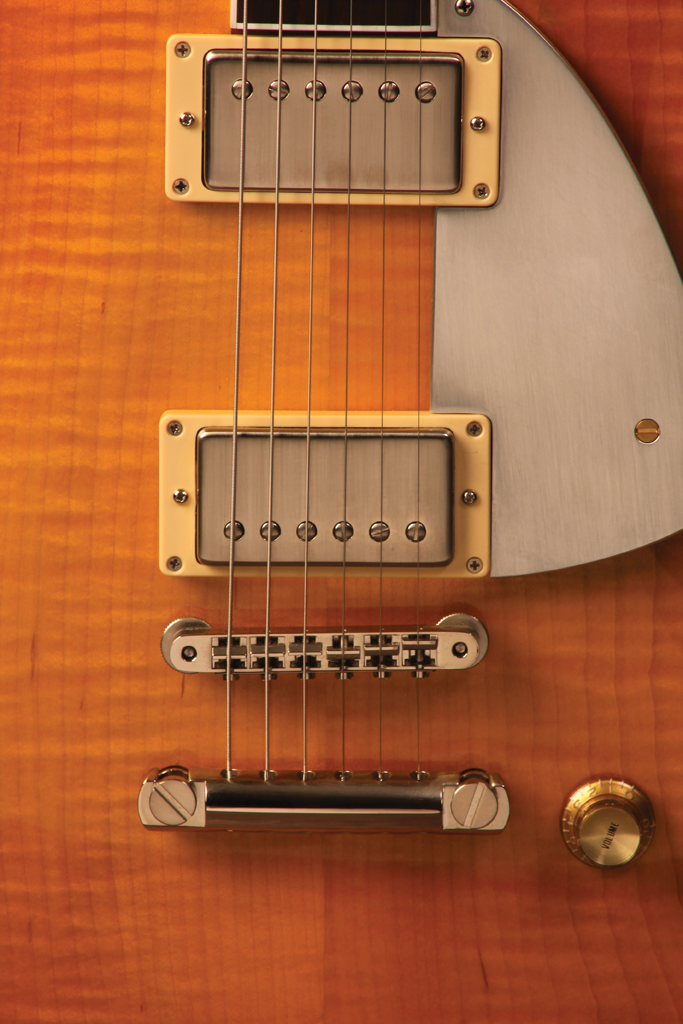 The creatively chambered mahogany body keeps the weight down to just under 8lbs without seeming to denude the mass and sustain one jot, and the McQueen’s shape hangs just as easily on the strap as it sits comfortably in the lap. Fuqua says the design results in a somewhat “smaller and tighter” tone, and I wouldn’t call that verdict inaccurate.

At first blush, though – tested through modified JTM45-style and custom AC15-style heads through a range of cabs – I’d say the guitar also ably nails just about anything you’d expect to need a traditional Les Paul for. The Wolfetones are capable PAF-style pickups, with good edge and bite, and a focused response that’s also enticingly rich and lively.

As such, they help the McQueen excel at more vintage-leaning humbucker voicings, with great raw rock ‘n’ roll snarl in the bridge position with either amp pushed into breakup, or surprisingly clear twang when you clean it all up. The neck pickup is as buoyant and round as you might hope, with plenty of vocal thickness, but admirably clear, too.

In brief, given the template, there are no major surprises – yet the McQueen does everything elegantly and well, and is smoothly and superbly playable in the process. Some players like to look down and see the same old carved-top, singlecut shape that their heroes played when they were doing these tricks.

Personally, it’s refreshing to be able to get there with an alternative look in your hands. I certainly don’t feel the McQueen’s fast curves and sexy slant lose anything in the rawk department; and besides, they just might inspire me to come up with something a bit… different.