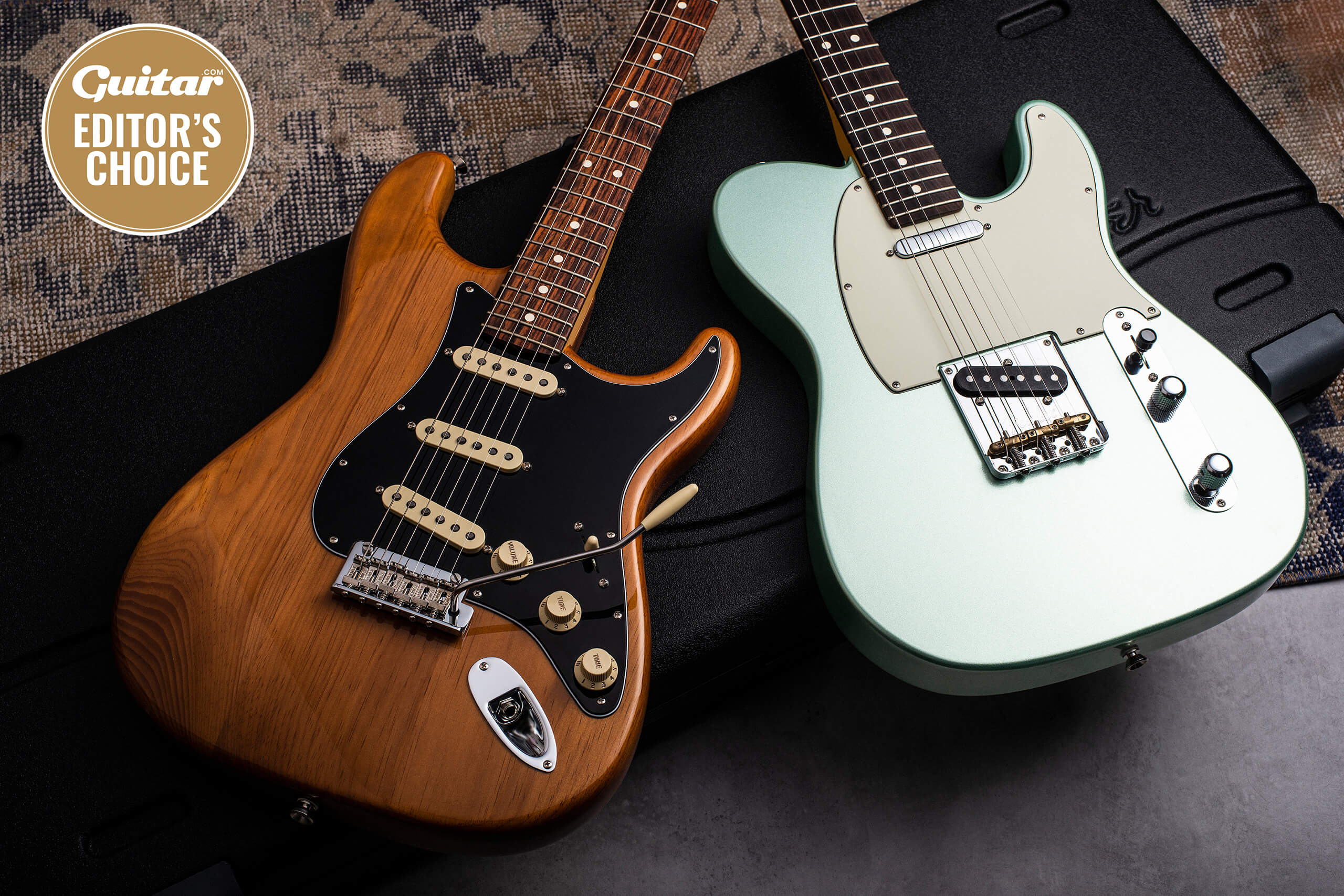 Although Fender’s American Professional series was introduced in January 2017, earlier this year the Californian giant decided it was already time for a refresh. How do you launch a new guitar line in a world without trade shows? You harness the power of social media. Next-gen American Professional models surfed their way into view in October on a wave of enthusiasm from artists and influencers, and it was almost impossible to scroll through Instagram without stumbling over someone extolling the virtues of Am Pro II and its rainbow of new hues.

Made in Fender’s Corona facility in Southern California, the original American Professional models were designed to supersede the American Standard line. The raison d’être for Am Pro version 2.0 is to occupy the mainstream sweet spot between the vintage reissues in the American Original series and the modernistic feature set of the American Ultras. Along with the more traditionally configured Strat and Tele you see here, the new range comprises a HSS Strat, Telecaster Deluxe, Jazzmaster, four and five-string Precision and Jazz basses and even a fretless Jazz.

One big change this time around is that, thanks to an invasive beetle species and the destructive impact of flooding in the Mississippi Delta, lightweight swamp ash is no longer available in the quantities Fender requires in order to use it throughout the catalogue. “Volume is absolutely a big factor,” explained Justin Norvell, EVP of Fender products, when the company announced its intention to reduce the use of ash in April.

“We will not be 100 per cent out of ash guitars. Rather, we are just severely curtailing the usage to the higher end and areas where it’s a must – for example, an American Original ’50s Telecaster or a Jimmy Page Telecaster. We will continue to buy all the ash we can, but expect supply to be more sporadic. We may still build some limited runs as and when we can procure the supply.”

Here in the second-generation American Professional line, ash has been replaced by roasted pine. Norvell says roasted pine “eliminates any softness preconceptions, and tonally models more of a vintage/seasoned body.” While thermally treated pine is used to formidable effect in the boutique world by Novo and others, Fender buffs will know that the company’s history with pine – albeit without heat treatment – goes way back to Leo’s early solidbody prototypes in the late 1940s.

Seen here on the APII Stratocaster, the combination of caramel-toned roasted pine and gloss urethane perhaps doesn’t embrace the downhome aesthetic of the timber choice as much as a thin satin or open-pore finish might. Throw on that black scratchplate and there’s an inescapable mid-1970s vibe, but happily the weight, resonance and playability are not reminiscent of many Strats we’ve played from that era. More on that shortly.

The Telecaster’s Mystic Surf Green metallic finish has been applied to a more conventional alder body and, paired with its three-ply mint green pickguard, there’s a timeless look that nods towards the 1960s but still feels fresh and contemporary. Although mounting the neck pickup on the pickguard doesn’t look quite as clean as screwing it into the body, it’s certainly easier to alter the pickup’s height without removing the scratchplate, so it’s a welcome solution for those of us who are constantly tweaking. Likewise the Micro-Tilt neck angle adjustment and headstock-end truss rod access; the latter being especially useful for touring musicians whose instruments are subject to extreme variations in temperature and humidity.

The overarching theme seems to be maximising flexibility and minimising potential discomfort. This is typified by the upgraded Telecaster bridge with its cut-down sides, compensated brass ‘bullet’ saddles with rounded ends on the outer pair, and low-profile grub screws for height adjustment. You can also string through the body, top load or use a combination of both. If you’ve never experimented with a top-loading Tele bridge we recommend it. The difference is subtle but, thanks to the change in break angle over the saddles, the feel is a little more elastic – much like top-wrapping on a Les Paul Standard.

“You can string through the body, top load or use a combination of both. If you’ve never experimented with a top-loading Tele bridge we recommend it”

The Strat’s bridge gets an update too, with a new cold-rolled steel vibrato block replacing the previous cast unit. Cold-rolled steel is very much a part of the pre-CBS Stratocaster recipe and a common upgrade on newer instruments for reasons of improved sustain and clarity, so it’s a welcome addition here. While the Strat’s plastics are unchanged, the Telecaster gets domed knobs and the ergonomic theme even extends to the curved string trees. These are also found on American Ultra and are present on our review models alongside staggered-height tuners that survive from the previous American Professional models.

Mixed-magnet V-Mod pickups appear here in their second incarnation, and both guitars employ push-push tone pots to unlock trick wiring and additional sounds. On the Telecaster you get the middle position in series – dispensing with the need for the popular four-way switch mod – while on the Strat, the neck pickup is added to positions one and two. This gives you a Tele-style combination of bridge and neck in position one, and all three pickups in parallel in position two. In addition, on the underside of each instrument’s master volume pot, you’ll find a treble bleed circuit made up of surface mount components on a tiny PCB.

Both guitars feature a new, drag-free ‘Super-Natural’ satin urethane neck finish, and a more pronounced roll on the edges of the fingerboards. While the tapered ‘Deep C’ profile is still somewhat misleadingly named, it’s certainly very comfortable, providing support where you need it and getting out of the way where you don’t. Straight out of the case, both instruments have an inviting feel and the sculpted heel design means that each and every narrow-tall fret on those extended rosewood fingerboards is easily accessible.

Unless you have a very restrained touch, the supplied .009-.042 gauge strings are a little light for drop tunings. However, in standard, our first impressions of both guitars are very positive indeed. Everything has been exceptionally well dialled-in and each instrument covers an awful lot of musical ground. Treble bleed circuits mean you retain high-end when rolling back the volume, so the tone controls become even more crucial. Although both guitars have a naturally airy, high-fidelity sheen, it’s possible to unlock swampier, thicker textures without needing to touch any of your amplifier’s dials.

“The Strat just about wins the battle of the necks. There’s a heavier edge roll and a gorgeous flame on the bass side, so it looks and feels slightly more luxurious”

The Strat just about wins the battle of the necks. There’s a heavier edge roll and a gorgeous flame on the bass side, so it looks and feels slightly more luxurious. Set up to float at the factory, the two-point vibrato is wonderfully smooth and players who find the classic Strat trem somewhat angular in performance will enjoy the subtlety on offer here. Compared to a typical ash-bodied Strat, this roasted pine American Professional II proves a little throatier and more complex, with a slightly softer attack. As well as being an excellent all-rounder, it has enormous character and rings like the proverbial bell. The additional sounds widen its scope even further and, in conjunction with the whammy bar and spring reverb, the neck and bridge pickup combination is especially enthralling.

Switching over to the Tele, we notice a slight weight increase, but otherwise there’s very little to complain about. Although it’s a potent secret weapon for expressive late-night blues, it’s not just the glorious series mode that sells this guitar. The sheer usable range and interactivity of the controls, in conjunction with superbly voiced pickups, equips this instrument to be as useful at a heavy rock festival as would be in a Nashville honky tonk. Over the past seven decades, the Telecaster’s remarkable versatility has been proven by everyone from Bill Frisell to Idles, but this is still one of the most multifaceted examples we’ve encountered.

Will we see first-generation American Professional owners queueing up to trade in their instruments with the quasi-religious fervour of tech nerds waiting in line for the latest smartphone launch? Probably not. But a series of intelligent upgrades have made these guitars even more versatile, enhanced the playing experience and broadened their already vast appeal. And distinctive new finish options such as Dark Night and Miami Blue seem to have captured the imagination of the guitar-buying public.

Some of these ideas are hardly new, but their appearance on Fender’s USA production models piles a little more pressure on the more derivative boutique guitar-makers. After all, if you can get a refined, no-compromise Strat or Tele from Fender’s standard US line for well under two grand, why look elsewhere? If the condition of Fender’s USA-made production-line guitars provides a useful temperature test for the fortunes of the brand as a whole, then the new American Professional II series provides compelling evidence that the people at the company who really know guitars are making their voices heard loud and clear.