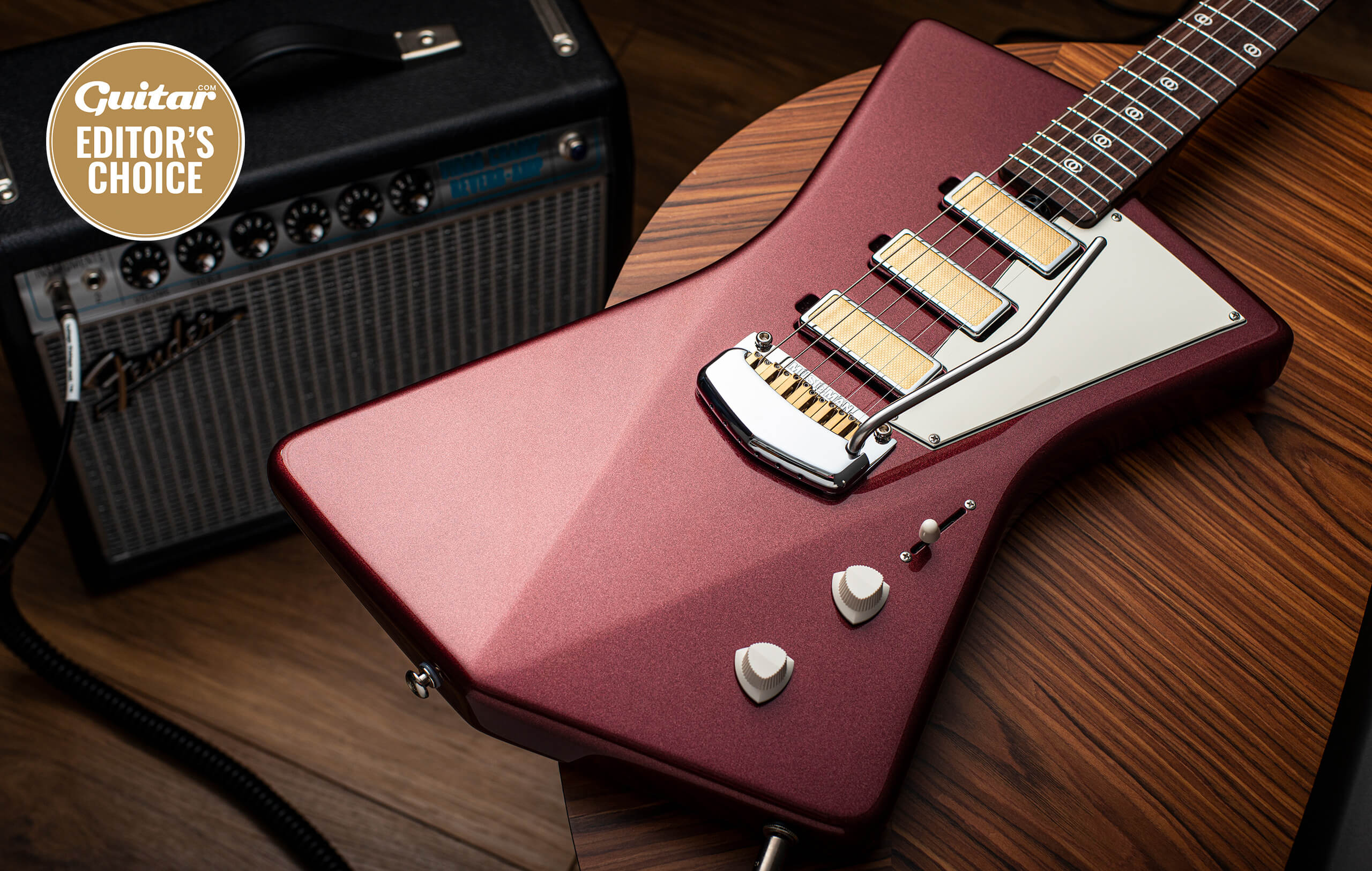 A uniquely beautiful signature guitar that also happens to play and sound great.

There’s only one word for this guitar: spectacular. And if you want a few more, try ‘even prettier than the standard Music Man St. Vincent’. This is the Goldie, and it’s fair to say our first impressions are more than slightly favourable.

The latest signature model for the artist also known as Annie Clark, this three-pickup solidbody tweaks the radical design of the 2016 original in a number of ways, most notably trading its three DiMarzio mini-humbuckers for a new custom-made type with gold foil tops.

That should have a significant effect on the sonics, but there are purely aesthetic changes too. Most obvious is the pickguard, which no longer hogs the whole front half of the guitar – a step back towards traditional styling, maybe, but a smart one. The asymmetrical headstock, meanwhile, has been flipped so you now get only two tuners on the top. Its curves still don’t match the hard geometric lines of the body, but it does somehow work better upside-down. 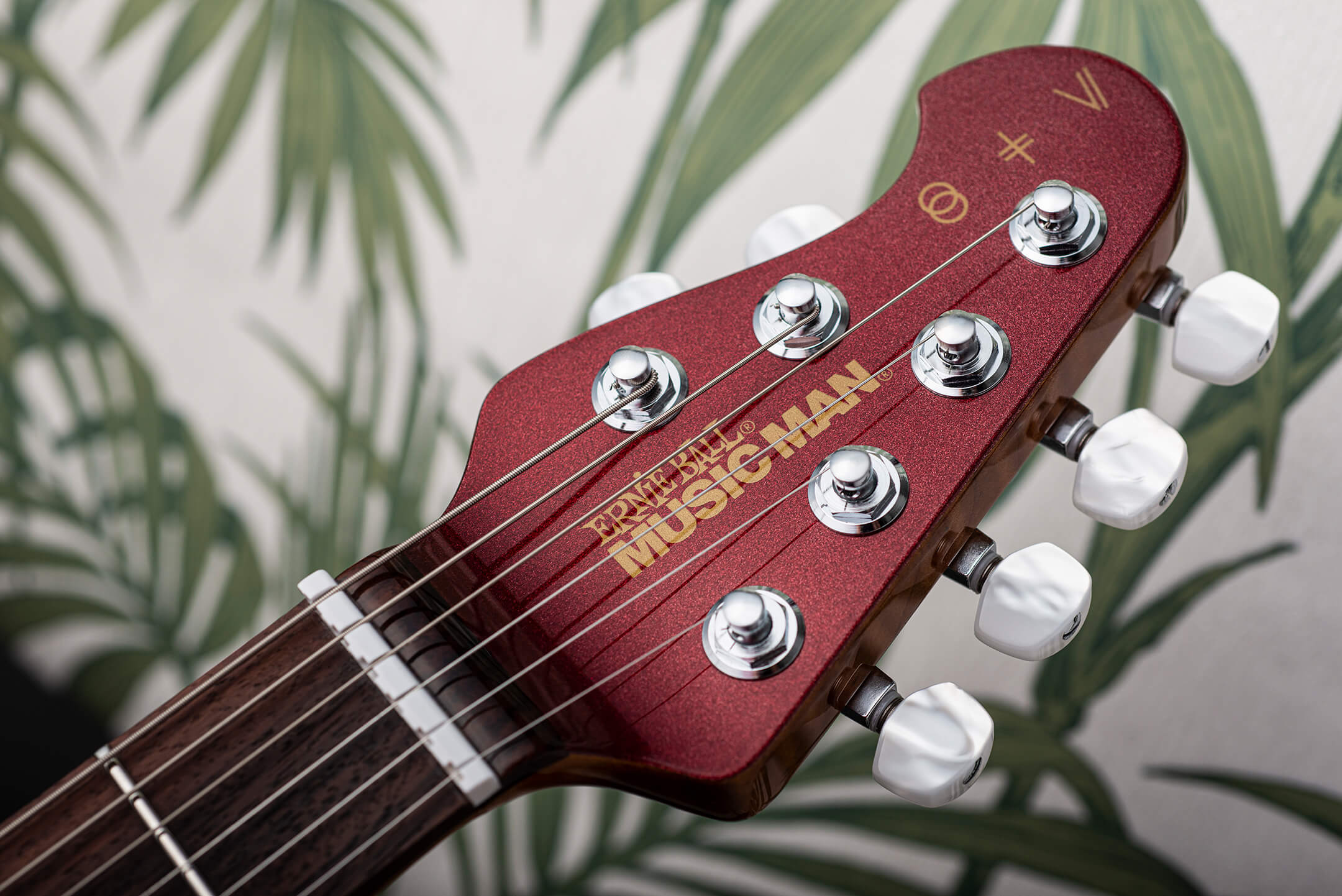 That body outline remains a stunning exercise in retro-futurism, apparently inspired more by Russian suprematist art than by anything so humdrum as the electric guitar archetypes of the 50s and 60s. Okay, there’s maybe a hint of Explorer in there, as well as a nod to the angularity of Music Man’s own Albert Lee signature range, but this is shaping up to be a classic design in its own right.

In fact, possibly the best thing about the St. Vincent body style is something you can’t always see from the front: the arrowhead-like three-plane carve of its top surface, which accentuates the dynamism of the shape while handily creating a natural forearm chamfer. Combined with a more conventional belly-carve on the back, it makes this instrument as easy to hold and play as it is to stare longingly at. 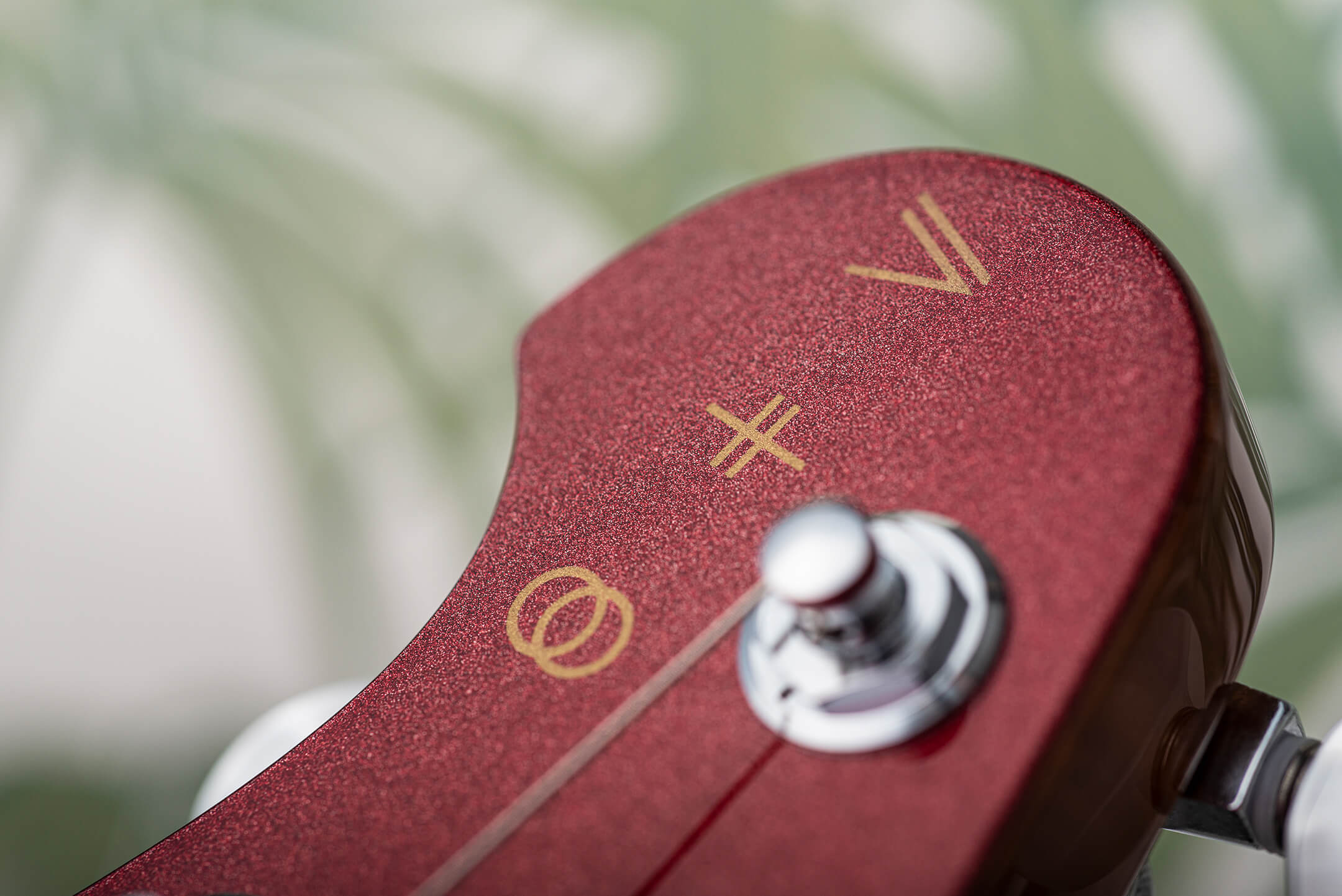 Right, let’s get down to the serious stuff – starting with the pickups. Inspired by the gold foils in Annie’s old Harmony Bobkat, these new mini-humbuckers promise less grunt but more top-end clarity than the standard model’s DiMarzios. The fact that they look cuter than little rectangular kittens is just a bonus.

A five-way blade controls the pickups, but gone is the esoteric switching layout Clark chose for the original, this time opting for a conventional Strat-style set-up, with master volume and tone. The knobs for each are a stylish cross between a tricorne hat and a cupcake, though the absence of markers might worry keen twiddlers. 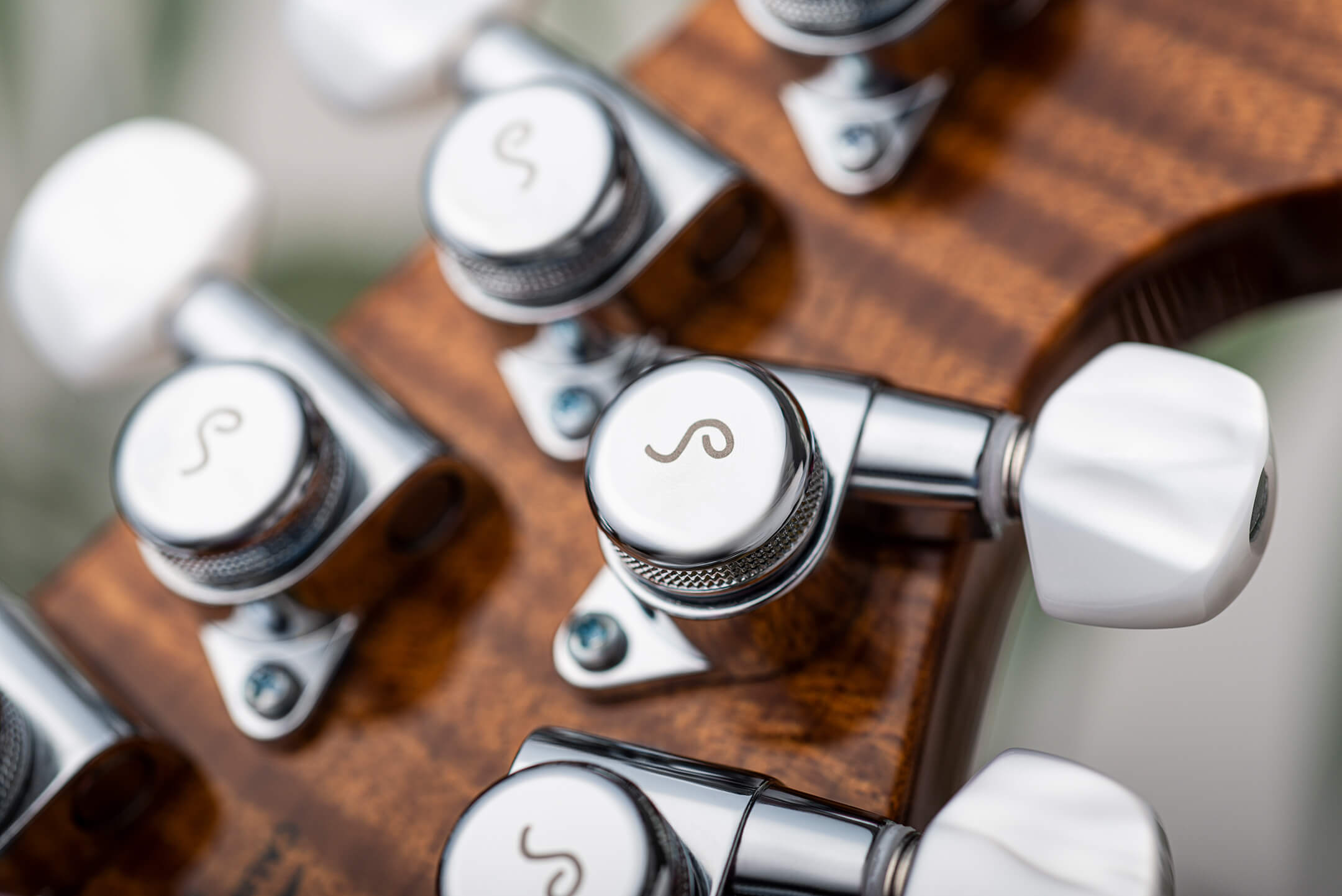 As on the original guitar, the bridge is Music Man’s own take on a two-pivot Strat type, only this time with solid brass saddles instead of bent steel. The arm clips into place with a reassuring clunk and it all feels beautifully solid.

At the other end of the roasted maple neck, we find Schaller locking tuners and, that rarest of treats, a compensated nut – yes, you can play an E minor and an E major on this guitar without having to decide which one’s actually going to be in tune. Luxury! 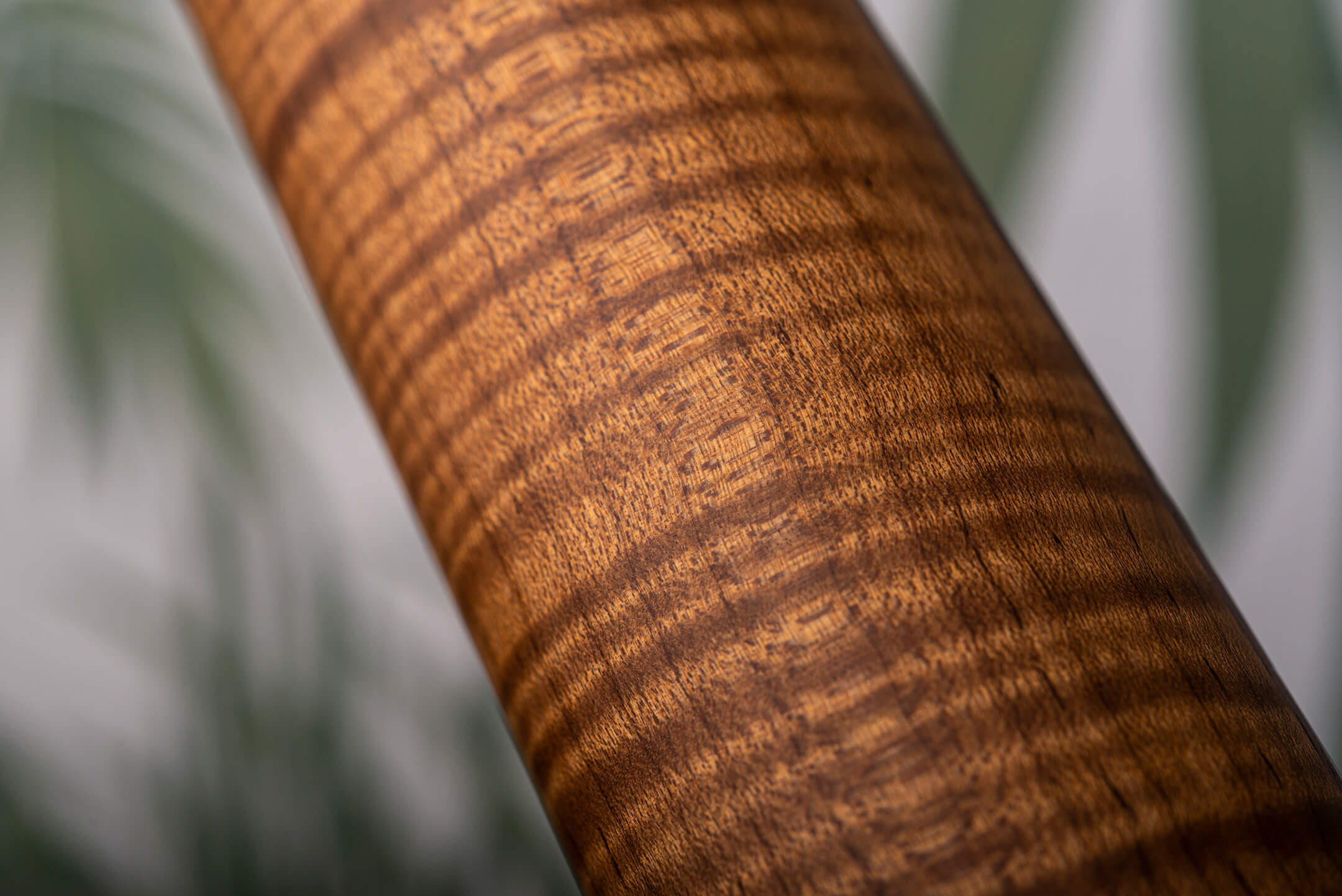 What don’t we like so much? Well, the sudden transition from satin-finished neck to full-gloss headstock at a line beneath the nut looks rather jarring, and that 2+4 tuner arrangement takes a lot of getting used to. Also, despite a nicely contoured five-bolt heel, the lack of a true cutaway means access to the upper frets can be a stretch.

When it comes to finishes, aside from the deep red ‘Velveteen’ of our review guitar, your elaborately named options are Cashmere or Silk Charmeuse… which just means gold or black. Note that, while red guitars such as ours get rosewood fretboards, the other two colours come with ebony ’boards. 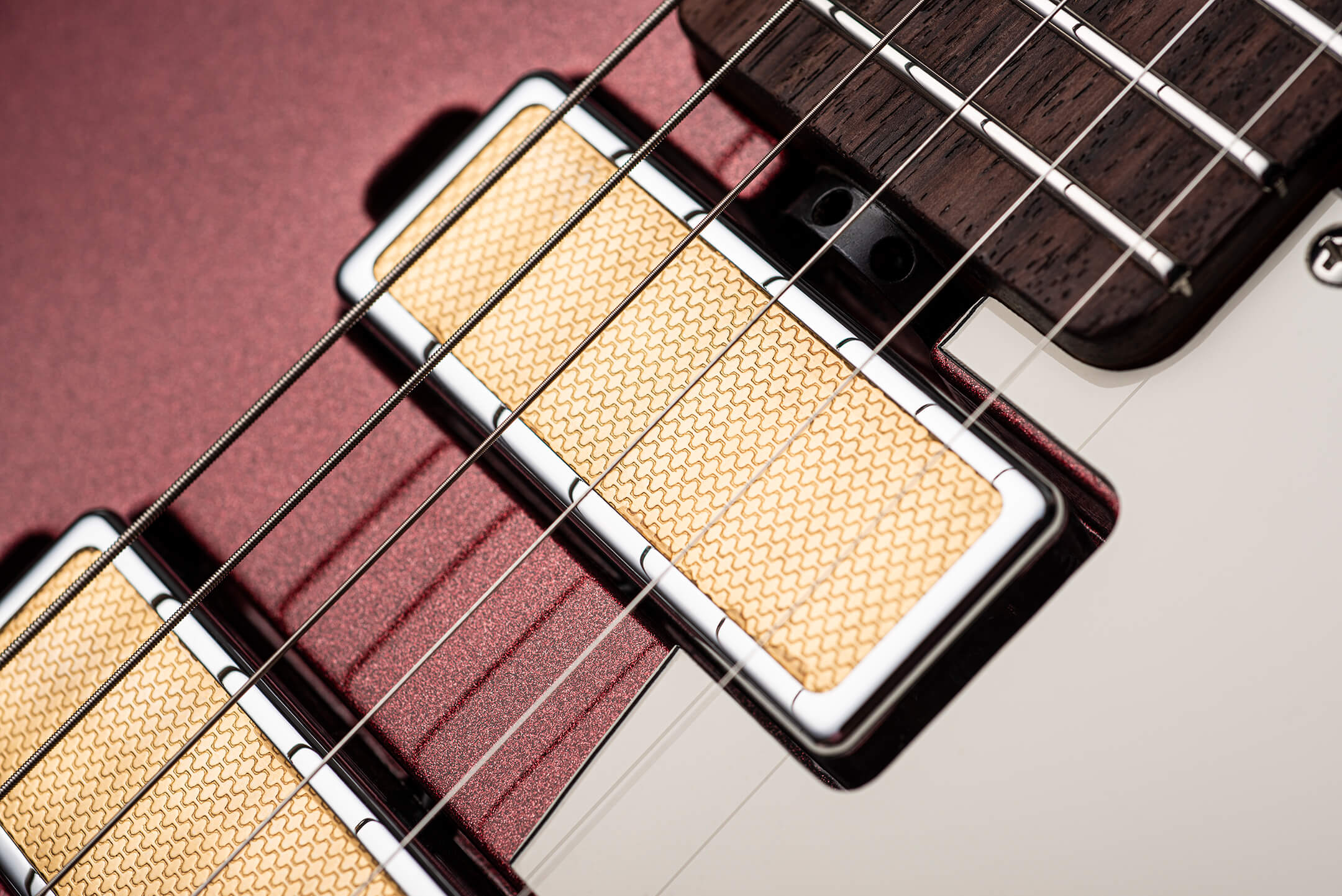 You don’t have to be a fan of St. Vincent’s music to appreciate this guitar. As you might expect at this dizzying price, everything about it reeks of quality – and that includes the tones.

But while we’ve already touched on the ergonomic advantages of that body shape, let’s talk more about playability first. The combination of a lightweight okoume body and a moderately thin neck profile suggests a guitar that’s been specced with smaller players in mind, but it certainly doesn’t feel toy-like to those of us with giant tarantula hands. And while the fretboard edges are not the smoothest we’ve ever grabbed, it’s very easy to lose half an hour noodling on this thing before you even remember to plug it in. 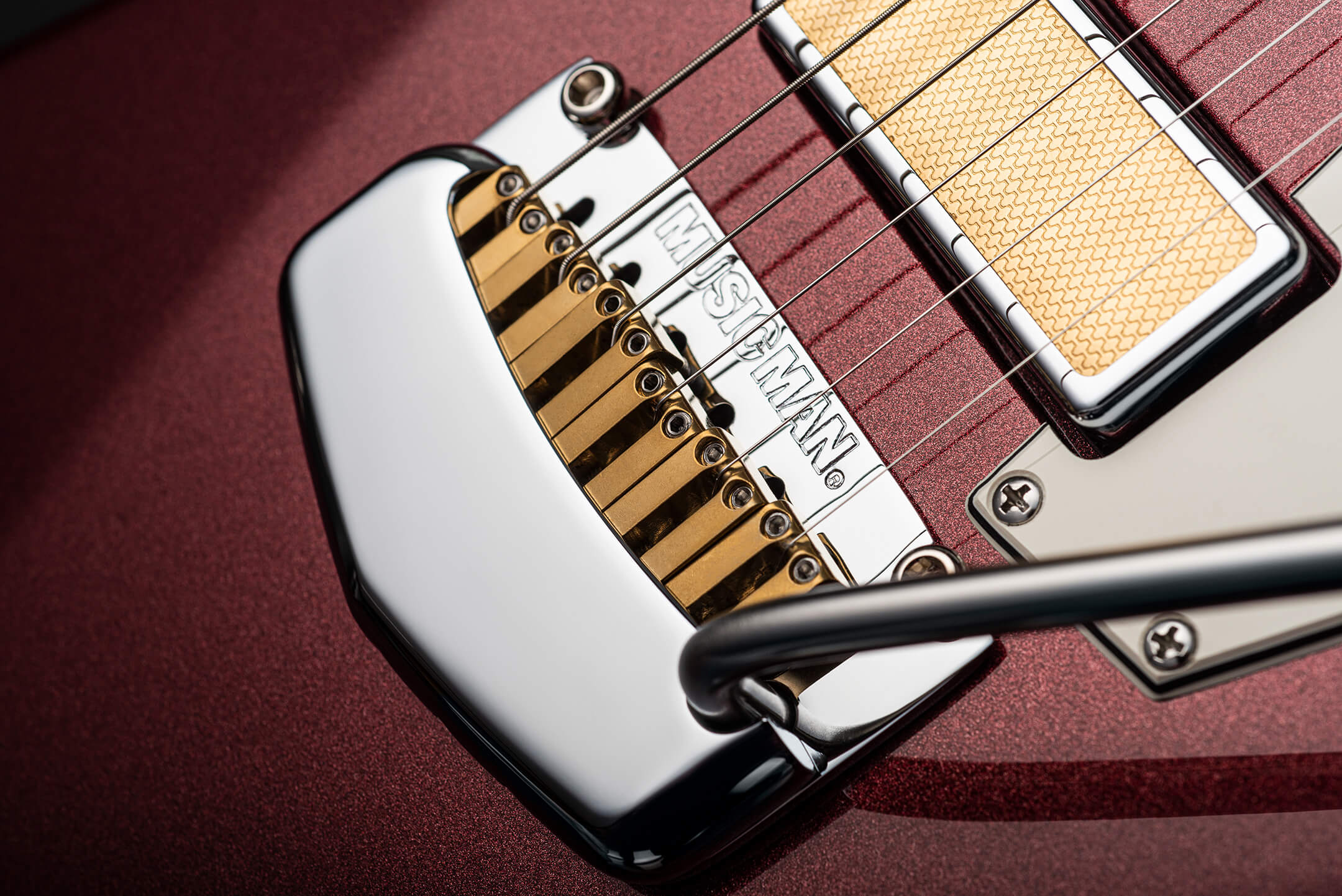 You’ll be glad when you do plug it in, though. Gold foil pickups tend to be fairly low-output, so in this ‘mini’ format they can offer a nifty compromise between chunky humbuckers and sparkly single-coils… which is exactly what you’re getting here: an array of bright and fresh sounds with pleasing solidity in the low-end and vintage twang galore in the mids.

The bridge pup has clearly been wound hotter than the other two to compensate for its position, giving a DC resistance reading of 10.6 ohms compared to the 7.7 of the other two. That stops its clean tones getting too skinny, but there’s no shortage of chime here – and if anything, it’s even better with overdrive, barking away with controlled aggression and staying impeccably tight in the bass. 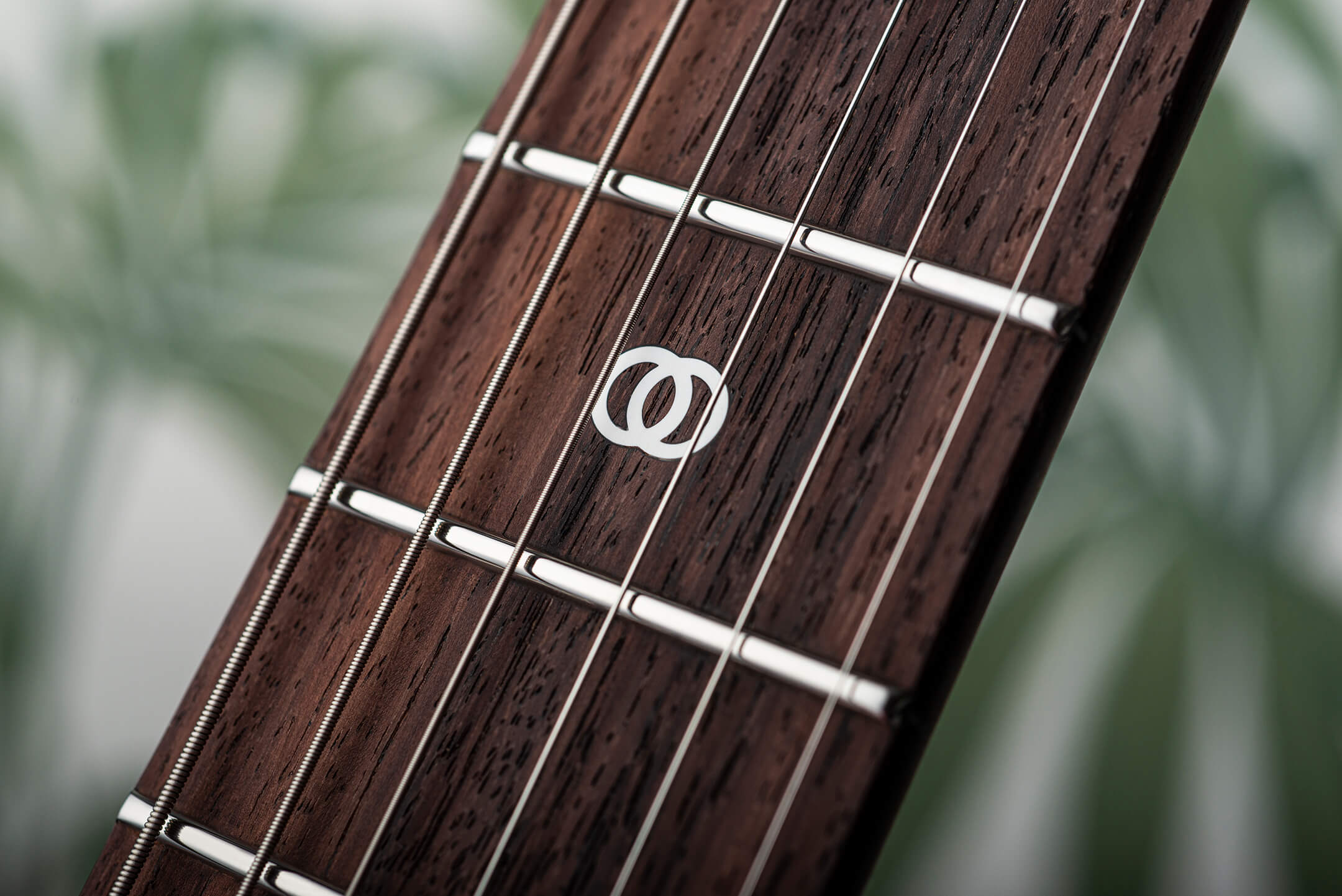 Flipping to the middle pickup softens the attack and introduces a bit of cluck, making it a natural choice for clean melodic riffing, while the neck unit is smoother but still retains a surprisingly crisp edge – step this way for breezy chords as well as, with a bit of help from the tone control, sweetly defined lead runs. 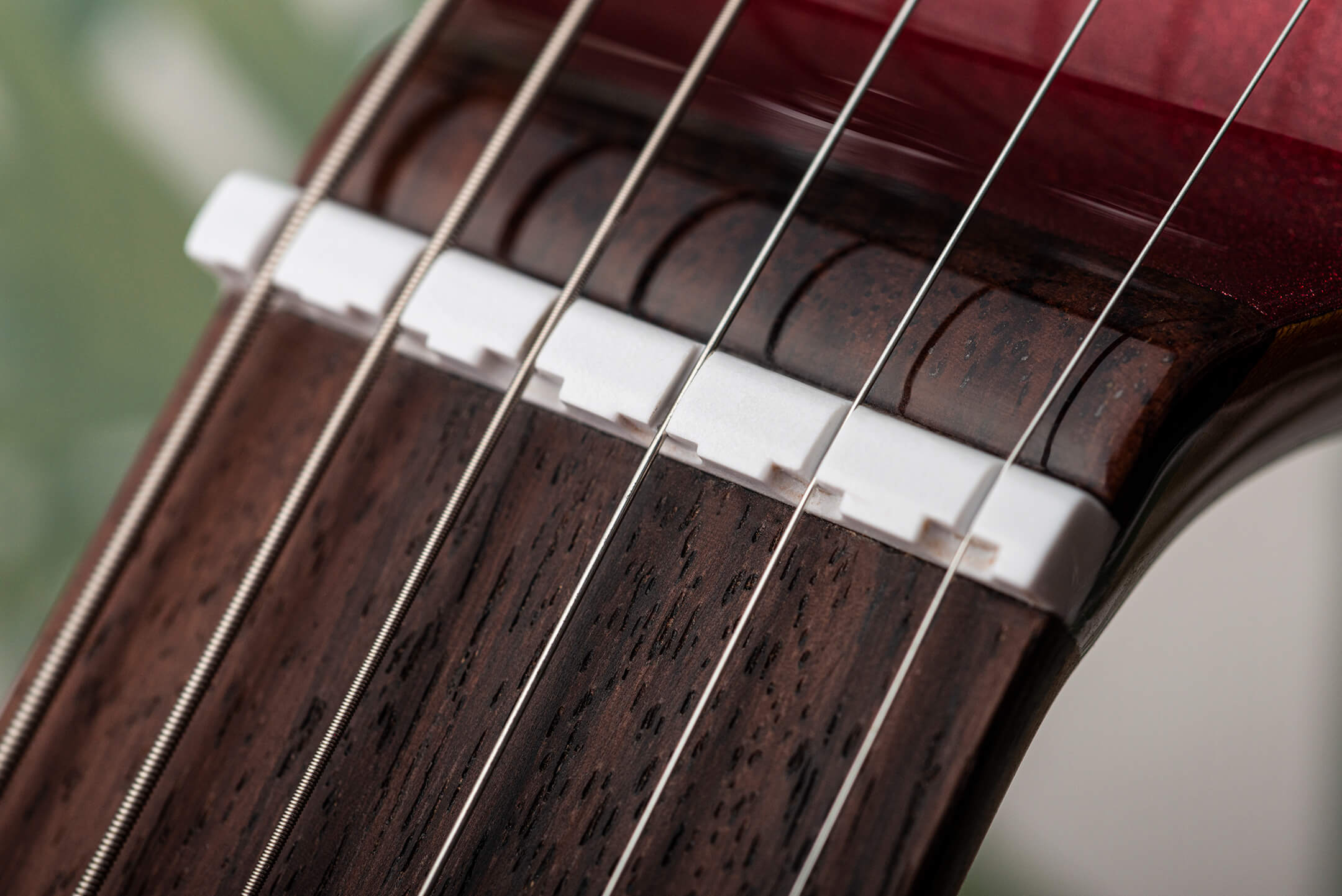 Worried about positions two and four due to a ‘Strat quack’ phobia? Well, there is some of that out-of-phase stuff going on, but it’s not excessive. Both of these settings go well with a dollop of drive, completing a full suite of five voices that all score equally highly for characterful clarity and tonal balance. Add a divebomb-friendly vibrato that returns to pitch with impressive reliability, and the St. Vincent Goldie starts to look like another hit. 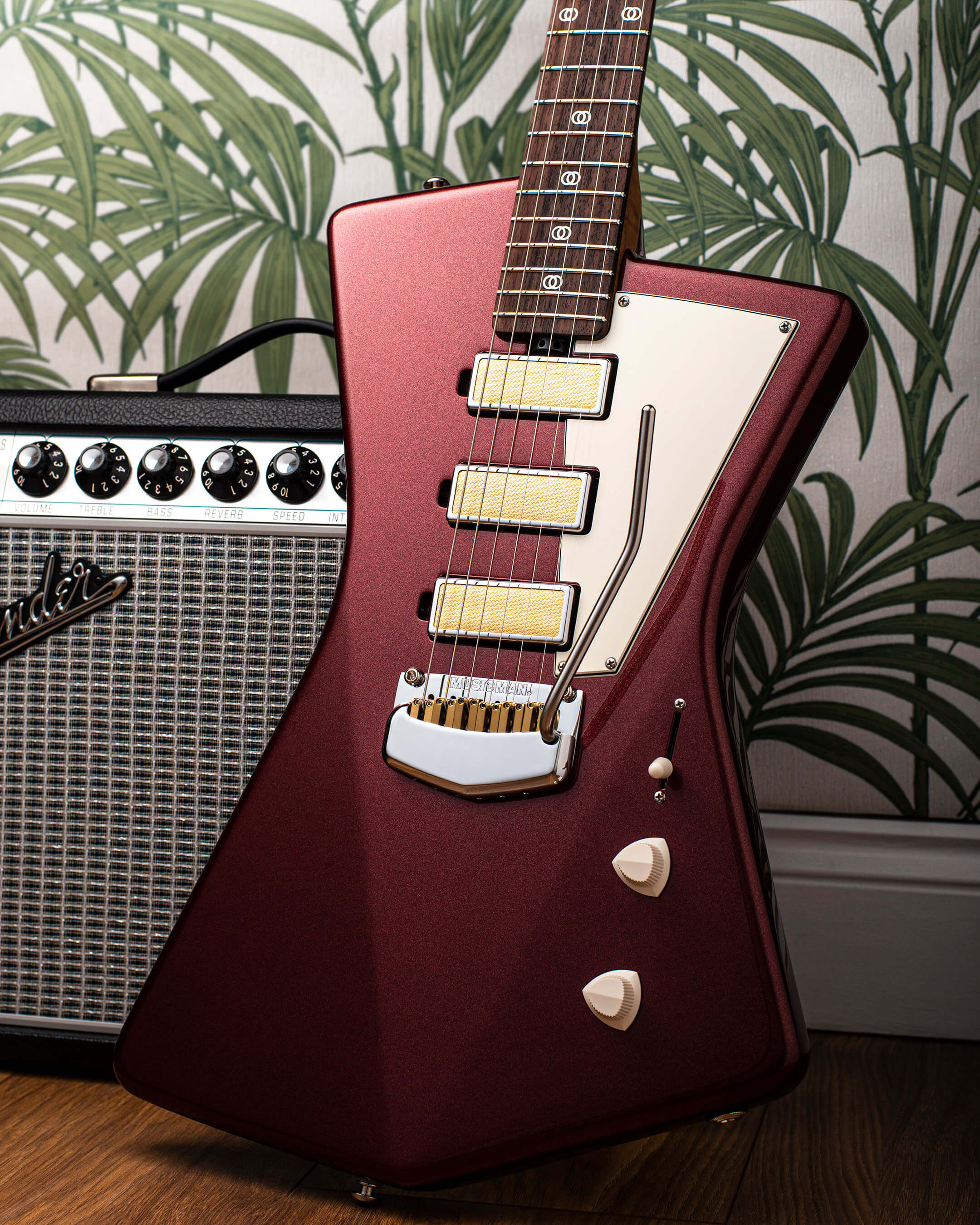