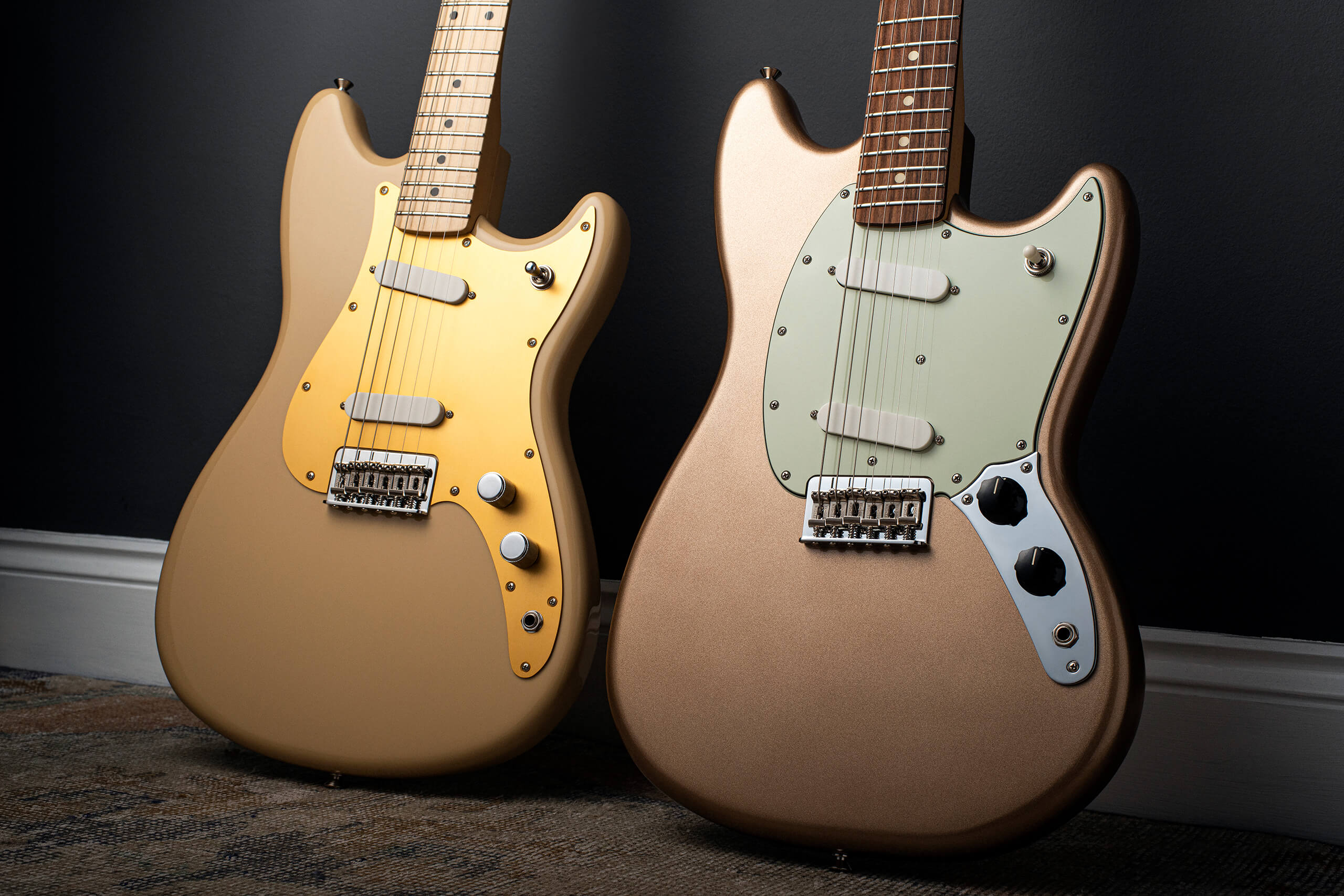 Two more Fender gems get the Player Series treatment – and you don’t have to be a beginner to get a kick out of these short-scale ‘student’ models.

The Mustang and Duo-Sonic might look quite similar, but there’s a philosophical divide between them that’s so deep it’s a miracle they agreed to be photographed together. Look closer at the shape of the Mustang’s gold body – its waist is a few inches further back on the treble side than on the bass side. Yep, it’s an offset-waist design… and the Duo-Sonic isn’t. This means war!

Alright, it doesn’t really. But what this pair of affordable cuties demonstrates is just how much Fender has been blurring the line between mainstream Strat types and underdog offsets lately. In fact, these two recent additions to the Player Series have evolved from 2016 models that were, confusingly, both listed in the Offset Series. Well, beyond their differing body shapes, they are natural siblings: both short-scale ‘student’ guitars, both with twin single-coil pickups, both dripping with indie cred. 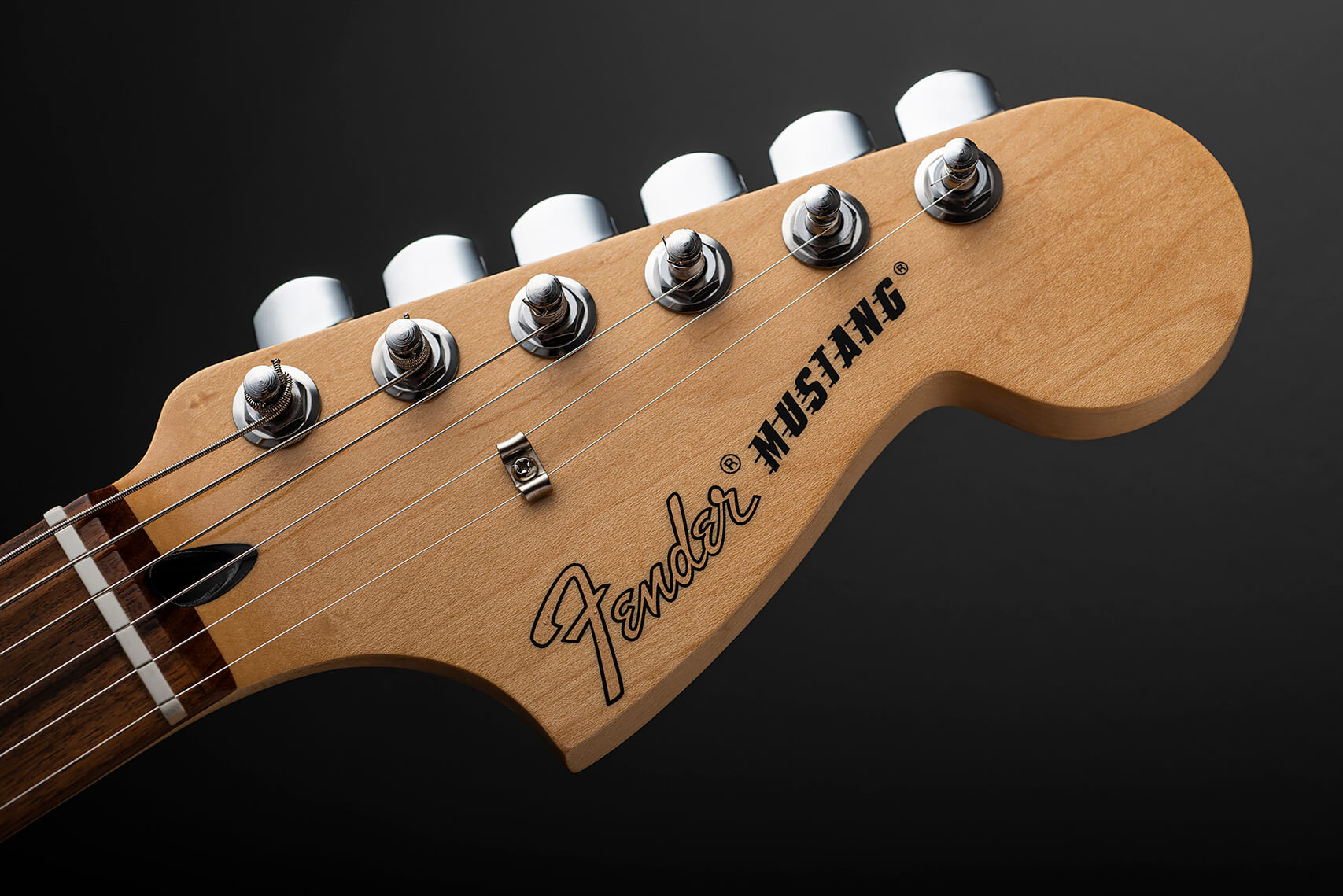 In terms of core specs, the similarities actually go much further. Both instruments have the same basic construction – slightly slimmed-down alder body, medium C-shaped maple neck with maple or pau ferro fingerboard (depending on colour), 24-inch scale – and each has the same fixed bridge with bent steel saddles and through-body stringing. In the case of the Mustang this might be considered heresy, but the Duo-Sonic never had a whammy.

Other than that short scale – which is actually up on the 22.5 inches you’d have been whizzing up and down if you bought an original Duo-Sonic in 1956 – these guitars feel very close in character to the Fender Player Lead II we reviewed recently. Only you’re getting your retro chic from the pre-CBS era here, and for 50 quid less. 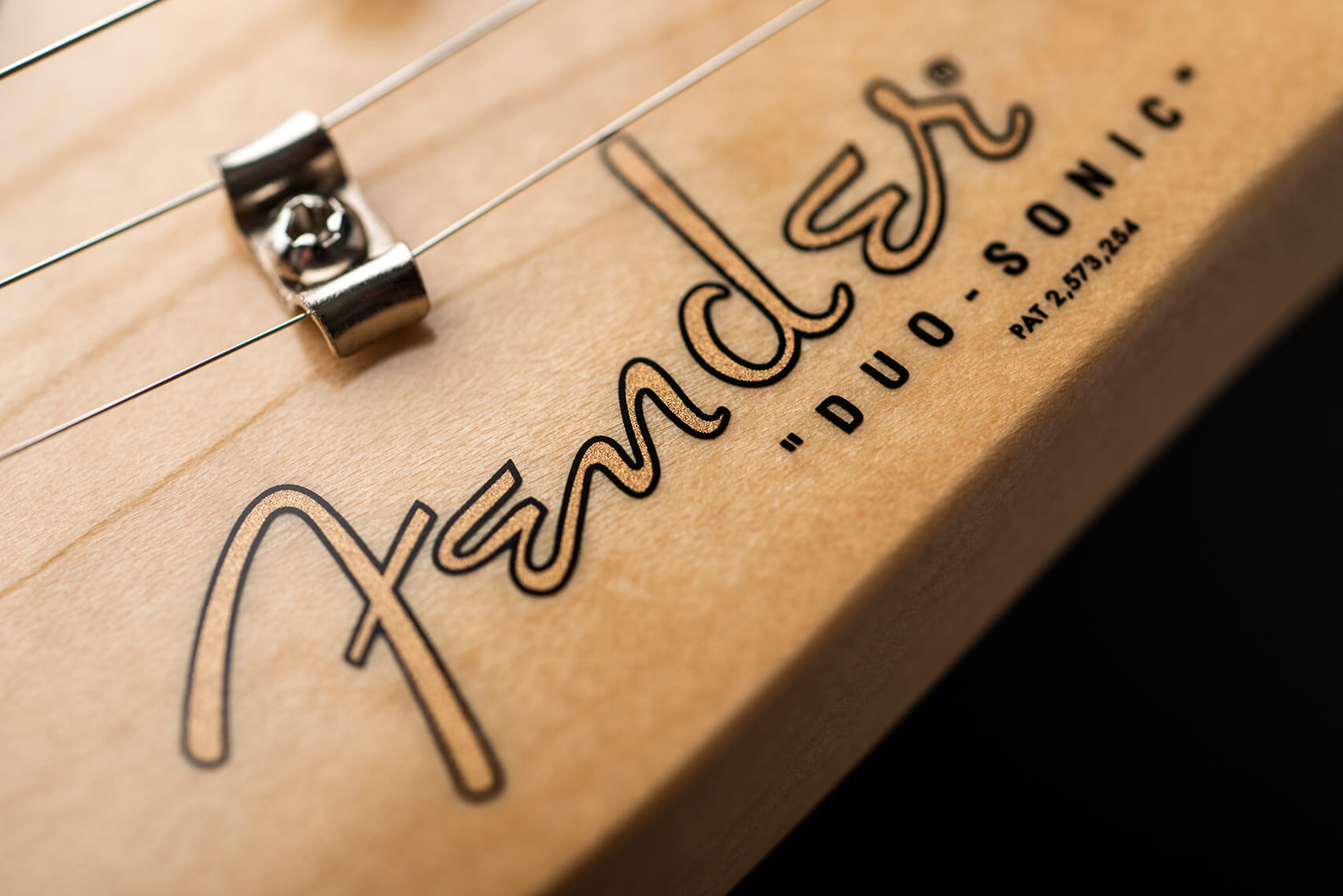 There are no psychedelic green or purple finishes on offer here, though. This luscious Firemist Gold is about as bold as it gets for the Mustang, while the Duo-Sonic’s green and blue options keep things cool and tasteful for those who find the sweetness of the Desert Sand finish – complete with gold aluminium pickguard – a little cloying. It is basically a banoffee pie in guitar form, but that’s what the early ones all looked like.

“the Player Mustang has a you-know-you-want-me twinkle in its eye; the Duo-Sonic will appeal to those who like Strat-style tones”

So, any other differences to be aware of before we get stuck in?

Well, the Mustang has a bigger headstock, just as it did when it arrived in 1964, but there’s something potentially more significant going on with the pickups. Give yourself a sticker if you spotted that the Duo-Sonic’s bridge pickup isn’t angled like the one on the Mustang, but there’s more to it than that. While the units themselves look identical – and all four give DC resistance readings in the low sixes – they’re not actually the same across both models. Just how different they are, we’ll find out soon enough. 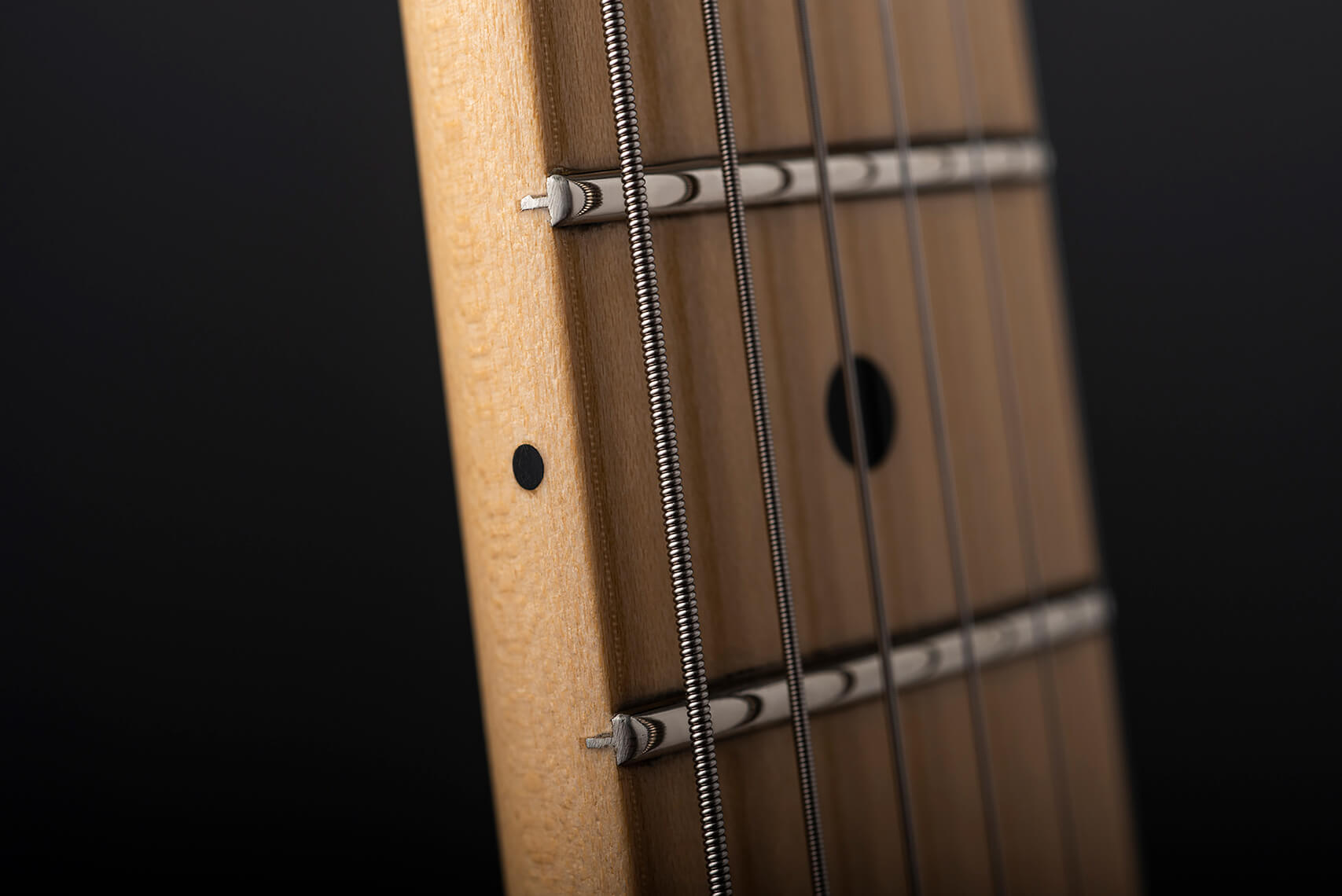 Given the similar build of these guitars, any major differences in acoustic tone can probably be put down to the standard variance you’ll get between two slabs of the same wood. For the record, though, the contrast is quite dramatic: both these Fenders are lightweights sonically as well as physically, but the Duo-Sonic has much more midrange spank. Could that be down to the aluminium guard?

But it’s the Mustang that wins the race to the amp, because we’re dying to find out if it really sounds like an offset or just a two-pickup Stratocaster in disguise. The answer, we’re relieved to report, is that this guitar is very much worthy of the model name on its headstock. 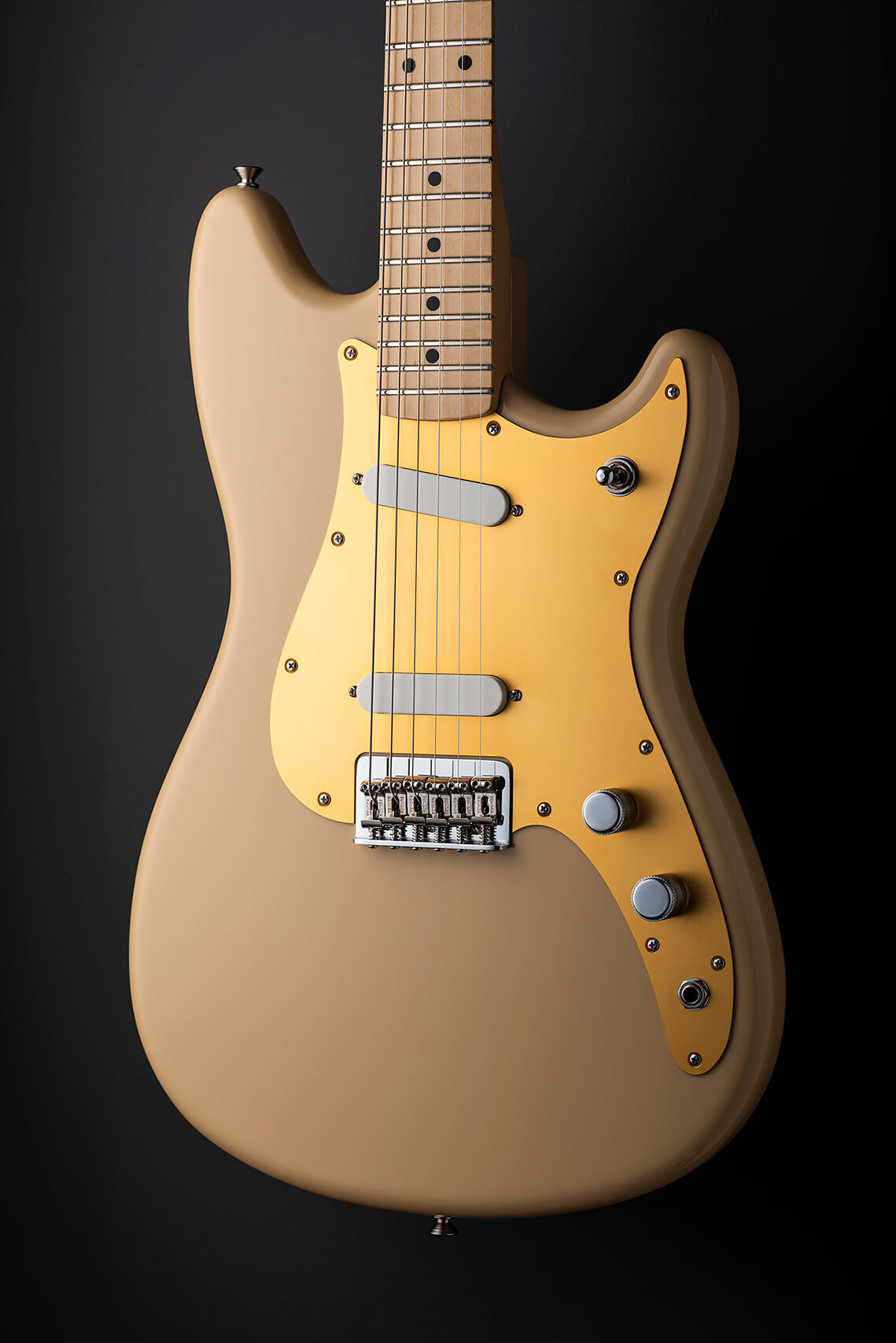 There’s nothing in these low-output pickups that’s going to make up for the lack of body in its acoustic voice; but if you’re primarily a rhythm guitarist looking for an easy player with bags of cheeky chime, this Mustang has to be a contender. Nicely fretted and well set up out of the box, it sings out through a clean amp with a biting top end and a tangy midrange that’s definitely more Jaguar than Strat or Tele.

“The Mustang isn’t a guitar for high-speed shredding or raunchy blues, but it doesn’t object to a bit of crunch”

The phasey middle position is especially tasty, and it’s surprising how little that fixed bridge detracts from the classic percussive character common to most offsets. It does bring one obvious disadvantage, mind: if you want to add atmospheric vibrato to clean chords, you’re going to have to shake the neck like a giant maraca.

It probably goes without saying that this isn’t a guitar designed for high-speed shredding or raunchy blues, but it certainly doesn’t object to a bit of crunch – or even grungey fuzz. You might just want to turn the tone knob down a few notches for the really heavy stuff, unless you’re prepared for the kind of stinging treble that can dissolve earwax.

Now let’s be honest, we turn to the Duo-Sonic expecting pretty much more of the same… and we’re proved wrong quicker than you can say ‘plunk’. This is a very different guitar, and not in the way we were led to anticipate by its more forthright acoustic voice. 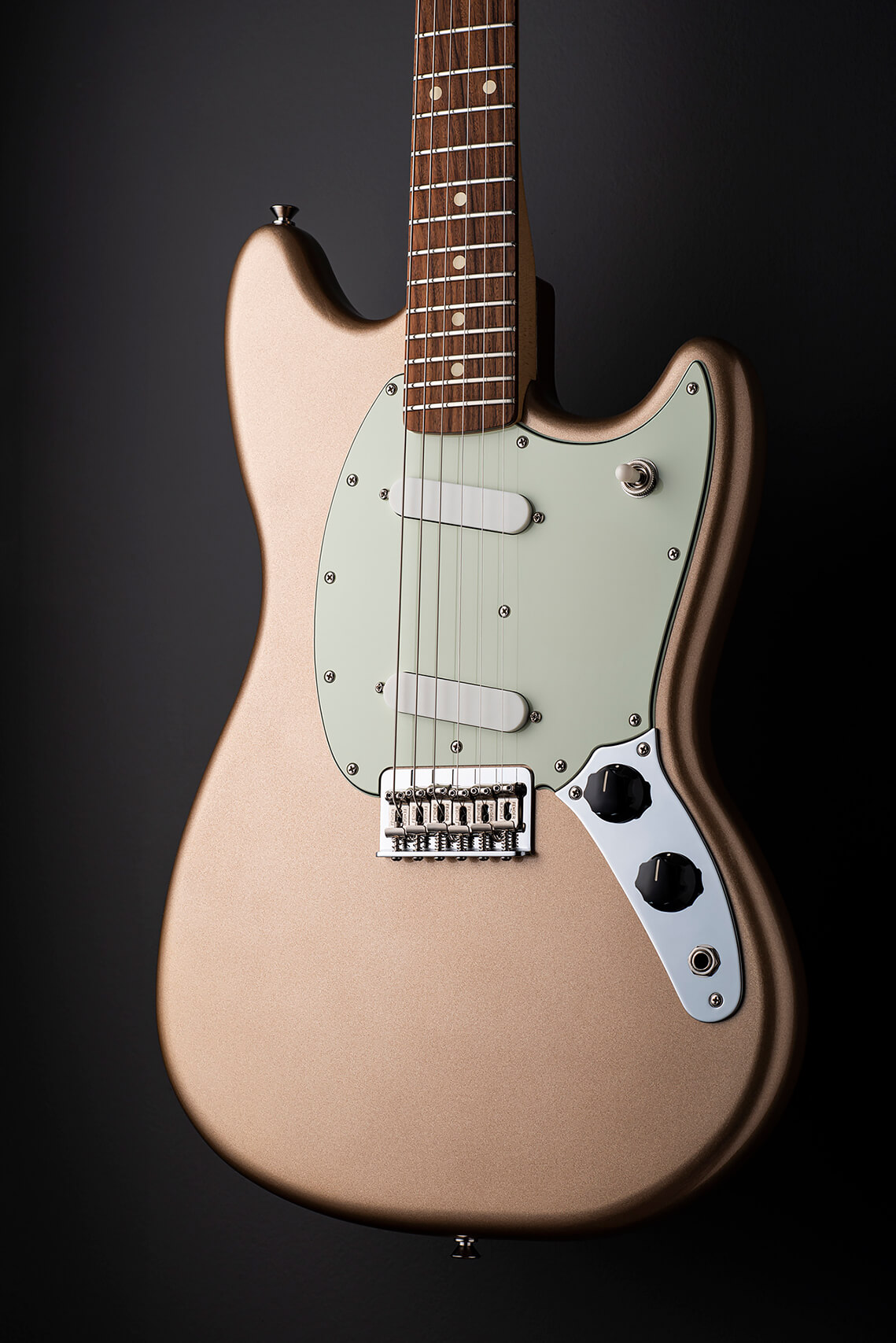 It can’t really be about the shape, so it must be down to the pickups. They’re a lot less perky than the ones in the Mustang – and that, combined with the short scale, is a formula for something ever so slightly timid. There’s no shimmery treble or richly complex midrange here, just a pleasantly balanced single-coil sound.

Stratocaster fans might be more at home with this model, as it offers some of the airiness and cluck associated with Fender’s most famous double-cut. Served with a chunk of overdrive it can get pretty soulful, most notably on the neck pickup, and at high gain levels its top end is easier to control than that of the Mustang. It’s a less immediately seductive guitar, however. While the Player Mustang has a you-know-you-want-me twinkle in its eye, the Duo-Sonic is most likely to appeal as a practical choice for those who like Strat-style tones but find full-scale guitars a stretch.

What’s clear in the end is that both guitars live up to the associations of their body types: the bluesy ‘straight’ guitar versus the impudent offset. Maybe that line isn’t so blurred after all.