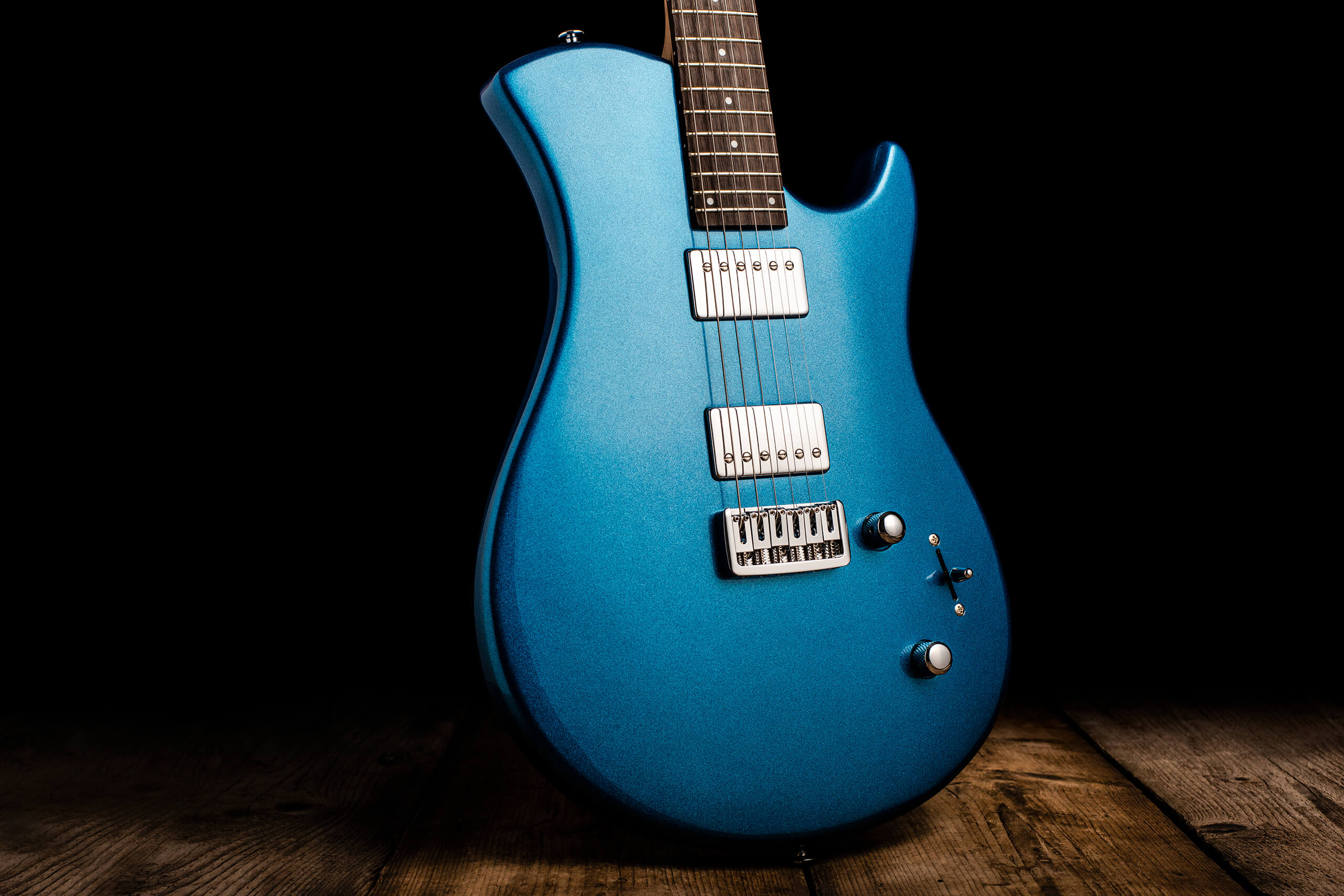 The high-end Swiss maker has unveiled a less dauntingly priced introduction to its instant pickup-switching concept – but can the Trinity really replace three regular guitars?

Wherever you stand in the debate about which parts of a guitar have the biggest influence on tone, we can surely agree that pickups are one of the most significant factors in shaping an electric solidbody’s core voice. In which case, one guitar that you can quickly switch between humbuckers, P-90s and single-coils is effectively three instruments in one, right?

Thinking of it in those terms will certainly help if this guitar’s price tag raises eyebrows – though it’s assembled in Asia and lacks some of the hi-tech design flair of its Swiss-made stablemates, the Trinity By Relish still costs £1,499. But pricing aside, whether you view it as one exceptionally versatile guitar or several different ones sharing the same skeleton, the Trinity will need to get all the basics right if it’s going to persuade guitarists that its hot-swapping pickup system is the future. After all, it’s a concept that’s been tried several times before with little success. 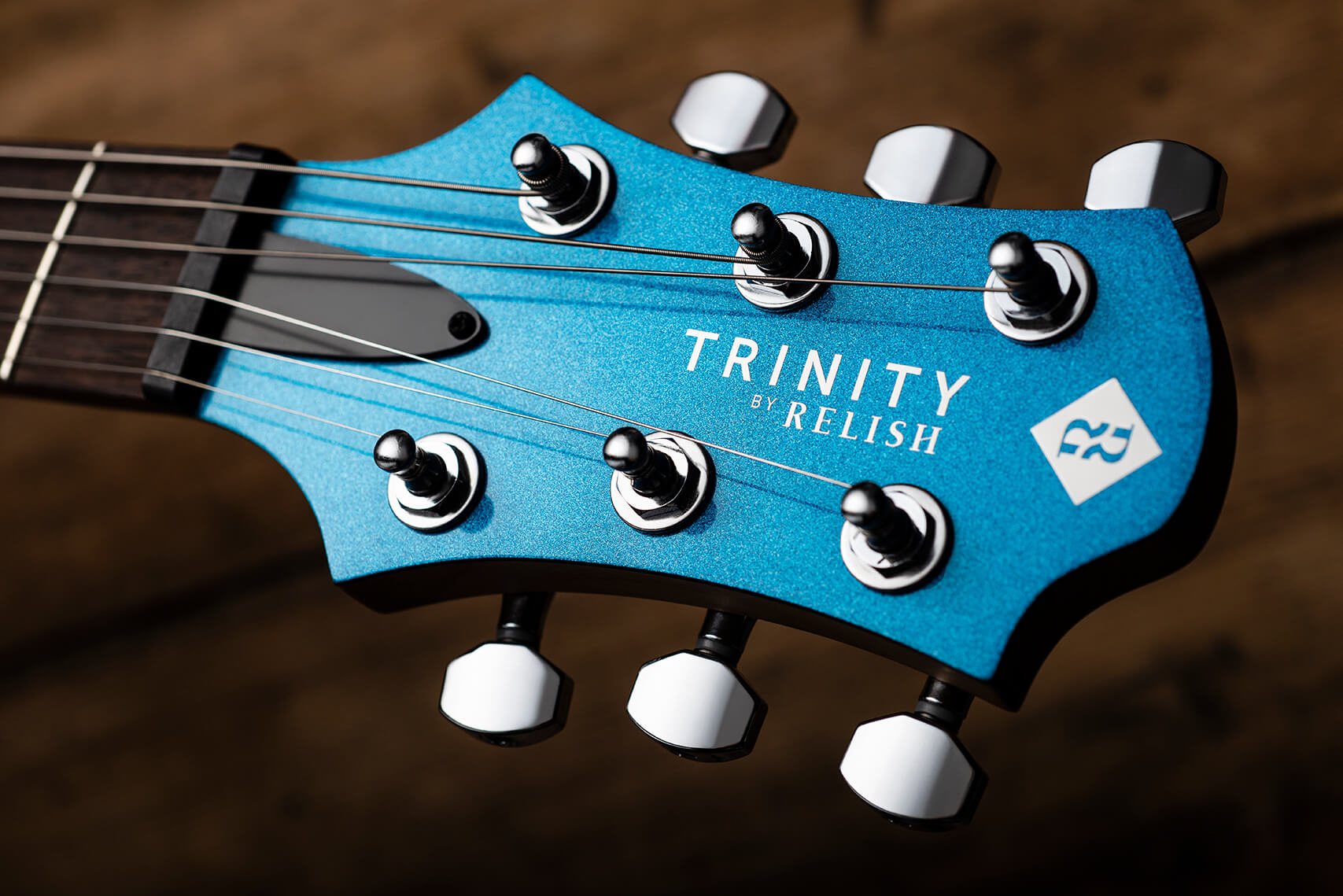 Most famously, Ampeg’s Lucite-bodied Dan Armstrong model from 1969 had a single pickup that slid in and out from the top. A number of later pioneers went with the rear-mounting approach – among them British luthier John Birch (with some help from a certain Tony Iommi) and even Gibson, who launched the limited-edition Les Paul Push Tone in 2008 – but for whatever reason, none of these would-be revolutions took off.

There’s no denying the user-friendly simplicity of Relish’s magnet-based system – which was a big part of why the company’s Mary One garnered a glowing 9/10 review in 2019. That Swiss creation also impressed us with a bunch of other forward-thinking features, from its strand-woven bamboo fretboard and extra-strong bent-back headstock to the ‘floating sandwich’ construction of its body. This is nothing to do with an astronaut’s lunch – it just means the wood laminate top and back are held apart from the central aluminium frame. 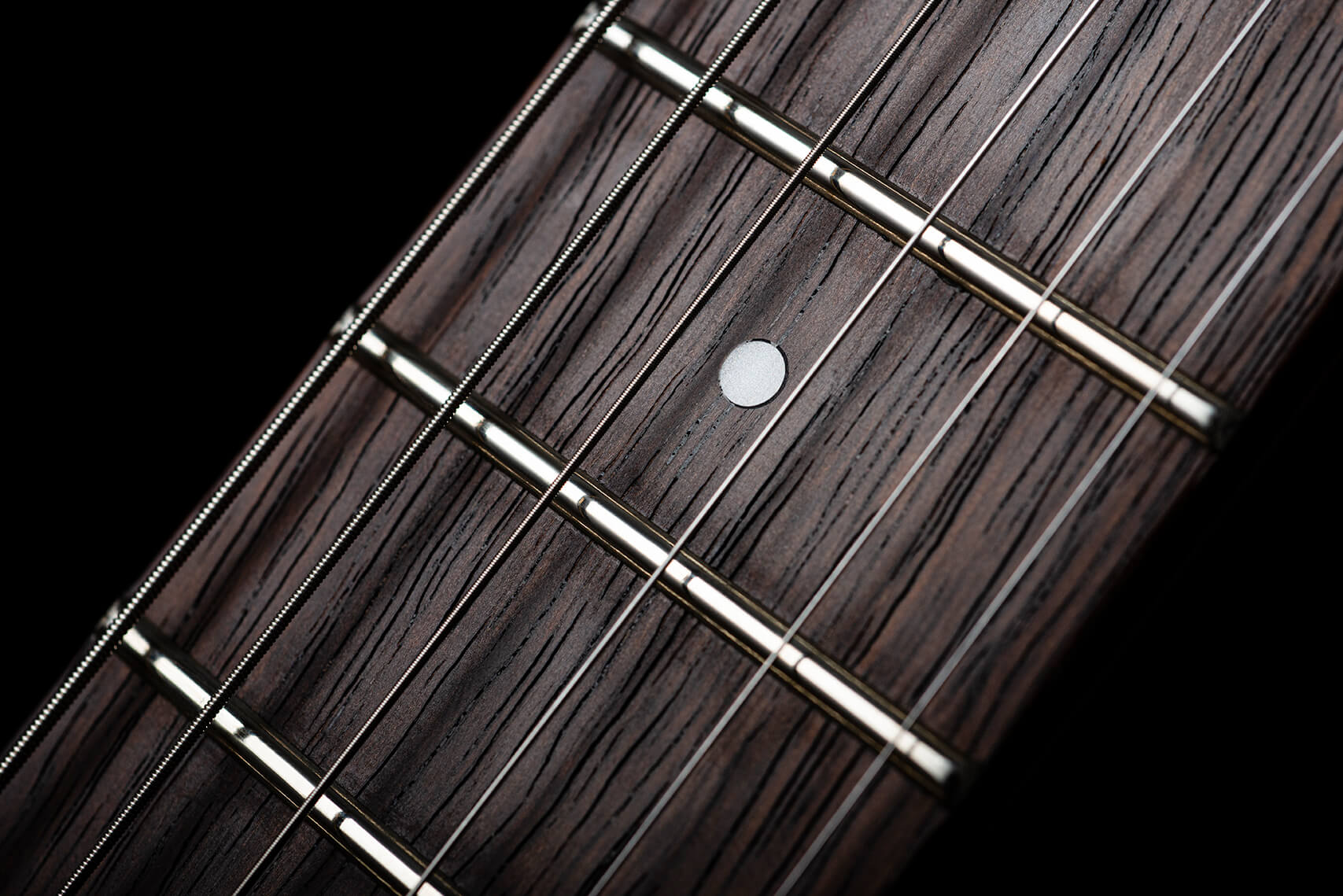 In order to shave two grand off the price tag, the Trinity has none of that futuristic stuff. The body is solid basswood, the fretboard is laurel and the headstock has a scarf joint running between the first and third frets. It also lacks the Mary One’s blendable piezo sounds, with just a simple hardtail bridge, three-way switch, and master volume and tone controls. Pickup-swapping aside, this is a traditional solidbody electric guitar – albeit a very sleek and striking one.

Build quality does not appear to have taken a massive hit with the move to Indonesia. Our review instrument’s 24 medium jumbo frets are neatly fitted, the neck join is impressively snug and the hardware feels slick and robust. The neck humbucker doesn’t pop out quite as easily as it should, but the openings on production guitars will apparently be slightly wider than on this prototype.

Note that although we’re testing the Trinity with three different varieties of pickup, the price shown here includes two pickup sets. Want more? Extra sets are available with Relish’s magnetic mounts fitted, including some Seymour Duncan and Bare Knuckle models, and prices start at around £300 a pair.

The Trinity arrives with humbuckers installed, so that’s where we’ll begin. This combination of Gibson-style electrics with Fender-influenced construction (it’s a bolt-on neck with a 25.5-inch scale length) seems to have become the default formula for modern indie builders, and it’s always interesting to find out where on the line between those classic reference points a guitar’s sound will fall. The short answer initially is near the Gibson end.

“The Trinity offers a remarkably diverse set of tones”

A well-balanced but unspectacular acoustic voice translates into an amplified tone that’s thick and honky, with plenty of bass thump but not much in the way of air. That makes the Trinity in humbucking mode a less than ideal choice for brisk rhythm playing, but does mean it comes to life with a dash of overdrive – or more than a dash. Chords are chunky but taut, while lead lines are smooth and assured.

Then we whip out the ’buckers to give Relish’s P-90s a spin… and the contrast could hardly be more extreme if we’d put down the guitar and started shredding on a flute. EQ-wise, there’s a significant drop-off in bass and a dramatic livening up of the top end, instantly transforming our refined noodling machine into a bit of a yob. The classic P-90 snarl is there, but in this context the result is closer to a Telecaster than an SG Special.

So what sonic territory does that leave the single-coils to explore? Predictably this is another step in the direction of Fender zing at the expense of Gibson fatness, but it might be further than some of us really want to go. There’s chime galore and loads of country cluck in the middle position, but it can sound somewhat clinical compared to a good Tele or Jazzmaster. 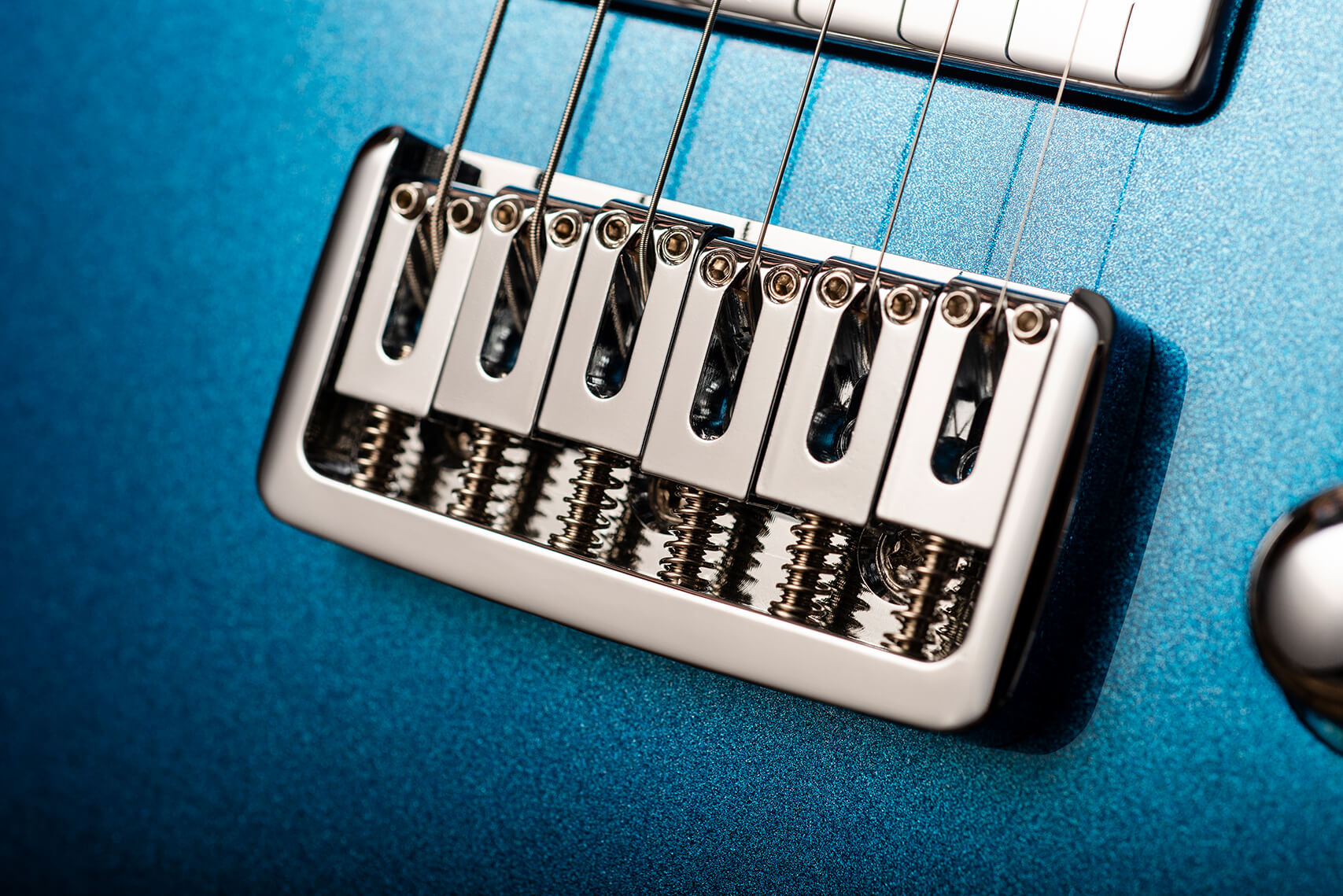 Ah, but there’s more, because mixing and matching between the pickup sets here gives us a total of nine possible combinations. Most obviously, a P-90 at the neck and a humbucker at the bridge – the classic Duesenberg combo – can work well for switching between crunchy rhythm playing and high-gain solos. This is actually the only arrangement involving a single P-90 that doesn’t cause quacky phase-cancellation in the middle position, but that’s not to say the others aren’t worth exploring.

“It comes to life with a dash of overdrive. Chords are chunky but taut, while lead lines are smooth and assured”

What the Trinity offers, then, is a remarkably diverse set of tones – of which some are admittedly better than others – for less than you’d probably pay for a couple of fixed-pickup guitars of comparable quality. But now imagine it with Filter’Trons, gold foils, toaster tops… this thing has huge potential as a tweaking platform for curious tonehounds, providing a solid base of well-made playability for whatever voices you wish to equip it with. All it needs is an even broader selection of adapted pickups then maybe, this time, the idea has a chance of catching on. 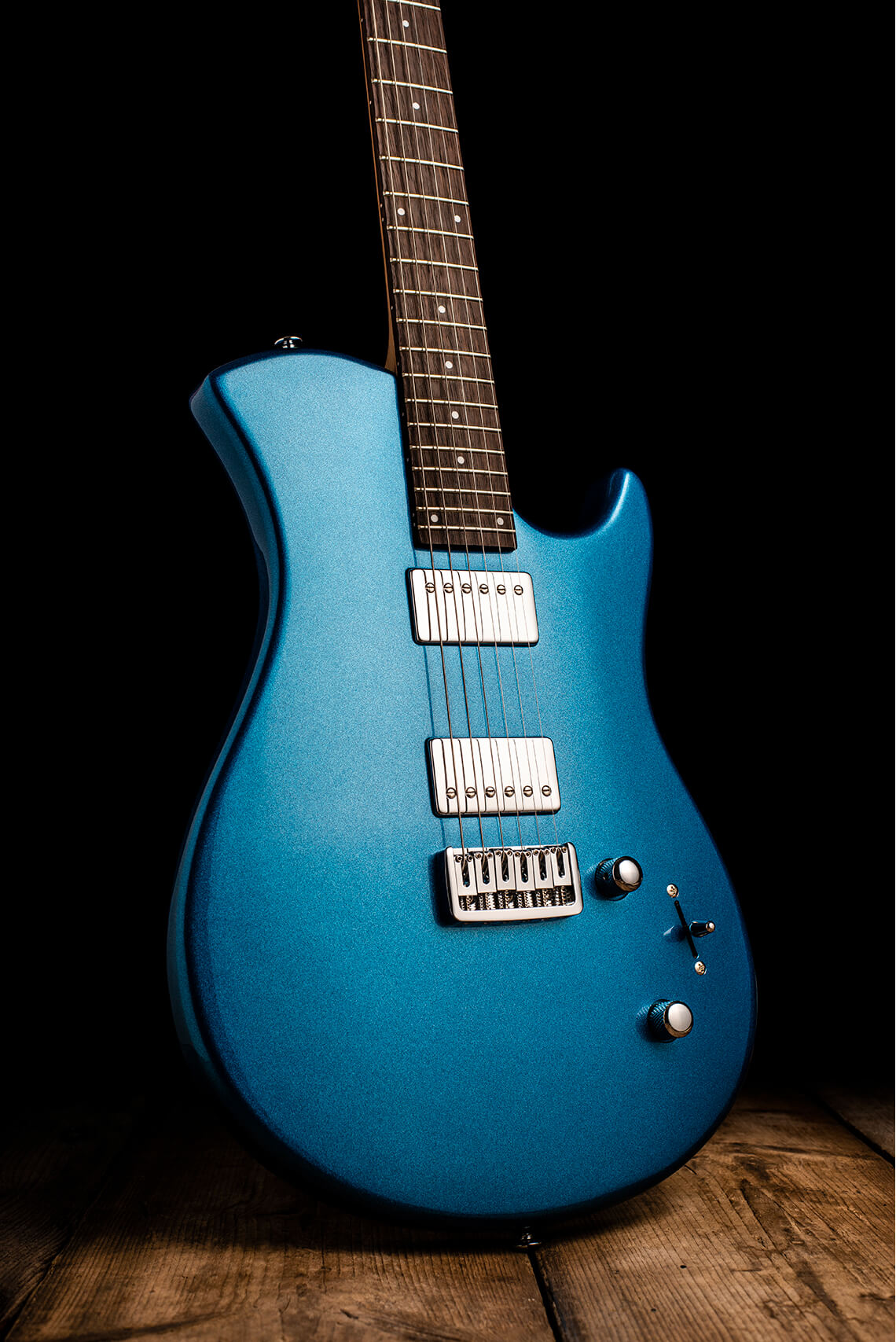