Fane may be a brand with a rich heritage, but it has been developing some very interesting new speakers. We test a potential giant-killer…

Sensitivity is high and there’s a 1.75-inch diameter voice coil and a relatively thin paper cone with light ribbing. We are pleased to see various different sizes of tags for spade connectors, but it you prefer you can solder instead. If you like to swap speakers, it’s nice to have the option.

To test the Fane A60, we compared it to two well-played Celestion alnicos with which many of you will be familiar – a Blue and a Gold. The amps used were a tweed Deluxe, our Rift PR18 and a Victory Sheriff 22, while the guitars were a Strat and a Les Paul.

The differences between the A60 and the Celestion Gold are very apparent. The Gold has a thicker, raunchier midrange bark and it sounds more aggressive – it’s long been a fine choice for rock tone with more dynamics and extended treble than you might get from a typical ceramic 12-inch.

The A60 is noticeably clearer and brighter. The Gold is bright, too, but with overdrive and a cranked-up amp the low mids can cloud definition in the upper frequencies when playing full chords. The A60 never loses its airy clarity and you can hear more of the subtleties of your pickups and playing.

The A60 scores highest on dynamic response; when you play lightly, you’re rewarded with extreme touch sensitivity and a treble response that’s lush, nuanced and almost delicate in a 50s Jensen sort of way. Dig in harder and the mids fill out Brit-style to enhance the amp’s overdrive characteristic.

So how does it compare with everybody’s alnico benchmark, the 15W Celestion Blue? The Fane actually sounds far closer to the Blue than it does the Gold. Shimmering ethereal treble? Check. Extreme touch sensitivity? Check. A tendency towards chime and jangle? Check.

The real difference is thickness of the lower mids, and in that regard the Blue and Gold share a family resemblance. However, much depends on how much power the A60 is getting and when driven harder, the low mids fill out and the overall response takes on a gently compressed quality that is extremely player friendly.

Ultimately, if power handling wasn’t an issue we’d be hard pressed to choose between the Blue and the A60. The Blue has an undeniable magic and while the A60 doesn’t quite match the Blue’s harmonic density, it does sound clearer, better defined in the low end and just a tad smoother. Curiously, even though the stated sensitivity figures are identical, the Fane seems a bit louder.

In recent years, some speaker manufacturers have been on a mission to create a high power handling alnico 12-inch with the tone and feel of a classic low-power driver. By not shooting for the moon in power handling terms, Fane has got it spectacularly right with the A60. 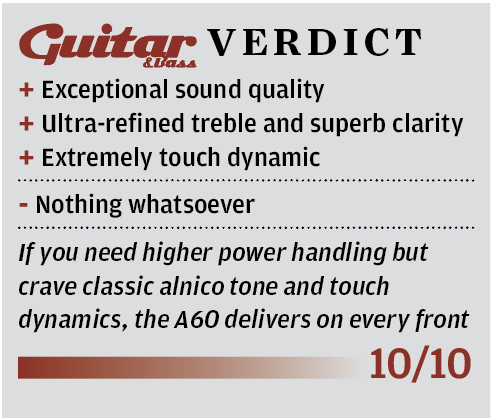