Fender’s latest Deluxe variant is tailored to The Edge’s arena-sized preferences. Has Huw Price found what he’s looking for? 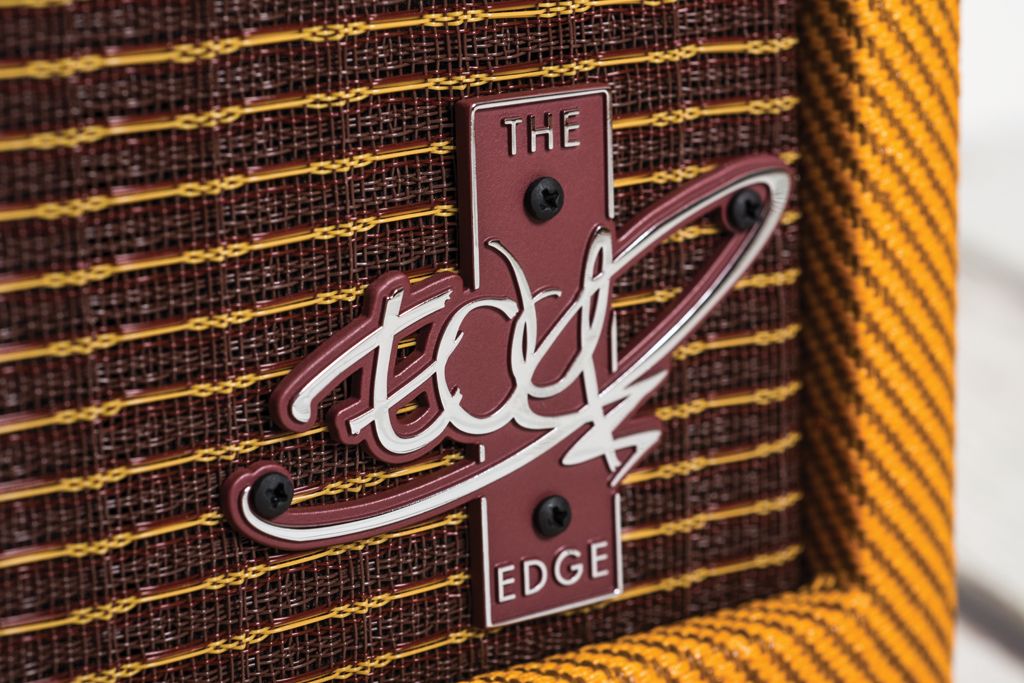 U2’s Edge is so closely associated with Vox AC30s, the very notion of an Edge signature tweed Deluxe may seem as incongruous as a Rory Gallagher signature Les Paul or a Kerry King signature Twin Reverb. If you have doubts, check out Fender’s video demo featuring the man himself, and you may conclude it’s actually a pretty decent fit.

In part, this must be down to Edge’s preference for the Celestion Blue alnico speaker. No doubt this is a carry-over from his Vox amps, but many other 5E3 Deluxe fans have already concluded that it’s the best-sounding speaker for this timeless circuit. 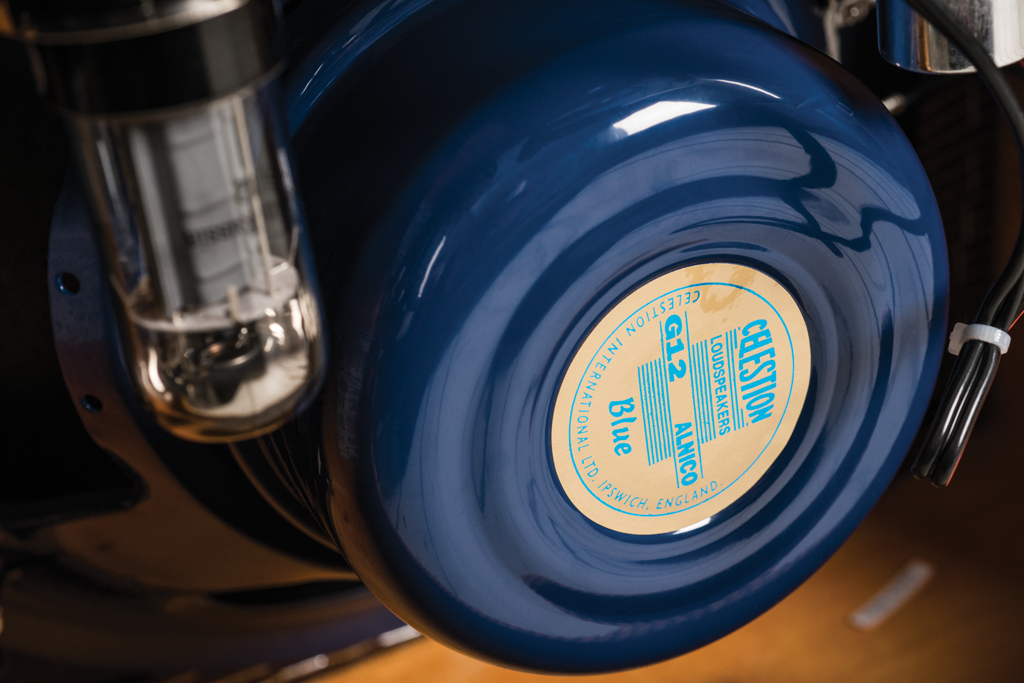 As well as adding its undeniable sonic charms, the Blue is more efficient than the alnico Jensens that were originally fitted to the 50s Deluxes and the reissue Jensen P12Q that was installed in Fender’s ’57 Deluxe reissue. This means a Blue-loaded Deluxe will have more clean headroom and it will be louder, so it’s great to see Fender getting on board with probably the best 5E3 mod you can make.

Peeking inside reveals traditional vulcanised fibreboard, with eyelets and modern-spec components. None of the resistors look like carbon comps and the signal caps are film types. The tube complement includes a Ruby GZ34 rectifier, two Russian 6V6s and two Groove Tube 12AX7s. Back in the 50s, Fender used a lower gain 12AY7 in the first preamp stage and this amp’s tube chart actually specifies a 12AY7 rather than a 12AX7. We’ll revisit that one later… 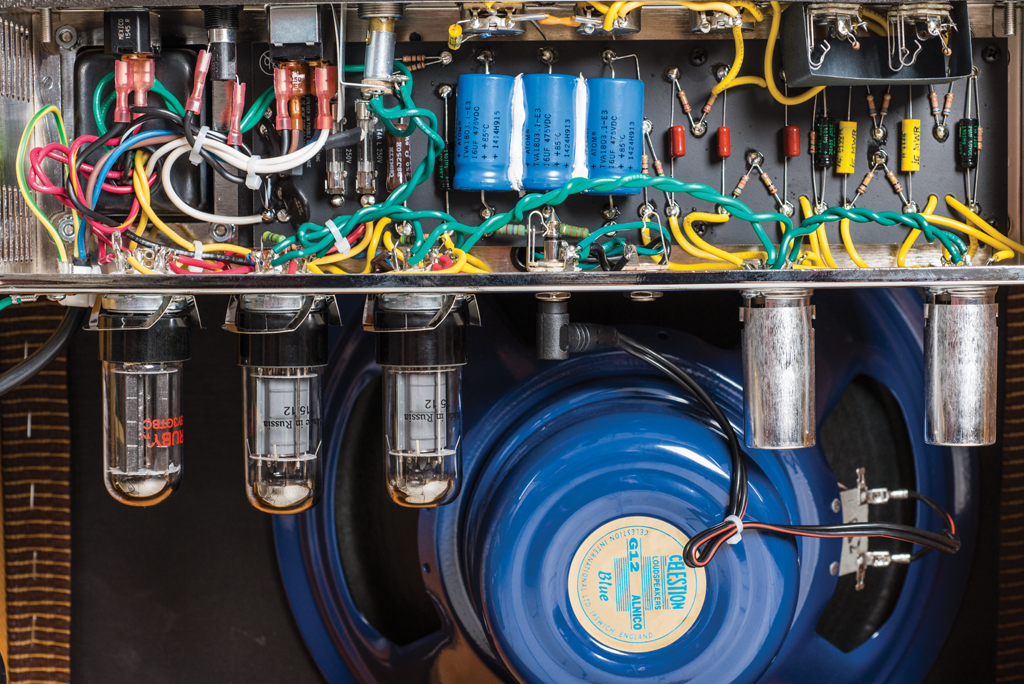 The cabinet has a leather handle, and is made from solid pine coated with some type of toner for an aged (but not relic’d) look. The tweed covering has a lacquer coating and it looks a little more orangey amber than a vintage example might. Externally, the only departures from vintage spec are a nameplate with no reference to Fullerton; an Edge logo in the bottom right-hand corner of the speaker cloth; a metal cage for valve protection and insulating covers over the switches.

Something happened when I started testing this amp that may seem too good to be true. My mate Simon had sold a bunch of gear and treated himself to a 1959 5E3 Deluxe, along with a brand new Celestion Blue to replace the torn vintage Jensen. He asked me to install the speaker and give the amp a check over, so I had the Edge Signature reissue and an original to compare – both with brand-new Celestion Blue speakers. The results were revealing. 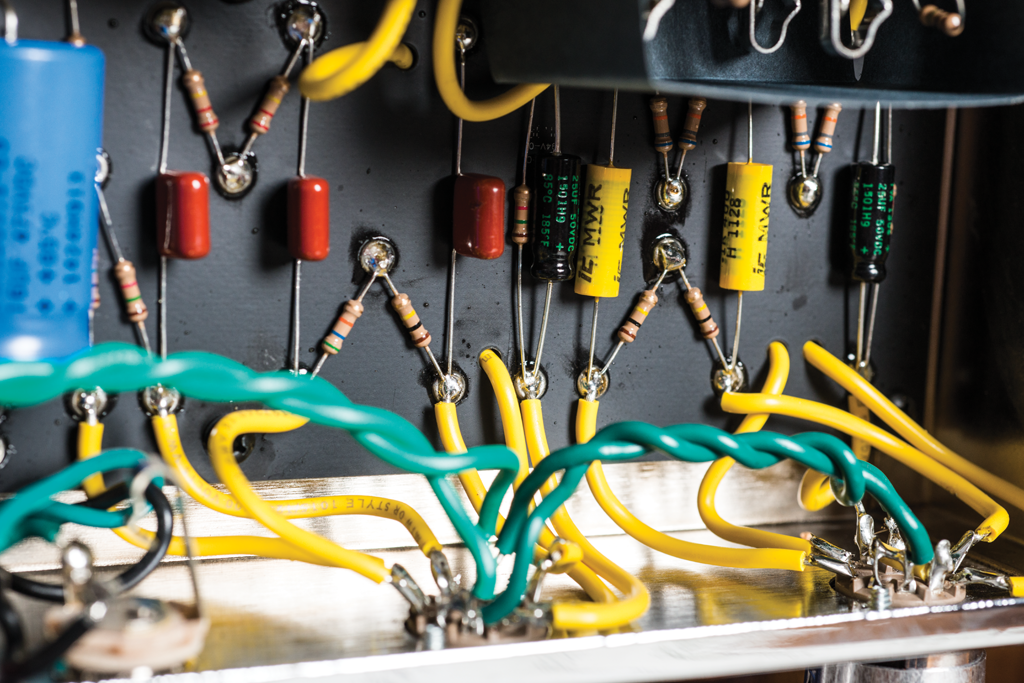 With volume and tone set identically at half way up, it was obvious these amps have pretty much identical circuits and speakers. However, there were subtle tonal differences that may or may not be perceived as positive, depending on what you want from a tweed Deluxe.

The Edge version has a thicker and more compressed tone, with a little more weight in the low mids. The overdrive is rich and creamy, but it has enough grit and raucousness to retain those visceral tweedy thrills. In contrast, the vintage 5E3 is slightly less gainy and the lack of low-mid lift allows the mid frequencies to breathe more freely. The 50s model also sounds a little clearer, more open and less shrill.

The real differences become more apparent when you turn the volume down. With the old amp, the overdrive ebbs gently away to reveal delicate and shimmering clean tones with almost supernatural touch sensitivity.

Turning down the volume control on the Edge model obviously makes the amp quieter, but it doesn’t really make much difference to the amount of overdrive. Coming at it from the other direction, the volume control ranges from one to 12. By the time the chicken head knob is pointing towards two, the Edge Deluxe is already overdriving quite heavily. All this happens with a Strat, so with a set of low-wind PAF replicas there’s no clean headroom whatsoever. 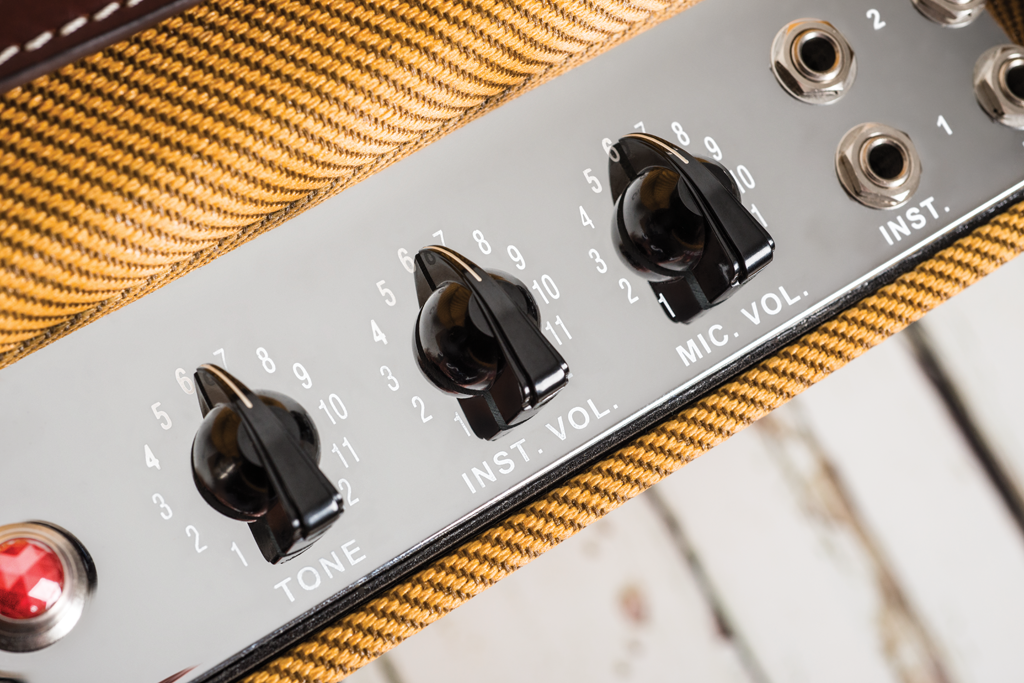 As supplied, the review Edge amp did certain 5E3 things really well, but the novelty value of instant overdrive wore off pretty quickly. Fortunately, there’s a solution – simply follow Fender’s own advice on the tube chart and stick a 12AY7 in the first preamp valve position.

Having done that, I discovered just how good a 5E3 replica the Edge version really is. Gain became controllable, the clarity improved and the reduced compression enhanced the touch dynamics considerably. In fact, it sounded incredibly close to the 50s 5E3, which was actually running a 12AX7 for V1 throughout.

So why do these amps sound so different, when the speakers are identical and both are running modern rather than vintage valves? The power-valve bias components in the Edge model are vintage correct; however, the voltages are significantly higher. I read 440v on the 6V6 plates and well over 200v on the 12AX7 plates. 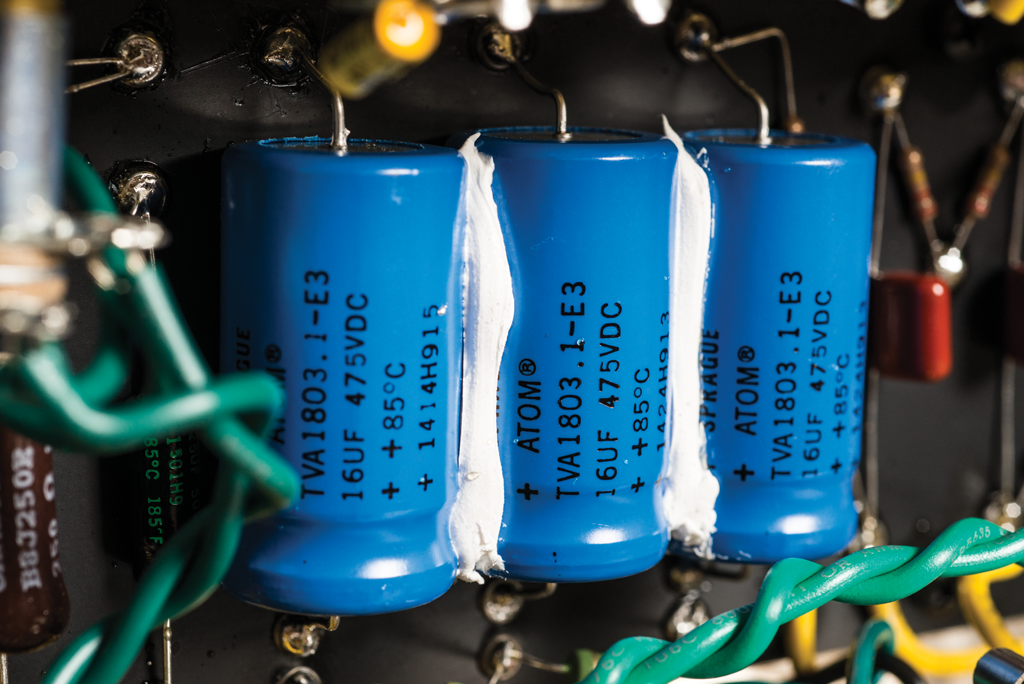 The vintage Deluxe readings were 390v on the 6V6 plates and below 200v on the 12AX7 plates. Normally, I would associate higher voltages with more clean headroom but, as discussed, the Edge 5E3 didn’t conform to expectations.

It’s doubtful Edge has completely abandoned his AC30s, so maybe he uses those for his cleaner tones and uses his tweed Deluxe for overdrive. If that’s the case, running a 12AX7 in the front end makes sense. However, if you would prefer to explore the full range of tweed tones, there are two ways to do it.

Firstly, you could perform that simple valve swap – or secondly, you can play with the Edge 5E3 cranked up and your guitar volume turned down. So long as you have a treble-bleed capacitor, you’ll get all the breathy jangle and ringing chime you need, and this version of the 5E3 reveals its considerable hidden charms and tonal versatility. 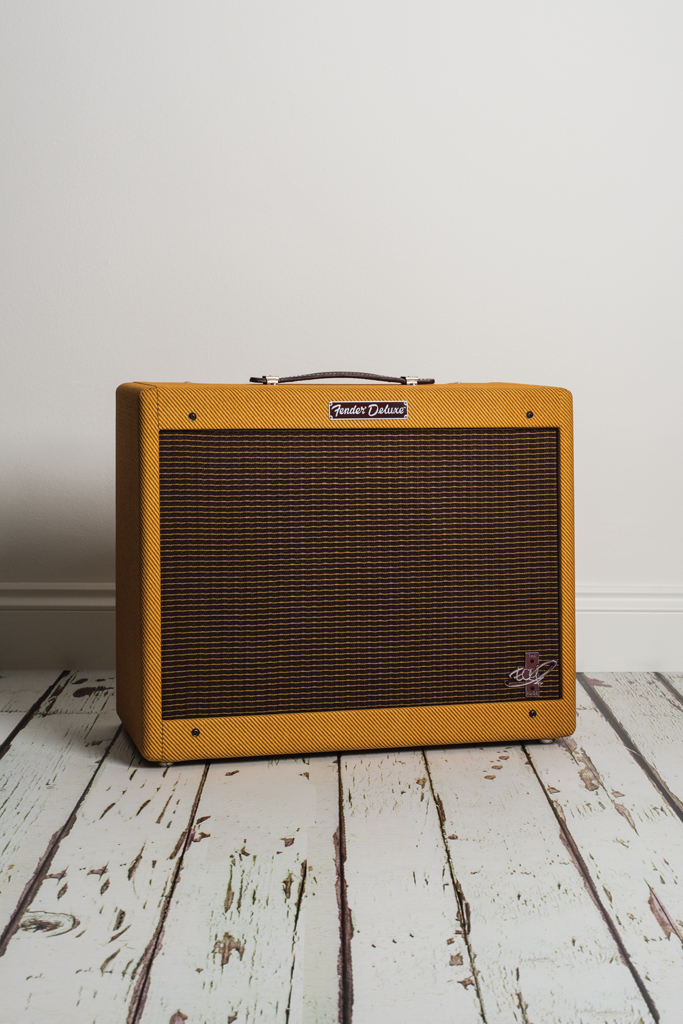 All things considered, Fender has come up with a great-sounding twist on the 5E3 formula and, by associating itself with such a big-name player, has been able to bypass vintage correctness and make the mods and upgrades necessary to compete with the boutique boys. Considering it comes pre-loaded with an expensive Celestion Blue, the street price is very competitive. It undercuts much of the boutique competition and as a Fender product, it should retain its value pretty well. 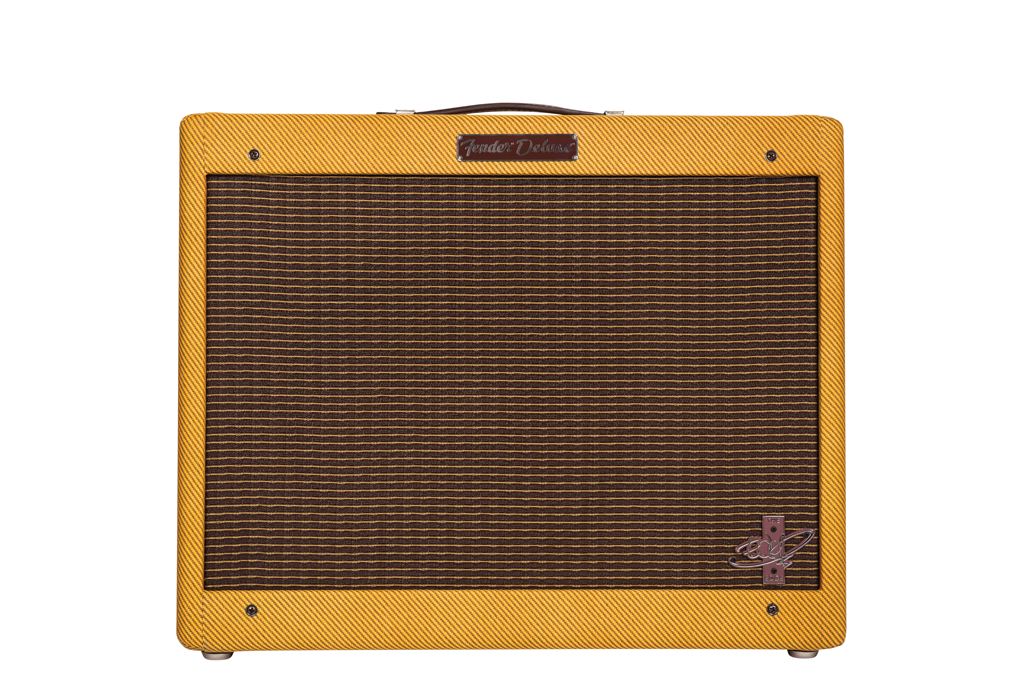 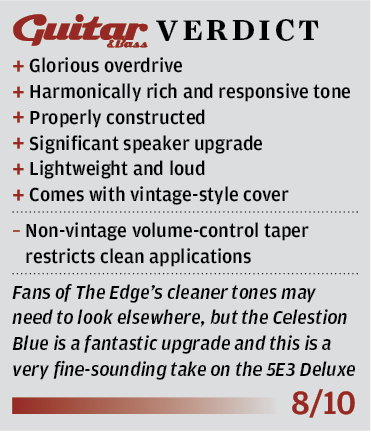