Jackson Ampworks’ The McFly brings vintage Fender circuits into the present with some modern twists. 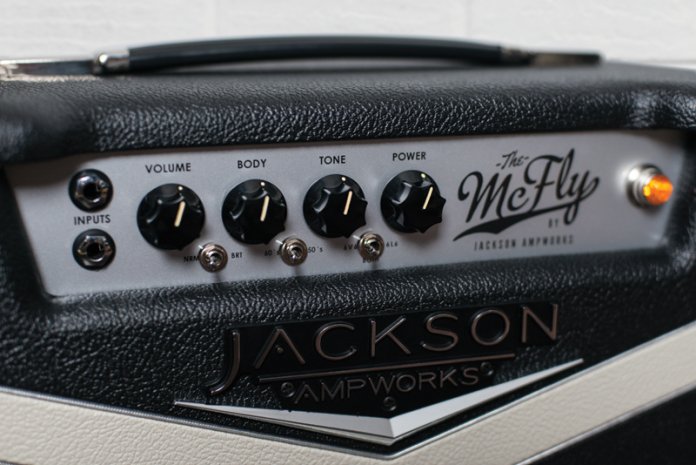 Jackson Ampworks is a small boutique amplifier company based in Fort Worth, Texas. Its design ethos combines an old-school `simple is best’ approach to signal path with modern manufacturing practices.

Mallory 150 signal capacitors and carbon composite resistors are mounted on an 1/8-inch printed circuit board, with two-ounce copper traces, and silver-plated Teflon wire is used throughout. Other features include centre-point star grounding, Alpha potentiometers and Neutrik connectors. 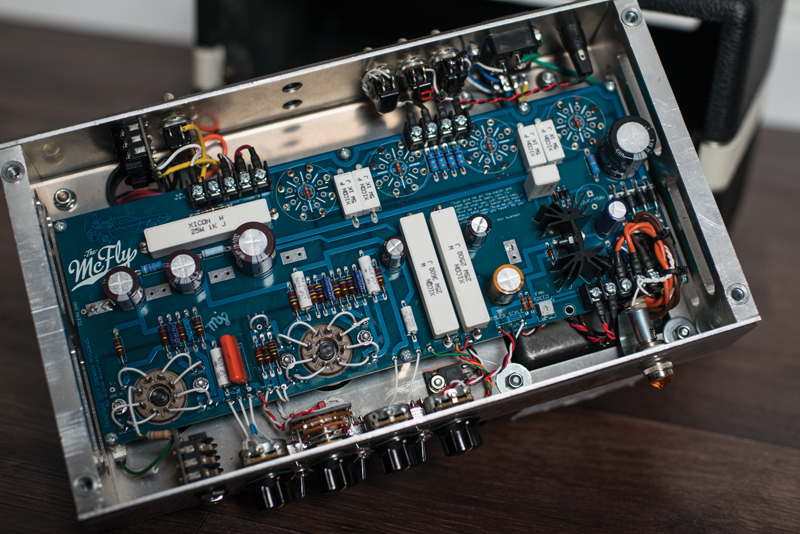 The McFly was designed to emulate the tones of small and simple Fender amplifiers from the 1950s and 1960s. Rather than choose between 6V6 and 6L6 valves, Jackson has installed a pair of each ± and each pair can be used individually or in combination.

The choice of 6SN7 preamp valves indicates that the McFly is not intended to be a high-gain amplifier, because the amplification factor is substantially lower than a 12AX7’s. But these octal valves were used very widely during the 1950s and are highly regarded for their tone in guitar and hi-fi amps. 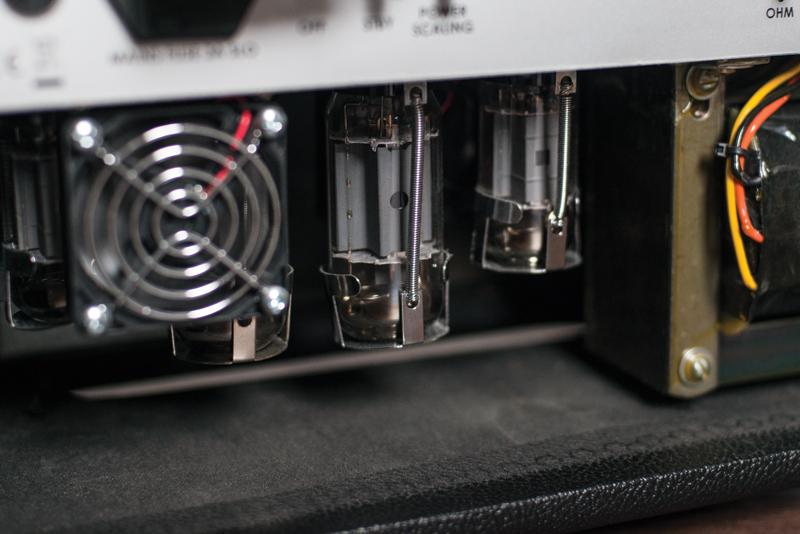 Jackson has broken with tradition by choosing an over-spec’d 200-watt output transformer to ensure that tight low end is maintained at all levels. Bypassable power scaling is preferred to a master volume, and there’s a six-way body switch for low-frequency voicing, that works in conjunction with a tone control. The bright switch places a Fender-style capacitor across the volume control and the 50s/60s switch re-voices the amp – presumably by altering voltages.

The chassis is mounted upside-down in the cabinet and a cooling fan has been fitted to prevent overheating. Noisy fans can be a drag, but this one is quieter than the amp’s noise floor ± and the McFly runs very quietly indeed. Jackson’s website shows the McFly in combo guise with a Celestion Gold Alnico speaker. There are two speaker outputs and an 8/16 impedance switch, so I ran the amp into an open-back cabinet loaded with a Celestion Gold. 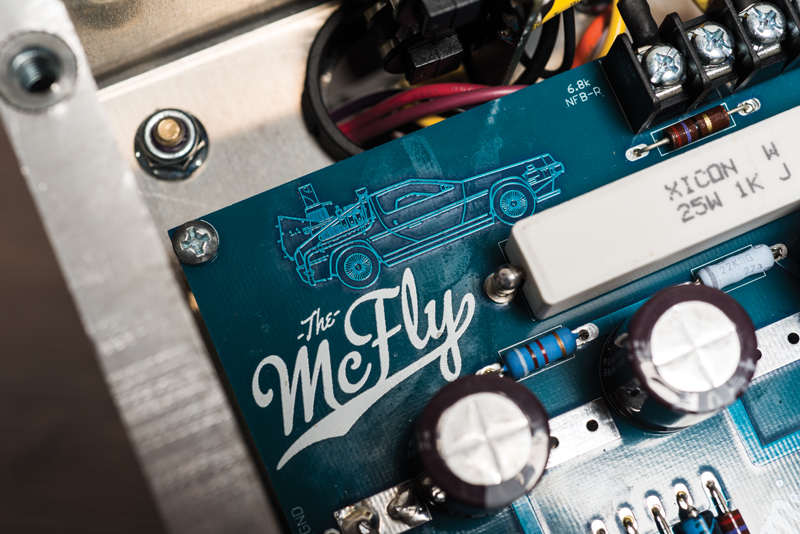 I found the body switch effective and useful because it offers various degrees of bass roll-off at carefully chosen intervals. As well as helping to shape the bass and low mids, it can help to tighten up low-frequency response at higher gain levels. This retains focus and definition and puts you in control of any tweedy sponginess.

The valve switching is a tremendous feature and works flawlessly. All four power valves are cathode-biased JJs and they’re arranged with a 6V6 and 6L6 pairing to drive each phase of the waveform. The valve switch is labelled 6V6/both/6L6, so in addition to three tones, you get three power levels.

It’s also a fantastic way to experience the differences between these two iconic power valves properly. The 6V6 side effectively pushes the midrange with both the upper and lower frequencies slightly rolled off.

In contrast, the 6L6s have a wider frequency response with extended lows and more airy treble. The midrange is probably much the same as the 6V6s, but it’s less apparent due to the extra bass and treble. There’s also much less compression and a quicker transient response that can lend a percussive edge to chords and single notes.

As hoped, the`both’ setting provides the best of both worlds. It is noticeably louder, plus combining the 6V6s with the 6L6s means you keep the full frequency range while simultaneously fattening up the midrange. 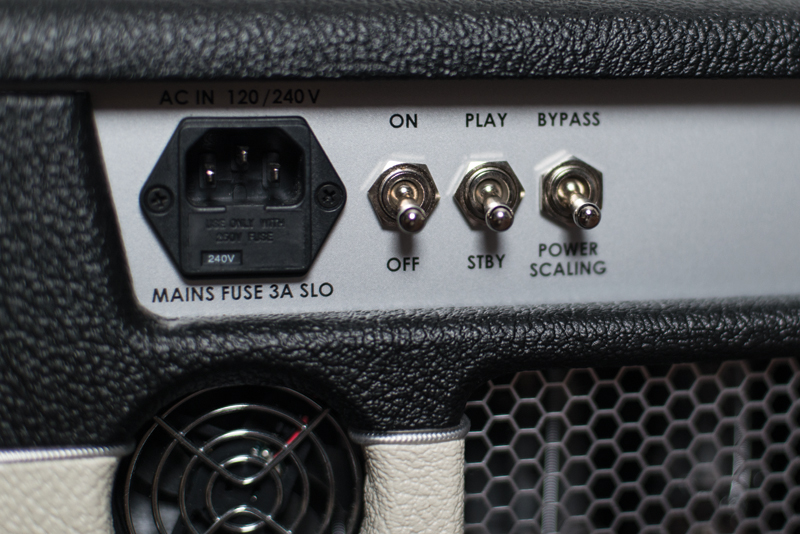 Regardless of valve selection, the 50s setting is slightly louder than the 60s setting and the mids are less scooped. It doesn’t take much to push the McFly into overdrive, and the key to clean headroom, and hitting the sweet spot where playing dynamics control the dirt, is learning how headroom decreases as body is increased.

With the octal front end, I had expected a slightly softer and sweeter treble response. In reality, the McFly’s sound is naturally bright through a Celestion Gold, and it can veer into edginess. That’s OK, because most amps do, but the McFly’s tone control takes some getting used to.

Rather than thinking of it as a treble roll-off, as described on Jackson’s website, it makes more sense to use it as a treble boost. I kept the tone knob most of the way anti-clockwise to dial in tones that I found comfortable and familiar. For the most part, I felt no need to engage the bright switch, even with humbuckers. However, it does add a nice glassy sheen to cleaner sounds.

Cranked up, the McFly can generate extreme levels of overdrive. Beyond its sweet spot, at around one o’clock, the tone takes on a slightly fizzy edge that is more Marshall than Fender, but that could be attributable to the Celestion. 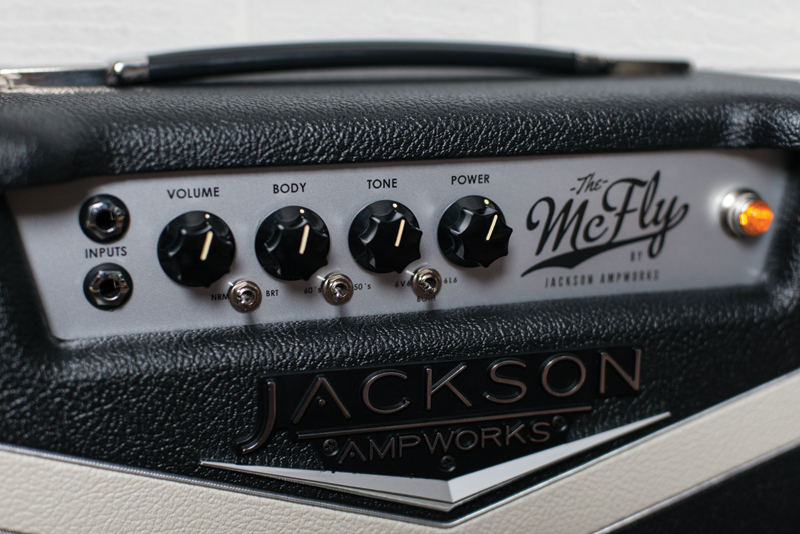 At higher levels, the McFly becomes a lot less sensitive to volume control manipulations. To control your tone from a guitar, I found the lower-level input more conducive, and it worked really well with a clean boost in front.

With the power control set for minimum attenuation, I could not hear any difference – whether it was bypassed or not. It was an encouraging start, but as power is attenuated the McFly’s tone gradually acquires an oddly ragged distortion with an uneven decay.

It’s not entirely dissimilar to a fuzzbox or overdrive that’s being starved of current, but Jackson’s power scaling is most effective when it is used subtly. Very low power settings are not especially musical, and background noise levels do not decrease along with the guitar signal. Some may feel that the 200-watt output transformer results in less sonic character, but it does make for a tone that’s more usable and less niche. The power scaling did not particularly impress me, but the multiple output valve idea is excellent ± and it works superbly in this amp.

The Fender connection might be even more convincing with the addition of some Jensen-style speakers, rather than a Celestion Gold, and maybe a touch of reverb, but the McFly is a very well made amp that does succeed in capturing an era-spanning range of classic Fender-like tones, while extending the tonal range, dynamic response and user controllability. 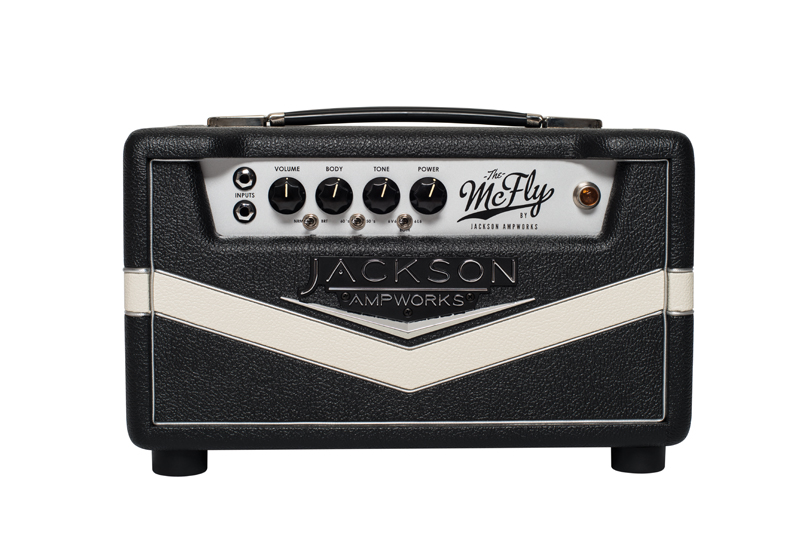 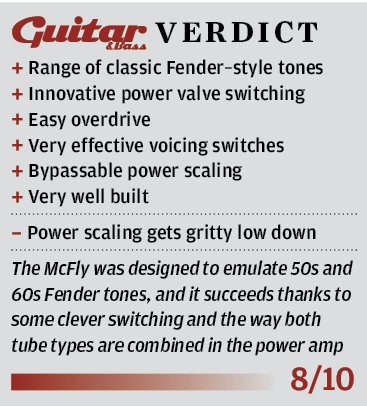