Surf’s up, as Chris Vinnicombe checks out a cool twang machine named after a Californian beach city. It’s our review of the K-Line Del Mar… 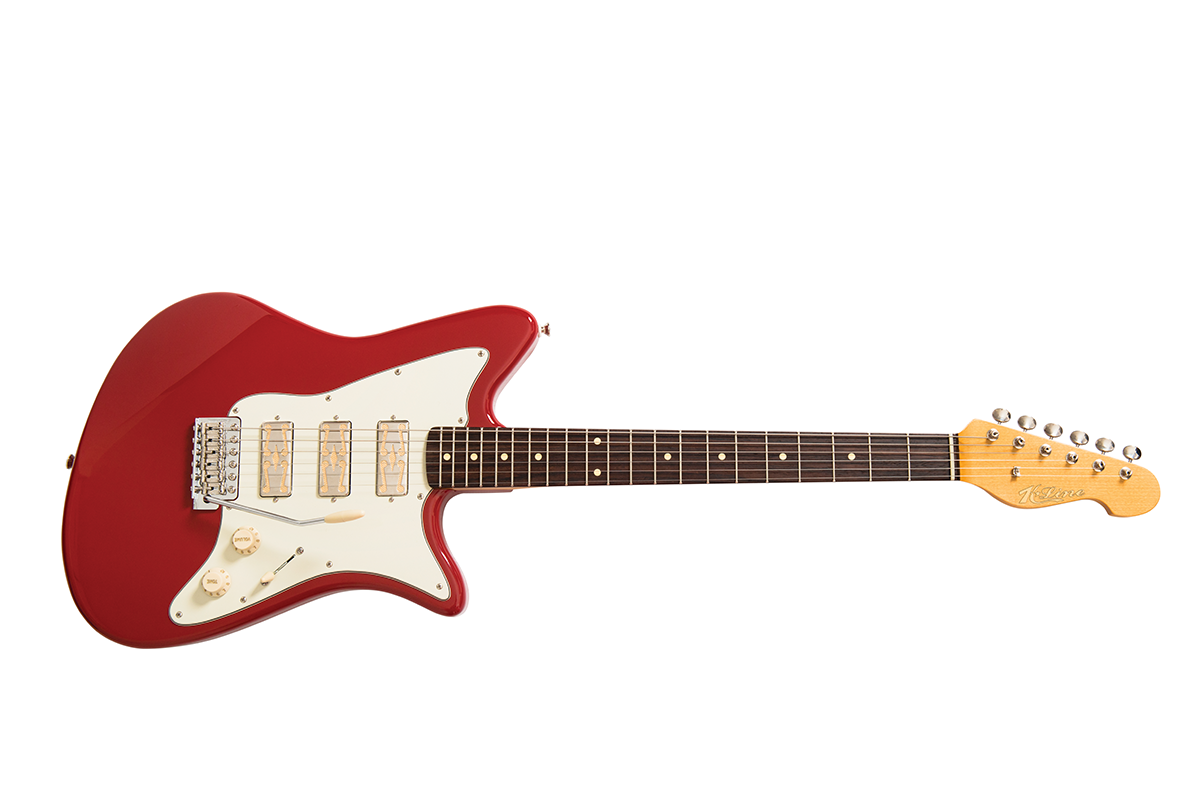 K-Line Guitars is the brainchild of Chris Kroenlein, a man with decades of experience both in guitar building and repair, along with automotive body painting.

Kroenlein has been hand-building instruments in his workshop in the suburbs of St Louis, Missouri since 2004 and our previous encounters with his bolt-on electrics have been thoroughly positive. Particularly memorable was a gorgeous Truxton T-style that was light, wonderfully resonant and had a neck to die for. 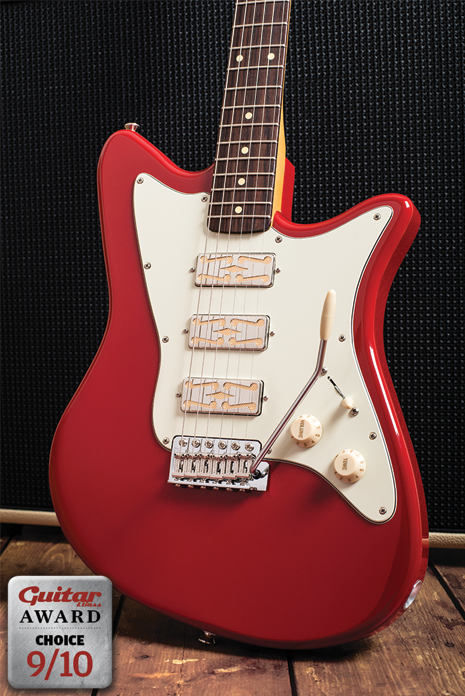 Launched in January, the Del Mar is a more original, offset design, which nods heavily in a westerly direction towards Fullerton and the ocean beyond… but also has an interesting vibe of its own.

Kroenlein’s experience of replicating vintage finishes means his aged paint jobs are of a very high standard but here, we’ve got a box-fresh, pristine Dakota Red nitrocellulose finish with a large, three-ply mint-green scratchplate. The contoured alder body follows shortened Jazzmaster lines until you reach the treble-side cutaway, which has a flared horn reminiscent of a 1960s Teisco ET-200. 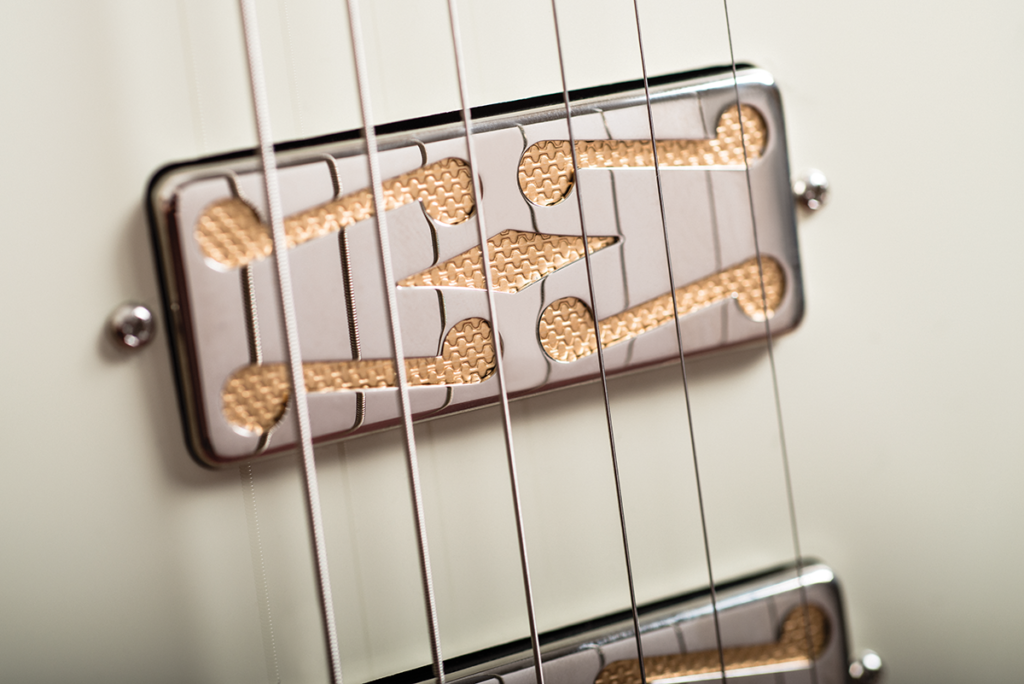 The Klein pickups are an inspired choice
It’s a cool combination of surf-era and pawnshop influences that certainly says ‘twang’, and this aesthetic is accentuated by a trio of in-vogue Gold Foil pickups wound by respected boutique pickup maker Klein, whose vintage-reproduction Strat units have been hailed in these pages in the past.

Though the covers of these Mustache Diamond Gold Foils are designed to resemble old DeArmond single-coils, there are no adjustable polepieces here and the pickups are in fact Firebird-sized mini-humbuckers with bar magnets. With 6.0 (neck), 6.4 (middle) and 6.7k-ohm DC resistance ratings, we’re firmly in vintage territory.

The bolt-on, satin-finished maple neck is described as a medium C and it fattens out satisfyingly above the fourth fret. The fingerboard is an attractive slab of rosewood with a rich, deep-red colouration and player-friendly rolled edges. 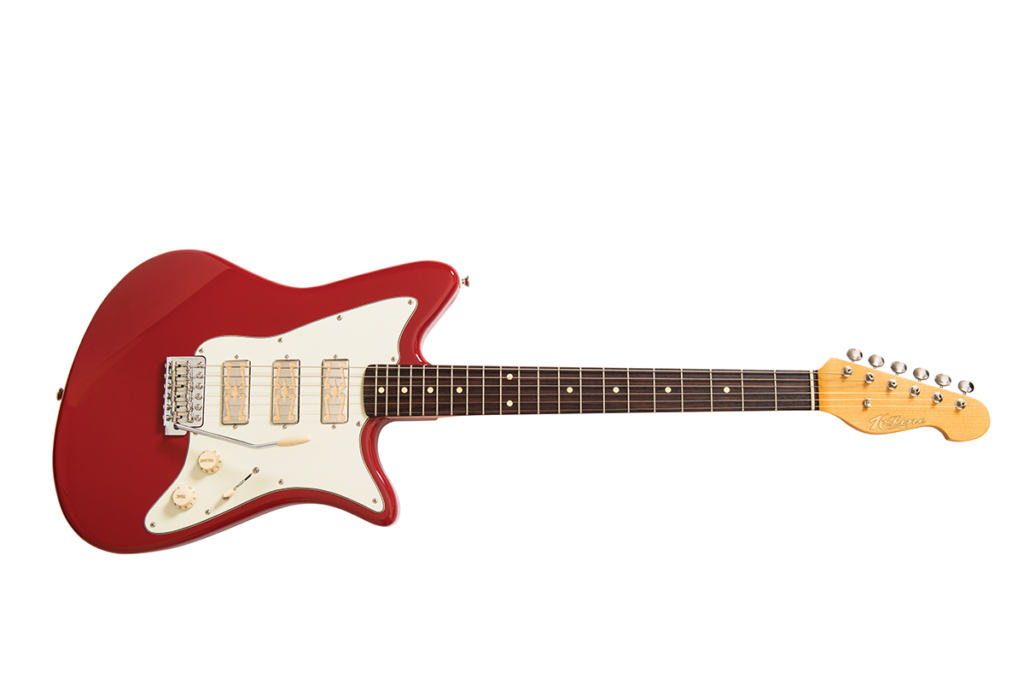 The 10-inch ’board radius and medium-jumbo fretwire provide a comfortable playing surface for string bends and lead work but, happily, it’s not so flat that the retro-looking Del Mar ends up feeling modern to the point of incongruity. Aside from a few barely visible tool marks on the fretboard, the standard of construction and finishing is excellent.
Hardware choices are shrewd; full marks to Kroenlein for opting to use the Electrosocket jack socket cup – it’s become a nigh-on-essential upgrade for Telecaster users in recent years and is much more stable and roadworthy than a vintage-style arrangement.

Similarly, the Wilkinson vibrato offers subtle innovations: the push-in arm retains a classic feel thanks to its nylon collar, while the block’s staggered string spacing is compensated for intonation adjustment, ensuring that each string has the same saddle-to-ball-end length. All that said, as you look at the vibrato from behind the bridge, the bottom-right hand corner of the steel base plate is a little sharp – you’d have to be very unlucky to skewer a fingertip, but we’d still prefer to see the point rounded off.

Imagine a ‘Stratotele’, with the springy clarity of a great Strat and a generous slice of the satisfying punch and percussive dynamism of a Tele – that’s pretty close to what the Del Mar delivers sonically. You get lots of detail too, so it’s a wonderfully expressive instrument, with special rewards for those who favour fingers over a pick, though the stinging attack of a hard pick near the bridge is just as moreish.

Add a bit of tweedy break-up and you’ve got Dave Davies down at the bridge and Jimi up at the neck; Stones fans are also in for a treat, as the bridge pickup does a great Keith sound with a beautiful balance of grit and jangle – then just add spring reverb for a wiry, Ry Cooder Sister Morphine slide tone. And while we’re splashing around in reverb, it’s worth noting that the Del Mar surfs like a pro, too. 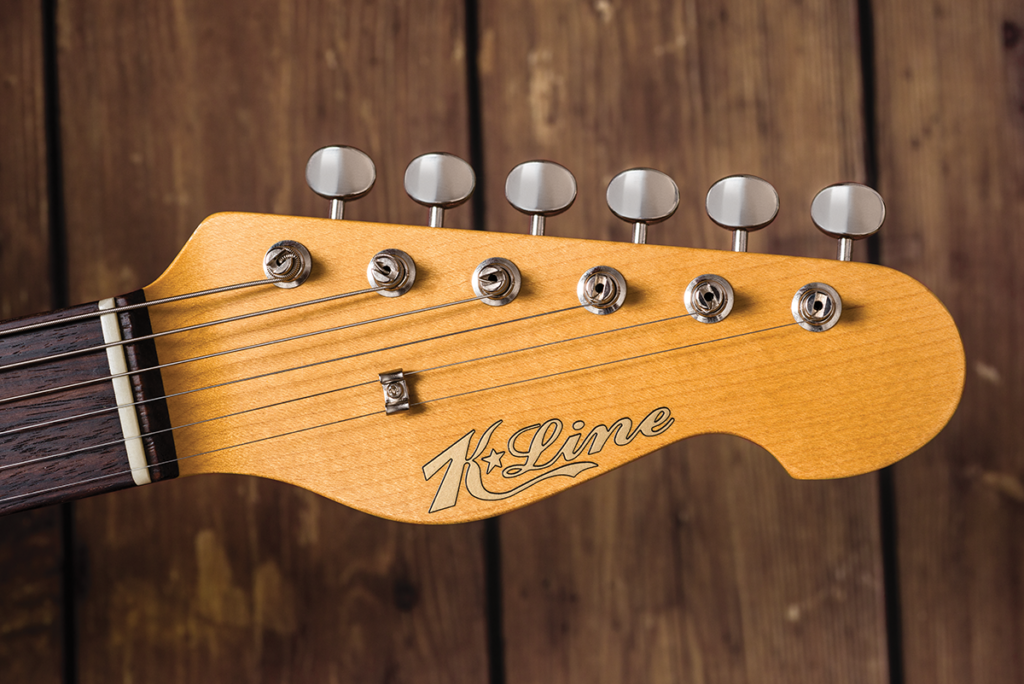 Vintage-style tuners and an understated headstock design add to the vintage vibe
The Klein bridge pickup sounds very good indeed and we probably wouldn’t have enjoyed spending time with the Del Mar any less had it arrived with only one Gold Foil installed. That said, there are a lot of inspiring sounds here: adding more Strat flavours to the recipe, the ‘in-between’ positions two and four provide plenty of quack and all the while, that Wilkinson vibrato keeps proceedings stable and in-tune.

The tone control holds a couple of surprises; pulling up the tone pot (not always easy in the heat of battle with a Strat-style knob and sweaty paws) engages the neck pickup when the five-way blade selector switch is in positions one and two.

This gives you a lovely Tele-style neck-and-bridge combination in position one and ‘everything on’ in parallel for maximum quack in position two. Positions three, four and five remain unchanged, but it’s a clever way of getting a couple of interesting additional sounds out of an already versatile, yet simple, control setup. 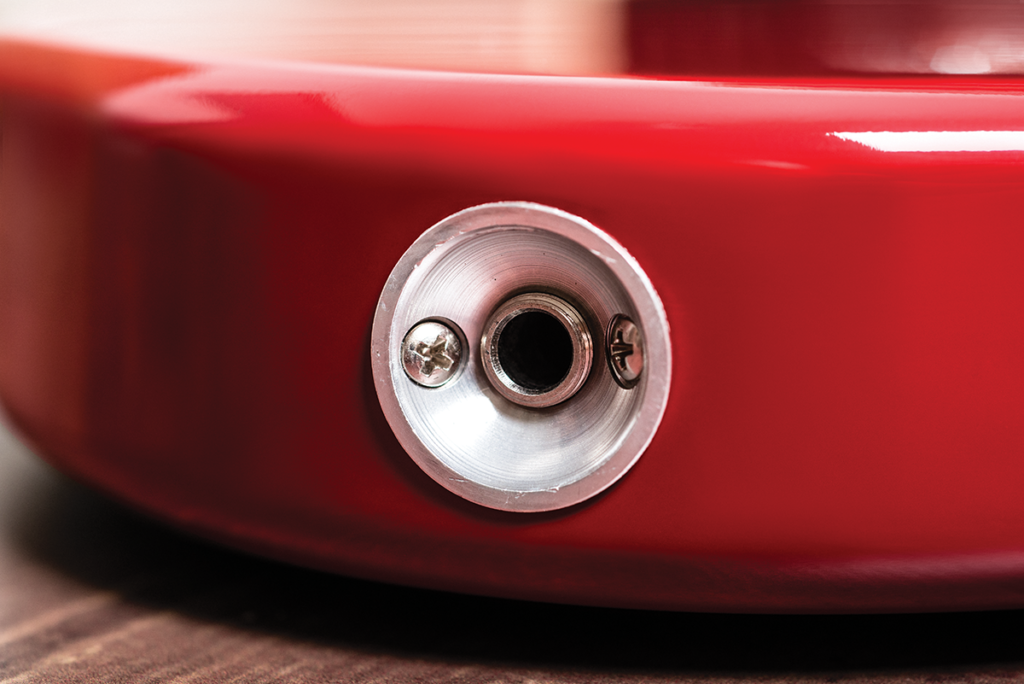 The Electrosocket jack cup is a more reliable design than vintage Tele-style sockets
To say that the Del Mar’s pricing places it in a crowded area of the market is an understatement, but it’s a serious guitar with bags of personality that we like an awful lot.
The pickup choice is inspired, but if you want a K-Line in a different configuration then you can spec an instrument with more traditional humbuckers, SSS, HSS, P-90s… on top of that, there’s a choice of neck shapes – “the sky is the limit… within reason” – premium tonewoods and various levels of finish distress, though Kroenlein says he “doesn’t do the dragged-behind-a-truck look.” We suspect that if you dig this guitar you’ll struggle to put it down, so that heavy wear might just happen naturally.

Dennis Fano’s Novo Guitars Serus T £2,449 sets the standard when it comes to modern boutique offsets, and his Sectis from £3,499 and Serus J from £2,899 models were born to surf. His previous company Fano’s Standard JM6 is also well worth a look at £1,699. Finally, if you can find a Fender Custom Shop Ancho Poblano Stratocaster £2,639, this limited-edition 2015 firecracker is worth selling an organ for. 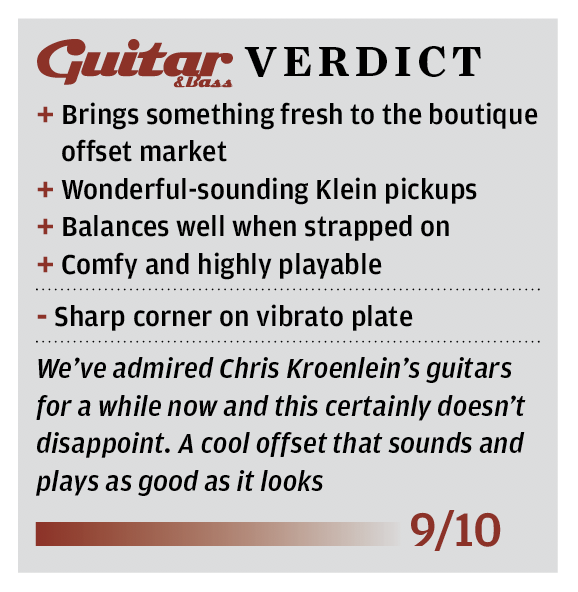