New Jersey’s Louis Rosano constructs, tests and fine-tunes every Louis Electric amp. We try out his tribute to Danny Gatton. 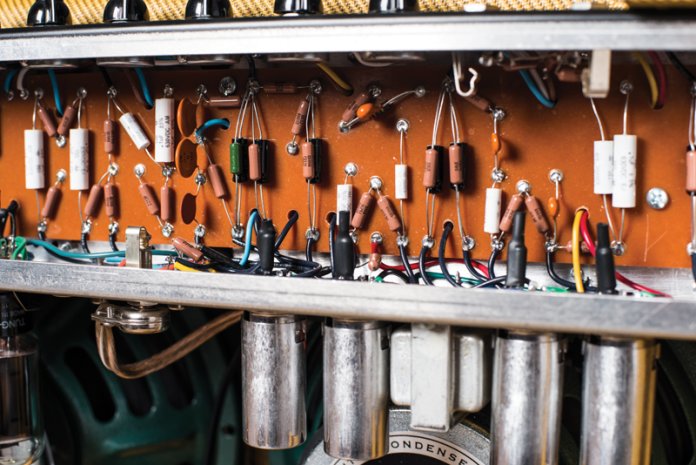 In Ralph Heibutzki’s Danny Gatton biography, he quotes Robbie Weaver, saying Gatton “had more amps than the law allowed.” Over his career, Gatton played tweed Bandmasters, Bassmans and Twins, before moving on to blackface Super Reverbs and Vibrolux Reverbs.

Louis Rosano was making his version of a 5F8-A tweed Twin and sent one to Danny Gatton. It was so good that Gatton retired his vintage Twins and used the Louis Electric Twinmaster whenever he played larger venues. Rosano has been making valve guitar amps for 20 years and his client list includes some very big-name players.

The Gattone is Louis Electric’s tribute to Gatton and it has an interesting mix of features. Like a late 40s Fender Super, the cabinet contains two 10-inch speakers and it’s V-fronted. It’s also made from plywood, and rather than using floating baffles, the speakers are mounted on thick 10-inch squares of ply that are each held tight to the front panel of the cabinet by eight screws. 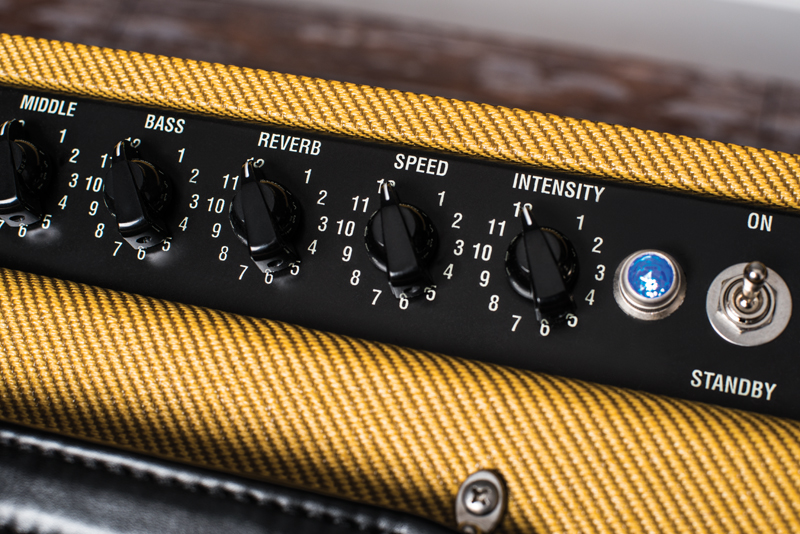 The Gattone sent to us for review differs from the specs published on the Louis website in two significant areas. Firstly, the amp has a solid-state rectifier module plugged into the socket that should be home to a 5AR4 valve. Secondly, two Jupiter LC10 ceramic speakers have replaced a pair of Celestion G10s because Louis decided they sounded better in this amp.

Running a fixed biased pair of 6L6 power valves with a trio of 12AX7s and a 12AT7, the Gattone is handwired on what appears to be a moisture-resistant phenolic eyelet board. It has Mallory and Sprague capacitors as well as custom-wound power and output transformers.

With onboard reverb and tremolo, plus two 8-ohm speakers paralleled for a 4-ohm load, the looks might evoke the 50s, but the specs seem closer to those of a stripped-down and tweaked blackface Vibrolux.

A strong visual identity can create expectations that don’t tally with the true nature of a product. The Gattone is a case in point, so let’s begin by describing what it isn’t. Despite appearances, the Gattone is no lightweight 50s replica designed for easy harmonic saturation, chewy grinding midrange, saggy soft lows or boxy cabinet resonance. 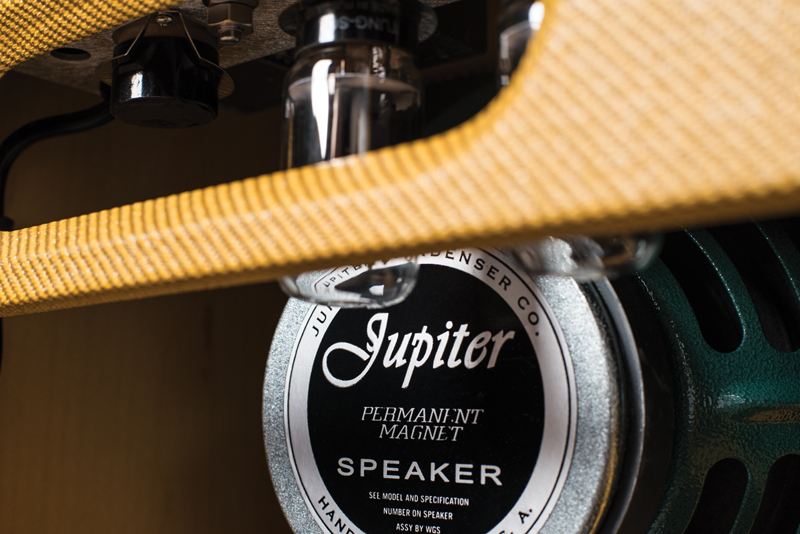 Instead, you get clean headroom, tightly controlled lows and punchy attack. It has 50s and 60s tonal attributes, and although it doesn’t reach the glassy transparency of a mid-powered blackface, that’s the general feel.

Given the tweed covering, speaker configuration and the 35-watt power rating, it seems appropriate to compare the Gattone with a ’56 Fender 5F4 Super variant that I’ve been servicing. The Fender has a lot more upper-treble chime and harmonic complexity, but the low end is softer and breaks up more quickly.

The ceramic speakers contribute to the Gattone’s smoother treble and upper-mid response, but it’s the nature of the circuit too. The midrange control dials in fatter 50s mids, so you’re not stuck with a scooped, 60s-style Fender tone, but it’s there if you want it. 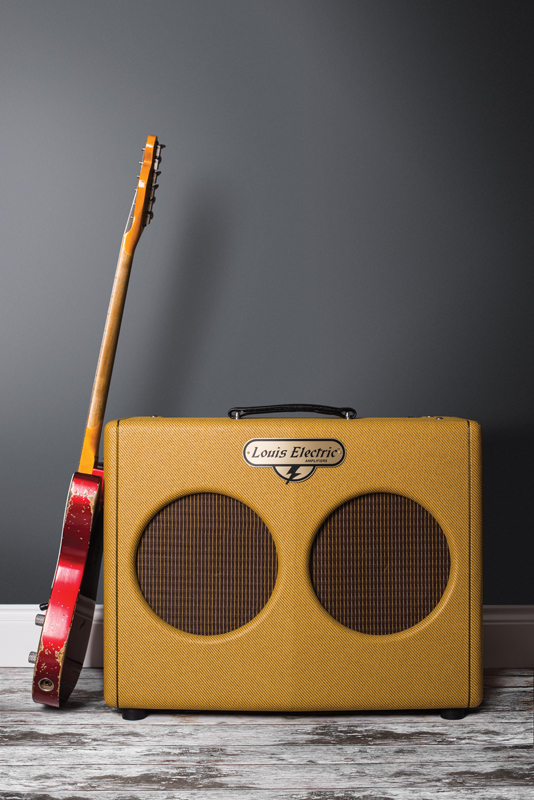 The Gattone sounds even across the frequency range, but an aggressive and slightly piercing resonance is audible when playing the high E string around the 12th fret on my test guitars.

With vintage-spec Stratocaster single coils running into the high input, the Gattone stays clean until the volume reaches 9 (out of 12). Tele bridge pickups and PAFs push the Gattone into overdrive sooner, and this amp really makes sense when you play a Telecaster through it.

Fifties-style Strats sound a little underpowered, but a Tele bridge pickup and the Gattone talk like old friends. You get twang with solidity, and bite without ice-picky treble. Most of us would struggle to play like Danny Gatton, but a decent T-type and the Gattone allow you to at least nail his tone, if not his technique.

As volume is rolled further up beyond 9, the overdrive increases, along with brightness, but the Gattone’s punchy attack is retained. Some may prefer a touch more sag or compression, especially when it can get as fierce as this. This is where a valve rectifier might help matters. The dual 10-inch speaker configuration is very directional and I soon learned to stand out of the firing line in order to prevent ear fatigue. 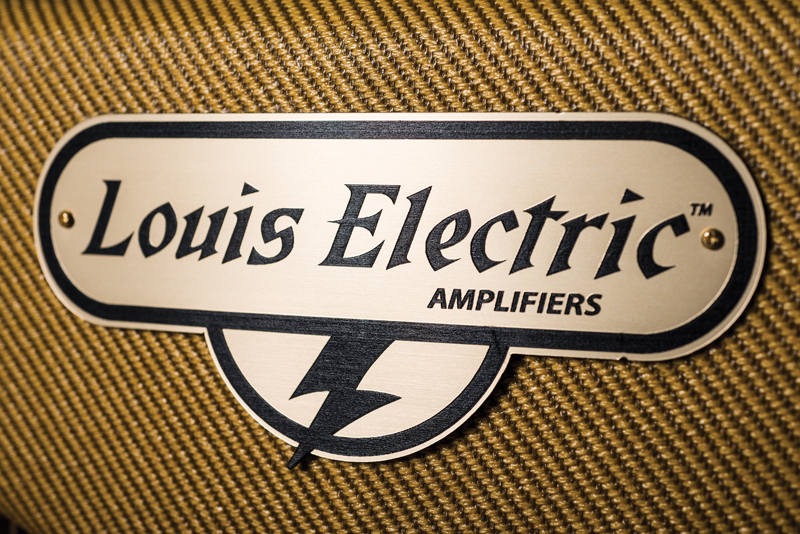 The reverb impresses with its tone and depth. The control is progressive and it can go from a hint of roominess to something so cavernous it drowns out the dry signal. The tremolo isn’t quite as stellar. A tad choppy, the speed isn’t quite slow enough at the lowest setting, and beyond around three quarters it gets so fast that it becomes a blur and loses its intensity.

The Gattone seems to work best at low-ish to medium volume, and within this sweet spot I’d describe the sound as `produced’. It’s not unlike a carefully mic’d up guitar sound that has been enhanced by quality outboard processing and refined with a classic equaliser.

As the review model arrived with a solid-state rectification module installed, I hoped that simply swapping it for a valve rectifier would soften the touch dynamics. However, Louis Electric advised against it because the power valves would need to be re-biased as a result.

While the Gattone isn’t the most dynamically thrilling amp, it’s not designed to be. If you have high-quality guitars and want an amp that allows their individual voices and your playing to shine, the Gattone fits the bill.

It has a quality signal path that adds just enough character and avoids the sterility of certain `pedal platform’ amplifiers. The Gattone wouldn’t be ideal for garagey grunginess, heavy blues or even classic rock, but it’s very well suited to cleaner blues styles, jazz, fingerstyle and country picking. 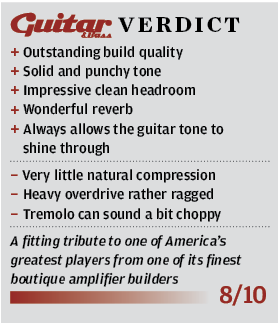