Pining for the ’80s? Reintroduced in 2013, the Music Man Sabre brings back double humbuckers and even the string mute. Review by Gareth Morgan 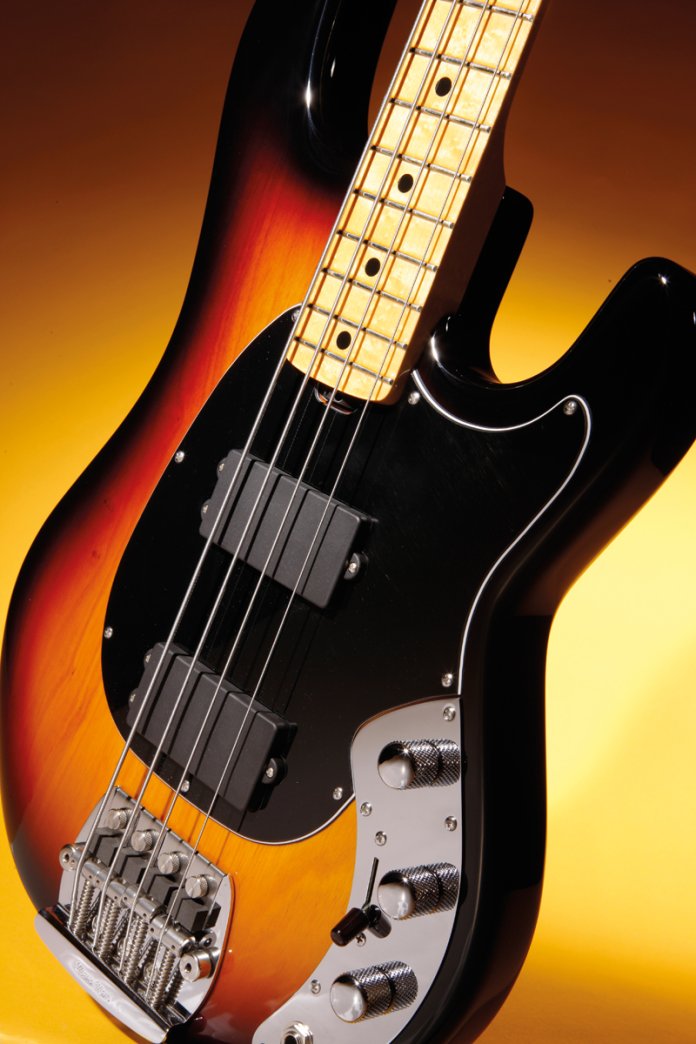 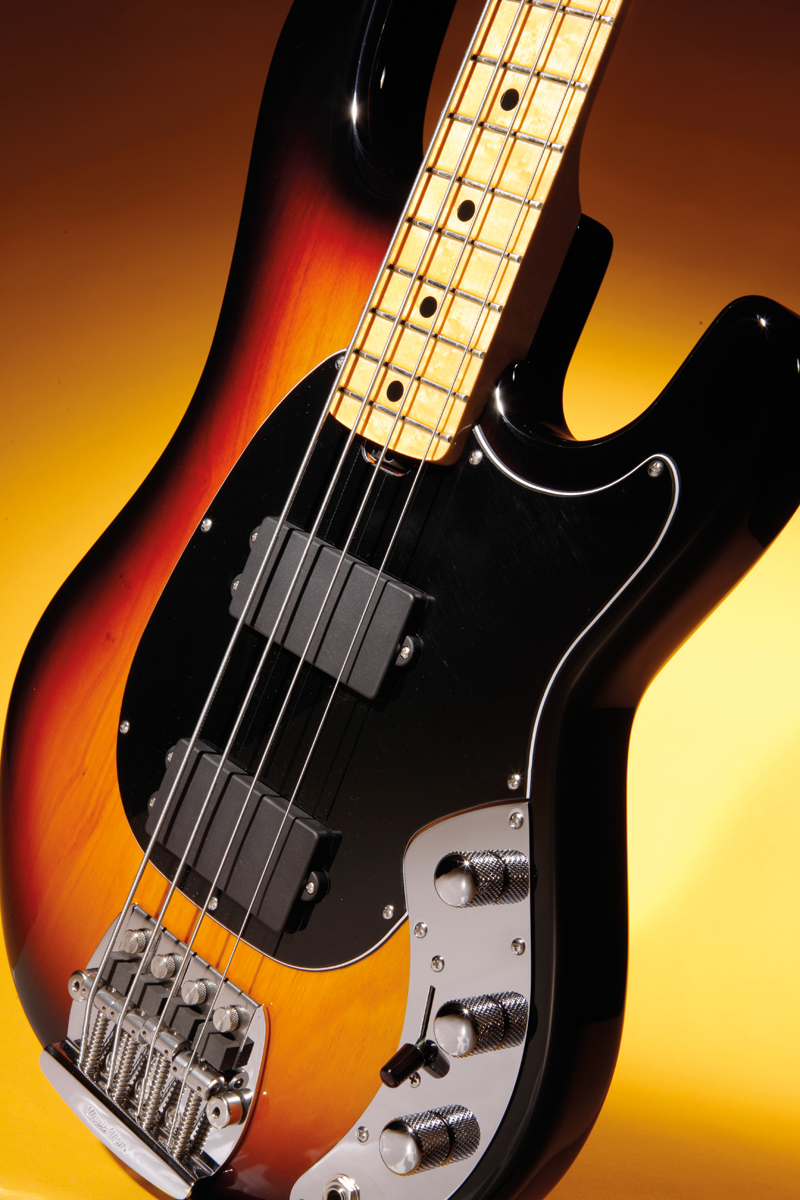 When bassists think of Music Man, it’s always the original StingRay model that immediately springs to mind: one large humbucker, a beautifully playable neck, an active two-band EQ and string mutes, plus an aggressive rasp with crystalline highs that made it one of the classic basses.

But there’s another ’70s Music Man bass – the Sabre, which appeared in December 1978, roughly a year after Leo Fender cut his ties with the company. It was essentially a two-pickup version of the Stingray, with an added neck humbucker designed to net players who found the StingRay’s sound a little limited. It never really caught on and was discontinued in 1991, but history has regarded the Sabre with favour, and originals have accrued value and are now sought after by collectors and MM enthusiasts. 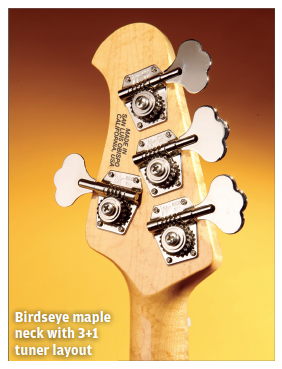 This reissue, named the Classic Sabre, has a body that’s subtly different to that of a StingRay, about 2.5mm wider, with the faintest touch of the ‘offset’ look and a less pinched, more guitar-like waist. It has forearm and substantial ribcage chamfers – the original Stingray had neither, though of course modern ones do. The Sabre feels comfortable to hold, and while it wants to dive floorwards in the seated position, it sits comfortably on your lap with the help of a restraining forearm.

Our review model’s ‘vintage burst’ finish gives the Sabre proper old-school Music Man credentials and the three-ply black/white/black pickguard (tortie is an option) doesn’t refer to its forebear’s teardrop shape, being almost Jazz Bass-like in design and tracking the lower edge contour into the horn.

The Sabre comes with a birdseye maple neck with some simply beautiful speckled figuring. It’s a medium ‘C’ contour, not ultra-slim and fast, but the added substance makes it feel comfortable and reassuring, and the lacquered finish doesn’t spoil your left-hand fluidity. 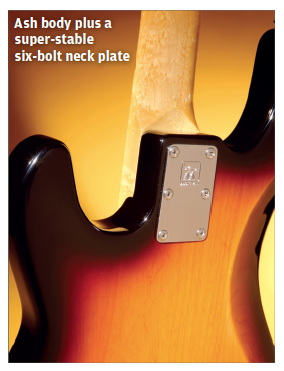 The headstock has that instantly familiar shape plus a white, sophisticated-looking melamine nut. The four chrome Schaller BM tuners have open gearing and tapered string posts and are laid out in that well-known three-up, one-down style – something which can catch you out if you like to swap basses, but it’s one of those Music Man things… and it makes it half an inch shorter than a Precision.

You can choose to have a rosewood fingerboard but, for many of us, a proper Music Man really has to have a maple fingerboard with chunky black dot markers, and that’s what you get here. The board is beautifully finished with a lustrous sheen and it carries 21 chunky, high-profile nickel frets.

The Top Loading bridge is a made from hardened chrome-plated steel and has barrel-shaped stainless steel saddles. It’s also got four foam string mutes, a traditional MM bridge detail, which can be raised and lowered via knurled thumbscrews. The original idea was to attempt to reproduce a double bass-like quality by adjusting the amount of sustain, and it’s another tonal weapon in the Sabre’s armoury.

The active electronics are hooked up to one Music Man Standard Neck Pickup, which is a 16-pole humbucker with Alnico magnets, and one Standard Bridge Pickup, similarly packing Alnico magnets but having only eight polepieces.

Aside from the two EQ controls, Bass and Treble, the Sabre has a Volume dial and a five-position selector switch: position 1 gives the bridge pickup, centre position 3 gives both and position 5 solos the neck, while position 4 brings in a single (rear) coil version of the neck pickup, and position 2 adds both bridge coils to this. There’s also one other feature buried deep in the Sabre’s electronics bunker, namely MM’s patented Silent Circuit, a dummy coil with a buffer preamp to minimise 60-cycle noise hum in single coil mode. 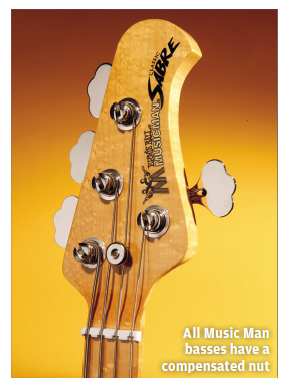 Sounds
Kicking off with selector in the central position 3, giving both pickups on, we found the best way to approach the Sabre was by cranking the onboard Bass knob – much less than that doesn’t really producing enough width for basic practicality – and adding about half Treble boost (the exact degree of boost is difficult to calculate as there’s no centre indent and no dial-numbering). Do this and you get a decent E string growl, with a zinginess that becomes more evident as you move across the fretboard, but the response as you move from string to string is still nice and even.

The G string has a brittle edge and hints at the StingRay fizz, but it’s still plenty wide enough for general usage. Boosting Treble eventually gets thin and wiry, with a sense of compression when popped aggressively. 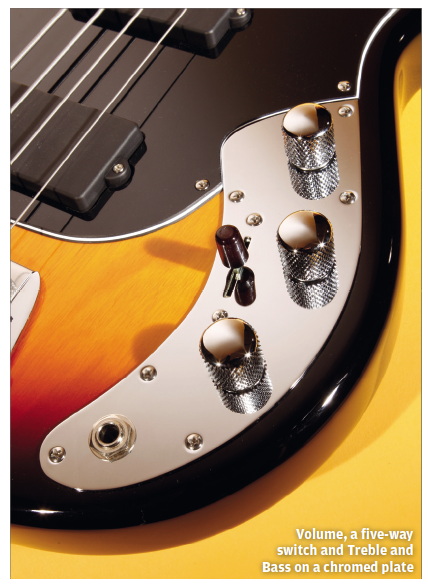 Move to position 5, and the soloed neck pickup suggests a P-Bass through its woody acousticisms in the lower registers, although the Sabre doesn’t have as much of a hollow feel in the midrange. The E string has a snarling edge and it’s all brooding and dark-hued on the A and D strings, with highs that inform clarity but lack excessive cut and bite. Boosting Treble increases fret noise a little, adding a crunchy edge to the softer core, and this would definitely make for a decent rock sound, especially for grungier applications.

Switching to the Bridge pickup uncovers a tight, funky tone, not excessively burpy but still reminiscent of Bernard Edwards’ StingRay-powered Chic grooves such as Everybody Dance. There’s a clipped quality to the sound with a tight bass end, gunning mids which hint at gurgly but don’t quite make it, and highs that give definition without excessive aggression.

These highs get a bit more nasal if you increase Treble; to our ears, while snappy on full boost, they lack the body and impact of a similar setting on many other active basses.

Of the remaining two settings, position 2 is bridge pickup plus the neck pickup’s rear coil, which basically gives you a tone similar to the twin-pickup sound but with less warmth and width and a bit more of an edge to the lows.

Boosting treble removes more stature and impact, its best application being via the thumb, and this dry, raspy slap tone is perfect for busting some Louis Johnson licks. Position 4 (rear coil, neck pickup only) offers a fractionally gnarlier version of the P-Bass-influenced neck sound, just that little bit lighter in the bottom end and a tad brighter across the neck.

In truth, the differences are pretty minimal but still represent a reasonable option. 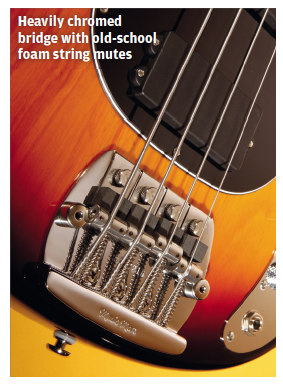 Verdict
The Sabre isn’t just a variation on the much-loved StingRay – it’s a really good bass in its own right. Some might raise a quizzical eyebrow at the two-band EQ, but together with the options offered via the five-way switch the Sabre is armed to deal with a wide range of stylistic battles, from earthy blues to bubbling fusion.

The footprint of the ’70s is deep and obvious in the Sabre’s gorgeous lines, playable neck, familiar headstock, and even the sunburst. The price puts it in direct competition some basses of notably higher specs and equal quality… but, hey, none of those say ‘Music Man’ on the headstock. 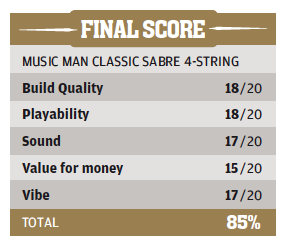