Guitars come and go, but once a player finds the right pick it’s surprising how loyal they can become. Herco Nylon Picks were used by many star players, and now these classics are back, thanks to Dunlop.

Herco picks were there right at the beginning of the rock ’n’ roll story. The Hershman Musical Instrument company of New York was set up in 1940. The first picks that Jerry and Eddy managed to get off the production line were made from a non-celluloid plastic; there were three or four shapes and the gauge was extremely heavy. Quality control was loose to say the least; however, all looked slightly different due to the admixture of brown and white pigment. Today’s pick collectors often refer to them as ‘Bastard Browns’.

During the mid-1950s, at the same time that Leo Fender was launching the Stratocaster, Hershman started to get more serious about peripherals, and a dedicated accessories division was set up. The company itself was doing well; its new Goya range was one of the first to target the growing market for instruments and amps at the mid-price and budget areas of the market. The first new picks of the era were known as the 720 Counter Top Assortment.

They were made from celluloid, manufactured in Japan and came in 11 basic shapes, plus thumb picks and finger picks. There were a couple of colour variations, but they were essentially made from mottled celluloid in a range of ‘tortoiseshell’ colourations. A number of the picks featured an unusual glued-on cork grip.

The range was hugely successful and remained available to players until the 80s. It’s worth noting that Herco was essentially the highest-profile distributor for these picks and the same items, dispensed from boxes branded to Ibanez, Lindell, Ventura and Segovia, were available at the same time. 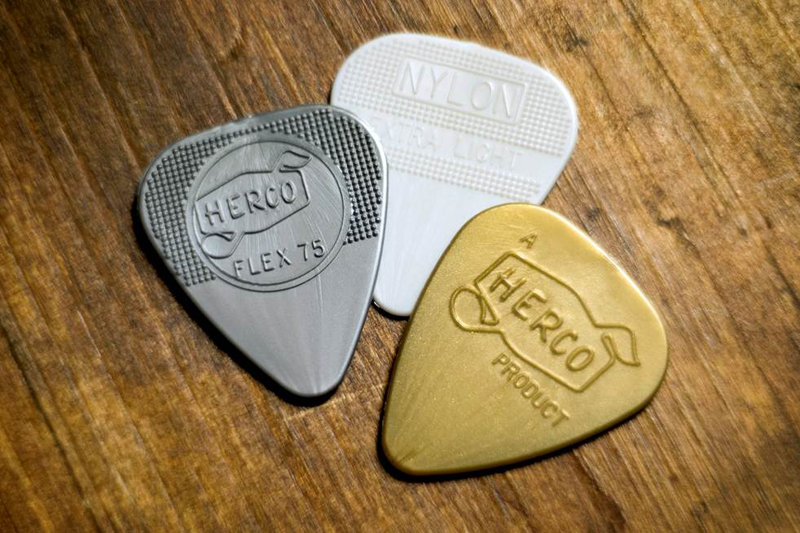 As guitar music became more and more popular in the 1960s, there was a growing demand for budget picks and Herco turned to nylon (the company called it Flexylon). Three new lines were launched in 1966, and this was when sales really started to take off.

First, there was an ultra-budget range of green picks. They were aimed at the teenage player with only pocket money to spend, and they came in six shapes. The injection moulding process wasn’t perfect and photos of the era indicate the presence of excess material around the edges and marks where they were separated from the mould stem.

At the same time, a premium range of nylon picks (at roughly twice the price) was launched. There was the thin-gauge gold HE210, which became know as the Bold Gold, and the heavier-gauge HE211, the so-called Hi-Yo Silver – despite the fact they were also made in white. These two picks are the ones  that became associated with players such as Jimmy Page, Joe Walsh, Scott Gorham, Brian Robertson, Pete Townshend, David Gilmour, Don Felder, Tommy Bolin, Rory Gallagher, Gary Moore and Chris Squire.

These picks remained in production, unchanged, until the Herco pick brand was sold to Dunlop in 1992, at which point modified gold and silver Herco-branded picks, the Flex 50 and Flex 75, went into production (not to be confused with the earlier Herco Flex series picks of the late-1970s).

Despite the success of the Bold Golds and the Hi-Yo Silvers, Herco’s quest for pick excellence continued. In the mid-70s, the company launched its blue (‘Bugablue’) standard shape HE209 and HE212, which was a triangular pick but with rounded edges. 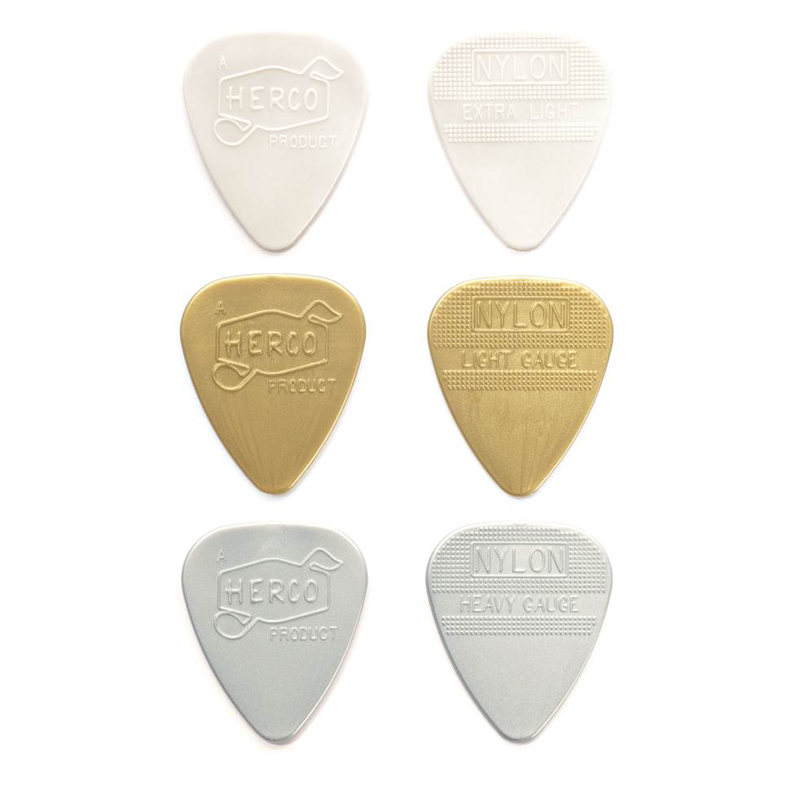 These were ultra-thin nylon picks, designed to give a particularly percussive edge to the guitar’s sound, and were therefore particularly good for certain types of acoustic rhythm. Another line of budget pics, the ‘Dynamite Whites’, was also launched mid-way through the 70s. They were available in three basic shapes – standard, large triangle and small triangle (both with rounded edges), and in thin, medium and hard gauges.

Towards the end of the decade, the Flex series reached the stores. There were four shapes. The first three, a pointed teardrop (Flex 40), a triangle (Flex 48) with straight sides and a triangle with rounded edges (Flex 60) were made from light brown nylon. Curiously, the Flex 55, the most standard-shaped pick in the group, was manufactured in bright orange.

Herco’s final stab at innovation came in 1980, with the release of a line of picks referred to as the ‘Axe Handlers’. The company’s publicity of the day highlights the unique material developed for the production of what were essentially US handmade picks. They were designed and produced by Robert Zaidman, and over the six-month run there were around 20 basic shapes of pick.

The material was custom-engineered for tone and durability. Each pick was hand-finished and coated with a special compound. Axe Handlers came in red, green, yellow and brown. Some believe that the brown Axe Handlers were actually surplus 1940s stock that was re-released when the company’s marketing was much improved. This may, of course, simply be an urban legend.