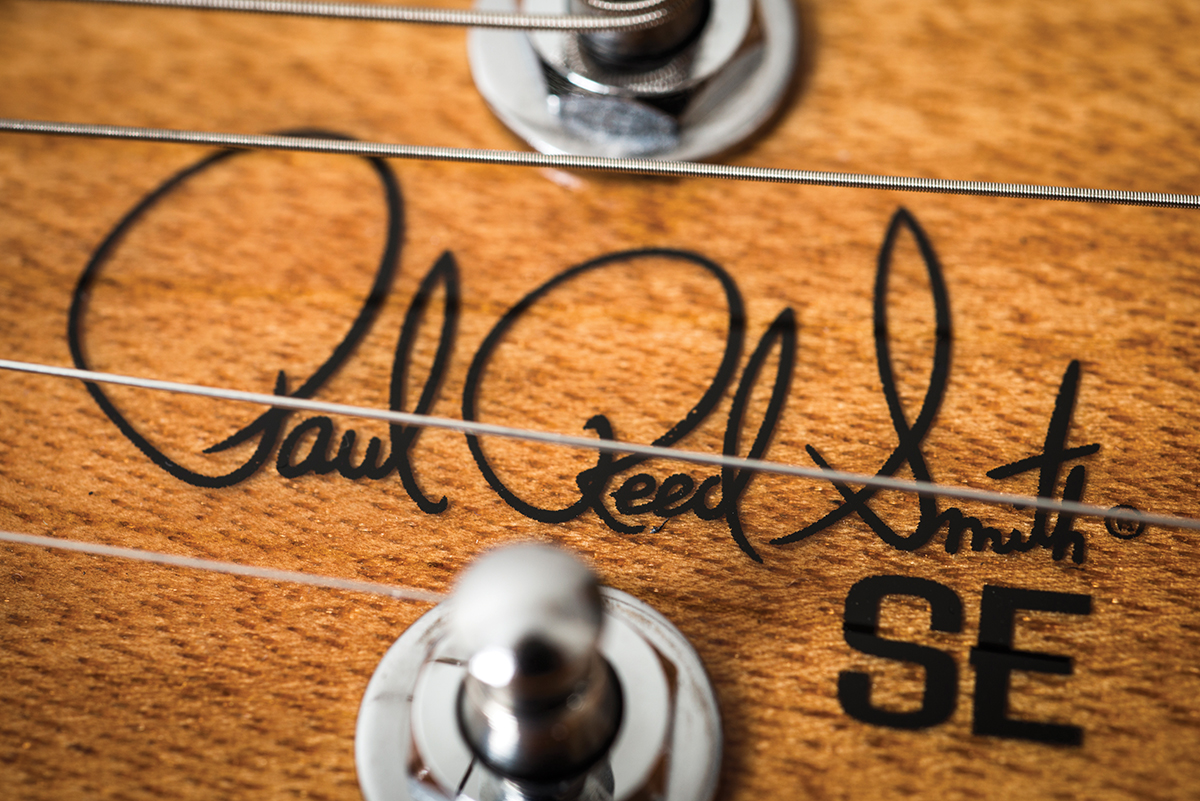 When US guitar maker Paul Reed Smith launched his Korean-made SE Series guitars back in 2001, it wasn’t exactly a groundbreaking move. Practically every guitar brand, with the notable exception of Rickenbacker, has licensed Asian factories to produce affordable doppelgängers of the big-bucks stuff. 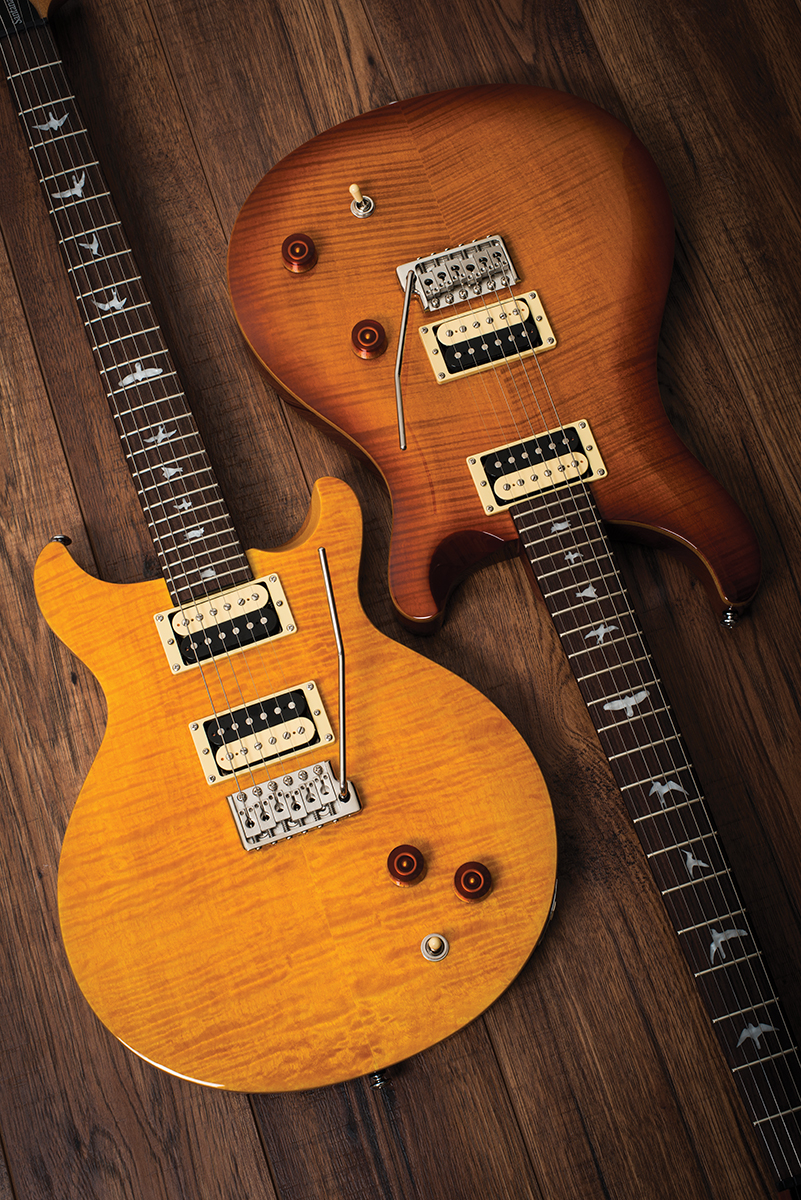 What the SE range did for PRS, however, was shake the perception of its designs as high-end honeypots out of the reach of anyone but bankers, the savvy retired and born-again guitarists who’ve finally managed to kick the kids out of the nest. 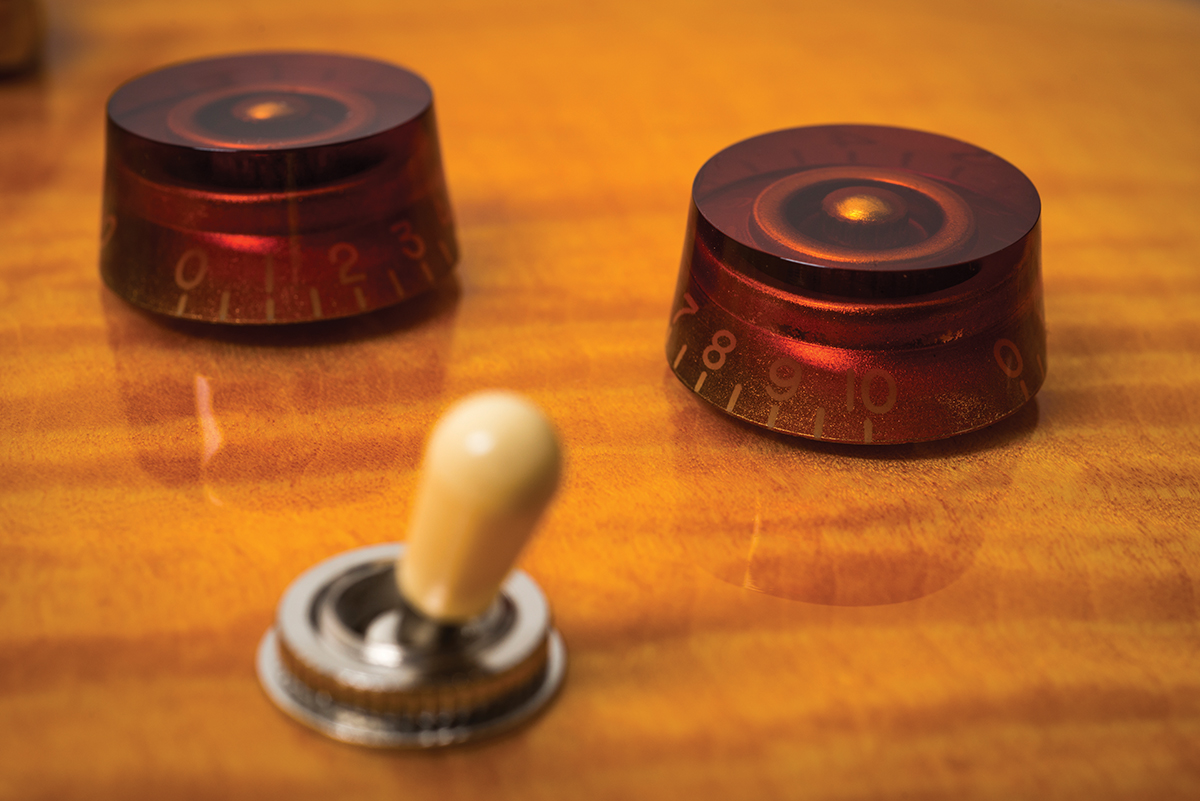 The two models featured here, the Santana and Custom 22, are foot soldiers in the latest generation of the SE range. The former is the more-affordable descendent of Carlos Santana’s signature model, the almost symmetrical double-cutaway guitar that put PRS on the map in the first place. The latter is arguably the design that we most associate with the brand, with a little splash of Fender DNA in the extended top body horn.

Before we pull these guitars apart to reveal their differences, there are a few areas where the beams cross on the spec sheets. Both feature a mahogany chassis with ribcage contouring, paired with a maple top with the edges exposed to create the illusion of binding.

This textbook timber partnership is crowned with flame maple veneer to add some eye candy to the translucent finishes. We’ll come to the neck material in a moment, but other shared features include rosewood fingerboards, each with a flock of iconic bird inlays, and a well-cut top nut. In the hardware dept, you’ll find chunky PRS vibrato units, built like a vintage Fender vibrato on steroids, and good-quality sealed tuners. Each guitar comes with a padded PRS gig bag.

Now for the differences. The Custom 22 has a Wide Thin profile set-maple neck; the Santana’s set-mahogany version comes with the Wide Fat shape with a slightly longer neck heel. The Custom 22’s fingerboard radius is 10 inches. The Santana packs a flatter
11.5-inch ’board.

Looking at these guitars side by side, you’d be forgiven for assuming that they’re both working with the same scale length. Nope. While the SE Custom 22 is spec’d with a 25-inch scale, the Santana has a shorter 24.5-inch length. What difference does that half inch make to the playing experience on offer here? Stay tuned to find out.

You also get 24 fat frets on the Santana, and the ‘22’ in the Custom’s model name is a big tip-off that you’re bagging two fewer frets with this guitar. The suitably named Custom 24 model is, though, available to those looking for a full two-octave ’board.

PRS SE Santana & SE Custom 22 in use
Reaching for Carlos’s baby first, it immediately feels light and well-balanced. While the neck profile is described as Wide Fat, it feels less beefy than the name would suggest, more ’64 SG than ’58 Les Paul.

Of course, the thickness increases a bit as you make your way up to the 12th fret, but it’s still not as chubby as we were expecting. The Wide Thin maple neck on the Custom 22 takes up noticeably less real estate in the palm than the Santana’s section of mahogany. It has been built for speed and has an almost 80s hot rod vibe.

The biggest news on the 2017 Custom 22 is the addition of Paul Reed Smith’s 85/15 humbucker set. Based on his 1985 Standard Treble and Bass pickups, these units are wired through a master volume, master tone and a three-way switch.

It might be the maple neck talking, as well as the slightly longer scale length, but the Custom 22 is a ‘snappier’ and brighter-sounding guitar than the Santana. Run clean, the bridge 85/15 ’bucker has plenty of sparkle, yet doesn’t sound brash or shrill when you give the strings a good seeing to. That clarity pays off big time when you introduce some gain. 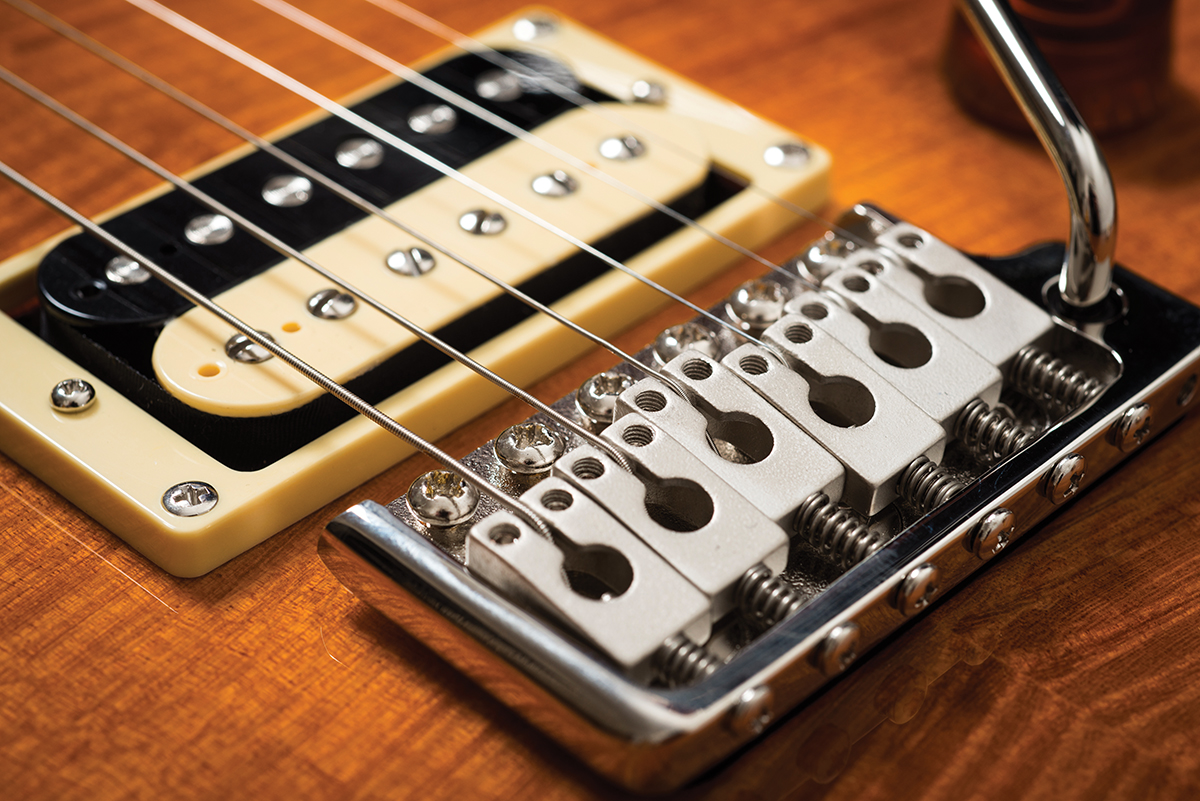 Both guitars sport reassuringly solid PRS vibrato units
Depending on the amount of dirt involved, you run the gamut of satisfying humbucker tones – from 70s blues-rock to heavier metal stuff. Flicking to the middle and neck positions fattens up the tone as expected, and both clicks on the switch react well to warm overdrive. The clarity persists on the Custom 22’s neck pickup with great note separation, but it’s in this position that the SE Santana’s ’bucker comes into its own.

If you’re a fan of Carlos’s brand of sustained blues-rock lead, you’ll be one happy bunny here. The shorter scale and the neck material promote a darker, throaty tone. Kick in a Germanium fuzz box and the Santana starts to spit out random harmonics. Again, the Santana’s bridge pickup doesn’t sound as exuberant as the Custom 22’s, but we reckon blues riffers and old-school rock aficionados will prefer its warmer voice.

We are surprised that neither guitar has a coil-split function. Some new SE models, such as the 85/15-fuelled Floyd Custom 24, have a push/pull splitter, so it seems like a missed opportunity here to reveal some single-coil tones. As you might expect, the shorter scale length makes string bending a tad easier on the Santana guitar, and you really feel that when noodling above the 12th fret. 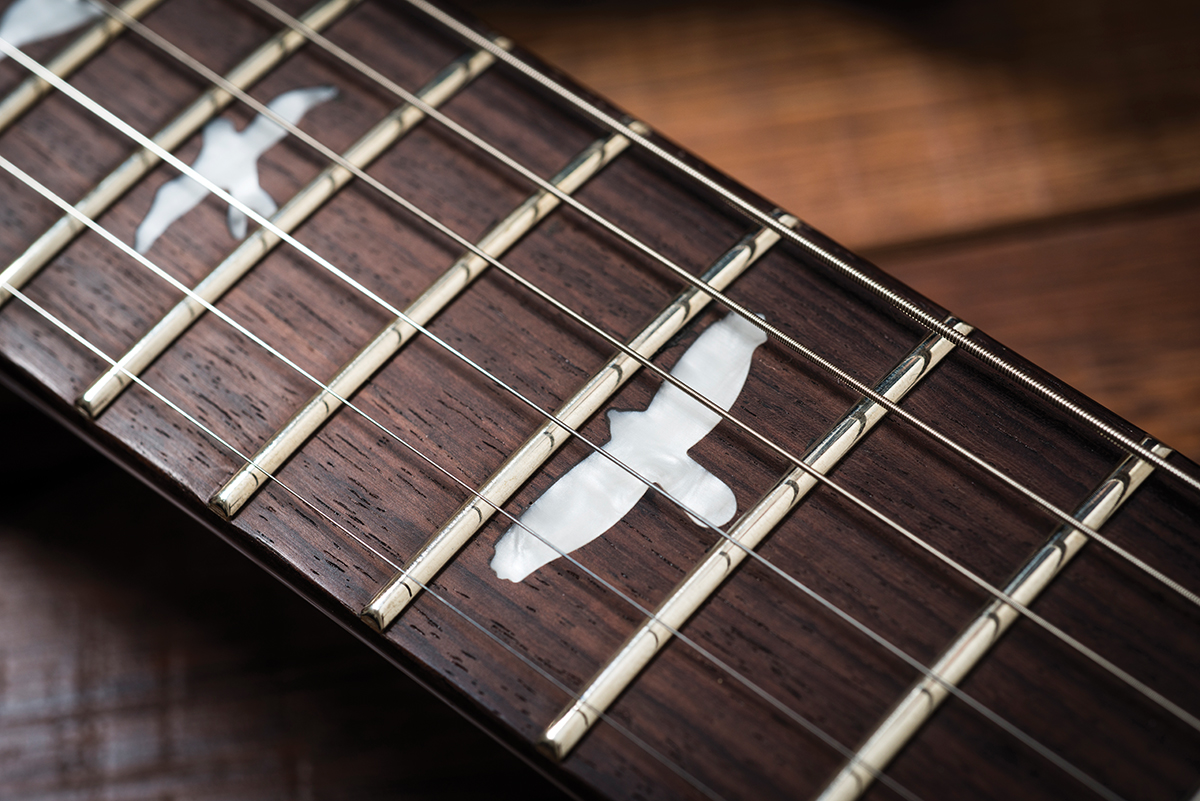 Iconic bird inlays adorn both the Santana and SE Custom’s rosewood fingerboards
That said, we prefer the extra bottom-string tension on the slightly longer Custom 22. The Santana sounds a little ‘flappy’ and less distinct than the 22. If it was our guitar, we’d beef up the string gauge to .011s. You’ll still enjoy comfortable string bending, but you’ll get more authority in your bottom-string riffs.

Not everyone gets the appeal of PRS guitars, but that’s not for the want of effort on the part of Mr Reed Smith and his cohorts. These latest models have been tweaked to a point where it’s hard to see how they could possibly be improved. Playability, tone, hardware, pickups, it’s all good news. Okay, the price tags are still pretty hefty, but you’re getting pretty damn close to the performance of Smith’s US gear without having to earn like your bank manager… or beg them for a loan. 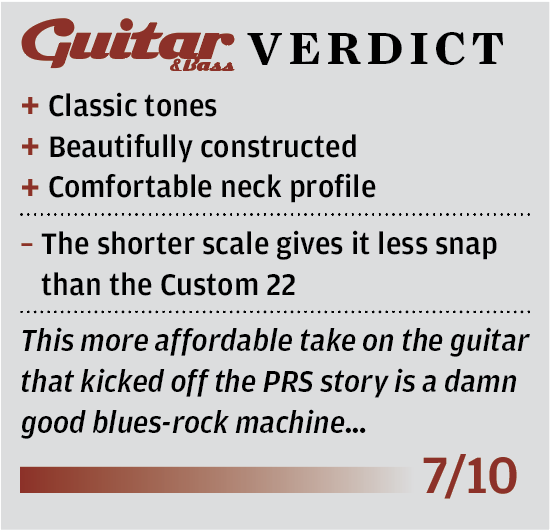 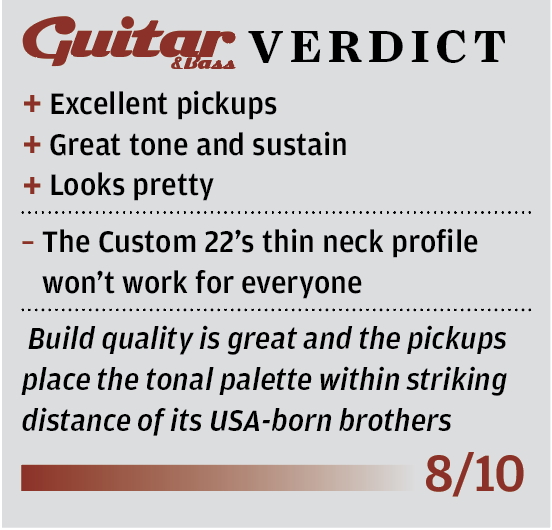