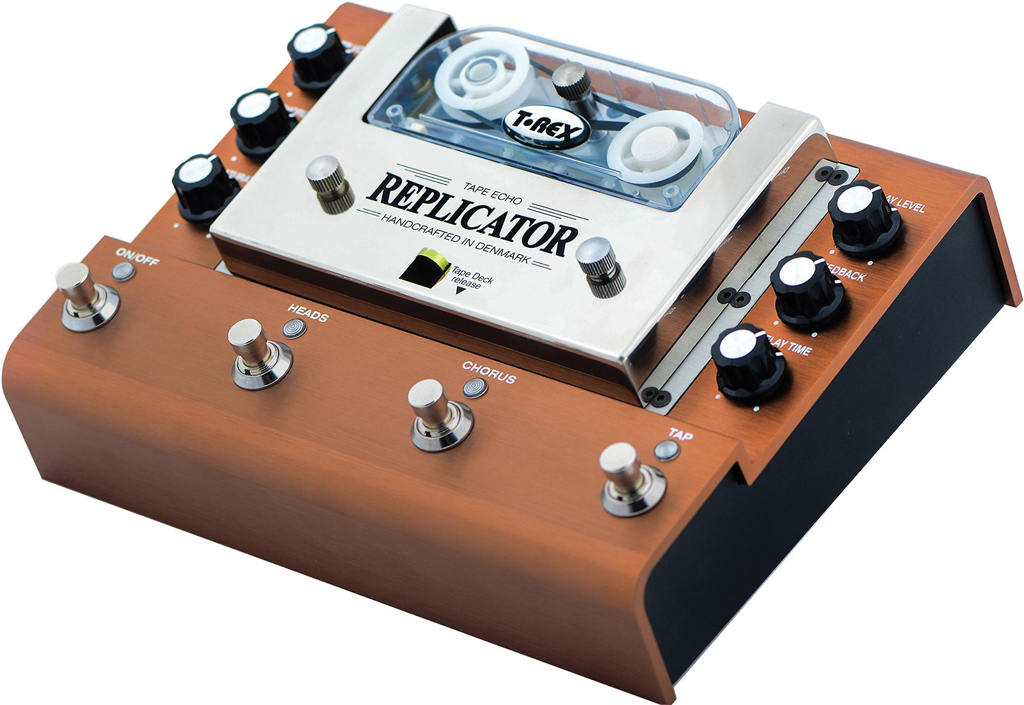 Now that summer is on the way and January’s 2016 NAMM Show is a distant memory,  we want you to cast your mind back further, to NAMM 2015. Of all the product launches, there was one in particular that provoked GAS panic in every delay-addicted guitarist: a 100 per cent analogue, real tape echo/delay machine that not only emulates the sounds of those bulky and at times frustratingly temperamental machines of yesteryear (or even the rebooted units from Fulltone), but uses old-school tape and delivers the modern-day convenience we now expect.

The T-Rex Effects Replicator was no rush-release. Instead, the team decamped from the Californian sunshine back to the cooler climes of Denmark bathing in a halo of positive noise from guitarists, the guitar press, social media and online forums.

What the company came back with is a tape echo unit that is, sort of, pedalboard-friendly, delivering a real, old-school tape delay sound with a feature set dragged into the present day. This includes tap tempo, chorus and two expression pedal inputs (more on these later).

It’s not often that we comment on packaging, but T-Rex has certainly thought of every detail in delivering this premium product. Opening the large brown box emblazoned with the T-Rex logo, you are faced with a brown vinyl carry case with white beading that’s reminiscent of an old 70s vinyl school satchel. You get a spare tape cartridge, a tape head cleaning kit, a 24-volt power adaptor and a sealed envelope with a message inside from the T-Rex team, along with a quick start guide.

The Replicator measures a little less than 10 inches long and seven inches wide, and when you lift the unit out of the box be prepared for a weighty 2kg load. That said, a large pedalboard with plenty of real estate will be adequate to house it, as G&B has discovered after spending a good month using the Replicator for studio work and live band sessions.

The Danes strive for `hygge’ (pronounced hue-gah), which is about making the ordinary special and meaningful. So have they succeeded in making the Replicator a hygge item for guitarists the world over?

There are plenty of features for us to get our proverbial teeth into, so let’s start with the basics. Using the supplied 24-volt DC power supply to fire up the Replicator, we plugged our Fender Stratocaster – and later a Les Paul – into the mono-only input. Our amp of choice was a trusty Fender ’68 Custom Princeton using the mono-only output. With those choices out of the way, we were up and running – there are no complicated start-up procedures and there’s no waiting for software to boot up: we’re in the analogue world here.

With the master on/off button in the off position, the Replicator is totally silent because the tape doesn’t move over the recording heads. When you kick it on, the unit comes alive. The unique and, we have to say, brilliantly designed tape cartridge begins its job of sending the tape across the recording heads, and the delay sound we achieve immediately with the controls set quite subtly is a gloriously rich, deep and creamy echo delay tone.

Selecting the various recording heads can be done quickly via a dedicated footswitch, which has a handy LED indicator (green for the first tape head, red for the second and orange for both), giving us complete control over the playback heads.

Using tape head one gives us the longest delay times (250-1,200ms), and the second tape head the shortest (125-600ms), but using both is where the magic happens. In this mode, the first head feeds back via the second head’s feedback path, so what we get is a rhythmic delay pattern The Edge would be proud of.

The onboard motor driving the tape cartridge (think back to those days of recording the Top 40 on your cassette deck) produces a little noise,  but none of that is translated to the amp. This is 100 per cent analogue audio technology, with the only digital processing coming from the tap tempo footswitch sending signals to the motor to drive the tape speed.

The Replicator provides control over the typical parameters: the volume level of the repeats, feedback, controls for how fast or slow the repeats are
and a master volume to control the overall output.

We make no apology for the joyful giddiness that comes in the next part of the review. Switching on the chorus, yes chorus, we enter a new level of lush shimmery delay tones. There is a dedicated chorus control, with which you can add a little or a lot of depth to the overall sound.

The chorus effect modulates the pitch of the delay signal,  and the pitch sways woozily as if you are gently using a whammy bar. Users of vintage tape echo/delay units will recognise this effect as it sounds like a worn tape or, at extreme settings, their unit having mechanical issues! The boffins at T-Rex have worked hard to appease vintage tape aficionados and modern delay pedal users alike.

The Replicator also has the ability to control the recording level (badged up as `saturation’ on the pedal). Turning the control level up will saturate the signal, with an LED on the unit telling us this is happening. Setting the level slightly lower ensures a clean signal with minimal noise, but what we enjoy the most is saturating the signal and playing with overdriven and fuzzy tones.

And, finally, we get to the secret sauce of the Replicator. On the rear of the unit is a kill dry button, which mutes the direct signal, and two expression pedal inputs – one for the motor, giving us control over the delay speed, and the other for the feedback. The expression pedal controlling the feedback brings out the biggest smiles, because it gives us total control over our signal from all-out self-oscillation and back to the minimum amount of delay.

Finally, and unavoidably, we must mention the price, as it has to be taken into consideration. It’s not cheap, but there’s no denying that the Replicator is a premium product that has been made meticulously, with no corners cut during the testing and development phases – and all of that R&D costs money.

We’ve had a very enjoyable month using the Replicator in myriad settings, from bedroom practice to the recording studio and, finally, the stage. Never once did we fear that the pedal would let us down when used in anger, which is a strange concept to get your head around if you are used to using a temperamental vintage tape echo unit.

Maintenance is pretty straightforward too: replacing the cartridge takes less than 30 seconds, and cleaning the recording heads with a little alcohol on a cotton bud keeps everything running smoothly.

So, is it worth the investment? If you’re a serious tonehound for whom analogue tape delay is central to your live or recorded sound then yes. If you’re a casual delay user, think twice. Did G&B experience `hygge’ when using the Replicator? Ja! 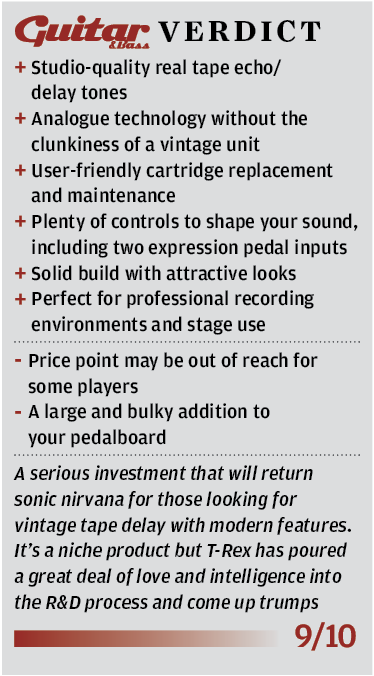