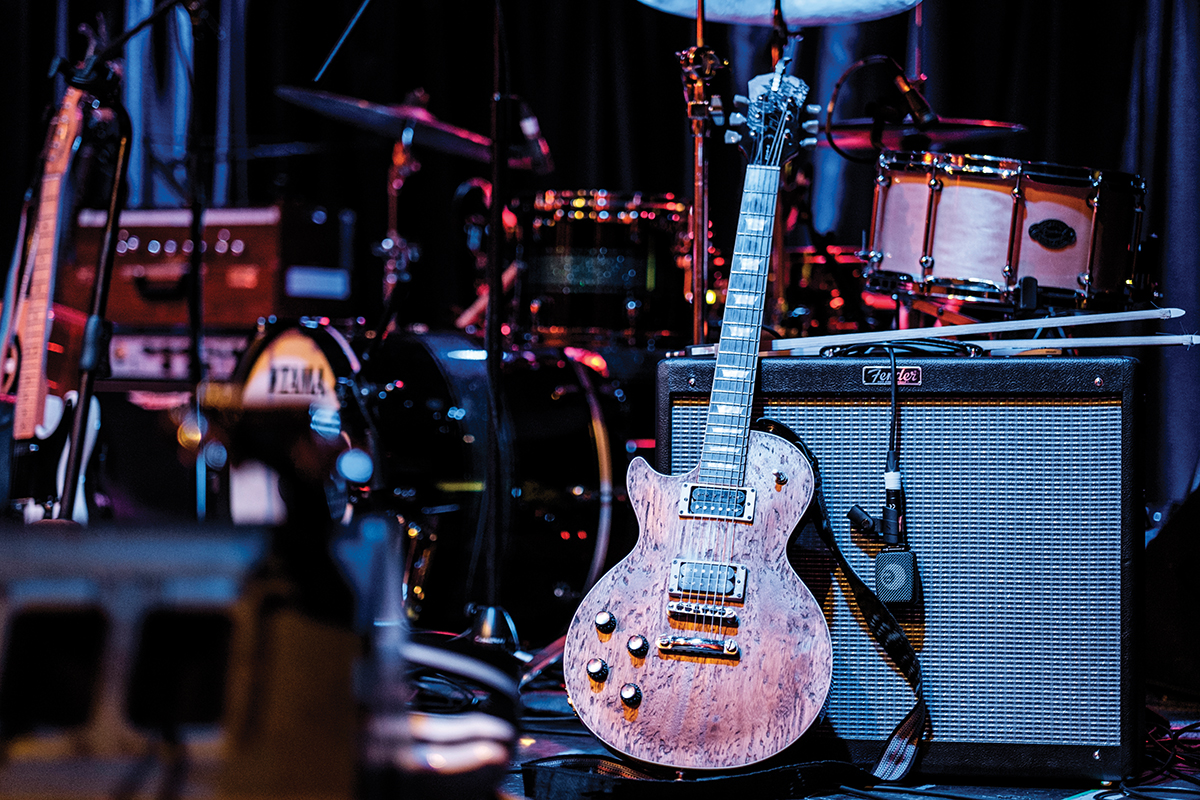 After testing out a pair of Fender amps – a Bassbreaker 18/30 and a Hot Rod DeVille ML 212 – in rehearsals for Lanterns On The Lake’s UK tour, I’d decided the DeVille was the one I wanted to take on the road, and it hasn’t disappointed.

The DeVille came on our 10-date run, nestled in the back of a rather fetching splitter van with all our other gear. As amps go, it’s the perfect size for such manoeuvres, and stowed in the back it sat still and didn’t move about. It’s also a lot lighter than it looks, and the handle Fender puts on the Hot Rod series amps is something to behold in itself – a very comfortable grip that makes lugging this DeVille around easier than most amps I’ve toured with.

As with all the Hot Rods, the DeVille ML is built solidly. The shell is covered in a thick vinyl, which is very tour-friendly, and it comes with the usual black Fender amp cover.

I did wince a little when we first put it in the van – loading a brand new amp (especially one that’s on loan from Fender) into a tour van without either a flightcase or a padded cover is usually a sure-fire way of giving it some lovely dents and scrapes.

Rehearsing in an untreated, lively practice room where everything is loud and furious – the sound bouncing and rattling off the walls and the carpet shaking – is, of course, entirely different from setting up on stage and playing through a big PA system. Often during rehearsals I’m convinced something sounds like the cat’s pyjamas, only to then find on stage that it actually sounds utterly abhorrent.

I’m not entirely sure why this is, but no doubt it’s something to do with physics… or the science of acoustics… or something else that ends in ‘ics’. Whatever it is, I have no interest in the science, I just like things to behave on stage. So I was very interested to see how the DeVille ML would perform.

Its first gig was at The Lantern, at Colston Hall in Bristol. The venue has a really nice open stage – quite large – and the room is long. We set about getting our gear set up and I let the amp warm up a bit while we got our bearings. Switching the standby off and strumming out a few chords, the DeVille sounded as wonderful as I’d remembered in rehearsals – clean, clear and loving all of my pedals as if they were its children.

Blasting through the soundcheck, it was such an easy amp to get on with on stage – the volume taper is very good indeed. As always, it was too loud on stage to begin with. I used to have an older Hot Rod Deluxe II, and I remember the constant desire to turn it down, but on that amp there was no turning down – it was either ‘as loud as hell’ or ‘off’.

I found it easy to get the DeVille ML sounding perfect volume-wise, and the taper is smooth with a nice gradual increase in volume. Speaking of volume, this amp has two separate volume controls, which are both voiced identically – the idea perhaps being that you can set two different volumes for different guitars and such like, or use one as a boost (volume 2 has a clean boost on it).

At first, I didn’t really know what to do with this; I don’t use any volume boosts on my pedalboard, it’s just clean, overdrive (louder) and then fuzz (louder still). Chris, our new genius front-of-house engineer, takes care of any out-front volume pushes, so I didn’t think this feature would be of any use to me.

During soundcheck, however, I found myself flicking between volume one and two while playing the songs, and then using that to work out the correct stage volume. Now I can’t believe all amps don’t have this feature. It may not be the way it was intended to be used, but it certainly worked for me! 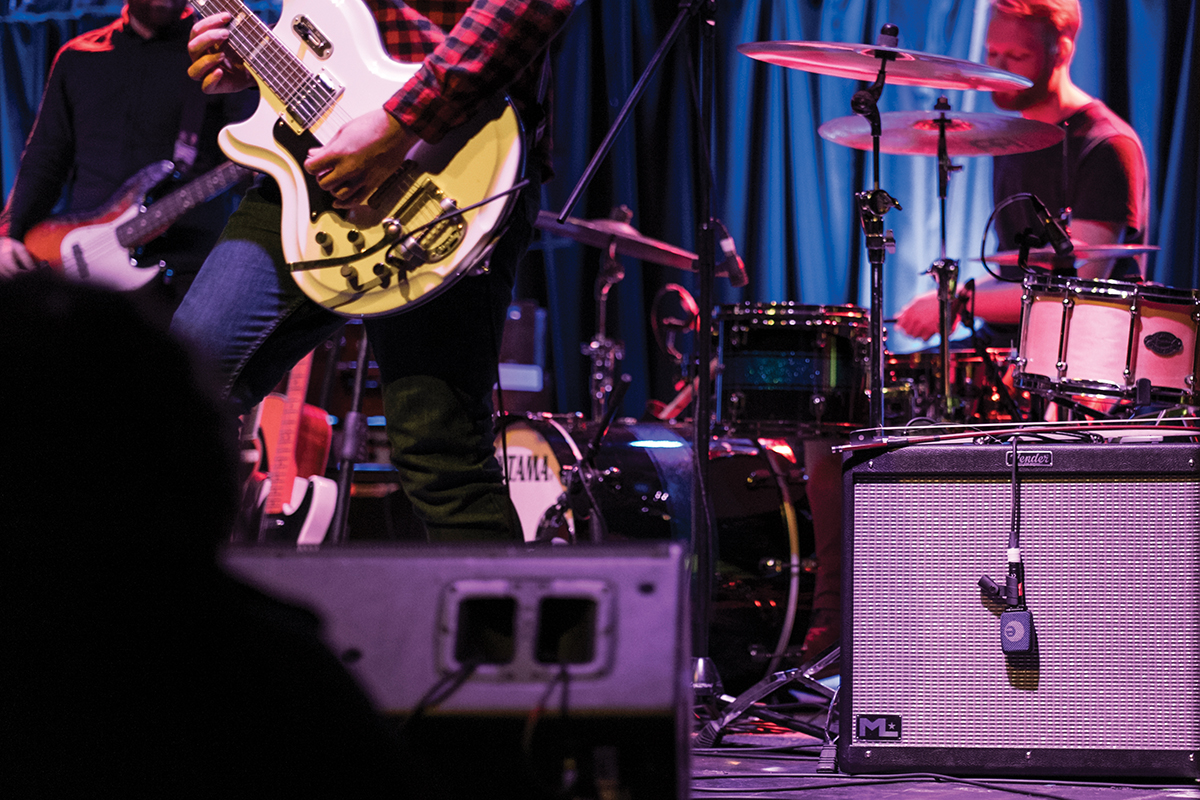 During the Bristol gig, I could really feel the DeVille ML doing its thing – it’s a serious pedal platform. I’ve never come across anything quite like it, and it just made everything sound… ‘better’.

That may seem a lazy description, but it’s true. All my pedals sounded as if they’d been given an upgrade, and the 3D depth in reverbs and delays is very noticeable – you can really ‘feel’ the sound. The EQ is great for getting things loud and removing anything too overbearing.

Chris and I found it sounded best with the treble and bass at around 12 o’clock and the mids reined in a little at around 9 o’clock; this gave Chris a good base to EQ out front if need be.

I don’t want to spend my time on stage worrying about what my guitar sounds like, I just want to play. Pleasingly, the DeVille ML allowed me to do that – there’s no harshness, no flabbing about in the low end and the projection is super-good. I could hear what I was playing clearly and it sounded great!

The second gig was the following night at Islington Assembly Hall in London. For this show, we’d recruited five extra players to accompany us on brass and strings, but the stage was massive so there was plenty of room. Again, soundchecking the amp was a breeze – the two-volume thing worked a treat and we kept the EQ the same as the previous night.

During the gig, the amp was again a joy to play. Islington Assembly Hall is quite a large room and my position on stage was quite near the left front-of-house speakers. I could hear the band in the room and the guitar seemed to really find its own place in the mix.
The only thing that caught my ear was my Fulltone ’69 MkII fuzz felt a little underpowered at times during the show. I thought I had felt this in Bristol, but wasn’t completely sure. However, in London there was again something not quite right.

It’s a germanium fuzz, so it’s sensitive to temperature – and stages tend to be pretty hot during a gig – but the ’69 has always been quite stable compared to other germanium fuzzes I’ve used. I’d never noticed this with other amps – including the cleanest of Fenders.

Maybe the DeVille ML is so sensitive to pedals it brings out subtle things that would otherwise go unnoticed. Who knows?! I definitely felt it. It wasn’t that the Fulltone didn’t sound good – it sounded great, and it’s my favourite germanium fuzz by a long way – but it felt as if it had a little less gain than I’m used to. It was fine for the most part, but some of the songs required just a little more. 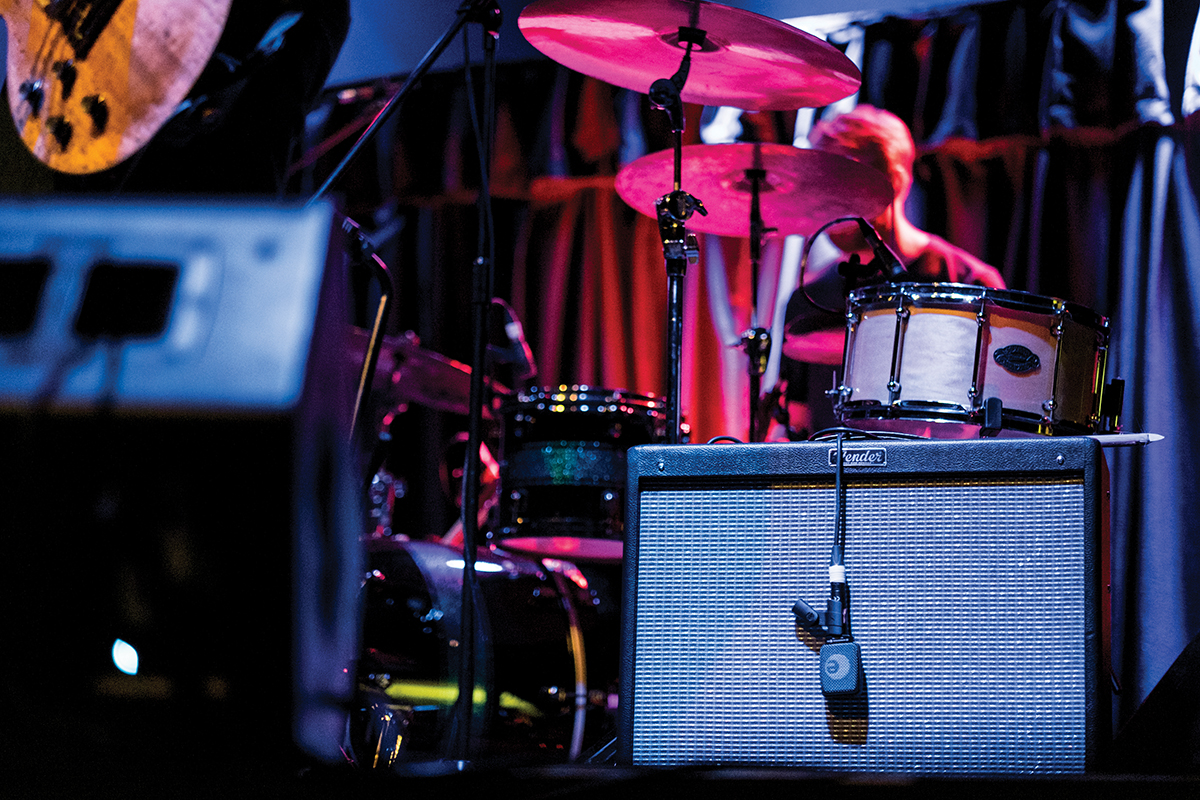 For the third gig, in Leicester, I swapped out the Fulltone for a newly acquired fuzz of the Big Muff type – a Fredric Effects Green Russian, a pedal I’d ‘accidentally’ bought from the Fredric Effects eBay shop a few weeks prior to the tour.

On stage, the combination of the DeVille and a Muff-type was glorious and gave me exactly the fuzzy sound I was after – a huge thick noise with plenty of bloom and grit. The Green Russian also had just the right amount of mids to combine with the amp.

With some amps, I find using fuzz pedals can be a tricky – as soon as the fuzz is on, your guitar disappears behind the rest of the band, especially with some Fender amps due to the way the midrange works. Fortunately, I found the opposite to be true here. When the fuzz was on, it was most definitely on – front and centre, ripping the Universe to bits, as fuzz pedals are supposed to do.

The tour continued, and every night the Fender gave me exactly what I needed. It responded to my playing in a really intuitive way, sensitive to pick attack and the subtleties of quiet passages, and I could really coax out the ebb and flow of the music.

When smashed with the full force of the heavier parts of our set, it just exploded into life, and at no point did I feel as if I was getting lost in the mix of the band or overpowering anything.

This is probably reading like a review filled entirely with glowing positives. I hear you cry, ‘Where’s the balance?’. Well, the truth is I don’t have anything negative to say about this amp. The original DeVille is an amp I don’t get on with. I’ve tried it numerous times and each time I’ve failed to make it work for me.

This is, of course, still a DeVille, but the changes made to it: the speaker, the upgrades to the clean channel, the removal of the master volume and whatever else Fender and Michael Landau did have resulted in an amp that I can truly say is the most pleasing touring amp I’ve used. If you use pedals to shape your tone, and you want the classic Fender clean sound, this is without doubt the amp to try first. 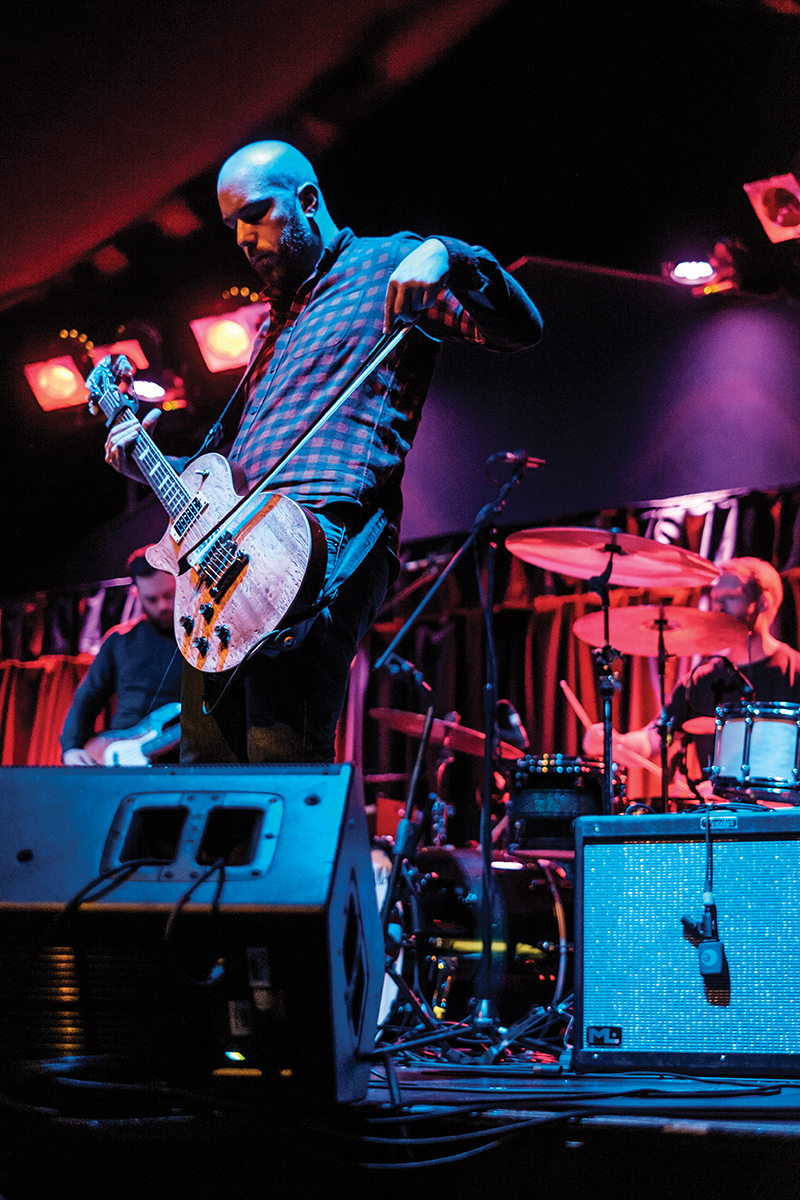 The final gig of the tour was a sold-out show up north in our native Newcastle. It was a little sad that it was the last one, but I was very pleased with how things had gone.
When your guitar sounds good to you, and you’re confident the noises you’re producing with your set-up are the ones you’d imagined, it makes playing live the amazing experience it’s supposed to be. After the final unloading of the gear back at our rehearsal room, I checked the amp… no scratches.